[Say hello to William Byrd. William is an established car writer type dude with bylines on Right Foot Down and Oversteer by Autotrader -KK]

Many of you in the Hooniverse community are wondering why you should give a crap that the Ford Mustang GT is offered with an automatic transmission? Others are wondering who the hell I am. Both fair questions to be sure.

The latter is fairly inconsequential, just know that some years ago I convinced a bunch of foolish automakers to send me new vehicles to drive for a week. They drive them to my house with a full tank of gas, and after a week, take them away and leave a different one. I’m not sure if that makes me any more credible to talk about why you should care about this 10-speed automatic-equipped Mustang than the next guy, but I’m going to give it a shot. 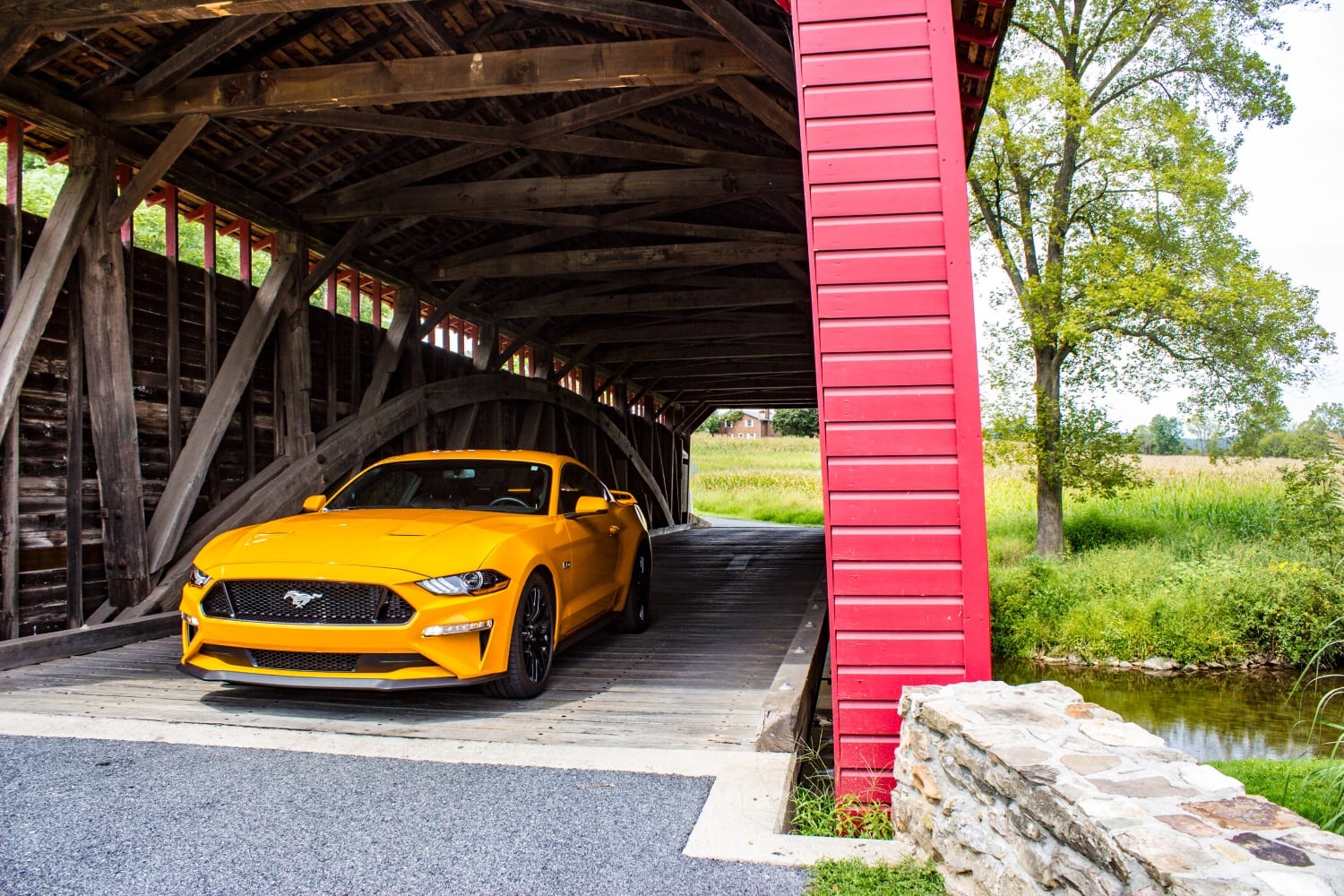 So I’ll put this out there right away, I love Mustangs. I’ve owned half a dozen over the period of a couple of decades, and all of them were fantastic cars in different ways. I like to think that my journalistic training, such that it is, has built in a protection against automatically saying that things are good or bad without giving them a chance. For example, I’ve driven Camaros and said nice things, so that should basically prove that I can overcome bias. 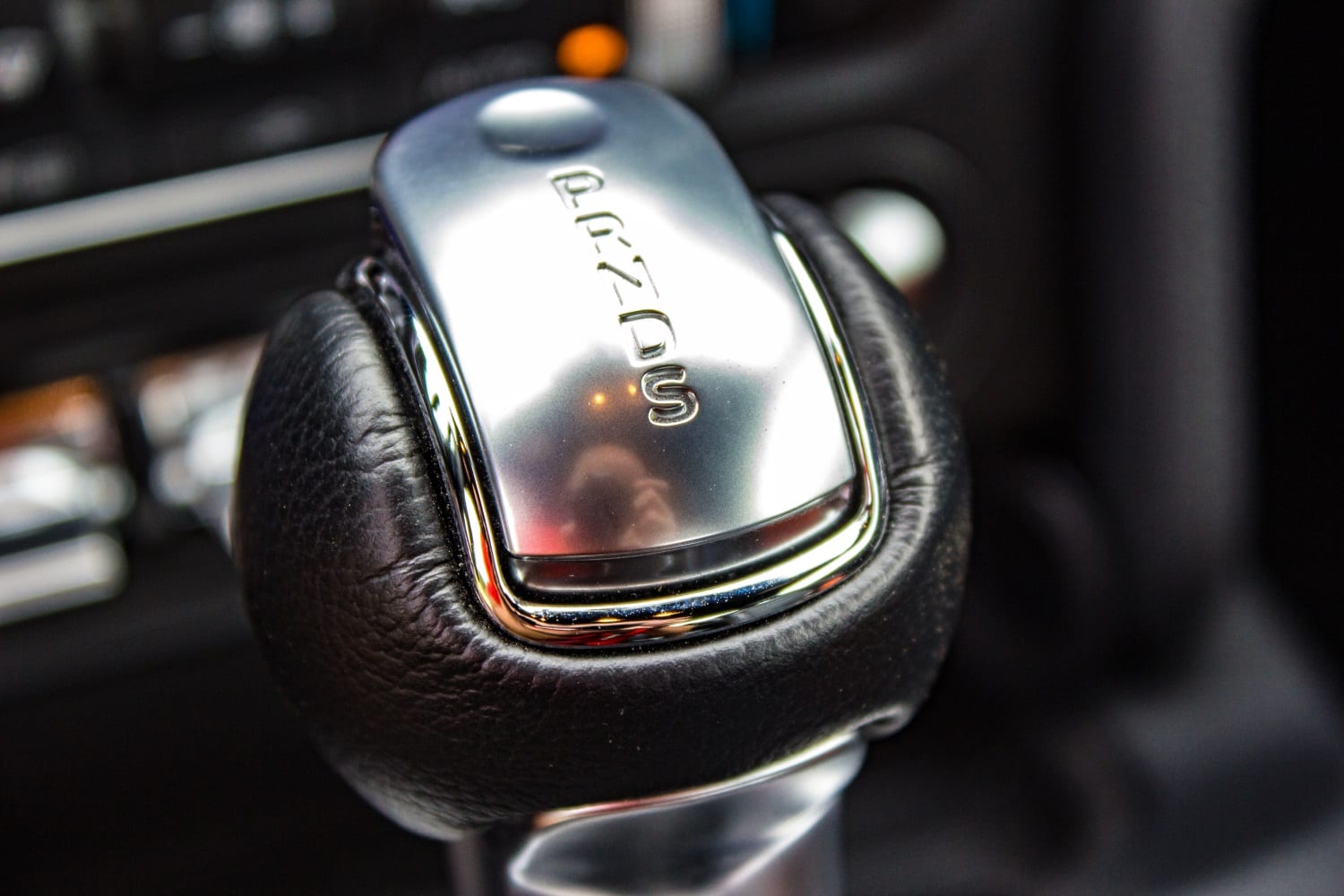 I have actually never driven a recent Mustang GT with an automatic transmission until now. I wasn’t even positive what spec GT I was getting until I saw it rumbling down the road. Actually I heard it first, more on that later. Once it came into view, majestically cresting the neighbors Prius, the “Twister Orange” paint (a $495 option) delivered a pretty great first impression. My second impression was that it had the wrong transmission, equipped with Ford’s 10-Speed SelectShift® Automatic Transmission (another $1,595). So while I love Mustangs, I generally dislike automatics. As one should.

So there were multiple biases, but they were both good and bad. The week I spent in the Mustang took me to some cool places, including one pretty special location, at a special time. So let’s get started.

Automatic or not, it’s hard to argue that this is a really good looking car. Unless you are a die-hard Dodge or Chevy guy. In a sea of grey and black, my week with the Mustang was one of overt extraverted’ness. It’s impossible not to notice this car. It looks like a school bus, at least in paint color. Side note for the parents, our Recaro child seat will fit relatively well, it just reduces the already limited rear seat headroom. So hopefully your kid is short.

The Performance Package ($3,995) helps the aesthetics as well, adding exterior features like 19-inch x 9-inch front and 19-inch x 9.5-inch rear black aluminum wheels plus a slick looking spoiler. The orange and black scheme may be reminiscent of the Great Pumpkin, but I dig it. 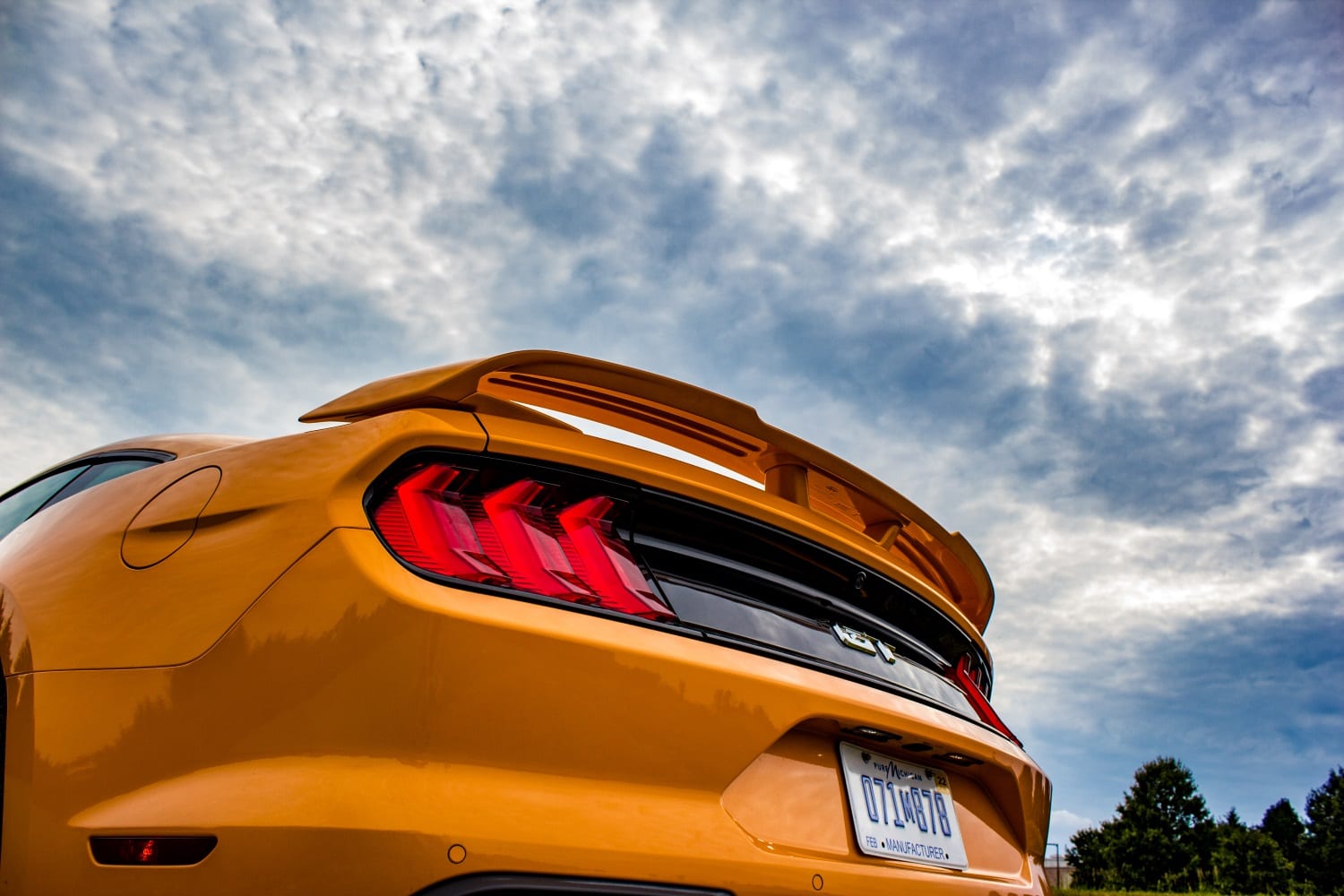 No Longer Crappy on the Inside

If you haven’t driven the latest generation S-550 Mustang, you’re missing out on one of the best tricks Ford has conjured up – the Mustang has a pretty nice interior now. And I say that as a former owner of third, fourth, and fifth generation Mustangs. I made regular excuses for why the plastic surrounding the door pull in my 2003 GT didn’t quite snap into place. My buddy said “I don’t think it’s supposed to be like that” as he accidentally pulled it further out. It never quite snapped back in after that, thanks jerk. 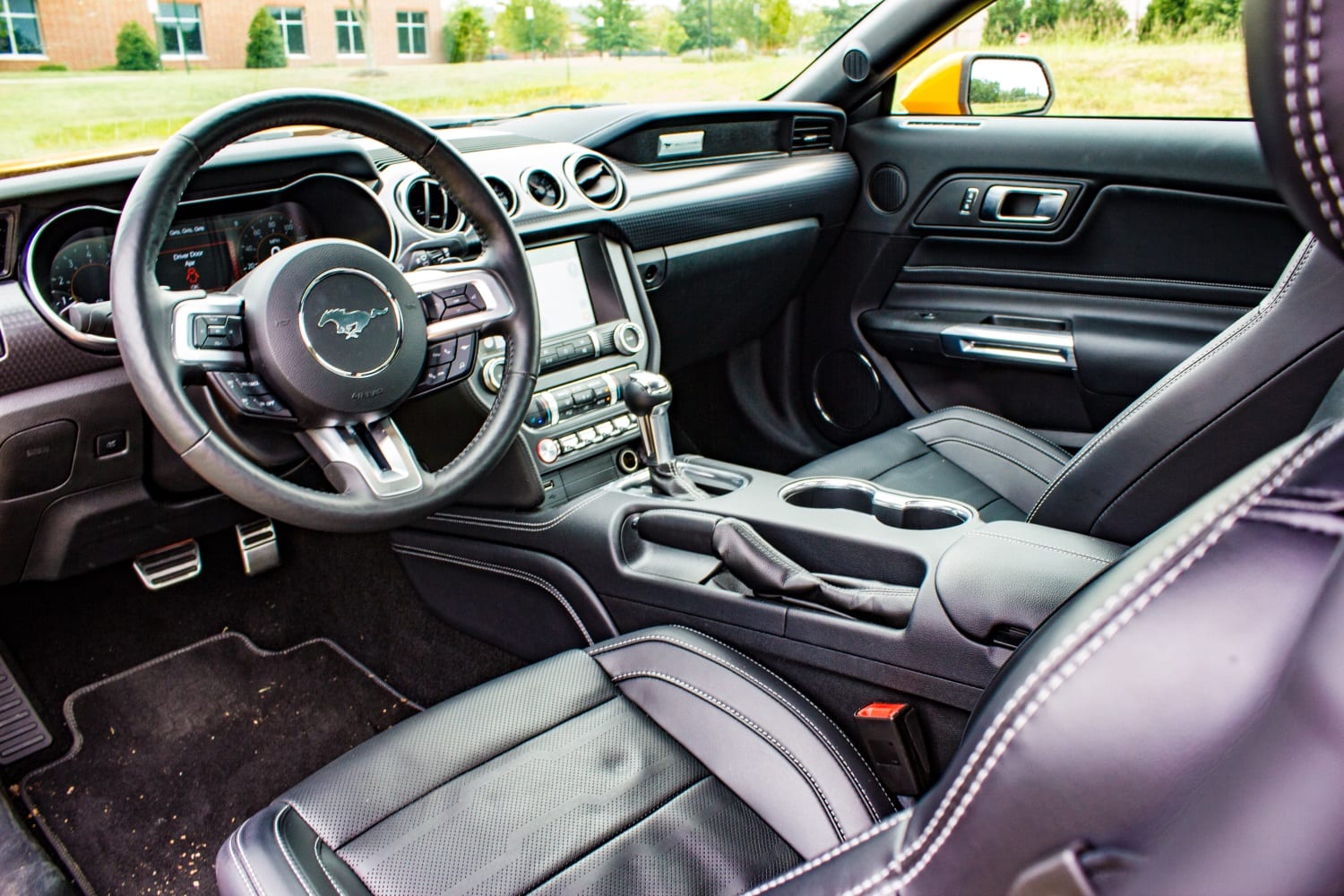 But even for a $50,000+ car, it still has a pretty nice interior. There a few little touchpoints that I wasn’t a fan of. For example, the plastic used for the paddle shifters feel a little cheap; and for a performance car at this price point, I want something that at least feels like imitation metal. The other materials on the interior are pretty solid.

They did a great job with the various interfaces though. I like how there are small details on the screens; the paddle shifters pop out to greet you when you crack off a shift in real life. For some time now, Ford has done a great job emulating Nissan with all of the “track apps” and settings, and it’s continued to improve. You definitely feel like you can customize your Mustang experience.

Unfortunately, like just about every other recent experience I’ve had with Apple CarPlay, as soon as I plug it in my iPhone it basically says “Oh, I assume you’d like to listen to music on your phone, off we go!”. When no, I was just trying to get Waze to show up on the screen while listening to the radio. I grew tired of having to turn Sirius/XM back on and re-tune into the station I was listening to. It’s a multi-step process that you can only accomplish via the steering wheel controls.

The seats are fantastic, a nice mix of comfort and stability through the turns. The last Ford that I owned personally, a Focus ST, had the fantastic Recaro seats. This was a slightly cushier version of those trimmed in a nice multi-adjustable leather. Overall I had few complaints about the interior. My 12 year old daughter, eternally stuck sitting in the back while her 6-foot tall brother sits up front, wasn’t as amorous about the Mustang’s small back seat. Still, she liked it a lot better than the sea of crossovers that show up at our house.

Every Mustang I have ever bought, I bought for the overall driving experience, the sights and sounds, not because of some namby pamby interior decision. If you want a fancy interior, buy one of those dang German cars! Just kidding, so what’s it like to drive? 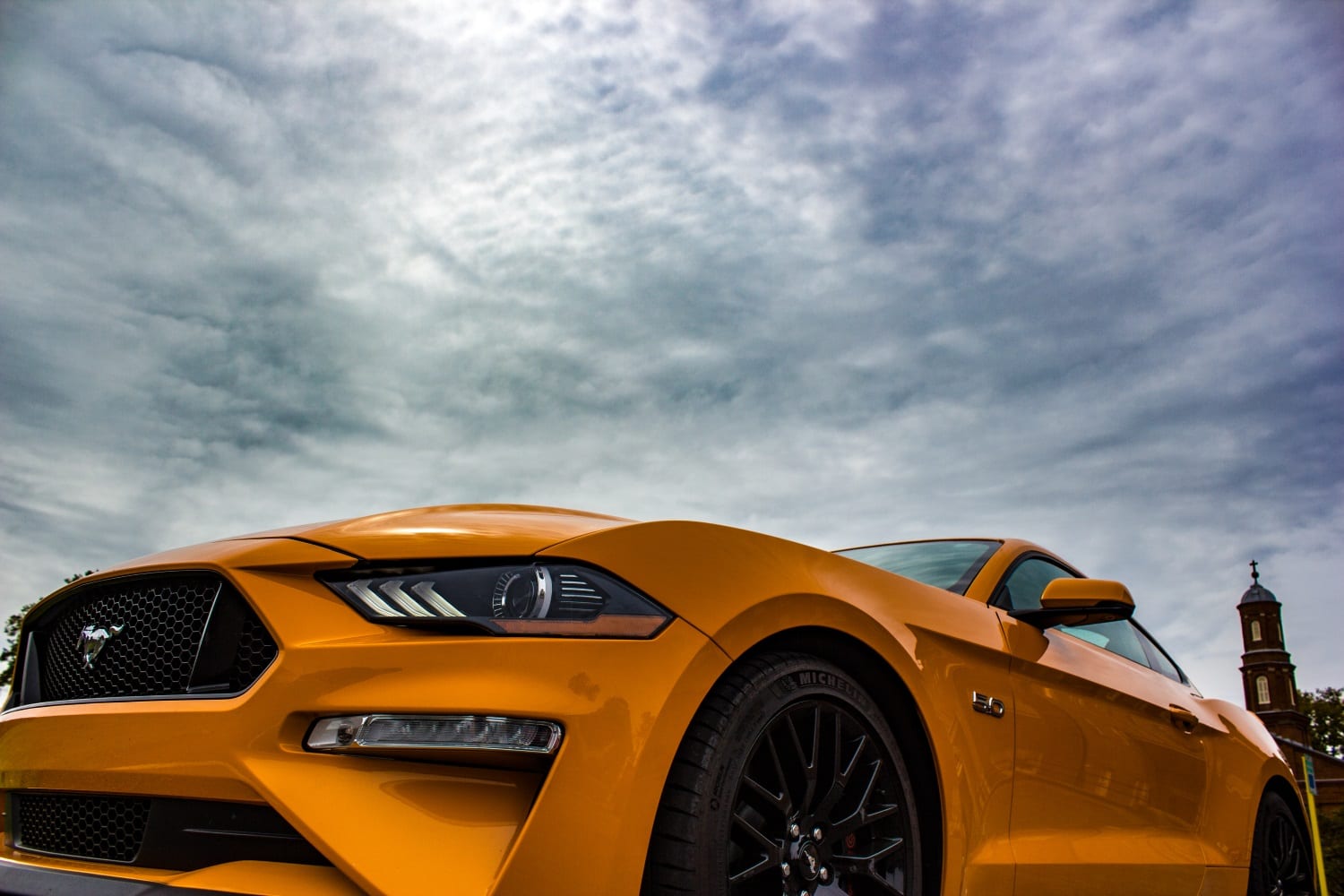 It’s mostly like driving a GT with the manual, but with a bit less control over what gear you are in. I’ll pause for the “thanks Captain Obvious” reaction. The more you drive it, the easier it is to adapt to, but there were definitely times where the transmission was hunting for a single gear like a parent who lost their toddler in a ballpit. There are ten gears available, so a few times I waited in annoyance while it sorted things out.

The shifts are a little jerky in Sport+ mode, which is probably the mode I spent the most time in. I’m not sure if that was intentionally done by the Ford engineers, many performance cars that I’ve driven tend to have a harder, more abrupt, shift depending on the mode you’re in. The very first time I was driving the car spiritedly in full automatic mode, I hit the brakes to round a hard right turn and it rifled off three quick downshifts like a damn race car. Cool. Generally in Sport+ the Mustang drives like I do, which is to say a little bit like an asshole.

Around town, downshifts can seem like random decisions by the computer when in stop-and-go traffic. It was definitely enough to make a BMW 335i owner get on the throttle a little bit because he thought I was revving at him. Doesn’t take much, you can pick your own stereotypical “easily provoked” owner out there to place in this scenario.

Ford’s “Active Valve Performance Exhaust” is pretty magical though, it’s a $895 option and is worth it all day long. I’ve paid that much, or more, for a custom exhaust on a previous generation Mustang that didn’t sound any better. It also has the trick “quiet start” mode where you can set the car to start with less bravado during certain times of the day. I know my neighbor has a pretty young kid, so without that feature there would have been a few 7am starts where I might have felt slightly guilty for rattling his windows. Or not, who knows.

At full chat, the upgraded exhaust in Sport+ mode sounds like a symphony of death metal bands going for some sort of death metal world record. I’m not sure which record, but it has to do with being loud and brash. I’m sure I annoyed people over the course of my week with the Mustang, especially in tunnels, or basically anywhere that I could get sound to reverberate.

The Mustang has also long since shook the reputation that it can’t handle curvy roads or racetracks. This test car came with the $1,695 MagneRide® Damping System, which is the first time I’ve experienced it on a new Mustang. It delivers a confident experience while driving fast through twisty roads, I always had it in the back of my mind that the 460 horsepower and 420 lb.-ft. of tire-squealing torque might decide to overrule the suspension and make us face the other direction if I put my foot in it too much. I’d love to try this on a track, maybe next time.

Oh and the Brembo’s stop quite well. As Brembo’s do. 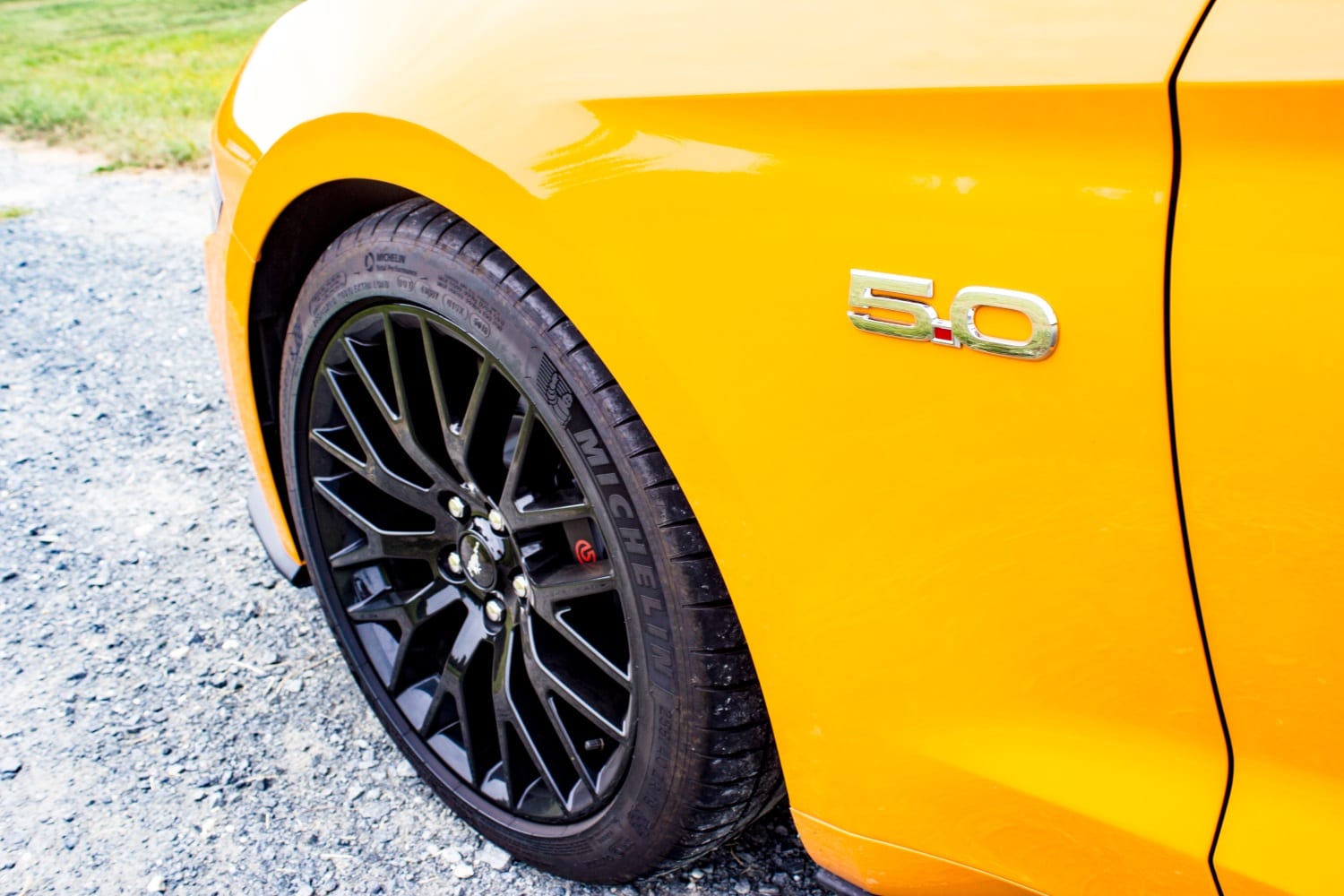 LIke most journalist-types, I usually try to find a good location to take photos and experience the car. Since it was painted the color of an emergency vehicle, I was lucky enough to make a stop at the National Fire Academy in Emmitsburg, Maryland. 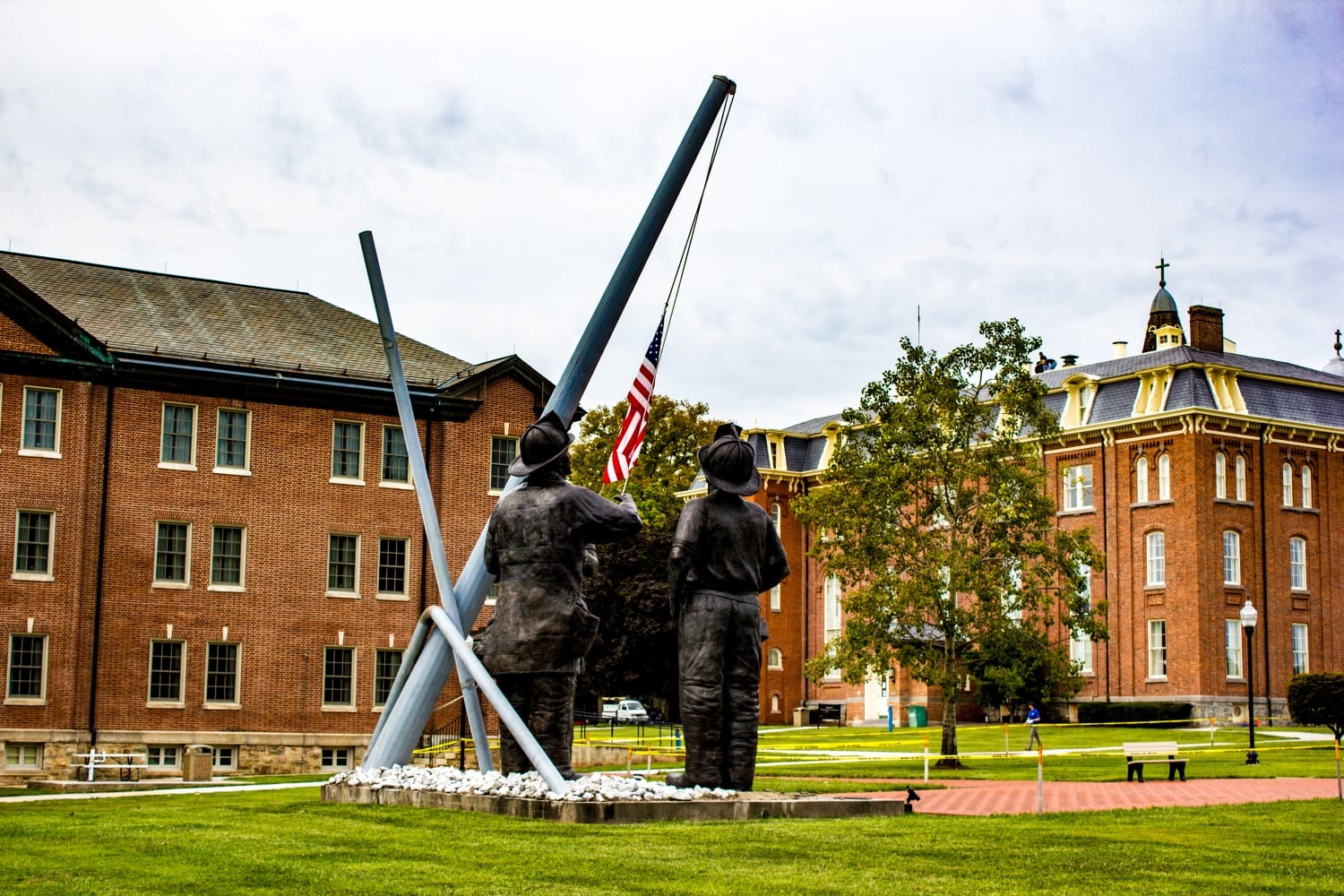 It happened around the anniversary of September 11th, which is always a somber day, particularly in the D.C. area. Of the 2,977 victims killed in the September 11 attacks, 412 were emergency workers which included 343 firefighters. Quite a few more have died since then from health issues from the working conditions in the aftermath of the attack.

I’m not going to try and trade on that awful event for clicks or likes, but I enjoyed the visit and appreciate the opportunity. Here are a few pics. 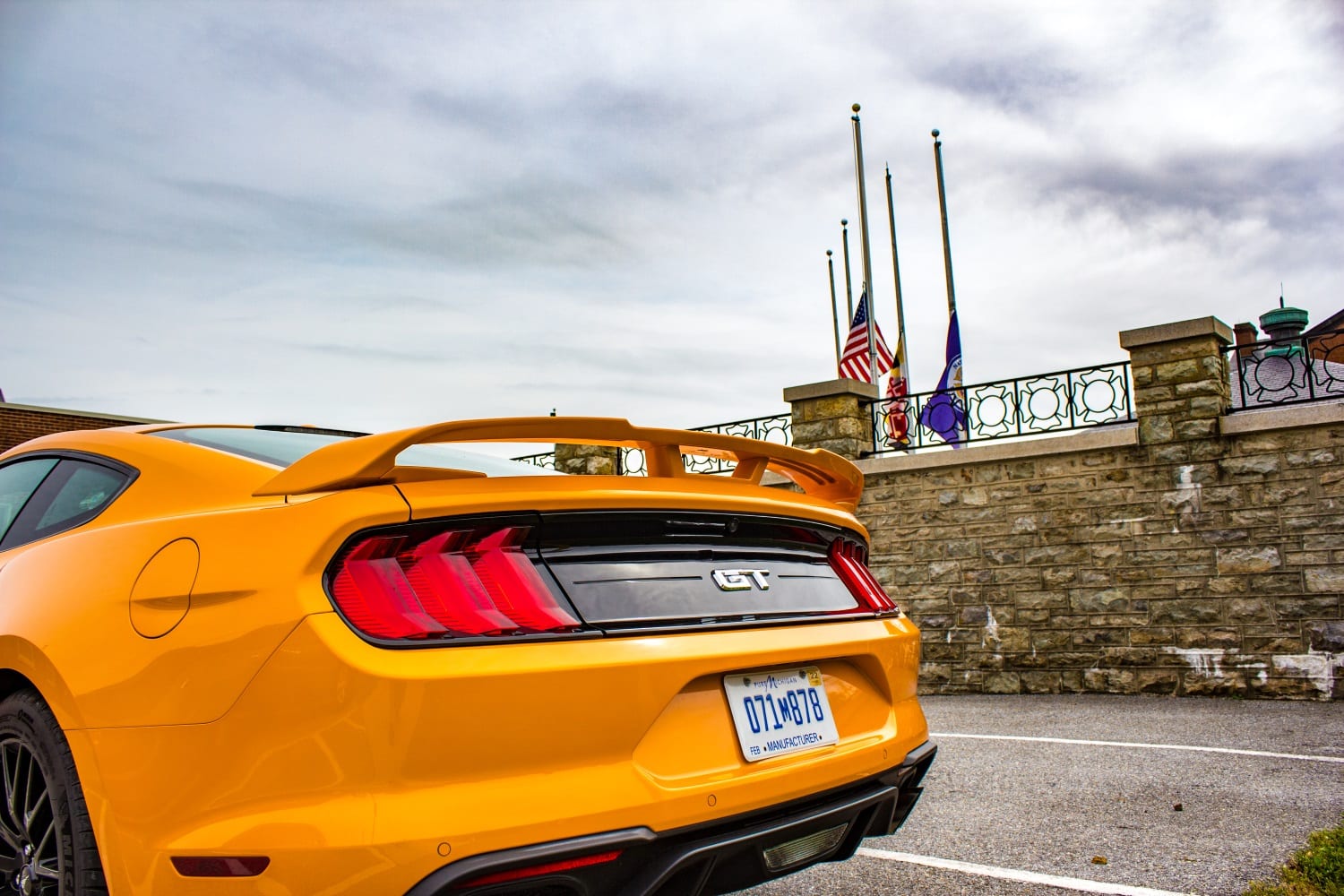 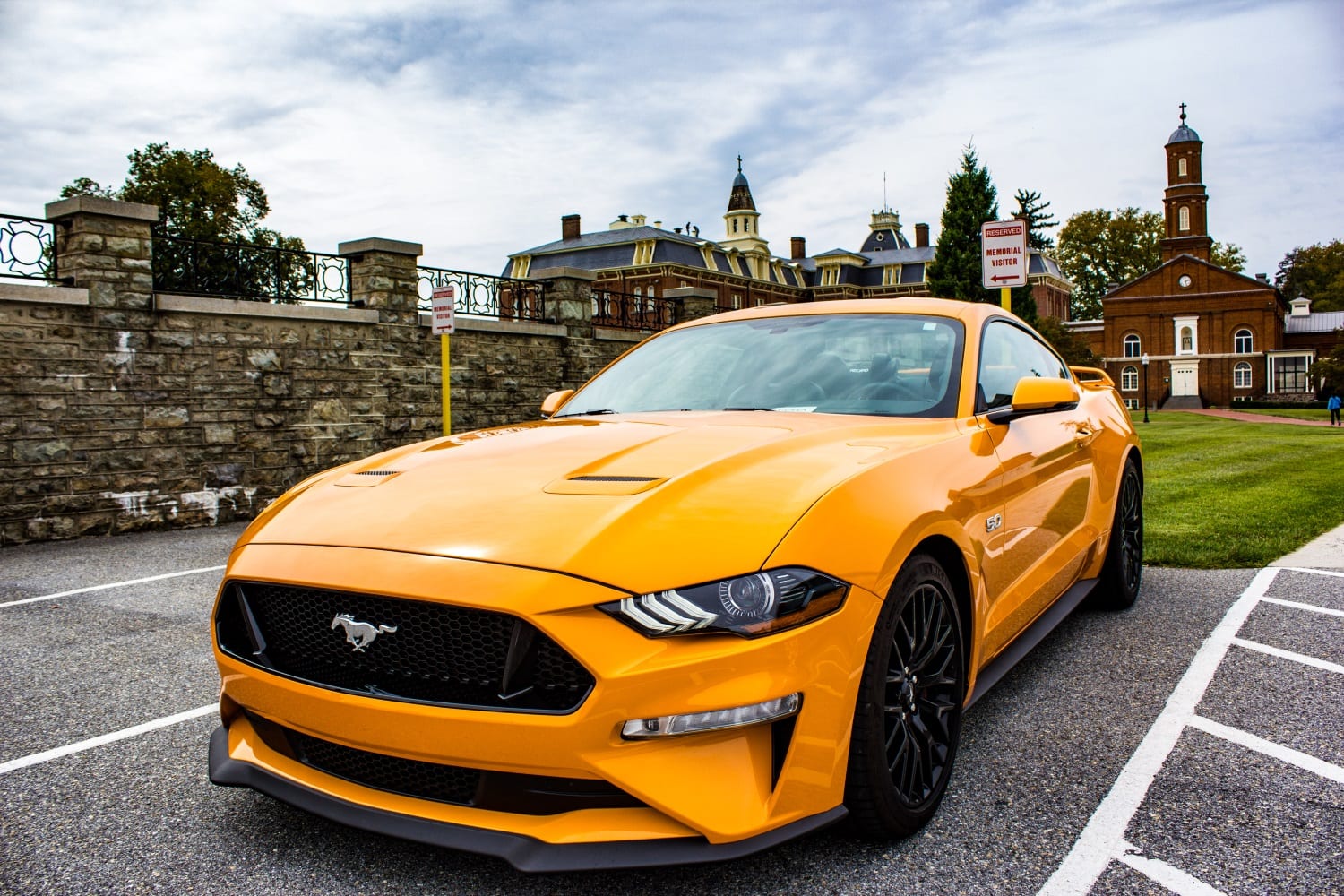 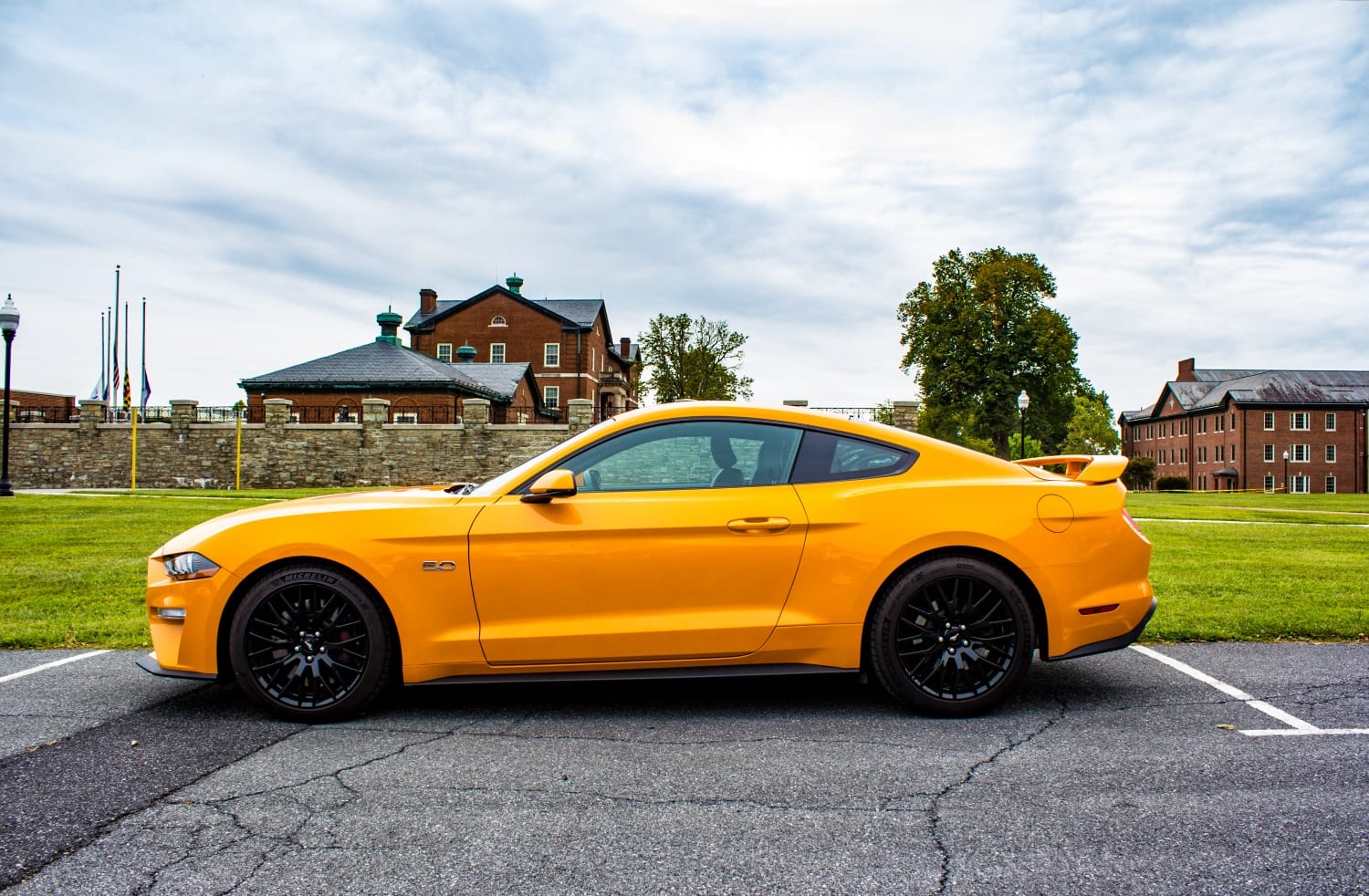 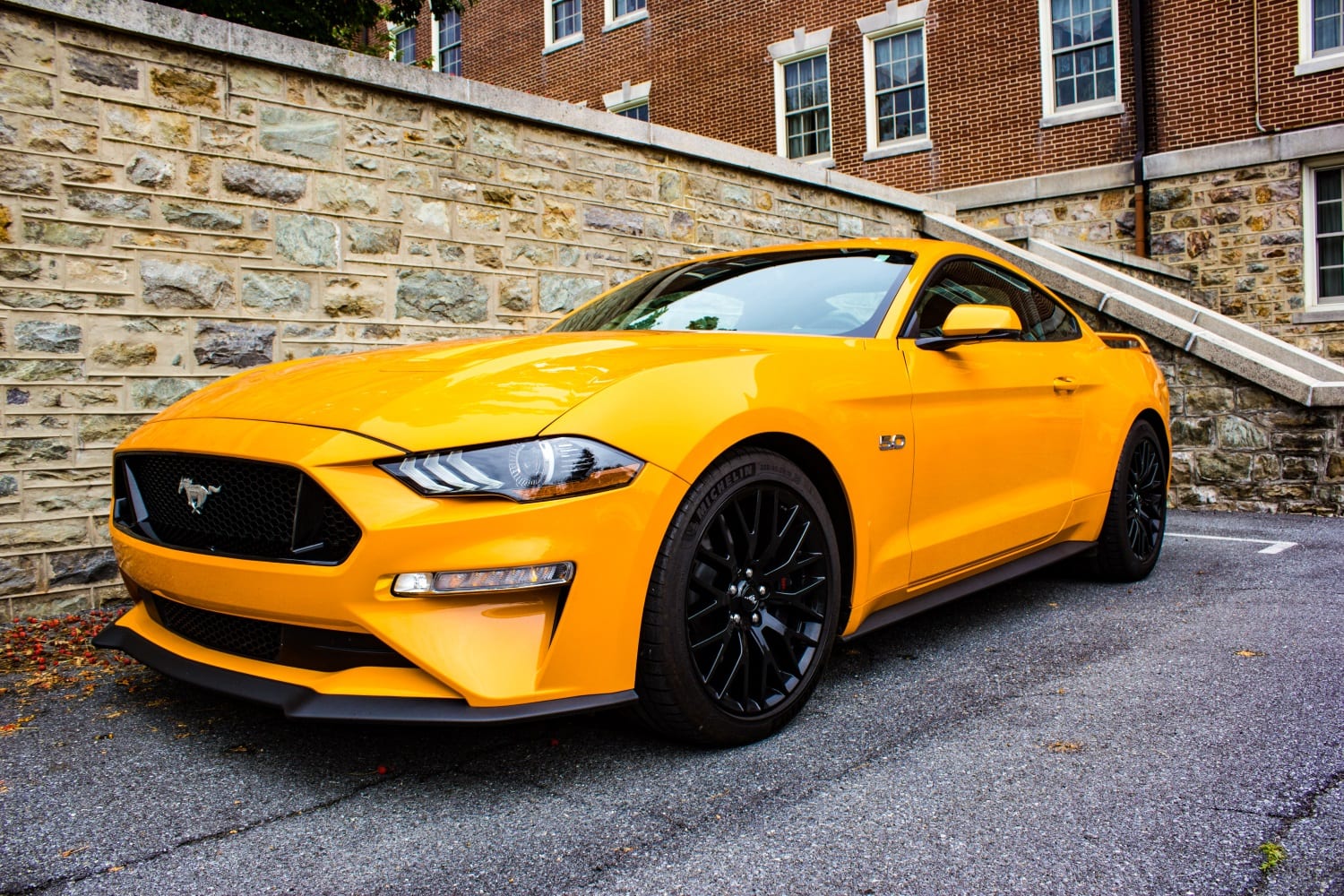 I was tempted to call this “Driving a Mustang with an automatic, embracing the heresy” but that seemed a little dramatic. Instead, I had to wonder how many enthusiasts wouldn’t give this car a second look on a dealership lot. The notion that muscle cars have to be manual has been somewhat debunked already, with the competition down the road from Chevy and Dodge both coming to market with automatic transmissions even in their highest spec cars. Plus you have cars like the Nissan GT-R and numerous supercars who only come equipped with an automatic, so it’s not really as much of a big deal as I originally surmised. 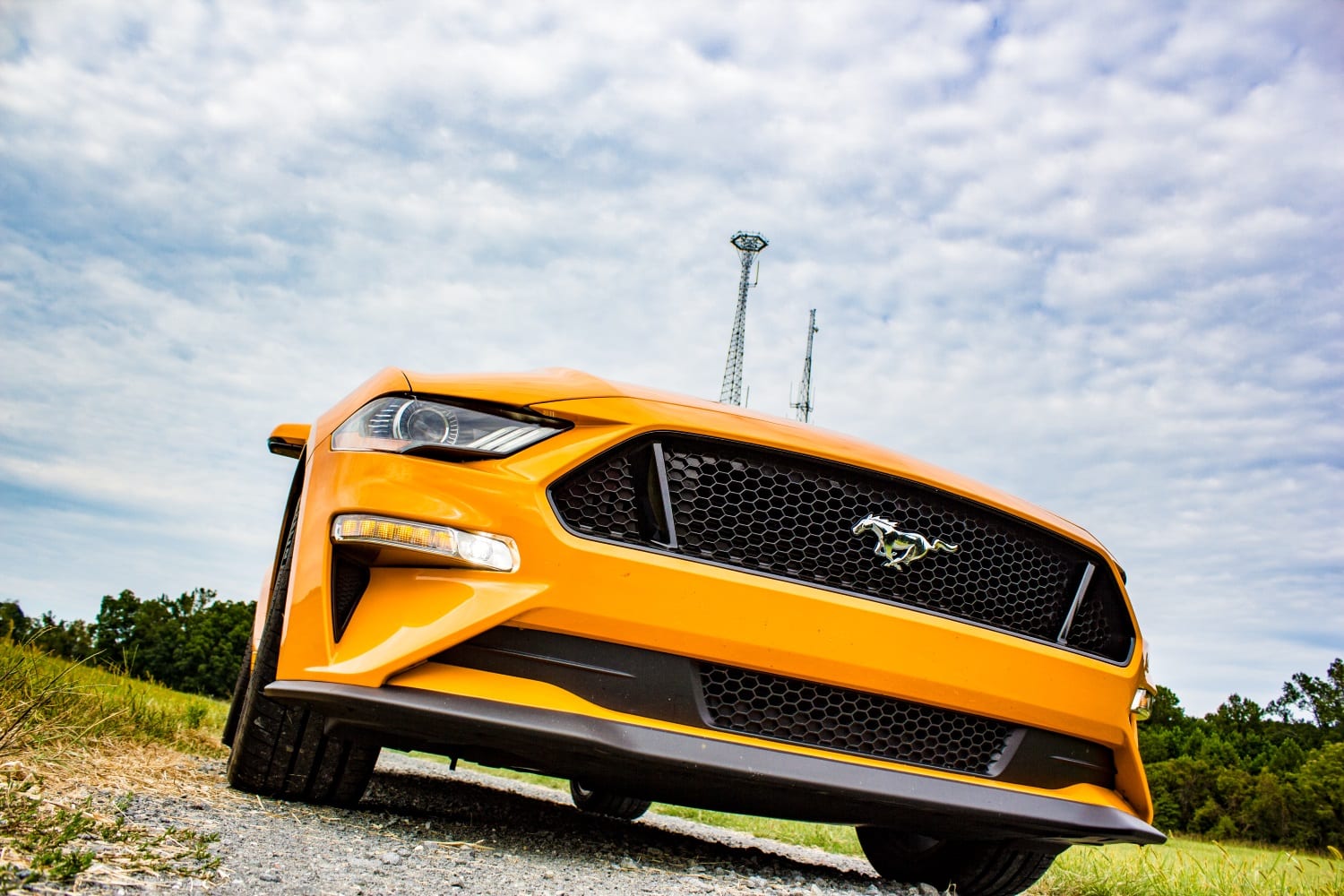 [Disclaimer: Ford lend us the vehicle for the purpose of this review. Images, unless noted, copyright 2019 Hooniverse/William Byrd]