Last year when I drove and reviewed this latest generation of CX-5 I gave it a favorable review as one of the best in its segment. That is, as long as you could deal with the engine, which was grossly underpowered. Of course, up sprung the apologists who claimed that the normally aspirated motor provided better driving dynamics than a turbo motor could. A turbo motor would spoil the “sporty feel” of this crossover. All of it was (and is) pure, unmitigated bullshit.

My colleague Henry Payne from The Detroit News did a review of this very same CX-5 earlier this year and compared it to a vehicle with which I’ve spent a lot of miles and am very familiar — the Audi Q5. Henry’s take was that the CX-5 was a lot closer to the Q5 than it should be, given the price. I decided I wanted to see for myself if Henry was on to something. 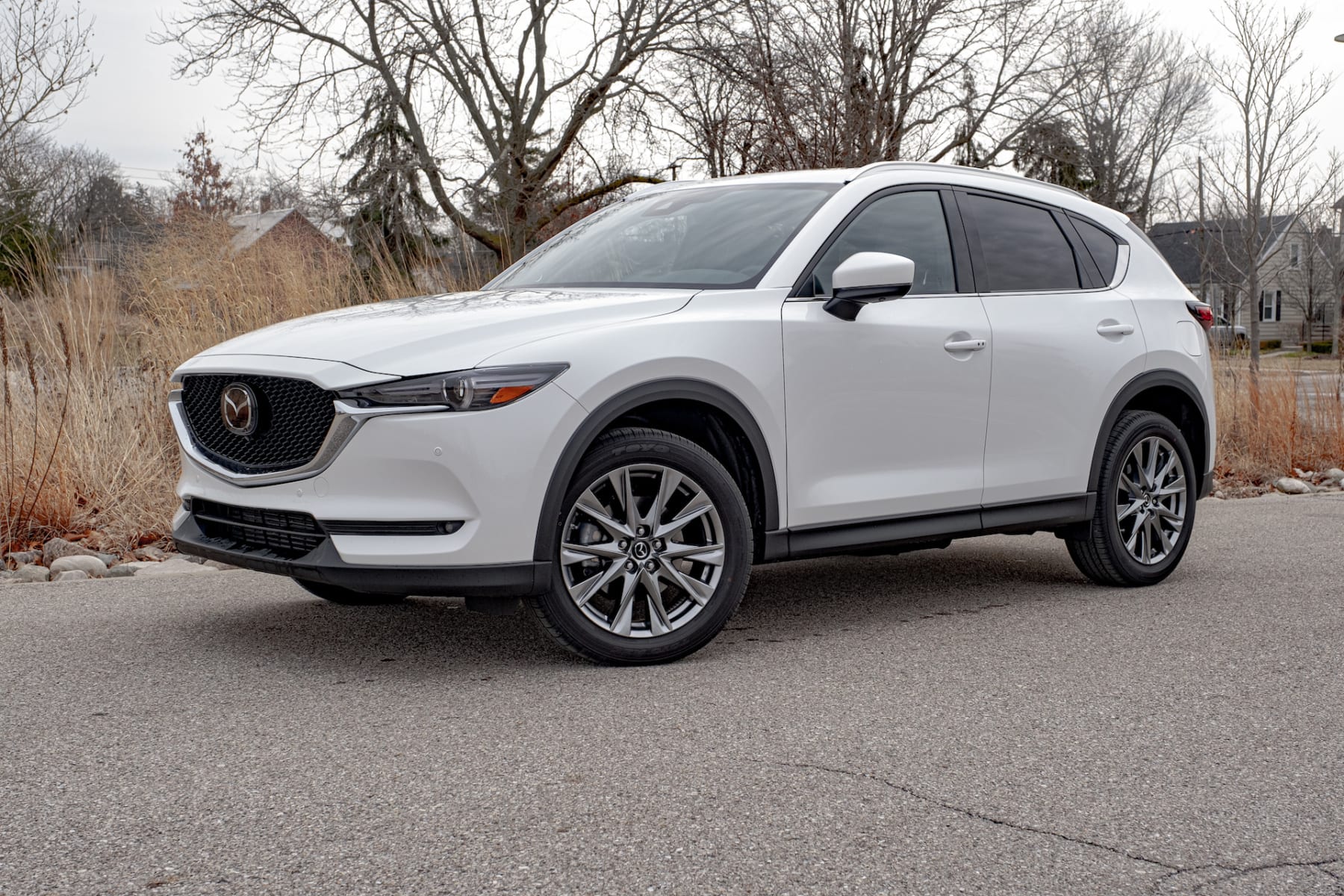 For 2019, one of the last shortcomings of the Mazda CX-5 has been addressed — the motor. New for the 2019 model year is a 2.5-liter turbo four-cylinder engine. It provides 227 horsepower (250 with 93 octane), but more importantly 310 ft/lb of torque. By the way, those are almost the exact power figures of the Fox body 5.0 Mustang from days gone by.

As recent as five years ago, the interiors of Mazdas were not up to the materials quality standard for the class. In 2019, in the higher trim levels, they are among, if not the best, in their class. 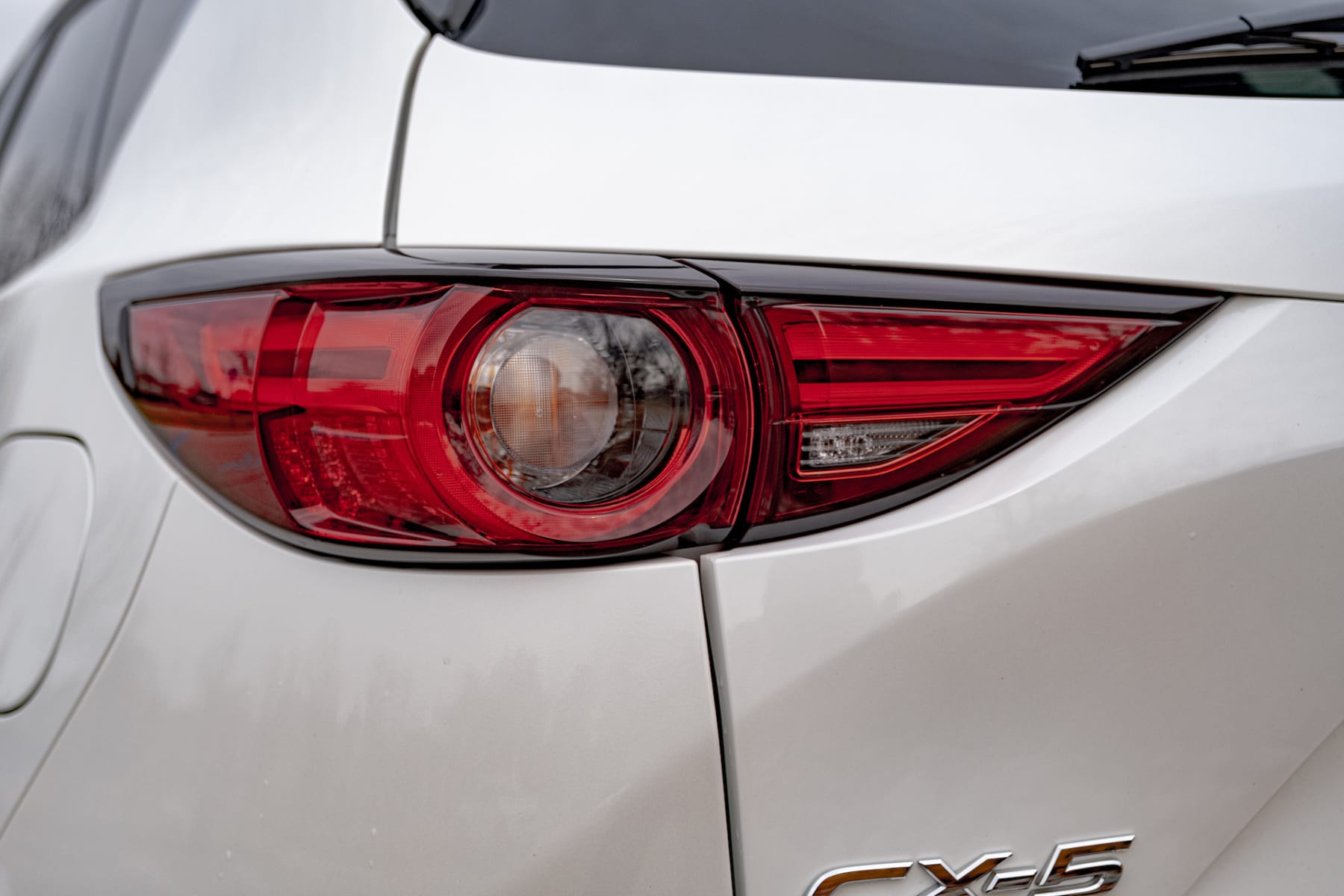 I will state flat out that the materials are not as good as, say an Acura RDX or Audi Q5, but I will agree with Henry on this point, that it is closer than you would expect. The difference between the CX-5 as a mainstream crossover and the Audi or Acura as a near-luxury crossover comes down to the details. Things like thickness and heft of materials, plastics rather than metals for some buttons and levers. 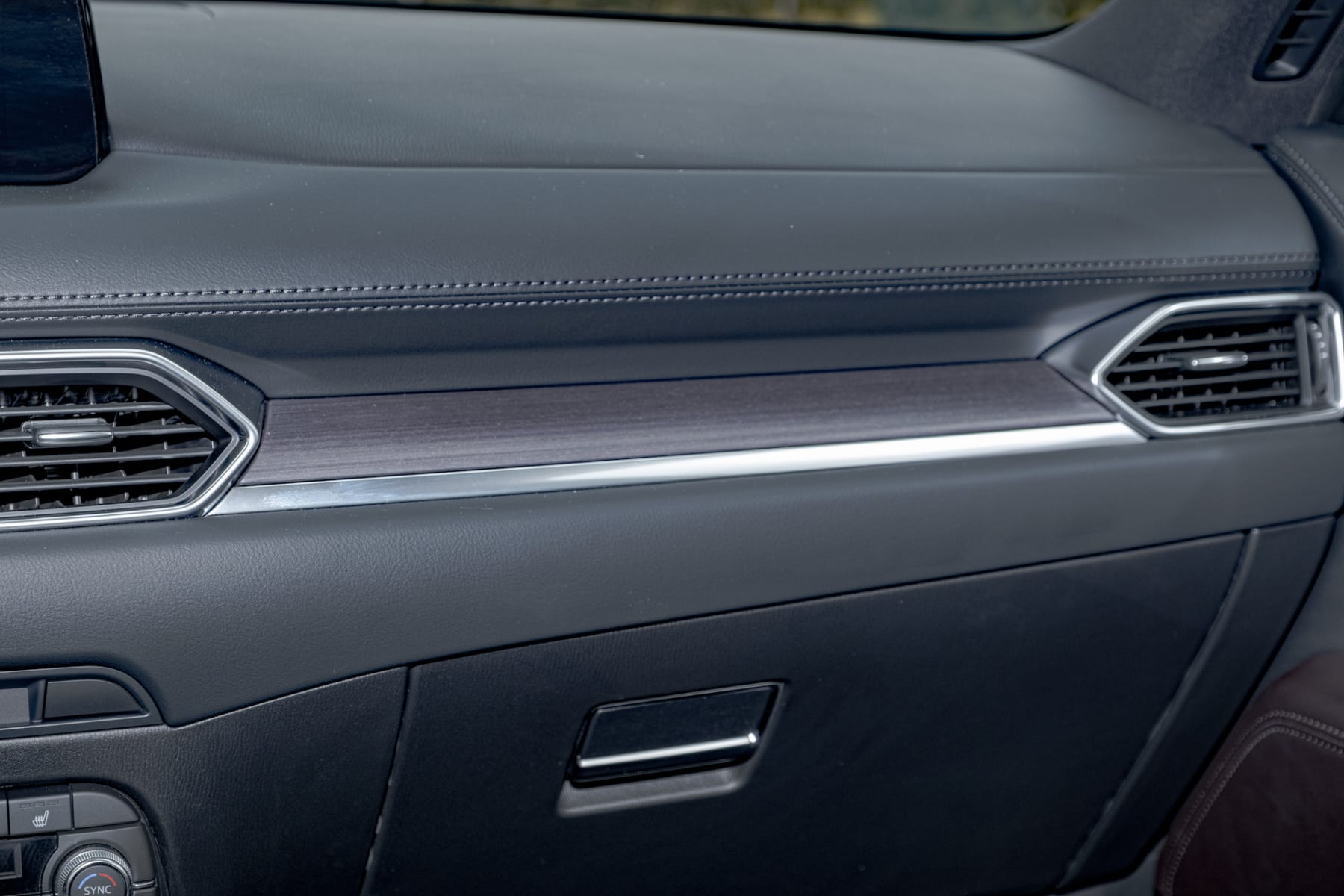 Another example: the steering wheel in the CX-5 is only heated between the 8-10 o’clock and 2-4 o’clock positions on the wheel. The next level up, it is the entire wheel. Details. Small details. 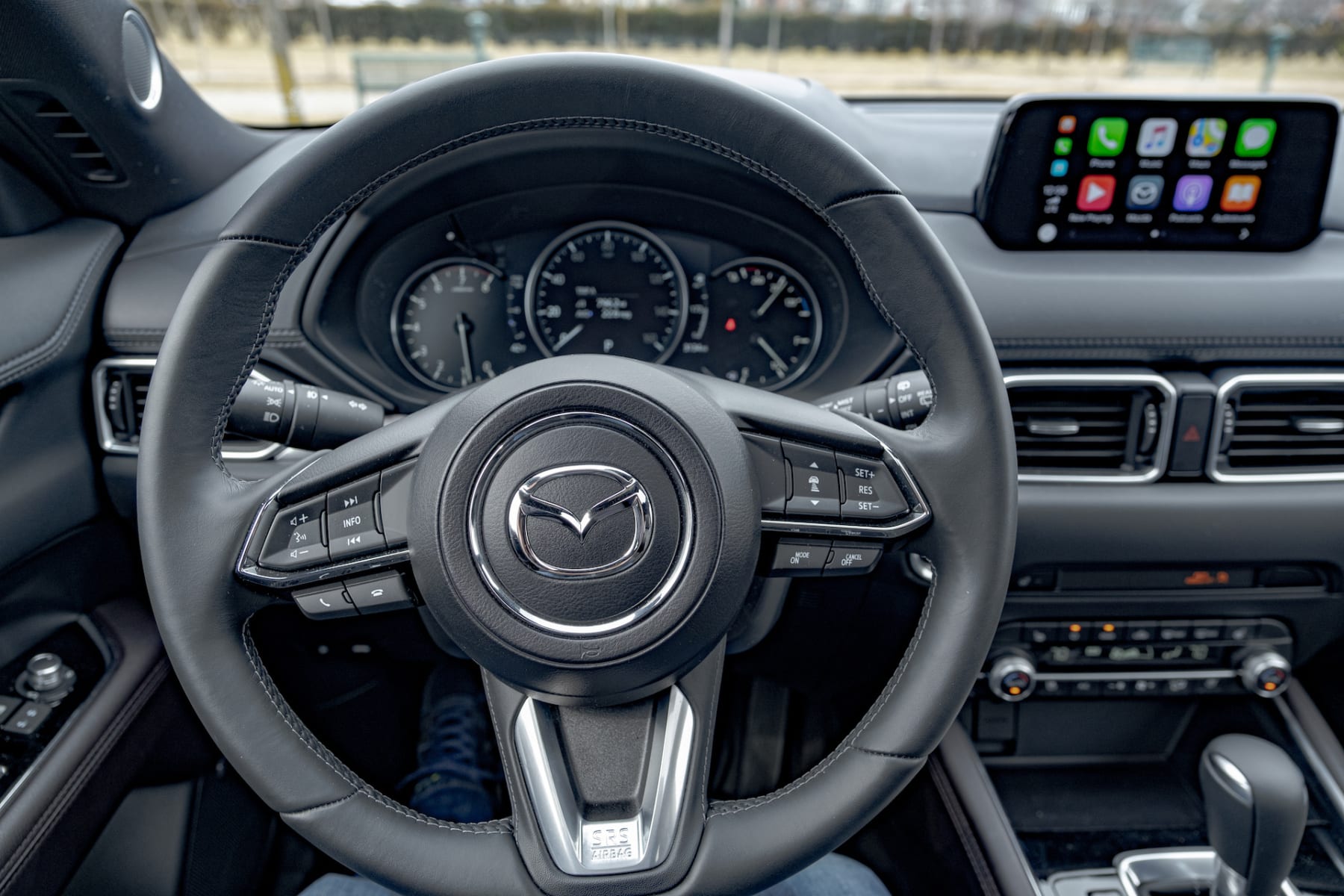 The infotainment system is also a sore spot with me. I have never been a fan of Mazda’s current UI/UX. Yes, after many years and many models I can navigate around it, but it’s not intuitive. It takes more thought than it should to get to different sections and menu levels. The interface is also slow. Slow as in, “is this operating on an Intel 386 chip?”

Sometimes on startup with your phone plugged in it goes to radio, sometimes to your phone. Certainly, it does not default to the last setting, Bluetooth, radio, or USB. As for CarPlay starting up with the phone plugged in, it uses that same random number generator to decide. 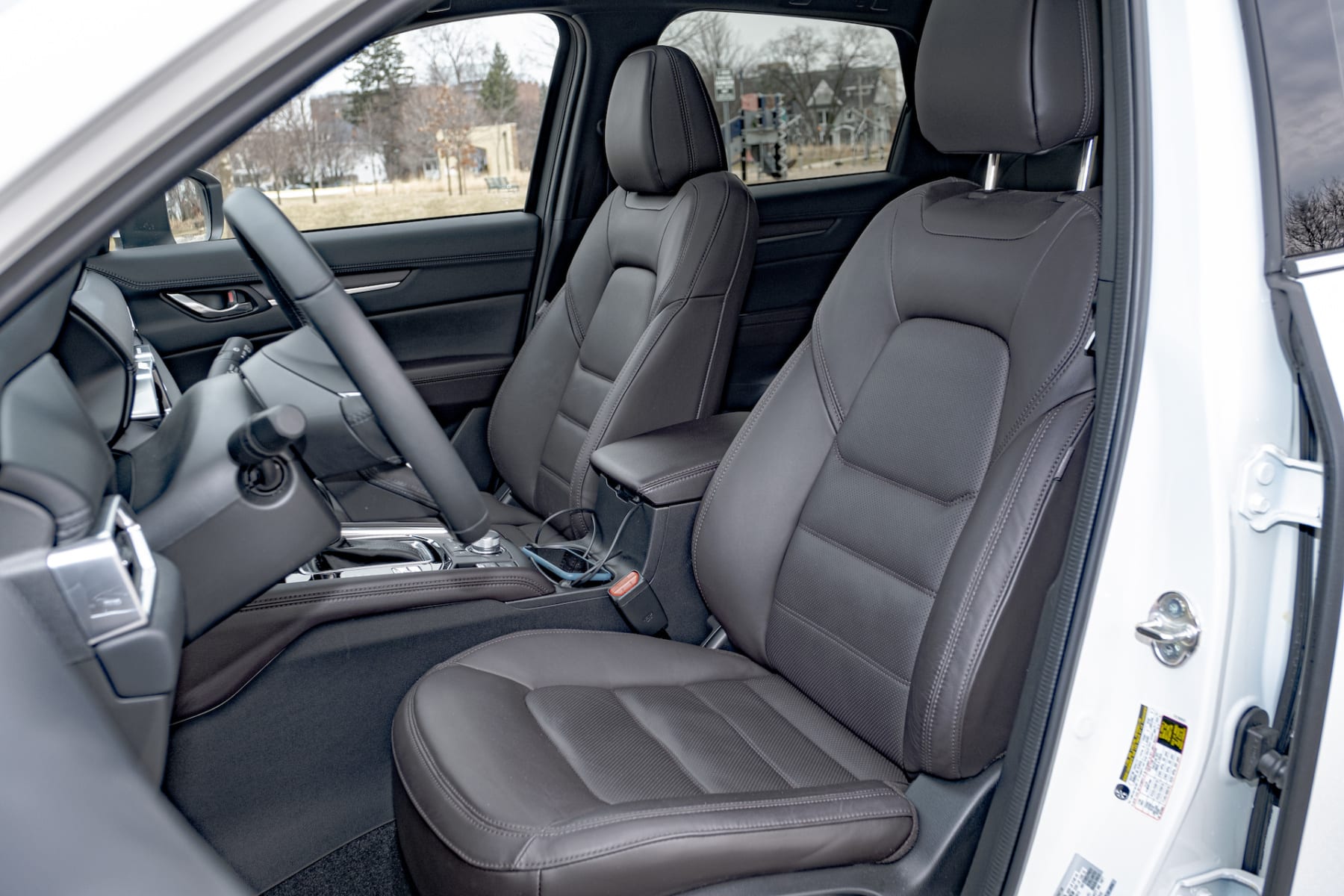 The rest of the interior is very good. Again, for the class, the materials in this top-spec Signature trim is among the best I’ve experienced in this class. My only other gripe is that the rear seats do not fold flat. However, that is a personal thing and not an issue for most people. If you have pets, or you frequently haul large amounts of gear around, it may be an issue.

Suspension tuning and ride quality were very Mazda. In other words, it’s the most European feeling Japanese brand. Firm and controlled without any of the harshness. This is not a sports car or a sports vehicle, it IS a crossover. It just drives like the best crossover short of a BMW X5 or Porsche Macan. 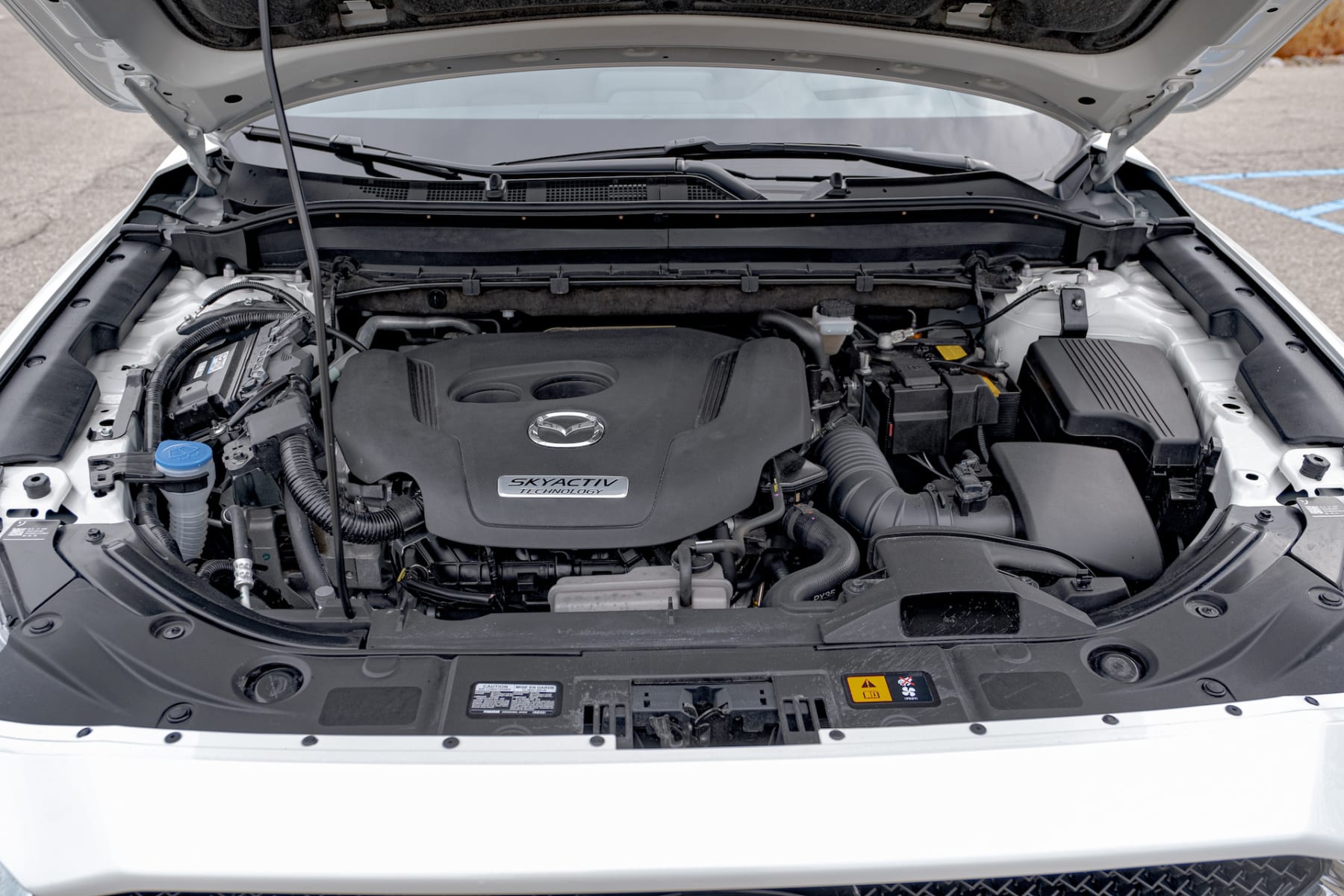 Let’s talk about the engine. This engine TRANSFORMS the vehicle. It takes the CX-5 from a crossover that you have to make excuses for or rationalize because of its lack of performance, to “THIS is the one to buy in the class,” full stop.

You no longer need to think about the gap pulling out into traffic, you just do your best Ayrton Senna, “If there is a gap you must take it.” And take it you can. You are up to speed very quickly. Butt dyno says low fourteen, high thirteen quarter mile times, 0-60 in about six seconds.

The substantial increase in torque from the 2.5-liter naturally aspirated engine makes jamming through city traffic a breeze. The motor is quickly up on boost, peak torque is at just 2,000 rpm. Whereas the N/A motor’s 186 lb/ft of torque (vs 310 in the turbo) is way up at 4,000 rpm. In real world driving, again, night and day differences. 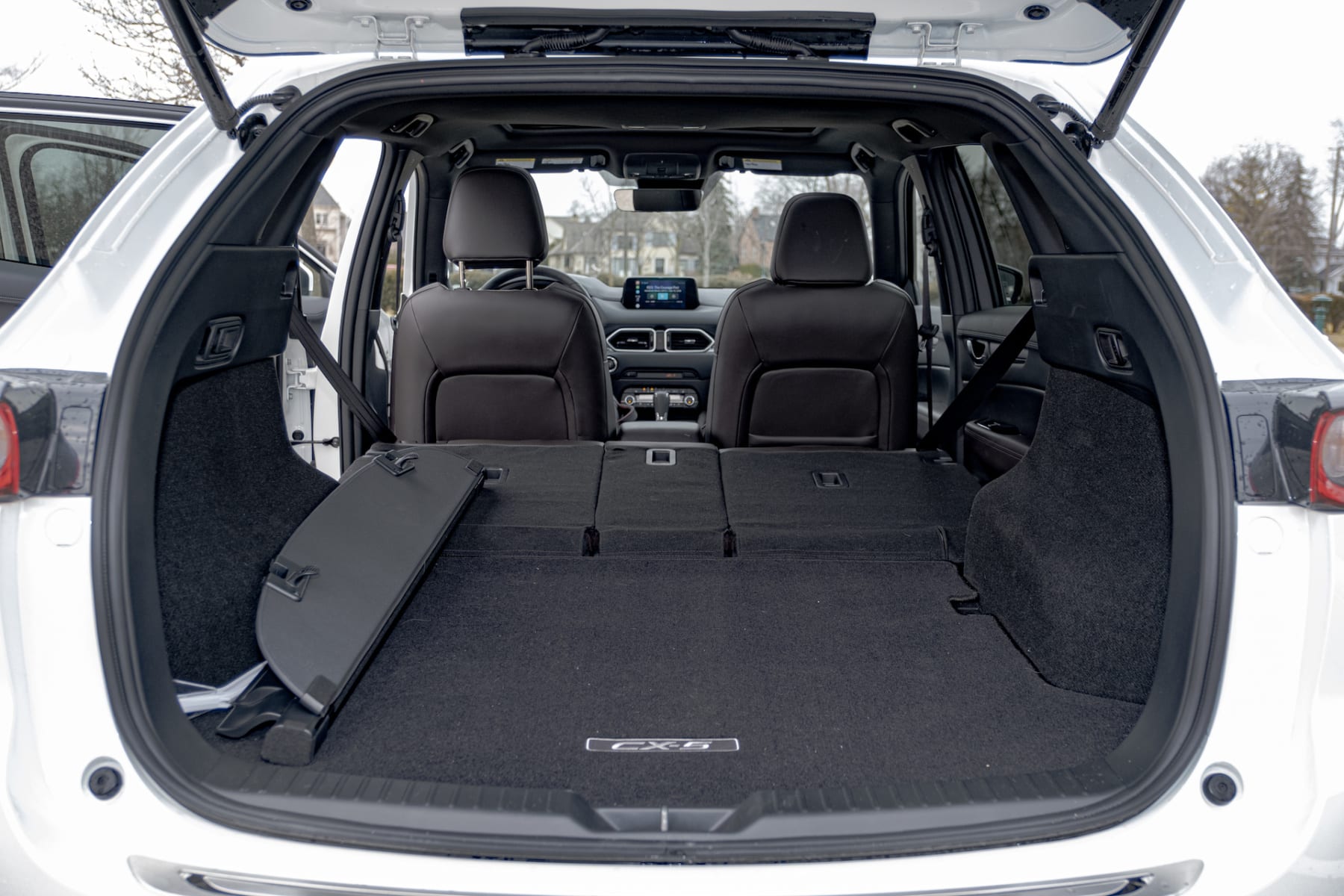 For the extra power and drivability, you will give up two MPG across the board. With this turbo CX-5, EPA rates it at 22 city/27 highway/24 combined. I found those numbers to be spot on.

The sticker price on the CX-5 I was reviewing was $39,330 including delivery. This was an almost fully-loaded AWD Signature trim model. It is fairly priced.

An RDX will run $5000-$10,000 more; the Audi, $10,000-$15,000 more. The Acura and the Mazda end up being close, but if you prefer luxury over “sportiness,” then yes, the Acura is worth the premium. The Audi Q5 may be the best all-around vehicle I’ve driven in the past few years. A ten-hour, five-hundred-plus mile day of driving was a non-event. The Audi is very much worth the premium. 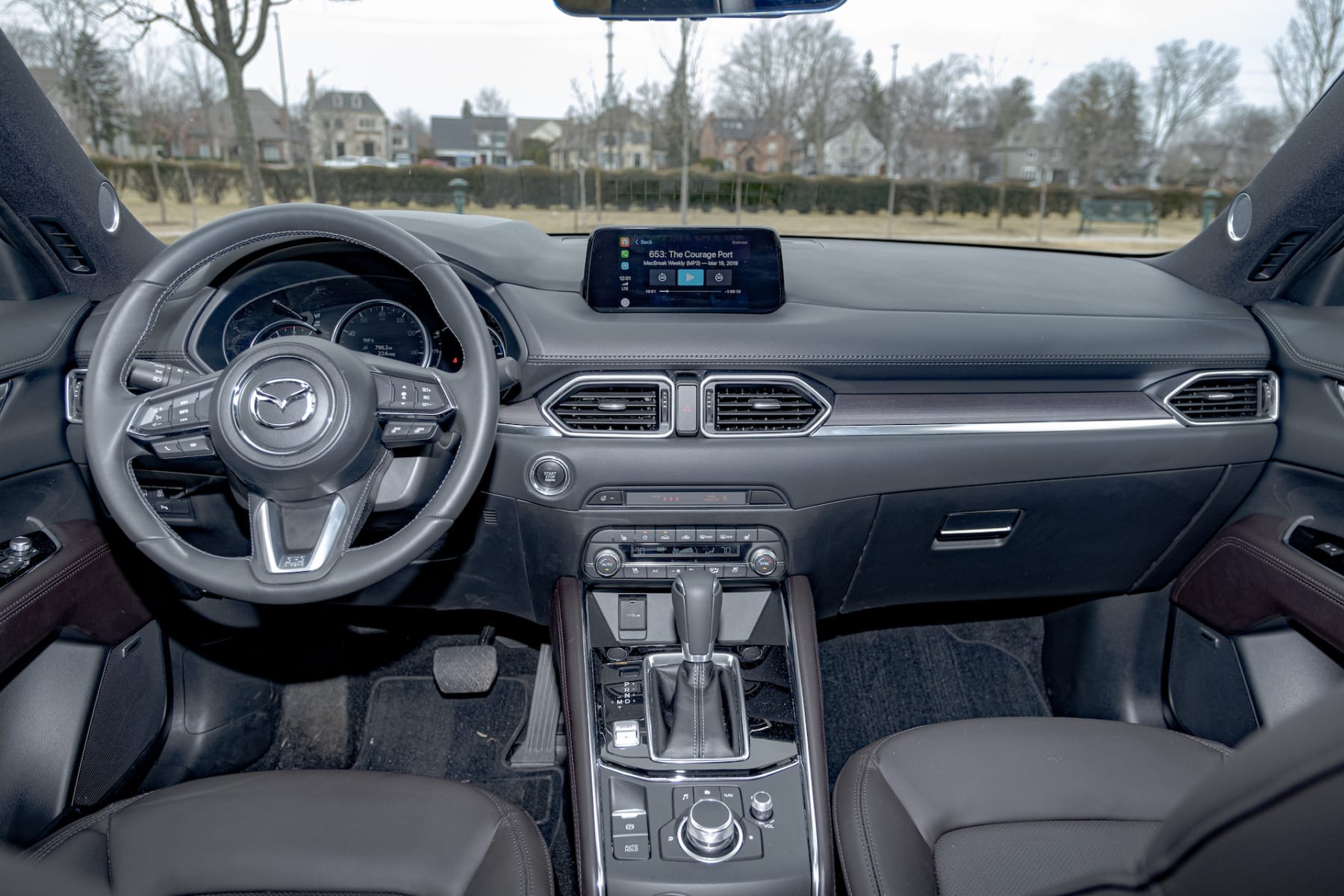 I can see Henry’s point about how uncomfortably close the Mazda is to the Audi. And absolutely how close the CX-5 is to the Acura. Full credit goes to Mazda for this. They tend to be overlooked by the mainstream. The mainstream will suck up all the RAV4s and CRVs, which are not as good as the CX-5. Get someone into a CX-5 who has never driven one and you tend to get converts. The problem is getting them to actually take one for a test drive.

Hence, “almost famous.” The 2019 Mazda CX-5 with the turbo engine may be the best vehicle in its class. The reason it doesn’t move 300,000+ units a year is because no one outside the enthusiast market knows it exists.