Winter is coming. Sadly not for us GoT fans— or maybe not so sadly, given the quality of the final season– but certainly for those of us living in New England. The threat of first snowfall perpetually looms and the daily Weather Channel check-in is cause for constant, second-guessing thoughts: it’s about to get cold, and it’s about to be snowy. For the first time in years I’m going to daily-drive a rear-wheel-drive car through the winter’s worst. As excited as I am, there’s some preparation in store for my Mazda Miata.

[Disclaimer: Michelin provided us with these tires at no cost.]

First and by far most important: winter tires. Doing so comes at the help of Michelin, who stepped up and provided a set of X-Ice Xi3 tires for this test. “Test” is loose in this sense, but I’m out to prove that you can, in fact, drive a small, light, RWD sports car through the winter with moderate if not total success. Stay tuned for a comprehensive review once I’ve had time to try the Michelins out in the snow. And for a review of the Miata in the snow, of course. 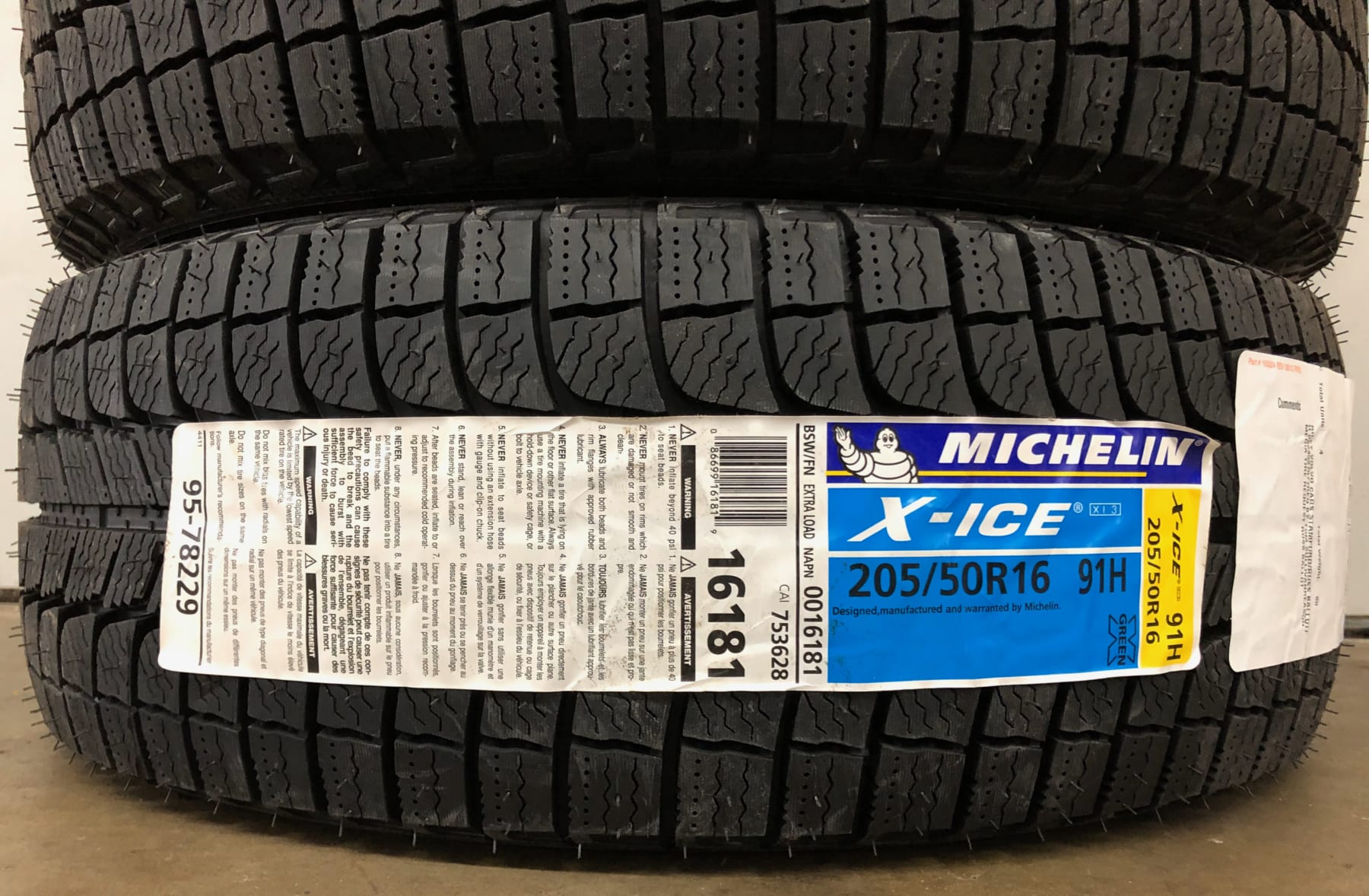 The 205/50/R16 tires for this test are appropriately small for the car. Why drop down from the 17” wheel size? Simple: more sidewall for pothole absorption. Turns out, FD RX-7 wheels fit perfectly. They’re the right bolt pattern, backspacing, and offset. Not to mention, they still don’t look half bad even twenty-five years later. I was sold. A few days later I picked up a set of four $200 cash. They’re not perfect but they’re powder-coated black and still look half decent, weigh relatively little, cost next to nothing as far as wheels go. Plus it’s a fun hat tip to Mazda’s past, plucked straight from one of the brand’s most important and notable vehicles. 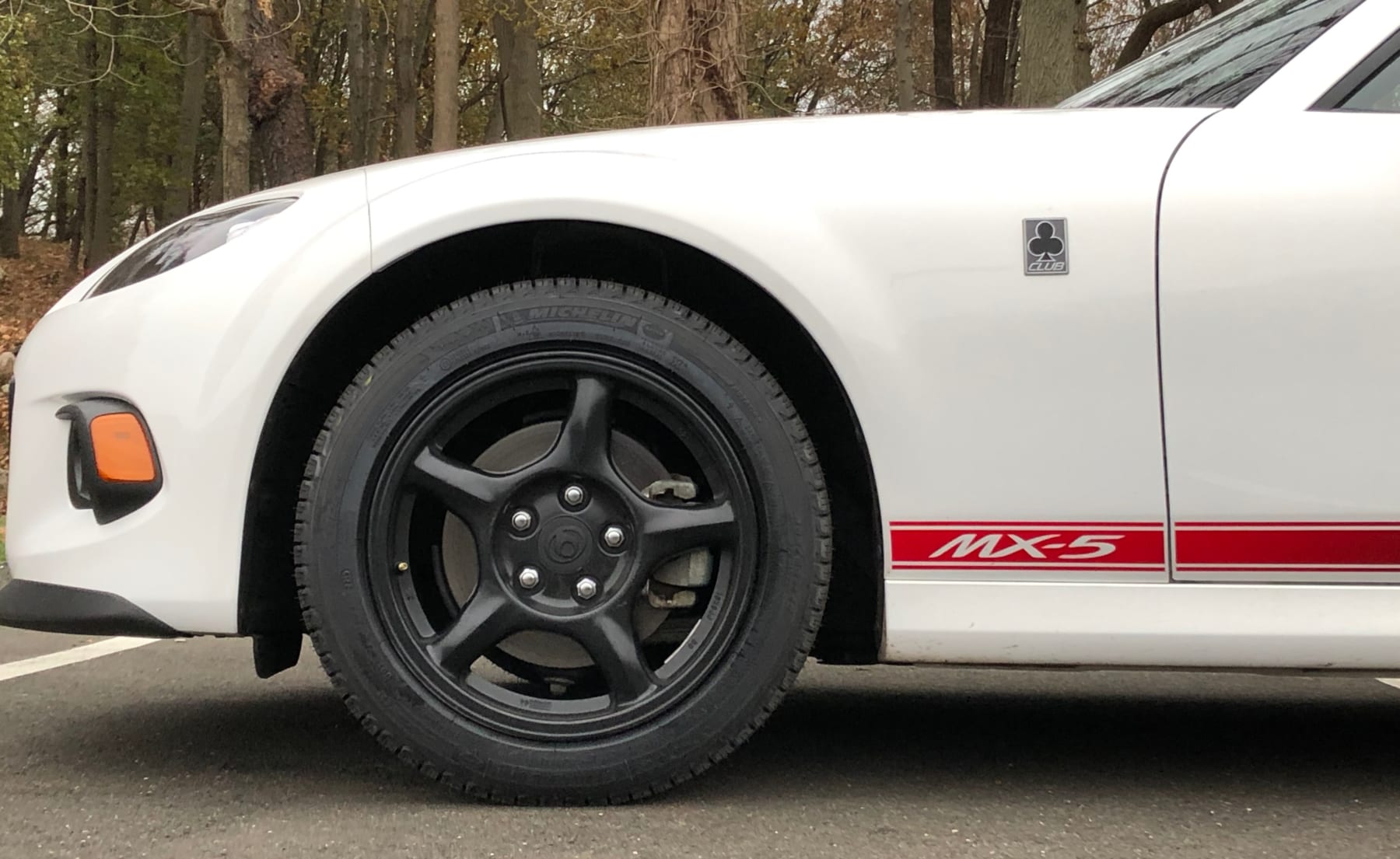 It’s been a while since I dabbled in the winter tire field. In the past I’ve tried the Falken Eurowinter FS439, Firestone Winterforce and General Altima Arctic. The first two were on my Challenger R/T; the General was on my Subaru WRX. It’s been a couple years since I’ve driven on any of these tires but I logged about 50k miles on them combined. Not a ton of mileage, but not nothing. It should be good grounds for evaluation of the Michelins. 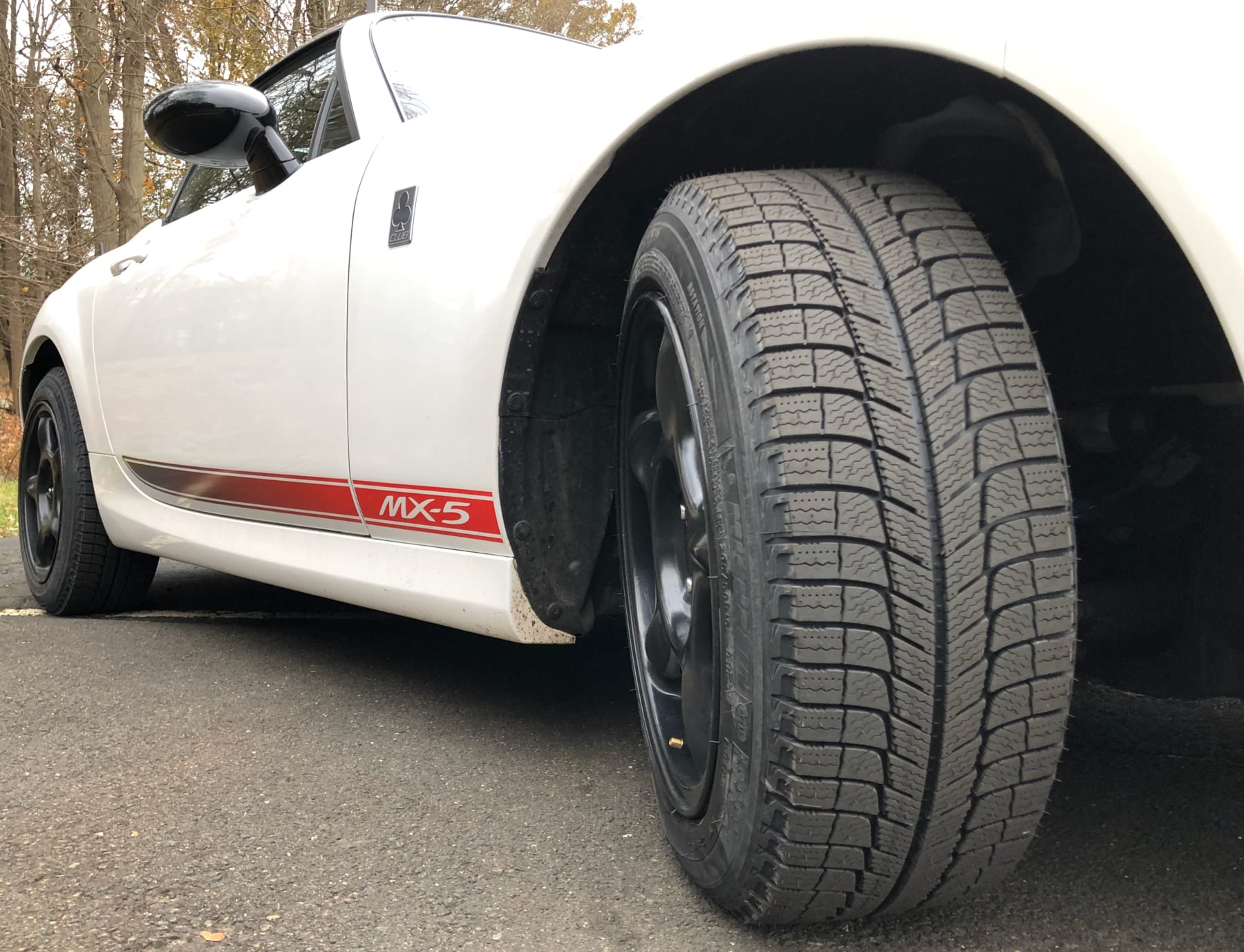 And now, enabled by Todd at Everyday Driver and his “snow tires on a sports car are fine in the snow” rants, I’m about to do something many will think me an idiot for even considering: I’m about to drive my Mazda Miata through a Connecticut winter. Every day. Snow, sleet, ice, you name it and I’ll be driving through it. Okay, if it’s treacherous or impassable, I won’t be out. Short of ground clearance becoming an issue, I intend on driving through– or trying to drive through– any and all weather. 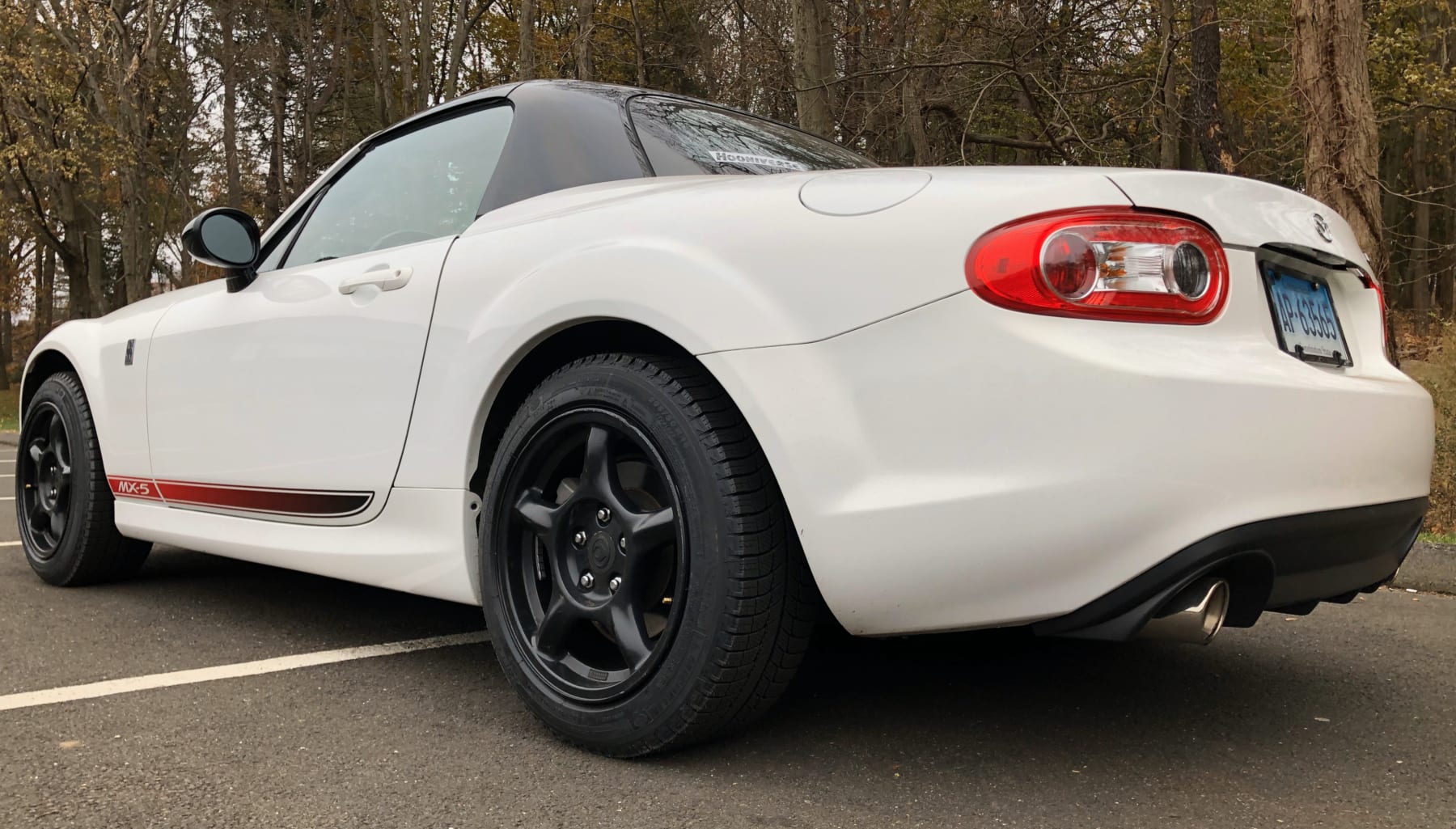 Winter tires and wheels weren’t the only prep, though. My snow brush and some basic recovery gear migrated from storage into the car to live until it’s hopefully (never) needed. I also procured a collapsible shovel to live in the trunk should it be needed to the car out. Last but not least are rubber floor mats, which I’ve yet to buy but will be doing so shortly. 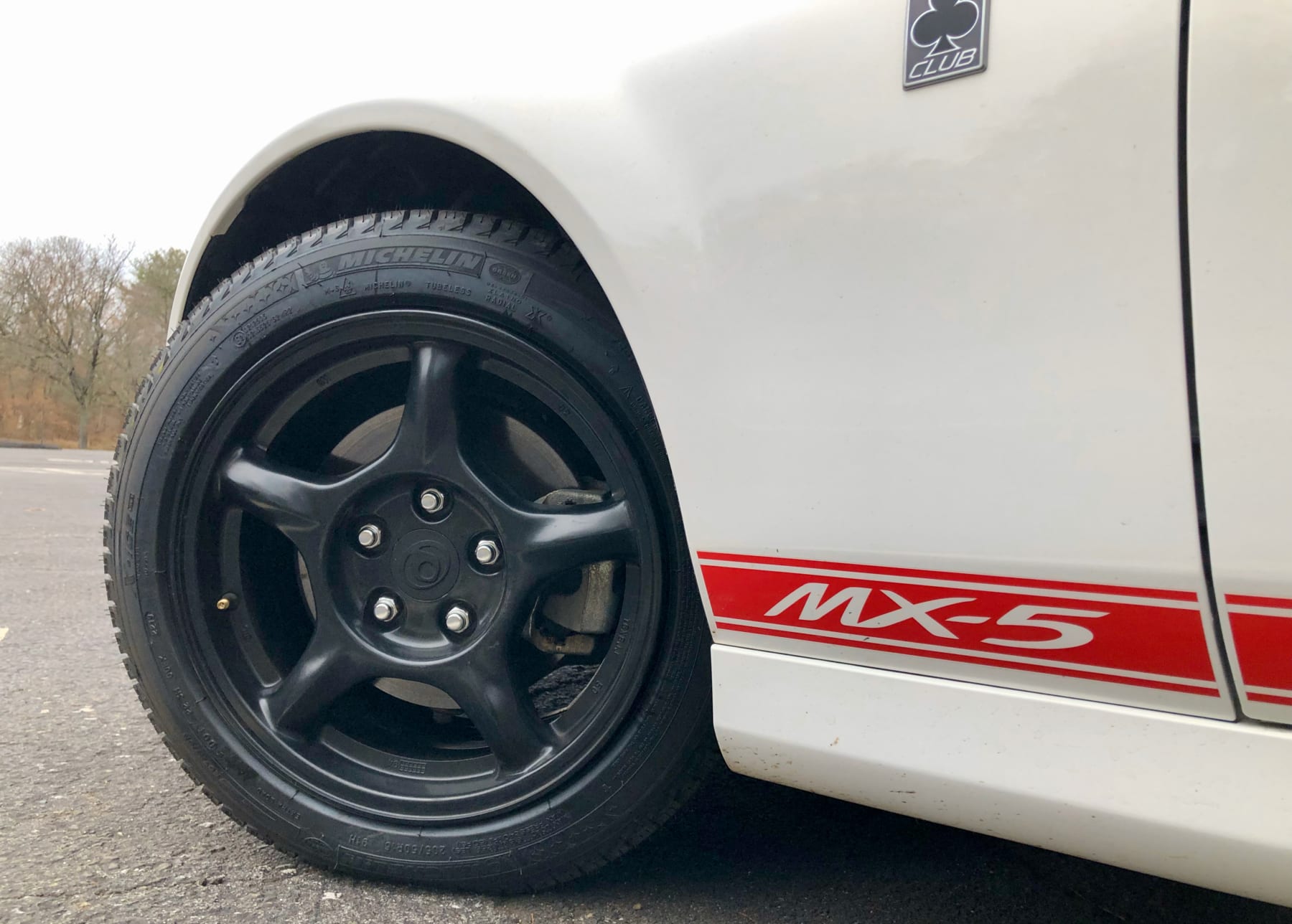 So I’m out to see how my beloved Miata does in the inbound New England winter. We’ll see how it goes. Truthfully, I’m looking forward to it. Driving my prior rear-wheel-drive vehicles in the snow made for some of my best driving memories ever, and biggest automotive laughs. I have a feeling that it’s going to be a snowy winter, so stay tuned for an update on how both the Miata and the Michelins perform when the snow starts falling. I’ll be sitting here waiting patiently, finger hovering over the “Traction Control OFF” button.