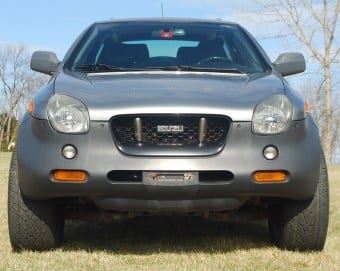 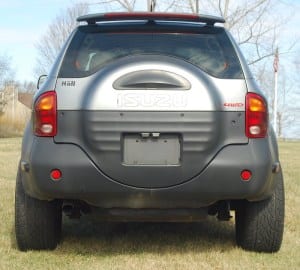 A few months ago I found myself digging through a toolbox full of Matchbox and Hot Wheels cars from my childhood, reminiscing, thinking back on simpler days, and laughing inwardly at how little I’ve changed in regards to my love for cars.  The collection was largely nothing special, but there were a few exceptions among them in the miniature forms of a Viper, Corvette, 911 Targa, R33 Skyline, and CJ Scrambler.  All had a place in my heart back then, just as they still do now in their full-size forms. Mixed in with the others were two oddball SUVs, one yellow and the other bright shining silver, both with plastic cladding adorning their lower portions, a spare tire molded into rear gate, and a black insert on the hood just behind the pulled-back headlights.  Both of the Isuzu VehiCROSS toys lived in one of my desk drawers ever since I found them that day, while thoughts of the quirky little Japanese 4×4 lived in the back of my mind.  Mere months later I’d be signing my name on the title of a real one. 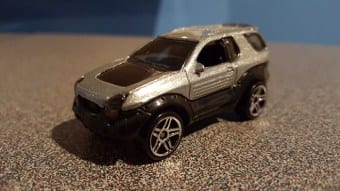 I’d always liked the VehiCROSS (VX for short) and it’s sheer irony (or coincidence?) that I randomly (or was it foreboding?) found the VX toys that day.  This was just recently, but boredom put the VX on my radar back in the winter of 2013-2014.  My 2005 Avalanche was performing admirably with only routine maintenance needed to keep it going strong, but it wasn’t doing much to quell my desire for a fun vehicle.  By chance I stumbled upon a white 2000 VehiCROSS at a local used car dealership and upon seeing it instantly remembered always liking them—a pseudo space-truck, Mars Rover-esque thing suited as much for the street as the trails.  Growing up in a Jeep household and regularly spending weekends off-roading, the CJ/YJ/TJ felt so commonplace that the VX seemed downright other-worldly by comparison, and for that I loved it. The specific example at the used dealership needed more work and repairs than I wanted to put into it so I moved on and, mainly through the purchase of my Challenger in the summer of 2014, forgot about craving a 4WD toy.  But the itch persisted; about six weeks ago I came across a meticulously maintained and tastefully modified black VehiCROSS on the truck’s respective forum and came very close to buying it.  It had a meticulous maintenance record, a slew of off-road equipment, and an owner who wanted it to go to a good home.  It all seemed perfect aside from being ~850 miles away.  But, as I’ve learned repeatedly over the last few years, life has a weird way of doing things and timing prevented me from sealing the deal.  The owner listed it on eBay and it sold just as I was going through one of the toughest times of my life, with my grandfather passing away the Wednesday before I was hoping to fly out to bring home the Ebony VX.  A few weeks went by with the VehiCROSS almost slipping out of mind, and an innocent moment spent perusing the VehiCROSS Facebook group led me to a thread in which the original poster said they had been in an accident and their VX was toast.  A response further down was from a guy named Tony in NY telling the OP that if they were looking for another one he was thinking of selling his and the rest, as they say, is history. I messaged Tony immediately.  Two days later we met in the rain in a parking lot where, shivering and soaked, he walked me around the vehicle while telling me its history.  Tony then rode shotgun on a test-drive, getting the VX up to cruising speed and also hitting some windy mountain roads.  It behaved well on the road and I thoroughly enjoyed driving it as much as I enjoyed looking at it.  Tony seemed like a good guy and the VehiCROSS in question, a 2001 with roughly 92k miles, was mostly clean and only needed a few things.  He kept mentioning he wasn’t in a rush to sell and really wanted to get his asking price, but I wasn’t eager to let this one get away as well.  The following day we met at the shop that has maintained all of my family’s vehicles for ~twenty years at which the mechanics said it was in good shape aside from a leak in a transmission line and some rust.  Motor ran strong and the brakes were good, tires fair; I thanked Tony for meeting me and said I’d be in touch.  Pondering it over that night, everything seemed to line up: local, low miles, decently maintained, and the price was right.  The next night I told Tony that I’d happily buy it and on Thursday, March 17th of 2016 it became mine. 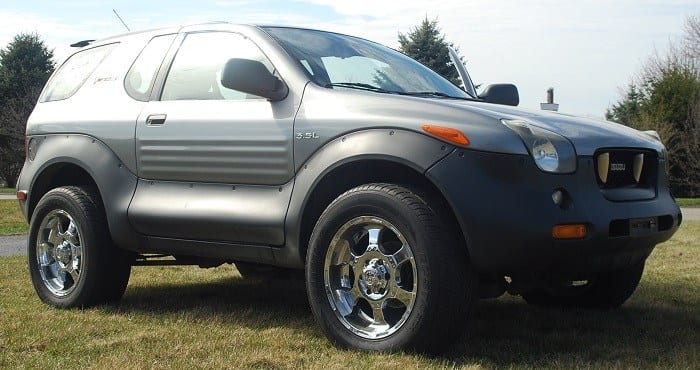 Some fun and interesting stuff about the VX: Isuzu built only 5958 VehiCROSSes between 1997 and 2001, with only 4153 coming to the States.  The story goes that the company had one set of tooling and once it wore out—that was it, no more VX, and such explains the low production numbers.  It was a halo vehicle for the automaker, a small, nimble, innovative SUV built on the Trooper’s platform.    Add in the unique styling, plastic cladding, and short wheelbase, it’s like nothing else out there.  With the Torque on Demand (TOD) 4WD system, Recaro seats, and monotube/piggyback reservoir style shocks, it had the advanced tech to back up its futuristic looks. It drives like nothing else out there, too.  My new-to-me VX has KYB shocks but the truck is notorious for its ultra-stiff ride, due in part to bump stops that were too long for their own good.  Advertised as street-happy alternative to the traditional off-road toy (a la Wrangler), it had a serious emphasis on its handling prowess in addition to its off-road capability.  The 96” wheelbase certainly helps it feel agile as do the overall dimensions of the rig and its 51/49 weight balance.  The steering is strangely weighted but there’s a decent amount of feel and feedback to the steering, definitely more than you’d expect from a fifteen year-old 4WD rig (but occasionally it goes numb without warning, in need of bushings maybe?).  The ultra-short wheelbase, quick turn-in, and tight suspension also allow you to dive in to corners much harder than you’d think to in a Wrangler, and it encourages you to punish it on a mountain road, paved or not. 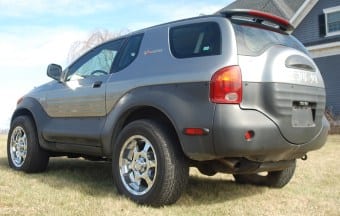 Power isn’t much to brag about with a 3.5L V6 making 215 HP and 230 lb-ft., tasked with pushing around nearly two tons, but you don’t really want to be going any faster than, say, 75 MPH anyways.  The quick throttle response is deceptive as it feels like power tapers off moving up the rev range, but the Flowmaster Super 40 the previous owner mounted up when the original muffler rotted out aids the sensation of things happening faster than they actually are.  At speed the VehiCROSS feels solid and mostly confident but it is a bit twitchy (again due to the wheelbase and height), especially if you’re used to larger vehicles.  The ride quality isn’t great but that’s expected, and the 18” wheels and low-ish profile tires that came on my VX aren’t doing the smoothness any favors either.  You definitely get a bit jarred over bumps and potholes but it doesn’t resonate through your spine, so road trips should be do-able.  Just one drive in it though and it’s evident that the size, looks, and combined on-road/off-road capabilities do define it entirely. About the TOD/4WD system: with an Auto-4WD mode and a 4WD Low mode operated via transfer case, TOD was way ahead of its time.  Put in its simplest explanation, Auto utilizes sensors that gauge slip from the rear wheels to “talk” to a computer and tell it to send to the fronts and how much of it.  It’s conventional today but back then the system’s ability to send a varying amount of power to slipping or gripping corners was quite complex.  I’m interested to see how this translates to snow performance since the majority of my winter experience was in my 2005 Avalanche which coincidentally had an Auto 4WD mode as well, but I ignored it entirely.  That truck was nearly unstoppable in the white stuff, powering and pushing its way through snowstorms of well over two feet.  Chalk it up to a good selectable 2WD/4WD system, V8 power, and enough weight to keep momentum up.  The VX has maybe one and a half of those, but it’s an entirely different animal; should be interesting. 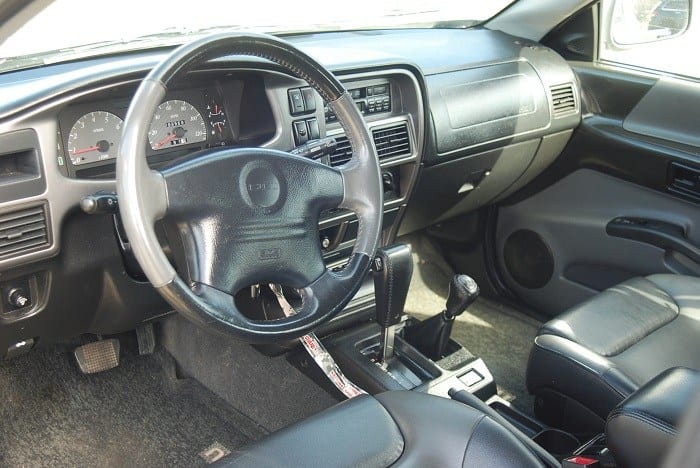 I’m very excited to start driving the VehiCROSS and even more so to start building it up a bit.  I do have my questions about doing so, especially with the scarcity of parts and the fact that it needs to remain reliable transportation to work, but plans for things such as more off-road friendly wheels/tires and a bit of protection and recovery gear are already in the works.  I’m also going to do an underbody coating to remedy the rust, and will be improving the lighting situation.  It needs a few other “repairs,” like the alarm doesn’t work, the HVAC fan desperately needs to be cleaned out, and the windows only go down about four inches, so I’ll get to those sooner hopefully rather than later.  The VX is also notorious for oil consumption so that needs to be addressed shortly as well.  And of course it needs the basic slew of modern bits like a place to charge my phone and place to mount it for navigational purposes, along with an AUX input to listen to podcasts and the like.  Doing any/all of the aforementioned won’t make it any better at anything than a comparable Jeep or other 4WD truck but there’s something great and eye-catching about the VX that few other vehicles can match, especially at the price point at which you can snag one of the Isuzus. 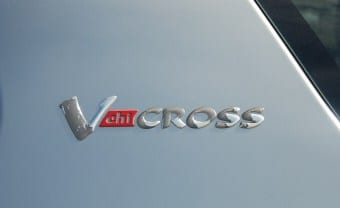 It’s weird how life works.  When you search hard for something and find exactly what you’re looking for, the other stuff in life can entirely derail it.  But when you’re not looking at all, something can come along and work out nearly perfectly.  This VehiCROSS fell into place almost accidentally and will undoubtedly be one of the most unique and exciting vehicles I’ll ever own.  I’ve seen maybe five in my life, and am really happy to be able to see this one every day.  It would be great if the project part of this progresses slow and steady (unlike my MR2 project), but with parts being so scarce it could be a sporadic build or it could take years…only time will tell.  For now it’s time to start getting the VX cleaned up and road-ready for the spring and for some light wheeling. So if anybody has a lead on some skids, sliders, or any other armor…give me a shout.  In the meantime I’ll be daydreaming of the next step, and smiling like a fool every time I look at the Kaiser Silver Hot Wheels VehiCROSS that’s sitting on my desk. [Images copyright 2016 Hooniverse/Ross Ballot]