UK Scrappage: Save ’em while you can

A close relative, whose name will be concealed to protect the innocent, was recently the proud owner of a Ford Focus ST170. This was the ‘quite warm’ version of the first-generation Focus, and understudy to the scalding Focus RS. Without the spicy price tag and ‘deep breath’ running costs of the RS, and somewhat more family-friendly thanks to being available in workaday five-door format, the ST170 was a big seller. Consequently, there are plenty of them around.

There’s one less now, though, because this particular example, in the right colour, with the right spec and with the right service history, has now been traded in under Ford UK’s scrappage scheme. It was a case of economics overtaking emotions; the warrantied, factory-fresh appeal of a new Fiesta, with a £2,000 allowance for scrapping the ST, outweighed the appeal of hanging onto a much-loved car with a proven history, but a resale value of less than half that amount.

This isn’t a post to question the moral benefits of destroying functional, well-maintained cars in the interest of selling brand-new ones (and, hopefully, reducing overall exhaust emissions in the process); it’s a quick reminder that many of the cars we once lusted after are at serious risk of disappearing altogether in the near future. 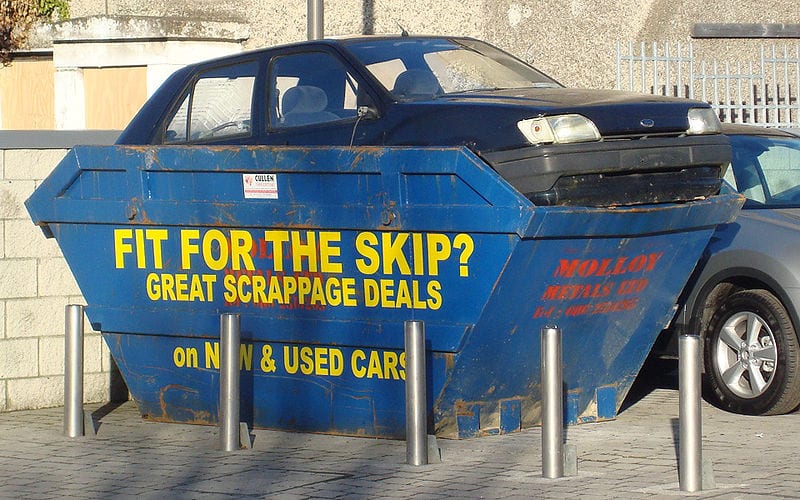 Fit for the skip?

Of course, I have absolutely no statistical evidence to support what I’m about to say, but in my experience of the UKs government-backed official scrappage scheme of several years back, none of the cars sacrificed by customers were what you’d call ‘end-of-life’. Among them, I know that an immaculate Vauxhall Omega 2.6 Elite station wagon, a rust-free Mercedes E430 estate and a spotless C230 Sport with the full AMG dress-up pack (whose staggered monoblock rims live on under my Audi A4) gave their lives for two grand off a new Mercedes.

These were all beautifully-maintained machines of the kind where the private sales ad might well have said “first to see will buy”, albeit for a price a little way short of the bounty paid by any scrappage scheme. And that’s the thing. That C230 Sport was worth about £1,900 and was about due its next service, so the offer of a two grand scrappage allowance and removal of the hassle of moving the car on through other means, sealed its demise.

The UK’s government scheme is no more (although there is street-corner chatter about it coming back), but manufactures under pressure to comply with EU rules on overall fleet emissions are now offering schemes of their own, self-funded and based on boosting sales volumes to offset the extra discounts – and avoidance of the heavy fines that come with non-compliance with CO2 targets. It’s not far short of a fire sale.

Most of the major brands are offering such schemes. In some cases, the scrapped car could be as recent as a 2013 model, and need only have been owned for 60 days. But you can’t just buy an old shitter for £500 on Monday and trade it in for £2k on Tuesday, for example. More likely, you’ll take your pride and joy in for a routine service and find yourself intercepted by a shiny-suited salesman who’ll extol the virtues of owning something new and highly discounted. A great many easy sales are landed this way. I know, because I participated in this ruse myself, mercenary as I was.

So another fastidiously maintained car with loads of life in it will hit the scrap pile. Today, there must be a hefty roster of desirable machines on the at-risk list; cars that might once have been the apple of their owners eye, but are only an eye-catching TV commercial – or perhaps a change in domestic circumstances – away from being swapped for something else. And, right now, that means scrappage.

There’s no doubt whatsoever, now is the time to buy that older used car that you’ve always wanted; its next owner might well be its last. Had my relative’s ST gone on the market before she was taken by the whim of new-car ownership, it would have been a great buy for somebody. Especially because ST170s are pretty cheap right now – they have yet to attract the premiums that faster Fords inevitably rise to, as shown by the ludicrous prices commanded by XR3is, but, mark my words, they will some day.

The horror stories of scrappage and C4C schemes gone by have shown that nothing is sacred; the fates of Mitsubishis and Maseratis alike are sealed by the promise of affordable new car PCP payments with no money down. My father’s own near-pristine ‘03 540i, for instance, is probably worth way less than BMW would give him for it against a new equivalent, and falls firmly into the environmentally irresponsible gas-guzzler bracket of cars that “our roads need to be rid of at all costs”. It’s only his disinterest in joining the “new car every three years, my entire life is on finance” brigade that keeps its future secure. For now, anyway: many folk are more open to such financial commitment.

The only way to ensure that you get the older car you’ve always wanted is to make it yours as soon as possible.