At the end of September, Road America hosted its annual World Challenge weekend, formerly the Pirelli World Challenge. Dozens of high-powered cars from various series sorted into their own unique classes attacked the track just as Wisconsin’s best fall foliage began to show their colors. I snagged a press pass and spent (a rainy) Saturday trackside. Here’s a recap backed by a photos I shot without my Sony A6000.

There’s no exaggeration in me saying that the racing (and even qualifying) I witnessed on Saturday during the Blancpain GT World Challenge America was, I’m convinced, the finest motorsports action I’ve experienced at this track. Ear-shattering sounds from the gurgling of the Turner Motorsports BMW M6 GT3’s turbos desperately breathing in crisp air while coming into Canada Corner, deep unmistakable V8 grumble from the two Bentleys drafting one another, or the blipping upshifts clocked by DXDT Racing’s winged Mercedes-AMG GT3. It was blissful. 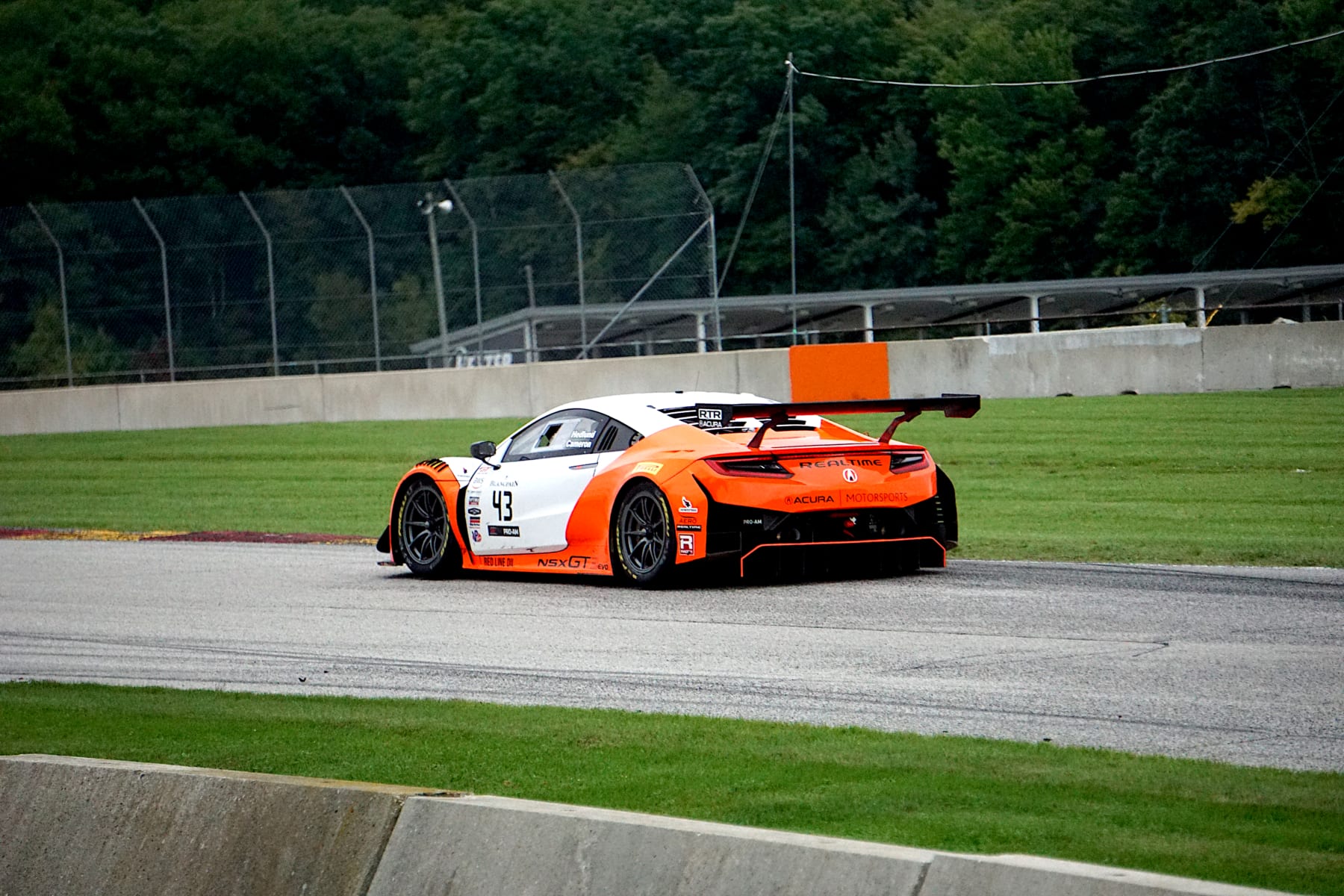 Friday was for practice, Saturday morning for qualifying, and then shortly after 2pm the green flag dropped as races lasted into Sunday. When the checkered flags finally fell on Sunday afternoon, the R. Ferri Motorsports #61 Ferrari 488 GT3 piloted by Daniel Serra and Toni Vilander had won the first race, followed by Andy Soucek and Alvaro Parente of K-PAX Racing came in the #9 Bentley Continental GT3.

Grabbing first place victory for the second race was RealTime Racing ‘s #43 Acura NSX with Mike Hedlund and Dave Cameron behind the wheel clocking a best 2:07.663 lap time, tailed by the R. Ferri Motorsport team. RealTime Racing owner Pete Cunningham, one of the friendliest faces I’ve met in motorsports on and off the track, had people sign his NSX’s white hood in the pits throughout the day and at Siebkens the night before.

The next race begins in Sin City, as the American series of the Blancpain GT World Challenge makes its way this weekend to Las Vegas October 18-20. Across the pond, the European series wraps up for the year at the Circuit de Barcelona-Catalunya next weekend. Stream and learn more about the race in Vegas here, I can guarantee you won’t want to miss this.

Besides the exotic wonders of the GT3 racing, the track this weekend was the stage for the ferocity that unfolds in the TC America Series events, which falls under the growing SRO Motorsports Group umbrella that houses the Blancpain GT World Challenge America series. 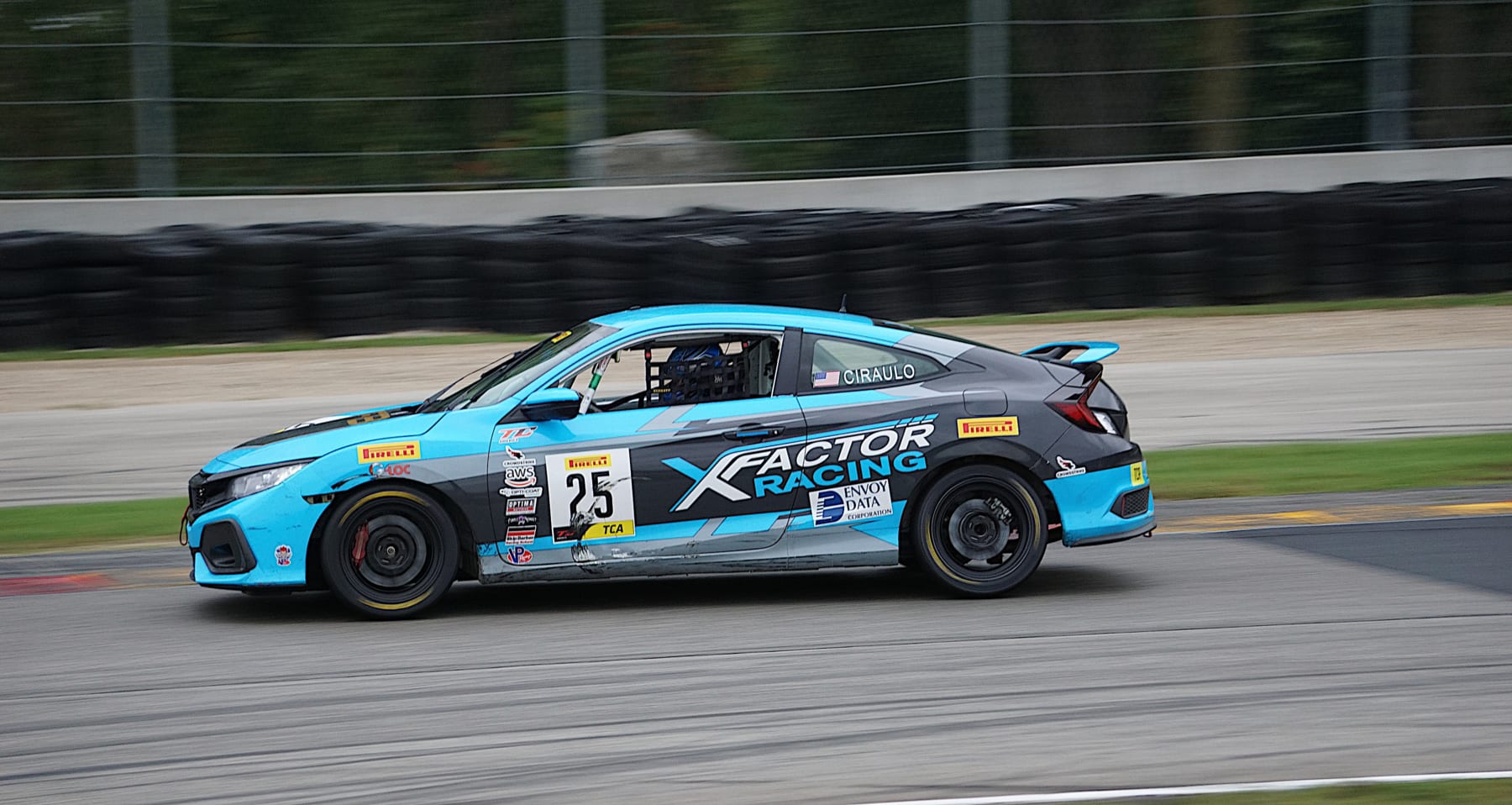 Sheet after sheet of rain and walls of gray clouds swept their way into the afternoon. The track became slick and spectators sought refuge in their cars. When conditions finally cleared up to be able to stand trackside with my camera, I posted up outside of Turn 6 to catch the soon-coming swam of TC America series racers. This has always been one of my favorite spots to shoot, just before cars make a quick dash  into Turn 7 and the Hurry Downs. 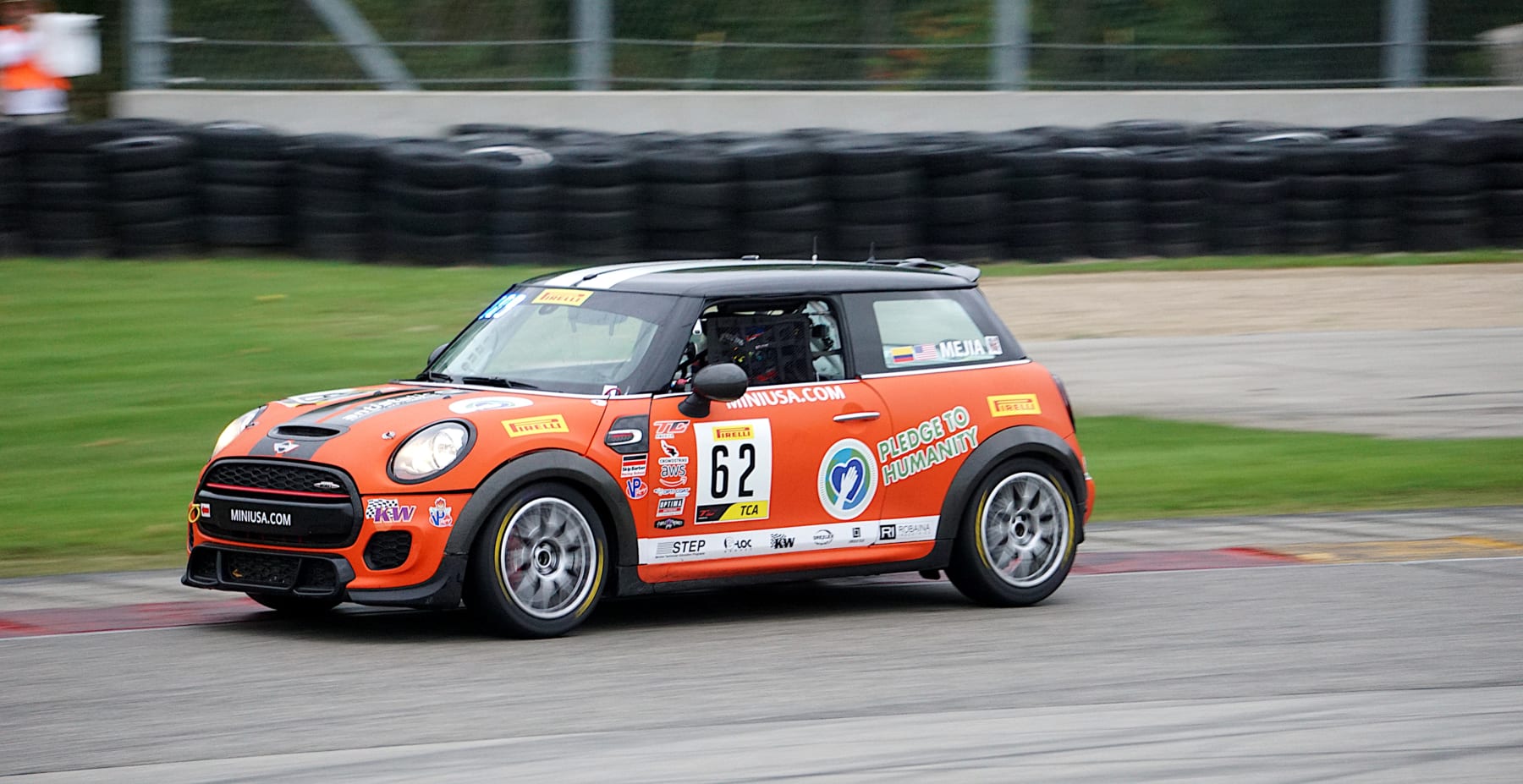 By Sunday evening, the exciting results were posted for the TC America Races. 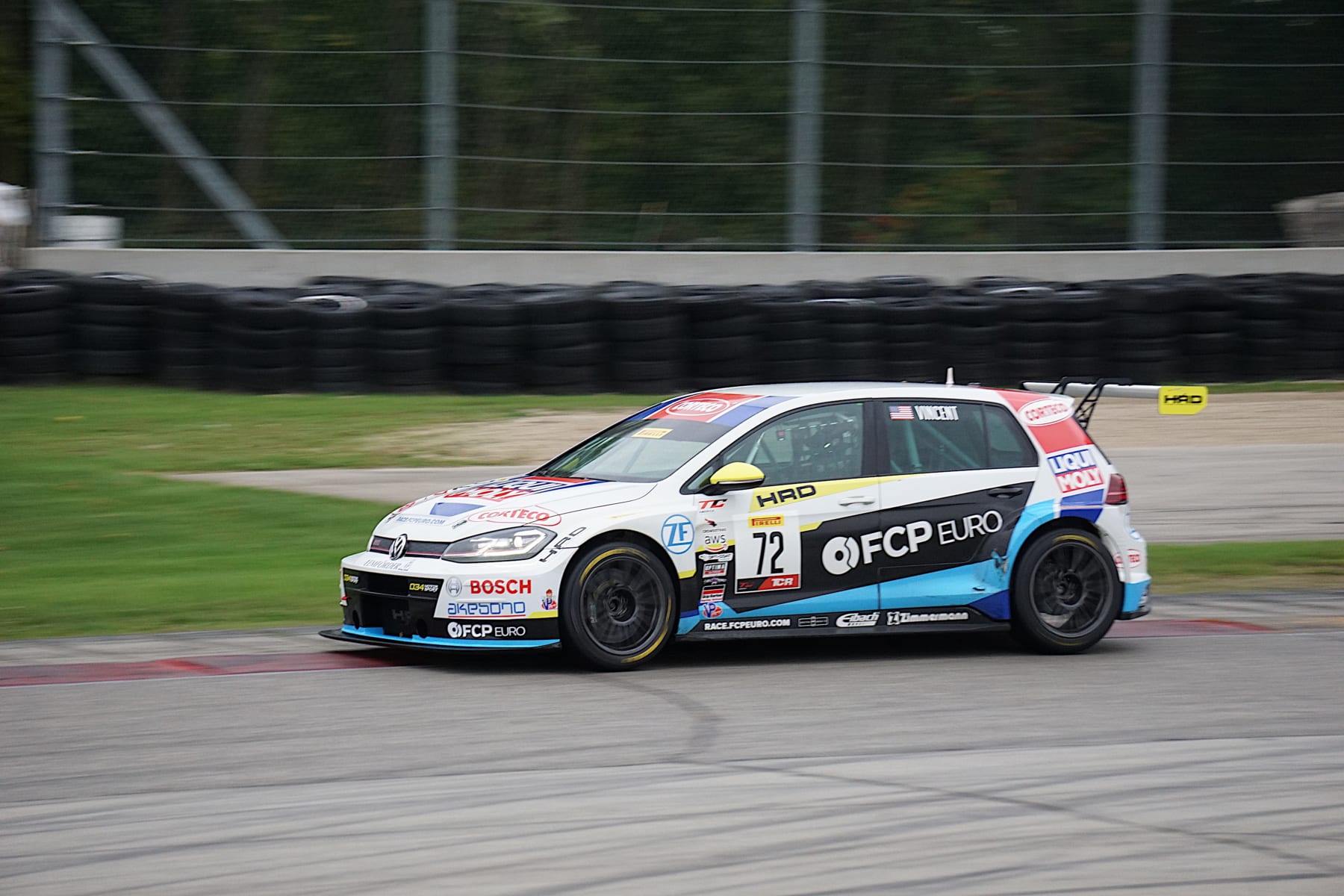 For TC class, teams were able to run 14 dry laps. At the close of the first race, first was claimed by James Clay of Copart/BimmerWorld Racing’s #63 BMW M240iR Cup, who recorded the fastest lap of 2:27. Second place went to Toby Grahovec in Classic BMW’s #26 M24oiR Cup, followed by Johan Schwartz of Rooster Hall Racing in the #80 M24oiR Cup. Fourth went to GenRacer’s Jeff Rica in the #78 Hyundai Genesis Coupe. 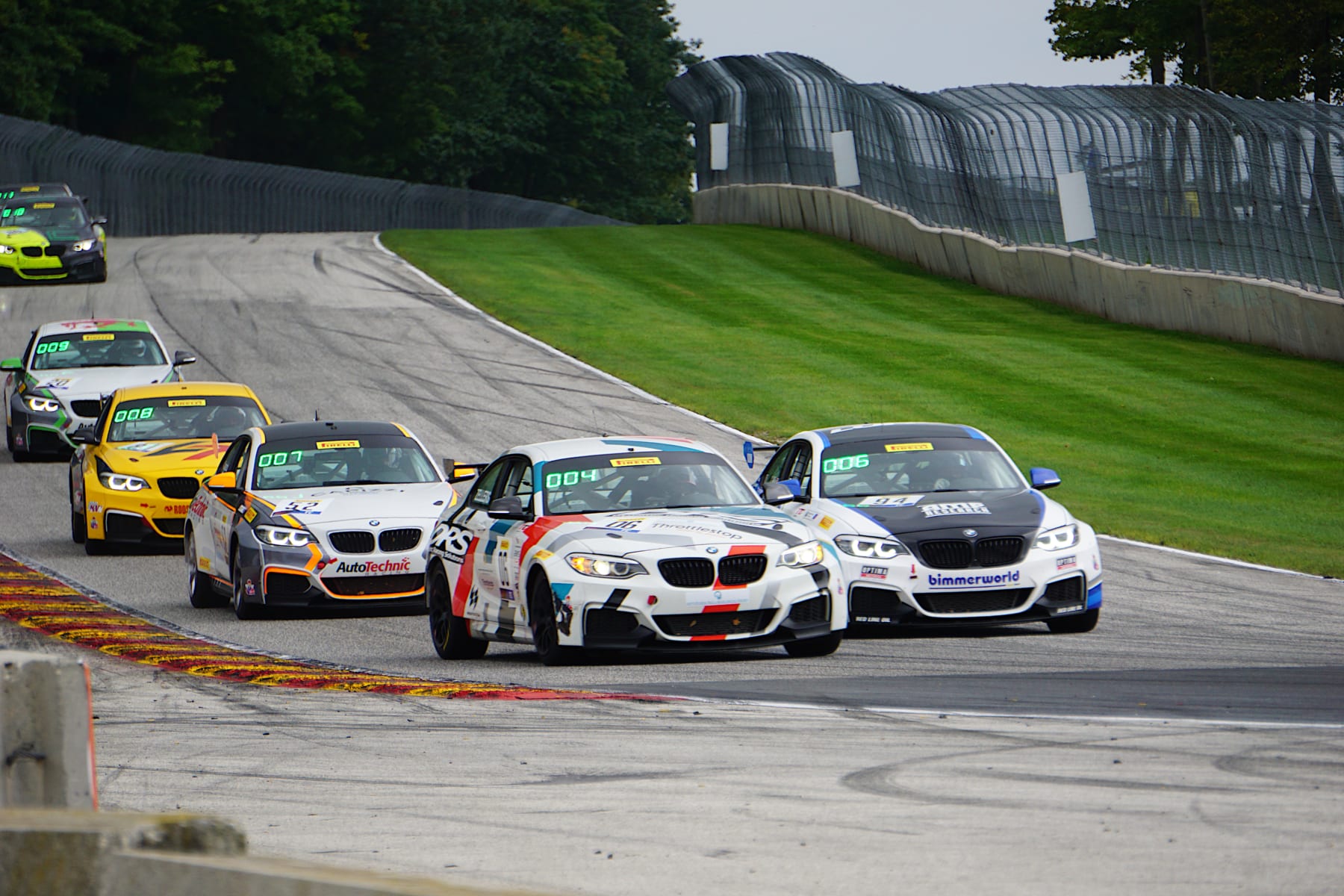 Cloud rolled back in and the second race was  very wet, limiting the top four teams to only nine laps, with average times around 3:71. BMW again had the monopoly this time with first, second, and third place finishes. Johan Schwartz of Rooster Hall Racing took first in the #80 BMW M240iR Cup, trailed behind by James Clay’s #63 M240iR Cup with the fastest lap at 2:50, and Toby Grahovec’s #26 M24oiR Cup.

It’s fun to note too, that TechSport Racing’s #23 Nissan 370z, with Joseph Federl in the driver’s seat, crept ahead and beat out the remaining ten teams, nine of them a crowded pack of BMW M240iR Cup or M235iR Cup cars.

With more rain on the way, I headed to Turn 14, to catch the Pirelli GT4 America Sprint and SprintX & East races. Here teams carefully made their way around the curve then punched it as they flew up the main long Road America Straight, headlights casting a glow on the thick mist. 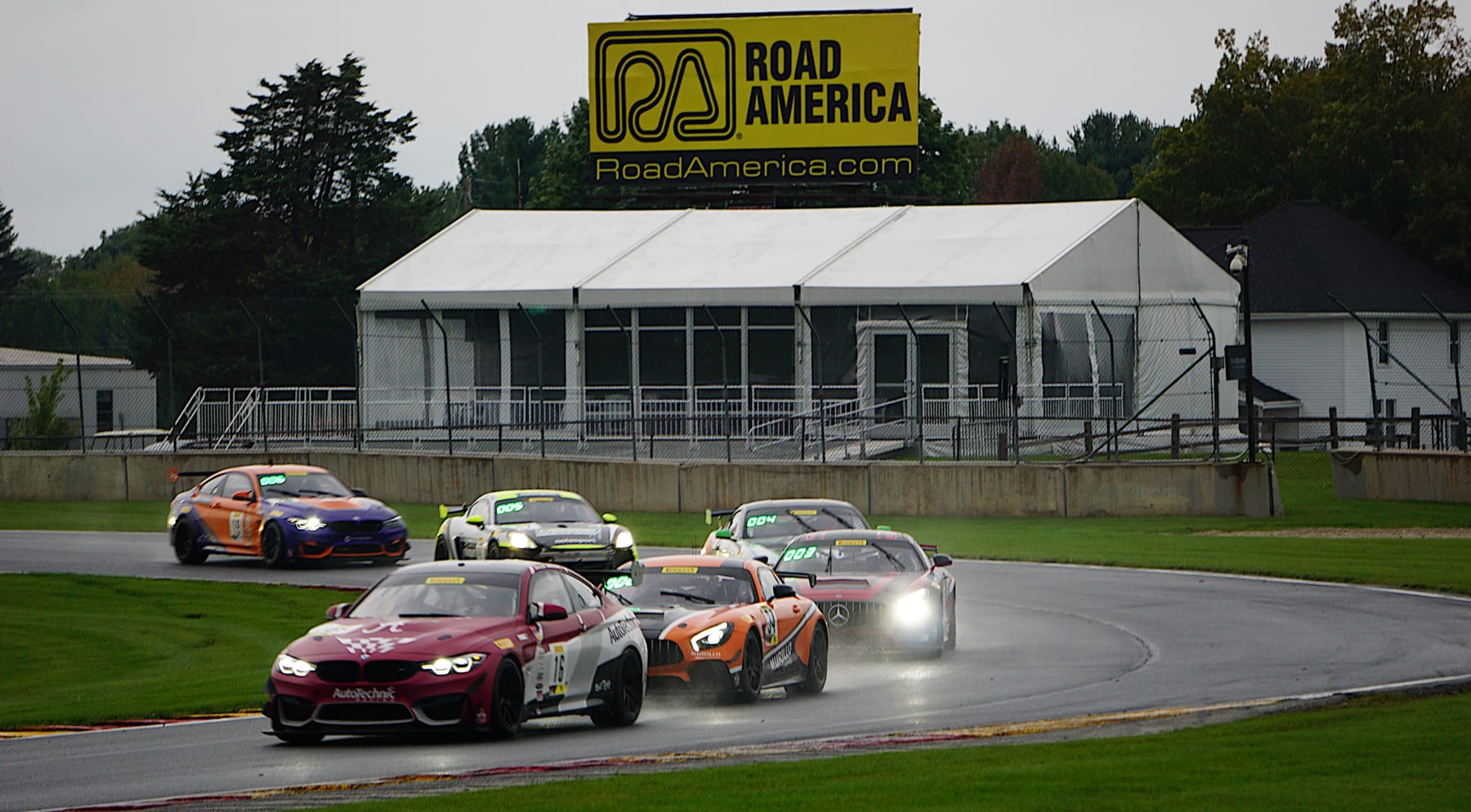 The diversity of cars competing in the GT4 races was fascinating to see. McLaren 580S GT4s (one operated by Andretti Autosport), BMW M4 GT4s, Audi R8 LMS GT4s from Kelly-Moss Photon Motorsports and, several Porsche 718 Cayman CS MRs including one from Flying Lizard Motorsports, Ford Mustang GT4s rivaled by Chevrolet Camaro GT4s including one that ran a hot 2:14 lap, a dreamy Panoz Avezzano GT4 raced of course by the factory’s own team, and a Maserati Gran Turismo MC GT4, the lone Italian on the track.

Winning the first Pirelli GT4 America SprintX & East race was Matthew Fassnacht and Christian Szymczak of Murillo Racing in a Mercedes-AMG GT4 with a best lap time of 2:34, followed by another Mercedes-AMG GT4 from RENNtech Motorsports with Patrick Byrne and Guy Cosmo at the wheel. Third place was scooped up by Stephen Cameron Racing’s BMW M4 GT4 driven by Sean Quinlan and Gregory Liefooghe. 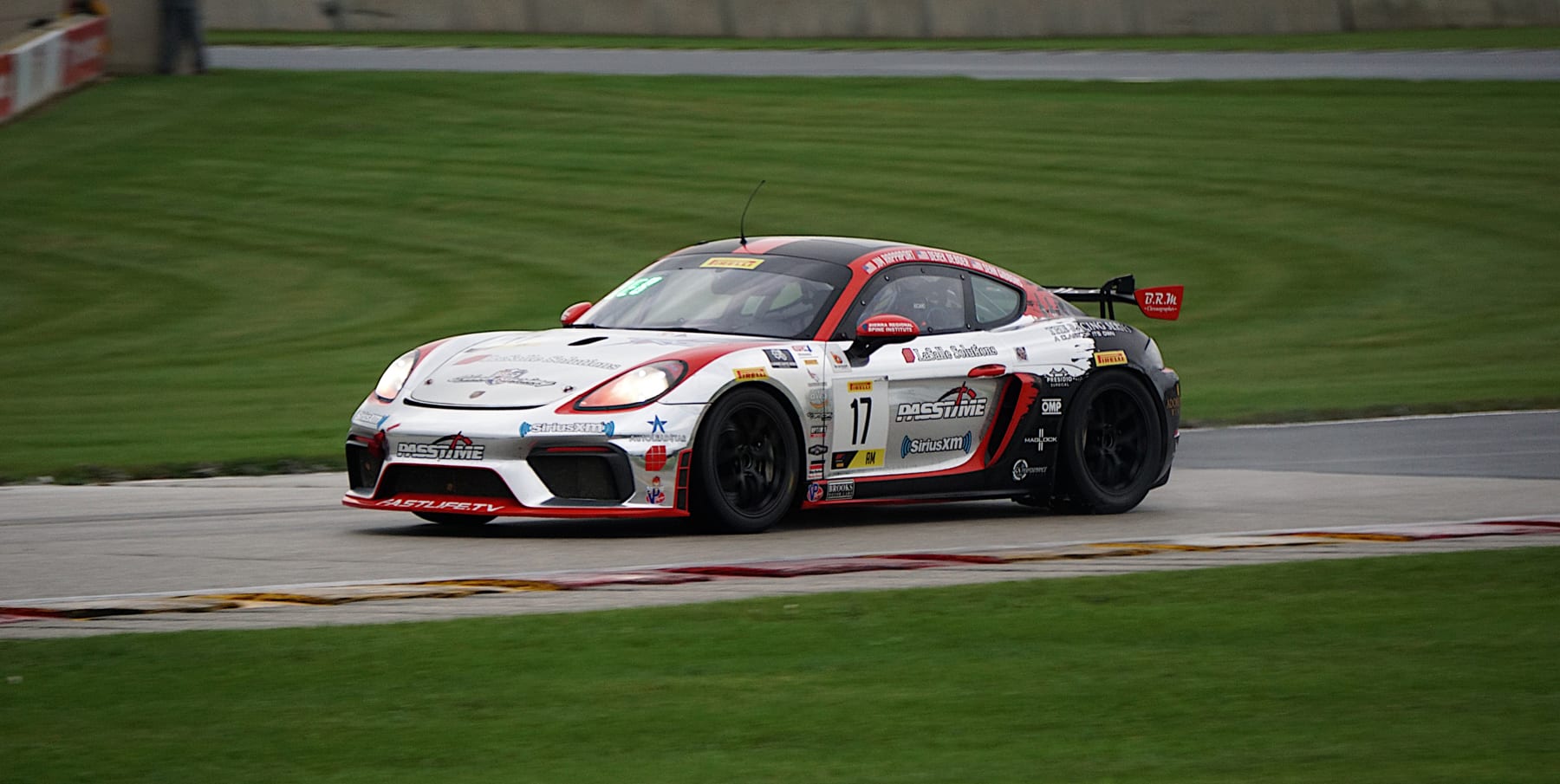 Results for the Pirelli GT4 America Sprint were as following: Michael Cooper of Blackdog Speed Shop and his McLaren 570S GT4 took home first place after 22 laps, followed by Spencer Pumpelly of TRG- The Racers Group in the #66 Porsche 718 Cayman CS MR, with Shane Lewis of Robinson Racing in third place with his Chevrolet Camaro GT4.

The second race, lasted only seven laps until rain halted any further momentum. First, second, and third place went again to the same exact drivers and teams. To give you an idea of how slick the track was, the fastest cars completed seven laps around the four-mile course in 25:21.

Road America recently announced its 2020 race calendar, and the World Challenge will return to the track August 28 through the 30. Expect another packed weekend of TC America, Pirelli GT4 America, and Blancpain GT World Challenge America to flood into the hospitable Elkhart Lake area. While it’s still aways out, discounted tickets are on sale now until August 19, and don’t forget- you can also camp right next to the track.