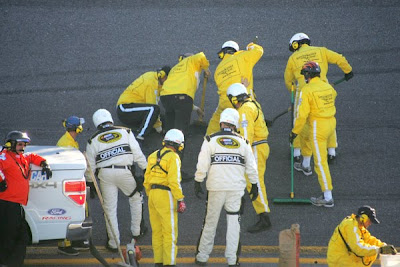 Now this olelongrooffan is certain that a whole bunch of we Hoons out here in Hooniverse are not all that into NASCAR and all that goes lefty-left but I just have this to say about that…..

One of the cool things about living here in the World Center Of Racing  is the cool sh*t you find out about events that occur during the running of a race.
thejeepjunkie is pretty well connected around the tri-city area that is comprised of Ormond Beach, Holly Hill and Daytona Beach, a semi megapolis here on the east central coast of Florida.
Last week, he sold the Kid’s CJ5 to a hunting dude down south of here and thehuntingdude wanted thejeepjunkie to have the rust removed from it, at thehuntingdude’s expense. So thejeepjunkie takes the real “5” over to the paint dude’s shop to get this task performed.
Well, as it turns out, thepaintdude is also a corner worker at the Daytona International Speedway during the races they host out there.
In the image above, he is the dude in the lower right hand corner attending to a five gallon bucket.
So, thejeepjunkie is chatting it up earlier this week with thepaintdude and gets the back story on that repair.
Initially, as thepaintdude relates it, the repair using “cold patch” asphalt took much longer to set up as it was rather chilly down here, plus the fact the pothole kept gushing water from the extensive, rare, winter rains we have had in these here parts.
Once the repair was done, thepaintdude tells his superiors to get 15 pounds of bondo, “We’re going to need it.”
So a call was dispatched to the manager of a favorite local paint shop. The manager responded that he was in New Smyrna Beach, about a 45 minute drive away.
“What are our options?” The Powers That Be asked.
“Call the owner, he lives in Ormond Beach.”
Promptly, a member of Daytona Beach’s finest was dispatched to pick up the owner of that highly desired shop and, supposedly, lights ablazing, the owner and the officer in question were heading to that shop and then to the Speedway.
thepaintdude, once that second red flag was thrown, started mixing up that bondo with the hardening material needed, by hand.
That’s right, by hand.
Some dudes are just really dedicated.
Earlier this afternoon, while thejeepjunkie and this olelongrooffan were picking up the “5” to pass it along to its new owners, we were chatting it up with thepaintdude and apparently several International Speedway Corporation and NASCAR executives were going to pay a visit to thepaintdude’s shop.
Stay tuned for more.