Welcome to the Hooniverse News! As always, this is a weekly recap of the biggest stories in the automotive industry without the fluff or bull. This week, the BMW M2 is all grown up with its own CS edition, Audi makes RWD a permanent option for the R8, Audi’s R8 face lift gets applied to the LMS GT4, Roger Penske owns IndyCar and the Indianapolis Motor Speedway now (figuratively and literally), some stuff from SEMA that didn’t suck, and your automotive news for the week. 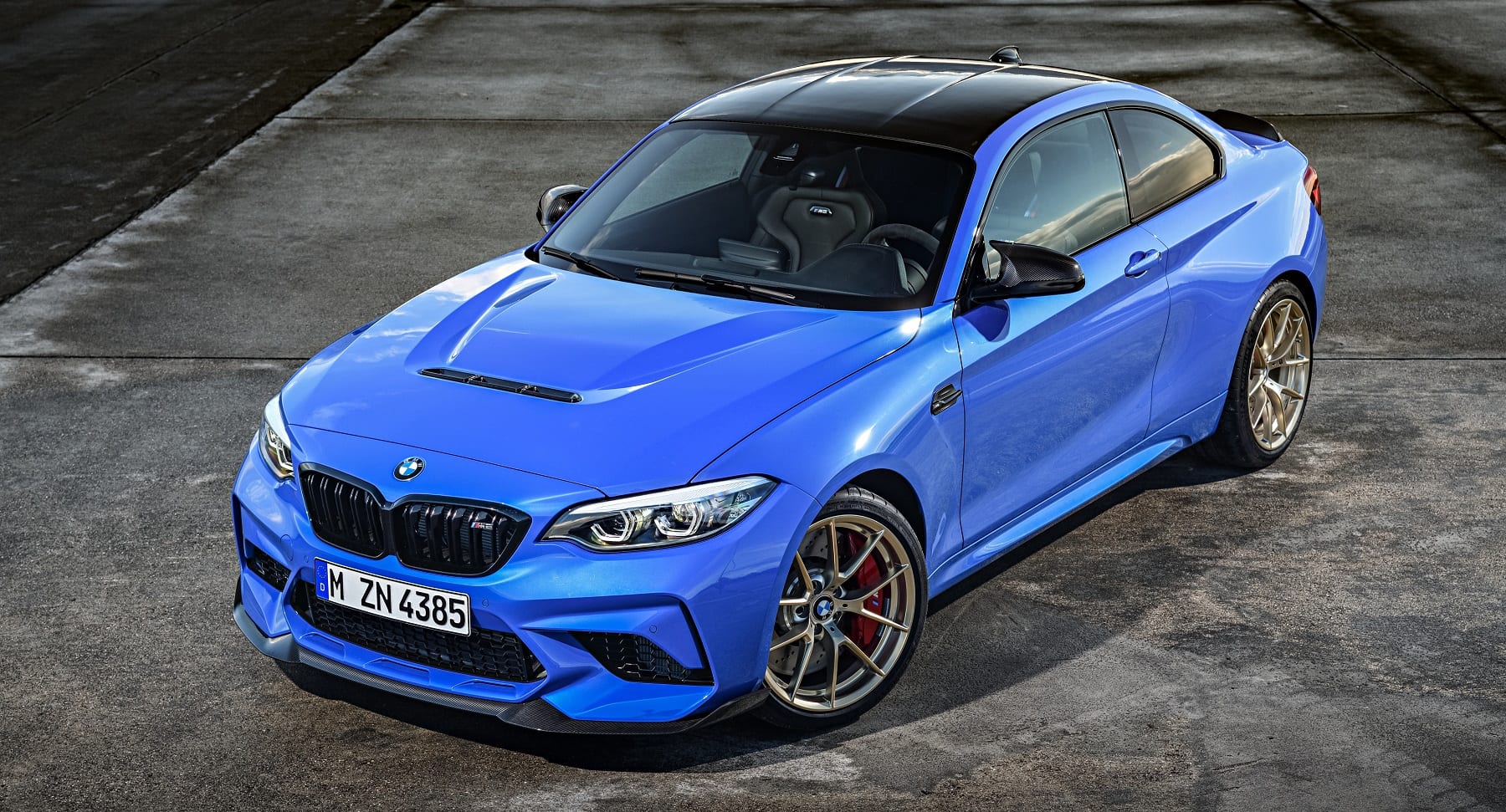 The most beloved new car in the BMW lineup just took a big leap in performance. Loved for not being too big, too ugly, and too dull, the M2 has served as the “entry-level” M car since 2015. but the new BMW M2 CS is anything but entry level. It’s a full upgrade that touches every aspect of the car’s performance, turning a sharp and agile little sports car into an absolute weapon on track. And it’s apparently so good that BMW is only building it for one year.

One of the bigger updates is the new (to the M2) engine crammed under the hood. It has more or less the same twin-turbo 3.0-liter inline-six from the M4 Competition, which means 444 horsepower and 406 lb.-ft. of torque. Along with the new engine comes all of its extra cooling and oil management systems designed for sustained track use as well. BMW will still give you a choice of transmissions here with a six-speed rev-matching manual or a super fast seven-speed M DCT. 0-60 mph happens in as little as 4.0 seconds with the manual or 3.8 seconds with DCT. Top speed is 174 mph. 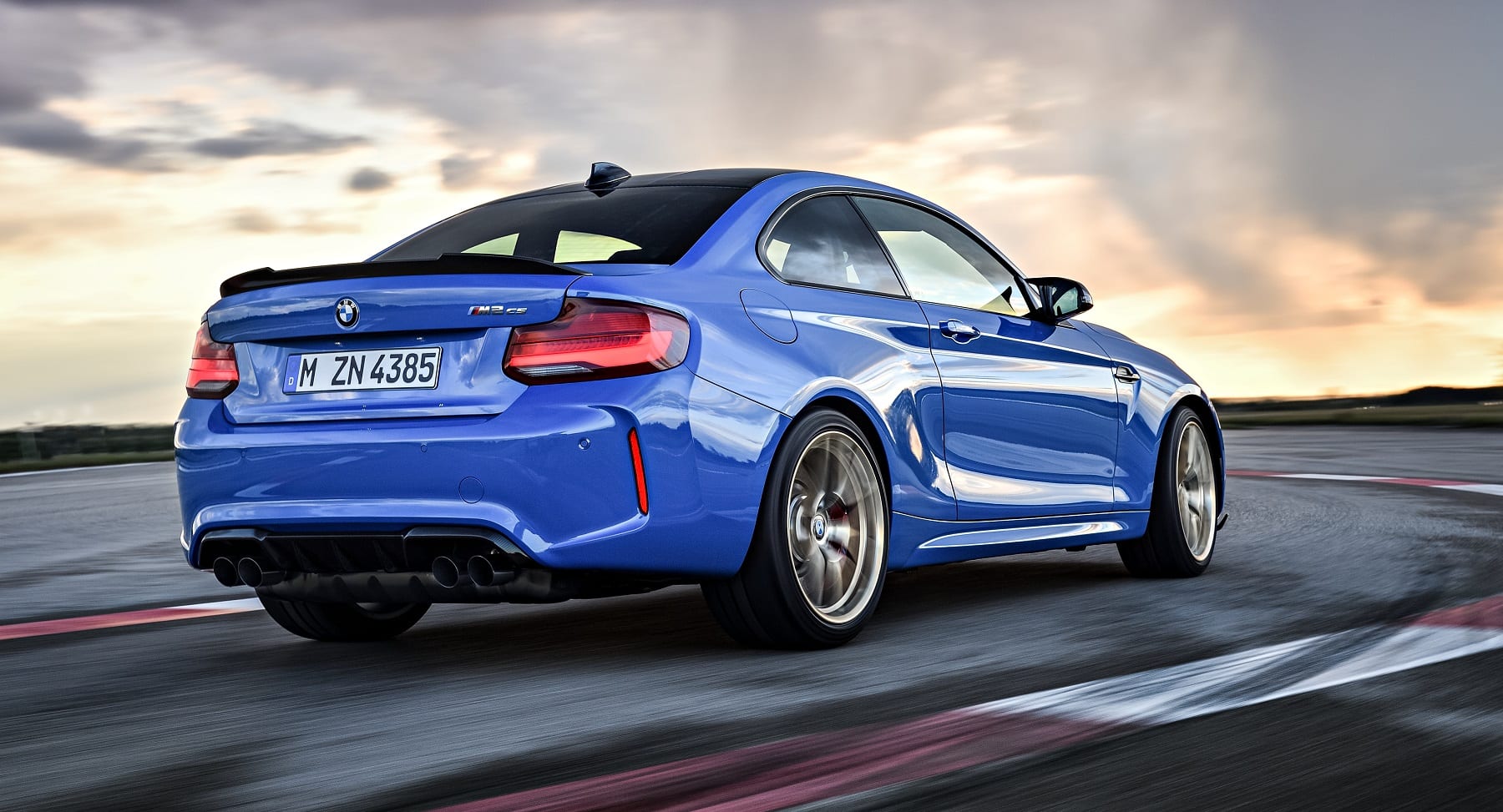 Other go-fast stuff like the Active M locking differential and Adaptive M Suspension may be familiar to M2 Competition owners, but the M2 CS gets a few additional perks. Its standard braking setup consists of M Compound brakes sized 15.75″ front and 14.96″ rear, but you can also add the M Carbon Ceramic Brake option (a first for the M2). Providing clearance for that massive braking system and getting rid of some unsprung weight is a gorgeous set of 19″ Forged Y-spoke wheels that can be had in jet black or matte gold. You can also ask for the impossibly-grippy Michelin Cup 2 tires on said wheels. 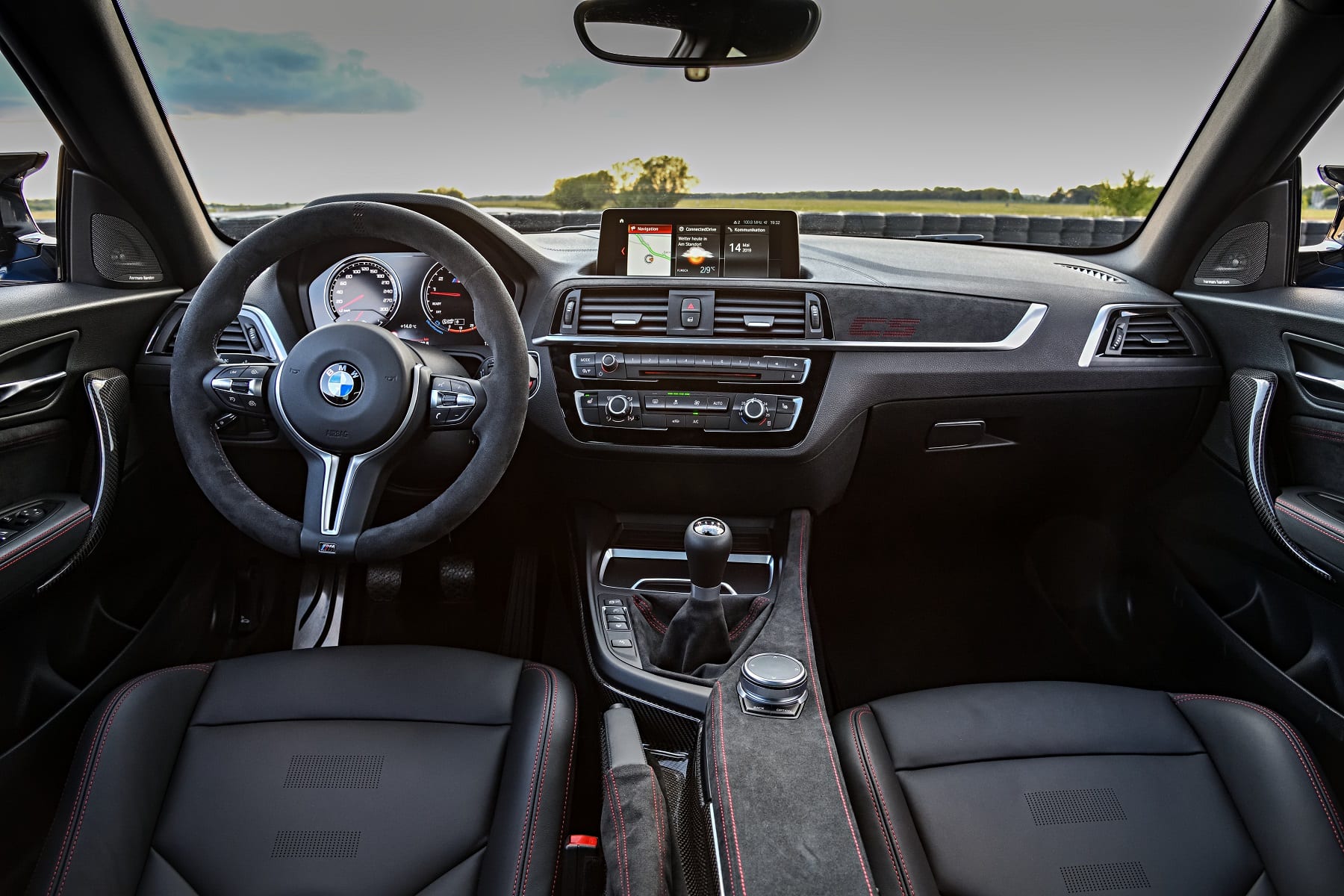 Another M2 CS-exclusive is an extended use of carbon fiber-reinforced plastic on the body. It boasts a CFRP hood and roof to greatly reduce weight up top and lower the center of gravity. CFRP was also used for the new front splitter, rear spoiler, rear diffuser, and side mirrors. They even used CFRP inside for actual weight savings – the transmission tunnel console was remade with the material for a six-pound weight reduction. The rest of the interior consists of the usual blend of leather and Alcantara and contrast stitching. It also comes well-equipped with navigation, Harman / Kardon premium audio, dynamic cruise control, and the universal garage door opener. Your choice of colors consists of Alpine White, Hockenheim Silver Metallic, Black Sapphire Metallic, and the exclusive Misano Blue Metallic.

Pricing hasn’t been revealed yet, but expect there to be a rush to jump in line. Production begins in March 2020 and ends when BMW moves on to the next model year. 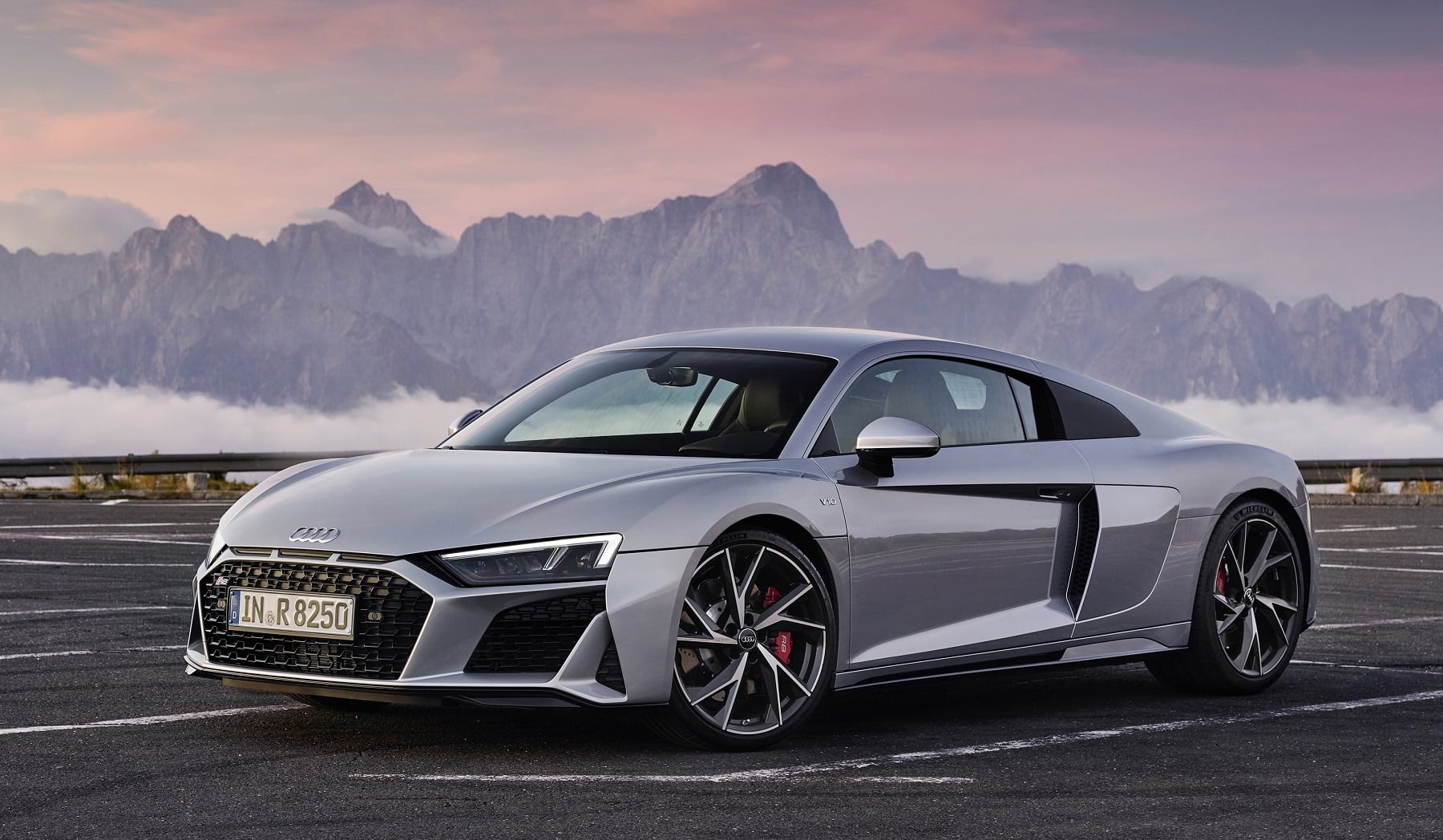 Audi will now offer a rear-wheel-drive R8 as a permanent model following a continued interest from the enthusiast community. Audi first toyed with the idea back in 2018 with the introduction of the limited-edition R8 V10 RWS which promptly sold out. Now what is essentially that same car is part of the standard model range, because the world needs more mid-mounted V10 power being sent to the rear wheels.

Known simply as the R8 V10 RWD, it gets the same sharp looks as the standard R8 V10 that recently got redesigned (the RWS was pre-facelift). There are a few very subtle differences between the AWD and RWD models. The one that is most noticeable has to do with the side blades; the upper half is painted gloss black while the bottom half is body colored. Both halves of the side blades match on the AWD models. The sure way to tell though is to look at the dash in front of the passenger. A shiny “RWD” logo is fitted across from the passenger to serve as a warning that traction control will probably be turned off at some point during the ride. Or perhaps it’s to remind drivers who traded up from other R8s that oversteer will be a thing. 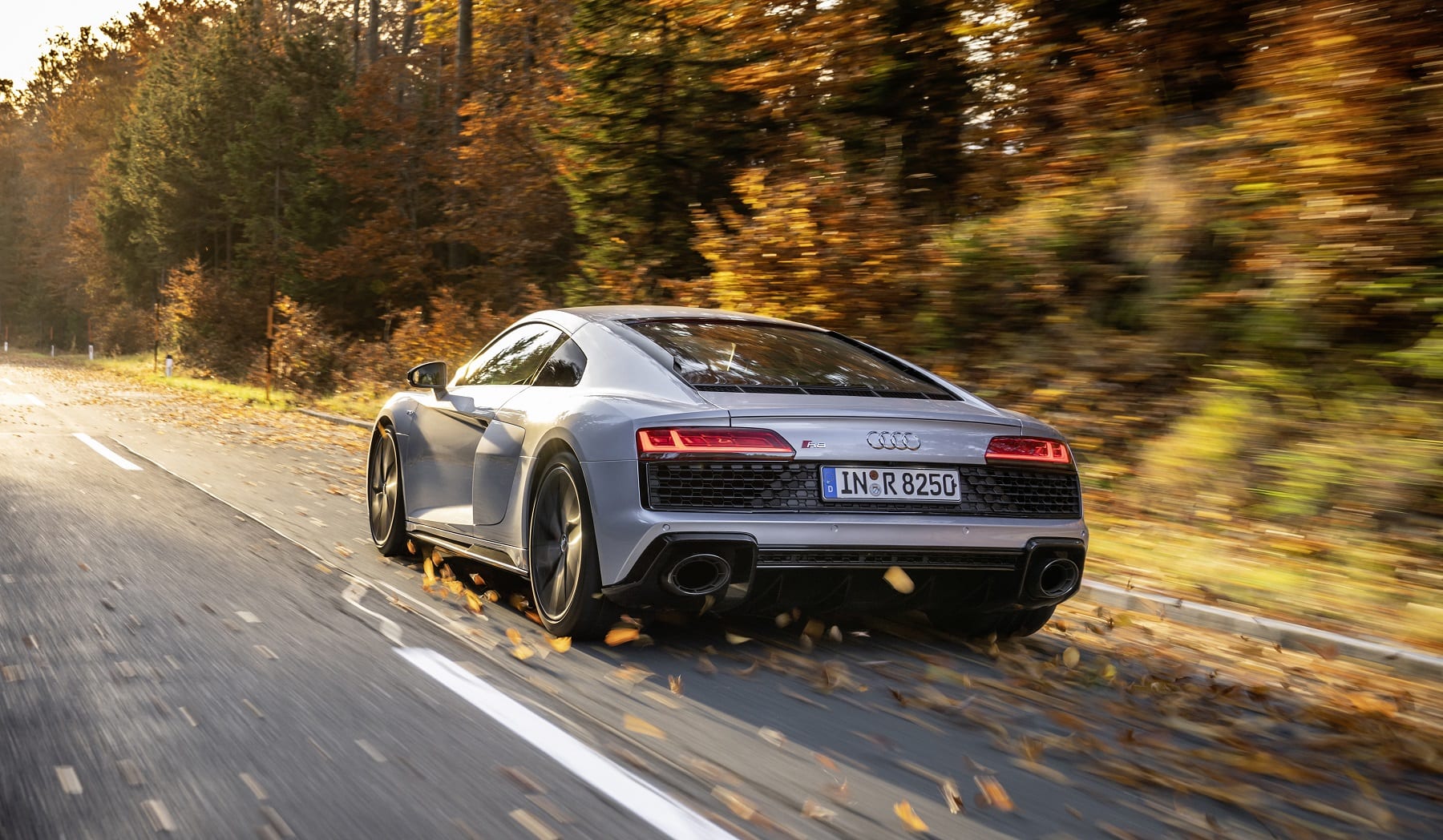 Because Audi doesn’t want RWD owners to have all the fun, the glorious and truly last-of-its-kind 5.2-liter V10 is detuned a bit from the AWD model. Power is down from 562 hp to 533 hp and torque is down from 406 to 398 lb.-ft. Either Audi doesn’t trust us or they’re trying to keep the buyers of the limited and slightly more powerful RWS at least somewhat happy. Regardless, Audi didn’t just lob off a driveshaft and call it a day. Its electronic stabilization control and adaptive suspension has been reworked to allow for a more spirited driving experience which includes drifting. Audi says the R8 RWD provides a very special kind of driving pleasure and we have no reason to doubt that.

Speaking of rear-wheel drive and R8s, the LMS versions have been doing this since the beginning. The latest addition is the updated R8 LMS GT4 intended for customer racing. Because international GT4 regulations haven’t changed a whole lot recently, the car isn’t that much different than last year’s in terms of performance. What it does offer though is a reworked ABS and traction control system with a greater range of adjustability that can be controlled from a new steering wheel lifted from the new R8 GT2 car. The more noticeable change is the new bodywork that matches that of the recently updated road car. Look for it in any of the awesome GT4 races at a track year you next year. 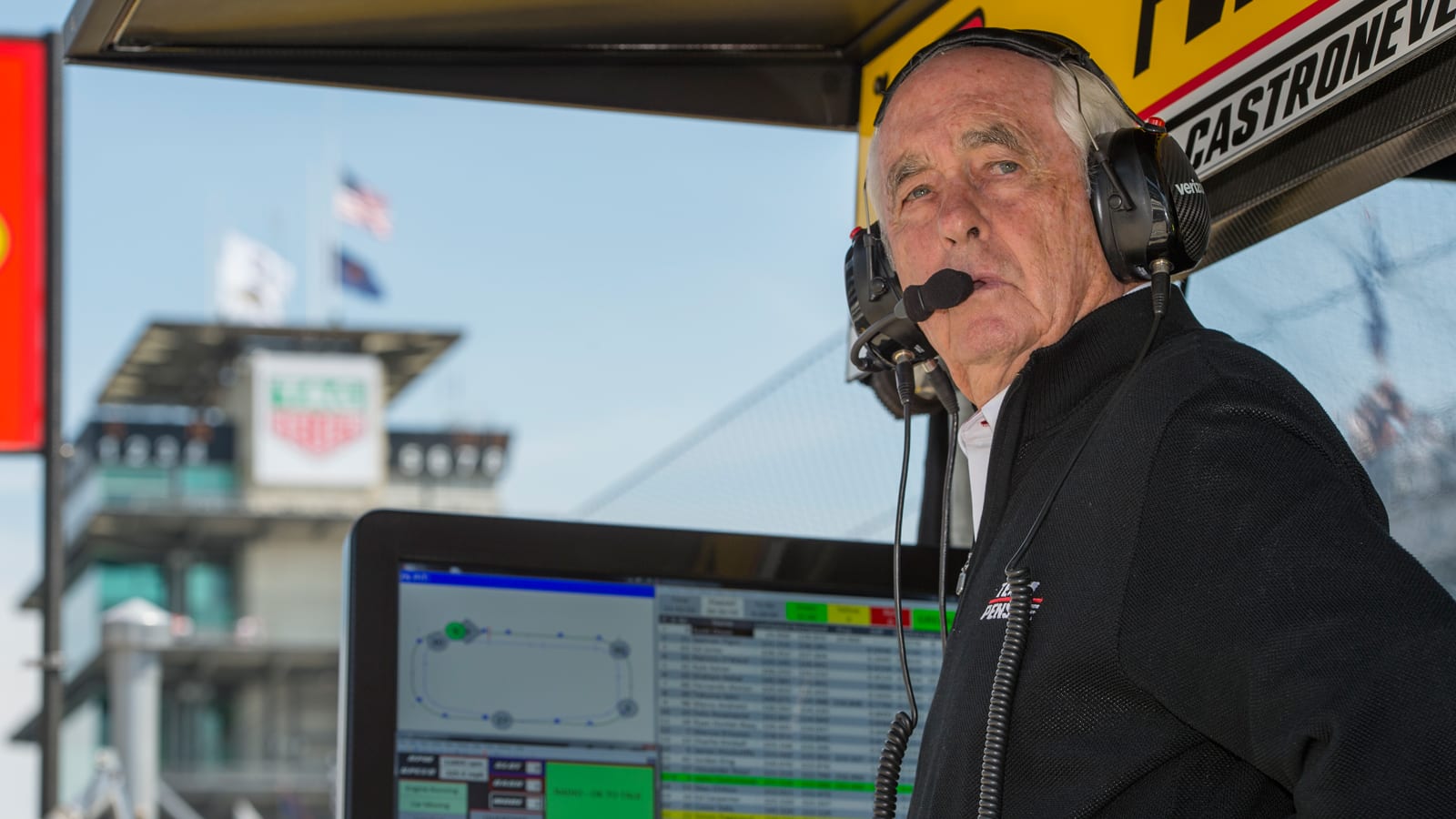 With 18 wins at the Indy 500, you could argue that Roger Penske basically owns Indy. Well… now he actually does. Hulman & Co, who have owned Indianapolis Motor Speedway since 1945 and also run the NTT IndyCar Series, stunned the motorsport world on Monday with the announcement that the speedway and the series were sold to Penske Entertainment Corp.

The deal will formally close in January to allow Penske time to transition and get all his ducks in a row. But in a press conference he already started talking about ideas for the future which include an IndyCar/NASCAR double header, a 24-hour race, more fan zones, and Formula 1. He also acknowledged that he will need to reduce his role in his IndyCar team going forward to avoid a conflict of interest. There’s a lot to unpack from this announcement, but the gist of it is there probably wasn’t a single person more fit for the job than Roger Penske. The reaction has been that of overwhelming support across the board as far as I can tell. Keep an eye on IndyCar if you haven’t… things could get interesting.

Your social media feeds have surely been littered with the good, the bad, and the ugly from SEMA this week. Allow me to filter out some of the weird shit for you with a quick rundown of what was cool and/or relevant at SEMA with an emphasis on quick because I have to wake up early for work tomorrow.

The carbon specialists at SpeedKore teamed up with Magnaflow to build the most ridiculous car at SEMA. It’s a Dodge Charger with a twin-turbocharged Demon engine, all-wheel drive, and a carbon fiber widebody kit. It has 1,525 horsepower. I don’t know what else to say about this. [Source: Car and Driver] 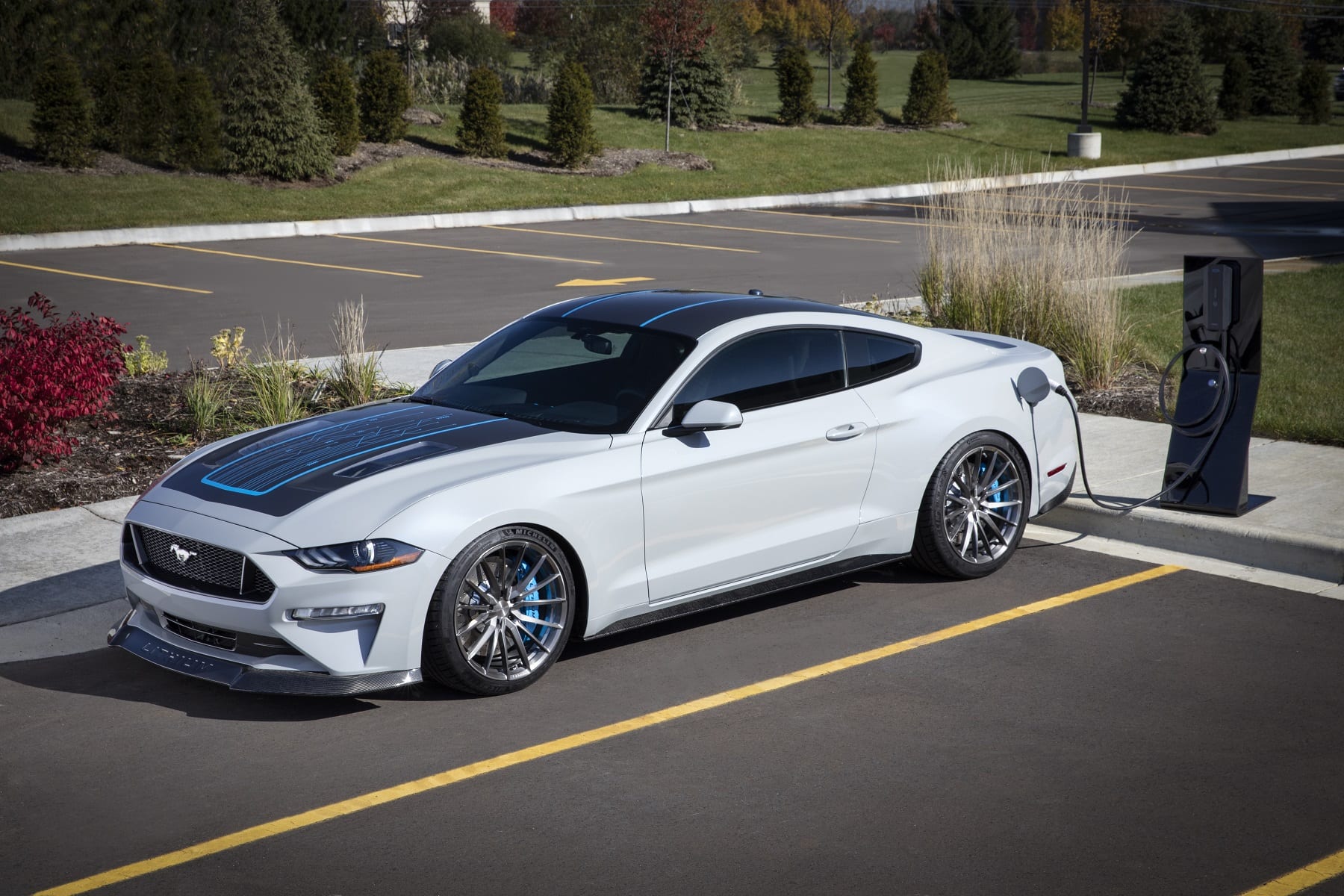 Ford unveiled an electrified Mustang made with the help of Webasto and it’s a quick one. The Mustang Lithium as it’s called features a Phi-Power dual-core electric motor and dual power inverters with power coming from an 800-volt Webasto battery system. It boasts “more than” 900 horsepower and 1,000 lb.-ft. of torque. Interestingly, it still has the MT-82 six-speed manual transmission as found in the regular Mustang but with some beefier components to handle the extra power and torque. So what Ford did here was remove the best part of the Mustang – the Coyote V8 – while leaving the worst part – the MT-82. [Source: Ford] 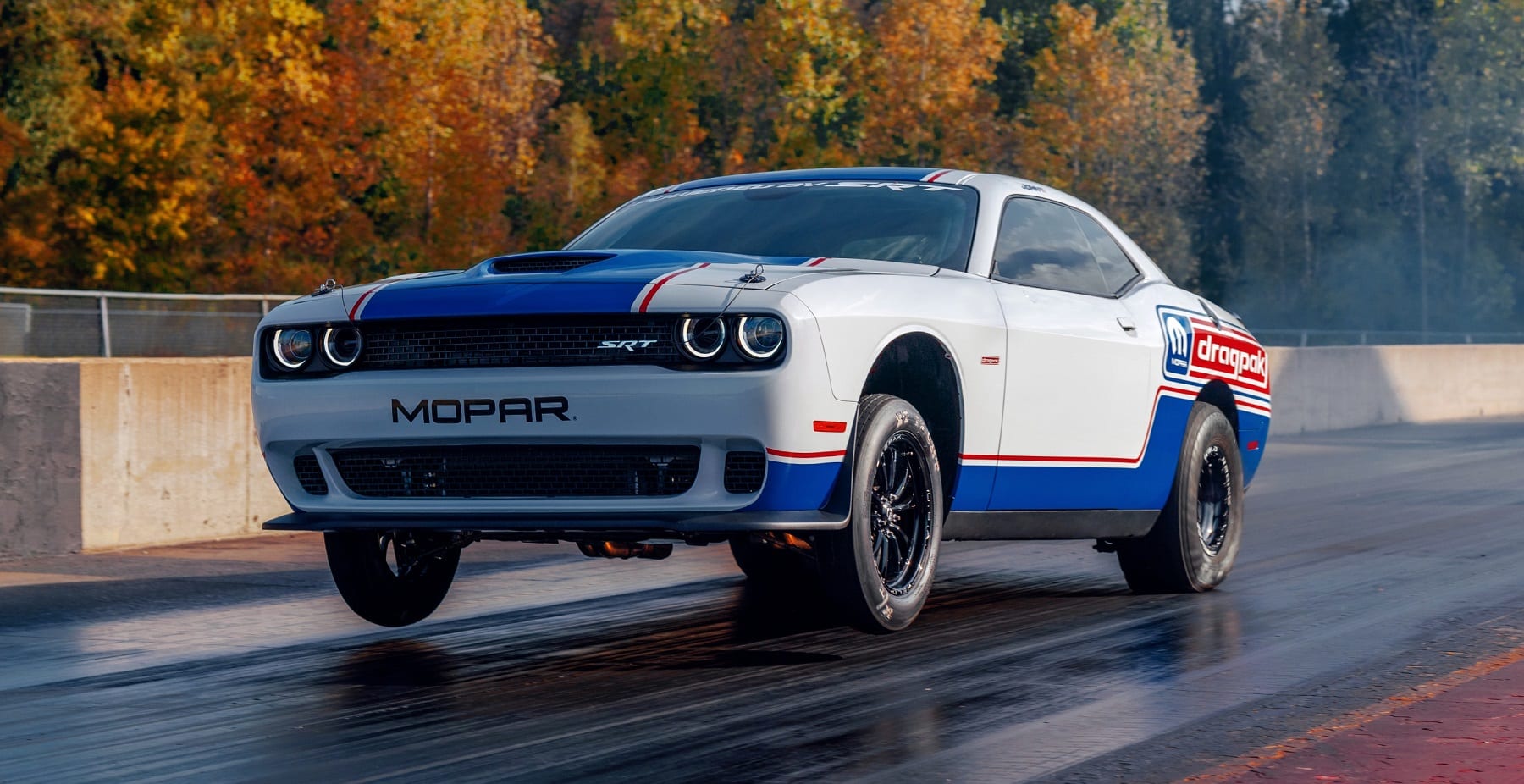 Dodge is bringing back the Challenger Drag Pak, a true turn-key race car that’s eligible for NHRA and NMCA competition. Only 50 examples will be built and they won’t tell us how much power the supercharged 5.8-liter V8 produces, but it should be more than the 1,200 horsepower the last Drag Pak produced. If you thought the dealer markup on the Demons was bad… oof. [Source: FCA] 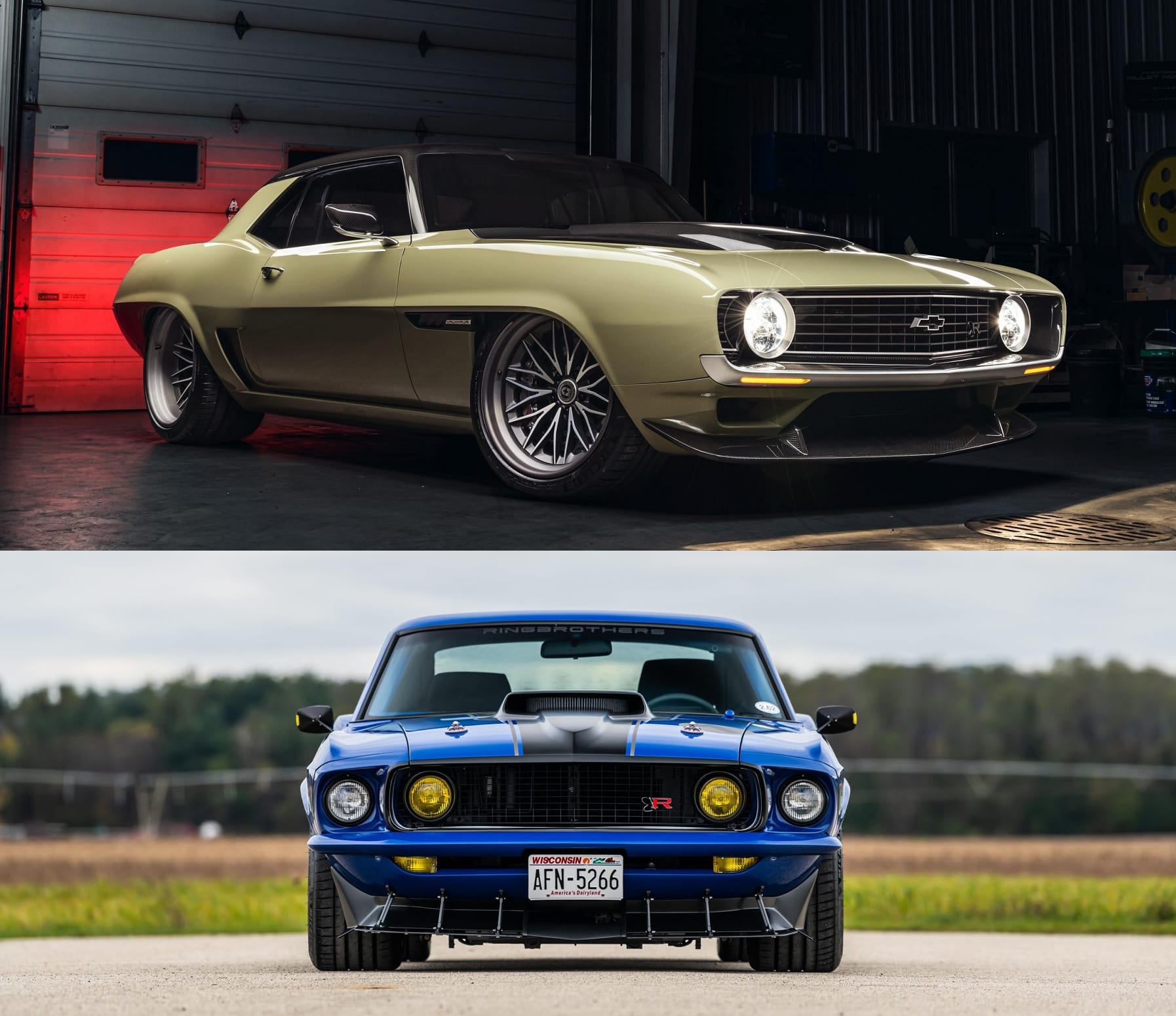 It should come as no surprise that Ringbrothers showed up with the finest restomods on the show floor. Their latest creations include a gorgeous ’69 Camaro called “Valkyrja” and a simply perfect Mustang Mach 1 called “Unkl”. Both builds pack lots of power, excellent build quality and attention to detail, and are simply… perfect. I suggest reading the full story for each on MotorAuthority here and here.