Welcome to the Hooniverse News! As always, this is a weekly recap of the biggest stories in the automotive industry without the fluff or bull. This week: Honda debuts dramatically different Civic in prototype form, Subaru gives us more of a good thing with the new BRZ, Lamborghini blurs the line between race car and street car with Huracan STO, Mercedes-AMG claims production car lap record at the Ring, Jeep makes the V8 Wrangler official, and your news for the week.

Honda has a new car coming and they say it’ll be a big deal. It’s called the “Civic” (sɪvɪk) and they think it’ll be America’s best-selling car. Because there’s so much riding on this, they pulled out all the stops for this one. Shown for the first time this week in concept form, though will likely be a very good representation of the real thing, it’s the 2022 Honda Civic Prototype.

The 11th generation Civic will be maturing quite a bit and moving a little more up market. But it’ll still have the same playful spirit we’ve come to expect from it as shown by their choice to debut it on Twitch. Most of the changes we can talk about this early relate to its styling. It’s comprised of “timeless elements of Honda design”, including a low and wide stance, low beltline, clean and sophisticated detailing, and an open and airy cabin.

The new face of Civic features a cleaner and more sophisticated look now. It’s low and wide stature with strong horizontal elements, including offsetting the upright grille below the headlights, provides the most mature face yet for the Civic. In profile, the Civic’s greenhouse is moved rearward on the body, thus elongating the hood. The upper body design features numerous changes geared towards improving visibility for drivers and passengers. In the rear you’ll see new taillights which draw numerous comparisons to the Audi A3. The back is capped off with a “playfully upswept” yet functional trailing edge to the trunk lid.

Civic’s interior uses some of the same design philosophies of the exterior to provide a clean and uncluttered look. Stretching the width of the dash is a honeycomb mesh accent, which serves not only as a design element, but also conceals the air vents. One of the biggest changes here is the new digital gauge cluster for the driver, a first for the Civic. 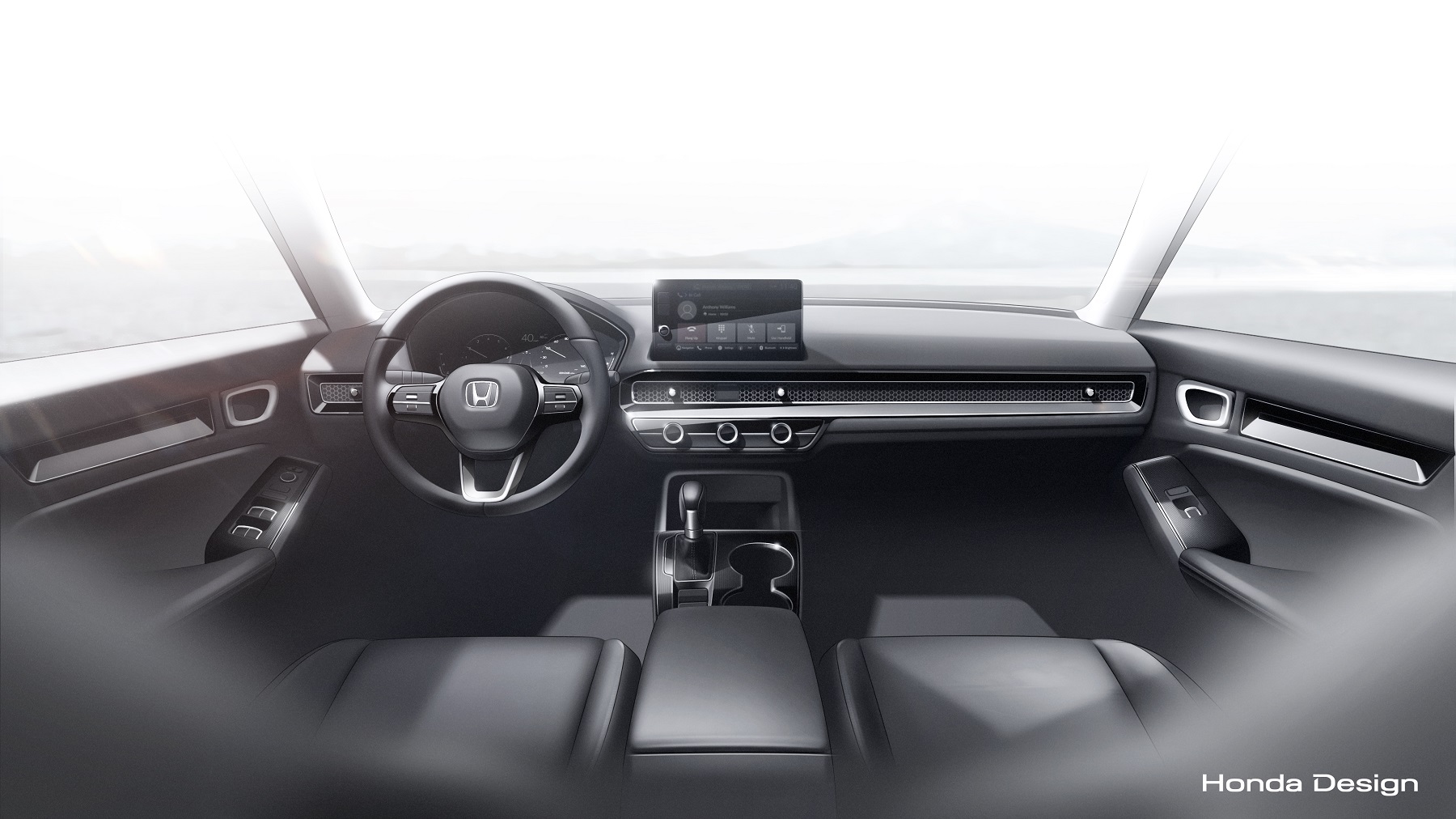 Other details are scarce this early into the process, but we can expect a stronger and more rigid body structure which contributes to its driving refinement, sportiness, and safety. Pedestrian and occupant collision protection will be improved by that as well. Multiple new active and passive safety systems and even some new airbag designs are also expected.

Honda’s preliminary timeline has the production 2022 Civic sedan arriving late Spring 2021 with the hatchback following that a little bit later. The sportier Si and range-topping Type R models will come at a later date.

This wasn’t the only big news for fans of fun and affordable Japanese cars. The other massive announcement came from Subaru who debuted the all-new but not too new BRZ. Don’t let the dramatically updated styling fool you – it’s still the simple, lovable, enthusiast’s car we all fell in love with several years ago.

Subaru was gracious enough to give Jeff a sneak peak and a hot lap in a pre-production car. He’s got that ride along plus all the details we know about it so far in the video above. Check it out if you haven’t yet.

[Source: hey did you know we have a YouTube channel too] 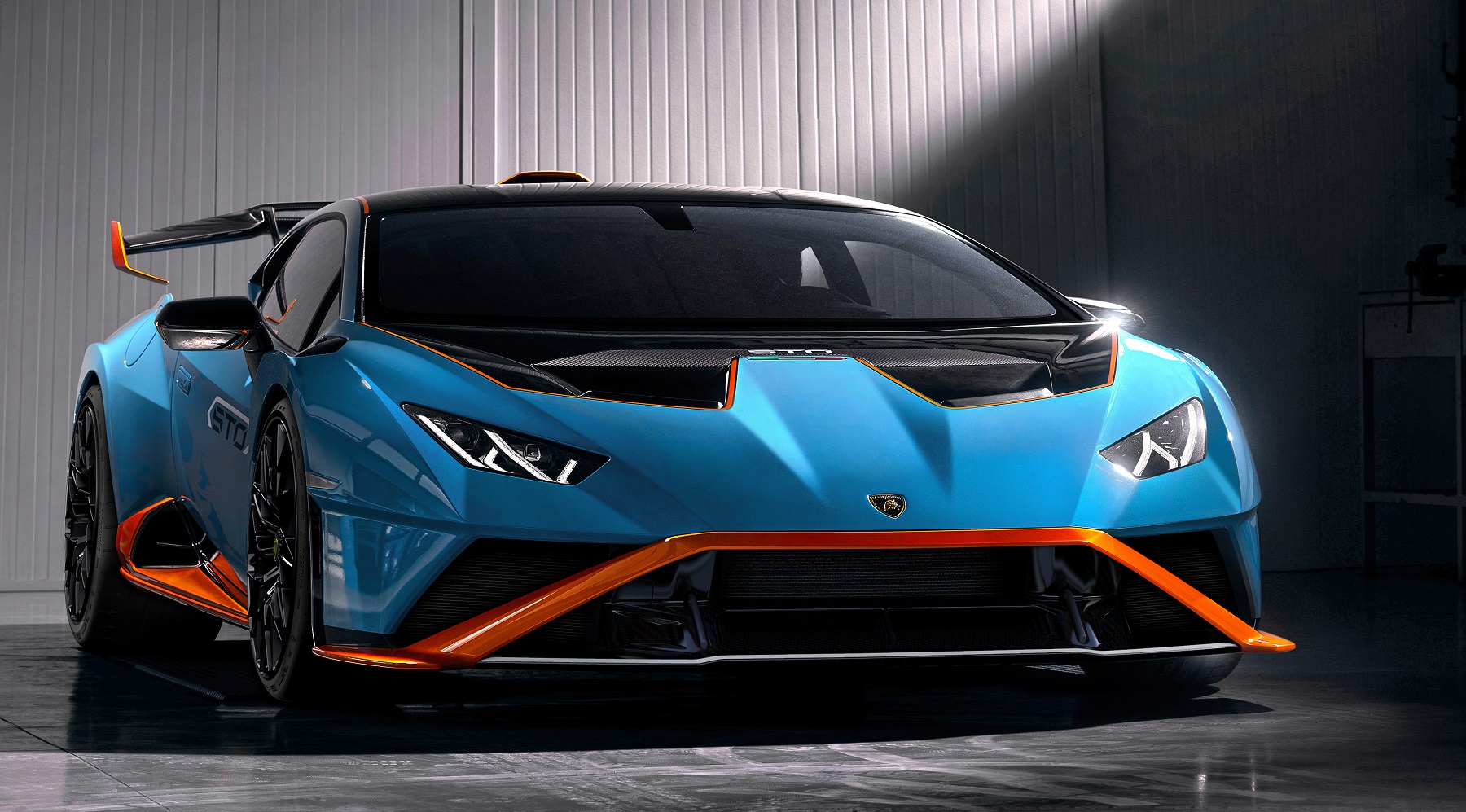 In 1%er news, Lamborghini has come out with another high performance variant of the Huracan. It’s called the Huracan STO, which is short for Super Trofeo Omologata. The best online translator that no money can buy tells me that means “Super Trofeo Approved”. Super Trofeo of course is Lamborghini’s customer racing series that’s done with factory-prepared Huracan race cars. While the Huracan STO remains a street legal supercar, it’s clearly meant to blur that line as much as possible.

The STO formula in a nutshell is more racing tech, more power, less weight. There are few body panels that haven’t been changed and 75% of them are carbon fiber. All of the changes to the body were made with lessons learned from their ST and GT3 race cars are functional in that they either produce downforce, move air in the precise way engineers desired, or provide cooling. 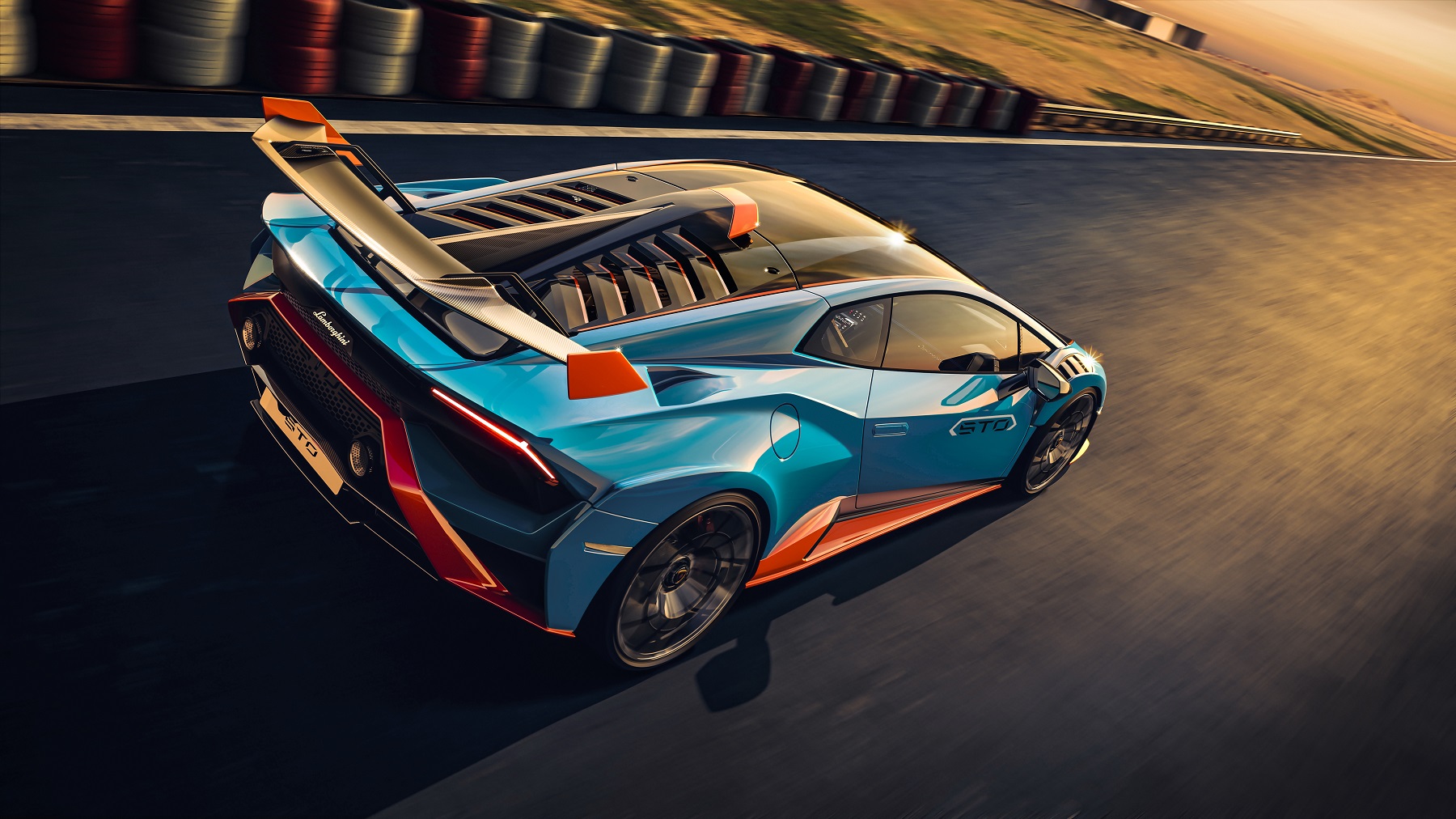 They say it’s all good for a 53% increase in downforce and a 37% improvement in aero efficiency over the current top dog, the Huracan Performante. The Super Trofeo Omphaloskepsis is also a bit lighter than the standard car with a dry weight of 2,952 pounds.

Other performance enhancements include as close to competition-ready suspension and braking as a road car can achieve – for now. MagneRide 2.0, stiffer roll bars and suspension bushing, increased wheel track, and a snappy, fixed-ratio steering rack will certainly make it feel like a race car. Rear-wheel steering and bespoke driver assistance modes will keep things agile and planted. Appropriately-sized Brembo CCM-R brakes provide exceptional durability and stress resistance. Bridgestone Potenza tires in two flavors – one more street focused and one more track-focused – maintain a firm hold on the road.

All of what I’ve talked about so far exist to help tame the mighty V10 that sits at the back. For the Super Trofeo Domo Arigato, this unit produces 640 horsepower at 8,000 RPM and 417 lb.-ft. of torque at 6,500 RPM. Among a 10 ho also been tuned for super sharp throttle response. Lamborghini’s seven-speed dual-clutch transmission sends power to the rear wheels exclusively and does so at a quicker pace than normal. They claim a 0-62 mph time of three seconds flat, a 0-124 mph time of nine seconds flat, and a top speed of 193 mph.

The goal with this car is to provide ultimate track performance in a street legal package. It’s designed to show off as much of the Huracan’s impressive potential using years of data collected from their highly successful racing programs. And in the end it’ll only be driven to car shows by the most annoying internet personalities you can possibly think of.

We haven’t had a new Nürburgring Nordschleife lap record in like, what, at least 2 months? This week Mercedes-AMG was the latest to take the crown and have the new AMG-GT Black Series recognized as the new fastest street-legal series production car. Lap records are now getting tallied in two ways it seems, a lap with and without the small straight in section T13 of the track. T13 is where the old pits are and is traditionally the start/finish line of the Nordschleife.

So the lap time when measured without the straight at section T13, the car ran a time of 6:43.616. With that straight at section T13, the time is a 6:48.047. It seems they just started measuring lap times this way fairly recently. The brave driver behind this feat was GT3 racer Maro Engel who is intimately familiar with the Green Hell. It’s an impressive lap and an impressive feat by the AMG engineers. Watch the lap above. 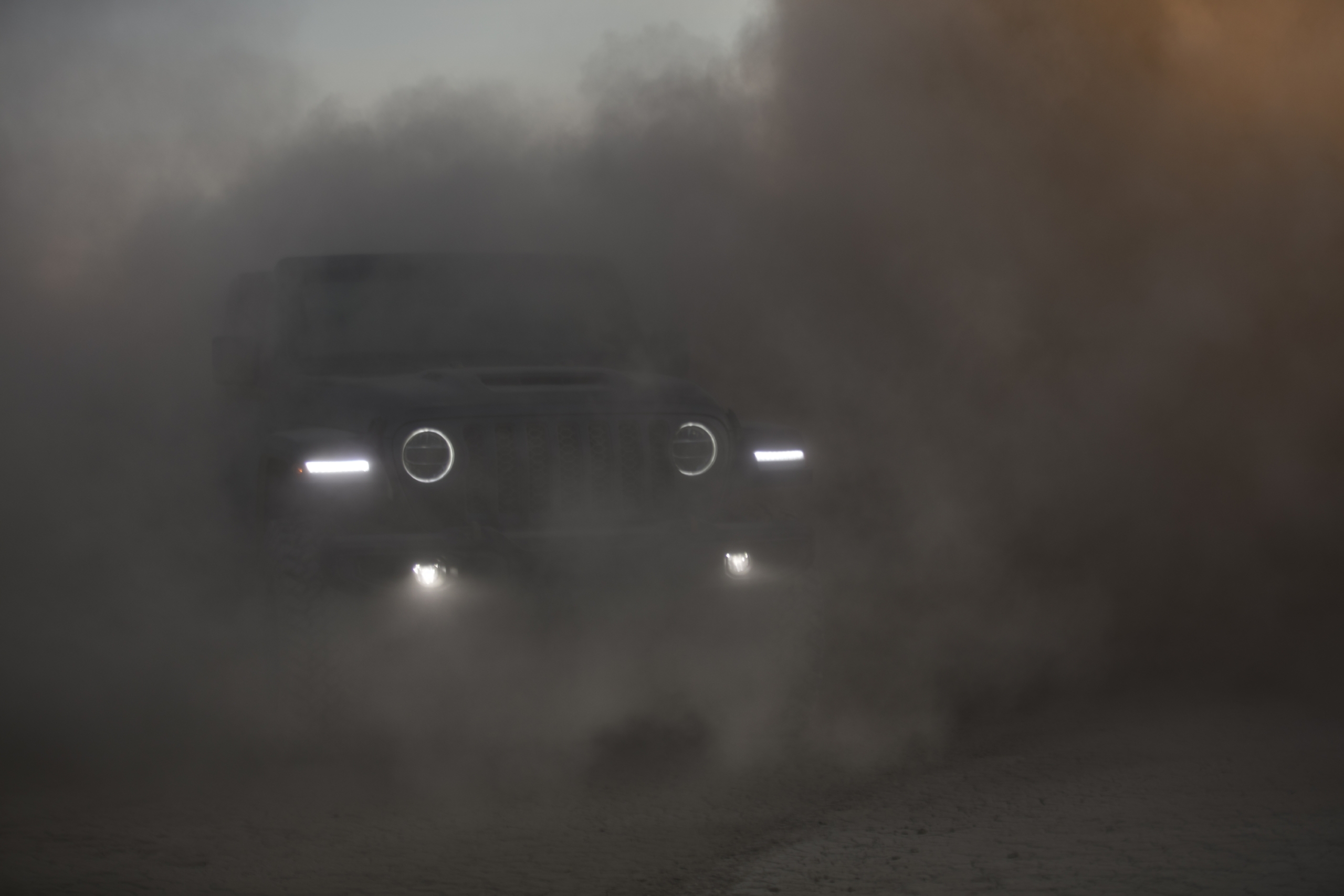 Shortly after Ford broke the internet with the new Bronco announcement, Jeep fired back with something so on brand that it was impossible not to appreciate it at least a little bit. They showed off a teaser/concept/whatever of a V8-powered Wrangler that was intended for production. Well this week they brought that a little closer to reality. One of our resident off road experts has the lowdown here in case you haven’t seen it yet.