Welcome to the Hooniverse News! As always, this is a weekly recap of the biggest stories in the automotive industry without the fluff or bull. This week: Porsche still believes in the long roof and debuts Taycan Cross Turismo, Volkswagen celebrates 45 years of the Golf GTI, Volkswagen teases an ID.3 Cabriolet on Twitter, and Stellantis is open to dropping the Cherokee name from its Jeep models.

One of Stuttgart’s worst-kept secrets has been that some sort of wagon variant was coming to the Porsche Taycan. It had been seen in spy shots and even debuted as a soft-roader concept a few years ago. But given how poorly wagons or anything that isn’t a truck, an SUV, or a taller, fatter sedan masquerading as a crossover sells these days, it had an uncertain future. Well evidently the also long-roofed Porsche Panamera Sport Turismo sold well enough (read: more than one) to warrant something similar for the Taycan. This bit of fan service arrives this summer and can be configured for light off road adventures, as sensible family hauler, or as a blazingly-quick canyon carver.

The Cross Turismo specification is available on every existing all-wheel-drive Taycan model. That means the Taycan 4 all the way to the still-not-a-turbo Taycan Turbo S. With each of those comes dual-motor all-wheel drive, two-speed rear transmission, Porsche Adaptive Suspension Management with air suspension plus a 20 mm increase in ride height, Performance Battery Plus and its 800-volt architecture, adaptive aerodynamics, panoramic glass roof, and Porsche’s PCM infotainment system. Everything but the shape of the body is the same as what’s found in a comparable Taycan sedan, but there is a Cross Turismo-exclusive Off Road Design Package which took direct inspiration from the original concept. 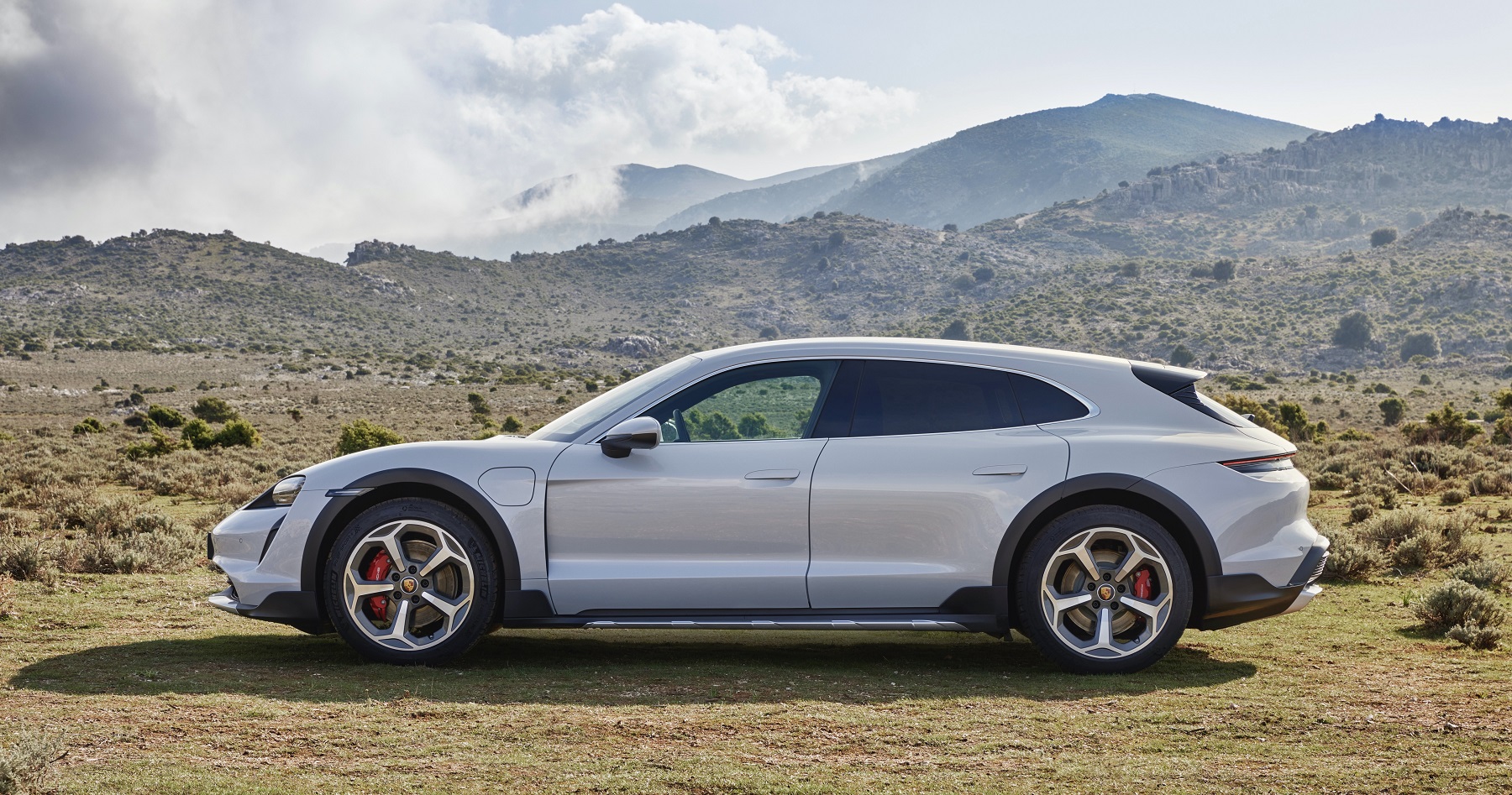 What that adds is body cladding to protect against rock chips and it raises the ride height by another 10mm. Porsche admits this won’t be a rock-crawling go absolutely anywhere kind of off-roader like a Jeep or a Raptor, but it is well suited for any reasonably beaten path. It has an additional drive mode designed for a variety of loose surfaces like gravel, mud, and sand. This mode raises the ride height an additional 10mm (on top of what is already added by the package) and optimizes the suspension firmness, traction and stability control, and the torque management system to provide as much grip and security as possible. From what I can tell this package does not change the tire selection so there’s potentially some additional capabilities you can achieve with a tire swap. But on the other hand, Taycan not-a-Turbo S Cross Turismo. It can accelerate from 0-60 mph in 2.7 seconds, just a tenth slower than its sedan counterpart. The slowest Taycan Cross Turismo to 60 is the Taycan 4 model, but that’s still a very respectable 4.8 seconds we’re talking about. 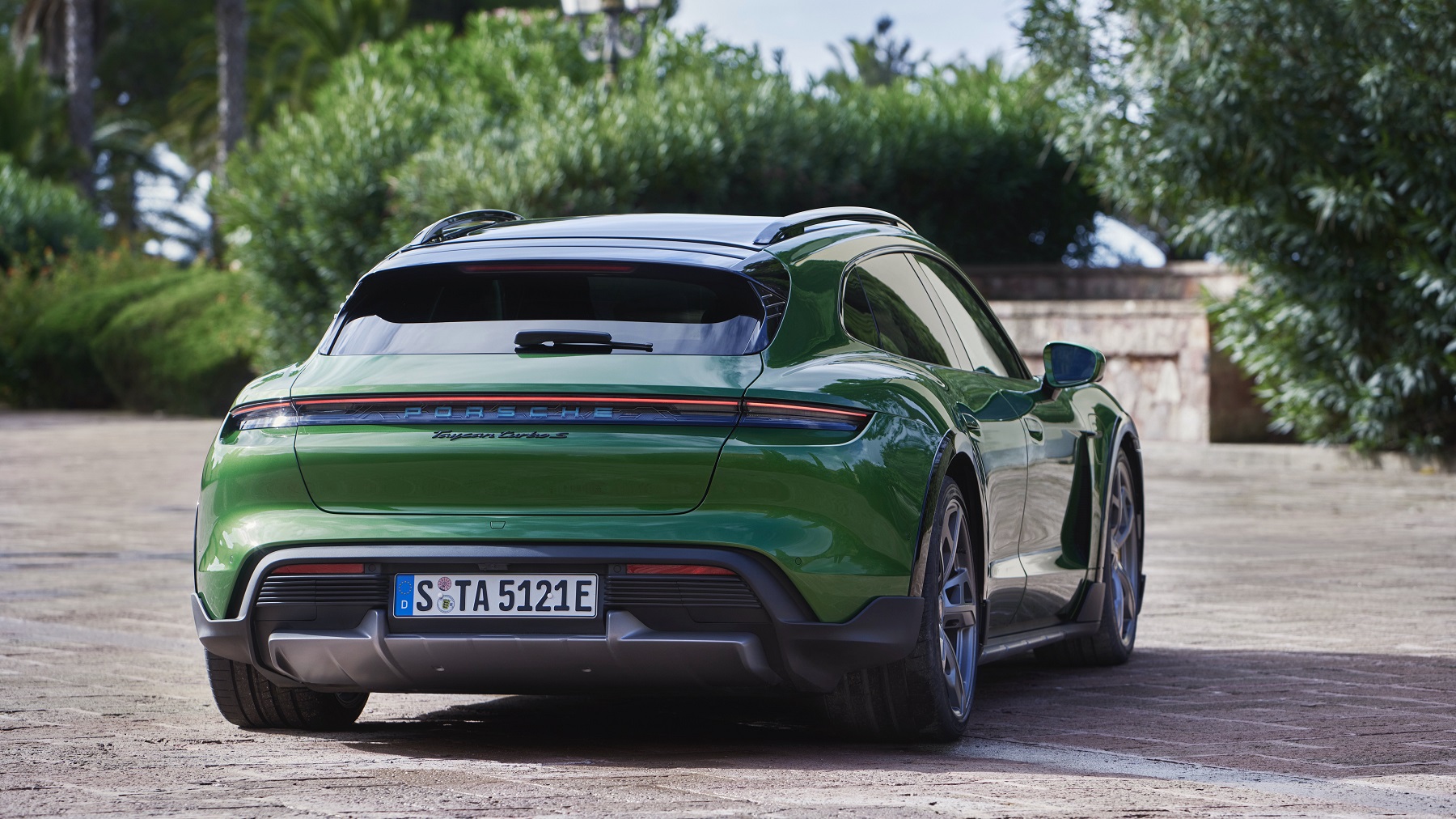 What you gain by opting for the Cross Turismo spec increased headroom for passengers in both rows (the back row by 3.62 inches) and more cargo space. On the 4 and 4S models you get 15.7 cubic feet. Opt for the still not-a-Turbo models and that shrinks a bit to 14.3 cubic feet. Fold down the rear seats and that allows for up to 42.8 cubic feet of space.

The gorgeous Taycan Cross Turismo range starts at $92,250 (including destination) for the Taycan 4 model. In Porsche fashion, the prices skyrocket from there basically the instant you touch something in the configurator. 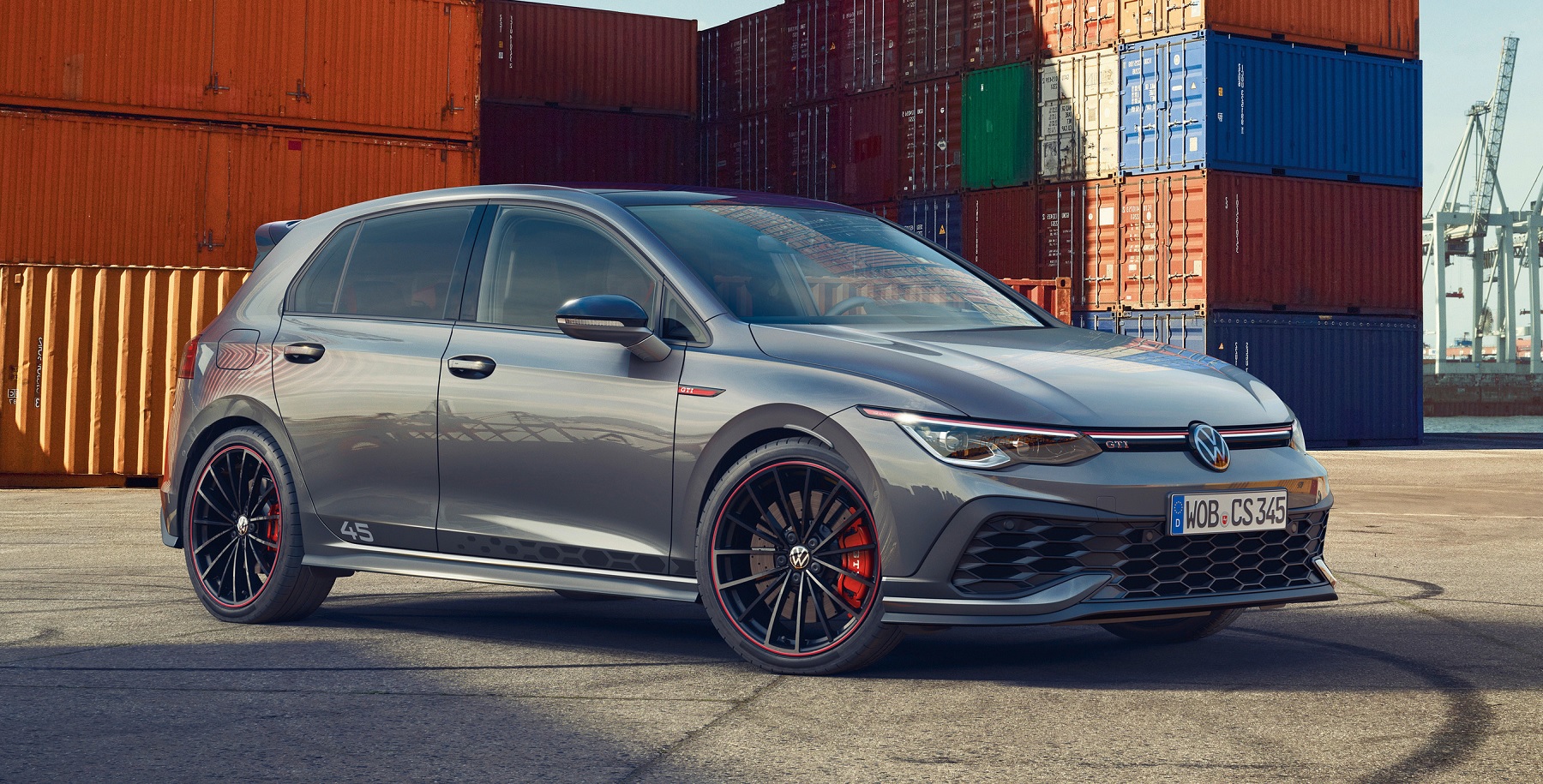 Imagine spending around $57,000 on a Golf GTI. Unless you live in Germany you won’t have to because Volkswagen is keeping this 45th birthday party restricted to their homeland. Yes, one of the world’s most beloved performance cars is turning 45 this year in case you wanted to feel old. Since the GTI has always been a modest car, this GTI Clubsport 45 is essentially some light performance enhancements, graphics, and two tone paint on top of what’s already the quickest GTI from the factory (which the US also doesn’t get) with 296 horsepower. 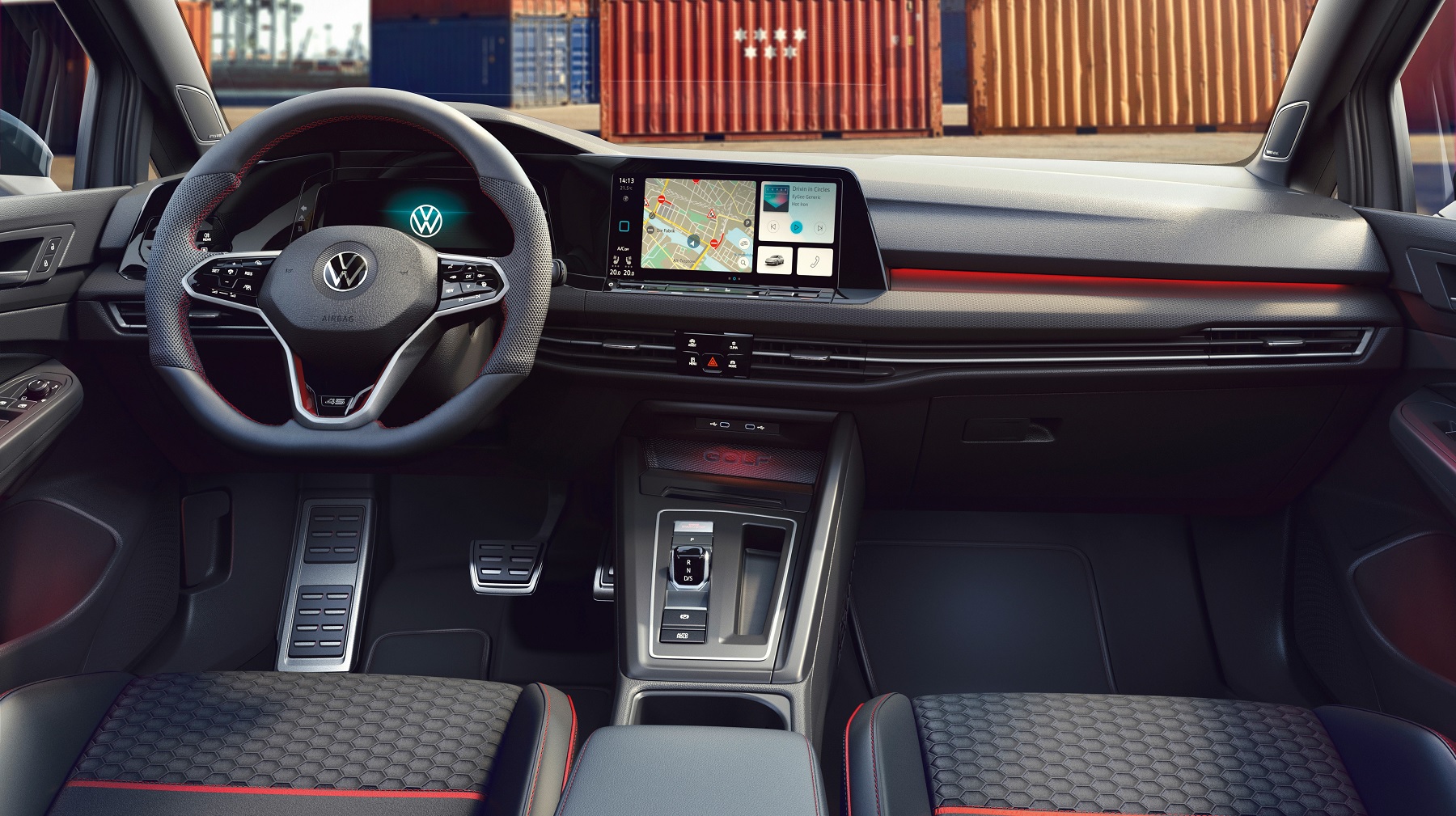 Compared to the standard GTI Clubsport, this package is approximately $7,000 more expensive. That gets you larger air intakes, a unique roof spoiler, sport exhaust, new wheels, interior upholstery, and the graphics package. As brilliant as everyone knows the GTI is, this version gets precariously close to what a BMW M135i and a Ford Mustang GT goes for in Germany. But in fairness, it’s a limited edition model aimed at the diehard enthusiasts and lovers of the GTI brand. With how pricey cars are in Europe in general, I’m positive VW will sell every GTI 45 they can build.

In the meantime, America will continue to enjoy its slower, outdated, but still sub-$30,000 GTI until VW decides it’s time to give us the new Golf already for the love of god. Seriously, the new Mk8 Golfs have been in Europe since the end of 2019. I know VW is still pissed at us about the whole dieselgate thing but there are still enthusiasts buying cheap performance hatchbacks and the Golf GTI is one of the only options we have left. We need this. 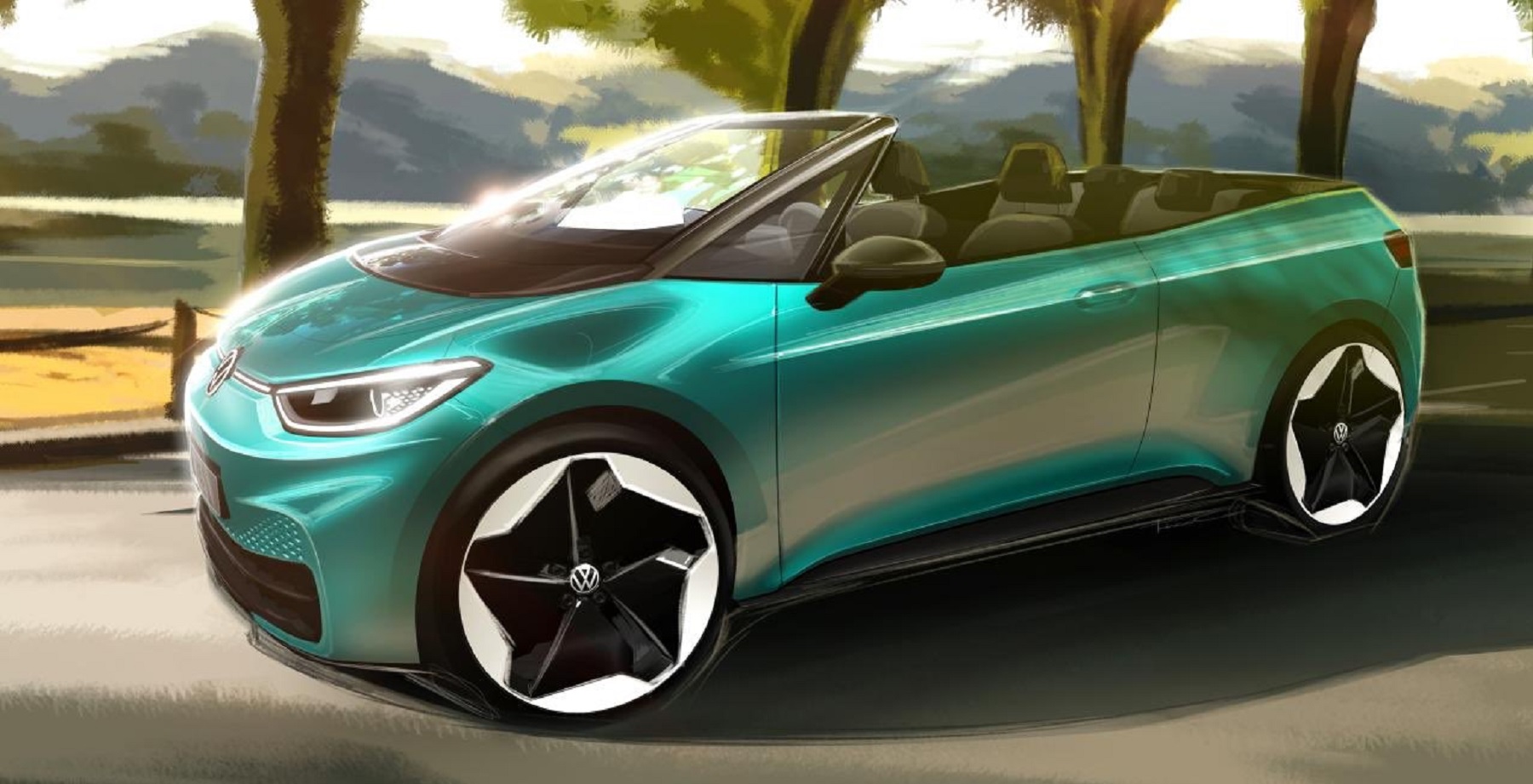 With Volkswagen going full speed ahead on electrification and their new ID brand, we’re starting to see signs of something called “fun”. VW Group chairman, Herbert Diess, announced on Twitter they were thinking about an “e-convertible, maybe a VW ID3 convertible”. It’s clearly something that they’re actively discussing because it wasn’t just words – it was a couple of renderings too. The images show a teal/turquoise compact convertible which gives off strong Golf Cabriolet vibes even without the signature roll bar at the b-pillar. These renderings don’t appear to be a quick photoshop job of an existing model which would tell me that some significant thought was being put into it. Jalopnik found further evidence from VW passenger car CEO Ralf Brandstätter who confirmed the company is “pondering how to turn this attractive concept into reality”. Then there’s the obvious question of which markets would receive it… if you guessed not America, you’re likely correct. But still, the world may soon get its first affordable convertible EV if VW wills it. 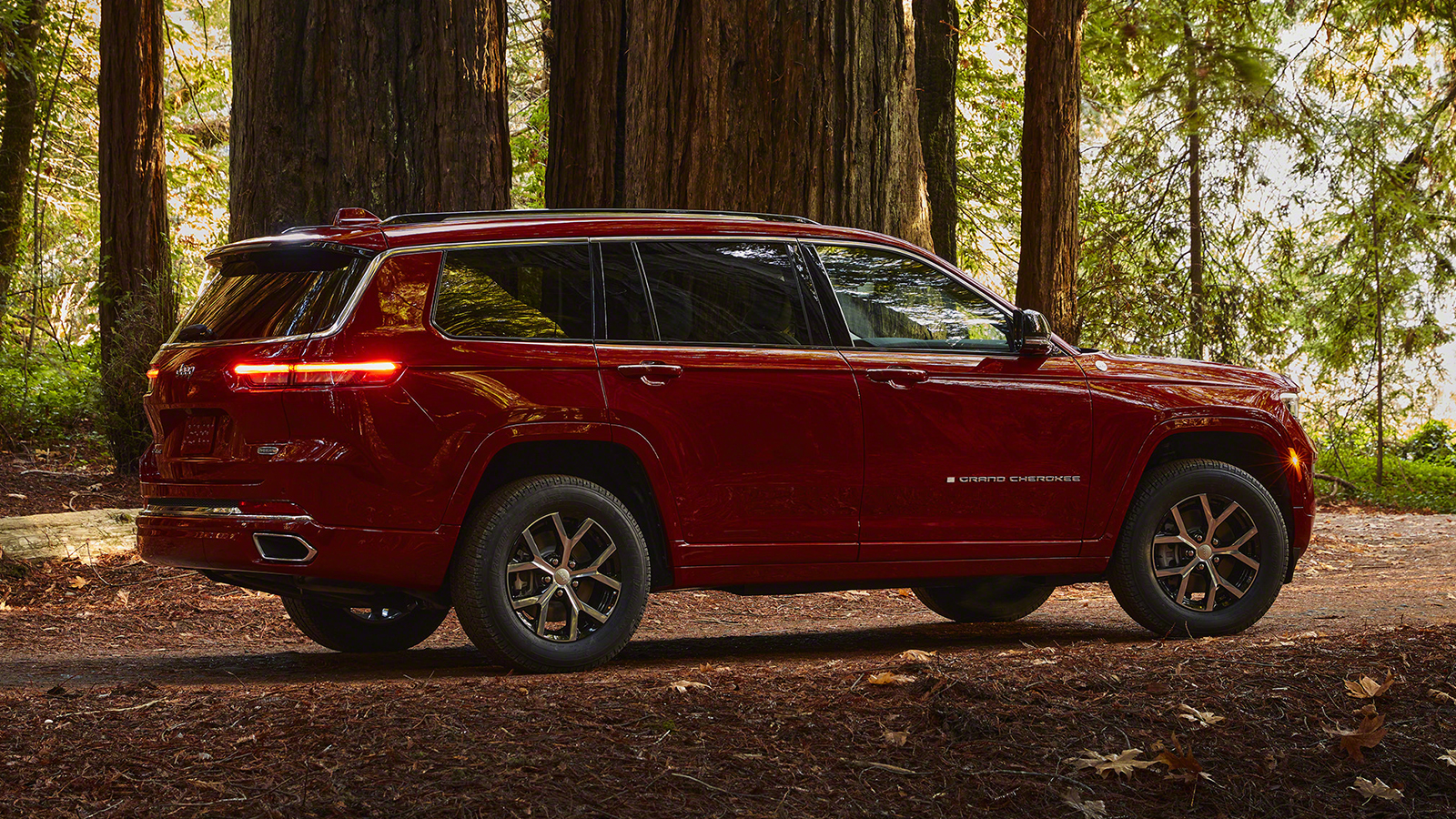 So here’s a topic I’ve been sort of attempting to avoid until more info came out. Jeep has been using the Cherokee name on various models for decades. Currently there are two with a third on the way: the mid-size Cherokee, one of their most popular models, the Grand Cherokee, and the bigger and more luxurious Grand Cherokee L. Numerous industries have been facing a reckoning in recent years regarding the origins of names and/or logos that we’ve been gleefully using. Within the last couple of weeks, that focus has turned to one of Jeep’s most recognizable nameplates – I’d say the second most popular name behind the Wrangler.

Talking to Car and Driver, Chuck Hoskin, Jr., principal chief of the Cherokee Nation, expressed a desire for Jeep to stop using their name. “I’m sure this comes from a place that is well-intended, but it does not honor us by having our name plastered on the side of a car,” he said, adding that “the best way to honor us is to learn about our sovereign government, our role in this country, our history, culture, and language and have meaningful dialogue with federally recognized tribes on cultural appropriateness.”

Jeep has been using the Cherokee name in one way or another for about 47 years while the Cherokee Nation (not including the countless indigenous people in the tribe before it) has been established for over 181 years. That’s just a little bit more, isn’t it. 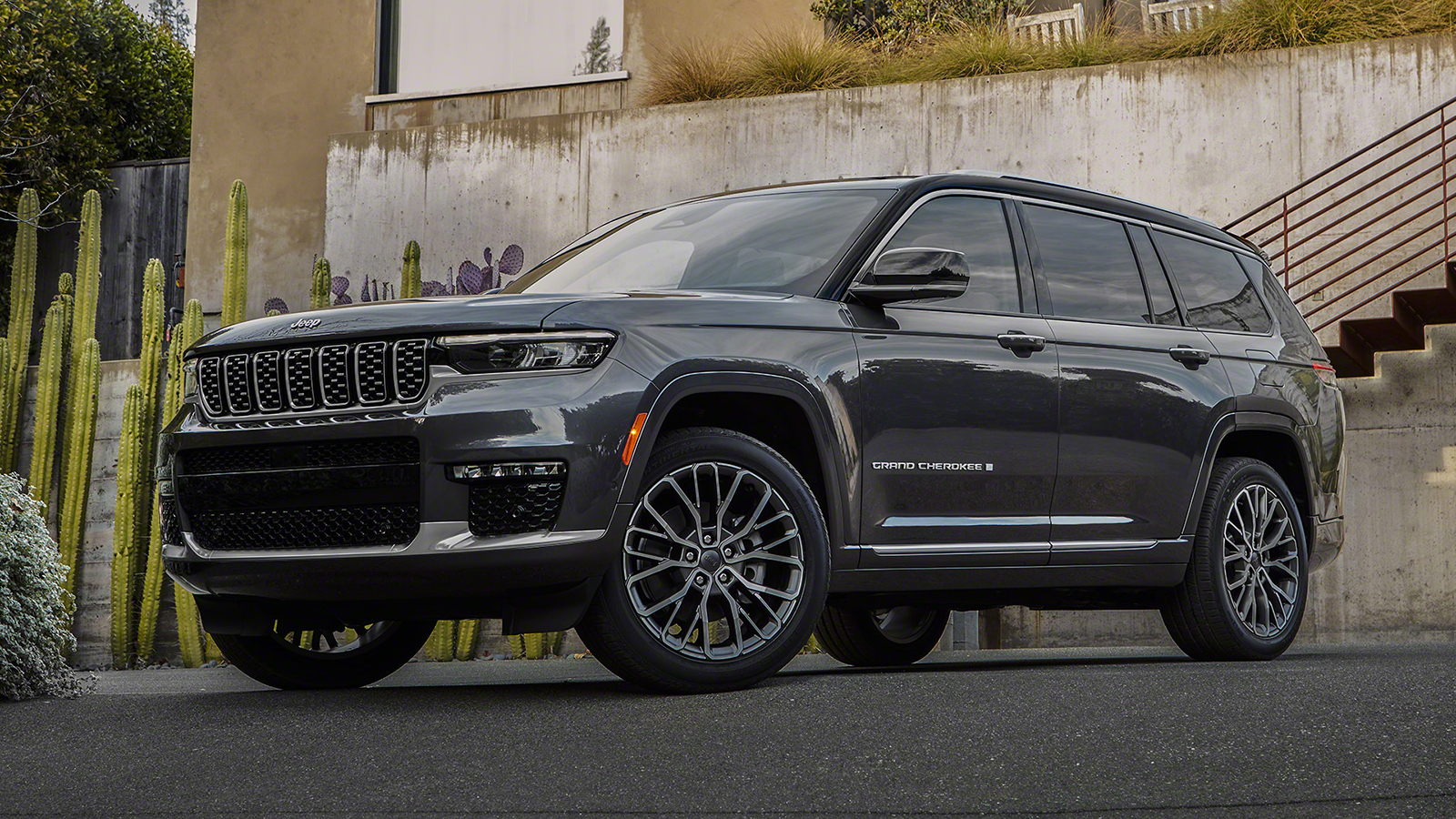 Initially Jeep was pushing back as one normally would when asked to stop using a name that’s been so closely associated with a brand for nearly half a century. But it appears that they’re starting to come around to the idea. “Our vehicle names have been carefully chosen and nurtured over the years to honor and celebrate Native American people for their nobility, prowess, and pride. We are, more than ever, committed to a respectful and open dialogue with Cherokee Nation Principal Chief Chuck Hoskin, Jr,.”, reads a statement from Stellantis. And now according to a new report from The Wall Street Journal (via Roadshow), Stellantis CEO, Carlos Tavares, said they are “ready to go at any point” and are already engaged in dialogue with the Cherokee Nation.

It’s too early to tell which way Stellantis is leaning. They’ve invested a lot in that name and could still be trying to save it with the Cherokee Nation’s blessing. Its impact on the brand would be similar to Ford being asked to stop using the Mustang name. The car is still there but all that brand recognition goes out the window. But times are changing and we’re all having to take a step back and reflect on whether we’ve been unknowingly hurting others with practices we once thought were harmless. It’s clear that it’s time for Jeep to retire the name. They aren’t going to win this battle and they know it.

But then again, Jeep’s new parent company is called Stellantis so can we really trust them to be the authority on good names?