Welcome to the Hooniverse News! As always, this is a weekly recap of the biggest stories in the automotive industry (or whatever wasn’t impacted by the coronavirus) without the fluff or bull. This week, Hyundai stuns with the all-new Elantra, eClassics turns their attention to the original VW Microbus with an EV conversion, more shit cancelled by the coronavirus, and how automakers are helping.

“While some manufacturers no longer see the value in the car side of the business, we’re doubling down”, said José Muñoz, president and CEO, Hyundai Motor America. The Elantra, which has been one of their most popular sellers with 3.4 million units sold in America, is getting a major overhaul for the 2021 model year. And I mean a major overhaul. It sports a new design which makes it look like a completely different car, has a hybrid option for the first time, and offers more interior space. It should shake things up in the compact sedan market in Q4 this year.

Let’s start with that design. Designers began the overhaul by reworking the dimensions a little. The wheelbase grows by 0.8 inches and the overall length is increased by 2.2 inches. It’s also an inch wider, 0.8 shorter in overall height, and the cowl point was moved back almost two inches. It’s enough to make the car look a little less “compact” and more like a midsize sedan. Speaking of the new design language in use, Luc Donckerwolke, executive vice president and chief design officer, the described the new Elantra as being “highlighted by its stance that looks like geometric crystals and divided body surfaces to get a strong emotional response”. That’s perhaps best demonstrated along the side where three lines meet at one point which is a pattern that you can see at various spots on the car.

The same sort of design philosophy is carried throughout the rest of the car. The front features a new wide cascading grille with a parametric jewel pattern. It also makes good use of a forwarded profile with a longer and lower hood for the whole “four door coupe” look. The rear end is dominated by a wide, horizontal line extending across the trunk which connects the H-pattern tail lamps. Wheel sizes range from 15-17 inches with designs that match the “Parametric Dynamics” theme of the car.

The interior design features an “immersive cocoon” layout with low, wide structures that envelop the driver. There’s a large interface consistent of two connected 10.25-inch displays, one which serves as a gauge cluster and one angled touch screen in the center for the infotainment system. The air vents are slim and “high tech”, the center console is higher, and there’s mood lighting with 64 color options. 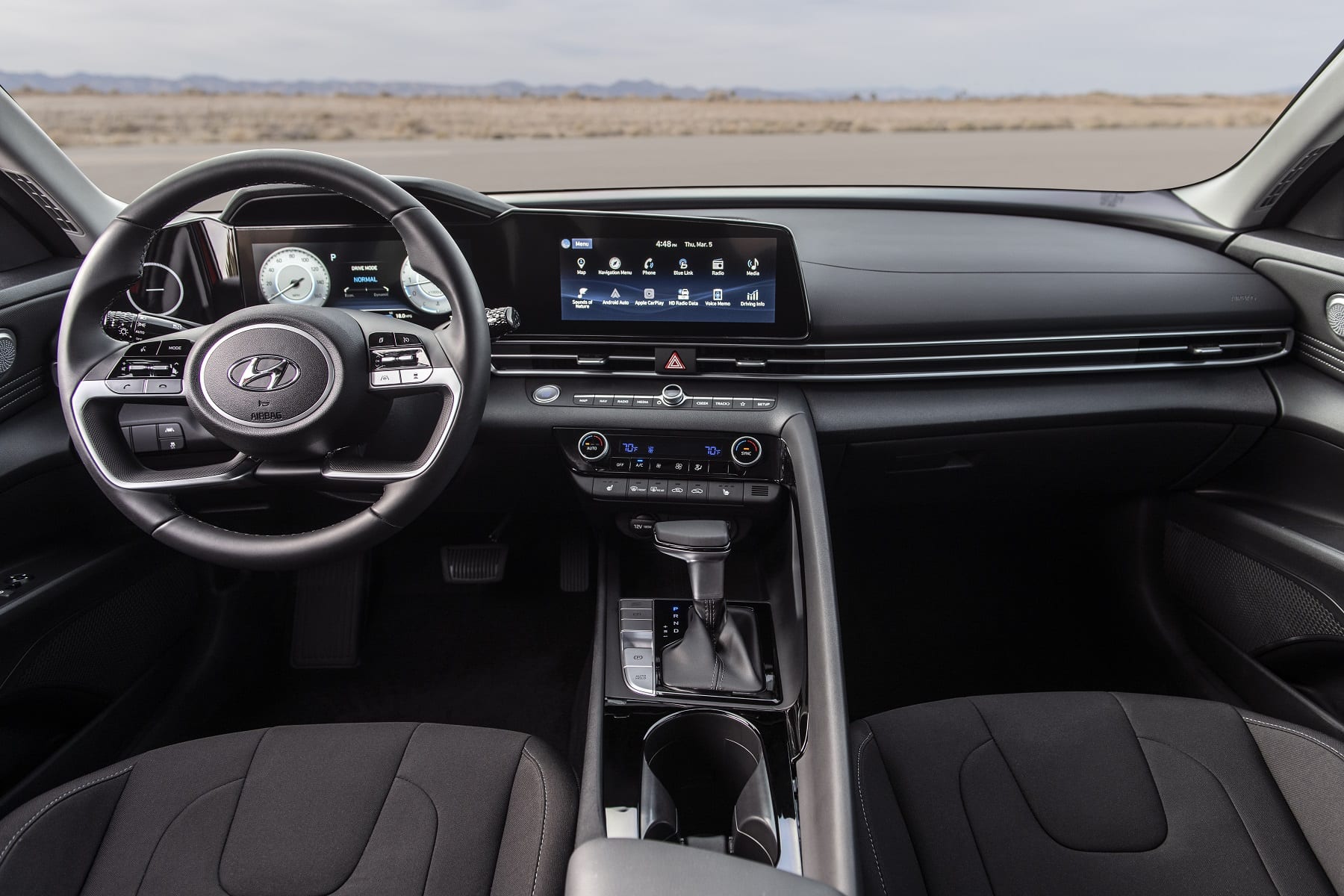 Moving on to the powertrain, the Elantra will ship with a standard gas and a hybrid option. The gas option is a 2.0-liter MPI Atkinson Cycle four-cylinder with 147 horsepower and 132 lb.-ft. of torque. It’s paired with an “Intelligent Variable Transmission”, which is like a continuously variable transmission but it finished a semester of college and now thinks it’s better than everyone else. That’s because it ditches the push belt design and goes with a chain-belt design which improves efficiency. It also aims to improve linearity with driver inputs and will even replicate transmission step shifts. They’re projected to receive a best-in-class EPA combined fuel economy rating but we don’t know what that is yet.

Meanwhile the hybrid uses a 1.6-liter GDI Atkinson Cycle four-cylinder paired with a 32 kW permanent-magnetic electric motor with a lithium-ion-polymer battery with 1.32 kWh of capacity under the rear seats. Total output here is 139 horsepower and 195 lb.-ft. of torque and it’s paired with a six-speed dual clutch automatic. There is an all-electric driving mode available for lower speeds and it will work in conjunction with the gas motor to provide a power boost at higher speeds as well. Hyundai is targeting at least 50 mpg combined.

The Elantra’s streak as being the best-selling Hyundai should continue for quite a while with this new model. We will get pricing info closer to the car’s launch date. Production is scheduled to begin in South Korea and Alabama this fall with deliveries in Q4. 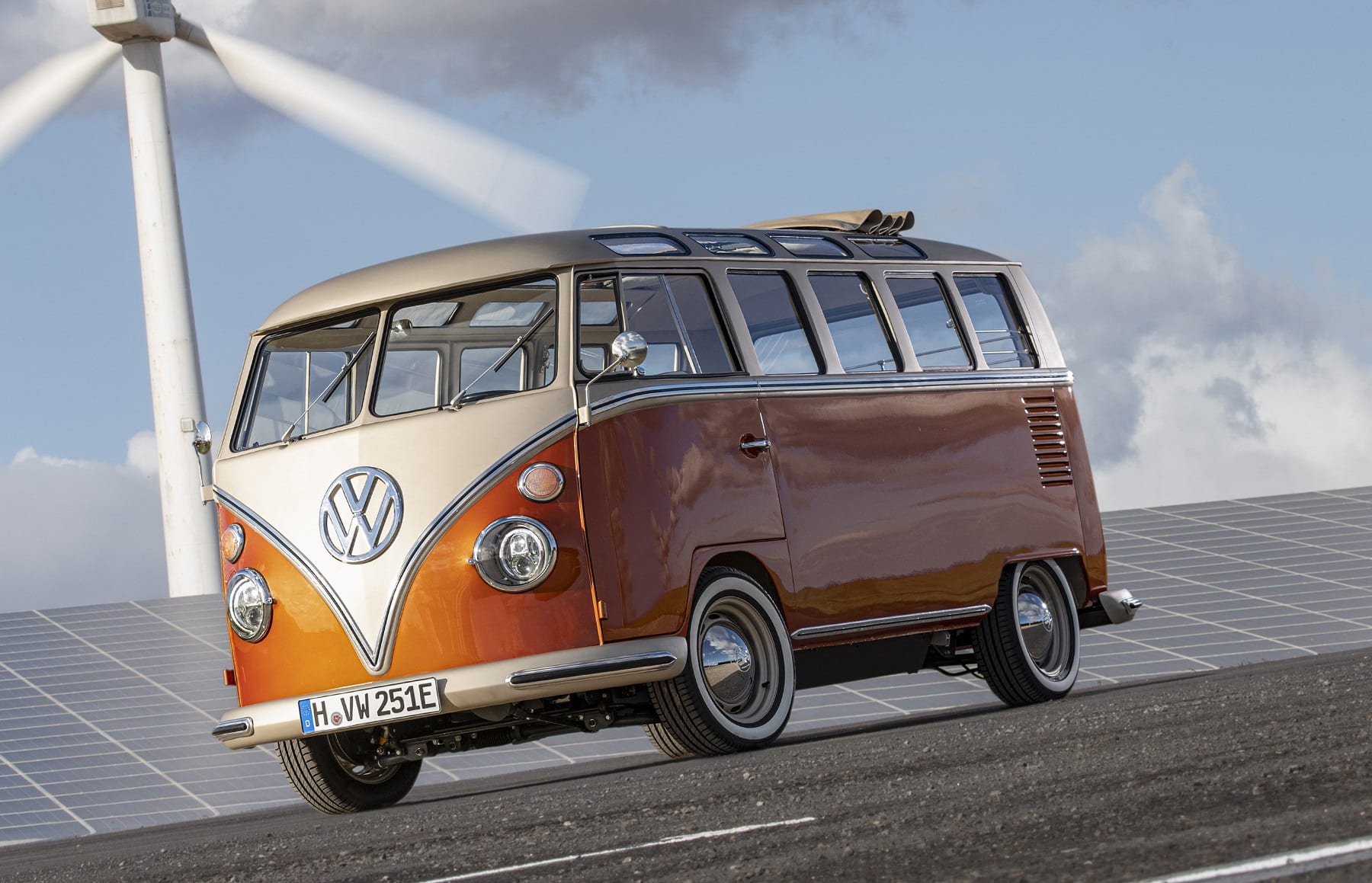 If you can’t wait for Volkswagen’s ID sub-brand to release their expected Microbus revival, eClassics has you covered. The German EV conversion company is offering an EV conversion for the original T1 Microbus for €64,900 or $69,443. That kit is more than just a battery and a new motor though…

eClassics starts first with some chassis upgrades to handle the weight of the new electronics. There’s a new multi-link suspension front and rear complete with adjustable shocks and coil-overs as well as regenerative braking and modern steering. Then they move on to the battery, which is a 45 kWh lithium ion unit that is integrated cleanly into the floor as if it was a modern car designed from the ground up as an EV. It supports fast charging and a driving range of about 124 miles. 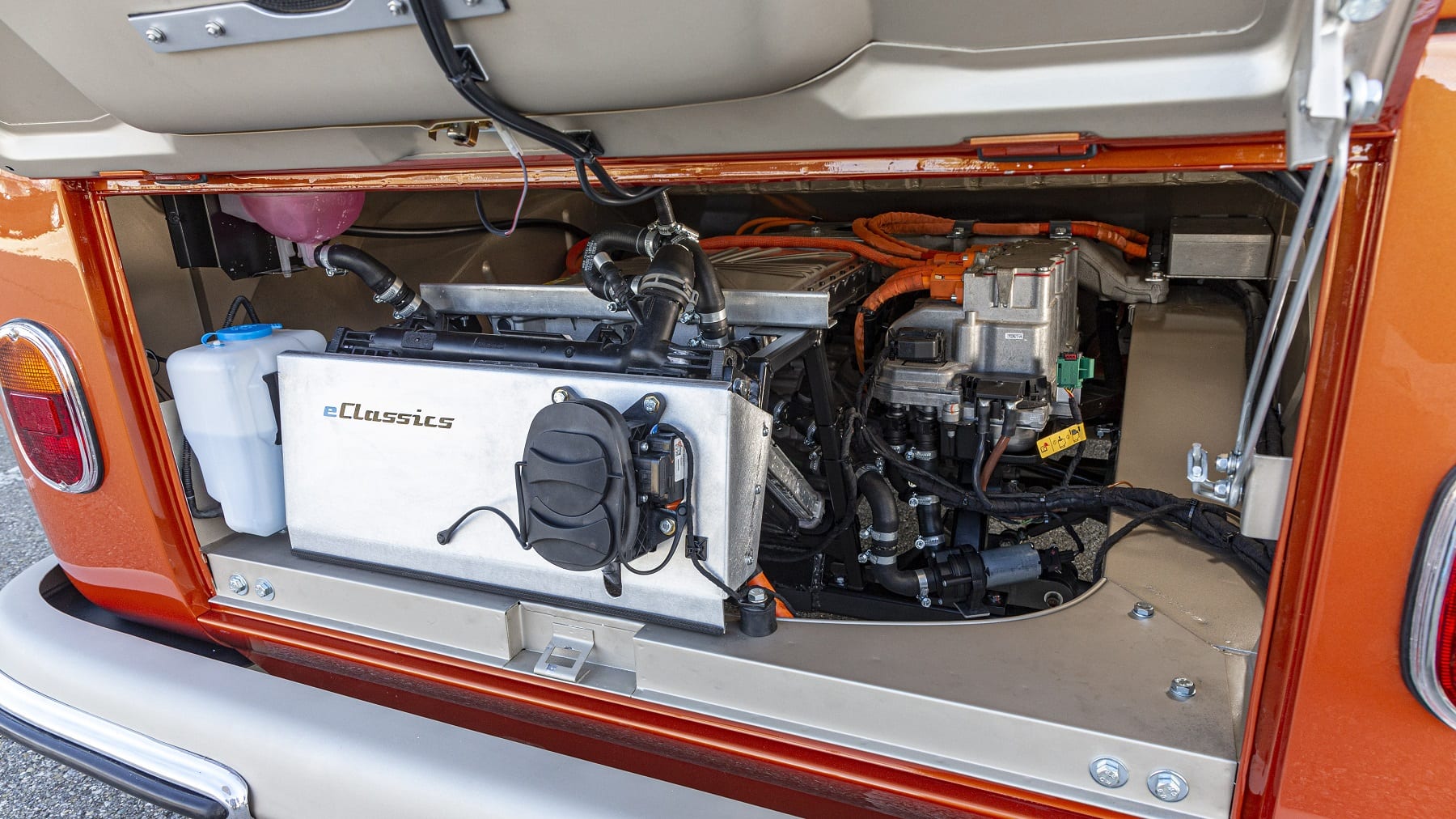 An electric motor is then placed in the original engine location (at the rear) and paired with a single-speed transmission. It remains rear-wheel drive but has quite a bit more power to play with as the new motor is good for 89 horsepower and 156 lb.-ft. of torque. As MotorAuthority points out, that’s a massive jump compared to the original 43 horsepower and 75 lb.-ft. of torque. Perhaps for legal reasons but mainly because it’s just a good idea, speed has been limited to 80 mph. Even that sounds terrifying though. 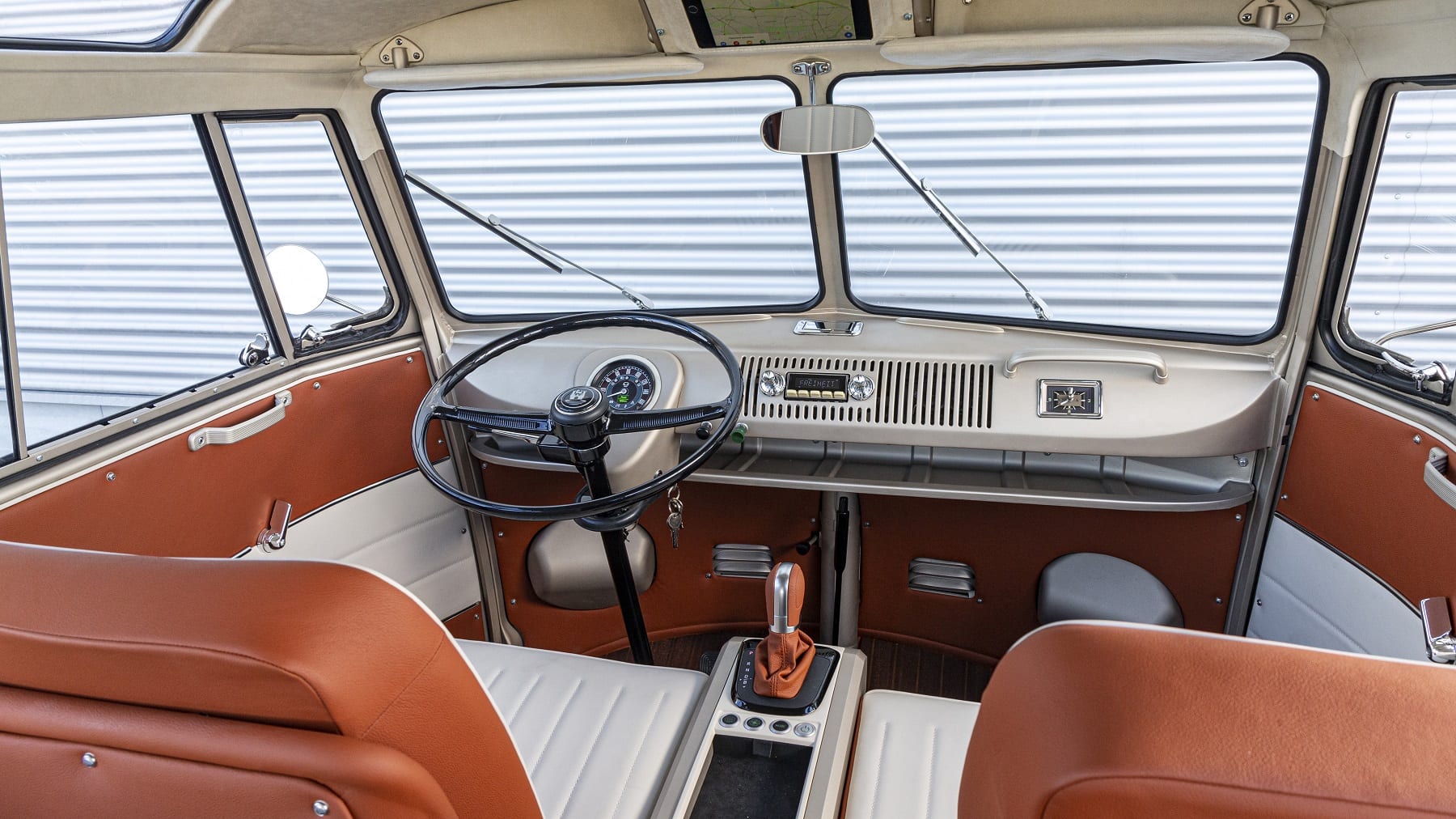 Now because eClassics is involved, this conversion is done right. It’s been built with genuine VW parts whenever possible and drivers can even control the amount of brake-energy regeneration. This is one classic EV conversion that actually makes quite a bit of sense.

More shit cancelled by the coronavirus

How automakers are stepping up

A few automakers have expressed interest in shifting their production capabilities from cars to other much-needed supplies, namely respirators. As this pandemic continues to spread, there’s fear over a shortage of respirators becoming a major issue, if it hasn’t become one already. In the UK, the Prime Minister’s office has contacted Jaguar Land Rover, PSA, Ford, Honda, and Rolls-Royce. They’re far from the only ones offering assistance too. Autoblog has a good rundown on how automakers and others are stepping up to help with the growing shortage of a vital piece of medical equipment that’s desperately needed for Covid-19 treatment. And meanwhile, Ferrari took a break from suing owners for putting a sticker on their car to donate 10 million euros in support of the Covid-19 crisis that’s been hitting especially hard in Italy. The donation comes from the Agnelli family, the ones behind Ferrari.

Here in the US, GM and Ford are leading the effort to possibly render assistance. According to The Detroit News, they’re actively studying the feasibility of producing respirators and other vital medical equipment. It would be like the Arsenal of Democracy from World War II all over again. But no firm commitments have been made yet as they study whether it’s even possible to retool their factory quickly enough and whether bringing in all their workers again will only make the situation worse. In any event, it’s heartwarming to see so many in the industry willing to help.