Welcome to the Hooniverse News! As always, this is a weekly recap of the biggest stories in the automotive industry without the fluff or bull. This week: it’s all about the new Ford F-150. Seriously, that’s by far the biggest thing to have happened this week. Come take a deep dive and learn all there is to know about it. 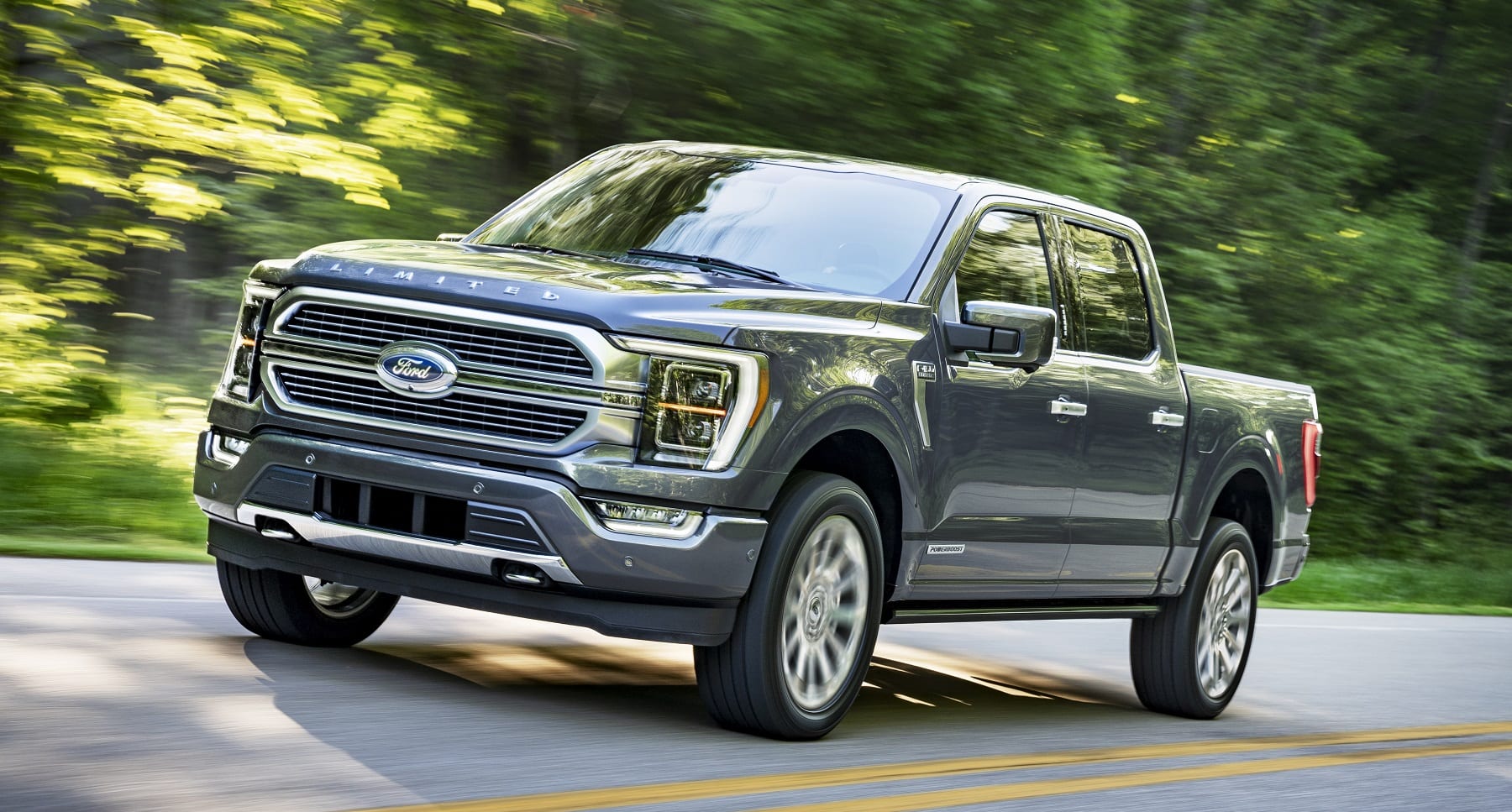 After lots of teasers and promises, Ford pulled the curtains back on a brand new F-150 last night. The F-150, which you may have heard of before, has been a bit of a cult classic. You may have been one of the lucky few to have even seen one in person around your town. Only about 2,400 of them were sold last year… per day. Given its moderate success as being the best-selling vehicle in America for nearly 40 years straight, Ford has thrown everything they got at the newest version. The F-150 has been a major part of Ford’s identity and their success and it’s more important now than ever to get it right. We don’t know everything about the new F-150 yet but it’s already enough to know they’ve probably gotten it right.

Last night’s reveal was more about showing off than posting hard data. We got to see a lot of the key features and innovations as well as one of the planned powertrains. We’ll learn more the closer we get to its fall launch date, but here’s what we have so far. 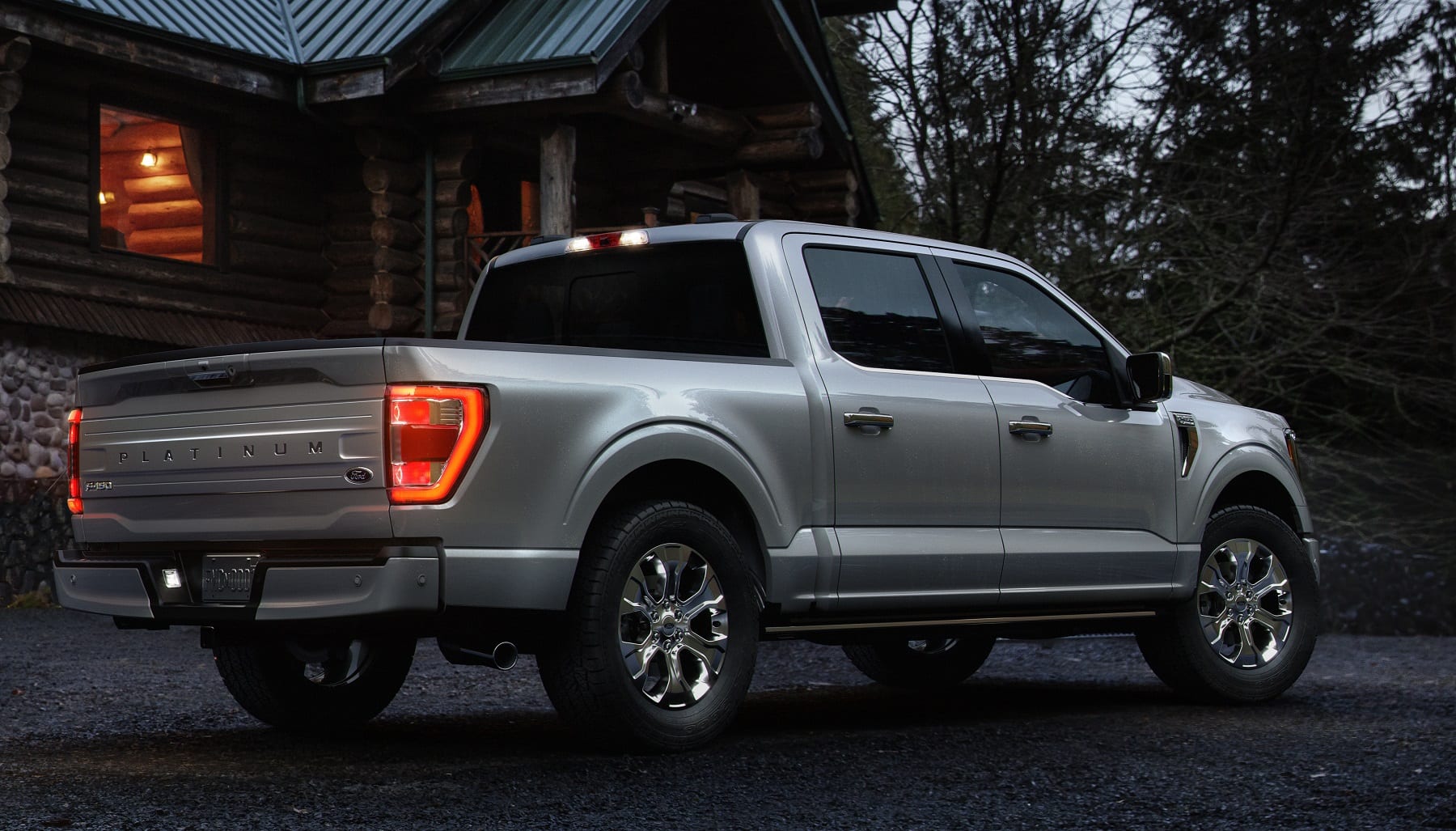 After realizing their switch to an aluminum-alloy body wasn’t the doomsday event some forum guys and GM’s marketing team had predicted, Ford is doing it once again. The body is still immediately recognizable as an F-150 but makes strides in improving aerodynamic efficiency while boasting a more modern style. The exterior is definitely more of an evolution rather than anything all new, but that’s worked for the F-150 in the past. We see new lighting that can be full LED by request, a new powerdome hood, wraparound bumpers, and eleven new grille options. It also gets higher front fenders, a tucked-in midsection, and a new stance that sees larger-diameter tires that are pulled out 3/4 of an inch. Aerodynamics have been improved with new active grille shutters, an automatically deploying air dam, and new cab and tailgate geometry. 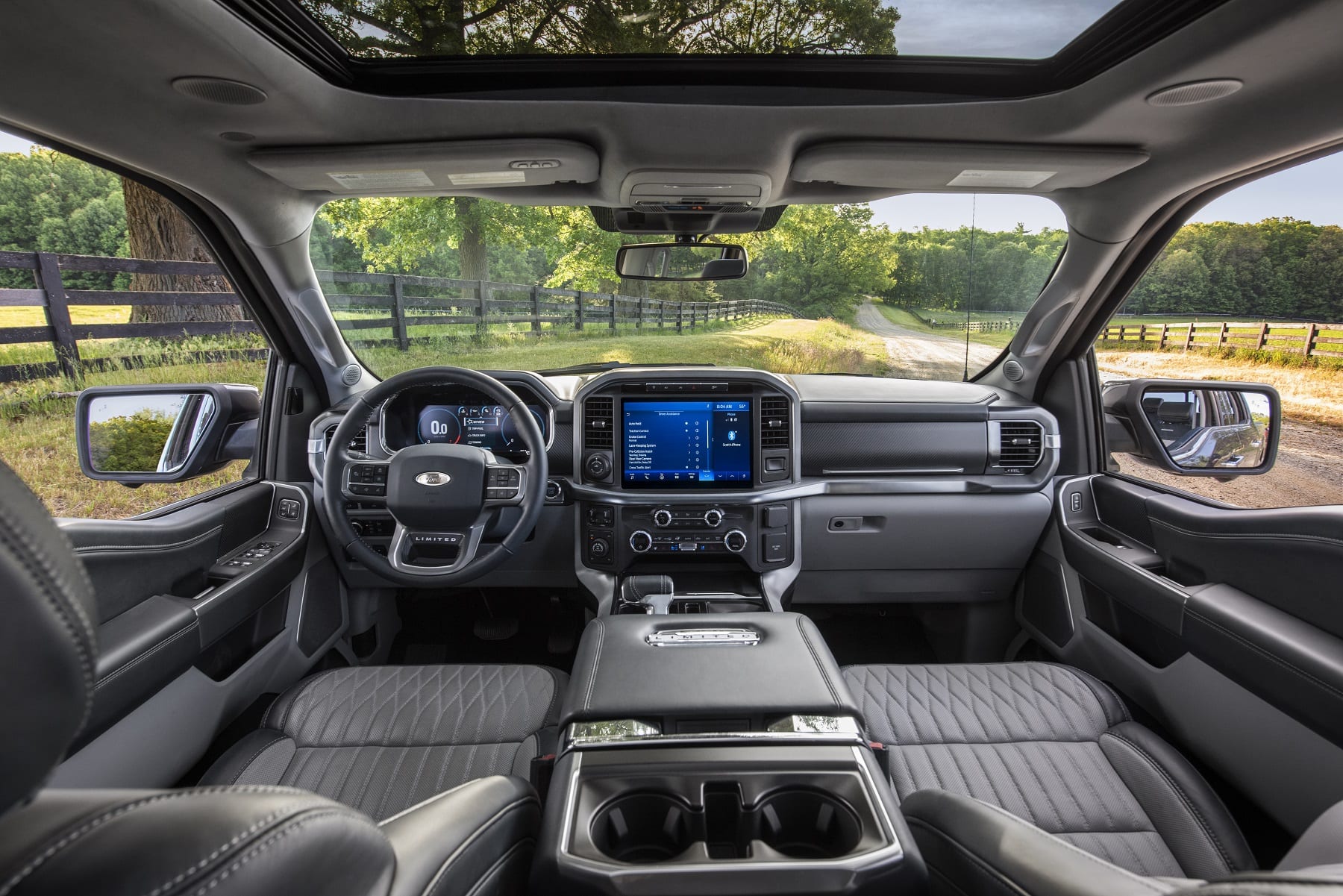 The changes inside are probably some of the most dramatic though. It’s a tougher cabin for the worker-spec trucks that actually get used as trucks and can be a more luxurious cabin for the increasing number of Americans who are replacing luxury cars with luxury trucks.

Base cabins will feature more soil-resistant two-tone seats, a new dual glovebox, and an 8-inch touch screen infotainment screen. That means you’ll be able to actually see the backup camera now. The mid-level trims will get a massive 12″ display as an option and higher trims get that as standard. Moving up to the highest trims you get the best leather Ford has and available Max Recline Seats. Those seats fold flat to nearly 180 degrees with the bottom cushion rising to meet the back cushion and the upper back support rotating forward for maximum support and comfort. This allows owners to sleep more comfortably on the road at rest areas or on the job site while the guys you’re supervising do all the work. 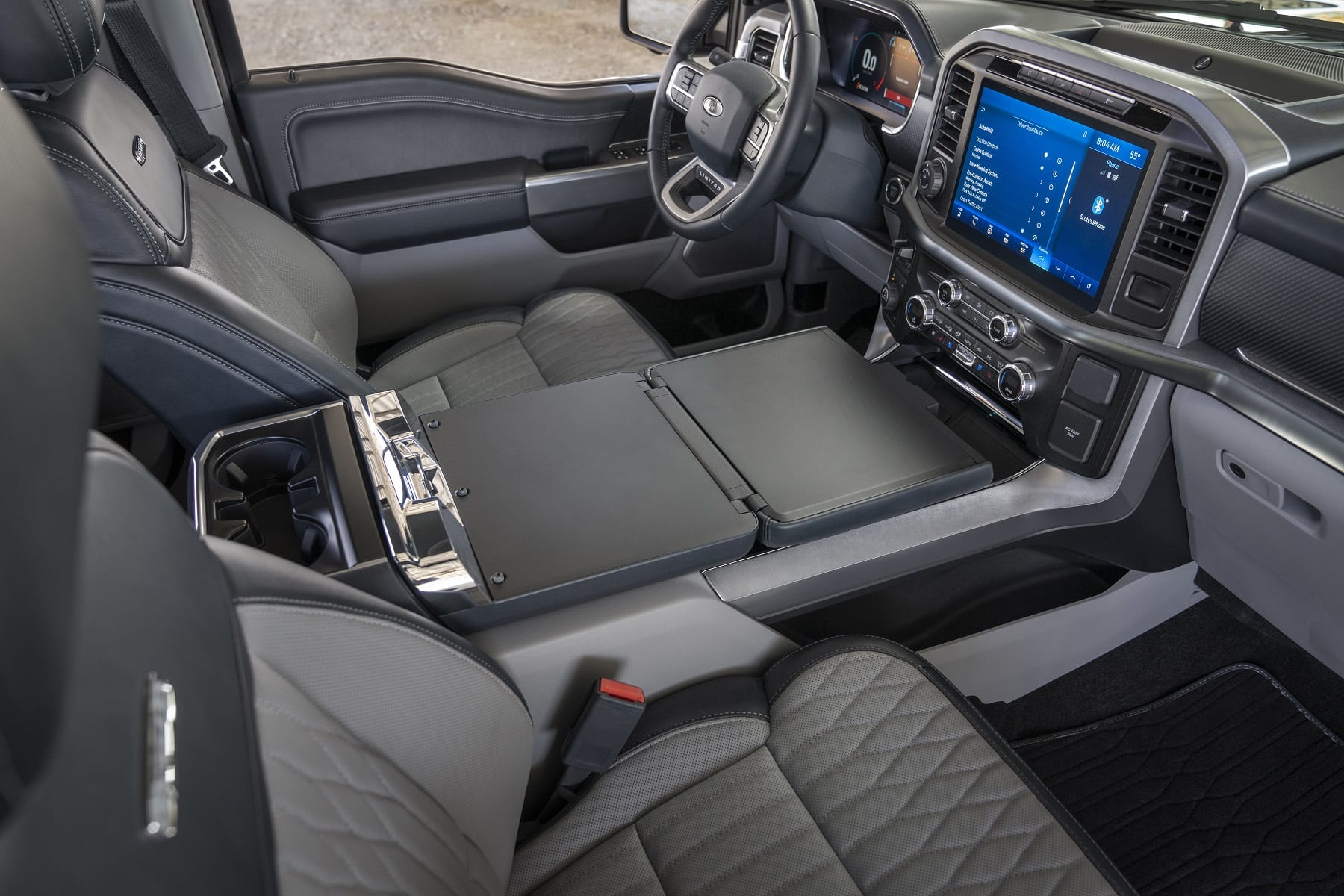 Several productivity-boosting features are also available inside and out, including the Interior Work Surface option which is exactly what it sounds like. This adds a stowable surface that spreads over the center console (or center seat on bench-seating configurations) that is ideal for signing documents, using a laptop, or just eating lunch. Trucks equipped with a console shifter will have a feature that allows it to stow away to clear room for the work surface. It’s available on all trim levels. Ford also offers a lockable, fold-flat rear storage vault which extends the width of the rear seats. It’s accessible by lifting the rear seat cushion and is ideal for storing items long term that you don’t want out in the elements. 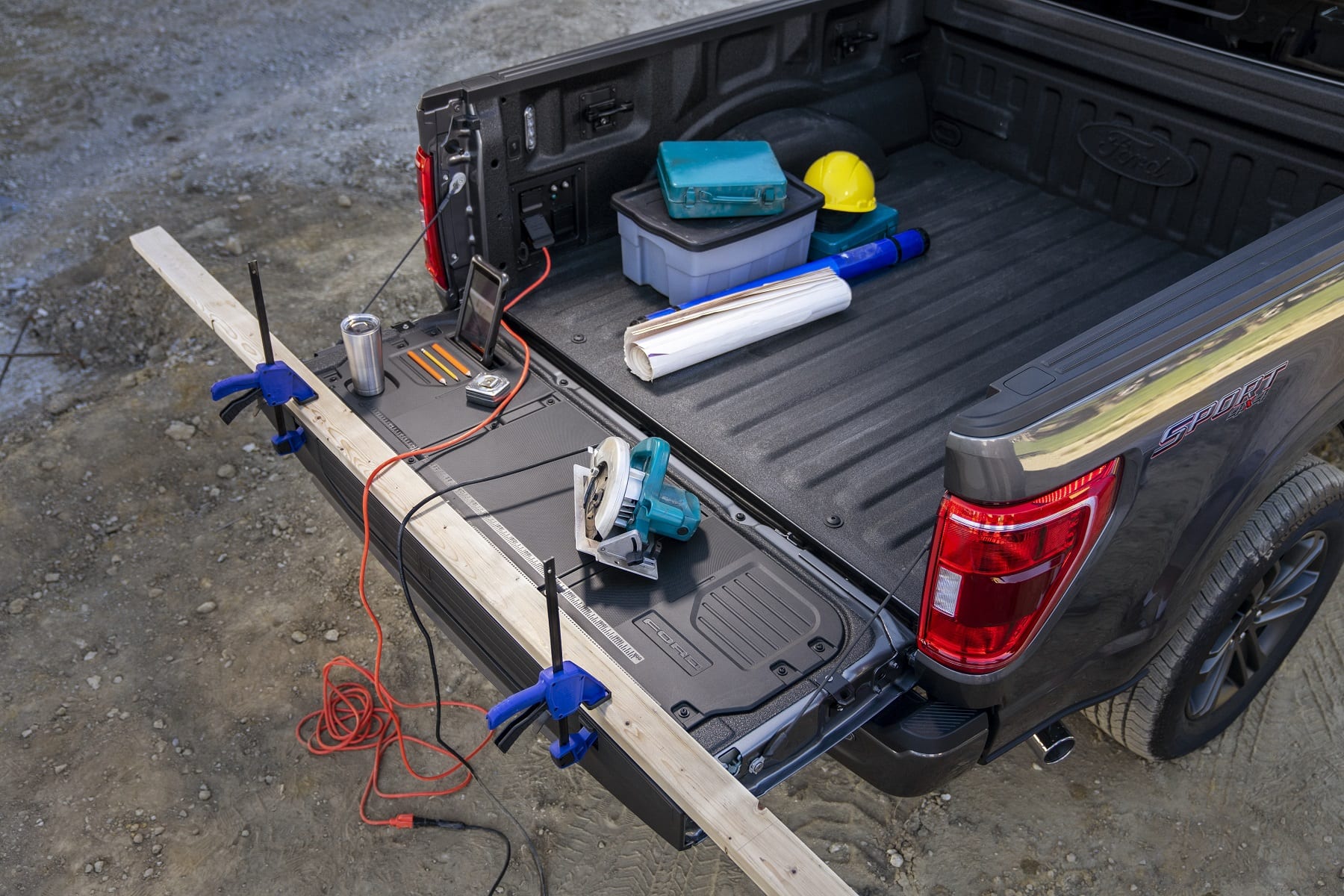 There’s also some neat features at the back of the truck, including a Tailgate Work Surface with integrated rulers, a mobile device holder, and a pencil holder. That would come in handy if you also opt for the Pro Power Onboard feature which acts like a power generator that you can take everywhere, be it a job site or a camp ground. It has a 2.0 kW output as standard and 7.2 kW on PowerBoost-equipped models (more on that to come). The onboard generator can also be used while on the move to charge tools between jobs. Power is accessible through in-cabin outlets and up to four cargo bed-mounted 120-volt 20-amp outlets plus an additional 240-volt 30-amp outlet on the 7.2-kW version.

The newest version of Sync 4 is included with some new features of its own. Full Apple CarPlay and Android Auto support of course and new Sync integrations with apps like Waze and Alexa run on a system with twice the power of Sync 3. XLT and above models feature a standard eight-speaker sound system by Bang & Olufsen while an eighteen speaker unit is optional (and standard on higher trims). Sync 4 also offers new features through the FordPass mobile app like remote unlocking and engine start, zone lighting control, trailer theft alert, trailer light check, and control of the onboard power generator. 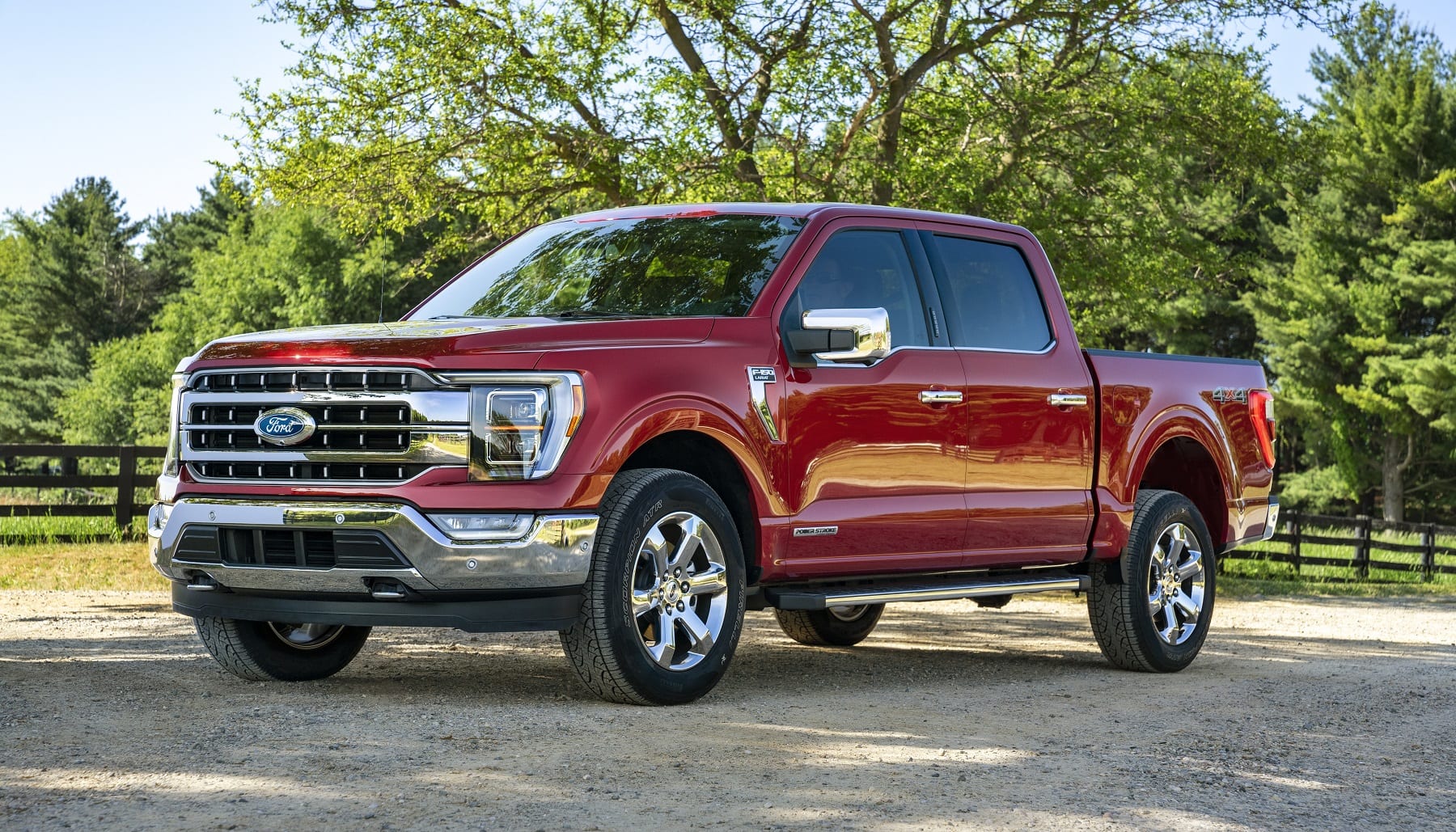 The only powertrain Ford is talking about at the moment is the EcoBoost V6 and its optional hybrid system called PowerBoost. It’s been casually mentioned in a tech sheet that all existing engine options are returning, including the 3.0-liter Power Stroke diesel V6 and the Coyote-based 5.0-liter V8 that’s capable of accepting a supercharger. All are paired with a standard ten-speed transmission. But there’s a pretty big push for improving efficiency that’s just started recently so the first-ever hybrid F-150 is the bigger news.

That new EcoBoost is a 3.5-liter twin-turbocharged V6. No power figures are available yet but I suspect it will give the V8 a run for its money. Then there’s the optional PowerBoost hybrid system which adds a 35 kW electric motor integrated into the transmission. The motor is fed off a 1.5 kWh lithium-ion battery which is recharged through regenerative braking energy. There’s no shortage of space to place a battery pack on this truck so cabin and bed space are not impacted at all by this hybrid system. 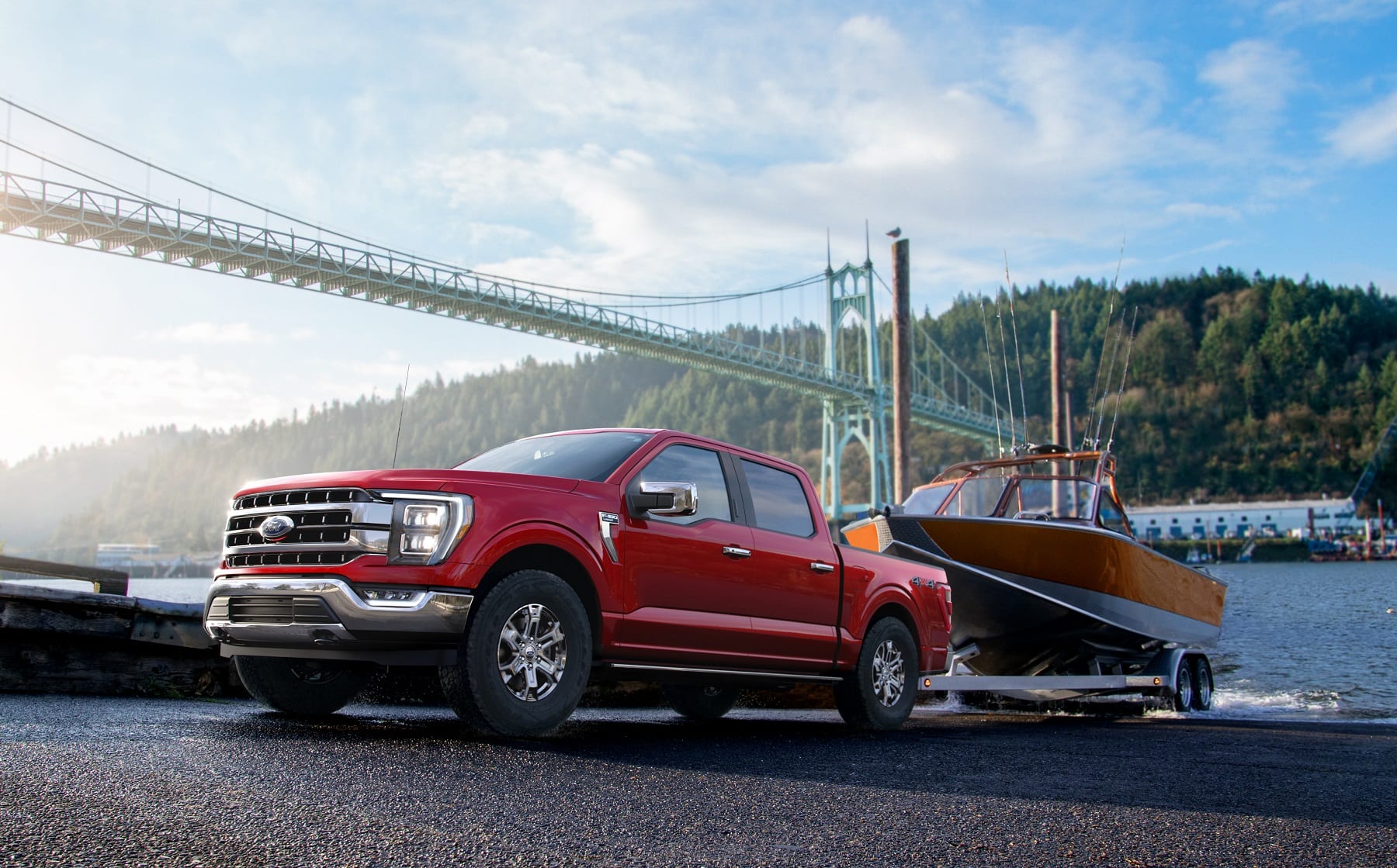 PowerBoost makes a noticeable impact by contributing 47 horsepower as well as instant additional torque while on its way to towing 12,000 pounds, but also helps ease the load off the V6 a bit. Official EPA figures are still pending, but Ford is anticipating a massive 700-mile range on a full tank of fuel with this spec. Fuel capacity on this particular model is 30.6 gallons, so the math tells me to expect about 23 mpg. Official towing and payload capacity figures are still TBD so there’s no indication on how much of an impact PowerBoost makes in that regard.

That about sums it up for the all-new F-150. It’s without a doubt the most important vehicle in Ford’s arsenal and makes a huge impact in our daily lives whether we know it or not. For Ford in particular, the pandemic has hit their bottom line extremely hard as it has for everyone, but the F-150 could prove to be a constant in an ever changing world. I’m sure Ford is as eager to start building this new truck as they were to get production lines moving again. We’ll start seeing them fly off dealership lots faster than they can build them this fall. More information like pricing and power outputs should be available fairly soon.

Other news coverage from the week 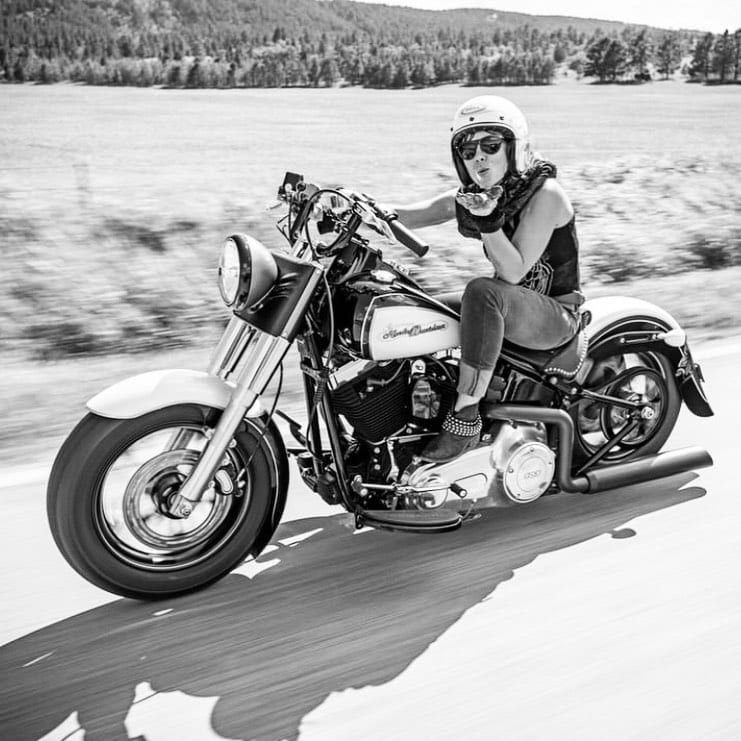 The F-150 reveal may have been by far the biggest news of the week but that isn’t all there was. RAM teased the TRX, the long-awaited Hellcat-powered pickup, Volkswagen showed off a breathtaking Arteon Shooting Brake that isn’t coming to America, and Jessi Combs has finally become the fastest woman on earth. I’m not crying, you’re cying.