Welcome to the Hooniverse News! As always, this is a weekly recap of the biggest stories in the automotive industry without the fluff or bull. This week, Audi decides they want to compete with the X4 and make the Q3 less practical, a race team recreates the Jaguar XJ13 to 1969 Le Mans specifications with stunning results, Sunlight Sonata – Hyundai’s new hybrid that charges in the sun, Jaguar breaks their own Nürburgring record with the XE SV Project 8, and BMW M boss confirms manuals for future M3/M4 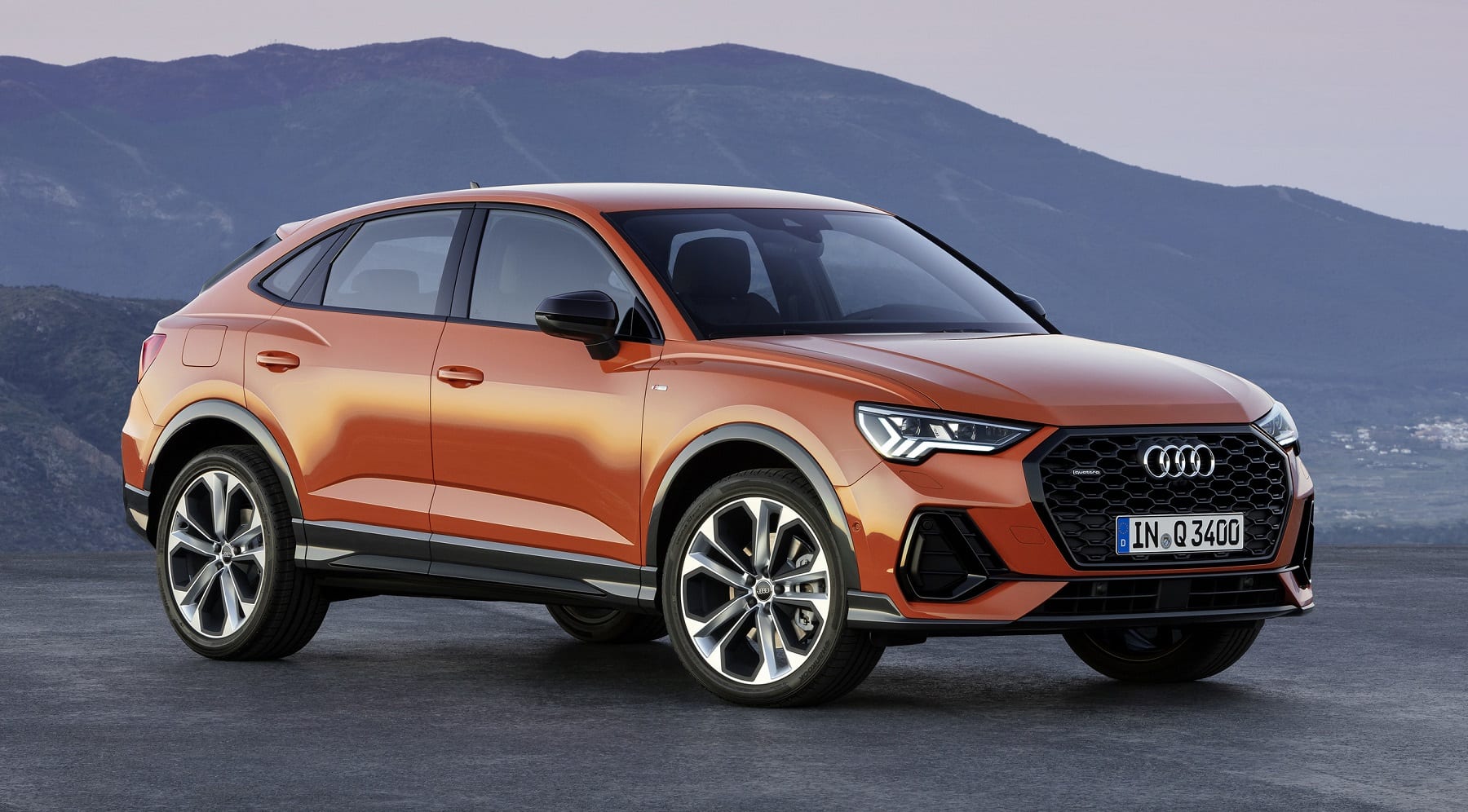 I may as well get the dumbest car of the week out of the way first. Audi has decided to go after that lucrative BMW X4 market share with a new model for the successful Q3 range. It’s the Audi Q3 Sportback. It’s just like every other Q3, but with a sloped roofline to reduce headroom, rear visibility, and trunk space. But it gives them the excuse to call it a “compact SUV coupe” (it isn’t) with an “expressive design and highly dynamic handling”, which certainly sounds nice.

That “expressive” design starts with a black octagonal “Singleframe” grille and trapezoidal air inlets up front, flanked by sharp Matrix LED headlights. The orange paint helps make it look like the kind of face you’d carve into a pumpkin. The big changes at the rear are a low roofline with flat D-pillars and a roof edge spoiler. See, that alone is enough to make this a coupe. Doesn’t matter if it’s a 3,900-pound SUV, just chop the roofline a bit and it’s practically a sports car. Enthusiasts can’t complain about the death of the sports car if you simply change the definition of a sports car, can they. 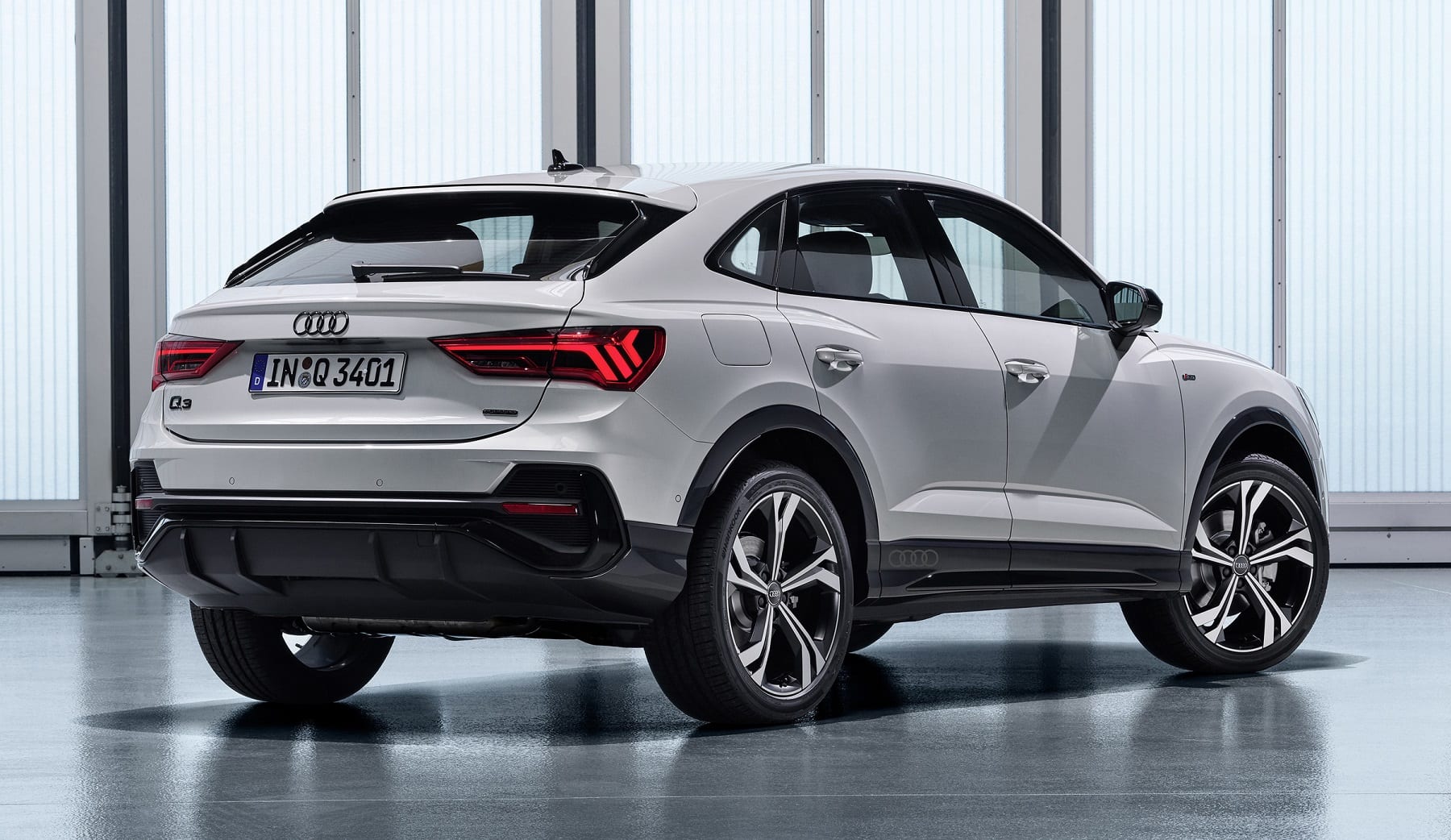 Providing “highly dynamic handling” is sport suspension and an available electronic damper control system which can adapt to conditions on and off road. But that’s silly, you can’t take sports cars off road. Anyway, power options for Europe are a 2.0-liter turbocharged four-cylinder gas engine with 230 horsepower or a diesel engine of the same size with 150 horsepower. Audi claims that other engines will be available sometime after its market launch in Europe, including other gas and diesel options with a 48 V mild-hybrid system. Assume that none of the diesels will be sold here in America. 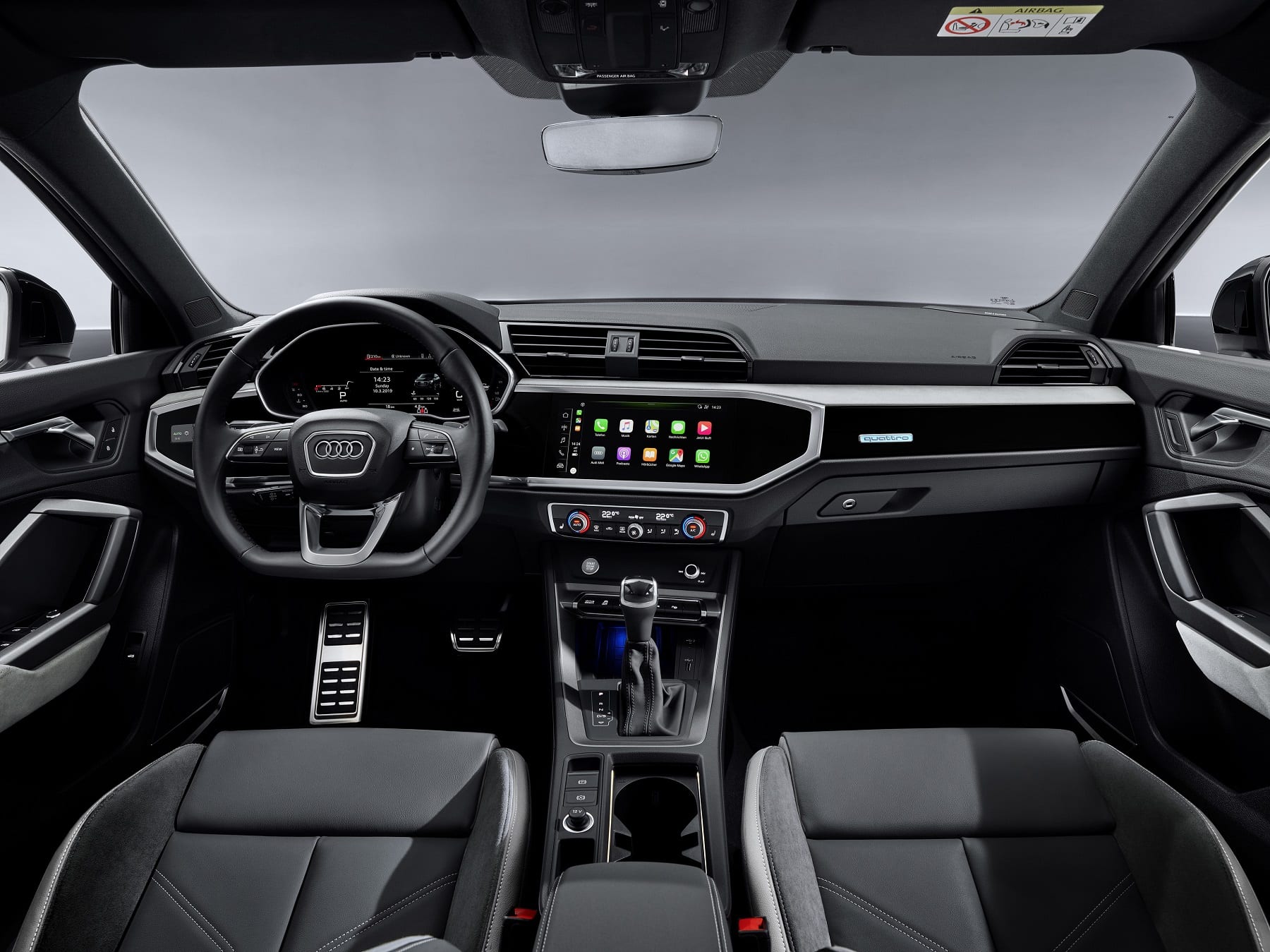 One thing of interest (perhaps the only thing) is that it will also be available with a manual transmission – probably in Europe only. 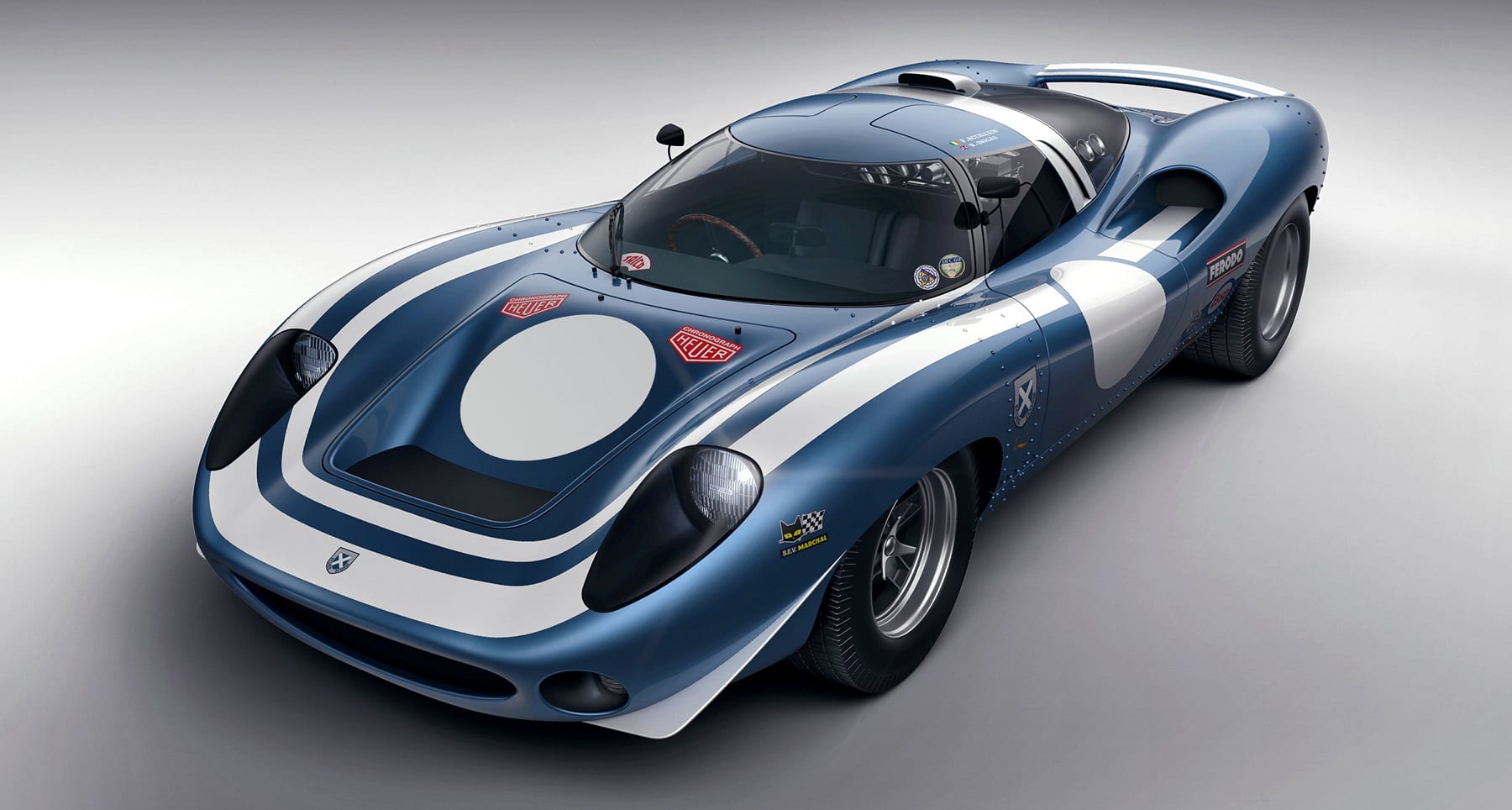 Alright I feel kinda bad having forced you to read about that Audi first. Let me make it up to you.

Jaguar once attempted a Le Mans comeback in 1966 with a breathtaking prototype called the XJ13. They had won the 24 Hours of Le Mans twice a decade or so prior with the D-Types, but had not seen any success since their last win in 1957. Hoping to once again be a major player in the top sports car racing category, work began on a car that could be ready for competition in 1966. The XJ13 was to be a mid-engine roadster with a glorious 5.0-liter V12 in a sleek and gorgeous body. Sadly, by the time development was finished in 1966, testing proved that the car was uncompetitive against the likes of the Ford GT40 and other cars built within current regulations. With only one prototype being built, the project was shelved and the car was moved into storage. 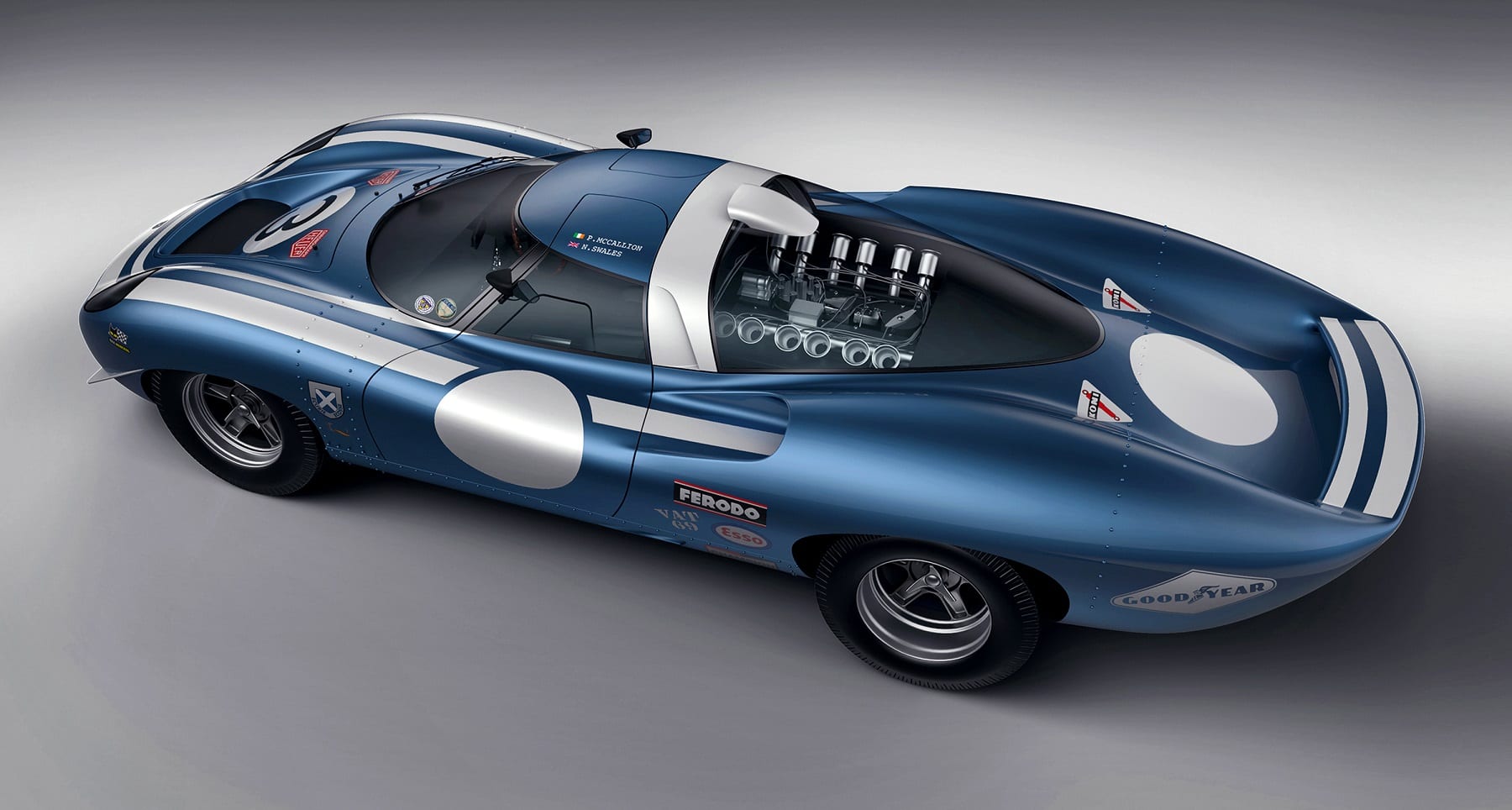 Over 50 years later, Ecurie Ecosse, a Scottish race team with some history racing Jaguars, asked the question: “What if the XJ13 had been developed and raced? What if this car’s immense potential had been realised?” What if instead of shutting down the program, the Ecurie Ecosse team of the day chose to pick it back up and make something out of it in time for, say, the 1969 24 Hours of Le Mans?

The answer, theoretically, could have been this. The Ecurie Ecosse LM69, a racing prototype based on the XJ13 that remains true in spirit but built to strictly meet 1969 regulations “as the XJ13 would have done had it been prepared for serious competition use”. The car benefits from lighter composite materials made available during the time, experimental (for the era) aerodynamic devices, wider wheels and tires, and a more powerful engine. They have not gone into engine details but did confirm it will feature a quad-cam V12, which should be simply fantastic. 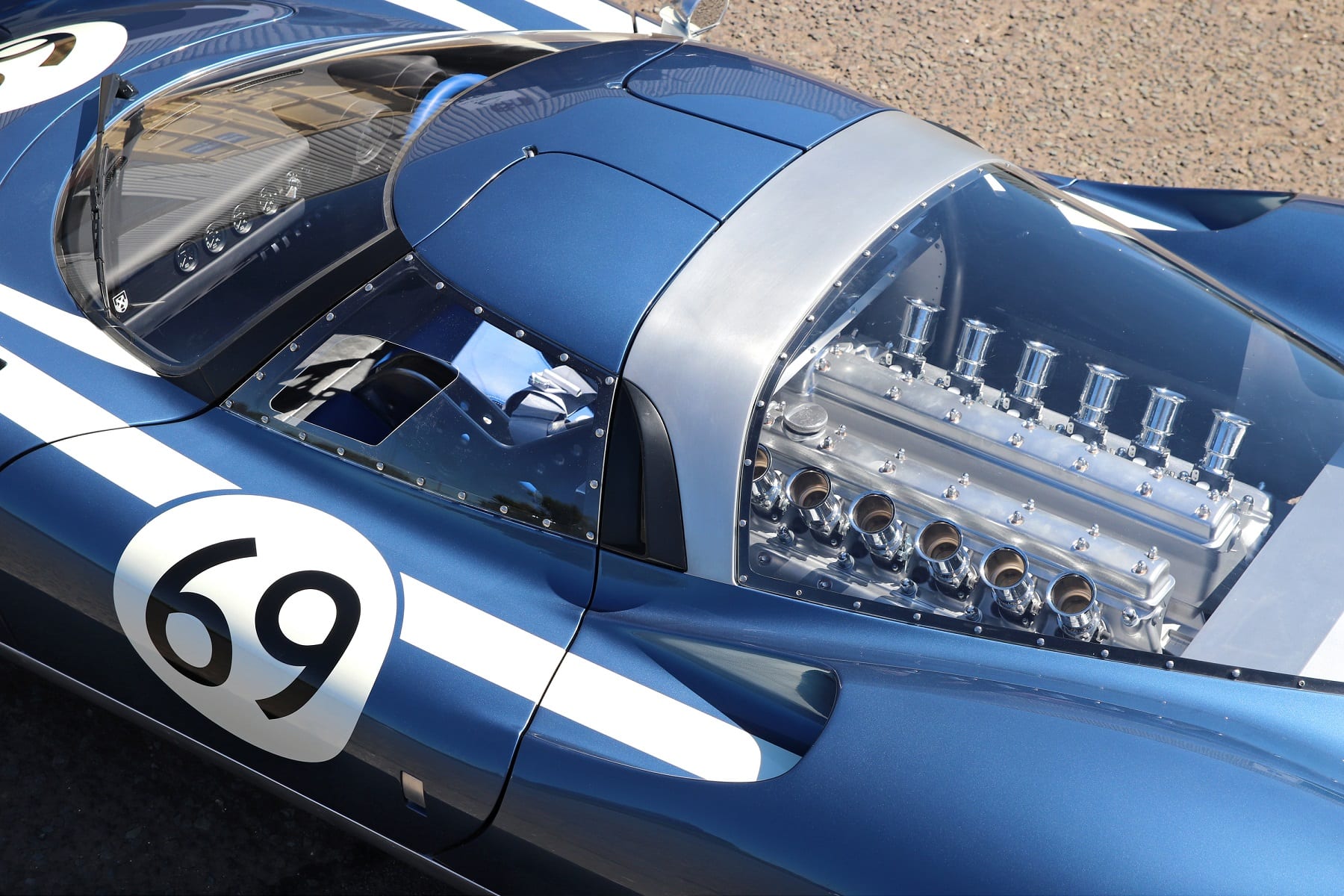 It’s real, though perhaps still a work in progress…

Now this isn’t just a one-off show car either. The racing outfit plans to produce 25 of them – no coincidence that their production numbers would have met 1969 FIA homologation requirements. Each car will be hand-built and be an honest recreation of a race car from the era. Designers and engineers could only feature design details and technology that would have been available in 1969. It’s designed for competition but is also road legal… somehow. Pricing hasn’t been announced, but any millionaire car collectors reading this are encouraged to visit www.ecurieecosse.com for more information. Sweet dreams.

Now for something a little more grounded. As Hyundai is preparing to roll out the all-new and rather impressive Sonata to global markets, they’ve revealed the Hybrid model many were surely waiting for. It even packs a surprise or two.

The Sonata Hybrid’s powertrain features an engine called the “Smartstream G2.0 GDi HEV”, which I suppose is code for “really efficient 2-liter four-cylinder engine” or something. That’s paired with a specially-tuned six-speed automatic transmission. The engine alone produces 150 horsepower and 139 lb.-ft. of torque, but factor in the electric motor and that rises to 192 horsepower. The electric motor itself is capable of 151 lb.-ft. of torque, making it plenty powerful for when it’s the only source of momentum.

The first of the cool tricks up its sleeve is the solar panel roof which can directly charge the batteries. Not by a ton, but it helps. With 6 hours of sunshine a day, the car’s travel distance can be extended by around 800 miles annually. That comes out to about 2.2 miles per day for every six hours the car is exposed to the sun. Theoretically that number would rise if it’s left out all day but they did not specify if there was a hard limit or not. 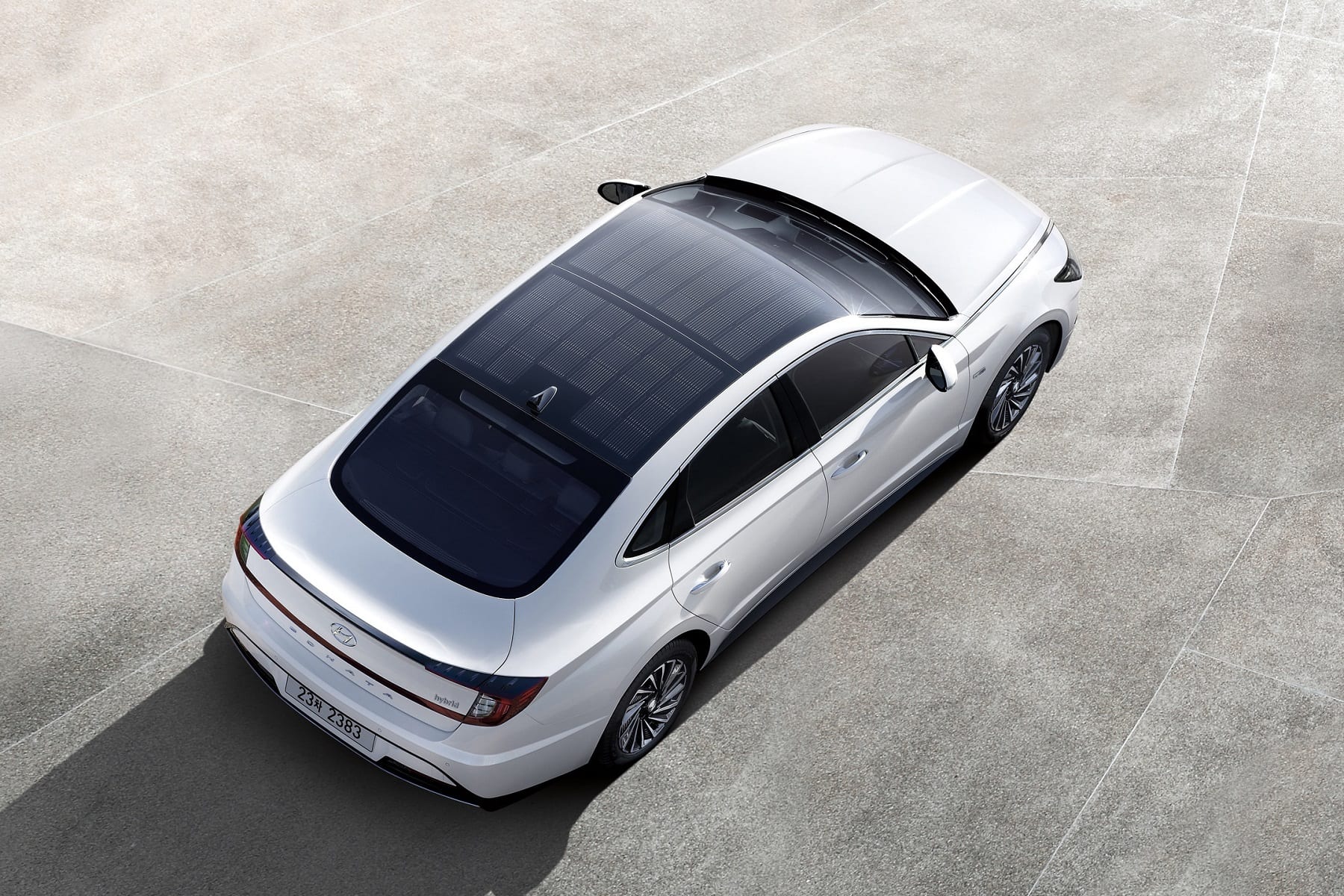 Another bespoke feature for the Hybrid is a world-first “Active Shift Control” system. This applies new logic to the Hybrid Control Unit which then controls the electric motor to align rotational speeds of the engine and transmission. This reduces shifting times by 30% and also prolongs the life of the transmission by minimizing friction during a gear shift.

So far the Sonata Hybrid has only been revealed in Korean-specifications but it should be about the same when it launches elsewhere. Combined fuel economy has been rated at 20.1 km/l or 47 mpg, but note that those are not EPA numbers.

I’m only talking about this so I have an excuse to use it for the lead image. 2 years after Jaguar broke the production sedan lap record at the Nüburgring, they’ve come back and beat it again. The latest track-day spec Jaguar XE SV Project 8, equipped with sticky Michelin Pilot Sport Cup 2 R tires, set a time of 7:18.361, nearly 3 seconds faster than the record they first broke in 2017.

Because north loop onboards never get old, Jaguar also published proof of their latest lap on YouTube. It’s worth checking out for the sound of that 592-horsepower supercharged V8 alone. 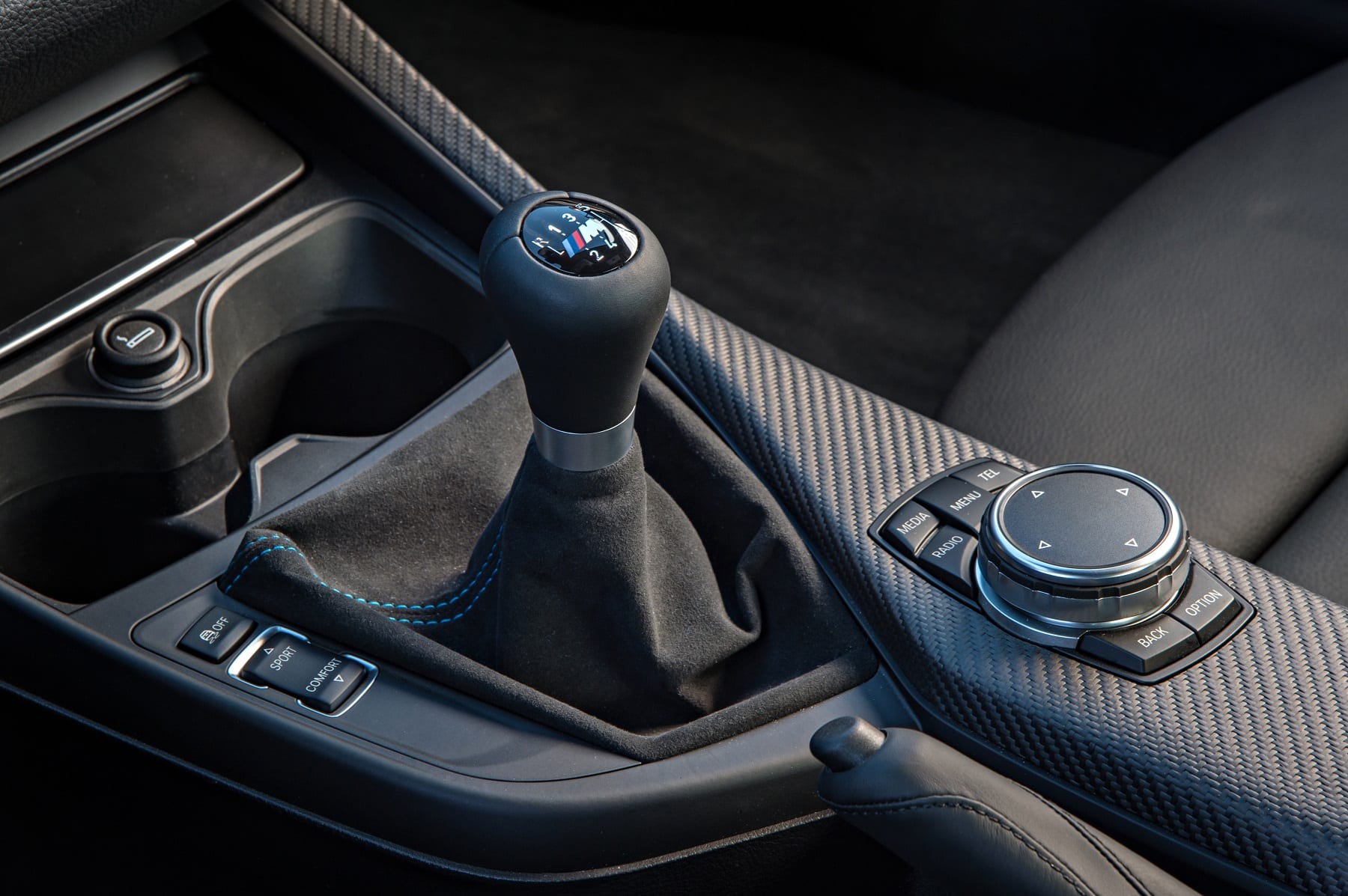 The internet loves to go batshit whenever a sports car drops the manual transmission. It’s certainly something worth cherishing, after all I even bought one myself, but it’s not hard to see why they keep disappearing. The take rate for manuals is almost always too low for automakers to justify, and as cars get more complicated and technical, they don’t always fit the car as well. But despite BMW’s trend of making things more complicated and technical, they aren’t giving up on it just yet.

BMWBLOG received confirmation from the new head of BMW M, Markus Flasch, that the manual option will still be a thing for the next-generation M3 and M4. The G80 and G82, respectively, will also be available with some form of all-wheel-drive system, possibly the same one that debuted in the M5 (which can be switched to RWD). But speaking on the manuals transmission, Flasch explained:

“Manual is very important… The manual stick shift is not a performance-bringer, because an automatic transmission is just faster, you can ask any race driver. But it gives the vehicle character and I kind of compare it to people who love mechanical watches; it isn’t more precise and it doesn’t have any advantage at all but it’s a character feature. So is a stick shift.”

If the new BMW M boss is talking like that, maybe, just maybe M has a bright future.