Welcome to the Hooniverse News! As always, this is a weekly recap of the biggest stories in the automotive industry without the fluff or bull. This week, something happened at Chevrolet you may have heard about it, Lotus unveils breathtaking EV hypercar, Ford and Roush honor a legendary P-51 fighter pilot, and Cadillac prices the CT5. 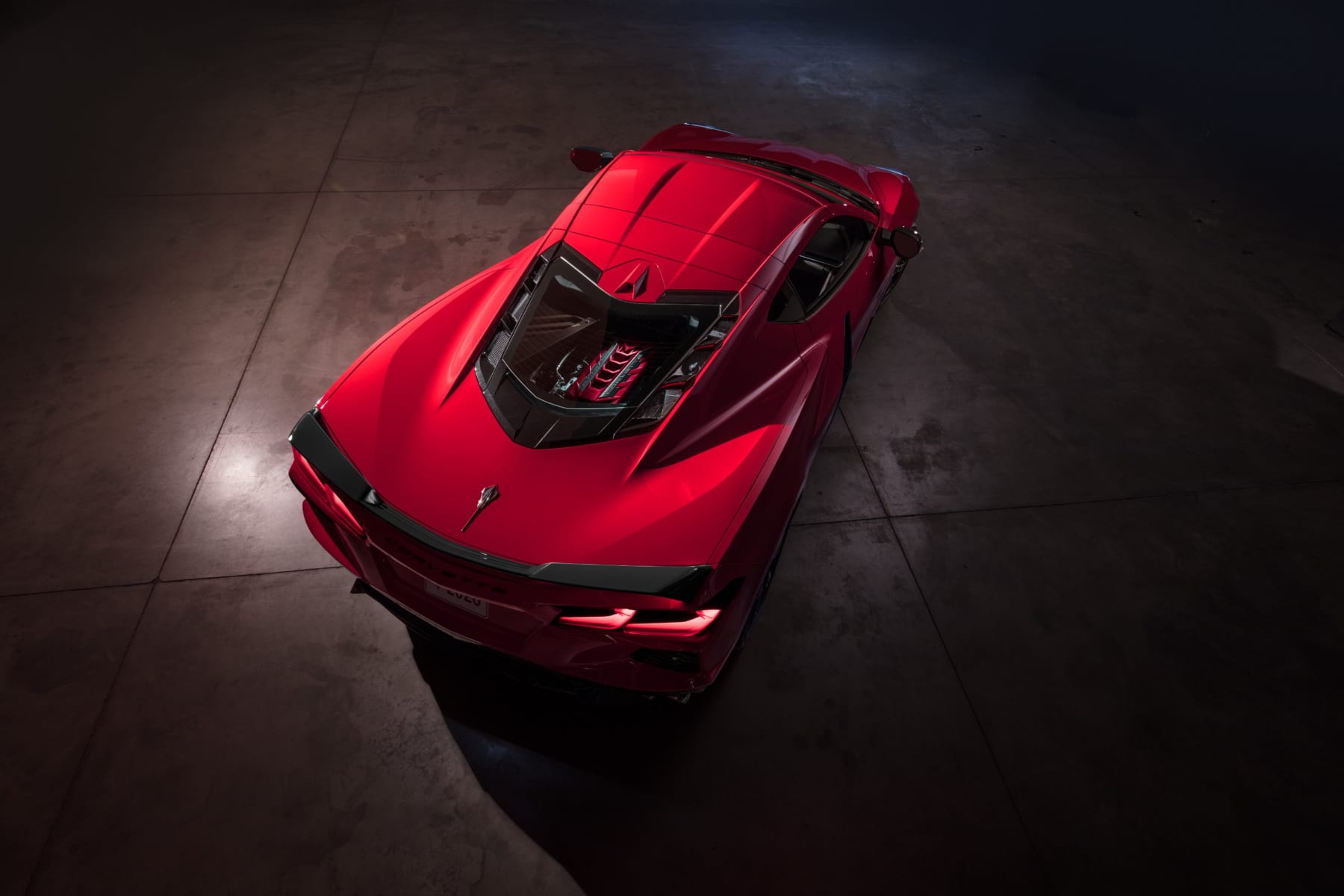 You’ve all probably seen it by now, but Chevrolet revealed a new generation of the Corvette which represents its biggest change yet. It just so happens that Jeff was one of the “influencers” chosen to attend the launch event in person, so he’s much better qualified to talk about it than me. There’s a lot to unpack in his coverage which you should check out here. But the skinny is that it’s mid-engine, really quick, may not be as expensive as you think, and is probably one of the ugliest cars I’ve ever seen. Enjoy!

A very different kind of Lotus was unveiled this week. It’s a couple of different “firsts” that all revolve around its powertrain. It’s the first all-electric Lotus, their first hypercar, Britain’s first fully electric hypercar, and the first all-new Lotus to be launched under Geely ownership. It’s a breathtaking first page of a new chapter in Lotus history. Say hello to the Evija. Pronounced ‘E-vi-ya’, the name is roughly translated to “the first in existence”. Appropriate.

Starting at the best part of the car first, the looks. The Evija’s body is made entirely of carbon fiber and stretched taut as if shrink-wrapped over the car’s mechanical components. A “perfectly proportioned blend of fluid forms and crisp lines” create a truly wonderful shape. A particularly dramatic exterior element is the pair of Venturi tunnels that pierce the rear 3/4s. What’s even cooler are the brake lights that surround the opening at the rear. Meanwhile, another smaller pass-through opening can be seen running from the front splitter area, running behind the front wheels, and exiting at the door. 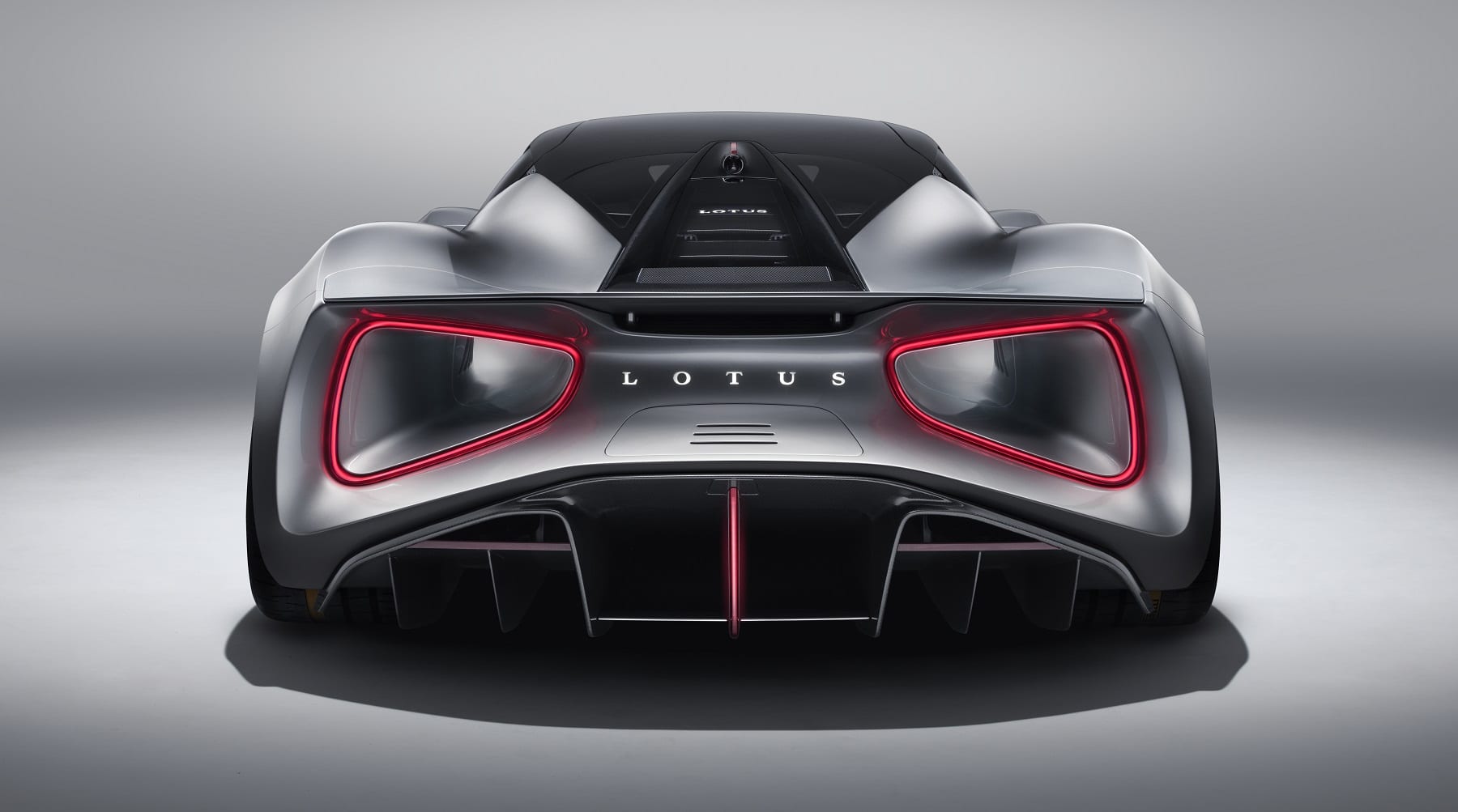 Those tunnels serve the purpose of delivering high-energy air flow to the rear of the car, counteracting the low pressure behind the car and reducing drag. The car also manipulates the air with an active rear spoiler which also features a drag-reduction system. The car also lacks fixed side mirrors – little winglets with side cameras mounted inside are fixed lower in the body and just behind the front wheels. These deploy when the vehicle is unlocked. There’s also a rear camera integrated into the roof. 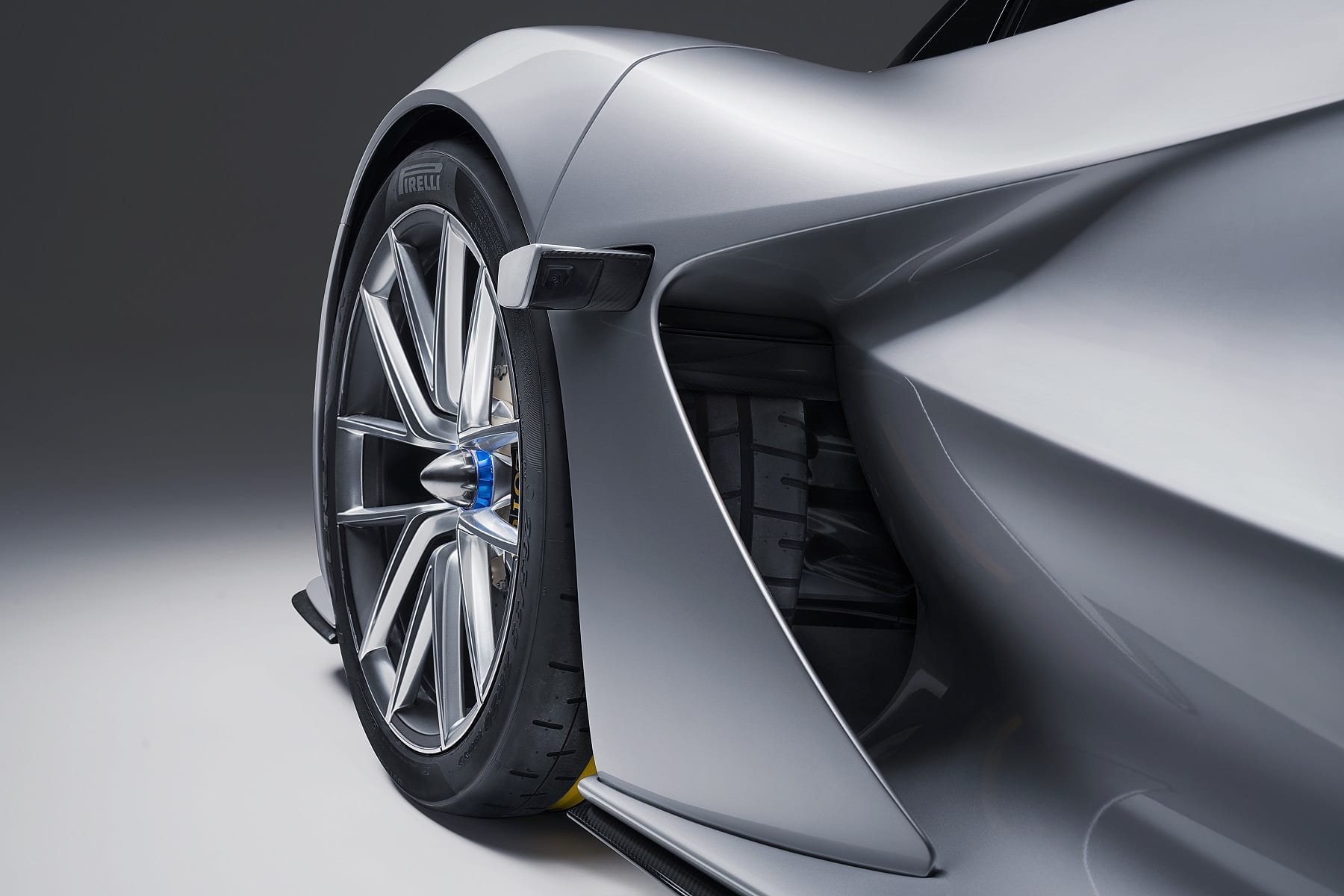 So what lies on the surface is outstandingly beautiful, but what lies underneath is equally impressive. It features Lotus’ first full carbon fiber chassis in a road car. Supplied by CPC from Modena, Italy, the one-piece carbon fiber monocoque chassis weighs just 284 pounds. The whole car is expected to weigh around 3,700 pounds – very un-Lotus-like, but lighter than any of its competitors, so it is kind of Lotus-like.

Then there’s the insane powertrain that puts it all in motion. Williams Advanced Engineering did their advanced engineering thing and developed a 2,000 kW lithium-ion battery for it as part of a joint venture with Lotus. The target figures are 2,000 PS / 1,972 horsepower and 1,700 Nm / 1,254 lb.-ft. of torque. It’s weird using four digits to talk about power on a Lotus. 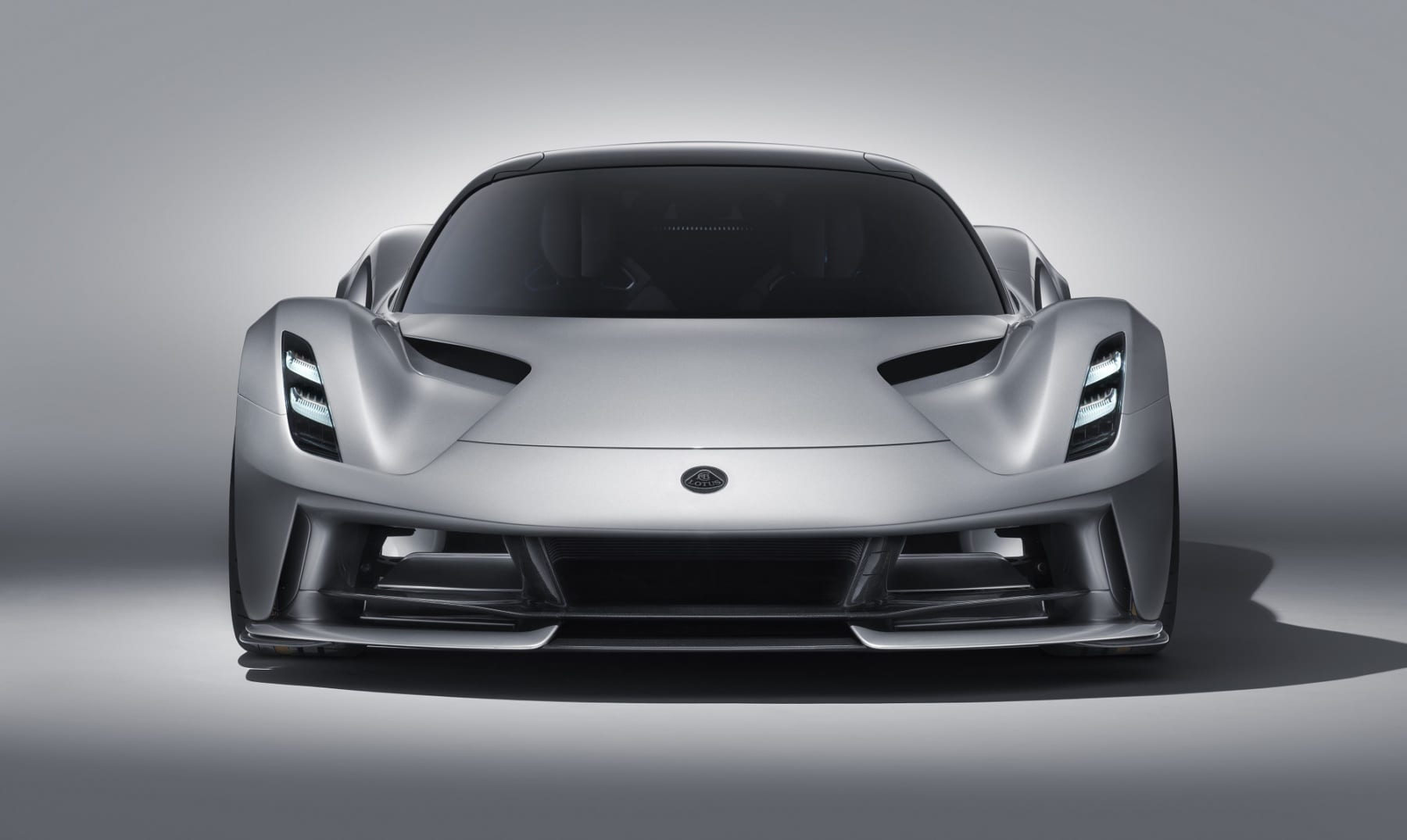 The battery pack is mounted centrally behind the passenger seat and is designed in such a way that it’s easily accessible for maintenance or for swapping another more powerful pack in. As for the running gear, Lotus goes into details that I’m not sure I can accurately cover myself, so I’ll just quote them:

Power is fed from the battery pack to a bespoke in-line axial arrangement of two high-power density e-motors. These feature integrated silicon carbide inverters and epicyclic transmission on each axle of the four-wheel drive powertrain. The motors and inverters being supplied by Integral Powertrain Ltd.

Four exceptionally compact, extremely light and highly efficient single-speed, helical gear ground planetary gearboxes transfer power to each driveshaft. Measuring a mere 100mm in depth, each gearbox comes packaged with the e-motor and inverter as a single cylindrical Electrical Drive Unit (EDU). With a target power of 500 PS per e-motor, this is the most efficient and elegant engineering solution to deploying so much power with precision.

Torque-vectoring, enabled by the four e-motors, provides exceptional dynamic response and agility on the road. This fully automatic, self-adjusting system can instantly distribute power to any combination of two, three or four wheels within a fraction of a second. In Track mode the ability to add more power to individual wheels enables the radius of corners to be tightened, potentially reducing lap times.

As you’d imagine, the anticipated performance numbers are pretty nuts. They perhaps were extra conservative on the 0-62 mph time and the top speed, which they claim is under three seconds and in excess of 200 mph. Technically correct, but surely not the whole story. For numbers that certainly aren’t being held back, 62 mph to 124 mph in less than three seconds, 124 mph to 186 mph in less than four seconds, and 0-186 mph in less than nine seconds. They went to great lengths to ensure they had a robust cooling system and they claim it can be driven flat out in track mode for at least seven minutes without power loss. Hmmm… which race track takes around seven minutes to lap? 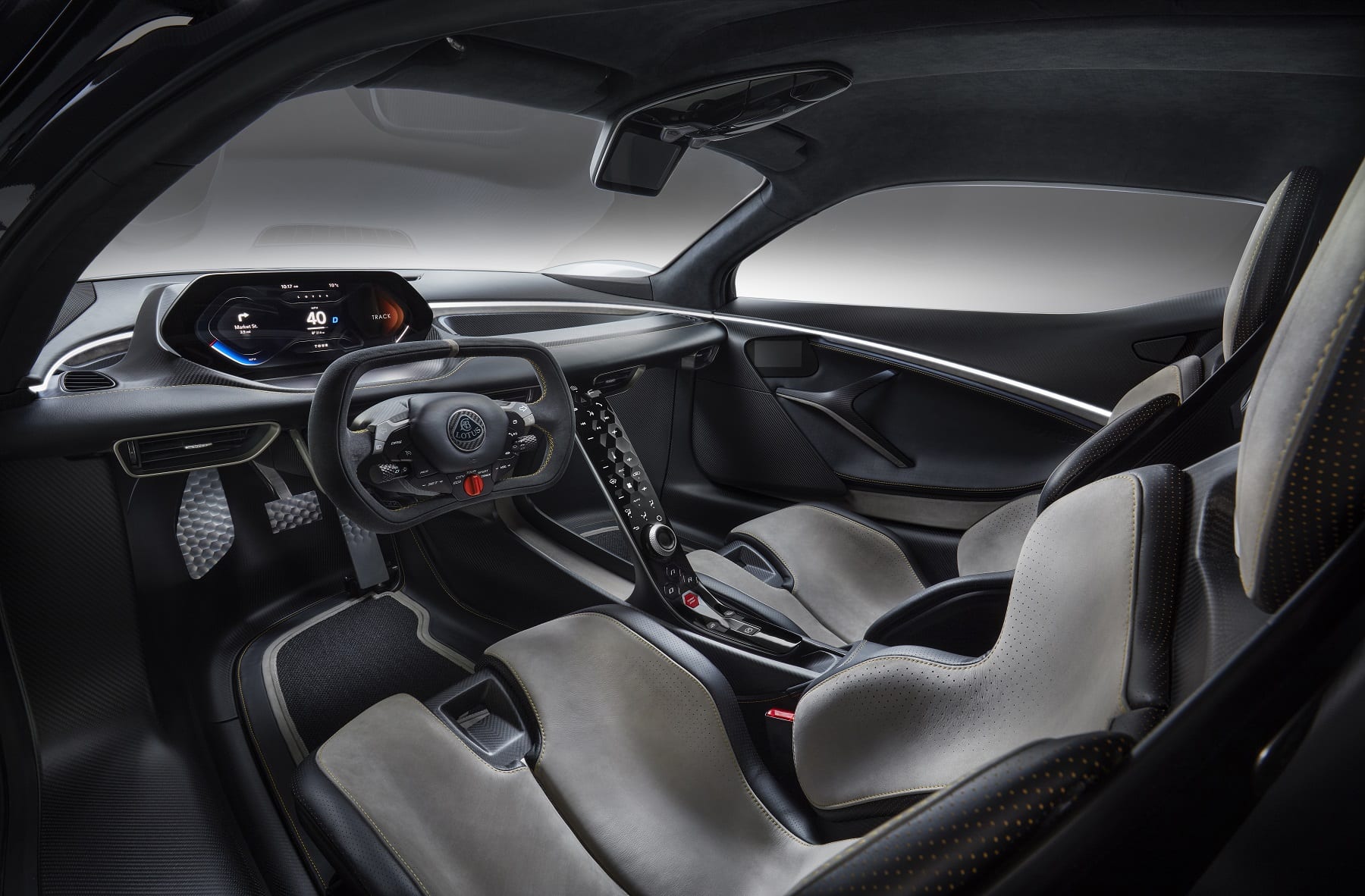 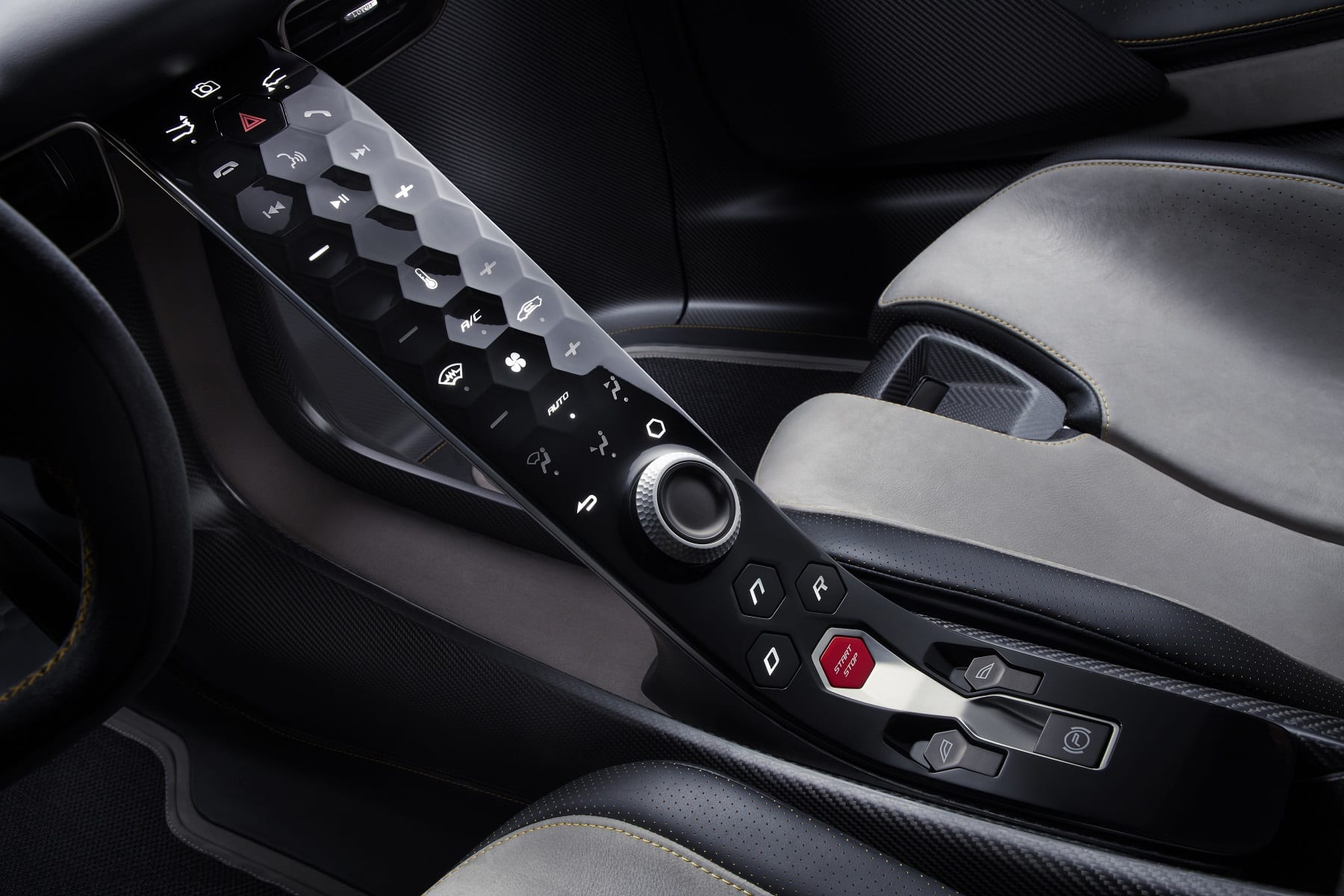 The Lotus Evijay is slated for production in 2020 with numbers limited to 130 cars.  It’s unclear if it’s reaching production exactly as-is, side view cameras and all, but they haven’t referred to this as a concept. It’ll certainly be going for lap records and class-leading numbers, but at the end of the day it still has to feel like a Lotus. They say it will live up to the pioneering principles which Colin Chapman used to build the first Lotus and I have no reason to doubt them.

To me, the Evijay seems to be a masterpiece in every sense. Finally, an electric car I can look up to. 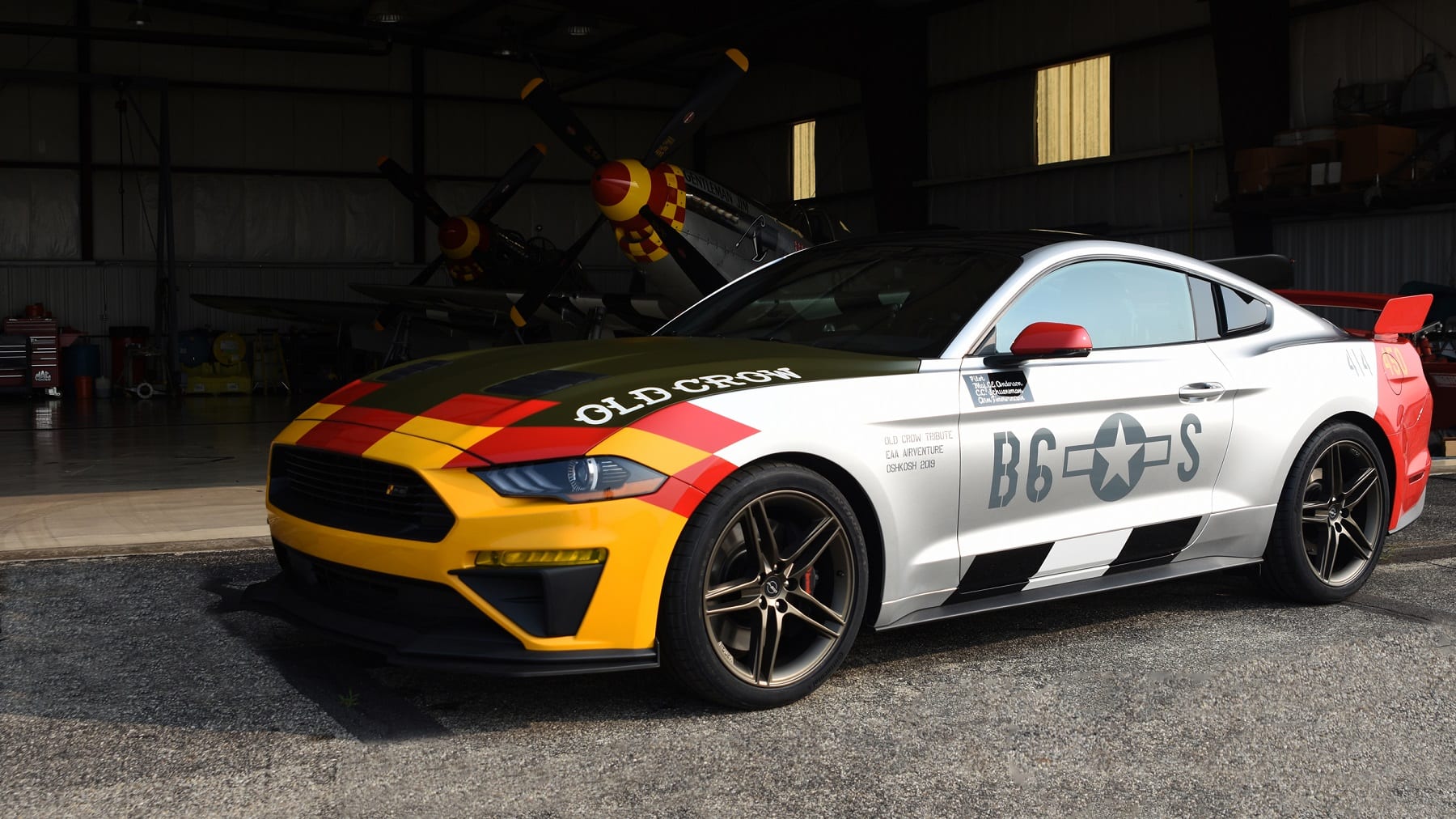 EAA AirVenture Oshkosh is a week away so that means it’s time to talk about one of Ford’s coolest annual traditions. For well over a decade now, Ford has built an aviation-inspired one-off Mustang (or sometimes a Raptor) for auction which benefits some of the Experimental Aircraft Association’s youth programs. The Blue Angels, Thunderbirds, F-35 JSF, the Red Tails, and even the Apollo missions have been honored with a themed Mustang. Sometimes they’ve chosen a particular aviator and their plane as the theme and they’ve done it again this year.

This year, Ford and Roush collaborated on a show car to pay homage to World War II triple ace pilot Colonel Bud Anderson of the U.S. Army Air Force and the legendary P-51 Mustang fighter planes he flew in combat – nicknamed “Old Crow.” The car is a 2019 Ford Mustang GT that’s been given the full Roush package, supercharger and all. It’s no coincidence that the P-51D was also supercharged. 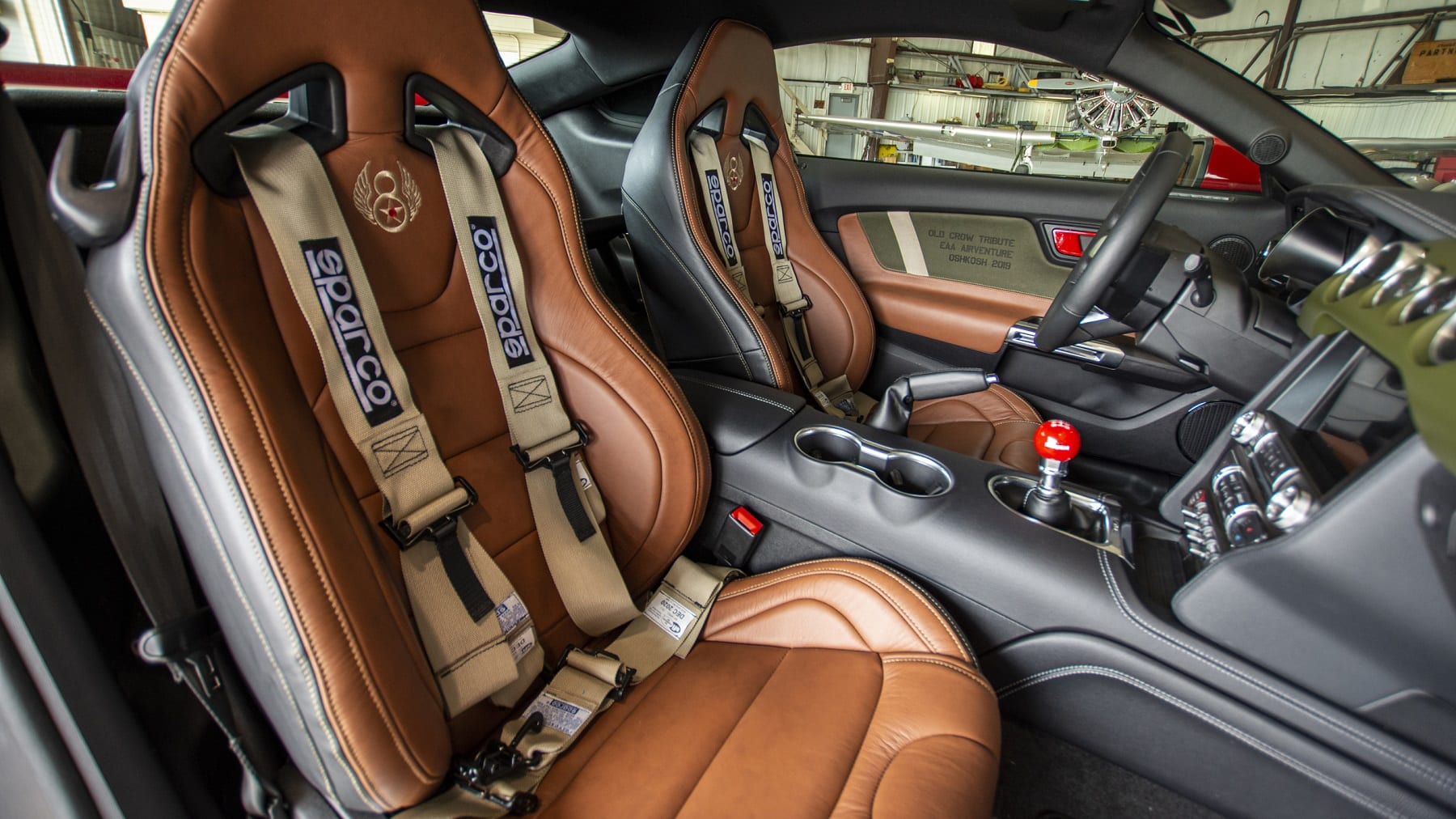 Roush supplied front fascia aerofoils, custom lightweight 20″ wheels, and a cool 710 horsepower. Ford Performance threw on the rear spoiler from the new GT500, custom active exhaust with blue rainbow tinting to emulate the exhaust on a P-51, and a custom military theme inside. And of course, the exterior carries the same paint scheme made famous by Old Crow. And when I say made famous, here’s how:

Col. Anderson achieved more than 16 aerial victories in Europe during World War II. He flew 116 combat missions, including a six-hour mission on D-Day. He was never struck by enemy fire or forced to withdraw from an aerial engagement during his career. Col. Anderson’s service earned him more than 25 decorations including the Distinguished Flying Cross, Bronze Star and Air Medal.

A hero gets a well-deserved tribute. Though I must say while the paint is on point, the car itself is still not as cool as last year’s Eagle Squadron Mustang by RTR. Ford may never top that one. 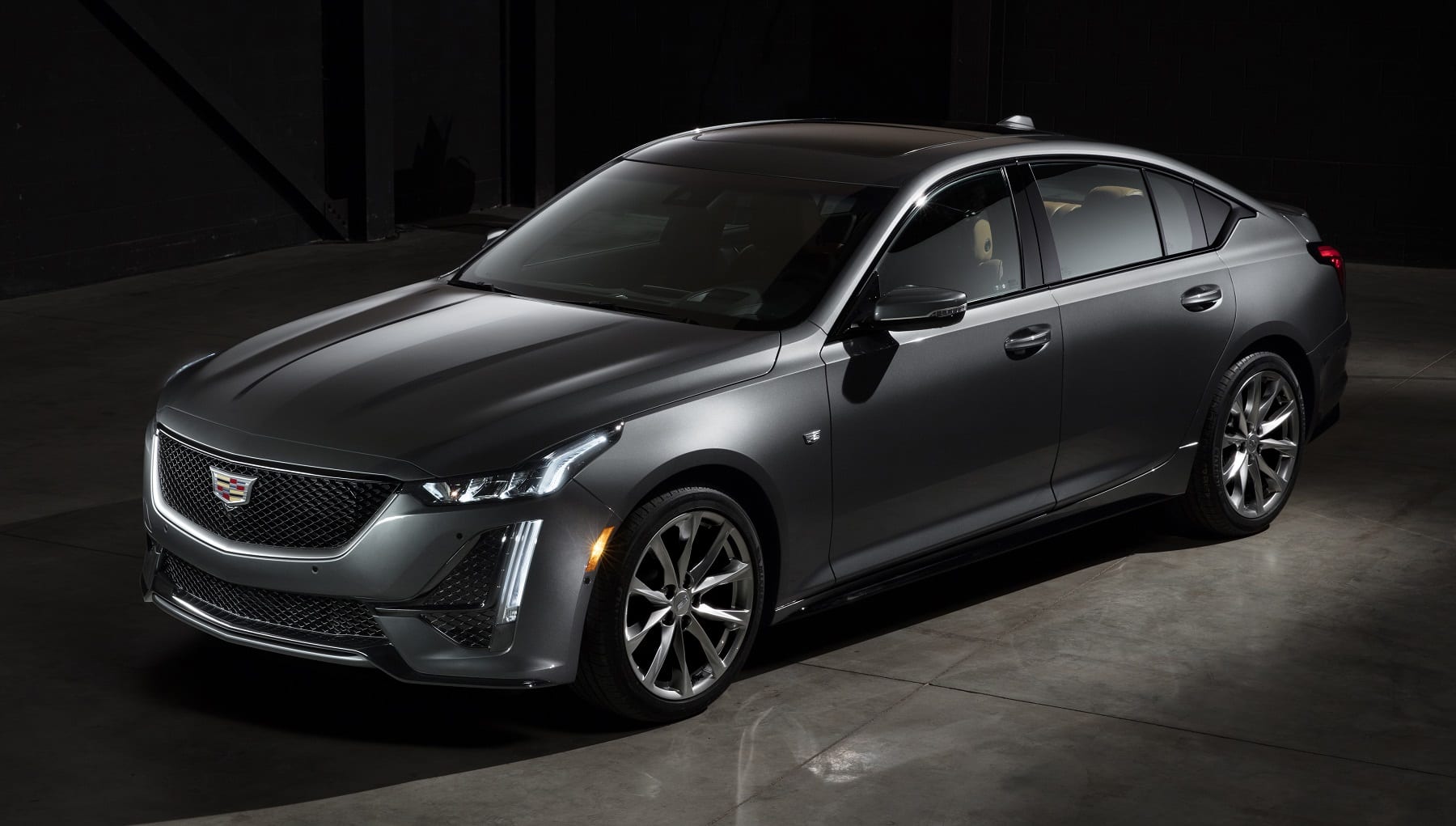 And that’s all I really have to say about it.