For the first time in 2019, welcome to the Hooniverse News! As always, this is a weekly recap of the biggest stories in the automotive industry without the fluff or bull. This week we have the Porsche 718 Cayman GT4 Clubsport, an out of this world BMW 8 Series, and confirmation of a Subaru WRX STI S209. Plus YOUR automotive news. 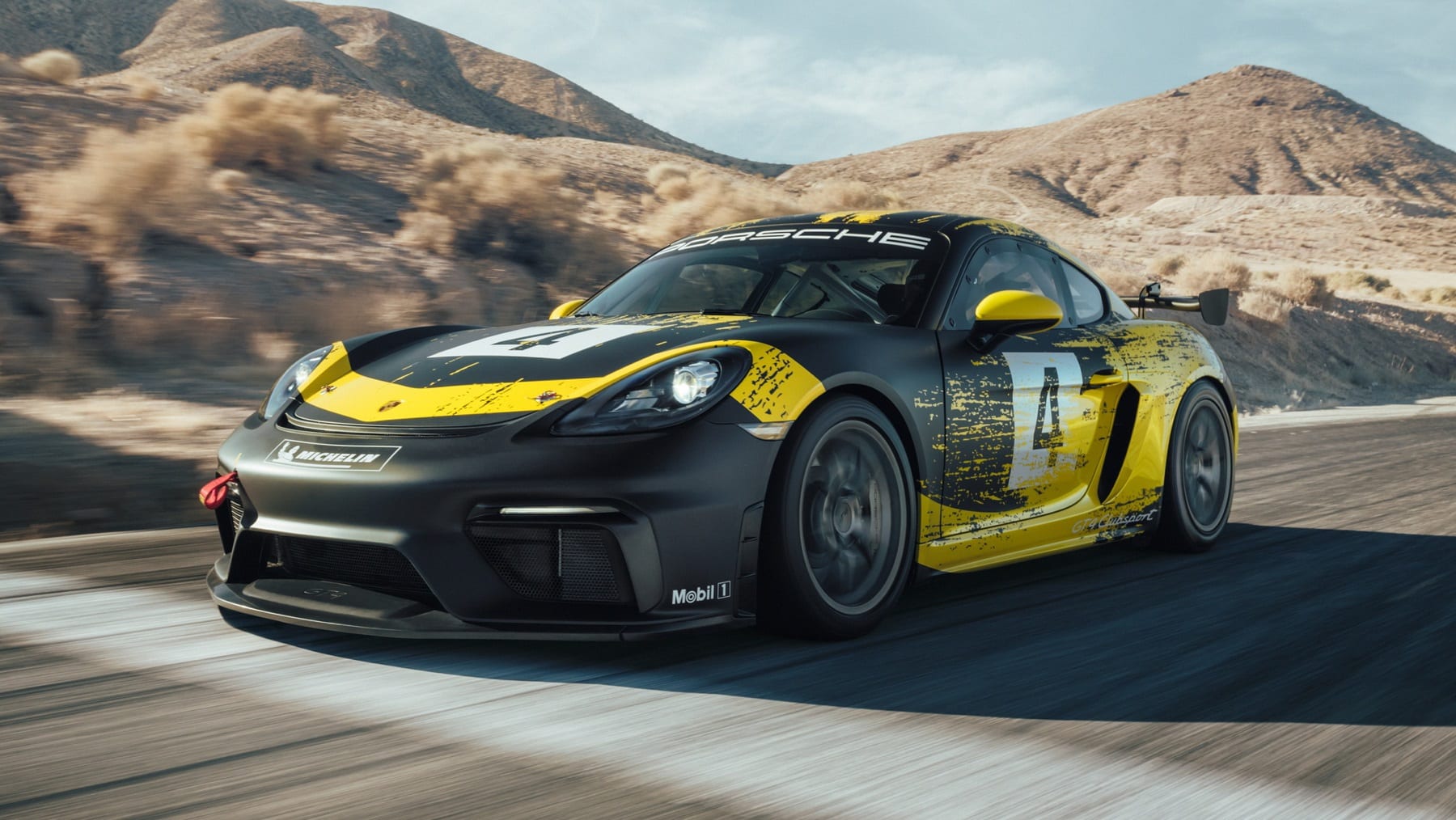 Let’s start this year off properly, shall we?

Porsche first revealed the Cayman GT4’s Clubsport variant for competition use three years ago and it’s been a popular option for privateer race teams and earned some impressive results along the way. Three years may as well be archaic in the world of motorsport though – after all, the street car it’s based on has been out of production for two years. To keep up with the ever changing world of motorsport, Porsche has revealed the latest GT4 Clubsport based off the current 718 platform… but with one very welcomed exception. 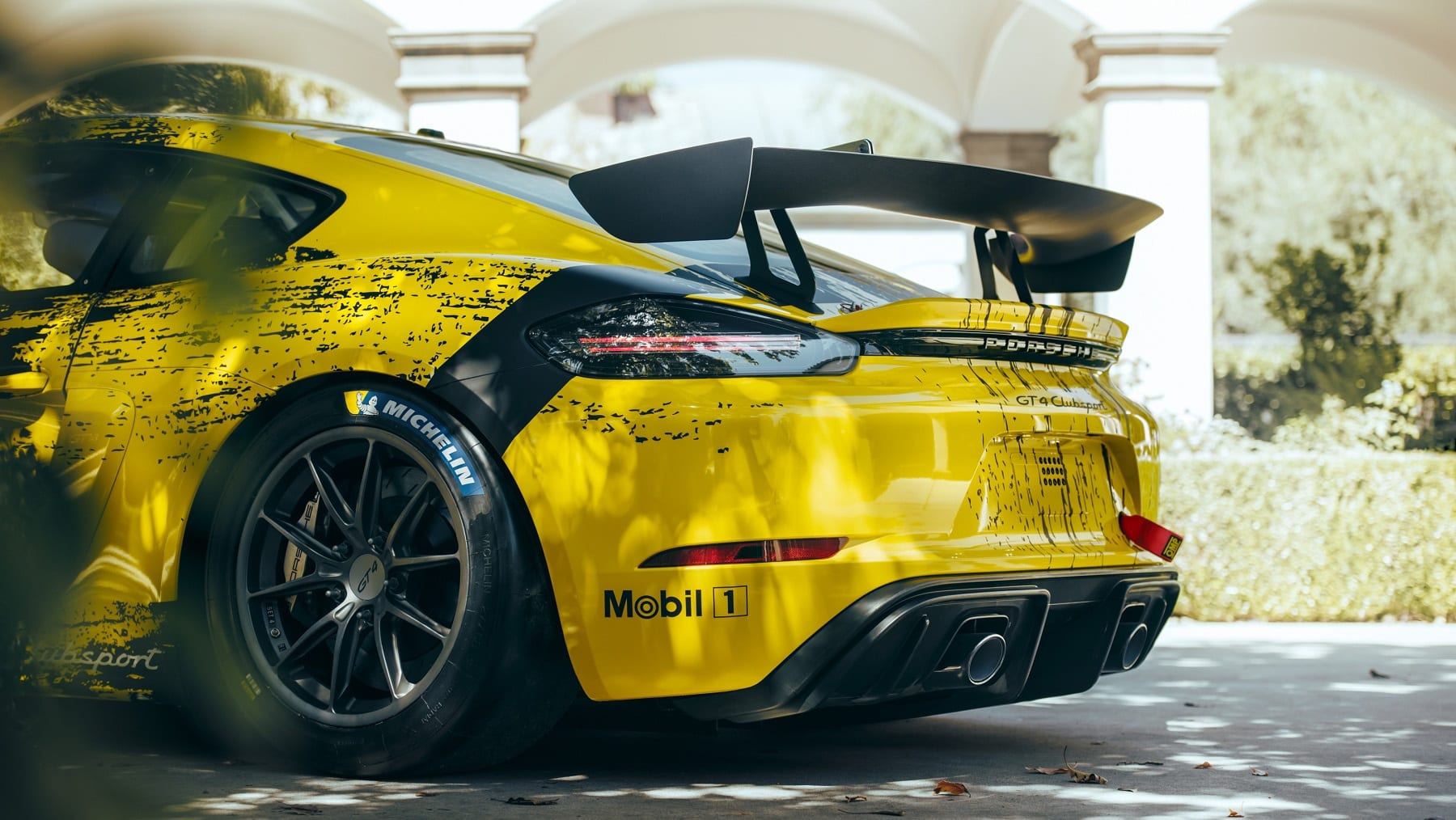 The famous naturally-aspirated flat six lives on in the new 718 GT4 Clubsport after all. But that doesn’t mean the engine is unchanged and that the rest of the car is a reskin of the outgoing model. Not even close.

One of the many updates made to the 718 Cayman GT4 Clubsport is the introduction of two “models”, so to speak. The first is a “Trackday” version which is geared towards “ambitious amateur racing drivers” (or people who just want to have fun in a factory-built racecar) and the other is the full on Competition version that you’ll actually see competing in a GT4 field near you. 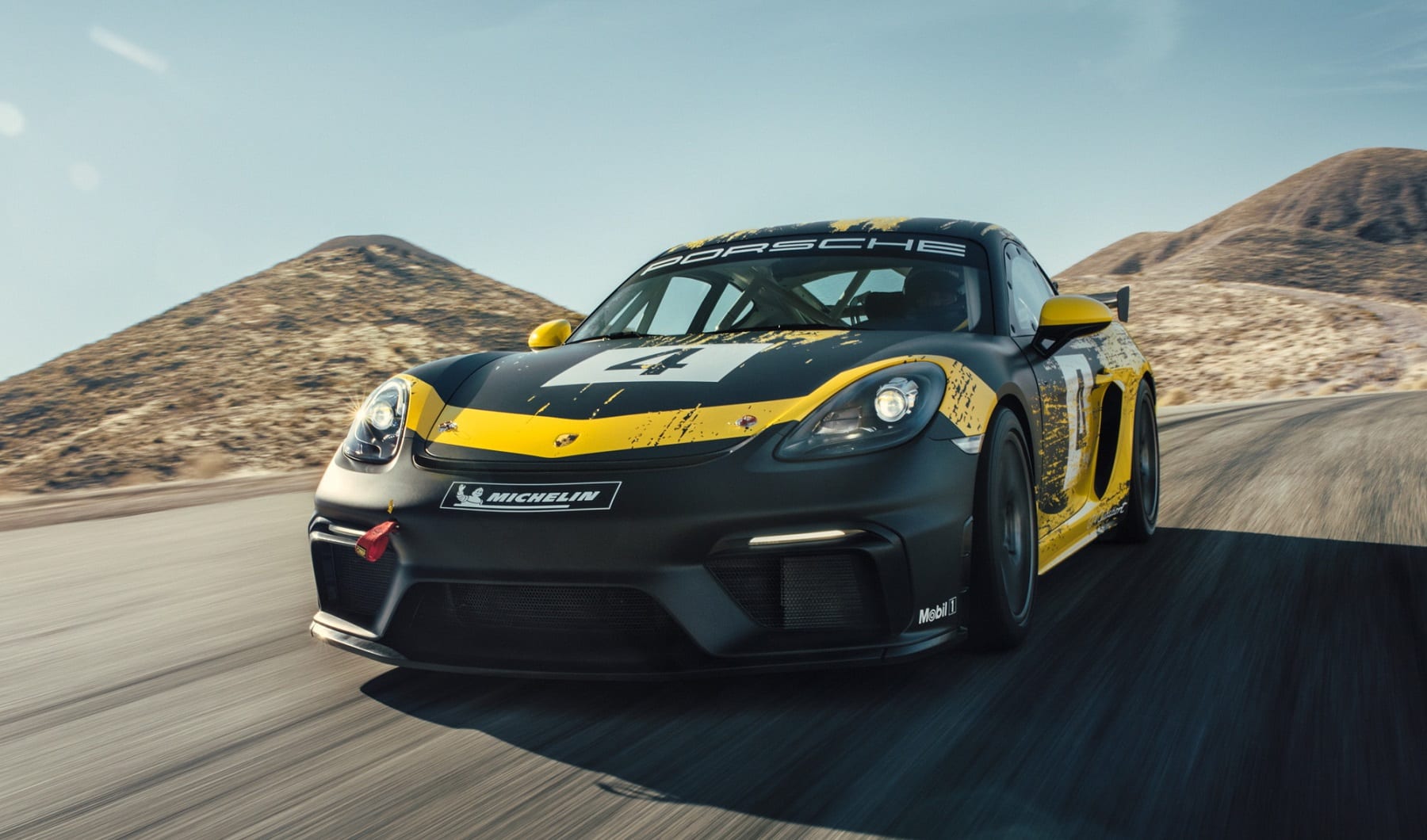 The fundamentals are the same between the two, but the Trackday version lacks some of the features of the Competition and is meant for drivers who want to participate in private track and clubsport events without major effort and outlay. The Trackday model comes with fixed shock absorber setup, more forgiving driver assistance systems (which can still be turned off), a handheld fire extinguisher, and even air conditioning. Lending to that “without major effort and outlay” part, the Trackday model can be serviced at all Porsche service centers. No need to hire your own mechanics for this one. 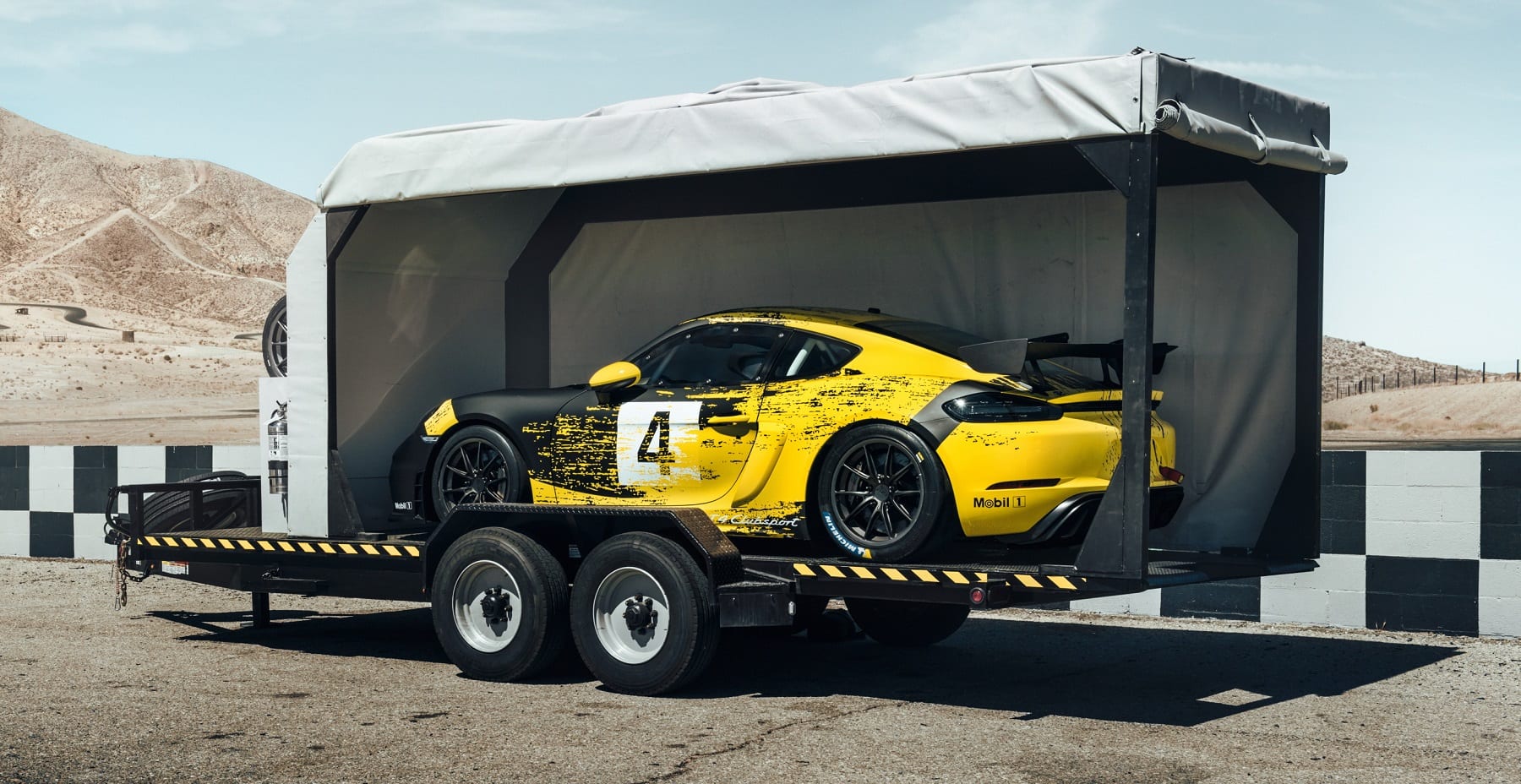 One neat thing that both cars share is the world’s first use of sustainable raw materials on a production race car. Both doors and the rear wing are made of an organic fiber mix that’s primarily sourced from agricultural by-products such as flax or hemp fibers and feature similar properties to carbon fiber in terms of weight and stiffness. New technologies still trickle down from motorsport to the street, so here’s hoping we see more of this in the future. 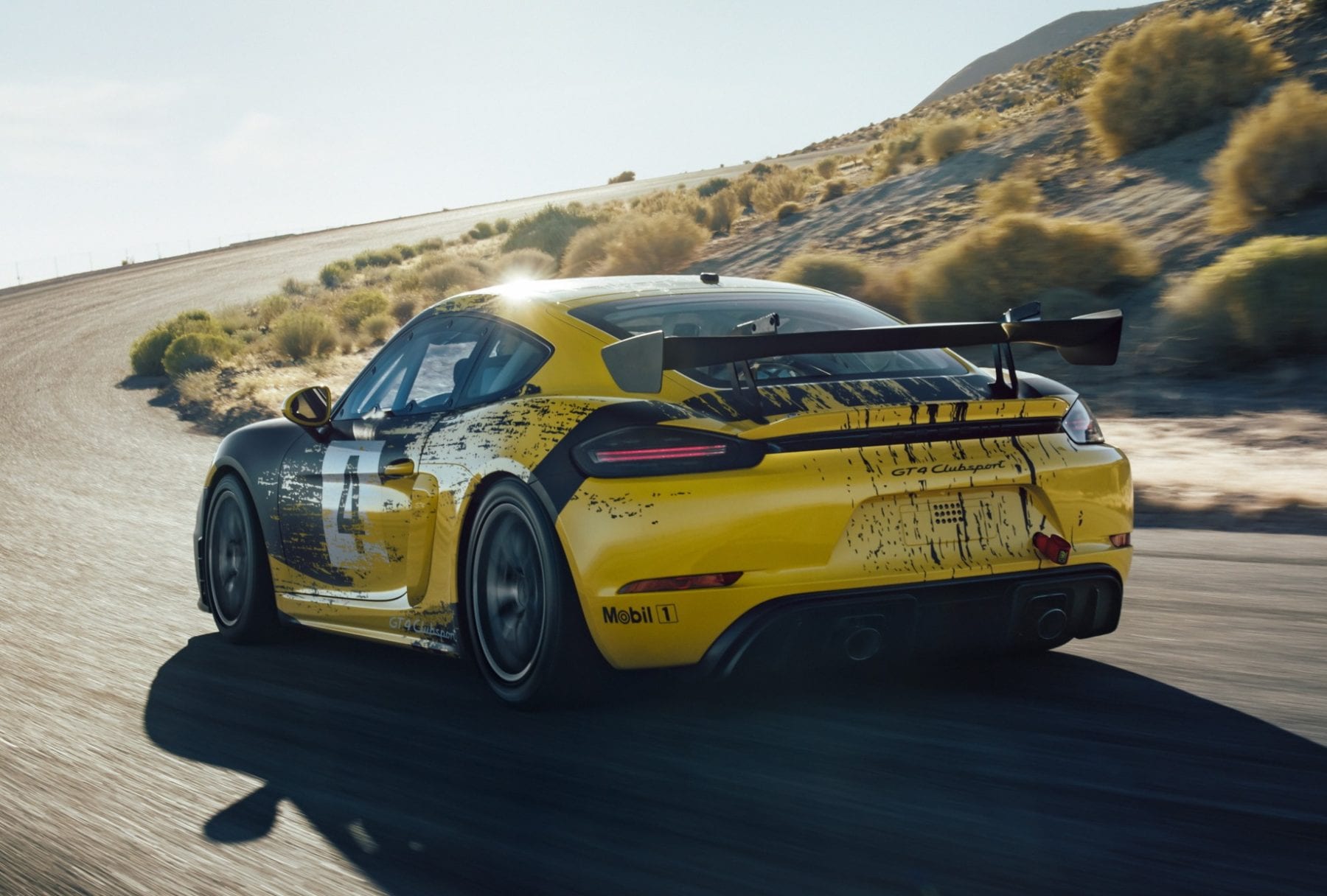 Now for more of the hardware specs. Powering the 718 GT4 Clubsport is a good ole 3.8-liter flat-six with 425 hp at 7,800 RPM (a 40-hp increase over its predecessor) and 313 lb.-ft. of torque at 6,600 RPM. A near factory-issue six-speed PDK gearbox with additional cooling and hardening plus a mechanical rear axle differential lock handle power delivery. A Cosworth instrument cluster ICD with integrated data logger is the brains of the car.

Up front, the lightweight spring-strut suspension is taken from the 911 GT3 Cup. Braking is handled by steel discs measuring 14.96 inches all around and six piston calipers front and four piston calipers rear (each with anti knock back springs). The car rides on one-piece light-alloy forged wheels with a new weight-optimized design. Even with all the safety equipment and electronics on board, the car still weighs in at right around 2,900 pounds. 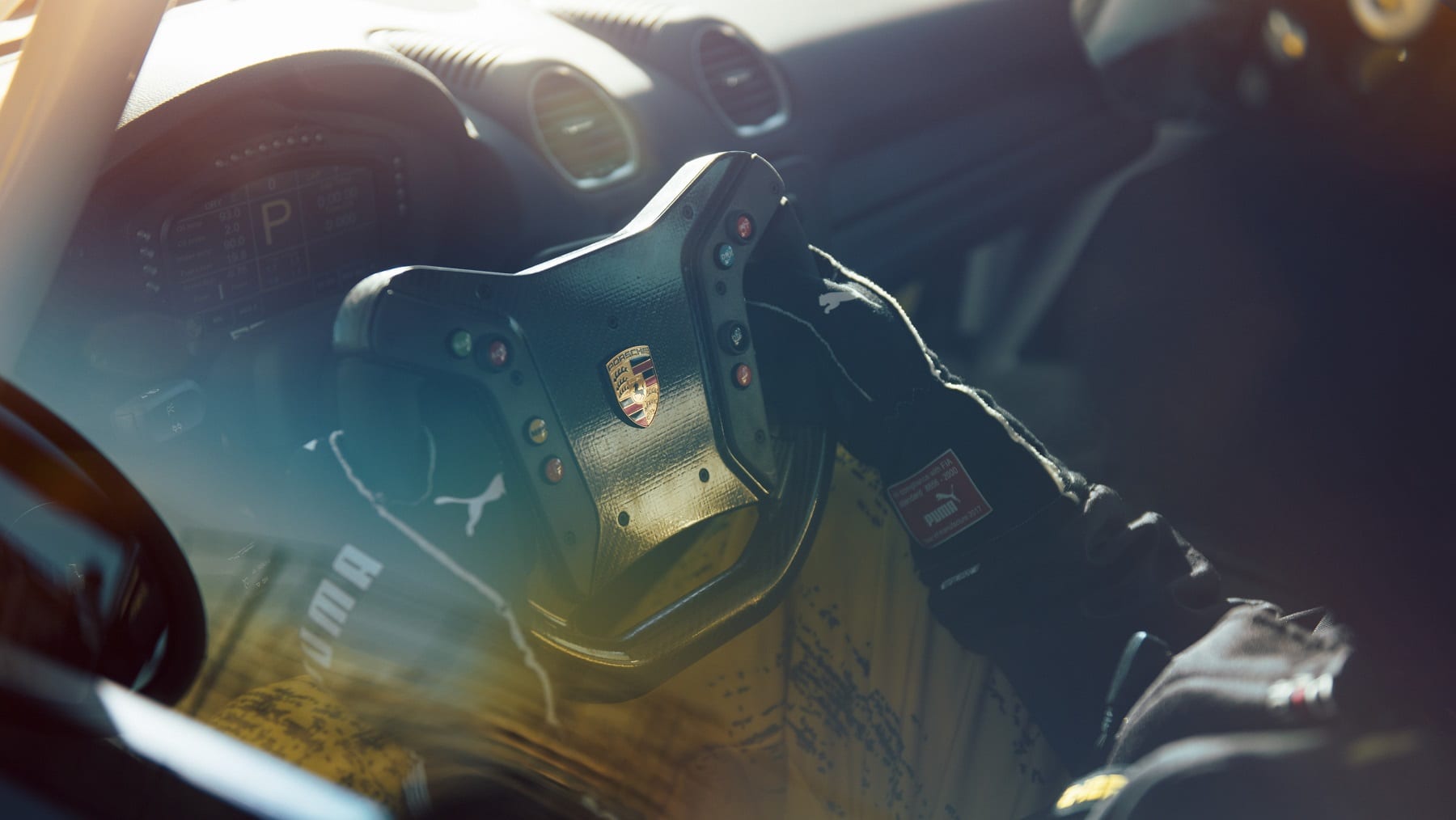 Deliveries of both 718 Cayman GT4 Clubsport versions will commence this February. Prices for the Trackday version start at roughly $152,000 while the Competition model commands nearly $179,000.

The prospect of a true clubsport version of a GT4 race car is brilliant. Tons of manufacturers will sell you ridiculously expensive supercars with a little more carbon and no floor mats as being “track day specials” when they couldn’t hold a candle to what this little 718 Cayman GT4 Trackday model can certainly deliver. You could probably get a quicker lap time out of a $152,000 car, but you couldn’t repeat that lap across an extended track day session. This is a car that’s literally built for track use.

The downside of course is that it’s not road legal, but if you’re looking at a track day toy in that price range you’d be foolish to overlook this. I can’t find the name of it now, but Ford sold a handful of their GT350R-C GT4 race cars as stripped down track day toys too. Hopefully this is becoming a trend. 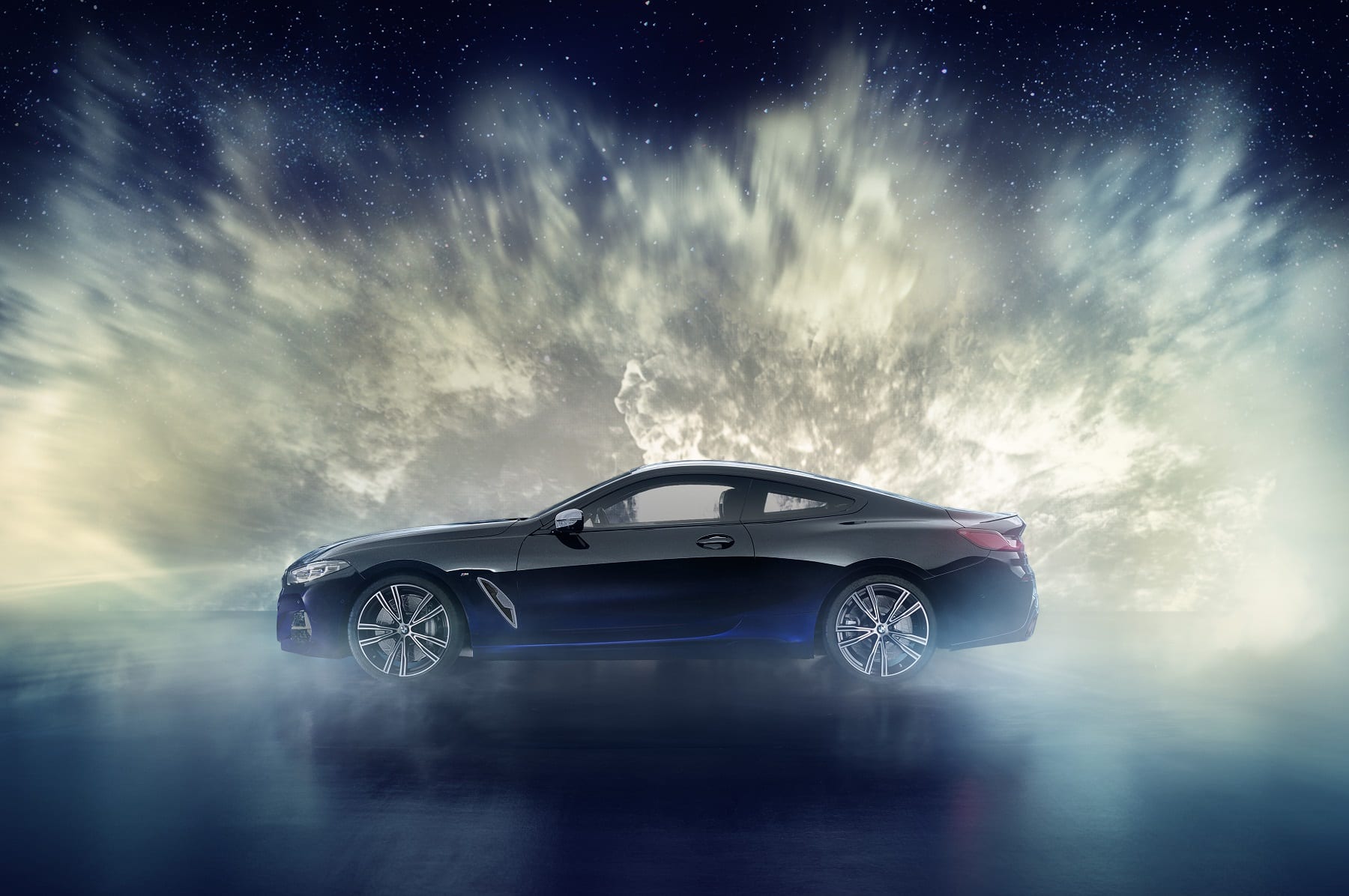 There was once a rock.

This rock was one of billions of celestial beings floating freely and gracefully through the vast expanse of the universe, but wasn’t always so fortunate. It was once part of a barren and lonely world hundreds of thousands of light years away from where it was now. There was little light, no water, and temperatures ensured no life could survive. This was the home it knew for 4 billion years, but this rock had dreams. It often looked up and gazed in wonder at the night sky. “What’s out there?”, it frequently asked. But one day it was given a chance at a new life. Finally broken free from of the miserable realm it called home and this rock was finally allowed to see the parts of the universe it dreamt of. 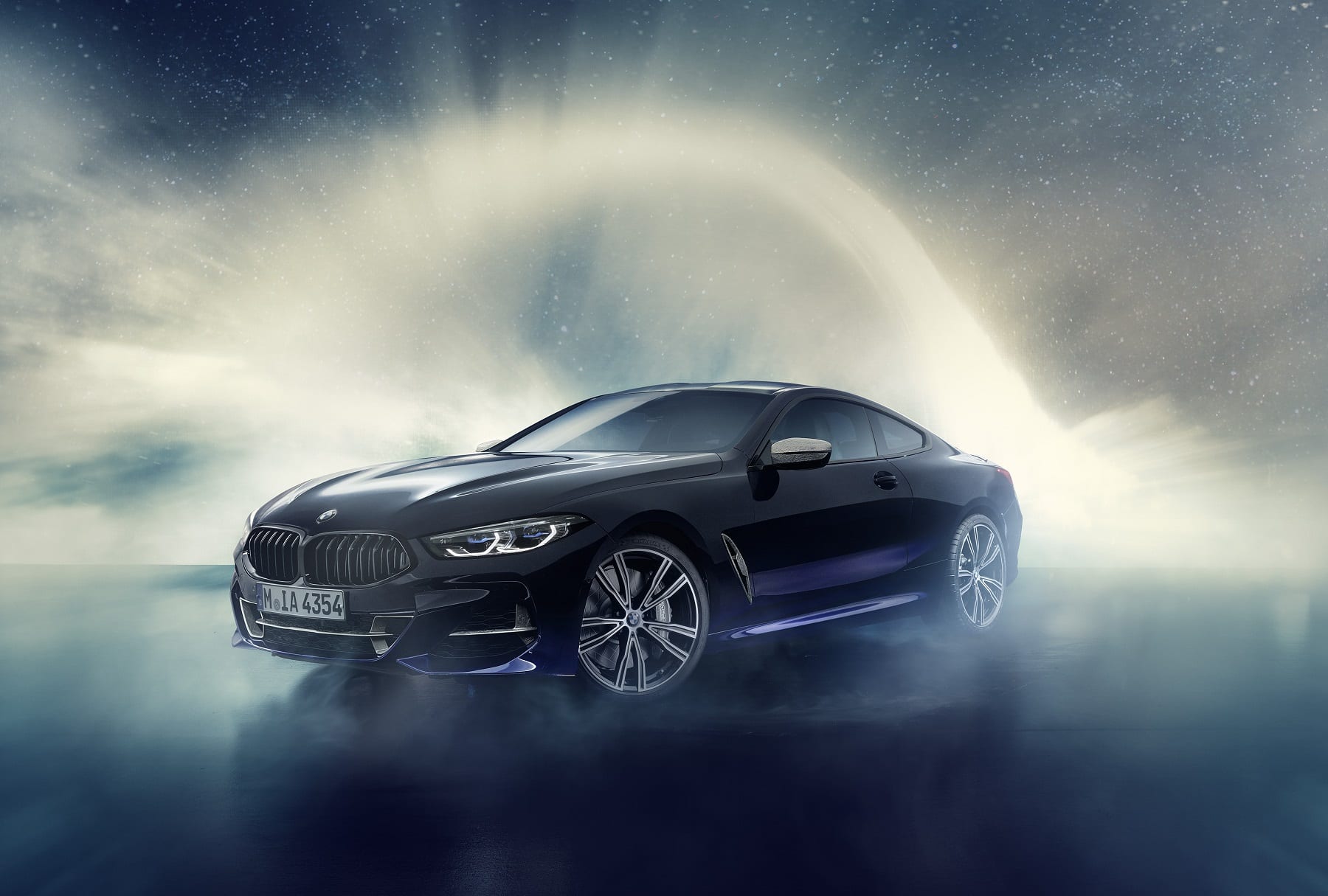 It spent the next hundred million years of its life transiting from system to system looking for answers. As it found breathtaking nebulas, strange planets, and huge radiant stars, it only had more questions than answers. It would often try to settle down and find a forever home in an asteroid belt every couple million years, but it was never able to fit in. Feeling increasingly dejected, the rock thought it would be lost in this void forever. But one day its path intersected with that of a new planetary system – ours.

It looked similar to many of the other five hundred systems it flew through before, but as our rock flew through the endless clutter, its path began to line with that of a new world that was vastly different from others it had toured. “This is the one”, the rock thought. It had come close to new worlds so many times before, but never this close. The rock’s excitement grew as this strange new world came into focus.

After a seemingly endless voyage that brought it to every corner of the galaxy for hundreds of millions of years, the rock entered the Earth’s atmosphere having defied the impossible odds.

“Fuck this is hot”, the rock said as much of its form was burned off as it moved through air molecules for the first time, its sheer speed becoming apparent. But there was no turning back. Its wondrous journey ended with a brilliant streak of light across the sky.

Before it could get acquainted with its new life, the rock was scooped up and turned into an iDrive control knob on a space-themed BMW 8 Series. 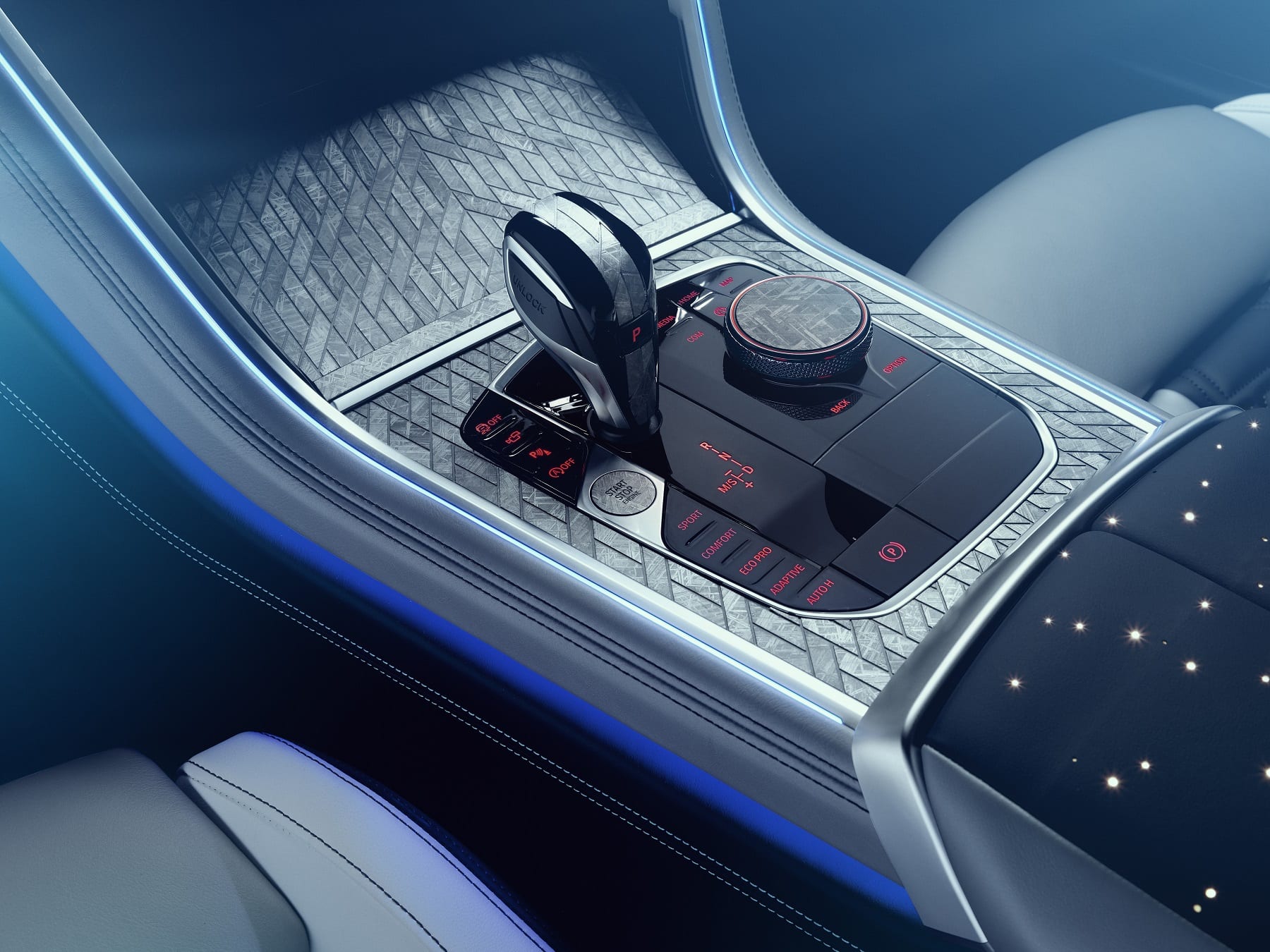 The BMW Individual M850i Night Sky is one-off show car that incorporates materials from real extraterrestrial fragments throughout its cabin. To celebrate a meteor shower or something and show off how much customization is possible with BMW Individual, BMW commissioned a space-themed 8 Series that went way beyond special paint and some constellations on interior surfaces. BMW sourced materials that were literally out of this world – like our rock friend – to create the center console’s trim plate, the start/stop button, the gear selector lever, door sill finishers, and the Touch Controller for the iDrive system. 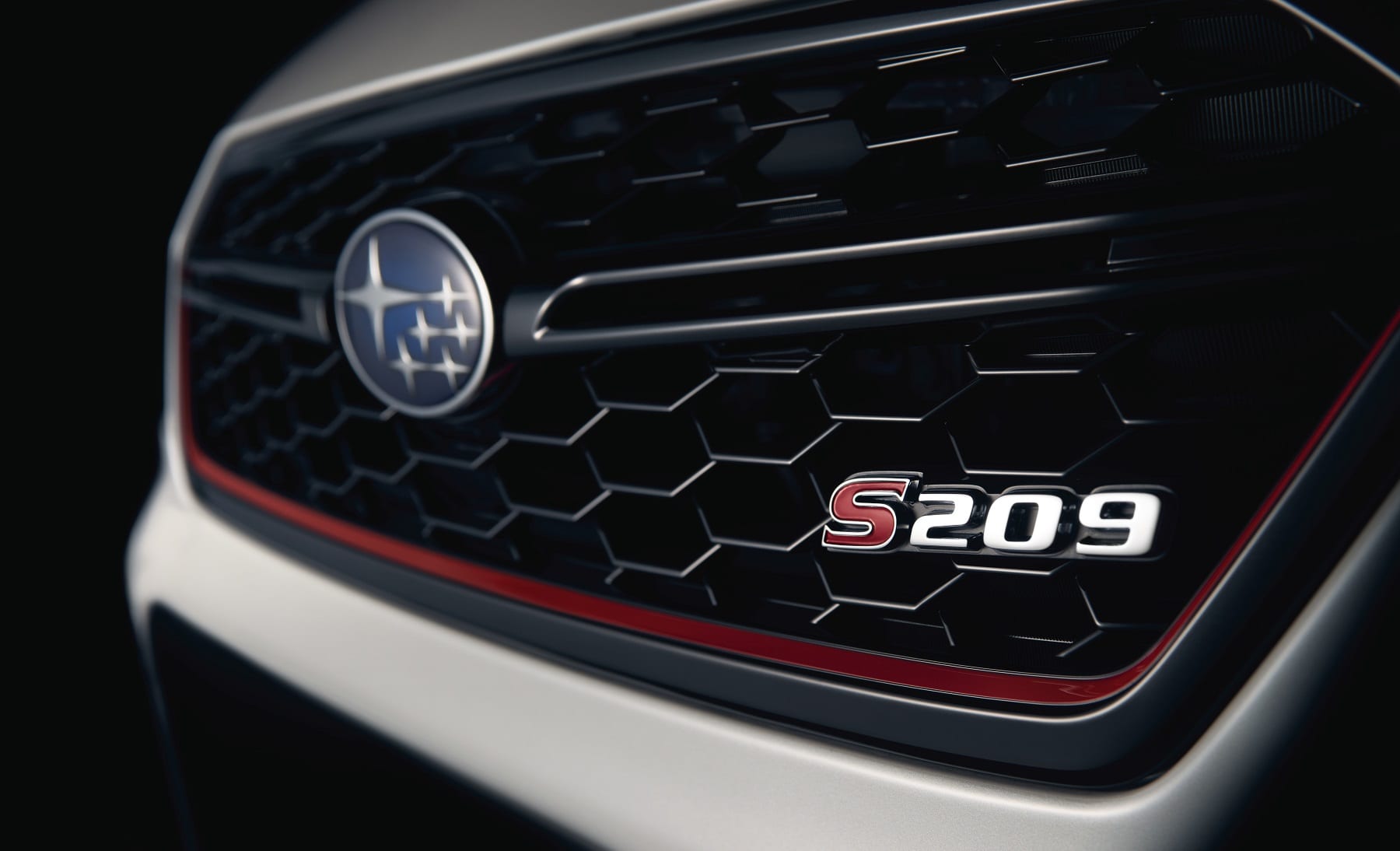 A special edition WRX STI dubbed “S209” will be making its debut at the North American International Auto Show in Detroit.

Though little is known about it now, we can safely assume it’ll be a new way to repackage the same car to us while maybe giving it ten more horsepower than the car did 15 years ago. Typically the “S20#” editions are the lightest of lightweight Subarus, so maybe this one will follow suit and breathe some new life into a very tired platform. Or it’ll just be a more expensive WRX STI Type RA. Either way, we’ll learn how Subaru will disappoint us next on January 14th.