Welcome to the Hooniverse News! As always, this is a weekly recap of the biggest stories in the automotive industry without the fluff or bull. This week: Cadillac gives us proper V Series cars, Nissan finally introduces new Frontier, hell freezes over, Nissan Pathfinder also gets redone, Ford partners with Google for new in car tech and connected mobility solutions, plus some other news from the week. 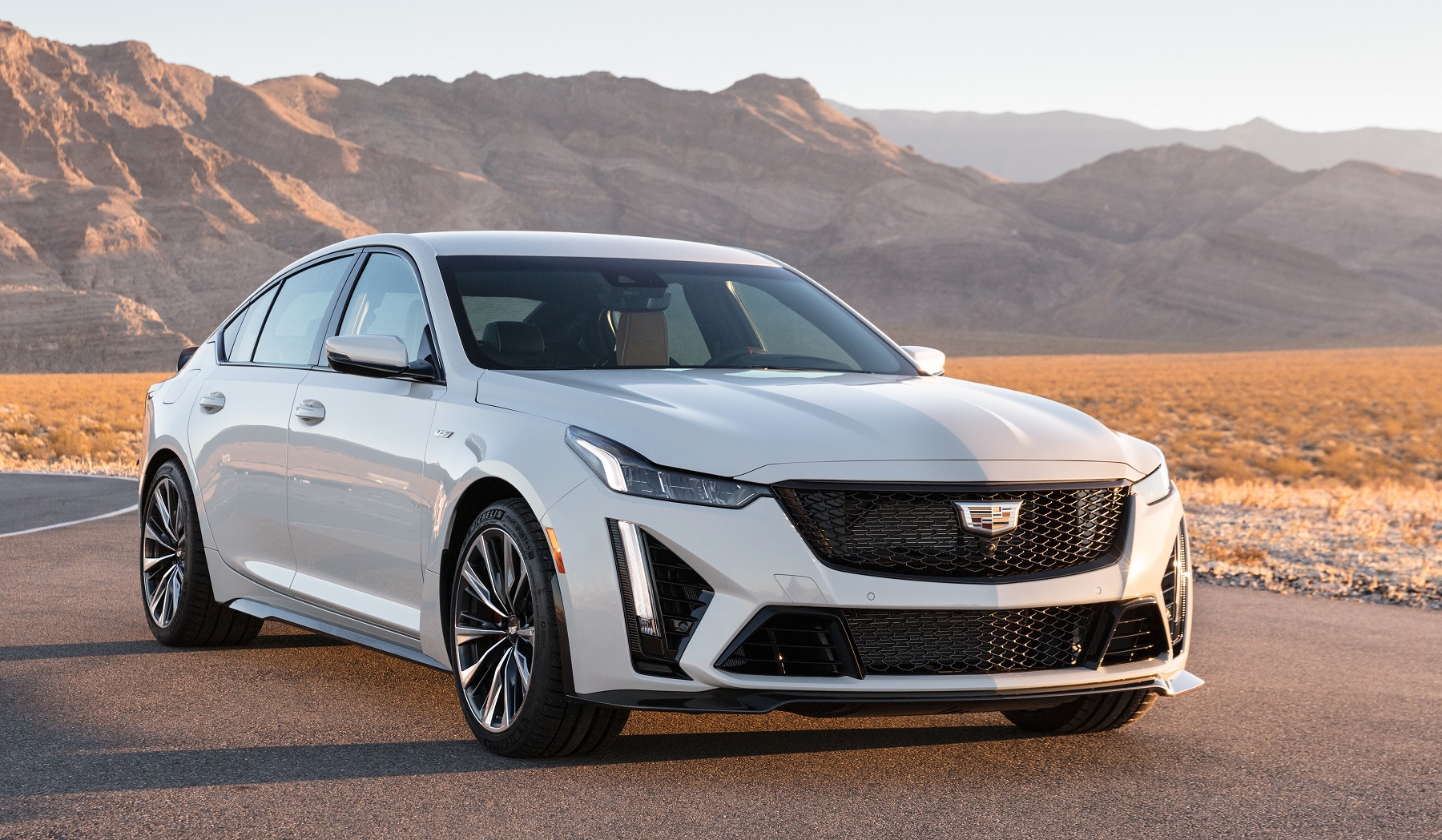 It’s been hinted at for years, spied constantly, and even delayed a few times, but it’s finally here. The real V-Series Cadillacs. The true successors to the CTS-V and ATS-V that once dominated the spotlight at Cadillac were unveiled this week and expectations were exceeded. Say hello to the Cadillac CT4-V Blackwing (red) and CT5-V Blackwing (white), two love letters to V-Series enthusiasts that could be a last hurrah. Not to be confused with the limited run of Cadillacs that featured an advanced, German-like engine that was called the Blackwing, these Blackwings are among the fastest and most powerful Cadillacs ever produced. I don’t know why Cadillac decided to use the same name for two very different things either. 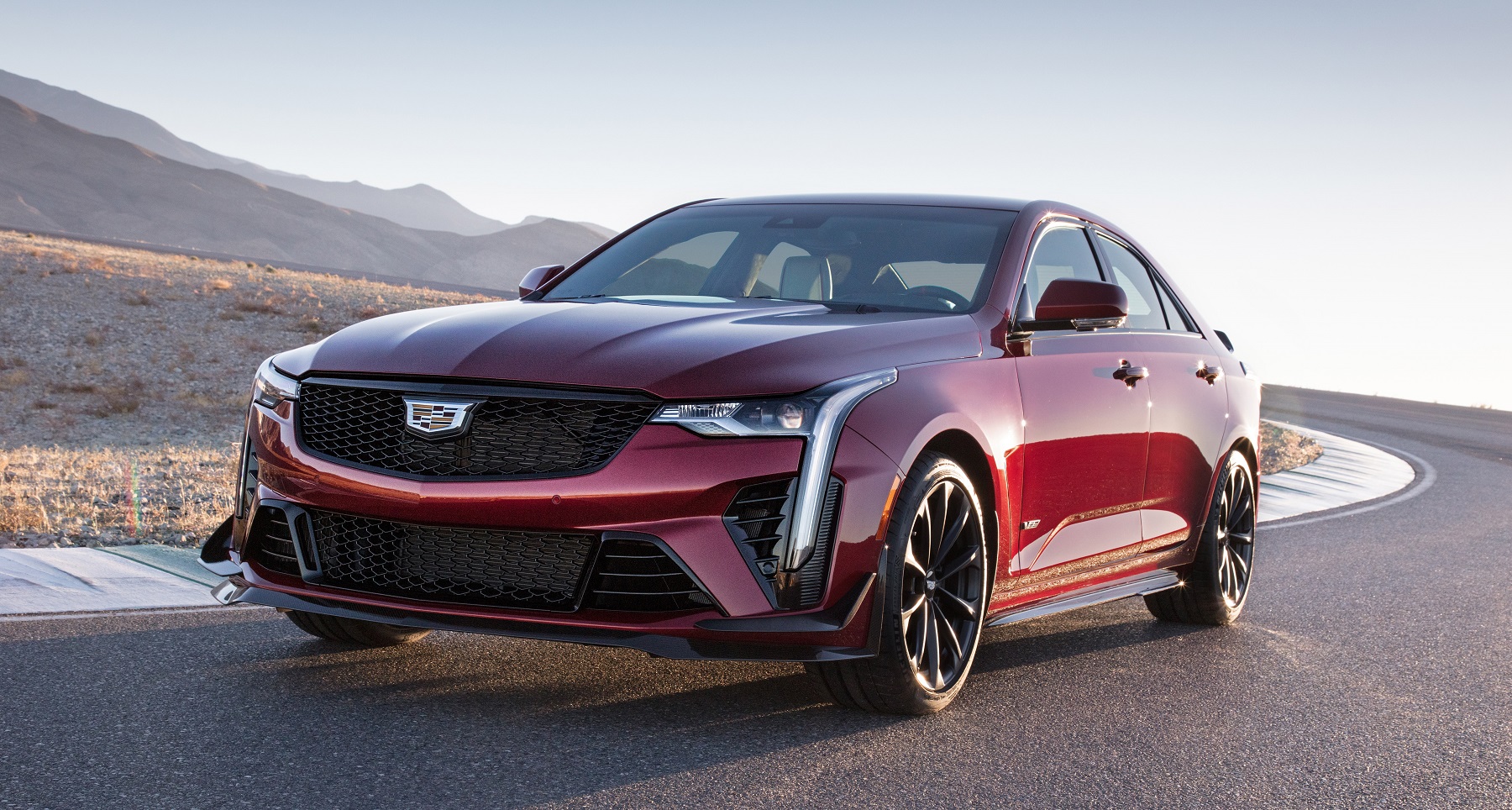 The now defunct Blackwing motor may have been slated to find a home in one or both of these cars, which could have been cool. But the engines we’re getting instead are a bit more familiar and just as cool as before. Both offer excellent performance in just slightly different ways. The CT4-V, successor to the ATS-V, utilizes a 3.6-liter twin-turbocharged V6 with an impressive 472 horsepower and 445 lb.-ft. of torque. Meanwhile, the CT5-V, the CST-V’s successor, gets the mighty 6.2-liter supercharged V8 with 668 horsepower and 659 lb.-ft. of torque. This makes the CT5-V the most powerful Cadillac ever produced.

While one car may be quite a bit faster than the other, both will be plenty capable on fun roads and race tracks. Cadillac isn’t one to just throw a load of power at something and leave the rest alone… at least not anymore. Both cars receive staggered Brembo six-piston front and four-piston rear calipers and large discs all around. CT5-V gets 15.67 inches front and 14.7 inches rear while the CT4-V gets 14.96 inches front and 13.4 inches rear. The CT5-V however gets a unique option for lightweight carbon-ceramic brakes which reduces unsprung weight by 53 pounds, reduces rotation mass by 62 pounds, and improved heat management. Fourth-generation Magnetic Ride Control and a host of other chassis upgrades keep the cars hunkered down and on their toes at the driver’s will. The cars feature stiffer spring rates, unique hollow stabilizer bars, higher-rate bushings, and those improved magnetic dampers to both isolate the driver from road imperfections while also providing a precise connection to the road. That’s of course what everyone says about their ride quality so we’ll have to wait and see for ourselves.

When I said this was a love letter to enthusiasts, here’s why. Manual transmissions are not only available on both cars, they’re standard and were a major focus in the marketing for these cars. Few sports sedans still offer these things and Cadillac put proper effort in theirs. A six-speed Tremec gearbox was chosen for the job and beefed up with extra cooling for track work. It’s paired with a Luk twin-disc clutch for high torque capacity and great pedal feel, active rev matching (can be turned off), no-lift shift, a physical barrier stop for the clutch pedal, a short shifter, and proper pedal positioning for optimal ergonomics. For those who don’t need a manual to have fun, a very quick ten-speed automatic with magnesium paddle shifters is also available. Cadillac says they put the automatic transmission cars through a 24-hour continuous track test to prove its durability. The manual car was put through a 12-hour test for the same purpose. 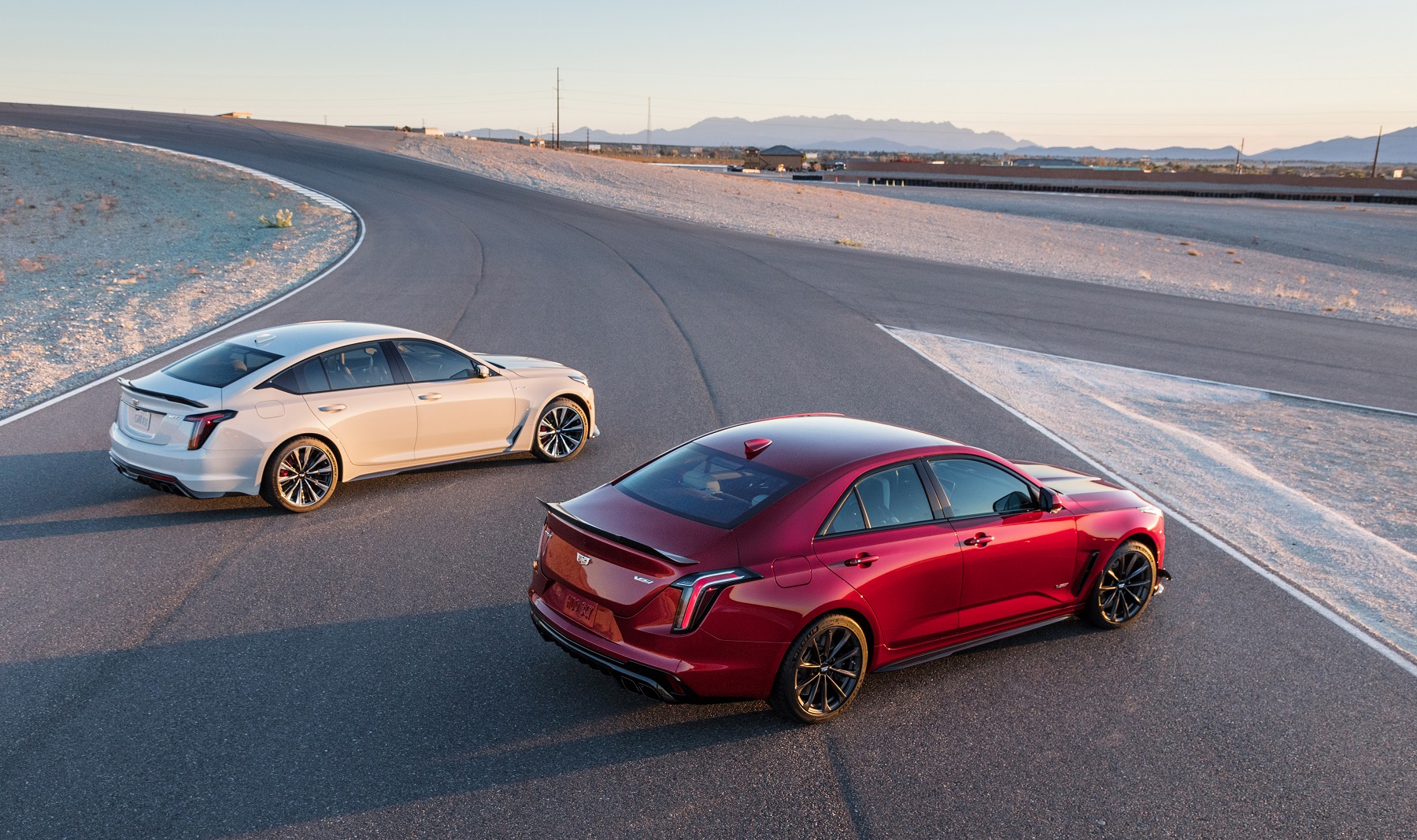 Regardless of how power is transferred to the rear wheels, an electronic limited slip differential offers more flexibility and grip in various situations. Cadillac worked with Michelin to develop their own version of the fabulous Pilot Sport 4S tire to be used on both models. This results in a unique, multiple-compound tread composition and a mold shape specifically engineered to optimize contact with the road to go with the Blackwing’s geometry. They’re beefy tires too with 255/35ZR18 (front) and 275/35ZR18 (rear) on the CT4-V and 275/35ZR19 (front) and 305/30ZR19 (rear) on the CT5-V.

With the world going the way it is, we certainly won’t be seeing cars like this for very much longer. This was a big passion project for the people involved and I suspect their passion will be evident when people start driving them. Reservations are open now and deliveries will commence later this summer. The CT4-V Blackwing will start at $59,990 and the CT5-V will command $84,990. 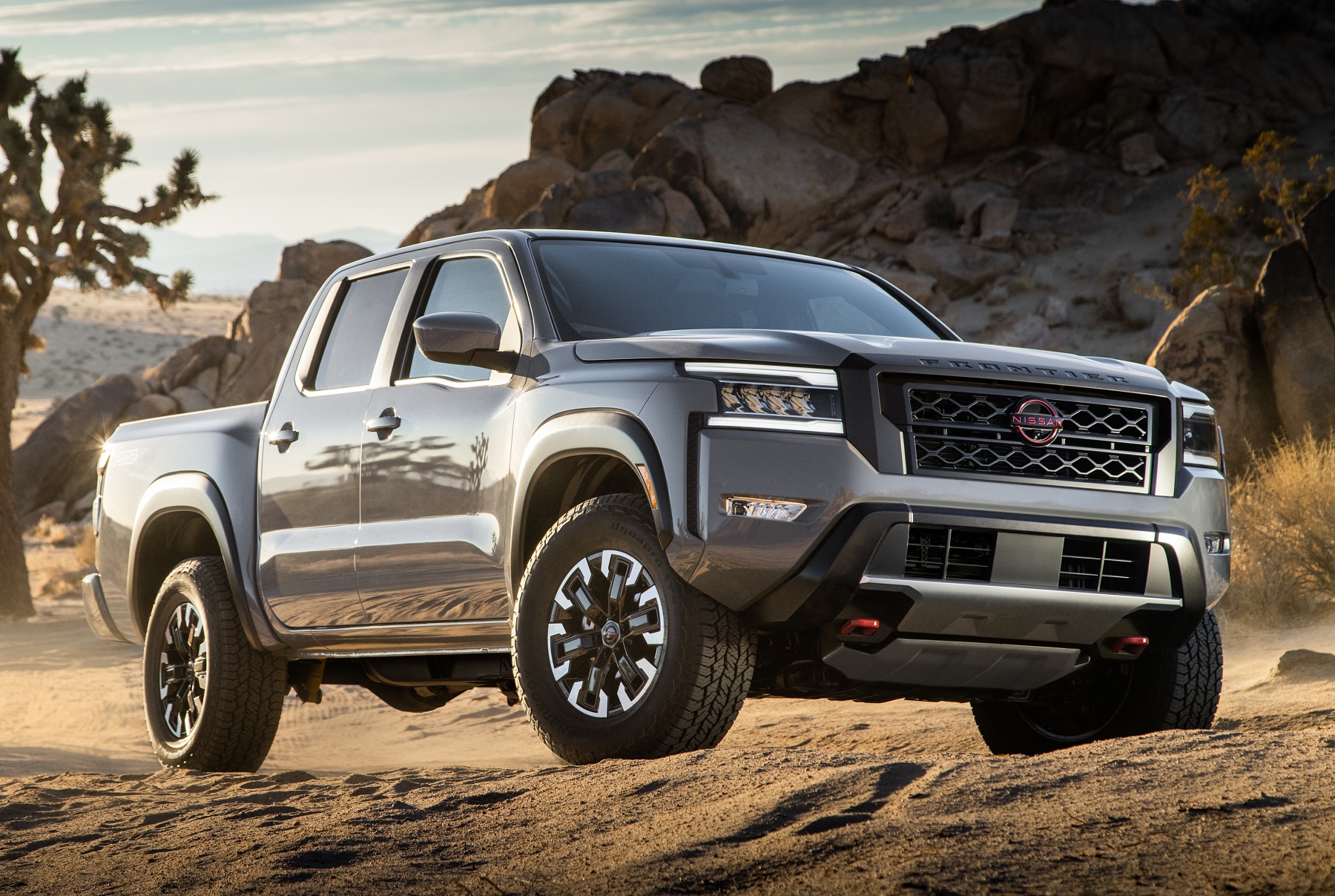 Nissan has been known for letting their models age rather extensively. The 370Z and GT-R are ones that often catch the most flak for being well over a decade old now, but it’s easy to forget that the Frontier exists. Despite it being nearly seventeen years old in its current form, they still managed to sell over 72,000 of them last year, possibly due to its new V6 upgrade. Likely to fleets, but still, not terrible numbers considering that it’s nearly two decades old. Imagine if the Ford Mustang was still built on the S197 chassis that came out in 2005. Now imagine that but in the single most competitive vehicle segment on earth and also a year older. That’s the Nissan Frontier. Until now.

Finally, the midsize pickup gets a revamp. A new generation Frontier is on the way with a modernized V6, fresh looks inside and out, and new tech and safety features. The 2022 Nissan Frontier will aim to be a “right-sized” pickup for those who want a truck for everything, such as a daily driver that could also be used for weekend adventures. It should offer a good range of capabilities without being a pain to park. You know, like a mid-size truck. 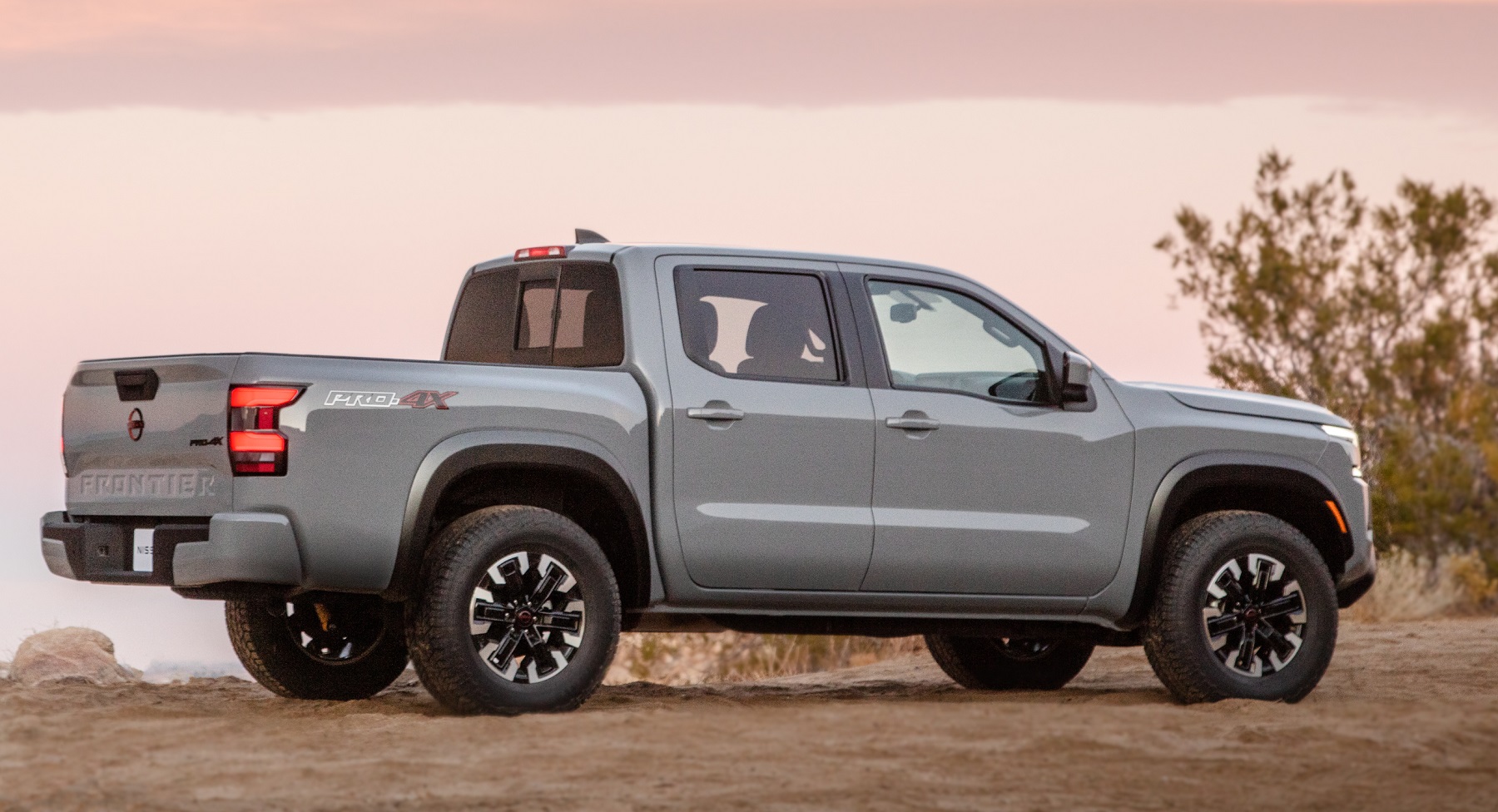 The design was one thing that showed its age the most on the old truck. Inside and out, the 2022 Frontier is all new and rugged-looking. Its exterior design “combines aggressive, modern style with elements inspired by the iconic Nissan Hardbody”. A big ole grille and its beefy-looking, off-road-inspired nose are prominent features, as are its new interlocking headlights. With its high eye-point and shoulder bodysides, the truck has an elevated and widened stance that should make it a prime candidate for brodozing on a budget. In the rear, more muscular fenders and lamps that appear to clamp to the body sides further beef up its look.

The old Frontier didn’t look bad at all… until you got inside. That’s been addressed with an all new “utility-centric” interior. The biggest difference is the addition of a central display that no longer looks like an old Garmin unit you found in the project car you bought off an elderly couple. This one is a 9″ touch screen which they say is the largest in its class. I’m too lazy and completely uninterested to independently verify that. It supports Apple CarPlay and Android Auto and is standard on all models. Even the gauge cluster is digital now as standard. Other interior highlights include tons of storage space (4.0 liters of center console storage), added insulation, and standard Zero Gravity seats which reduce long-range driving fatigue. 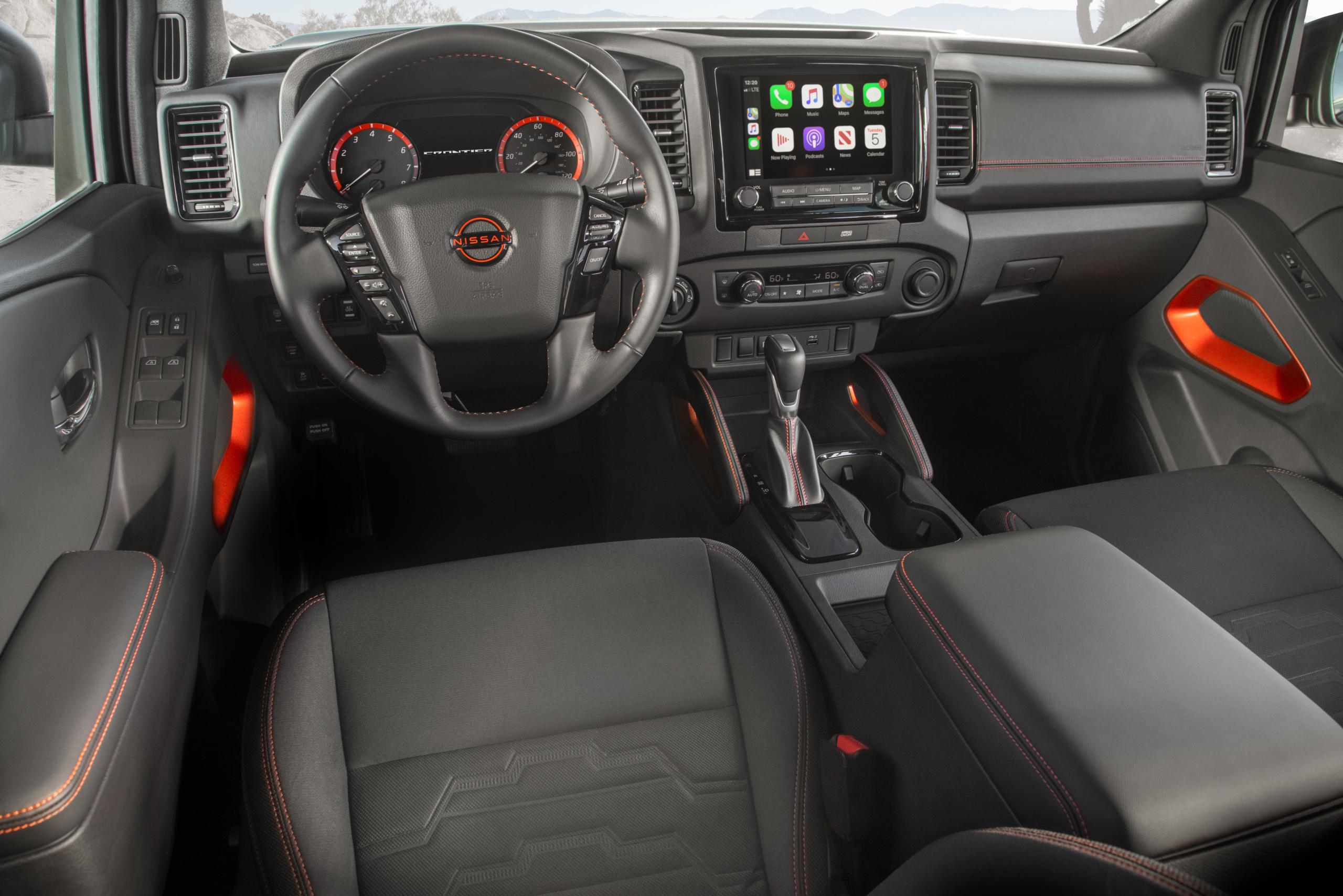 Power is provided by a standard 3.8-liter direct injection V6 engine. It was introduced last year in what was likely the single biggest update the last-gen Frontier ever got. Back then power was rated at 310 horsepower and 281 lb.-ft. of torque. It will be paired with a nine-speed automatic transmission which is designed for maximum efficiency and strong acceleration. It also has nearly twice the amount of gears as the outgoing transmission. RWD and 4WD is available on all models as is the option for a Crew or King cab. A 5-foot bed is standard on the Crew Cab models while the King Cab gets a 6-foot bed as standard. The longer bed is also available on certain Crew Cab models.

Frontier buyers will also have no shortage of Nissan and Nismo accessories to choose from. More than 85 will be available around the Frontier’s launch date. They range from off-road step rails, suspension lift kits, auxiliary lighting, ladder racks, tents, and tons more. The Frontier will be available starting this summer. Nissan has had a very long time to get this right and it seems that they just may have pulled it off. The new Nissan Frontier makes others in the midsize pickup segment look dated by comparison. Oh how the turn tables.

The Frontier isn’t the only ancient Nissan to get a new lease on life. The Pathfinder is a handsome new SUV with plenty of all terrain capabilities when optioned correctly. Because I’m terrible at managing time and spent way too long on the Cadillac and Frontier news, I’ll forward you to Jalopnik for the details on this one. 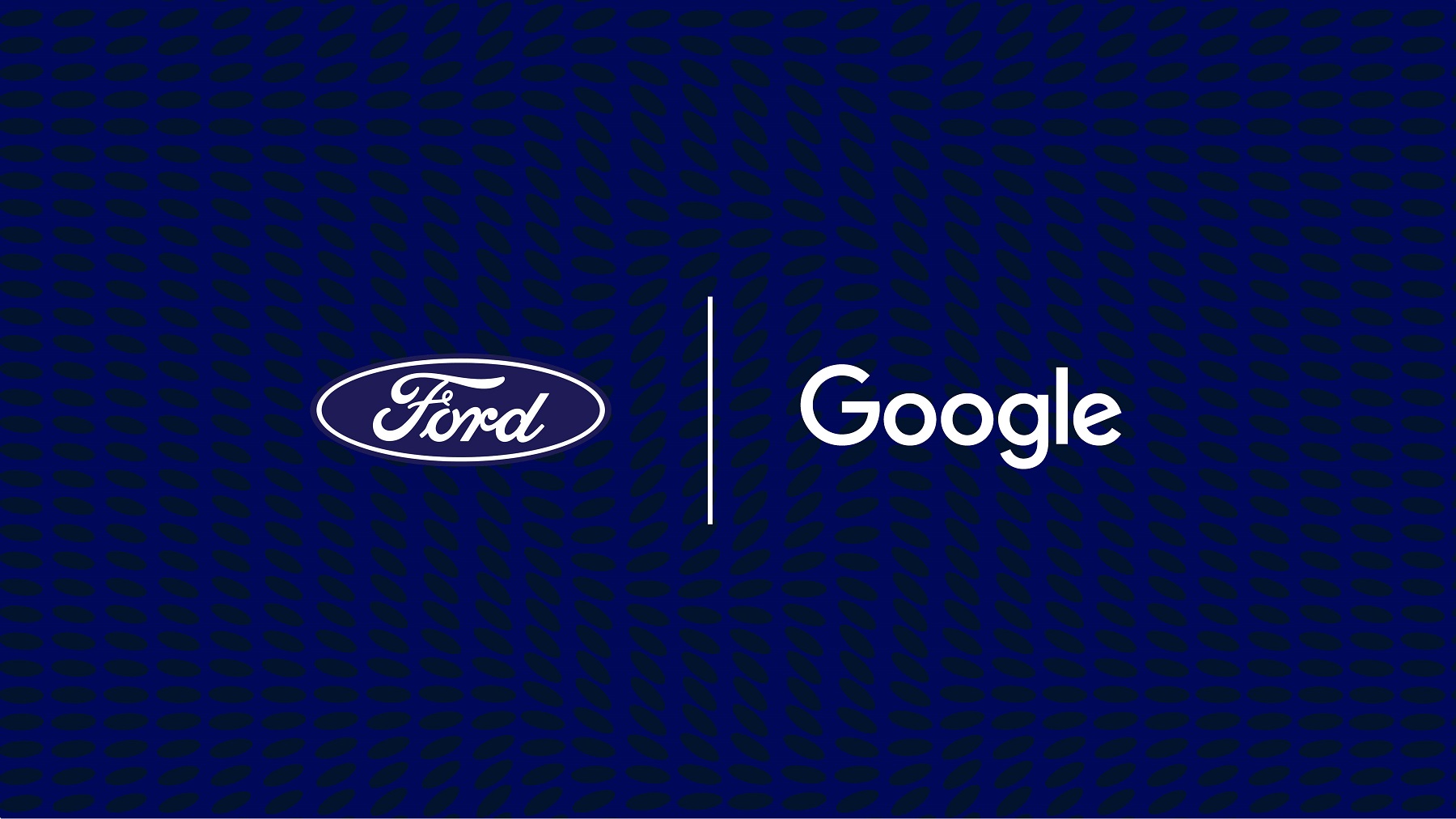 Ford made a big announcement this week along with Google. The two giants will be partnering to create unique services and capabilities for Ford and Lincoln customers. There’s a few key points that I’ll highlight but there’s a lot of potential implications for the future of Ford.

Ford named Google Cloud its preferred cloud provider, which means Ford will leverage Google’s omnipotence (their data), AI, and machine learning to accelerate their transformation as an electrified company with enhanced connected driving tech. This will have impacts on Ford’s development and manufacturing but also the end user experience. Drivers will have expanded convenience and service as well as a totally new in-car infotainment system.

Beginning in 2023, Ford will run on Android with every feature in the book. Google Assistant will be used for voice commands, Googel Maps will be the vehicle’s primary built-in navigation, Google Play will give drivers access to apps for music, podcasts, audiobooks, etc, and third party developers will have some access as well. An important note to answer a question I’m sure many of you have – this is only impacting the base user experience of the car (replaces Sync) and Android Auto and Apple CarPlay will still be supported.

This is a big step for Ford. Sync has made some major improvements but it’s still not what I’d call the best on the market. Sync 3 in my Mustang is just a bit too slow to respond and could use a few more features. So who else is better to overhaul a user interface than a company that dominates mobile market share.

Other coverage from the week