Welcome to the Hooniverse News! As always, this is a weekly recap of the biggest stories in the automotive industry without the fluff or bull. This week, it’s kind of a light one with PSA and FCA moving forward with their merger, Porsche unveiling a facelifted Macan GTS, and Ford honoring the original GT350 with a new heritage edition Mustang.

A merger between PSA Group and Fiat Chrysler Automobiles has become binding with signatures from both parties. Autoweek reports that 50-50 terms were agreed to and that PSA CEO Carlos Tavares will lead what is now the fourth-largest automaker in the world. The board will be made up of 5 suits from PSA and FCA each plus Tavares

The whole process is expected to take 12-15 months as company shareholders and regulatory bodies must also approve of the merger. During that time, PSA and FCA will come up with a new name for themselves. They’ll also have to come up with a gameplan for a future of building cars together, because PSA’s and FCA’s offerings couldn’t be any more different. We can get an idea of what the future holds by looking at what each party stands to benefit from, which Automotive News reaffirms for us: PSA gets access to FCA’s dealer network in North America (potentially huge for the Peugeot’s planned return to the US) and FCA gets more low-emissions technology and new platforms.

There’s still a lot to be discussed and decided on of course, like what’s going to happen with all the excess capacity and the combined workforce of nearly 400,000 across the world. Company estimates of a $4 billion per year savings after the merger would happen even without any plant closures, but I would expect there to be some tough decisions coming ahead. I’ll stick with this story as long as something cooler doesn’t happen that week and I lose concentration.

Remember the new Porsche Macan? It got a bit of a facelift a while back and with that comes all the usual models that are brought up to the new specification. The latest is the GTS version for the 2020 Macan, the sportiest of the Macan models. Compared to the outgoing Macan GTS, it boasts better numbers and should be a better all-around performer.

The 2.9-liter twin-turbocharged V6 gains 20 horsepower for a new grand total of 375 hp with 384 lb.-ft. of torque. It’s still paired with Porsche’s superior PDK dual-clutch gearbox, but this one is “newly adapted” and allows for an even quicker 0-62 mph time of 4.7 seconds (three tenths up from before). Another thing that got reworked a bit is the Porsche Active Suspension Management which promises greater control and handling characteristics. It also rides 15mm lower and can be lowered an additional 10mm with optional air suspension. Braking is also improved with “generously sized” brakes that are available as cast iron, tungsten carbide-coated, or ceramic composite. There was other stuff they changed too but I found none of it interesting.

Ford is paying tribute to the original 1965 Mustang Shelby GT350 with a limited run of Heritage Edition GT350s next year. This special edition Shelby wears the same Wimbledon White with Guardsman Blue striping that was made famous by the Mustang’s early success in motorsport as a tribute to one of the most important chapters in Mustang history.

The GT350’s first win came on February 14th, 1965 at Green Valley Raceway at the hands of Ken Miles. Someone at Ford must’ve seen Ford v. Ferrari because that’s the first time I can recall seeing him recognized in a Ford press release. Anyways, the high-performance Mustang developed by Carroll Shelby and Ken Miles has been an icon and a highlight of the Mustang’s lifespan and was an obvious choice for Ford to bring back in 2015 to showcase the best of what the new S550 platform could do. And now that famous color scheme that those original cars wore to victory lane is finally available again, exclusively on the GT350 and GT350R. 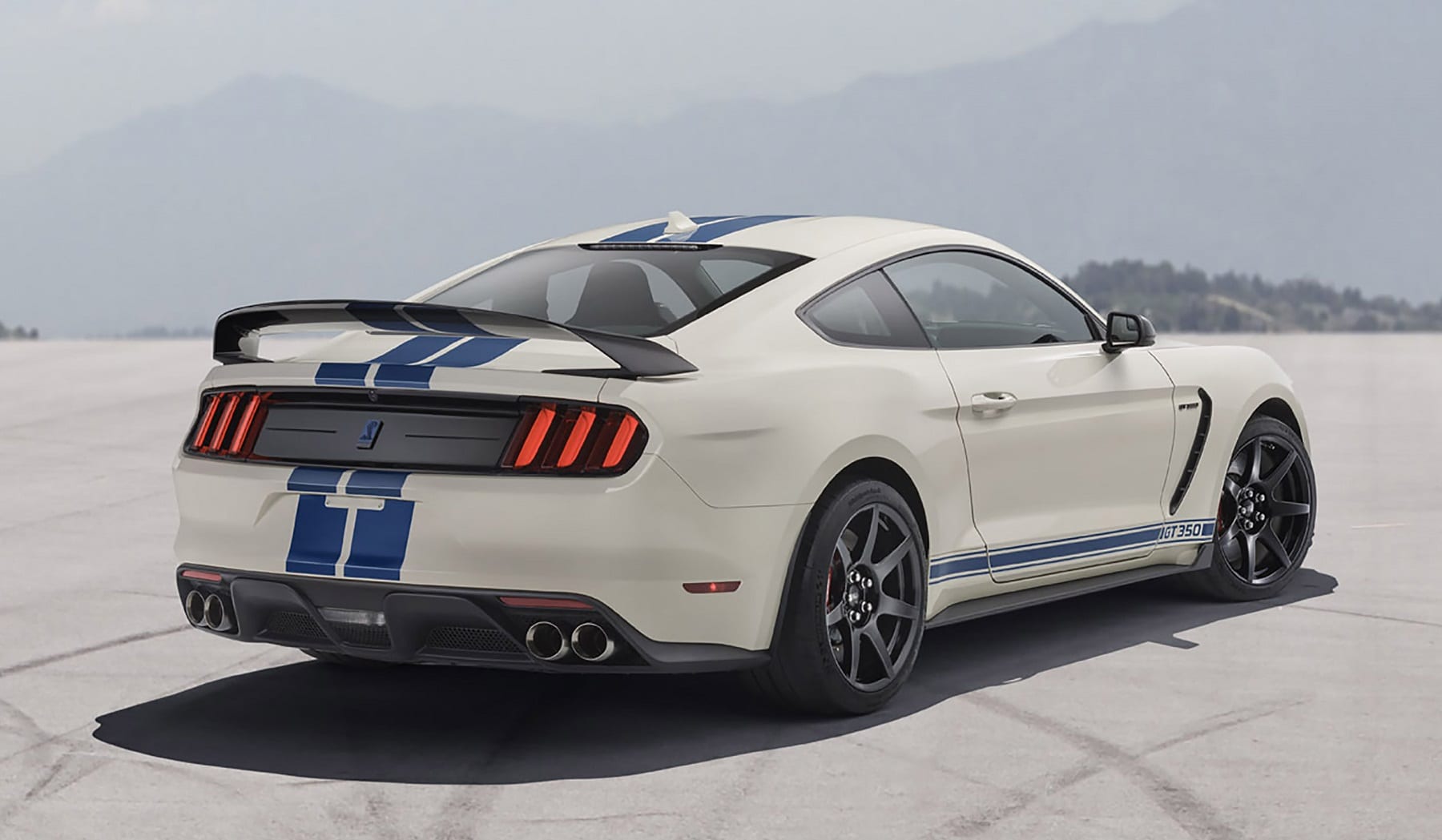 Ford did not specify how many of these would be offered, but they did confirm the price as a $1,965 option. For a special edition anything from the Big Three, that’s cheap. For what’s basically a paint package, that’s… actually not bad either. There are worse ways to add $1,965 in the options list. The cars are scheduled to be built and shipped this spring so dealers are taking orders now. Good luck avoiding markups.