Welcome to the Hooniverse News! As always, this is a weekly recap of the biggest stories in the automotive industry without the fluff or bull. This week: Ford celebrates an underrated victory with a heritage edition GT, Ford also adds more ways to spec your GT with Studio Collection, Mercedes-AMG shows off their Project ONE undergoing track testing, Aston Martin does the 007 thing again, BMW unleashes the M4’s face unto the world because 2020 wasn’t bad enough yet, Jeep teases a new Wagoneer ahead of its September debut, RAM does the Hellcat thing, plus your news for the week.

One would think Ford’s run of Heritage Edition GTs would have ended last year when the fourth and final 24 Hours of Le Mans-winning design debuted. However, Ford’s hand built supercar is extending into the 2022 model year and those four Le Mans victories weren’t the only accomplishments of the original GT40. So for 2021, an easily forgotten and often uncelebrated victory gets its own Heritage Edition.

The 2021 Ford GT Heritage Edition celebrates the GT40’s first 24 hour endurance win which came at the 1966 Daytona 24 Hour Continental race. Ken Miles and Lloyd Ruby led almost every lap of the race and brought two other GT40 MkIIs with them for a podium sweep. It was the first time Ferrari’s sports car dominance was threatened, and they’d do it again at Sebring and of course Le Mans that same year. The livery on that number 98 GT40 was simple but beautiful, and it gets recreated with a slightly modern twist 55 years later (by the time the car comes out). 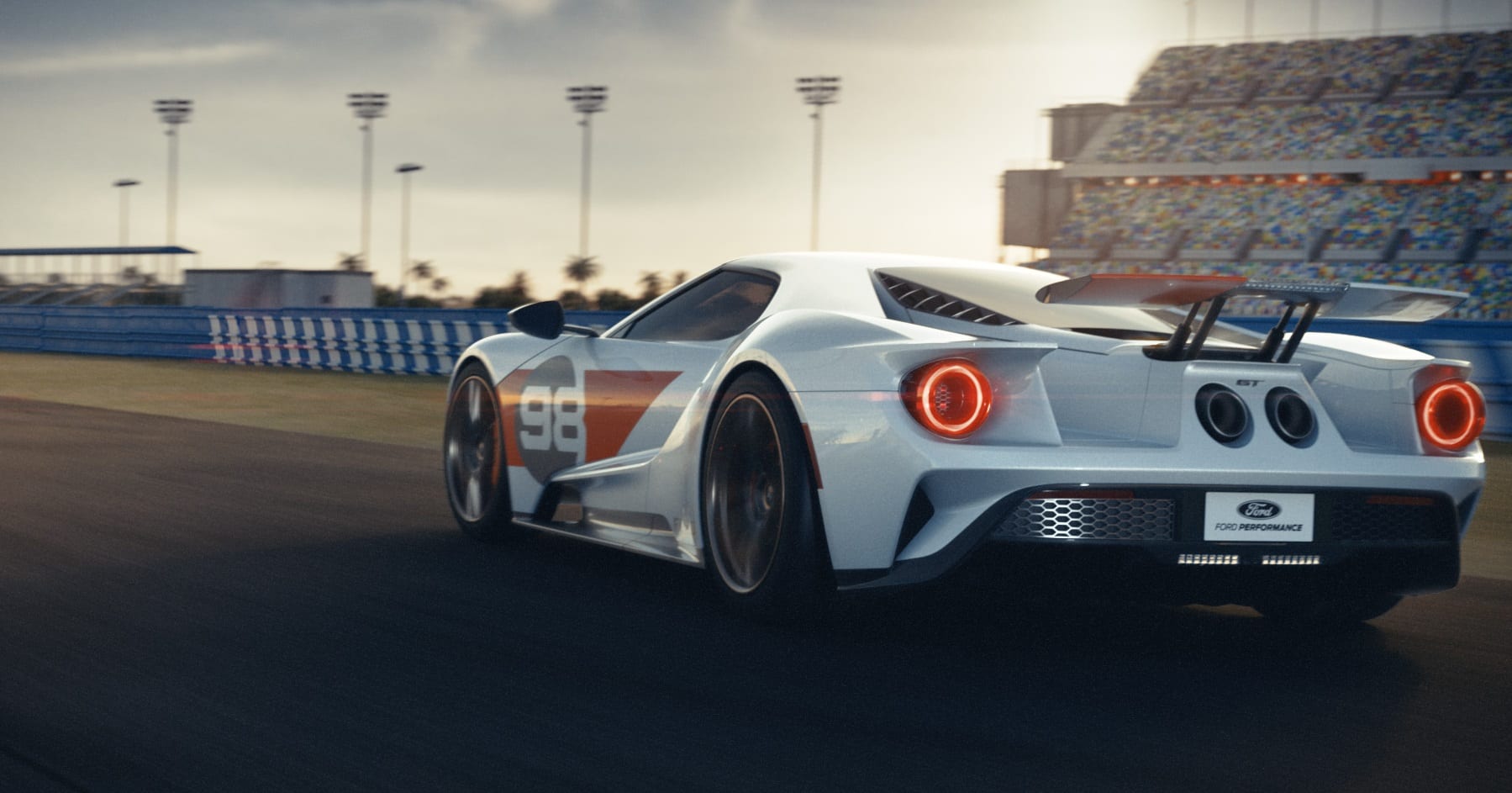 Ford recreates that livery with Frozen White paint with an exposed carbon fiber hood. Asymmetrical Race Red accents on the front fascia and roof edge, driver’s side door, and underneath the rear wing add contrast and mimic the original livery with a few small changes. The 98 roundel graphic is created with exposed carbon fiber. Capping off the look is a set of one-piece Heritage Gold 20-inch forged-aluminum wheels paired with red lacquered Brembo monoblock brake calipers. The interior features loads of black Alcantara while the sports seats and paddle shifters are a contrasting red. Buyers can also get a ghosted number 98 on the interior door panel. 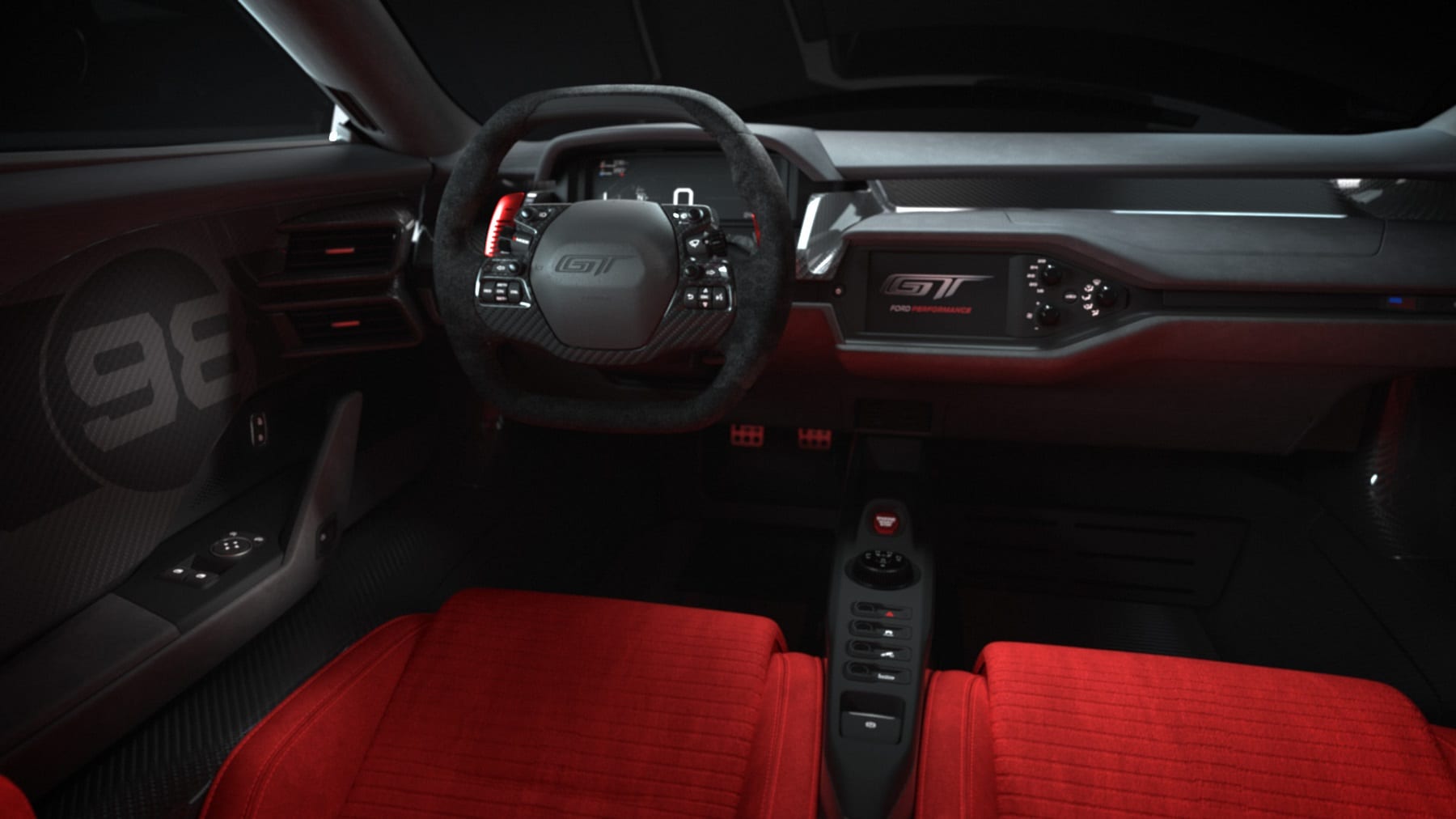 Of the now five Heritage Edition GTs Ford has produced, I think this one is easily the prettiest so far. It’s also great to see this significant victory finally get some recognition from Ford themselves. It was featured prominently in Ford v Ferrari at least, but seeing Ford themselves do this is great. Too bad they’ll only ever be seen at Barrett-Jackson auctions.

In addition to the Heritage Edition, Ford is introducing another limited edition thing for rich people to spend their money on. Only 40 of the remaining 2021-2022 GTs will be a “Studio Collection” GT, which as far as I can tell is a color and graphics package. Ford offers some additional colors, like Minecraft streamer green (pictured), but I suppose the main draw is the additional graphics you can get on them.

One set features stripes that appear to mimic the Heritage Edition race cars Ford raced last year to commemorate their four Le Mans wins (shown on the right) and the other is something totally new and very pretty. Ford and Multimatic, the ones manufacturing the GT, collaborated on this Studio Edition GT and will offer a wide range of customization to the 40 people who buy in to the program.

Not much has been heard about Mercedes-AMG’s extremely ambitious hypercar lately, the Project ONE. The last I remember hearing about it was that they were having troubles meeting emissions requirements with what was essentially the engine out of their dominant F1 car that was being tuned for street use. But after a long period of silence, we’ve been given a glimpse into where they’re currently at with it.

According to the video, the final powertrain is in the car and running at its full four-digit power output – and it surprisingly sounds great, better than the current F1 cars I’d say. They’ve also got the active aero elements fully functional as well. They’re spending a lot of time on track with multiple cars to get some additional fine tuning in and probably some endurance testing too. A stop at the Nürburgring is also in its near future. They have a few months to go before the track closes for the winter, so I wouldn’t be surprised if we see a new record before winter.

Aston Martin does the 007 thing again 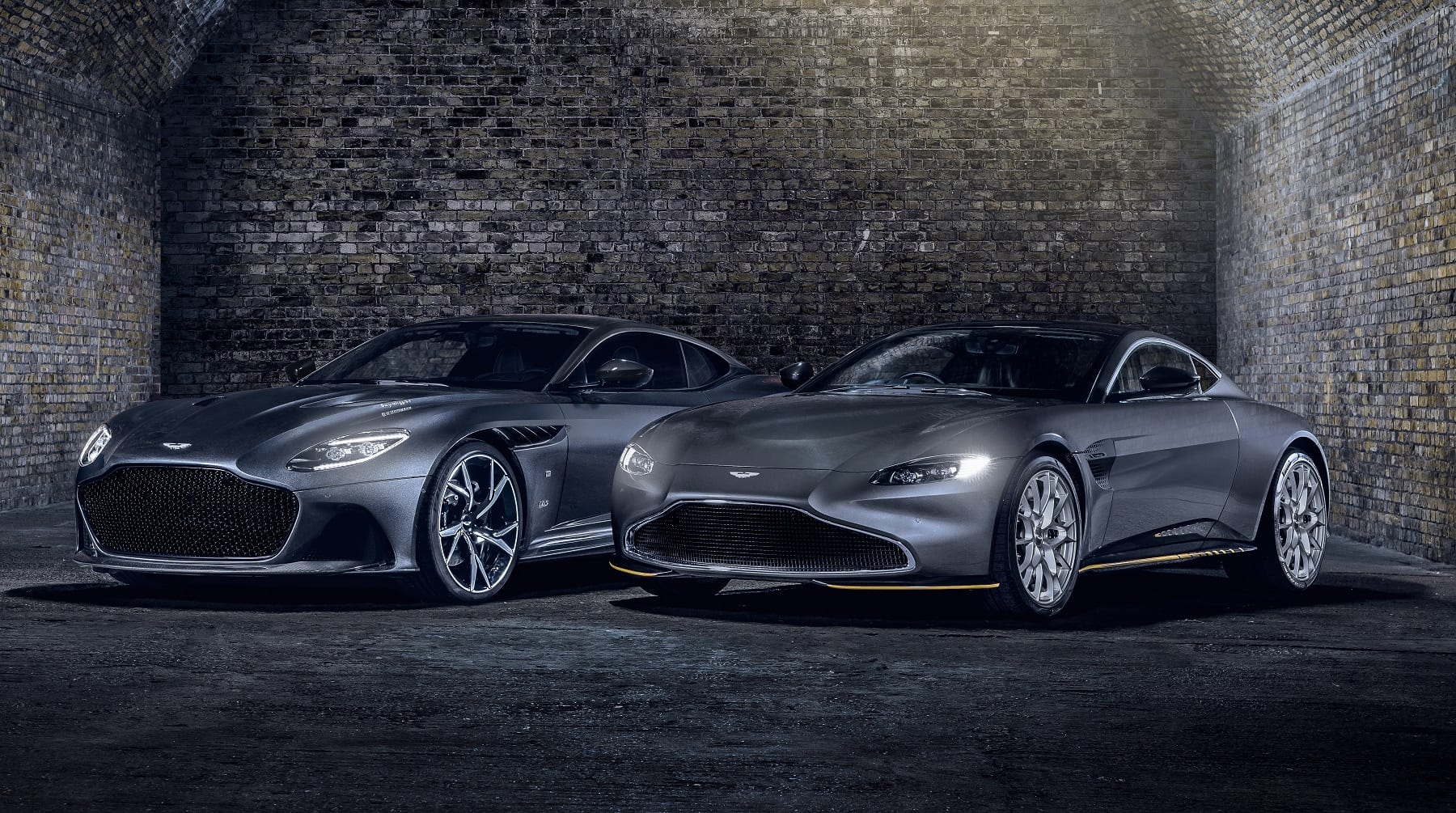 This may some as a surprise, but Aston Martin is working with the 007 film franchise again. The 25th Bond film, No Time to Die, is due in theaters whenever we can go to those again and will apparently feature some Aston Martins in the film I guess. Ugh, I hate blatant product placement in films.

It being a milestone Bond film though means Aston Martin wasn’t happy with just one edition – they’ve got two. The first is the Aston Martin V8 Vantage which pays homage to the Aston Martin V8 from The Living Daylights (1987), but will still play a role in the new film. The V8 is painted in authentic Cumberland Grey and is winterised with optional limited edition skis and a rack to go with it. This one is limited to 100 units globally.

Meanwhile the breathtakingly beautiful DBS Superleggera will also be immortalized in the movie and thus gets a special edition too. Restricted to 25 units globally, it too is done to the exact specification that we’ll see in the movie. It wears special Ceramic Grey exterior paint with the roof, mirror caps, splitter, diffuser, and rear Aeroblade featured in black tinted carbon fibre. It rolls on Gloss Black diamond-turned Y-Spoke 21” wheels. This special edition also features a 007 fender badge, finished in chrome with a black enamel infill and Stainless Steel Silver 007 foil applied to the rear spoiler blade.

Interestingly though, Aston Martin claims the two cars above aren’t the only new cars to make an appearance in the movie. They say the Valhalla, their upcoming mid-engine hypercar, will also be in the movie. So that’ll be cool. That also means we’re gonna get some kind of 007 Edition Valhalla in the future.

Weeks after BMW’s first teaser of the M4 GT3 confirmed they were doing on-track testing with a functional prototype, they’ve given us another look at their progress while also confirming what we were all expecting. The BMW M4 GT3 and by extension the M4 street car as well will be ugly as shit.

While testing at the Red Bull Ring, BMW brought out the road car prototype to play with the race car as well. While it’s very cool to see road and race cars testing side-by-side on the same track, which BMW also did with the M8 and the M8 GTE, what isn’t cool is the nose. They first showed an awful attempt at doing a modern take on the classic tall and narrow grilles from BMW history on the 4 Series. Then leaked photos showed an even worse version on the M3 and M4. Now it’s been confirmed from BMW themselves. Unless BMW has a change of heart, they’re about to dominate GT3 because none of the other competitors will want that thing filling up their mirrors. 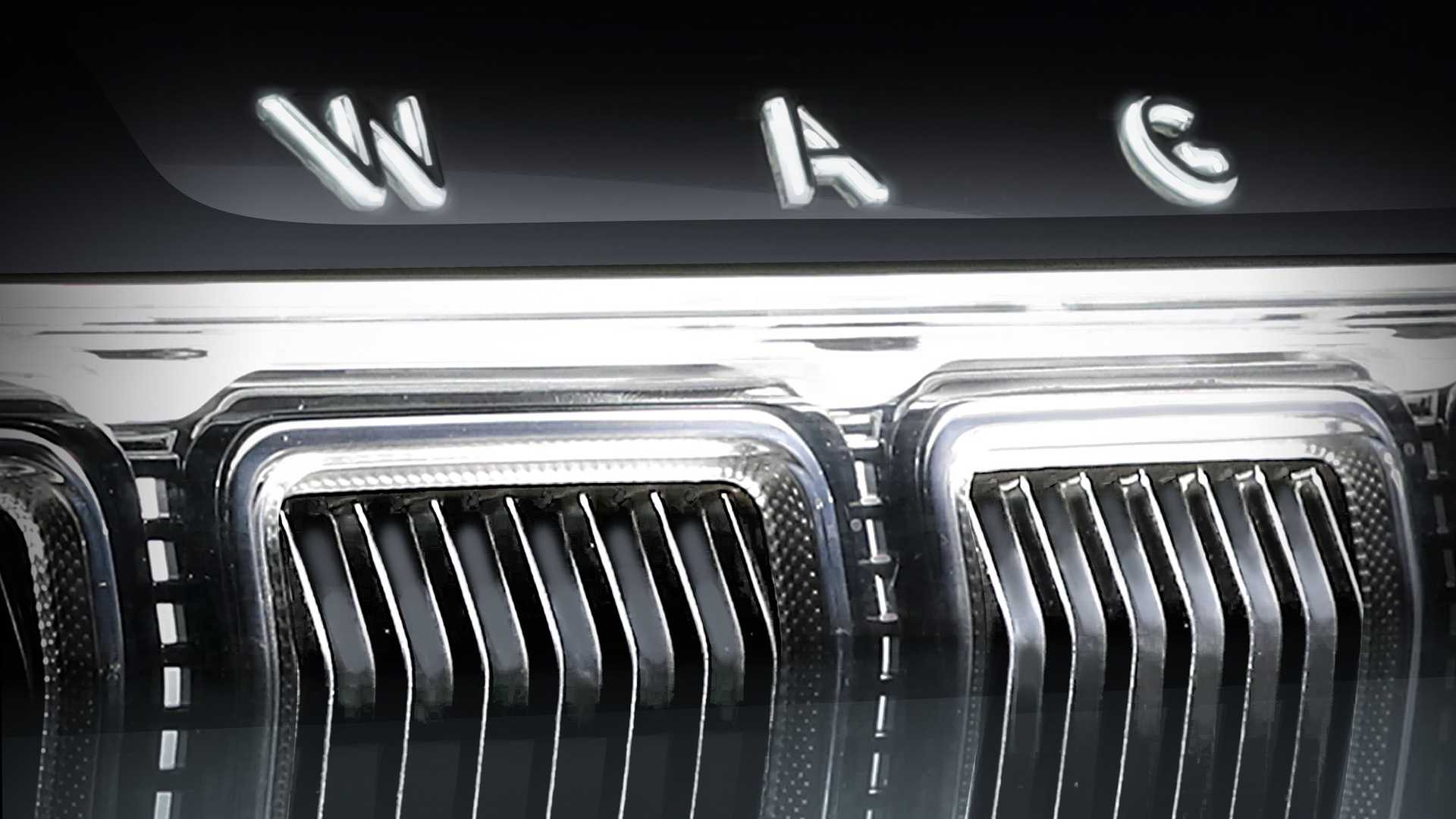 THIS IS NOT A DRILL.

Jeep has dropped a few teasers this week of what is presumably the 2022 Wagoneer/Grand Wagoneer. Or it’ll be a new dog-friendly model called the Wag. All we know is it’s coming September 3rd. And I’m kind of excited even though rumors indicate it’ll be a more luxury-oriented SUV and thus be prohibitively expensive. But we’ll see what happens on September 3rd.

RAM does the Hellcat thing 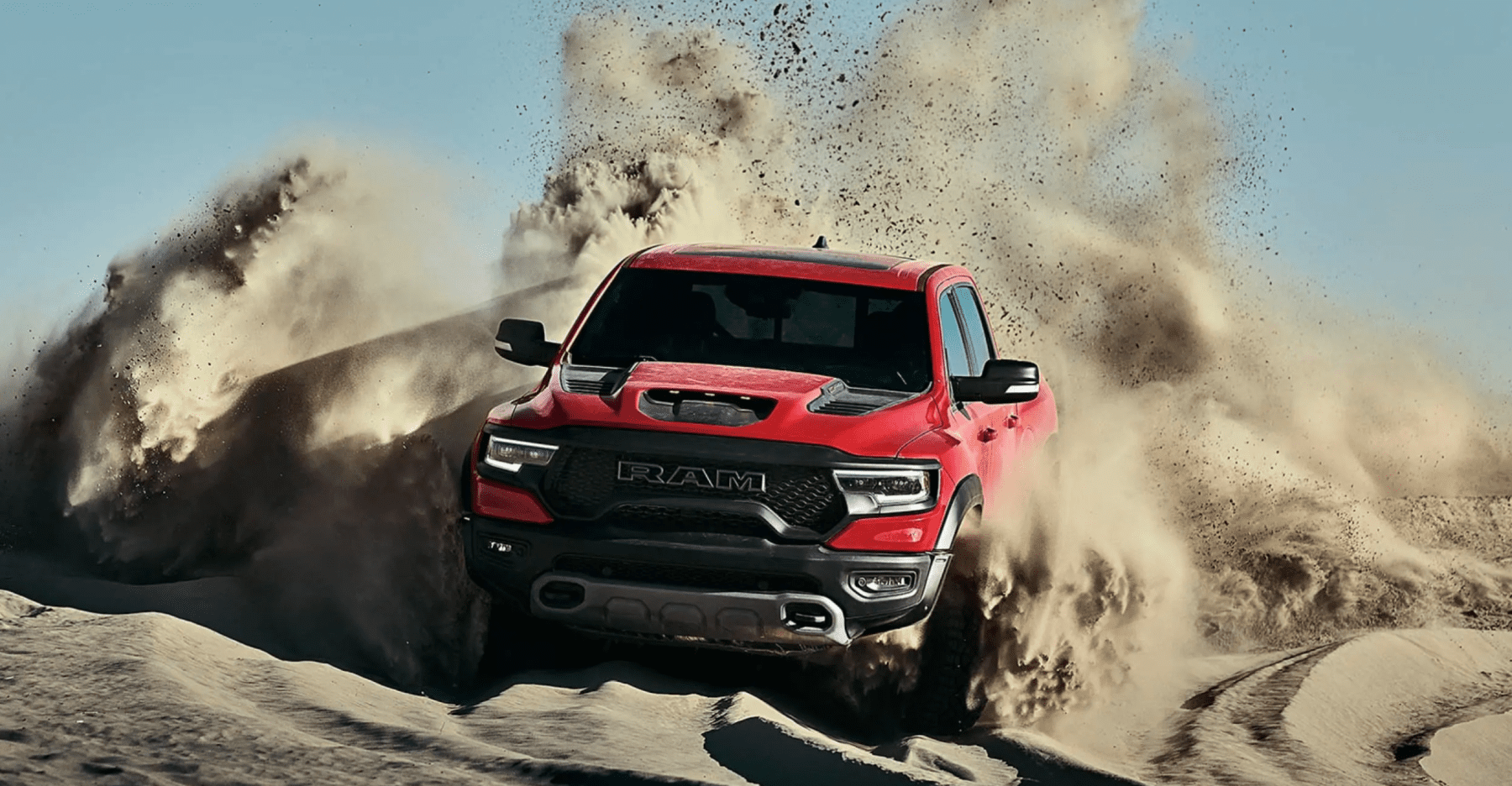 The MOPAR solution of just putting big ass engines in everything has once again made its way into the RAM, but this time it’s the most powerful one yet. The 2021 RAm 1500 TRX is a literal Hellcat-powered pickup with an offroad focus. It looks like a good time even if it looks a bit out of place in today’s automotive landscape. You can read up on it here if you haven’t already.