Welcome to the Hooniverse News! As always, this is a weekly recap of the biggest stories in the automotive industry without the fluff or bull. This week, Acura stuns with the Type S Concept, Shelby GT500 tech starts sharing hardware with the GT350R, Dodge celebrates 50 years of the Charger Daytona, Ford adds FX2 off-road package for the Ranger, and Chevrolet reveals official pricing for the C8 Corvette. 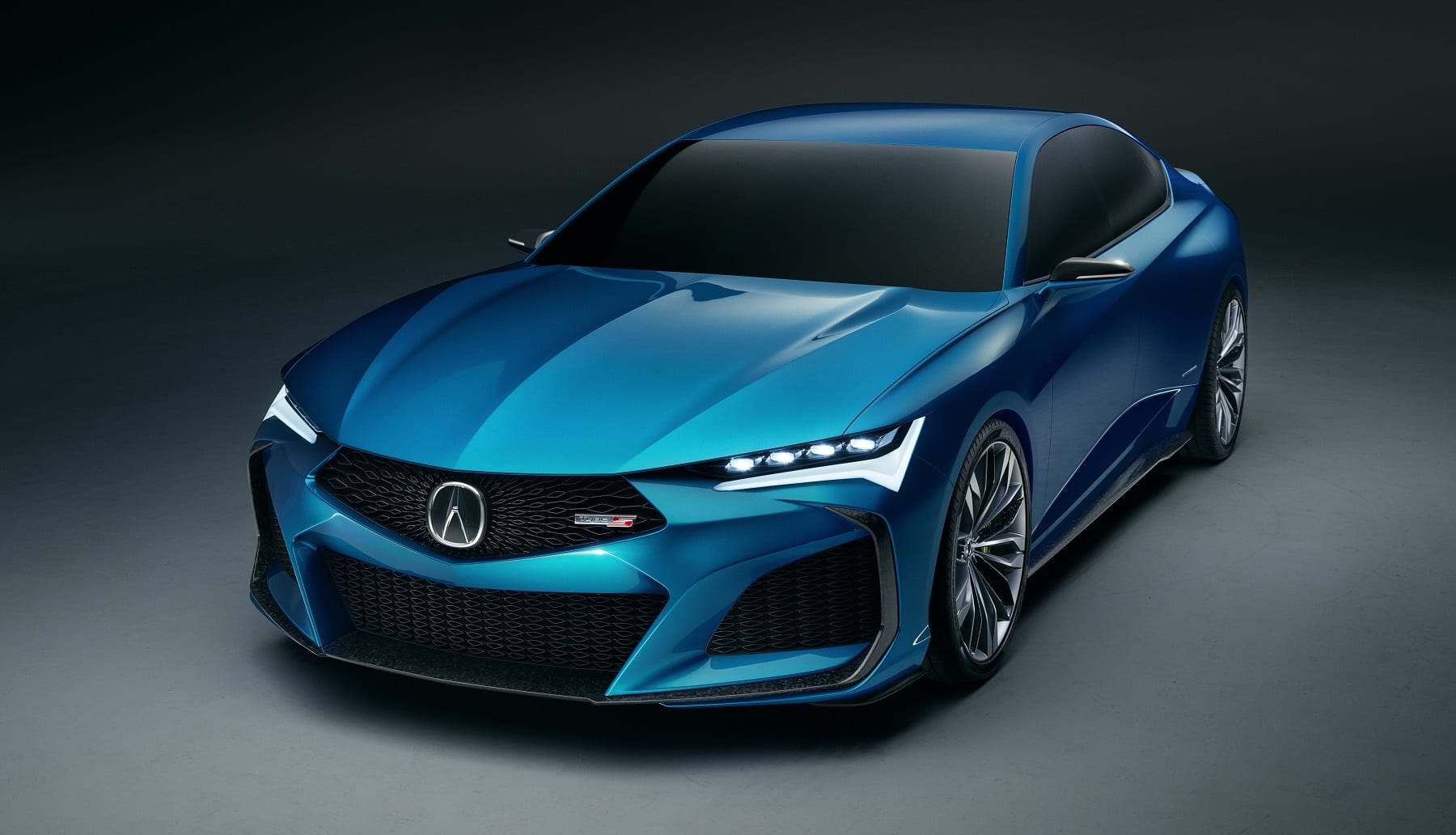 As promised, Acura took the covers off a concept that will help usher in a new era of Acura performance. And it’s stunning. Making its public debut at The Quail, a Motorsports Gathering (which I have to say is still one of the dumbest names for a car show I’ve ever heard) today is the Acura Type S Concept, a design study that will set the stage for the return of the Type S and heavily influence the character of future production models bearing the name.

The Acura design team set out to express the essence of “Precision Crafted Performance“, which has been the brand’s tagline since the 2nd-generation NSX was introduced. They did that through the car’s stance, proportions, and a silhouette that is “powerful and expressive, yet clean and cohesive”. It has the sports car essentials like a wide track, low stance, a long hood, and short overhangs. The concept introduces two reworked design traits from Acura’s current lineup, those being the Diamond Pentagon grille with a new intricate pattern and next-gen four-lamp “Jewel Eye” LED headlights. Some of the details go beyond sports cars though, like the “chicane” daytime running lights and taillights which were influenced by the ARX-05 Daytona Prototype car that’s currently one of the top players in IMSA. 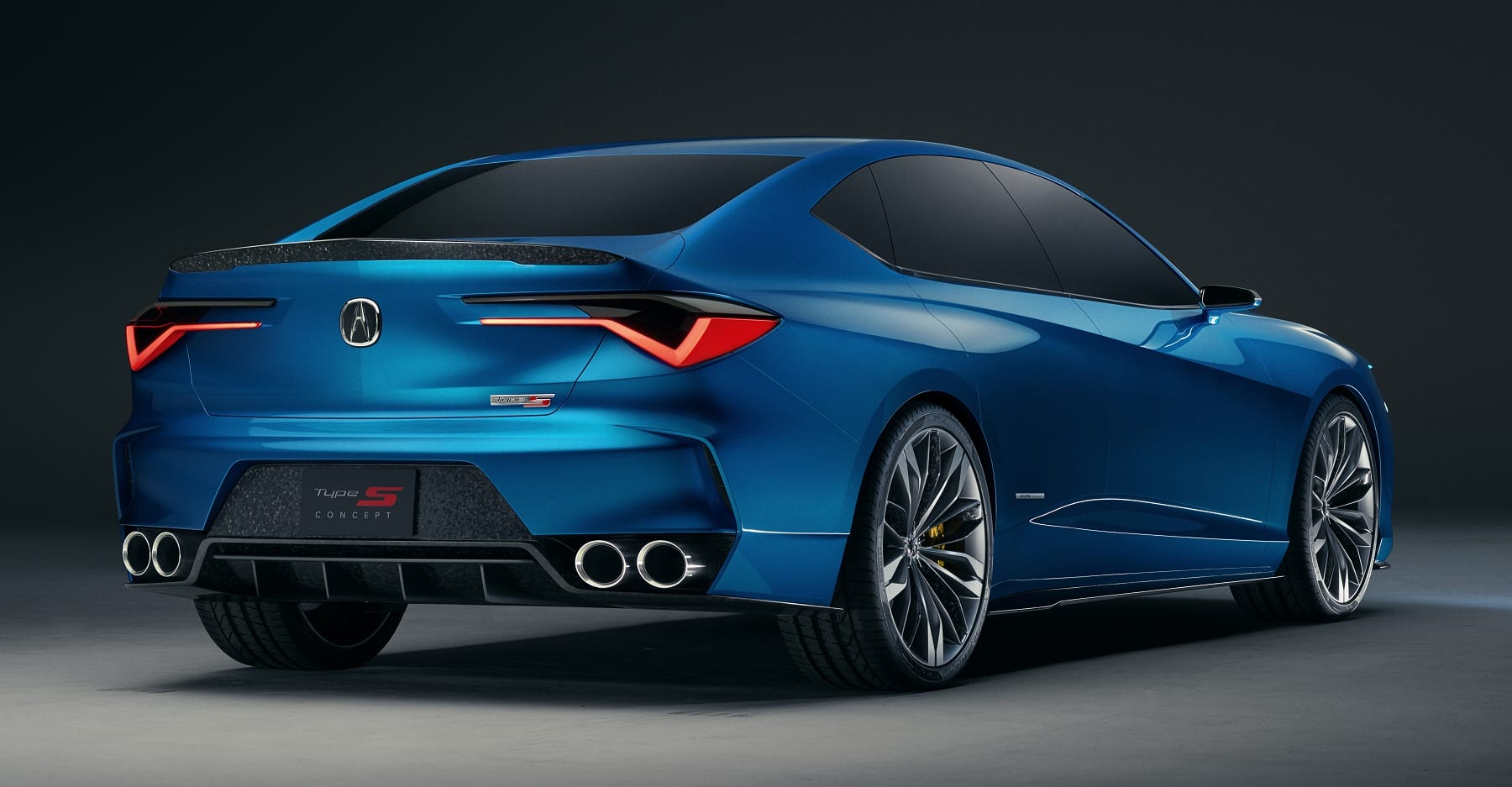 The styling of the front fascia is aggressive and outrageously beautiful but also functional. Large air intakes would be sized appropriately for routing air to “a high-performance engine” (no details were given) and Brembo brake package. At the business end is an upswept decklid with a sharply creased centerline drawn from the hood, an integrated forged carbon spoiler, rear diffuser, and chrome quad-tip exhaust. The 21″ multi-spoke wheels wear high-performance summer tires in a square 285 setup which would be ideal for handling on and off the track.

There’s really no sure indication as to whether we’ll see this car in production, but they have promised that two Acuras will debut with the Type S badge in the next two years with heavy influences from this thing. Those cars should be a TLX and NSX (if they don’t want to call it a Type R instead). They will most likely just be the RDX and MDX because the wrong suits will get involved.

The GT500 isn’t the only Shelby getting love as we roll into the 2020 model year. The wonderful Shelby GT350R is getting a few tweaks to enhance its driving characteristics even more, and it’s done so using a few things from the GT500 itself. Ford says this won’t be the last time that lessons learned from the GT500 trickle down into other parts of the Mustang lineup.

The GT350R’s 2020 refinements start with new front suspension geometry with a redesigned high-trail steering knuckle taken from the GT500. Expect better front end bite and responsiveness out of that. Ford also swapped in a new steering rack and recalibrated electric power steering for greater steering precision. That’s it for the new hardware – a short list but with big improvements. 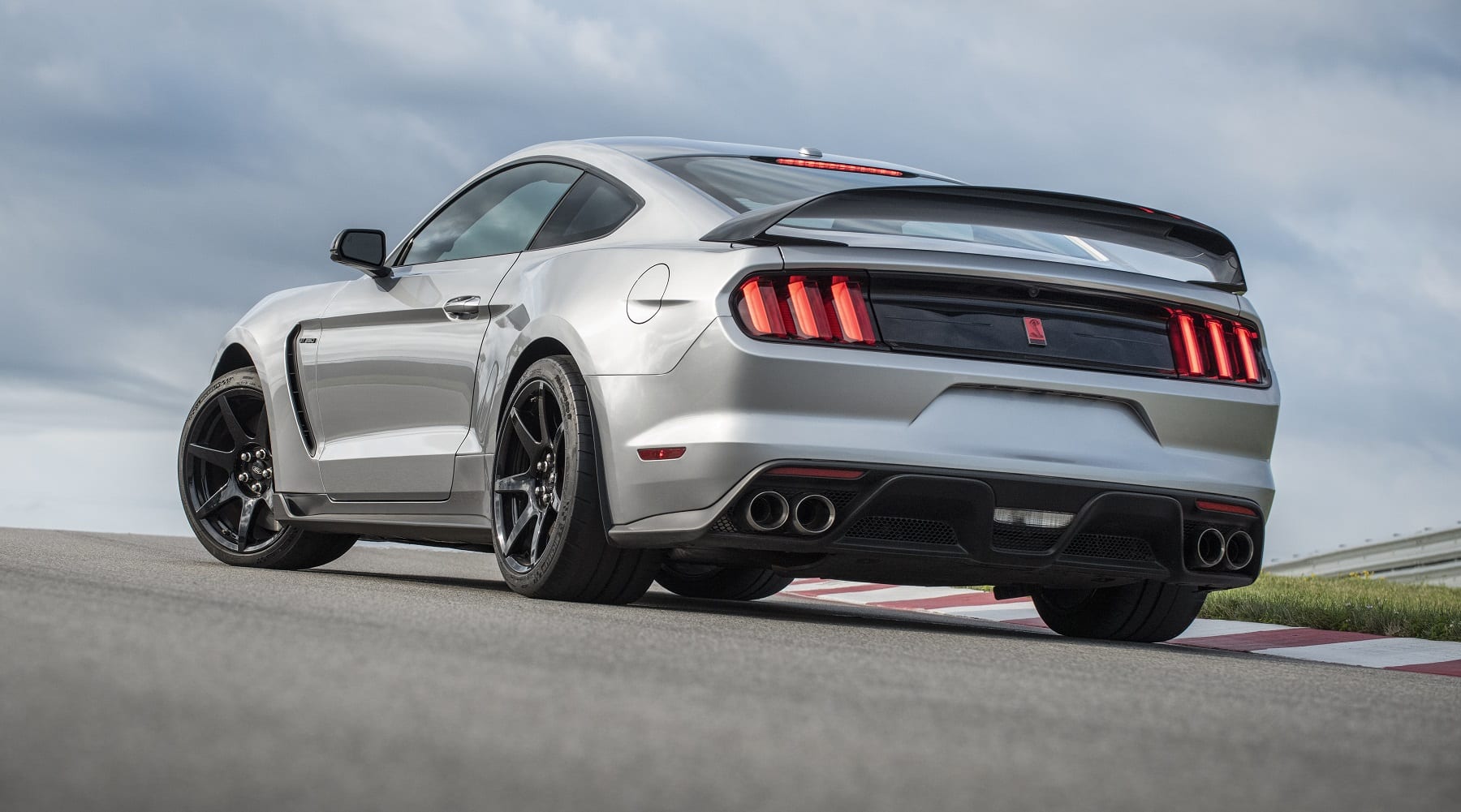 Meanwhile, some new paint colors from the GT500 also get added to both GT350s – Grabber Lime, Twister Orange, Iconic Silver, and Red Hot Metallic. One thing that hasn’t changed is how awesome the GT350 lineup is.

Meanwhile, at the Woodward Dream Cruise, Dodge revealed another price gouging opportunity for dealerships. It’s the Charger SRT Hellcat Widebody Daytona 50th Anniversary Edition, which is one of those names that tells you everything there is to know about it right up front. It’s a Charger SRT Hellcat Widebody. It celebrates 50 years of the Charger Daytona which was a groundbreaking moment for Dodge, being the first car to break 200 mph average lap speed at Daytona. And it has the words Anniversary Edition at the end, so the dealer markups just shot up about 15%. On top of that only 501 examples are being built (just like the original Charger Daytona) so that means dealer markups are now approximately 50%. It goes on sale in the fall. 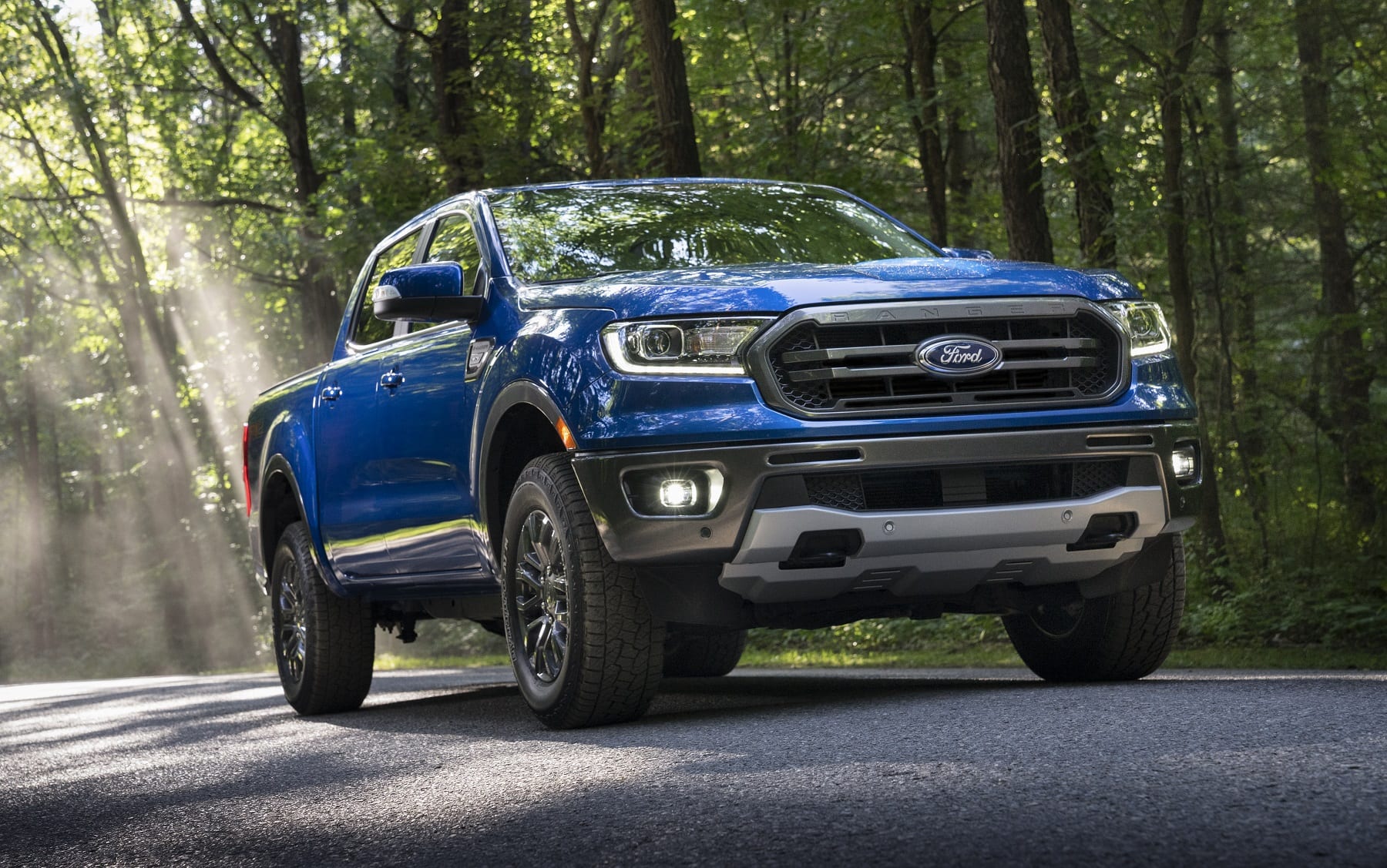 Ford is adding another off road trim level to the revived Ranger later this year. Based on the popular FX4 package, it gets an FX2 package for those who want some extra off road capability in a rear-wheel-drive Ranger for those who don’t need 4WD to have fun off the pavement.

The FX2 package rides on 17″ or 18″ wheels with off road tires and off-road tuned suspension which helps it adapt to whatever terrain you have the guts to throw at it. It also rocks a front underbody guard and air dam-delete for extra protection and approach angle clearance. Crucially, there’s also an electronic-locking rear differential and an off-road gauge cluster screen with pitch, roll, and yaw data shown in real time.

As if Ford needed to justify adding another off road package for truck buyers to throw money at, they claim one in every three Rangers is equipped with the FX4 package. By adding an off-road-ready package with a more common drivetrain and a bit of a price difference ($595 as opposed to $1,295 for the FX4), Ford is expecting to tap into even more buyers.

Meanwhile, Hooniverse anticipates that nine out of ten Ranger FX2 buyers will be looking for aftermarket FX4 stickers.

When Chevrolet was wrapping up their live debut of the all-new C8 Corvette a few weeks ago, one of their suits stood up on stage and claimed that the new mid-engine sports car would start under $60,000. Assumptions were made almost immediately that it would start at $59,999. “Don’t be silly”, Chevrolet execs must have said. “We’re not gonna sell it for $59,999….”

That is the official starting price of the base C8 Corvette and that includes destination charges. The Corvette at that price range is the 1LT trim level which includes the basics – 490-horsepower V8, 8-speed dual clutch, and other tech features. It’ll fit the bill for most casual buyers, as demonstrated by their choice of tires – all season run flats. The next trim levels add more luxury and tech, like the nose lift system which stores locations for automatic activation which can only be had on the 2LT and 3LT trims. Those start at $67,295 and $71,945 respectively.

Then there’s the package we would all want. The Z51 performance package (pictured). That adds 5 horsepower, performance exhaust, performance suspension, electronic performance limited slip differential, performance front and rear spoilers, boosted performance brakes, Michelin Pilot Sport 4S performance summer tires, and extra performance cooling for all that performance is a $5,000 option and can be had on any trim level. So at a minimum, buyers looking for more performance out of their Corvette will be spending at least $64,995 for a 1LT Z51. Any more money would just make you more comfortable… until the Z06 arrives.

I know a lot of people are excited about this car and its price. But if you want some advice, just wait a little bit. Once the first production C8 sells at Barrett-Jackson to a Hawaiian shirt enthusiast and all the dealerships have sold their first allotments for $200,000 because they’re assholes who want to ruin things for everyone so their manager can get a bonus, maybe then you’ll have a chance to buy a C8 for its true MSRP. And if you still can’t, we start an uprising.