Welcome to the Hooniverse News! As always, this is a weekly recap of the biggest stories in the automotive industry without the fluff or bull. This week: Audi debuts refreshed and more powerful S3, Mazda breaks our hearts by cancelling their TCR car, Hyperion shows off hydrogen power with ridiculous XP-1, BMW confirms an M3 Touring is coming even though it will probably be ugly as shit, and a next-gen Toyobaru 86/BRZ was spied testing. 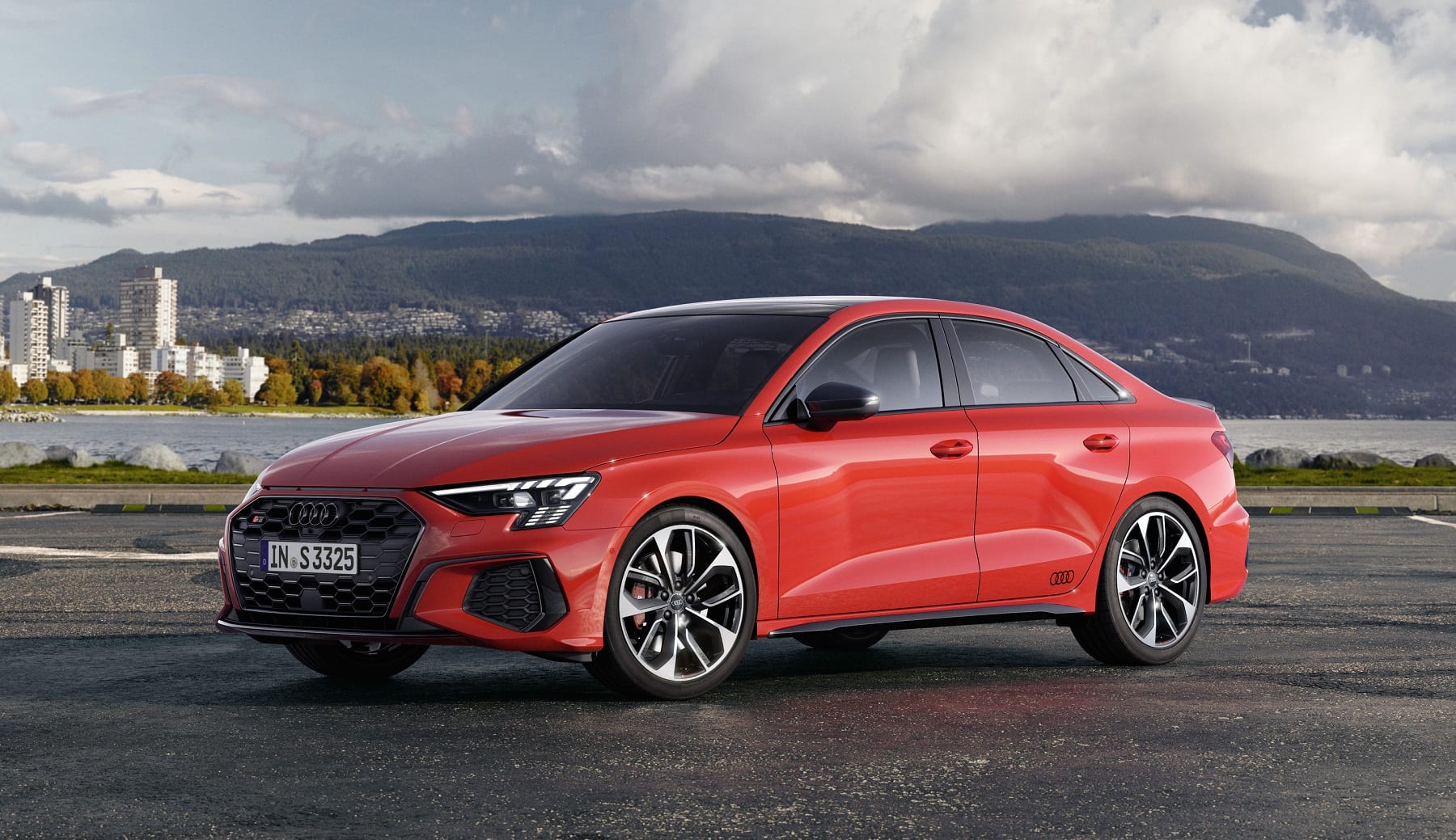 Audi’s awesome little sport compact is getting a bit of a makeover later this year. The S3 sedan and sportback get updated looks, more power, and more #dynamic when they go on sale this month in Europe. US sales will follow shortly, though I don’t suspect we’ll be getting the hatchback here.

Some of the biggest news with the S3 is that it breaks that magic 300 horsepower mark with its newly refined 2.0-liter TFSI turbocharged four-cylinder engine. Some of the tricks they used include an “Audi valvelift system” which adjusts the lift of the intake valve to keep the combustion chambers filled plus better thermal management. Up from 288 horsepower, it now produces 306 horsepower and has 295 lb.-ft. of torque (up from 280) to go with it. The standard seven-speed S tronic offers super quick gear changes and channels power through an also standard performance-optimized Quattro system. They claim a 0-62 mph time of 4.8 seconds on both sedan and sportback models. 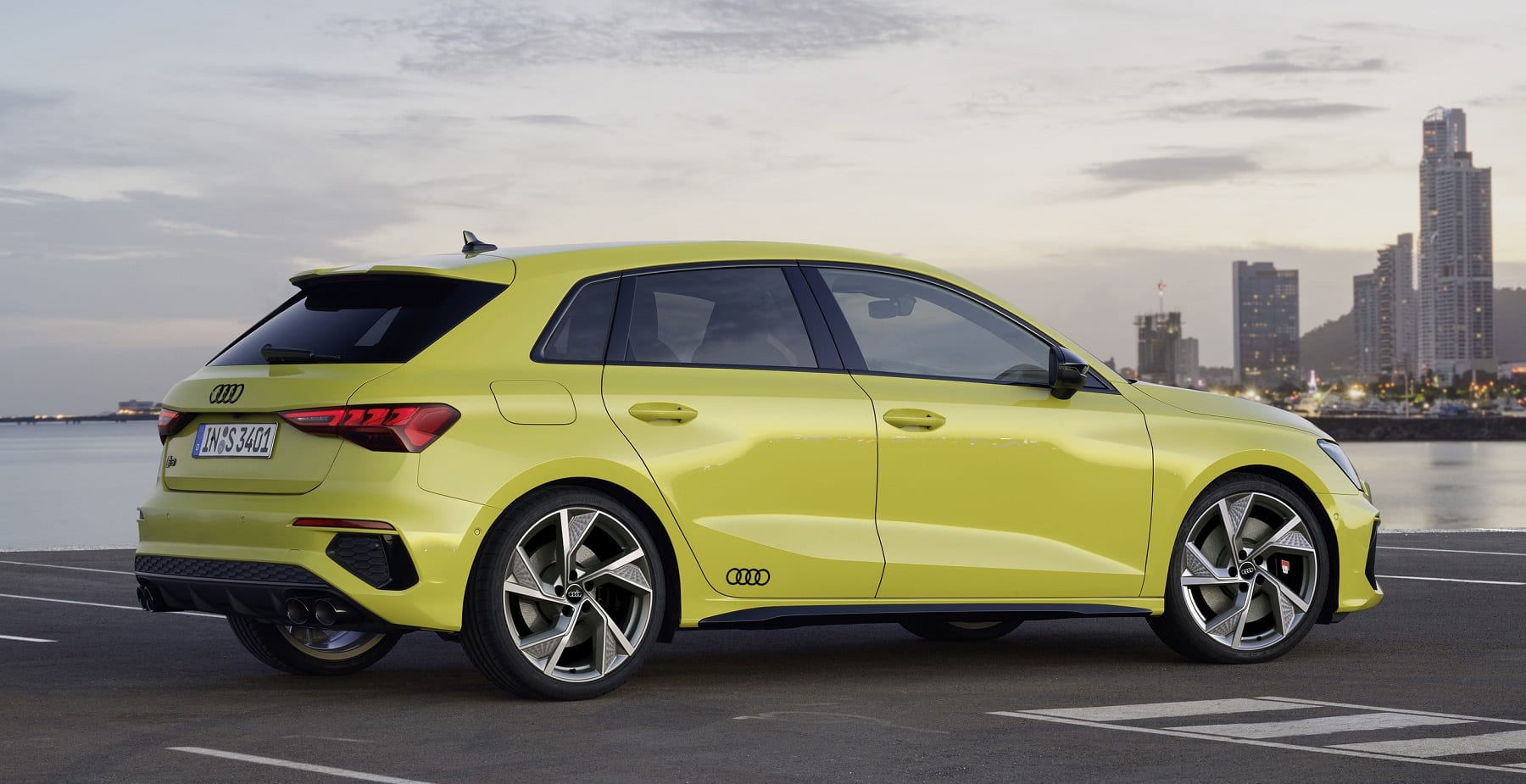 The chassis is largely the same as the outgoing model with a four-link rear axle and progressive steering, but the standard suspension is now 15mm lower. You can opt for the Series S Sport Suspension with Damper Control as well though. Oil flow in the dampers is controlled by variable valves which adapt to road conditions, driving situations, and driver preferences within a few thousandths of a second. There’s a new electric brake booster as well for “strong and spontaneous deceleration”, which is usually what you want from one of those. All four brake discs are internally vented and sit behind standard 18″ or optional 19″ wheels. 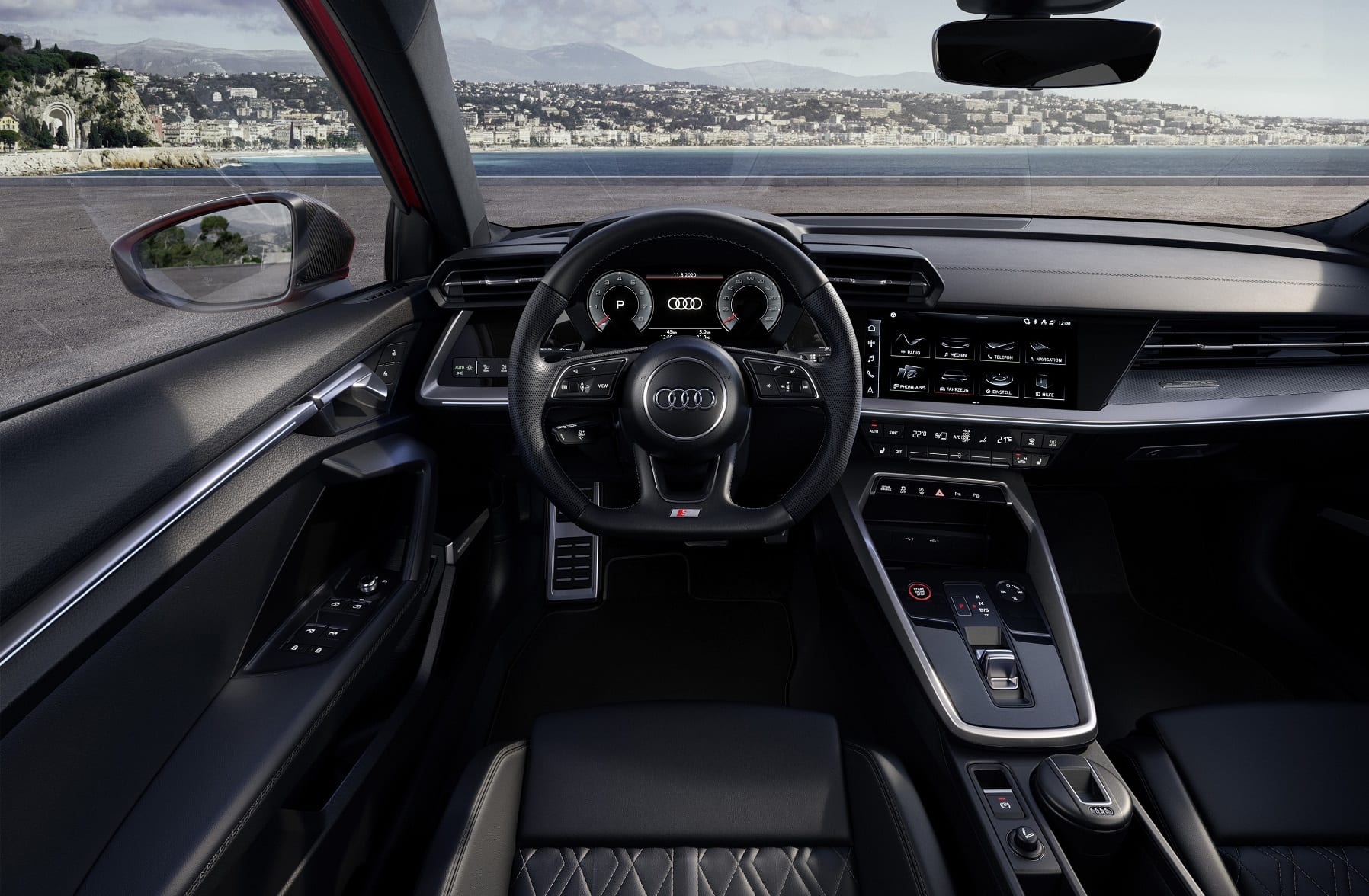 There is of course some new design features inside and out as you’ve probably noticed. Basically it’s the same Audi school of thought that brought us a large singleframe grille with its rhombus pattern, various air inlets all around the car, and some splitter and diffuser action – just more of it. They managed to add so much to this little car that it looks more like an RS3 at this point. The interior has some new accents and options as well. You can get Audi’s virtual cockpit, new ambient lighting, and new sport seats with upholstery largely made from recycled PET bottles.

Europe will be getting their first new S3s this October. Prices in that currency that looks like the weird E start at €46,302 and 53 euro cents for the S3 Sportback while the S3 Sedan is listed at €47,179 and 83 euro cents. Yes, they actually factored cents into the MSRP. I can’t think of a press release where I’ve ever seen that before.

Welcome to our new reality where everything is terrible and nothing good can exist because of the aforementioned everything that is terrible. Mazda has confirmed some crushing news that their gorgeous Mazda3 TCR project is dead without having turned a single lap in competition. It was revealed last fall with a planned launch this year until their contracted race car builder suddenly shut its doors. The program was then pushed back to 2021. But then the world went to shit and it, like many good things, is being cancelled due to global economic hardships caused by covid-19 according to a report obtained by Grassroots Motorsports. 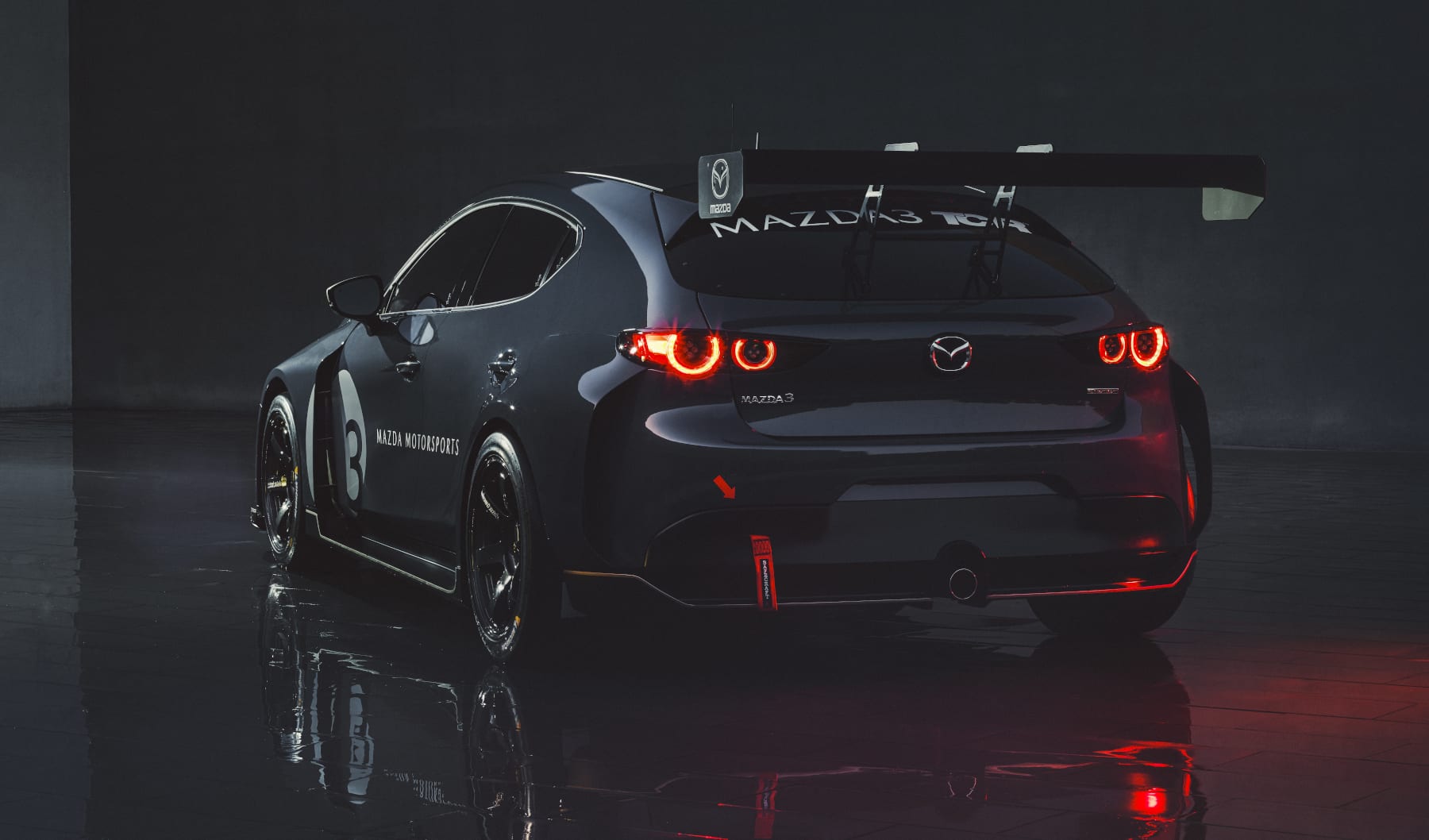 In a statement, they insinuate that the project was being led by Mazda North America. The decision seems obvious given how hard we’re hit over here. After all, Mazda isn’t a massive manufacturer so this program likely took up a not insignificant part of the budget. If Porsche needs to cut GTLM in America to ensure their survival, then Mazda certainly would need to cut TCR. It’s a genuine shame though because this was one of the most beautiful race cars shown in recent memory and it would’ve been a standout in the wonderful TCR class of competition. Just as Mazda was rolling out a turbocharged 3 with some clear influences from the TCR concept, I’m hopeful that they would pick this back up in the future if the Turbo sells well and we’re given a break from this constant hell hole we all live in.

Until then, press F to pay respects. 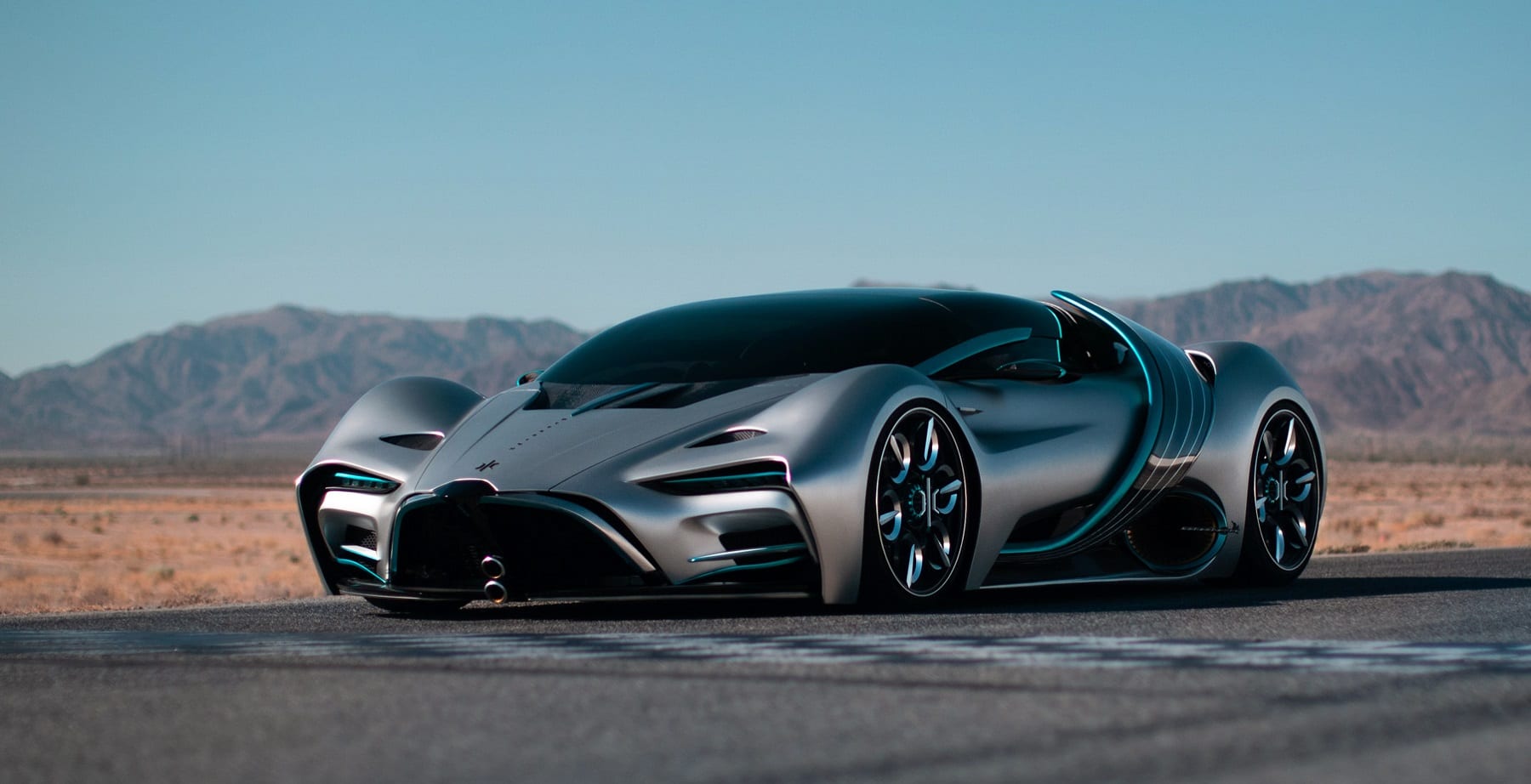 Remember about a month ago when a mysterious company was promising a groundbreaking hydrogen supercar? The one that I couldn’t find any evidence to prove that it actually existed in the capacity they said it did? Well they’ve made it a step further towards their path to legitimacy – they’ve debuted what they said they would with a timeline for production and without immediately asking for money. There’s still a lot of ambitions and hurdles in their way, like things you’d usually expect from trying to bring your first car to the market. But if it works, this could mean a bright future for hydrogen-powered cars.

Hyperion’s goal with the XP-1, other than to make a name for themselves, was to prove the capabilities of hydrogen power. They say it can provide better performance, longer driving range, quicker fill ups than recharging, and can be more scalable for various applications. They claim their tech is used in space and derived from tech pioneered by NASA. I suppose that’s why they had to make the XP-1 look like it drove through a scifi convention and put S P A C E on the dashboard. It looks like the kind of car that you’d see in b roll shots of a Back to the Future remake. 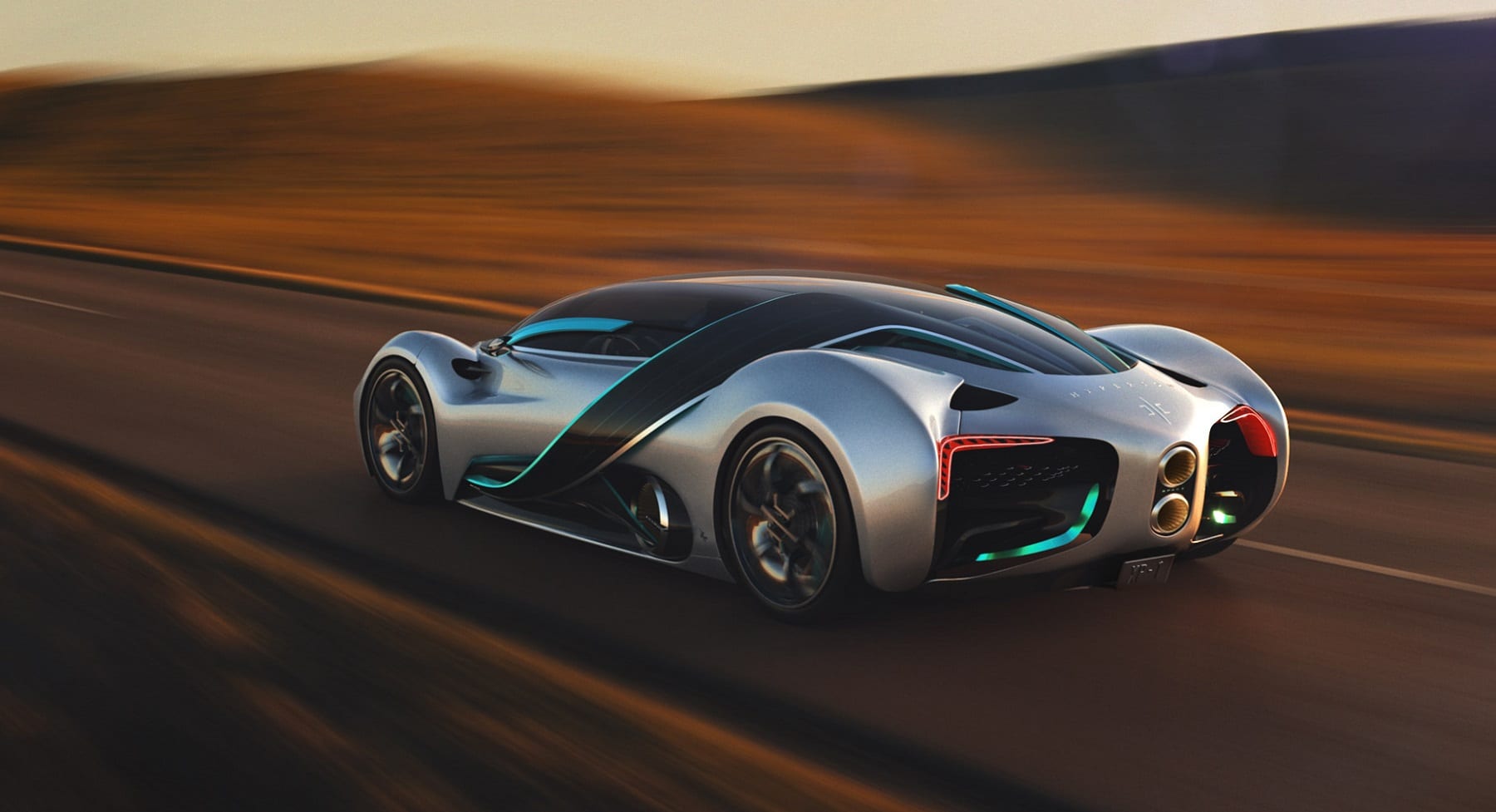 But ridiculous looks aside, this car could very well help prove hydrogen propulsion as a viable option in the automotive space. Assuming it can actually do what they say of course. They claim 1,000 miles of range with a 0-60 time of “under” 2.2 seconds and a top speed in excess of 220 mph. We don’t have many other specifics on the powertrain, but the obvious question is where would buyers get their hydrogen from. Well, one of Hyperion’s divisions exists solely to answer that question. They plan to build their own hydrogen stations across the country to lay the groundwork for further Hyperion models that would be more fitting for the masses.

They say just 300 XP-1s will exist but more cars that aren’t absurd hypercars are on the way. It’s a huge gamble though because hydrogen has never quite gotten off the ground. They’re not selling well and most markets don’t even have them as options because there aren’t any stations around. So Hyperion would effectively be building hydrogen stations across the country in hopes that their limited edition hypercar isn’t the first and only car they make.

While you can register your interest with them, they aren’t yet asking for deposits. The car is expected to launch in 2022. I’m sure the car will be changing a good bit before it’s deemed road worthy – like, for example, where the hell the front plate would go – but time will tell. 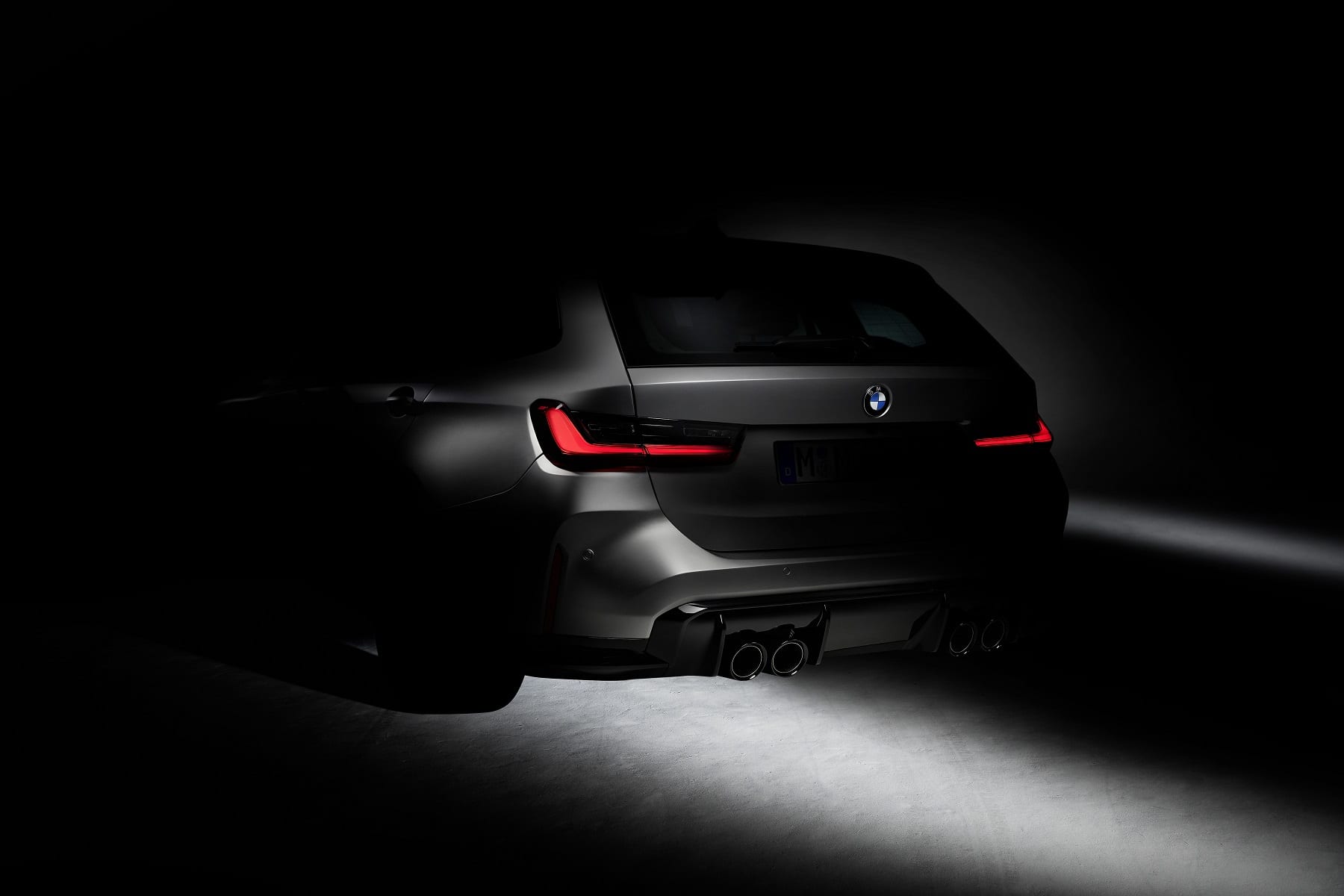 It only took years of cancelled prototypes and people making their own M3 Tourings for BMW to realize that it may just be a good idea to make their own. With a teaser shot that truly came out of nowhere, BMW has confirmed that the next generation M3 will be offered as a five door wagon. This is truly wonderful news and I’m happy to see people still embracing the wagon.

However… it’s a given that this will be for Europe only since, you know, they’re the ones actually buying wagons. Also there’s that absolutely hideous vertical grille that we got a taste of with the 4 Series which has also been spied on next-gen M4 and M3 prototypes. It’s a great day for wagons and thus the world, but I’m afraid the hype for this car will last until we see the front of it. BMW says they’re still undergoing testing and we’ll soon be able to see it in spy shots on the road and on the ‘Ring but have not given us a timeline for its launch yet.

I can’t show you the images here because posting spy photos another outlet paid for is kind of a no no, but CarScoops photographers have found next-gen Toyota 86 and/or Subaru BRZ (we can’t really tell which one) testing. Even though they’re still heavily camouflaged, it’s easy to tell that this thing is going to look wonderful. And best of all, their scoops have revealed a cheeky intercooler which would indicate a turbocharged engine. That means more than 200 horsepower! Check out the spy shots they captured and get excited.