So, the Mini Countryman. More like the Maxi size of a country, man. Am I right?

That’s what I’m supposed to do, isn’t it? Complain that all of the Minis are too big to wear that name. That slapping that badge on a crossover is a disgrace to everything that Alec Issigonis envisioned. To be fair, I might have gone that route before driving the Countryman. My local Mini dealership used to run ads advertising the Countryman as “the largest and most spacious Mini ever”. My response was always “isn’t that kind of missing the point?”

Classic Mini race cars are the originators of three-wheel motion

I drive a 2010 Cooper S as my own daily, which is already bigger than the first generation of the modern Mini. And that one is already bigger than the classic Mini. So I was very curious to see how the DNA translates onto an even bigger package. I asked nicely, and Mini provided me a 2019 Mini Cooper S E Countryman ALL4 with a full tank of gas and a mostly empty battery. Oh yeah, this one is the plug-in hybrid model. 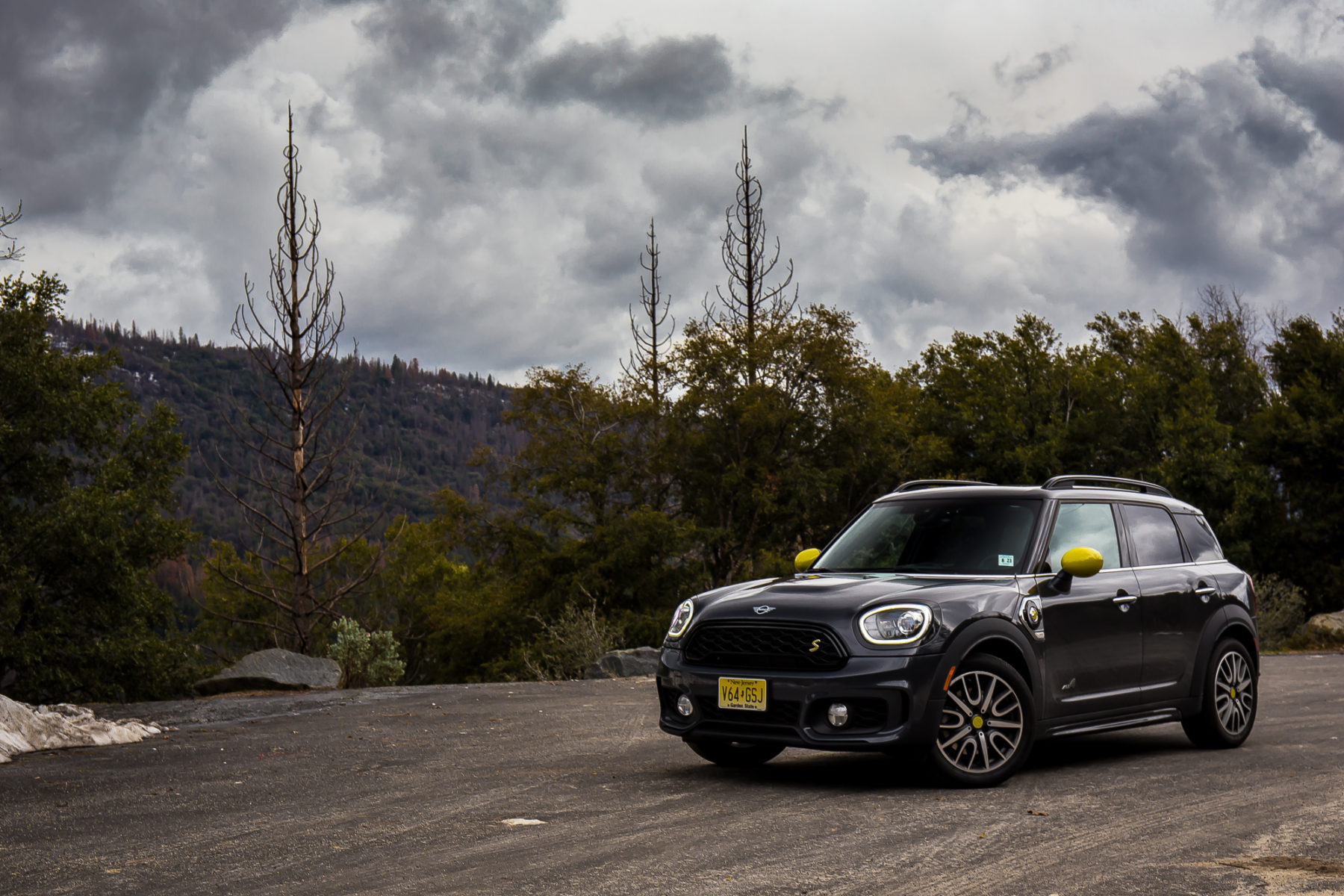 Still a fan of the brand

Personally, I’ve always liked the Mini brand. I especially love that all of the lights are on toggle switches. Even the starter is a giant lit up toggle switch. Companies, make more toggle switches. It makes everything an event. We feel like we’re fighter pilots, and everyone loves that. In a world that seems to be getting more and more serious by the day, and more and more averse to risk, they seem to at least have a sense of humor. Granted, it’s the sense of humor of a German foreign exchange student who watched too much Monty Python, and now does the most painfully awkward accents you’ve ever heard, but at least they’re trying to have fun.

Also, full disclosure, for the entirety of the time I had this vehicle, I was dying from the flu, some mysterious intestinal parasite, and something that made the left side of my face go weird and tingly for most of a day. So if at some point you think “this guy has no idea what he’s talking about”, you’re probably right. That’s just me trying to remember what mysteries of the universe the medications were telling me.

My first impression of the Countryman was one of pleasant surprise. Now, it’s never going to be some nimble little coupe, but it was more than competent at being hustled through the late night highways of San Francisco. I wasn’t about to push the handling limits of a strange car, on a strange road, in a strange state, so there won’t be any talk about how it understeers at the limit or how the steering wheel is as lively as an eel performing an interpretative dance to the tune of “Thriller”. 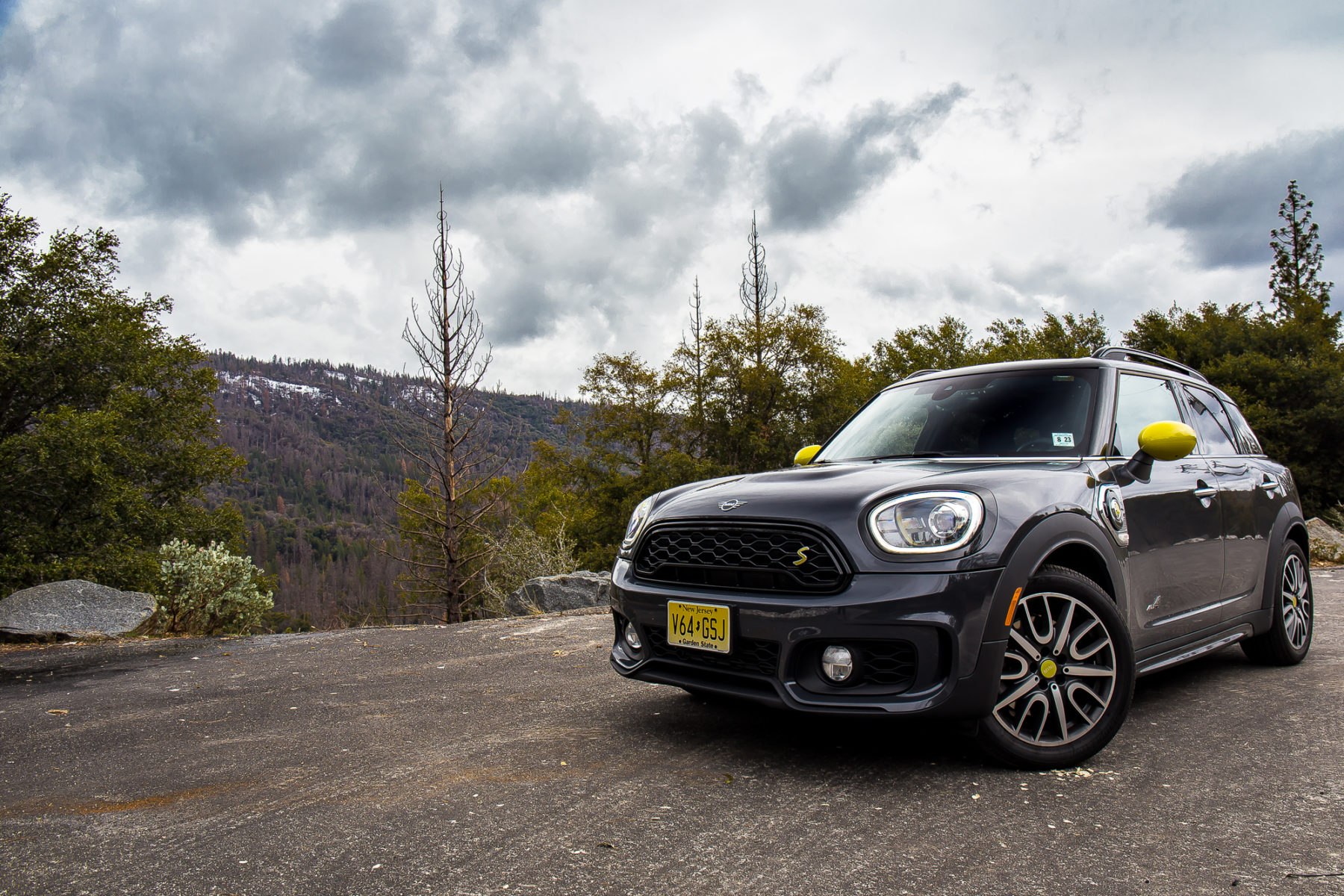 That being said, the chassis was extremely well composed. It inspired confidence in fast sweepers. The steering was direct and heavy, even if it was nowhere as communicative as my smaller Mini. That’s not necessarily a bad thing, mind you. Yes, the Internet wants a steering wheel that tries to snap your fingers at every pebble and crease. Real normal people just want to go to the store. If they can have something not terrible to drive there, that’s a bonus.

I thought the suspension in the Countryman struck a healthy balance between being composed in the corners and compliant in the city. The streets in San Francisco, and even up in Yosemite, are not exactly the roughest in the world, but the any bumps along the way were soaked up quite well. That’s not to say the Mini floats over them without you noticing. It did, however, manage to take them without jostling any important organs loose.

Driving the Countryman around other crossovers, SUVs, lifted wagons, sport activity coupes, etc remind you that while it’s big for a Mini, it’s still on the small side compared to a lot of what is on the road. For example, the Countryman’s roof sits nearly half a foot lower than that of the Honda CR-V. In fact, the difference in roof height between the Countryman and the CR-V is roughly the same as that between the Countryman and it’s Cooper baby brother. So while it is “big for a Mini”, it still gets dwarfed in nearly every parking lot. Getting boxed in by seven seat SUVs and quad-cab pickups is still appropriately hilarious, as befits the Mini badge.

While Mini, in their non-stop push to be the sitting-in-the-seat-backwards-rapping-at-the-youths-cool-teacher of car brands does allow you to spec a manual transmission to any of their vehicles, the hybrid variant of the Countryman is only available with an automatic. A bit disappointing, but not surprising. If you’re into banging your own gears and rev-matching your own shifts, odds are you’re not looking for a plug-in hybrid. That’s not to say they’re mutually exclusive, but I imagine there’s not a ton of overlap. Plus, these days, a computer controlled automatic transmission can be more efficient than a manual, and efficiency is the name of the game with vehicles like this.

At least, it’s supposed to be. That’s the point of a hybrid, after all: to be get great fuel economy, save the planet, and rub it in everyone’s face. But the Mini Cooper S E Countryman ALL4 is interested in being green in exactly the same way your local frat boy is when hitting on the vegan barista: only in a very specific set of circumstances, and not for very long. 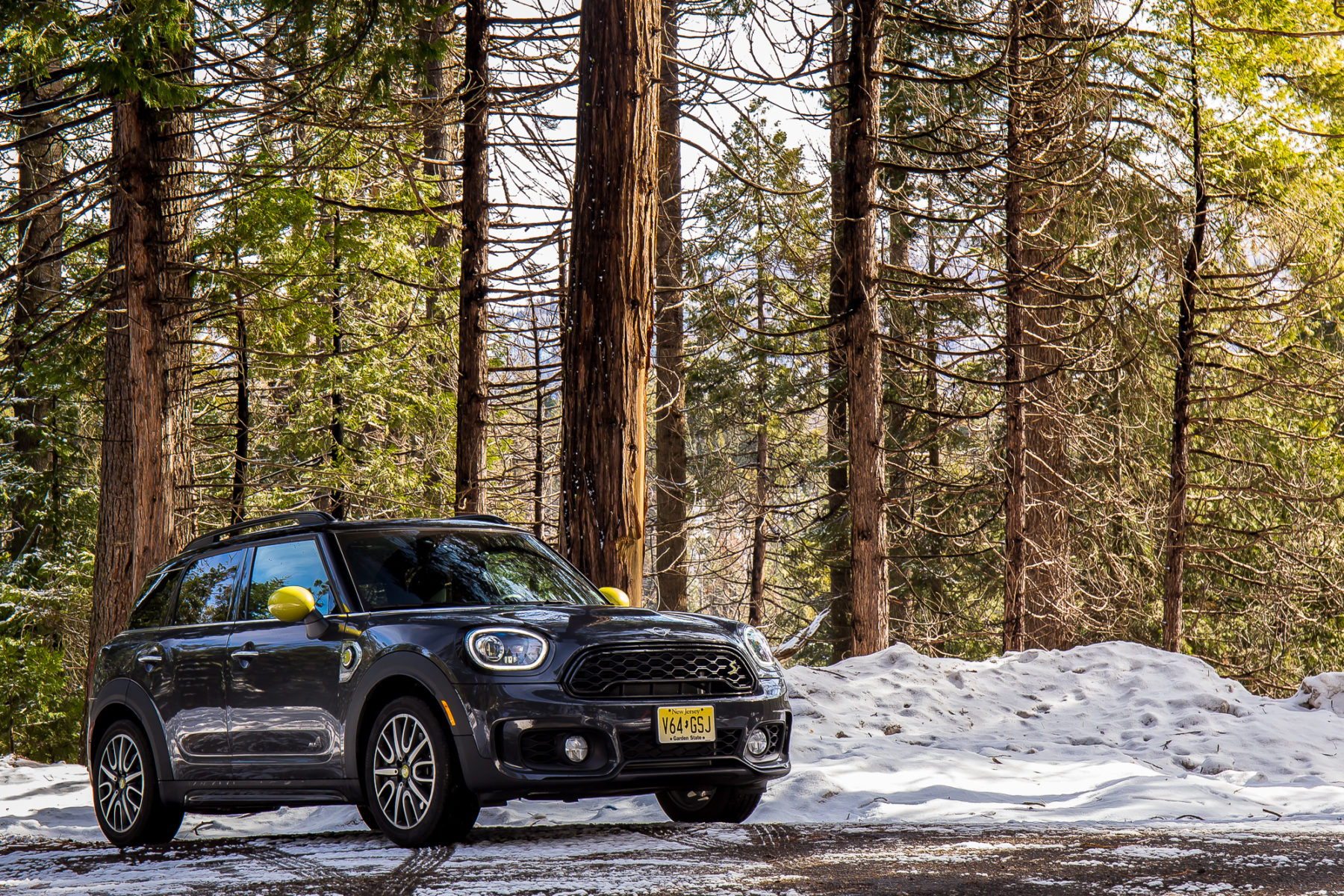 According to Mini, the Countryman hybrid will get 65 miles per gallon. But again, that’s only in a very specific set of circumstances. When we left San Francisco to head to Yosemite, our battery was nearly depleted, and that battery is what powers the electric motor that offsets the gasoline engine. Without it, you’re relying on just the 1.5-liter turbocharged three cylinder to move you around. That’s not quite as efficient. In over 200 miles of mainly highway driving, primarily in “Green Mode”, I averaged a hair under 30mpg. When you combine that with the fact that the fuel tank only holds 9.5 gallons, your range without a charged battery starts to become pretty shocking.

The obvious fix is to keep the battery charged. The ideal scenario is that you would charge it up overnight at your house, commute to your job in the city, using that beautiful electric power, top it off at work, and cruise home again. You can run a theoretical twelve miles on full electric, so that seems to be the best use case. But there are plenty of hybrids that get by just fine with never being plugged in, and Mini themselves say that you can recharge as you drive, so plugging in never needs to happen.

Like all hybrids and electric vehicles, the Countryman can recharge its battery using regenerative braking. Basically that means that as you let off the gas, that forward momentum goes into the whatsit, and spins the gizmotron, sending the sparklies into the battery for later usage. Sorry for the technical jargon.

Luckily, Yosemite has a few small hills, great for charging batteries. Oddly enough though, Green Mode is terrible for recharging. Sport Mode, however, dumps a ton of juice back into the system. So coming down the mountains, we’d throw it in sport, bomb some corners, and top off the battery. Again, the chassis does amazing up in the mountains. Inspiring a lot of confidence even if the drop offs take some of it back. I’m from Missouri, and not exactly used to cliffs into nothingness at the edge of the road. The most I have to avoid is a rogue deer.

Battery back in action

For the run back from Yosemite to San Francisco, we had a fully charged battery. Now we’d see what the full hybrid powertrain could do. Truly, the difference was mind blowing. During the drive out on just gas alone, we saw the aforementioned 29 mpg. During the drive back on hybrid power? The Countryman netted us 35 mpg. Wow. Truly, we are living in the future. Don’t get me wrong, there was a stretch in the middle there where the planets aligned, the birds sang, and we maxed out the miles per gallon-o-meter. But a few brief miles later, the battery was empty again, and we were back to relying on that little 1.5L engine again, and our average started to rapidly fall.

At the end of the week, I was a bit torn. Physically, I mean. I existed in a semi-lucid state bouncing between the toilet, the bed, and the seat of the Countryman. But once I was no longer crying over a toilet, and had some time to collect my thoughts, I remain conflicted. The Countryman had surprised with how much fun it was to hustle around. The size hadn’t been an issue at all. I understood entirely why it served as the platform for Mini’s WRC efforts, even if I think that the Cooper would have been more entertaining.

But at the same time, all of the hybrid crap had been nothing more than irritating. The fuel economy was barely better than the standard car, at least for what we were doing, and a fuel tank of NINE AND A HALF GALLONS is laughable. I seriously thought there was something wrong with the gas pump when it shut off at eight gallons, and made my girlfriend look up the fuel tank capacity in the owner’s manual. For reference, every other trim level of the Countryman gets a 16.1 gallon tank. This is clearly an urban commuter car in a large Mini shell, that starts at just under $37,000. 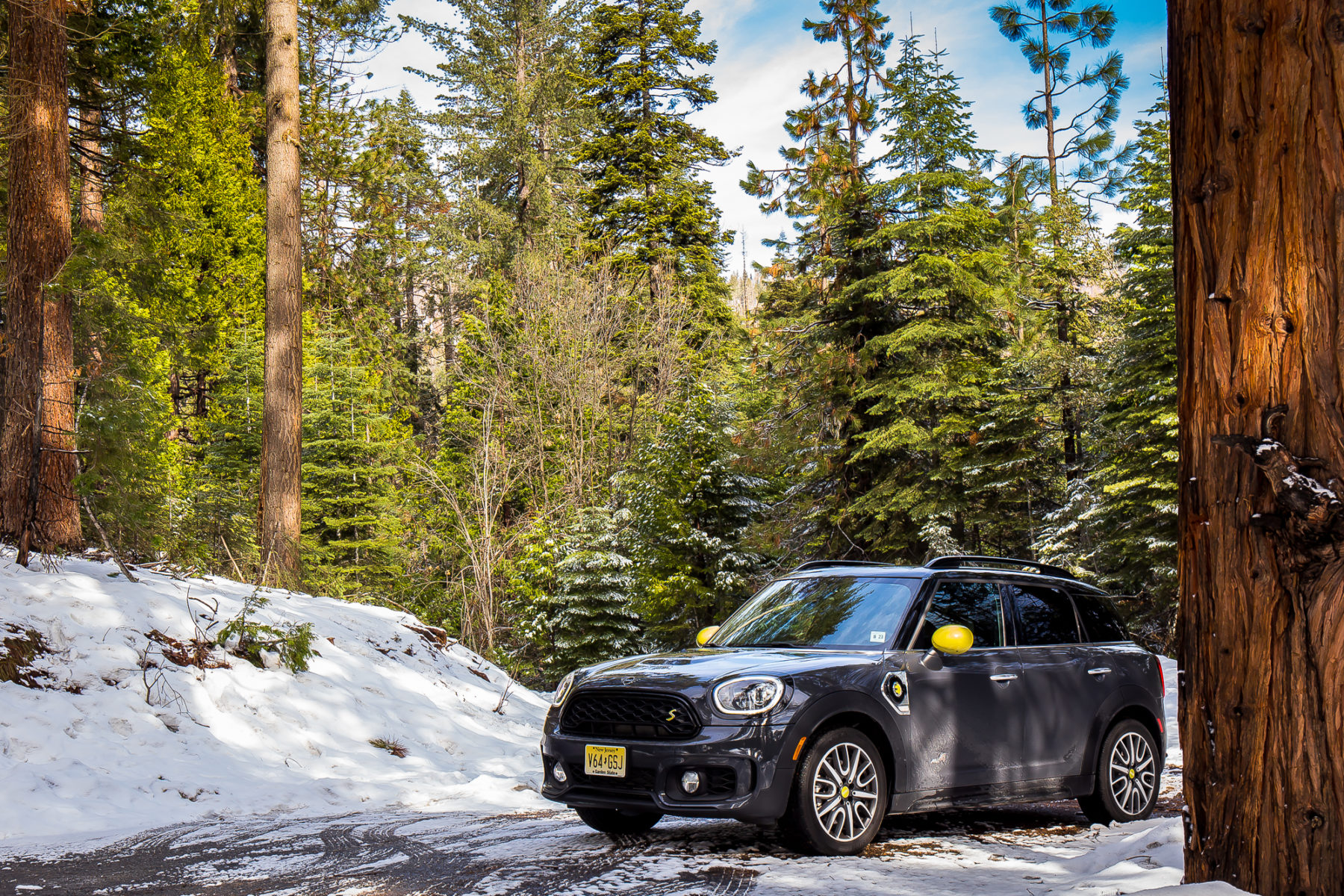 All things considered, the Countryman is not the end of the world for the Mini brand. Every company has to make a crossover of some type these days, because they print money. Mini has done it right, if you consider this to be its crossover. The Countryman can wear it’s badge proudly. Yes, it’s the big boy in the family, but it’s still smaller than nearly everything else out there, and can definitely hold its own when the road gets twisty.

But skip the hybrid, save yourself some cash, and buy the Countryman Cooper S ALL4 with a manual instead.

[Disclaimer: Mini loaned the author the car and included a full tank of fuel… well, gas but not electrons.]