The Hooniverse Q&A with Duncan Ende

[youtube]https://youtu.be/NOg3RrOYXf8[/youtube] You all know Duncan Ende. He’s the SoCal Hot shoe that has helped us out with, well, a lot. From appearing on the Podcast with Jeff and Blake, to helping us out with the new Miata, Duncan has been a good friend to us here at Hooniverse. With him being in town for TRG Aston Martin for the Pirelli World Challenge I thought I should sit down with him and ask some questions from fans of the site… Q: Any major differences between preparation for a short, tight track or for a longer, more open track? Duncan: Not as far as the driving side goes, but every track requires it’s own setup on the car, so that will be down to the surface, how smooth or bumpy it is, and what type of corners you have to deal with. And how much drag you want to put on the car. The aero side of things is paramount, and a lot of tracks are a major compromise. COTA is one of those places, people think of it as a flowing open track, they think of the esses, the triple right hander, and the straightaway. But it also has a ton of hairpin turns here. We use 1st gear six times a lap here, which is unheard of. Q: Speaking of that, what is your favorite corner or complex here at COTA? Duncan: The run from turn 2 to 6 or 7 is really good fun. I like faster esses like VIR, but these tighter ones are fun in a fast car. The triple right hander is also a lot of fun. In some cars it can be understeer city, but others you have to watch the backend. 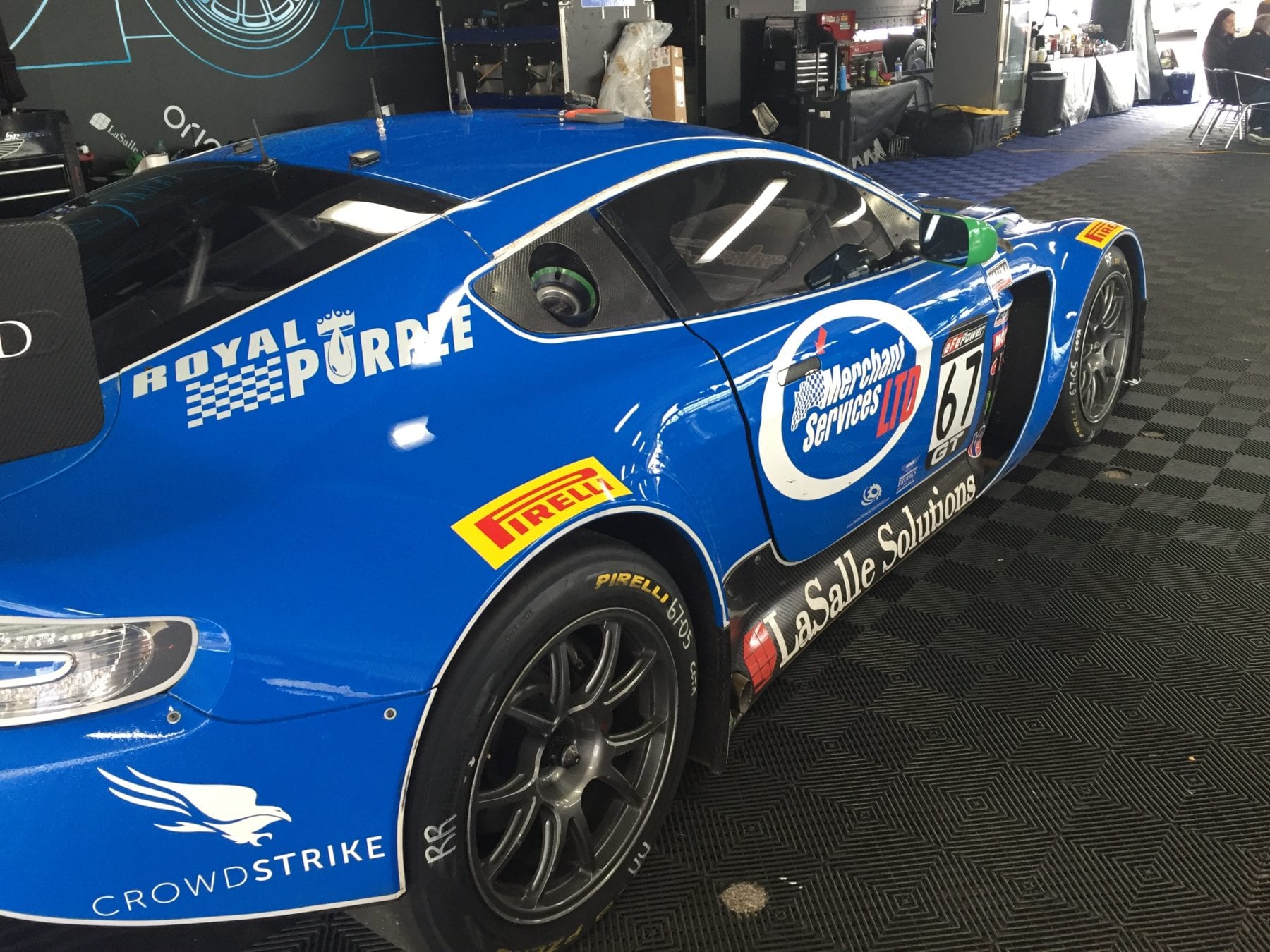 Q: When doing long runs, if nobody is pressing you do you race every corner trying to be perfect, or just go into autopilot at a more relaxed pace? Duncan: If I’m not being pressured in a race, my pace is really dictated by how much I have to look after the tires. If it is a fragile compound I might back off a bit, save to tires to see if I have to battle someone later in the race. If it is a tire I can double or triple stint, I can push a lot harder and feel good about it. You have to maximize every lap you get, so consistency is key. Q: What makes the difference between a really good driver and someone who is world class, e.g. David Coulthard and Mika Hakkinen? Duncan: I think the difference between the very best and the very very very good is down to is precision and consistency. That’s ultimately what racing comes down to. We are trying to do a very precise act as close to perfect lap after lap. And most of us have never driver a perfect lap over all. So it’s trying to get as close as were can to it, and do it repeatedly. In some cases it’s more of a mental thing whether it’s a preparation issue or sort of being mentally strong. There are some guys that have the speed and can do it over one lap, and maybe they get the confidence behind them and have a really great run through the year but when things come against them, they crumble. There are definitely cases out there where you think “How did he not win the world championship?” Me: You putting it like that has made me realize something: every racing driver I have ever talked to always talks about racing the same way any actor or musician talks about performing. Do you feel like Motor Racing is sometimes more of a performance than a sport? Or is it just an element of memorization and perfection a different discipline? Duncan: I never thought of it like that. I have no musical ability, but I did do a little bit of acting in high school. And I really don’t so much see the parallel there, but I do see between being a musician and needing to nail your part on the cello, or being a dancer. There is a bit of that. When I first started racing, when I did my first Skip Barber school, I had an instructor that brought up which sport is most like racing, in terms of mental skills that you need to compete with. Most people think racing is about bravery and reflexes, and it’s really not. Reflexes help if you are in an indy car race and things go really south in front of you and you need to avoid the wall, then yeah, reflexes are important. But when you are in the car normally, it’s not about reacting so much as placing the car in a way where you know what it’s going to do. The sport he told us was most like racing in terms of skills is actually golf. Cause it’s about doing a very precise task as close as to the same as you can time after time after time. It’s also a sport where there is no perfect. In bowling there is a perfect game, baseball there is a perfect game. Basketball you can be perfect. It is impossible to quantify what a perfect racing lap is. No one has done a perfect race where they aren’t giving up a little time here and there. But that was something I really imprinted on in terms of what racing is all about. 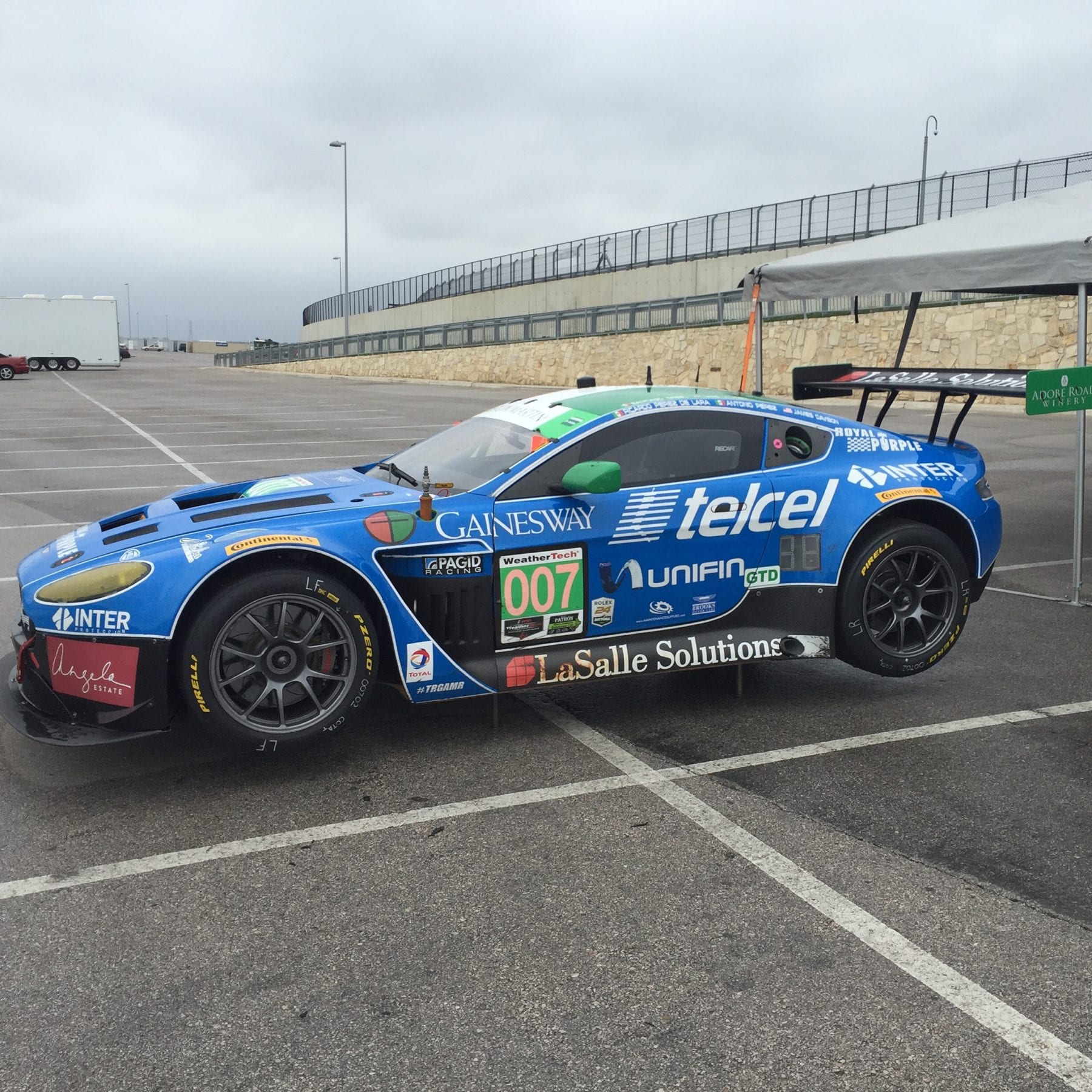 Q: How did you get into this how did it actually become your job? Duncan: I started racing after high school. I did the Skip Barber schools and their school series with the Formula Dodge cars. And to get a little seat time concurrently, I did a little bit of Karting, but I definitely didn’t come from a karting background. And I tried to make up for as much lost time as I could, because I was eighteen, nineteen, twenty. And anybody else I had been racing against that was my age had been doing this since they were fifteen or ten. I started learning the craft and expanded into the IMSA lights series when that was relaunched in 2006 and I also got a call to see if I could do some Atlantic races that year, because the team’s driver had some visa issue or funding issues so I got into the atlantic car for a little bit. I discovered I was totally unprepared for it. It was way too big a jump. The field had gone from being maybe a handful, three guys that could regularly win, maybe five, to being twenty guys within a second of each other, and I was not in the sharp end of that. So at the end of the year I was looking at how I had done and it was not so good, I did okay in the Skip Barber stuff and I won every race my car didn’t break in the IMSA lights series. So I was like, I fell in love with racing in the first place watching sportscars, I had a lot of success in the sports car thing, and maybe I should do that. I got introduced to a few people in the Grand AM cup paddock, and actually getting into a program over there. And over the years developed the sponsorship side of things to keep it going. Q: Track food, what venue has the best concessions stand? Duncan: That’s a good question. In the teams we don’t do a lot of the concession stand stuff, because we usually have a vendor that feeds the teams or we are bringing in our own stuff. On a small weekend I know that Laguna does not have very good track food. Austin probably has some of the best track food, but it’s hard to beat the brats and sweetcorn at Road America. 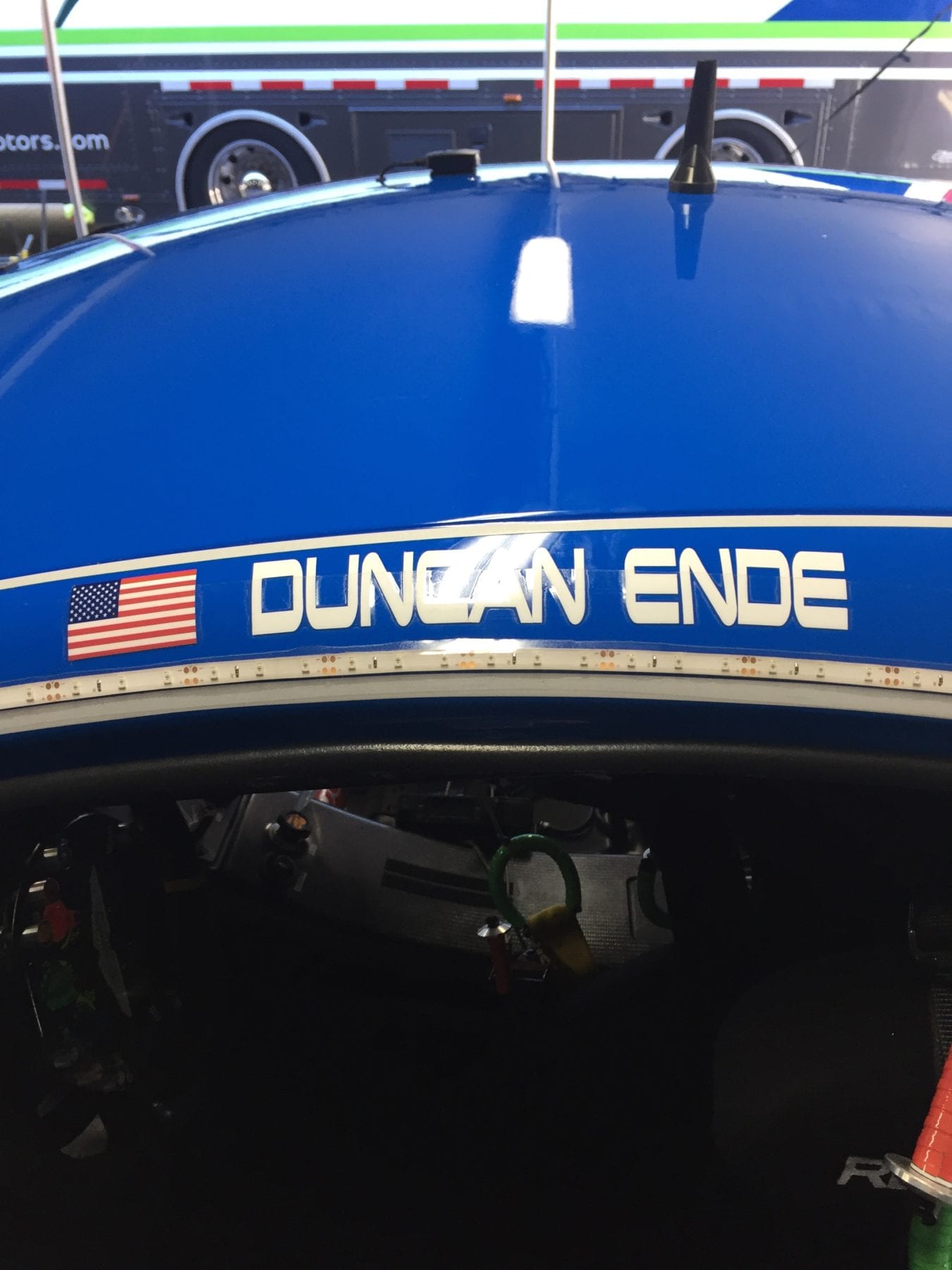 Q: Road trip from El Paso to Port Arthur, do you take Ricky or Jordan Taylor? Duncan: Ooh, that’s tough. First of all, I have no idea where Port Arthur is, so I don’t know how long I would have to deal with either of them. I like Ricky and Jordan a lot. I met them both when they first got started in cars when they were thirteen, fourteen. I might go with Ricky, because Jordan is in such high demand and I don’t want to take away from his busy schedule from being the face of motor racing for us. Q: Funniest encounter with the police? Duncan: Do I want this on the record? I’m gonna plead the fifth on this one! Q: Other series he’d like to participate in most? Duncan: ALMS was really nice, we were unfortunately in there when it was past it’s hay day, but the crowds from some of the events, particularly Sebring and Petite LeMans were really top notch. And the level of professionalism in the paddock was exactly where you wanted it. And it’s always a great feeling coming through the essess at Road Atlanta and coming up to five with five to ten thousand people on the hill hanging out, watching and grilling. It was pretty great. Me: Going off that, what’s your favorite track? Duncan: Favorite track is LeMans, LeMans is unlike anything else. And I have only done the test day there, and unfortunately we were on a very limited program. So I got very few laps, just enough to get signed off to be able to do the race. But every time they told me to pit on the radio I got sad because I didn’t want to stop driving because the place was so amazing. If we are talking about what we can call real tracks my favorites are Road America, Montrablanc, and Mosport. They are all super fast, have really demanding corners, and have incredible atmosphere. And MoSport especially, there is one corner you could call slow there. And the fast stuff is unbelievable. I am happy going to any of those places anytime. Me: What’s it like being back at TRG? Duncan: It’s nice! It’s a very different team in terms of the faces around. When I left it, I think there are only two or three people that were here when I left. There are some other familiar faces that I have known from the paddock for years, but were from different programs then. I very much like everybody who is new to me in the team and getting integrated back with the team. Kevin and I have been busting our asses to get this program off the ground. Everyone in the paddock are always working really hard on their program. A lot of people have another primary business that really just takes some resources, Kevin has just worked really hard to get me back in. 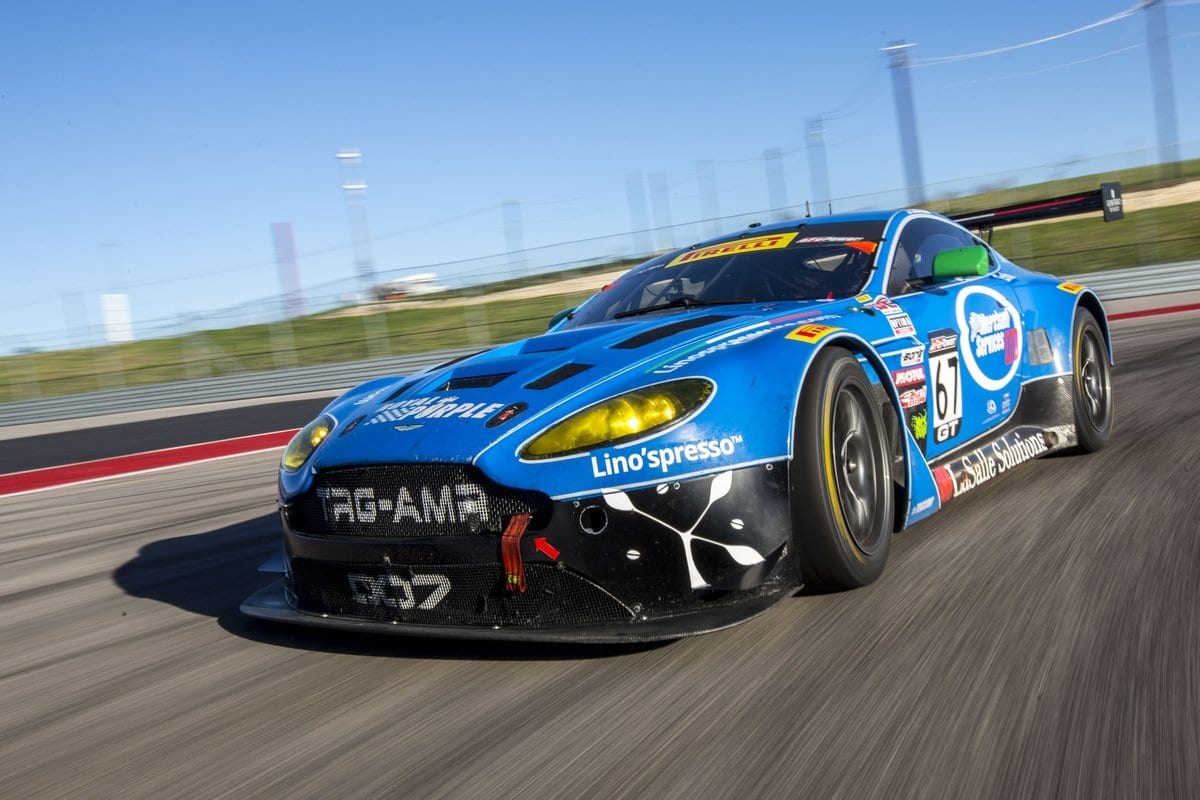 Q: If there was entrance music for drivers, ala wrestling and baseball, what would your song be? Duncan: Entrance music! I think I’d go with Shadowplay by Joy Division, but since we are talking about some fantasy land where I get entrance music, if I could somehow fill up ten minutes making an entrance I’d do it to Purple Rain. So everyone, there you have it! Duncan Ende can be found on twitter @DuncanEnde, and can be found on the latest Hooniverse podcast!