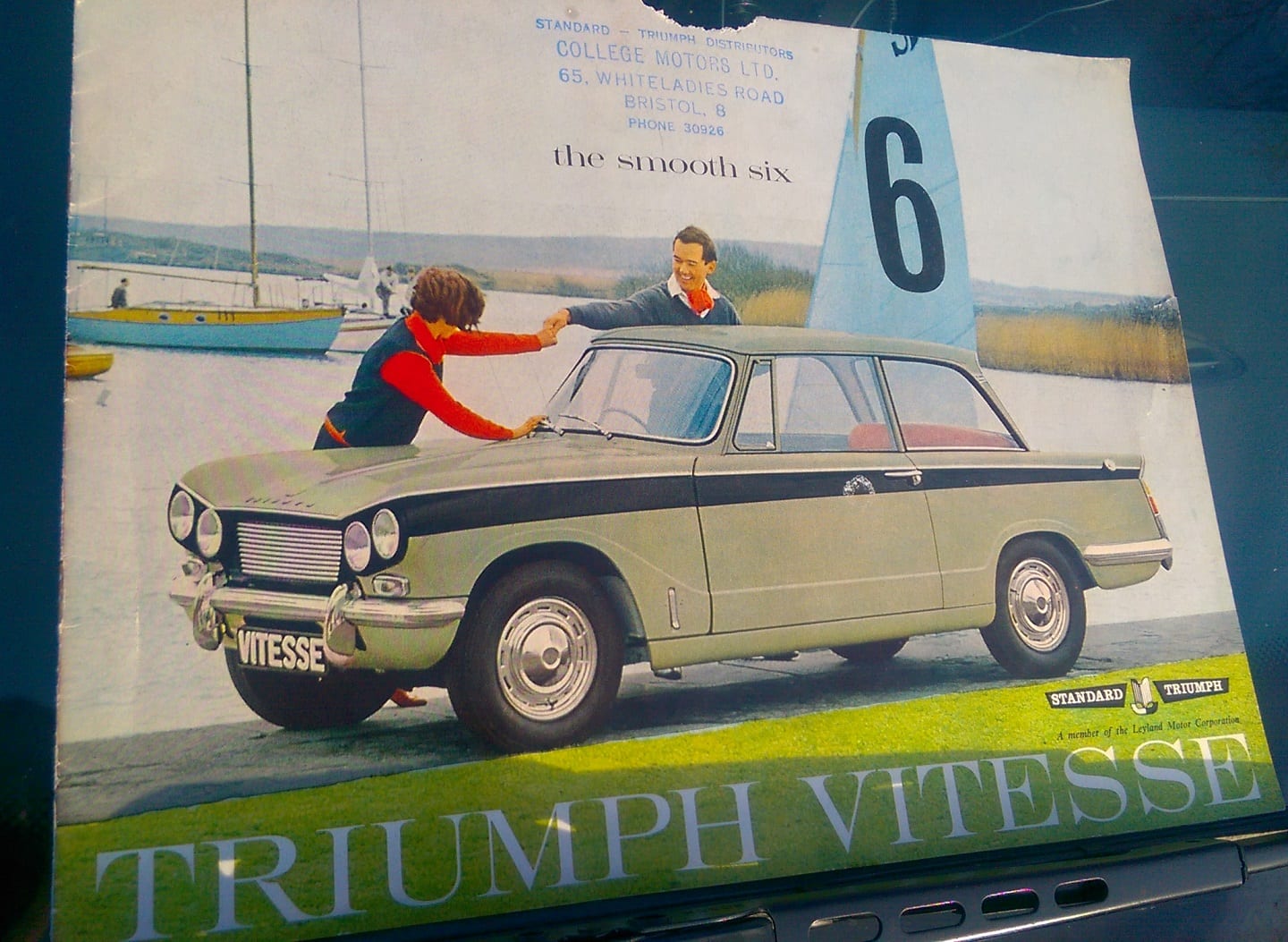 It’s time for our weekly contrast with all that’s shiny and new in the Hooniverse News, as we blow the dust off something which had it’s moment of glory in the dim and distant past. Welcome the The Carchive. I presume I was hungry. Otherwise I struggle to explain the strange bite mark on the top of this otherwise well-preserved 53 year old brochure for the Triumph Vitesse.

PICTURES CAN BE CLICKED FOR (SLIGHTLY) ENHANCED CLARITY

“…a new 1600cc version of the great Vanguard 6 engine, gives the Vitesse the heart and lungs of a gran turismo sports saloon with the smoothness and silence which only a 6-cylinder unit can achieve” This was a narrow bore version of the traditional straight-six unit offered in the Standard Vanguard, a car not really famed for its sporting credentials. In this guise it still wasn’t a powerful engine on paper, but accounts at the time said it to be sweet and flexible. And probably sonorous. With 70 bhp performance wasn’t blistering, ninety-ish at top end, reaching sixty seventeen seconds after rest. But in 1962 Britain was unaffected by the horspower race erupting elsewhere in the world; real performance was still pretty much the preserve of the wealthy.

“This picture tells you two important things about the Triumph Vitesse. First, it shows you what a superbly engineered piece of machinery it is. This is what you would expect from a product of the Leyland Motor Corporation. There’s no finer certificate of roadworthiness”. Indeed, they weren’t always crap, that came later. In the heyday of Standard Triumph the corporation was very respectable, thanks, though not especially revolutionary or exciting. The second thing it shows is the rear suspension arrangement, with a transverse leaf spring A BIT LIKE A CORVETTE! But combined with swing axles the Vitesse was also equipped with roadholding which quickly became treacherous if either of the rear wheels tucked under. This happened.   “The first thing one notices about the Triumph Vitesse is its striking good looks. Taut and elegant, it is an essay in how to be beautiful without trying too hard. No chrome curlicues. No over-stated “styling”, just pure lines, every contour modelled with a purpose” 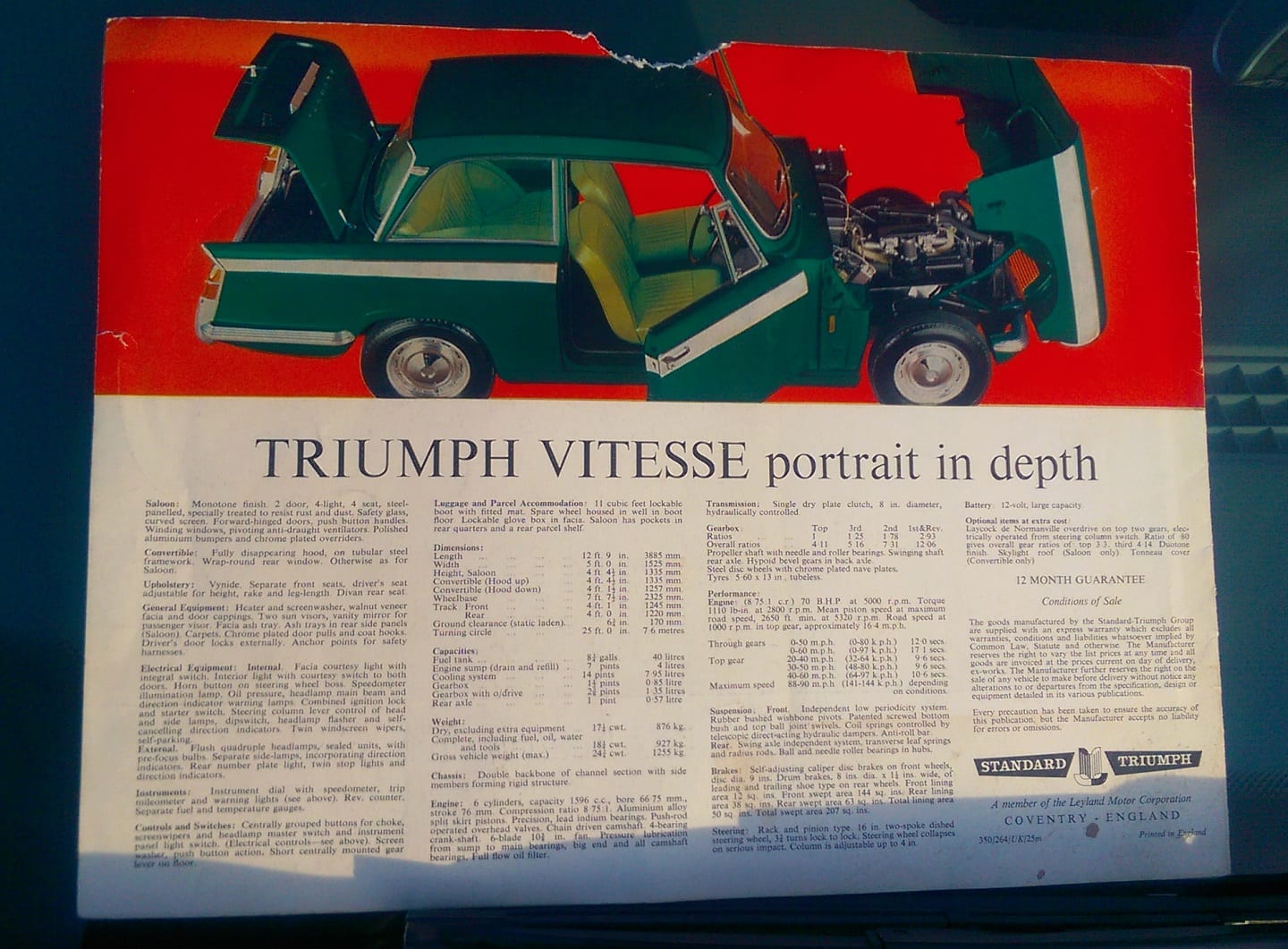 The Vitesse was, of course, a aggrandised Herald, from which the basic design only differs around the front end. The Vit was given quad headlamps in a “Chinese Eye” layout. It was pretty cunning and immediately gave the car a far more assertive demeanour than the humble, family-pleasing Herald. Modifying the front end sheetmetal was made easier by the fact that the whole front end of the car lifted up as a clamshell in the same way as the Jaguar E-Type, which incidentally made DIY maintenance a lot more straightforward than other cars. This was fortuitous. It’s also worth mentioning that the convertible model and the later, bigger, V8ier Triumph Stag were alone on the British four-seater open-top car market for quite a long time.

“Every detail of the Vitesse interior breathes luxury. Deeply-upholstered seating, the driver’s seat adjustable for leg length, height and rake. The elegant functionalism of the fascia with its comprehensive range of instruments.” I must admit that looks like a really nice thing to sit behind. It was a far cry from the Herald, which shorn of the wood cappings and virtually all of the instrumentation, seemed straight mean in comparison. The Vitesse was later treated to a more powerful, two-litre six, and production ended in 1972 when its Herald base was discontinued. The Vitesse name found its last British applications after the Triumph name had been retired, first on the (I think it’s safe to say) Legendary SD1 Vitesse, which made wonderful noises with its ex-Buick V8 and enjoyed considerable touring car success. It next turned up on the rump of the somewhat less legendary Rover 216- the Anglicised version of the Honda Ballade and later arrive inscribed on the seatbacks of the Rover 800, first with the 2.7 Honda V6 and later with the 2.0 Turbo T-16 engine. With 200hp this final machine would also be the fastest Vitesse of them all. And from my long list of impossible things that I wish would happen, the re-emergence of Rover and the Vitesse name having credibility once again features highly. (All images are of original manufacturers publicity materials, photographed by me. Copyright remains property of BMW, who need to release a new Vitesse or, in fact a Stag, immediately please)