[The good folks at 4x4ward reached out with an awesome look at a special-edition Pajero that we’d never heard about. Here’s what they know about the Paris-Dakar Edition Pajero. Check it out! -JG]

If there’s one thing that Mitsubishi hates, it would be cupholders. For whatever reason, their animosity towards beverage containers lasted decades until in the early 00s customers finally had enough and they caved. On the opposite side of that coin however lives the thing Mitsubishi loves most of all: special editions.

Coming from the Delica space, these are all too well known. Chamonix (Winter edition), Jasper (Summer edition), Active world. Pajero had the Field Master, the Evolution, and sadly, the Final. And despite being made year after year there still weren’t too many produced. The peak of annual Chamonix production for the L300 Delica was 2,500 per year. But even that count seems readily accessible compared to what Mitsubishi did for 3 models of the Gen. 1 Pajero. The Camel Trophy, the Paris Dakar: Citizen, and the Paris Dakar: Nikon.

We’ll save the Camel Trophy for another post, as it has a wild history of its own and is often filled with misconception (no, Mitsubishi did not compete in a real Camel Trophy event). Because this is about a race edition for which Mitsubishi actually competed, and won in. The Paris-Dakar. A quick primer for those not familiar, by 1987 Mitsubishi was competing in its 9th Dakar, a race where it would take 3rd place overall and secure its 3rd podium win in 4 years. The series was ramping up, more attention was being drawn to it, and to Mitsubishi who in 1985 became the first Japanese manufacturer to get the overall win.

So it seems like a no-brainer that a commemorative edition would come. And one did, in 1987.

The Kenjiro Kit as Mitsubishi called, and named after Kenjiro Shinozuka it was available for the 1987 model year as a pretty standard package. One that undersells what Shinozuka had accomplished in his early transition from WRC to the Dakar. A skid plate and brush guard on the front, livery on the sides, and a commemorative grill plaque speaking to the Dakar. 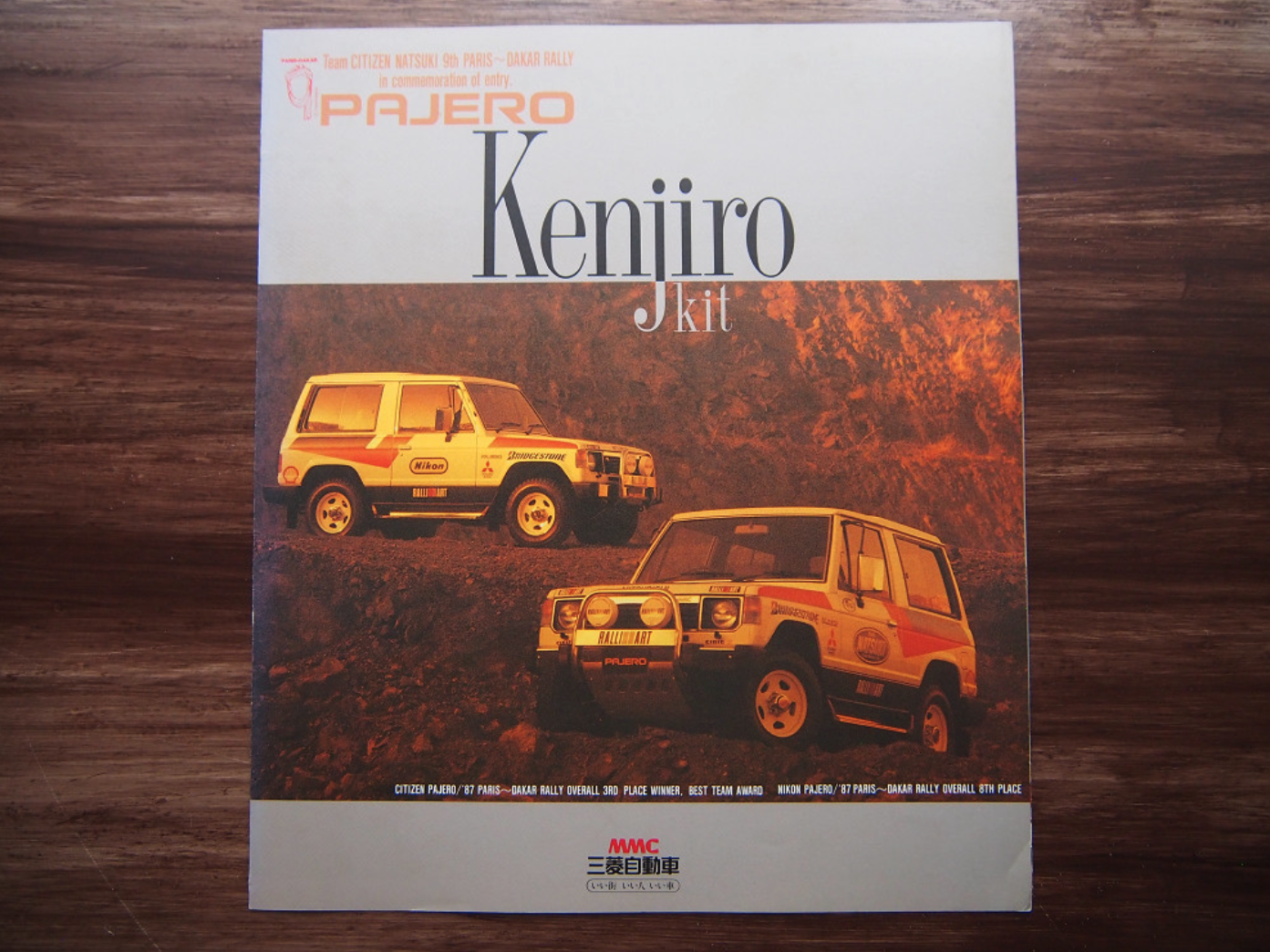 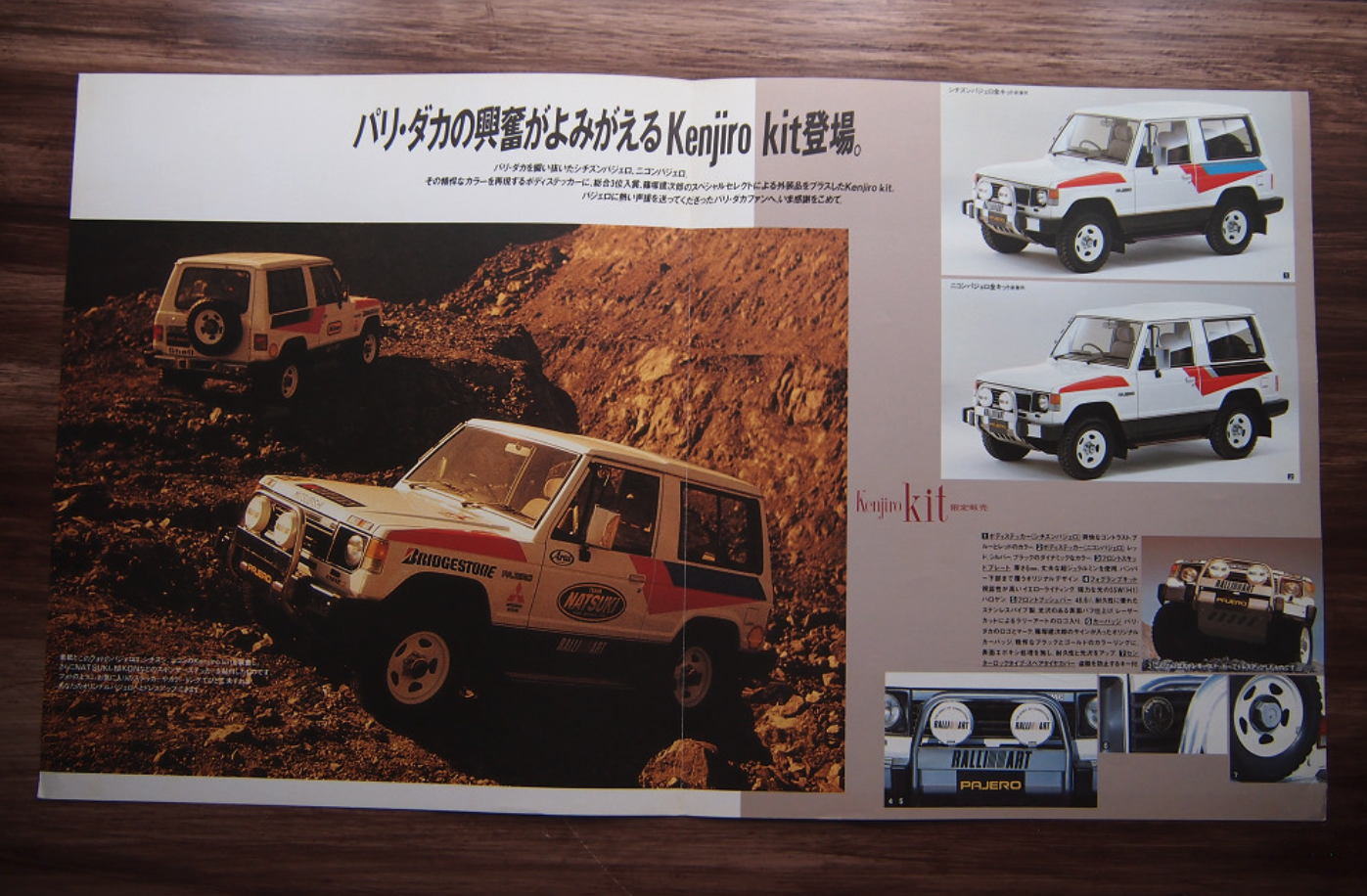 But the 1988 model pushed it to another level. The first real introduction of the 1988 Pajero Paris-Dakar Edition to the lexicon of the internet came by the way of a 2018 Bring a Trailer Auction, in which a 36,000-mile example sold for over $22,000 (full disclosure, many of the images used in this article are from that vehicle auction). At the time, it was cool, but was it that cool? There were interesting components, but was it really a true Mitsubishi special edition? The wheels looked like most period 4wd wheels, the graphics were similar to the Dakar models but not identical, and the commemorative dash sticker had a typo in it “Category IV-2(Dissel Class)”. A typo we’d later go on to include in our reproduction of said sticker. 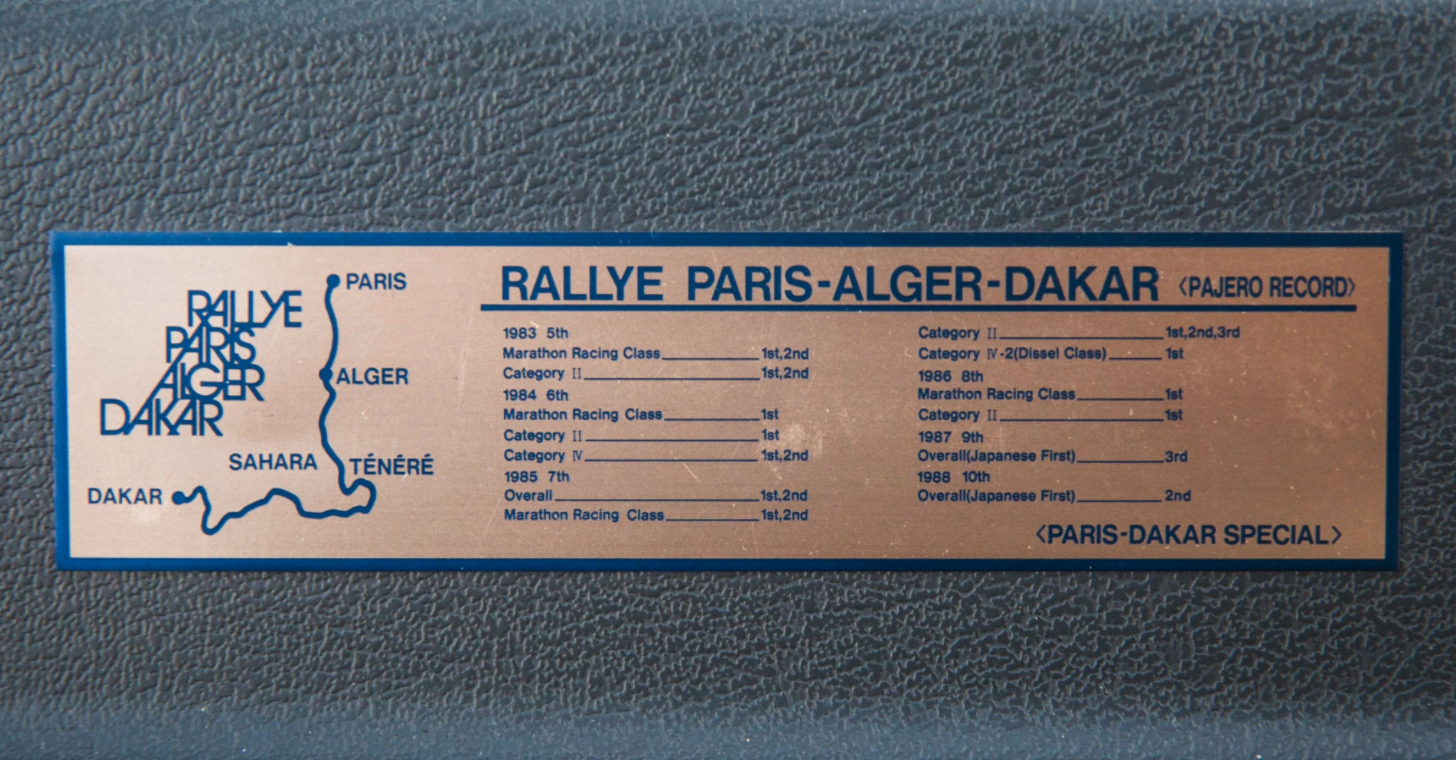 As all things go, you forget about vehicles and editions and inconsistencies until you don’t. And in May of 2021 two Mitsubishi Dealer brochures popped up for sale that would not only validate the BaT auction but shed a lot of light on this edition. The first we touched on above. 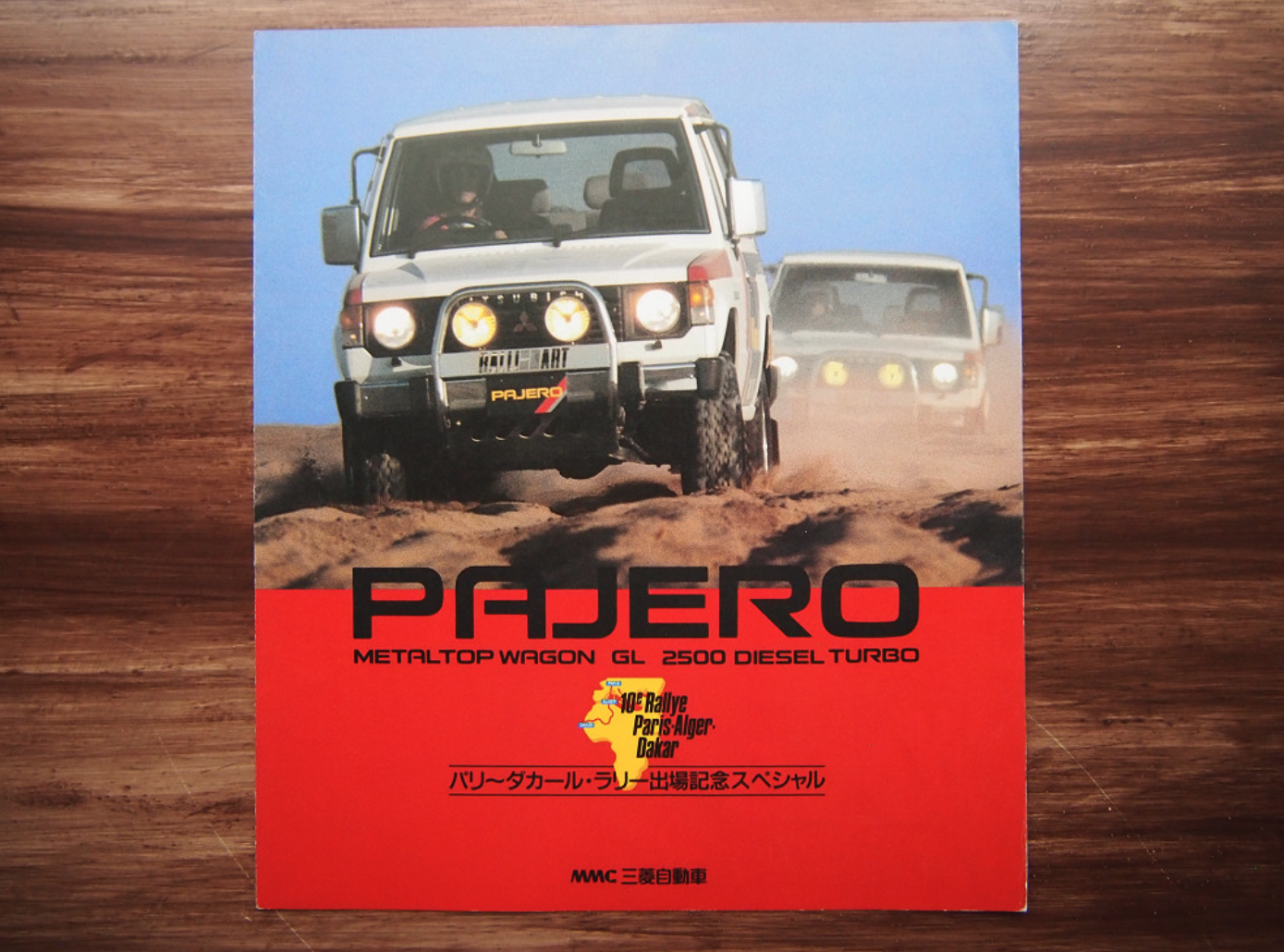 Then just last week, a friend of ours Rob, slid into our DMs with this Kijij link (screenshot below in case the ad goes down). It was the final piece of the puzzle, showing that not only did the Nikon variant exist in the wild, but the Citizen one did as well. And while not quite as clean, or low of miles (150,000km on the Citizen), it takes these editions out of the realm of curiosity and firmly plants them in reality.

“Paris Dakar Rally participation commemorative special” the brochure cover reads underneath a logo of the 10th annual race. It also makes clear the single-engine option: Mitsubishi’s 2.5l ‘Cyclone’ Turbo Diesel used in the Pajero and Delica of that era. Even from this limited view, we see the Citizen model in the front (one of Mitsubishi’s primary Dakar teams from this time) with some of the accessories you’ll receive. A unique bullbar with RalliArt stamped out, fog lights, skid plate, seats, and a graphics pack. 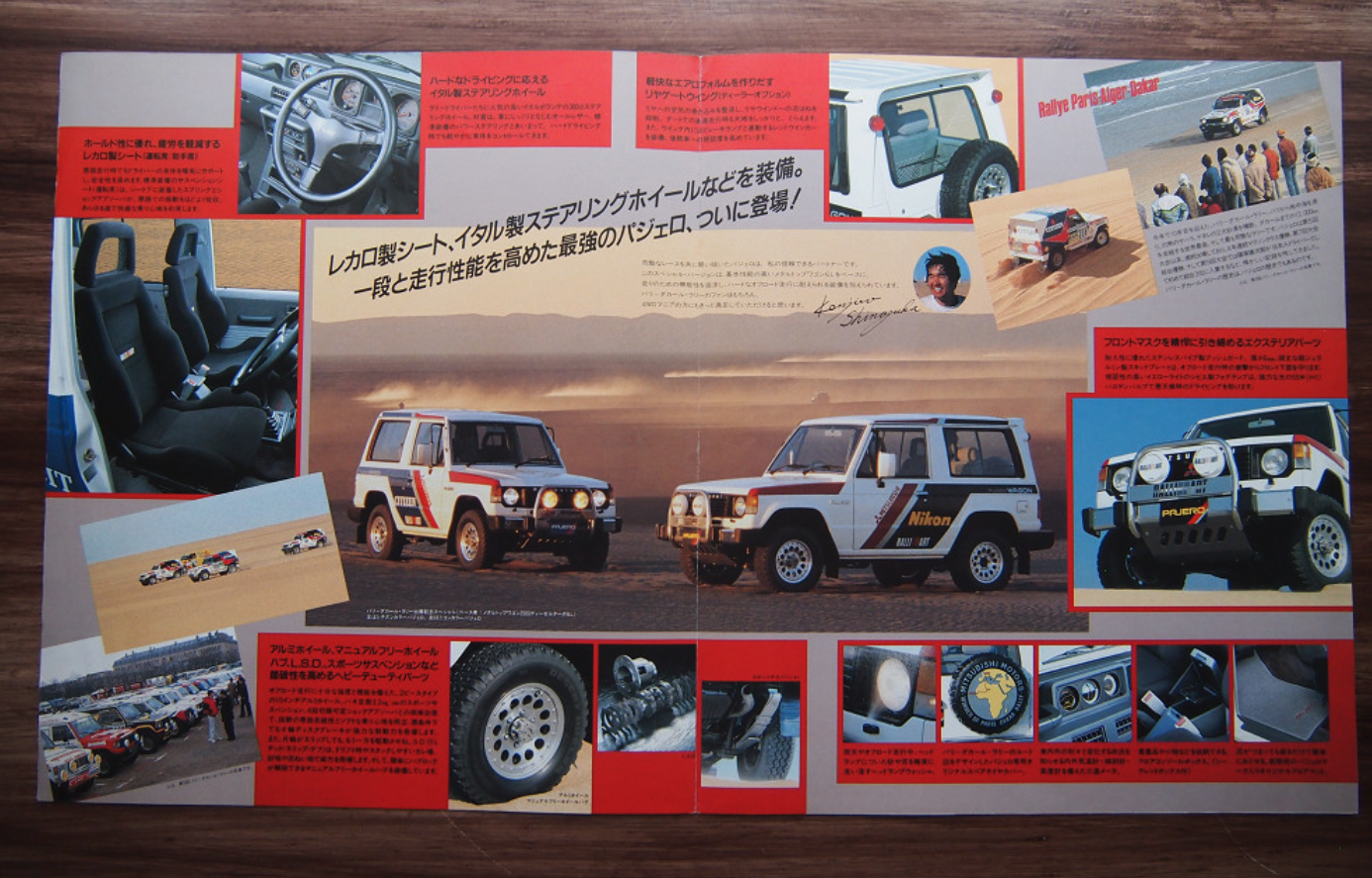 Open up the brochure and you’ll see what is really included. At this point, I just want to say it’s unfortunate that we weren’t able to secure these for 4x4ward’s Archive. If we had, we’d be able to get better details than the high-level overview. But even so, I’ll take it, crediting the seller with posting interior photos. Many times when this old ephemera pops up for sale it is a cover shot only.

Smack dab in the middle we see the two livery options available to prospective buyers. Portions of this color scheme were painted on and must have taken some serious work to perform. However, based on the Bring a Trailer auction not having the ‘Nikon’ graphic that should have been seen on each quarter panel, some of it may have been decals, or that specific car was just painted over. Some things are hard to pinpoint, and playing internet detective only gets you so far until something else pops up for sale.

But with the three pieces we have been able to uncover, the Bring a Trailer listing, Kijiji listing, and Dealer brochure, we’ve been able to put together a good understanding of what was offered. And most of that lies with the accessories a normal Pajero wouldn’t have been afforded.

Using the brochure above as a guide, and moving from the top left moving clockwise, we start with an Italvolanti 3-spoke Ralliart Steering wheel. This wheel is rare in its own right, with the overall design having risen to fame as it delivered Tofu over Mt. Akina. While the Ralliart variant isn’t 1:1, it still suffers from Initial D tax. And if you’re in the market for one, expect to pay in the $700-800 range.

A large rear spoiler with integrated auxiliary brake lights adorns the C-pillar. This sweeping design that hits the beltline would go in to hiding for nearly a decade until the Pajero Evolution debuted in 1997.

Coming around to the front and we see the same Ralliart Brush Guard with auxiliary lighting used in 1987 (the same skid plate is under there as well). While the covers have gone missing on the Bring a Trailer auction, they would have been white with the Ralliart logo as well.

And while the engine is no different than what was offered in standard models at the time, Mitsubishi did opt to include a rear LSD in each of this edition. Coupled with the ‘locking’ center diff, this would have made it very capable right off the showroom floor if you so desired.

The wheels involve a little speculation. It’s very likely these were made by Enkei. Mitsubishi had contracted with them in this era to produce OEM wheel options for the standard Pajero and Delica. We also know that Enkei produced some wheels for Ralliart at the time. Considering the similarities in design to the Enkei Hurricane’s and Mitsubishi Phone Dials, it’s very likely these multi-piece wheels were from them as well.

And while plenty of owners have swapped in Aisin Manual Hubs to their Pajero, this time Mitsubishi did it for you. An interesting detail considering most models, and even the Dakar edition one year earlier, would have come with the standard Auto-Lock hubs.

And lastly, you get back to the interior with the RalliArt Recaro seats for both driver and passenger. Sitting on the typical Mitsubishi Pajero suspension rail, owners have said they offer a lot of comfort despite the aggressive bolstering. In putting this piece together, we tried to find a little more information about these and came up a bit perplexed as they’re a mish-mash of seat types. With the LSC back and base, but an LX headrest. 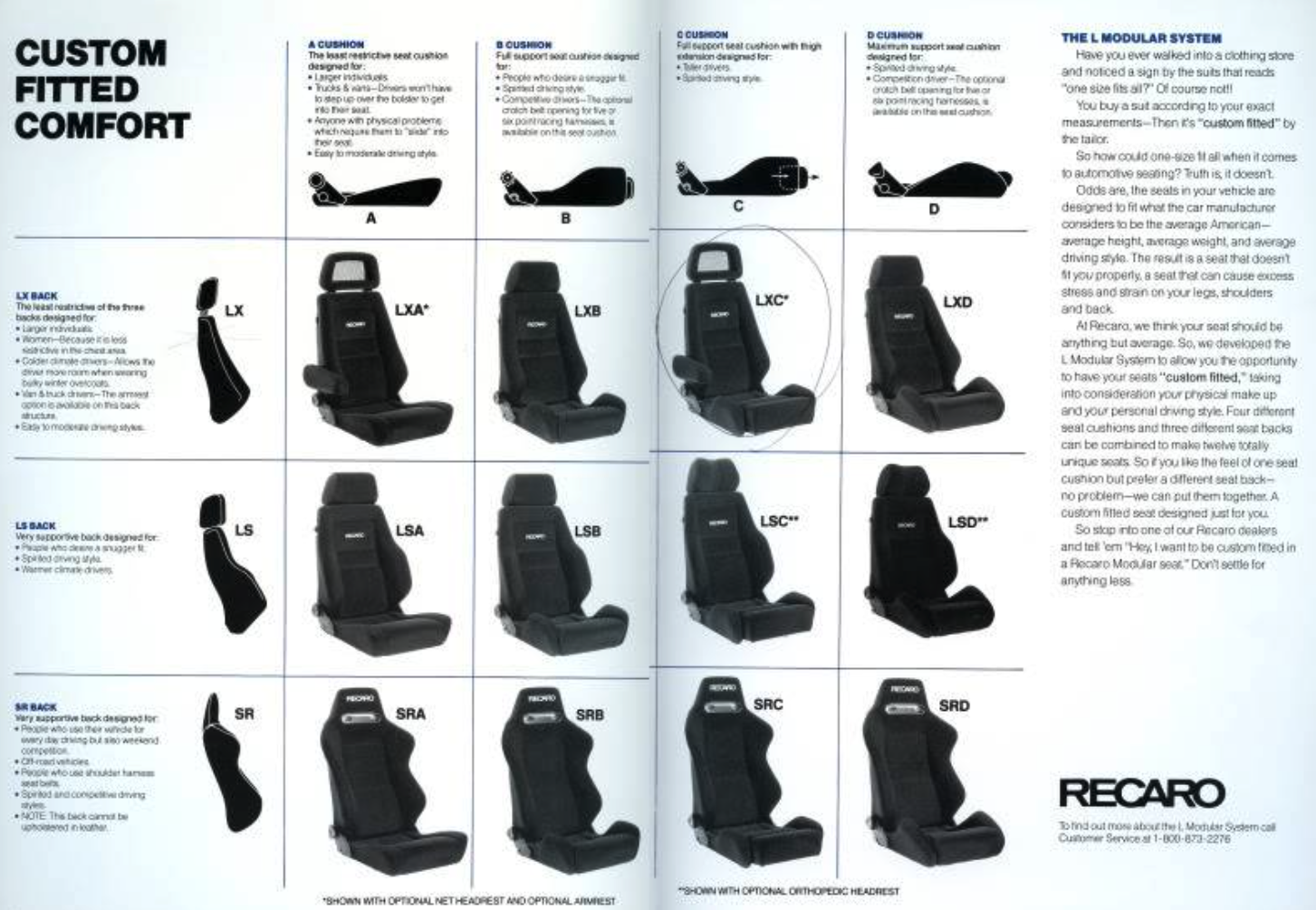 The last big question is, how many were there? Some Mitsubishi editions were vocal in their production run. My Delica Chamonix was 500 units, the 1993 Chamonix was 2,500. And this Hooniverse piece on the Camel Trophy Edition mentions 150 of those were made. So despite having access to these documents, they’re not quite high enough resolution to make out if the actual numbers were stated anywhere. But an educated guess would put them in the 100-200 range of both colors combined. 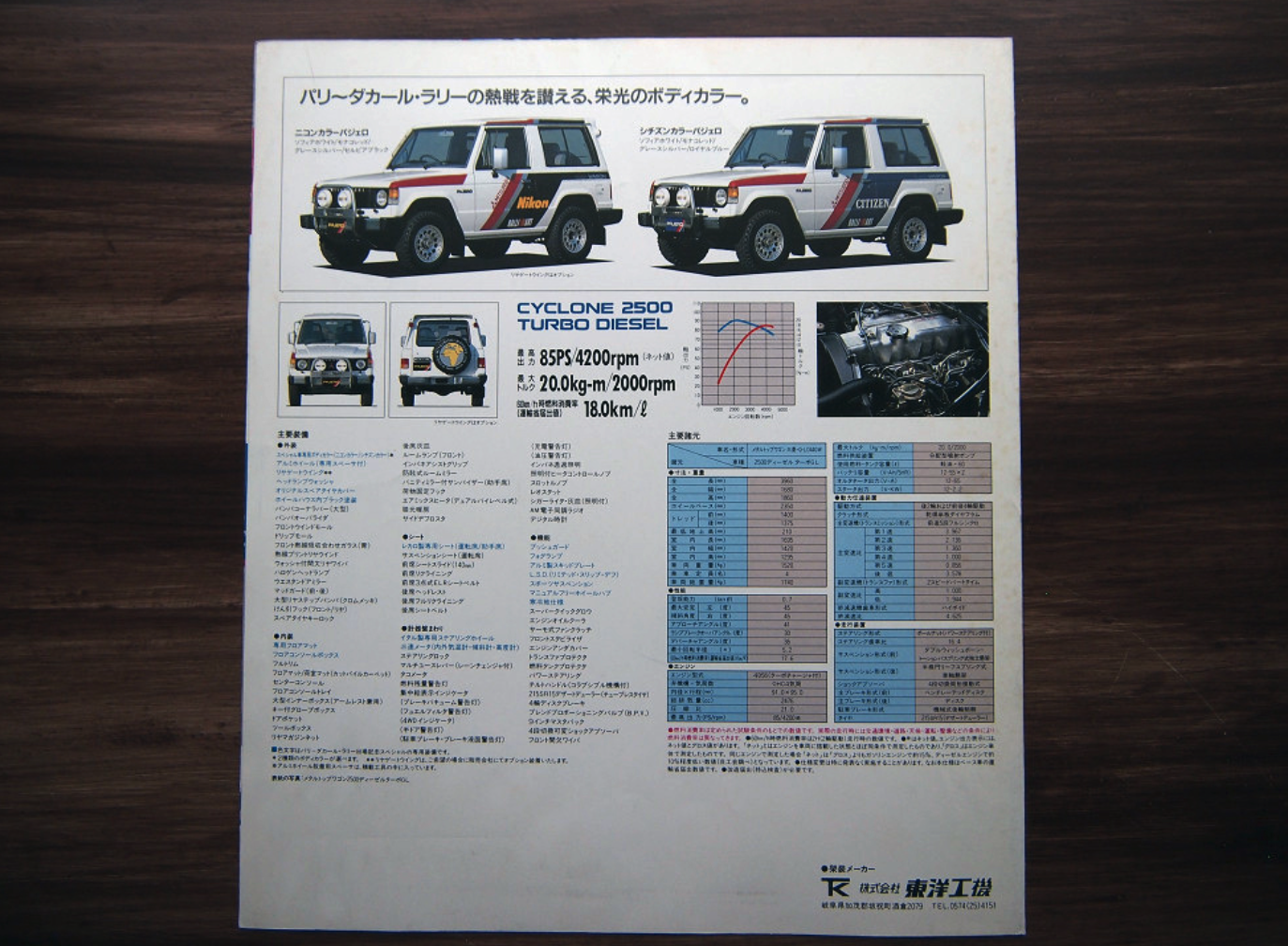 The 25-year import rule to the United States has given us access to a lot of fun new vehicles we haven’t been privy to. But equally important and often overlooked is it’s opened up the internet to a wealth of information. Documentation like this isn’t often easily accessible, it’s tucked in a glove box of an imported car, or buried on a Japanese forum from 2002 at 240p.

It’s impossible to rewind the clock, but maybe if this information, if these brochures, if the total production run was available in 2018 for the Bring a Trailer auction, the Pajero may have sold for even more.