Talk to me Goose: the 2022 Ford Maverick has landed

Of all the segments within the auto industry, few have experienced the kind of resurgence that the compact pickup class is having now. It’s a class that’s long been forgotten as buyers flocked to the oversized crew cab pickups that stick out too far in parking spaces. But with more people realizing that large trucks come with annoying drawbacks (I would know), the smaller ones are making a comeback. But even the “smaller” pickups like the Ranger, Colorado, and Tacoma aren’t actually that small anymore. At least not compared to this. Say hello to the 2022 Ford Maverick. It’ll be entering a pattern near you this fall and it’ll be hard to ignore.

It’s a true compact pickup built for people who want the kind of utility and convenience a truck can offer, just not quite as much of it. It trades monstrous towing and payload for fuel efficiency and more manageable dimensions for urban environments. At 199.7 inches, it’s 11.1 inches shorter than the Ranger, 32 inches shorter than an F-150, and a hilarious 50.3 inches shorter than the F-250. But for such a little truck, it offers some huge benefits. For starters: as much as 40 mpg city and 37 mpg combined and an MSRP of $19,995 (excl. destination).

Maverick by the numbers 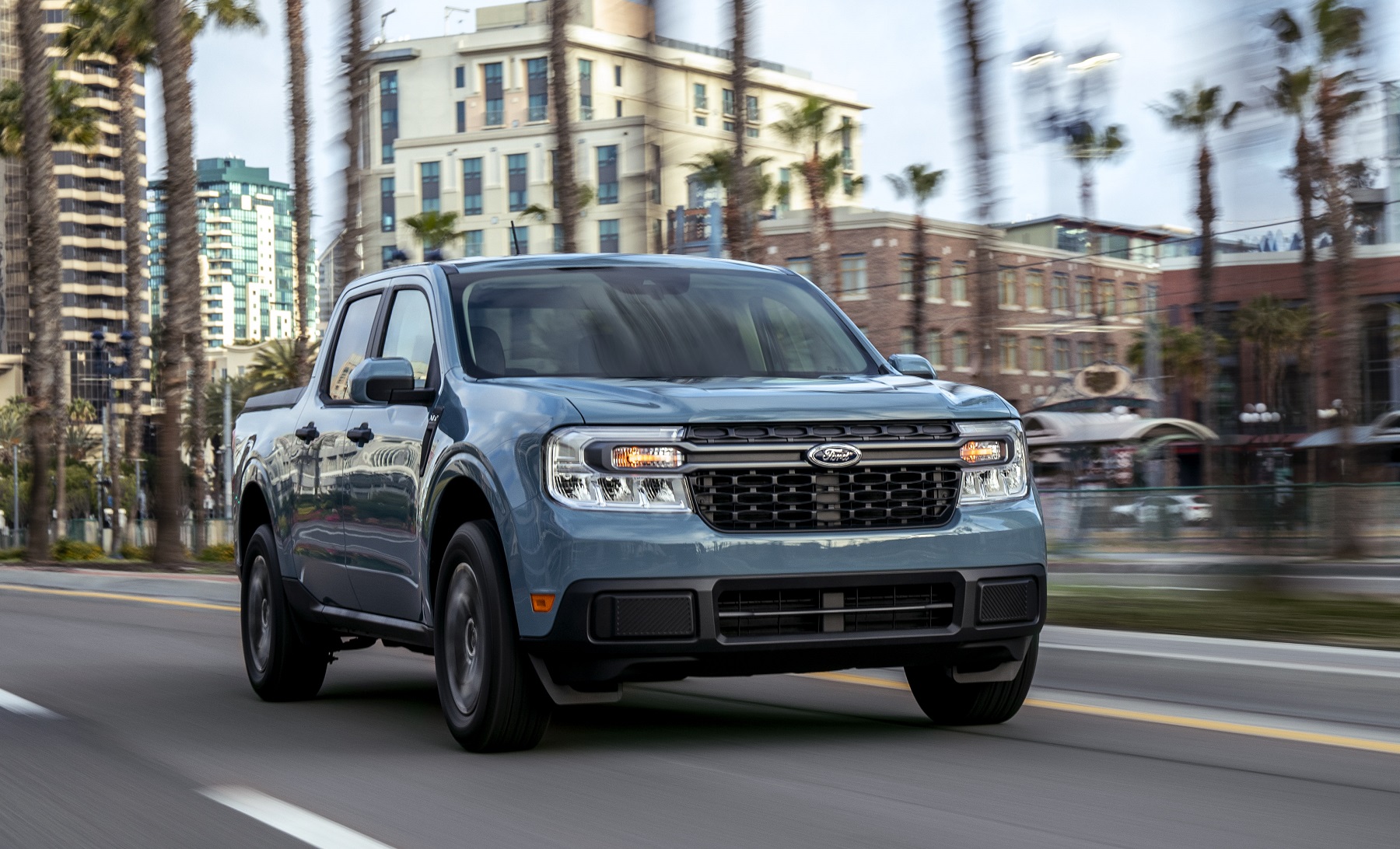 Let me say that again for the people in the back. The Ford Maverick is expected to offer 37 mpg combined and up to 40 mpg in city driving. Its combined mpg should be about the same as the most fuel efficient Honda Civic. And it’s not just its petite dimensions making that possible – it comes standard with a hybrid powertrain and it’s the first truck in America to do so. A more powerful EcoBoost powertrain is available as well if you care more about towing and merging at the last possible second. But for the majority of its buyers, which Ford believes will be “people who never knew they wanted a truck”, a hybrid powertrain as standard will be a major selling point.

The hybrid powertrain consists of a 2.5-liter inline-four with 162 horsepower and 155 lb.-ft. of torque on its own with the electric component increasing that to 191 horsepower. It features a single permanent magnet electric traction motor powered by a liquid-cooled battery housed in the passenger side under the cabin. Power is channeled to the front wheels through a CVT. From a 13.8 gallon fuel tank they say you should be able to get around 500 miles out of it. The math for their targeted 37 mpg combined claim checks out. It can tow a modest 2,000 pounds and carry a payload of 1,500 pounds in its 4.5′ bed. Ford says that’s good for pop-up camper trailers, personal watercraft, and ATVs. From what I can tell that’s about the same amount of towing a small SUV/crossover can manage.

Extra capability is available through an optional 2.0-liter EcoBoost four-cylinder engine with 250 horsepower and 277 lb.-ft. of torque. An eight-speed automatic can send power up front or to all four wheels for an extra fee. To increase towing capabilities you’ll need to opt for the 4K Tow Package. As the name suggests increases towing to 4,000 pounds, which Ford says is enough for an average 21-foot boat. Target mpg figures for this specification have not been revealed.

Regardless of which engine is chosen they won’t need to be working all that hard. Base curb weights range from 3,563-3,731 pounds. That’s less than my Mustang. 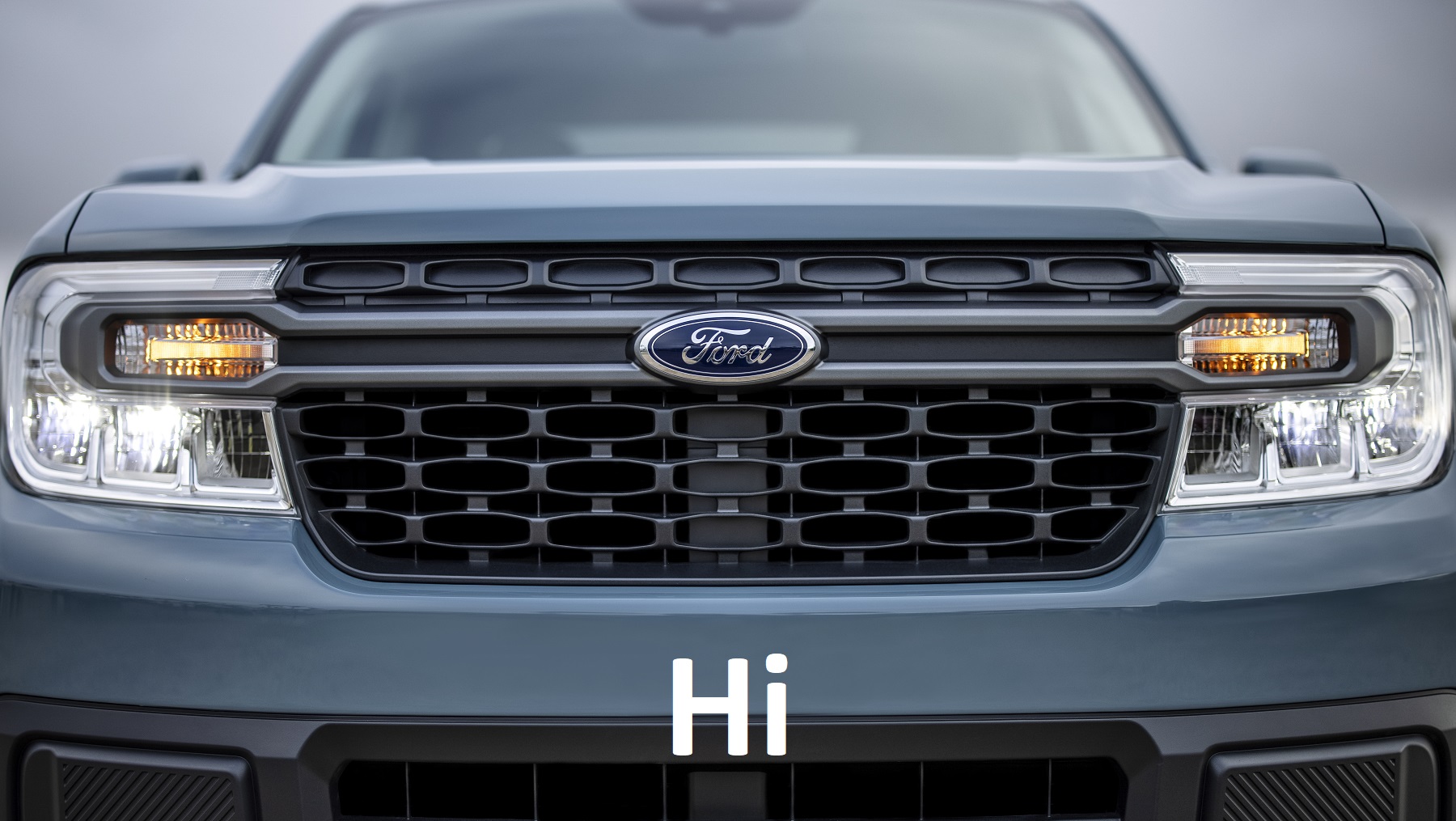 As mentioned earlier it’s not a very long truck. It’s just 3 inches longer than a Honda Accord. It’s also fairly short at just 68.7 inches tall and it’s a hair thinner than the Ranger at 72.6 inches (excl. mirrors). These dimensions should make it significantly easier to park than just about any truck. Its 40′ turning circle, which rivals some smaller sedans and hatchbacks, will also be of good use.

One thing I’m sure will generate a lot of discussion is its styling. It’s certainly not as busy or eye-catching as the stunning Hyundai Santa Cruz but it’s not exactly offensive either. And in modern automotive design, inoffensive can be a win. It looks a fair bit different from other Ford trucks as it embraces the more boxy squared off look of the Bronco Sport. That’s largely to help with space efficiency but also to help make it look “youthful and athletic”- clean, not overdesigned”. The front features standard LED lighting and a prominent grille and cross bar connecting the two. It doesn’t have the signature Ford drop-down side windows but it does have the spot for it molded into the door’s body lines. There’s no gap between the cab and tailgate and the bed rail caps extend from the bed and go vertical, ending at the top of the back window.

XL, XLT, and Lariat trims are being offered which can alter the appearance and of course come with their own set of features. An FX4 package is available for AWD XLT and Lariats for those who want a little more off-road capability with underbody protection and all-terrain tires. For the first model year a First Edition package will be offered too. This is a Lariat model with unique graphics on the hood and lower doors, a high-gloss black-painted roof, soft tonneau cover, and other gloss black accents.

More luxurious than a Tomcat 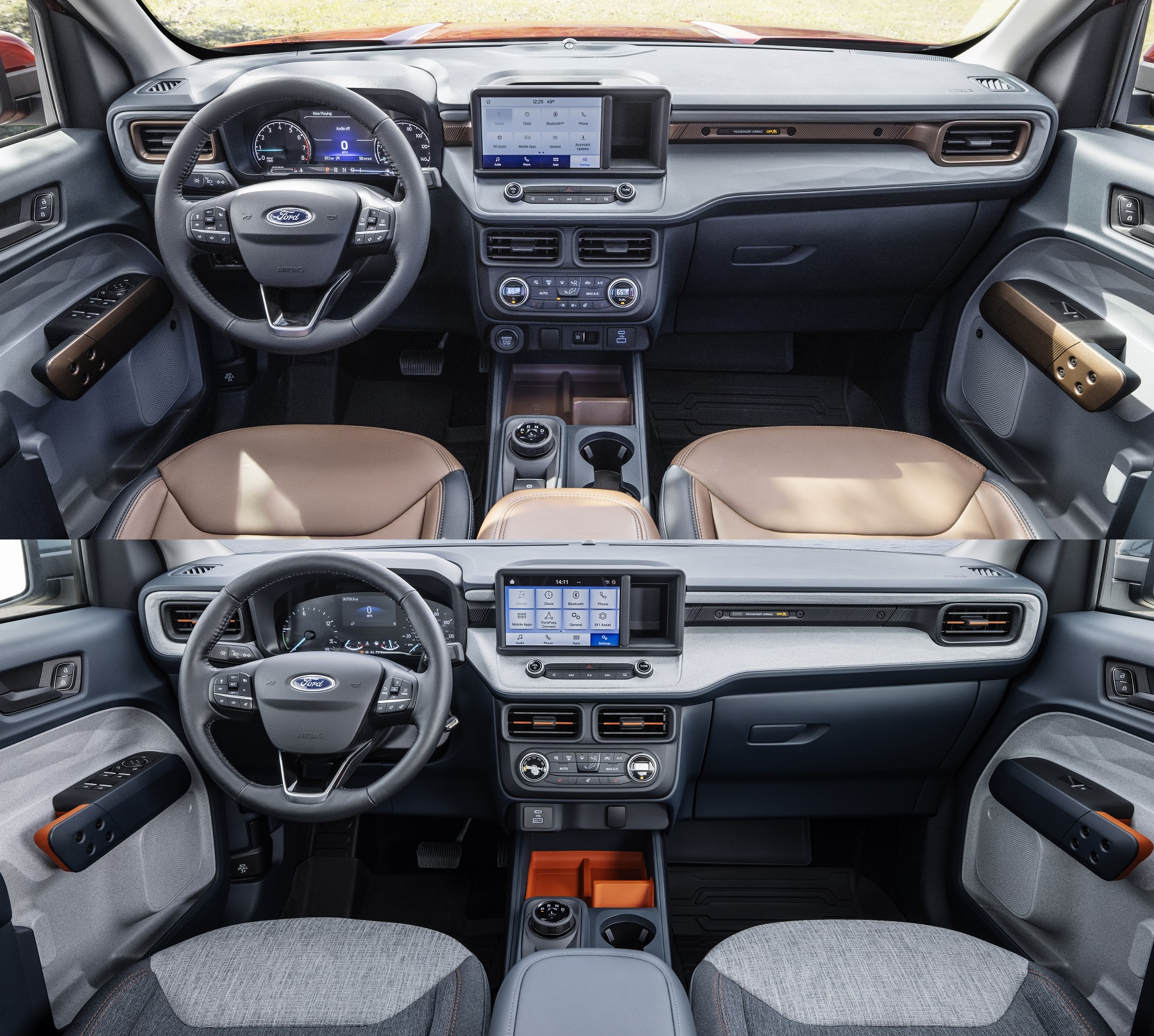 The Maverick’s interior looks fairly modern and unassuming at first glance but it gets a little quirky the more you look. It’s a very detail-oriented interior with some neat storage solutions and surprisingly spacious accommodations. For example, the door inserts are a split design which allows for a one-liter water bottle to sit upright in a bin without rolling around. The pockets offer enough vertical clearance to stash a tablet or notebook and a storage bin under the rear seats allows for ample out-of-sight storage.

There’s no AWG-9 radar to let you Fox 3 into a furball, but it does have the standard range of Ford infotainment and connectivity features. A standard 8″ center touch screen supports Apple and Android mirroring and an onboard hot spot that can support up to 10 devices. Ford Cop-Pilot360 tech, such as pre-collision assist with automatic emergency braking, is standard. Adaptive cruise control with stop-and-go and blind spot information with cross-traffic alert is available on higher trims. It can also be equipped with lane keep assist plus evasive steering assist if you’re a shitty driver. 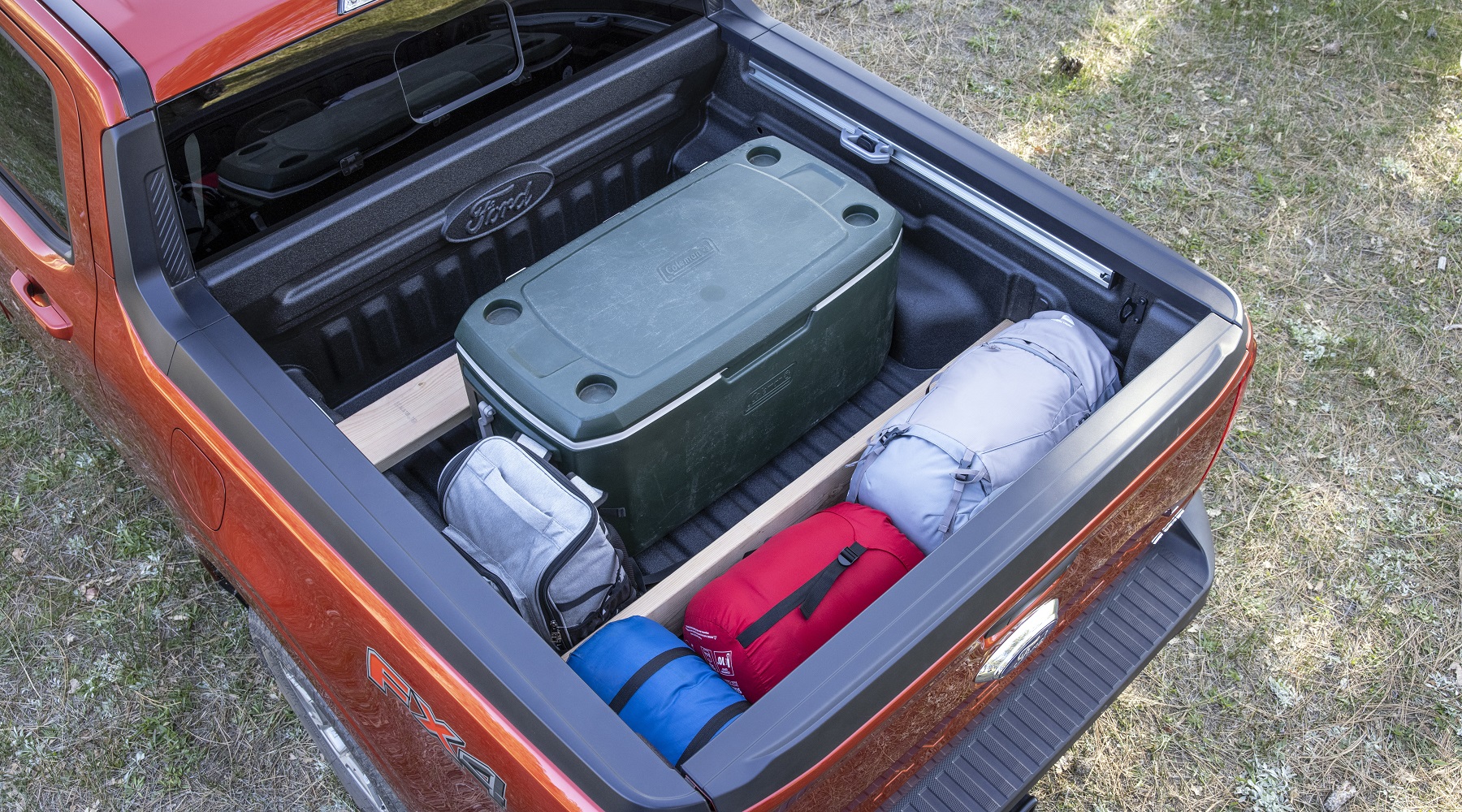 The creative storage solutions don’t end there. Both the cabin and the bed are designed to support custom accessories and personalized storage spaces. Ford studied how people would struggle to load SUVs and cars at home improvement stores or while packing up a kid for college and figured out a way to make all of that a little easier.

They call it FLEXBED and it offers features and opportunities to transform the 33.3 cubic feet of cargo volume into exactly what it needs to be. Buyers can create segmented storage, elevated floors, bike and kayak racks, and more. The side of the bed has integrated slots for sliding 2x4s or 2x6s to create dividers or racks with. There are two die-downs, four D-rings, and built-in threaded holes in the sides to bolt in whatever you want. Prewiring for a standard standard built-in 12-volt electrical line has been integrated into the bed as well with a removable cover on either side of the bed. Its on its own fused circuit to keep the vehicle’s primary electrical systems safe. There’s of course larger 120-volt 400-watt outlets – one in the bed and one inside – that can be equipped as well. 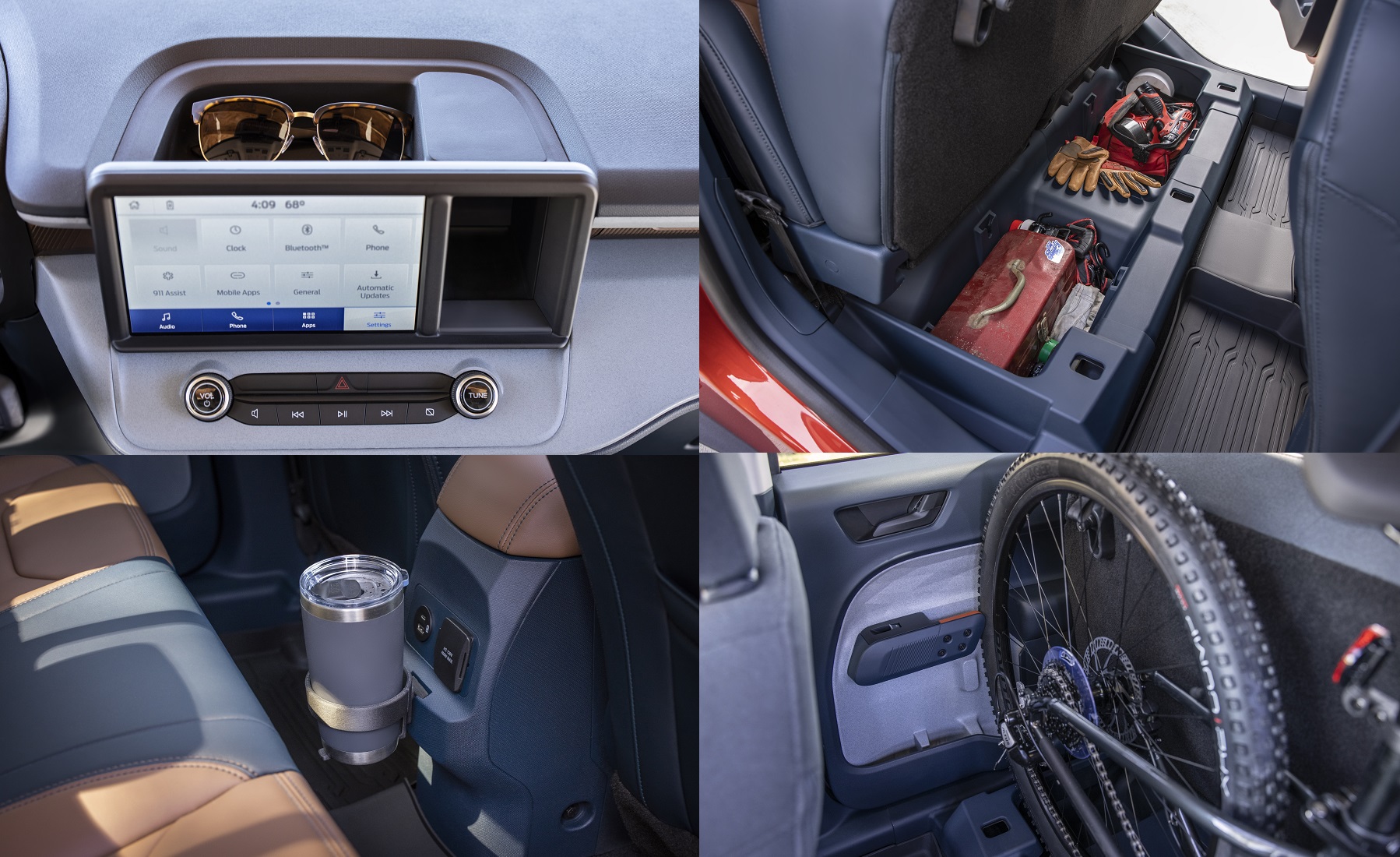 Maverick’s party tricks aren’t just limited to the bed. In the second row of the cabin is another new thing called FITS – Ford Integrated Tether System (pictured above – bottom left). It’s a slot at the back of the front center console which can accommodate different accessories. This could be a pair of cupholders, storage or trash bins, a cord organizer, hooks for grocery bags and purses, and under-seat storage dividers. Ford is still working on a wide range of said accessories to make something for everyone. They even plan to release the slot’s geometry so people can 3D print their own accessories. I’m sure this won’t be abused.

The Maverick is entering a target rich environment

As America continues its love affair with the pickup, these kinds of trucks should prove to be quite attractive to basically anyone who doesn’t live in the Texas back country. We have no shortage of other trucks that can offer good capabilities – better capabilities than this – while not being so big that drivers question life at the mention of having to go downtown. But no other truck that I’ve covered here on Hooniverse has been quite like this. It’s small enough to go anywhere. It’s not completely terrible at towing. There’s enough space for what the average person would need to carry. And it has insanely good fuel economy while starting at about $20k. In fact, from what little research I can do at 1AM, it’s one of if not the cheapest hybrid you can buy in America.

It’s easy to find things that the Maverick can’t handle with its glaring limitations. But if Ford is targeting buyers who didn’t know they wanted a truck, this will be able to handle just about anything they can throw at it. What it lacks in space and payload it makes up for with a plethora of other benefits that are hard to ignore.

What do you think? Has the Ford Maverick caught the three wire or did it bolter?

Update: shortly after the embargo lifted, Ford’s configurator tool for the Maverick went live. Some additional pricing info comes with it. The 2.0-liter EcoBoost is a $1,085 option on all trims. AWD is a $3,305 surcharge on XLT and Lariat. XLT starts at $22,280 and Lariat’s MSRP is $25,490. All MSRPs quoted don’t include destination charges.