[Ed. note: Tanshanomi brings us another story for Two-Wheel Tuesdays. Do Japanese cruisers fit your fancy?] 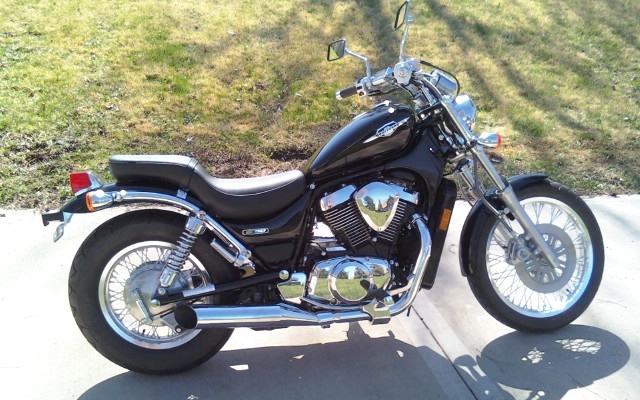 The VS800 Intruder/S50 has been around for just shy of a quarter of a century. Over that time, it went through several iterations and wore various names, but all of them are remarkably similar. Nowadays, it’s definitely a throwback to an earlier time. But that is — in most ways — a good thing.

In the early 1980s, Japanese manufacturers offered “customs” that were simply cruiser-esque versions of their existing UJMs with cruiser styling, including pullback bars, peanut tanks, fat 16″ rear tires and stepped seats. They were otherwise mechanically identical to their “standard” models, and offered a very similar riding experience, just (ironically) a bit less comfortable. Customers demanded cruisers that looked and rode more like Harley-Davidsons. In other words, they wanted the feel of a real V-twin.

Suzuki developed the VS750, their first V-twin, just in time to face the Federal government’s 1983-84 import tariff on motorcycles over 700cc. To avoid inflated retail prices, the version that first hit American shores was one of many bikes that year that were hurriedly sleeved down to 699 cc’s.

The Intruder 700 didn’t blatantly copy the Harley styling language. The two cylinders had exhaust pipes on opposite sides of the bike. Each carb tucked above and behind the cylinder it fed, not sharing the space between them.  This arrangement necessitated a semi-perimeter frame. The resultant styling suggested a molded-in custom chopper neck, rather than a factory Harley of the time. 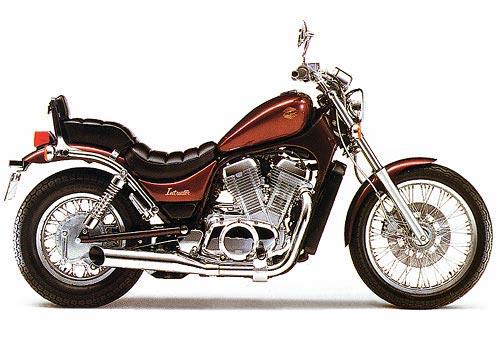 Variations On A Theme

Suzuki initially offered several variants that could be had with spoke or cast wheels, and a choice of either pullback bars or drag bars on risers. When the tariff went away for the 1985 model year, the engine returned to the full 750 cc capacity that the rest of the world had been getting. At that time, the cast wheel and drag bar options went away. A new, similar but larger Intruder 1400 inherited the role of Suzuki’s flagship cruiser. The bike grew to 800 cc’s for its seventh year of production, and then carried on with little more than paint and stripe changes until 2005. Meanwhile, a couple of more accurately Harley-derived 800 cc cruisers arrived: the M50 Marauder and C50 Volusia. The 800 Intruder motor also appeared for several years in a standard sport-touring chassis as the cult-favorite VX800. 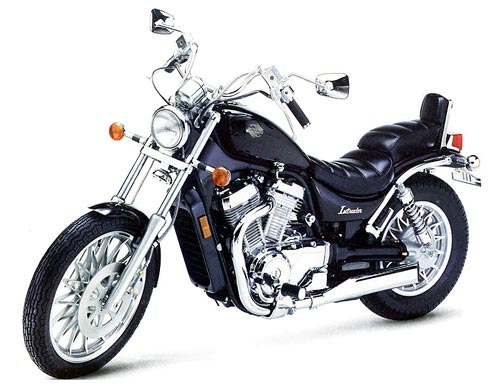 In 2005, Suzuki re-branded their entire cruiser line under the “Boulevard” name. The former Intruder became the Boulevard S50. A firmer, flatter saddle replaced the previous over-stuffed seat. The backrest and short sissy bar went away. The flat drag bars returned. An attractive but totally fake air cleaner appeared on the right side of the engine’s “V,” which really does nothing more than hold the cheesy, nearly useless tool kit.

The “S” in S50 supposedly stands for “sport,” and while the bike is no race replica, it’s appropriate. Not only does the bike look comparatively not much like a Harley nowadays, but by current standards, the S50 is light (under 480 lbs. wet curb weight), narrow, had good ground clearance, and has the lower bars mentioned plus sportier mid-mounted foot controls, rather than the extreme forward-mounted pegs found on nearly all other new cruisers. 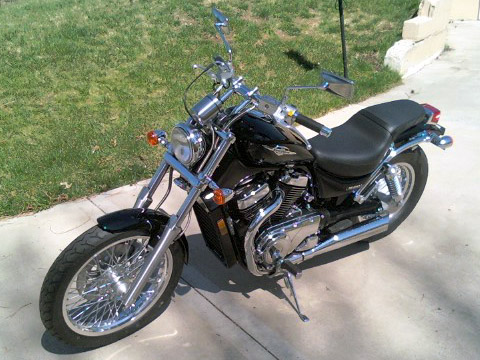 The S50 is clearly out-of-step with the market. Is like nothing else being sold today. The fact that it is still being offered is more remarkable given the many years of previous S50s and Intruders now available used. Unfortunately, the S50 is also a throwback in some not-so-good ways. The steering lock is not integrated into the ignition switch; rather, a hard-to-operate separate lock sits on the side of the steering stem and uses a separate key. The engine still has two rather cold-blooded carbs, rather than the flawless electronic fuel injection found on newer designs. The single-piston front caliper and drum rear brake are rather dated.

Due to the bad economy, Suzuki has chosen not to import any 2010 model street bikes, instead selling off the many ’09’s sitting in dealerships and warehouses. Many models are being blown out with deep discounts from dealers on cycletrader.com and factory-sponsored loans as low as 1.99%. Either Suzuki didn’t import many S50s, or customers who want an S50 know what they want and are still willing to pay for it. I could not find a single dealer offering discounts on the S50. Furthermore, the S50 is only eligible for the good-but-not-great interest rate of 5.99%.

How do I know about these current incentives, and how much do I like the S50? Well, these photos are of the new S50 that I brought home from the dealer on Saturday!

The 2009 model year, predictably, marked the end of the road for the S50. It never returned to the market. I had this bike for four years, and while I genuinely enjoyed it, it didn’t suit the longer, multi-day touring rides my wife and I were taking more and more. The rear suspension could be punishing. Even with a Dynojet Stage One jet kit, the carburetion was never totally clean—certainly nowhere near as smooth as a modern fuel-injected engine. Add in the dated, non-ABS brakes, and it became less than fun. I traded it in on a 2013 Can-Am Spyder RS-S  –Pete