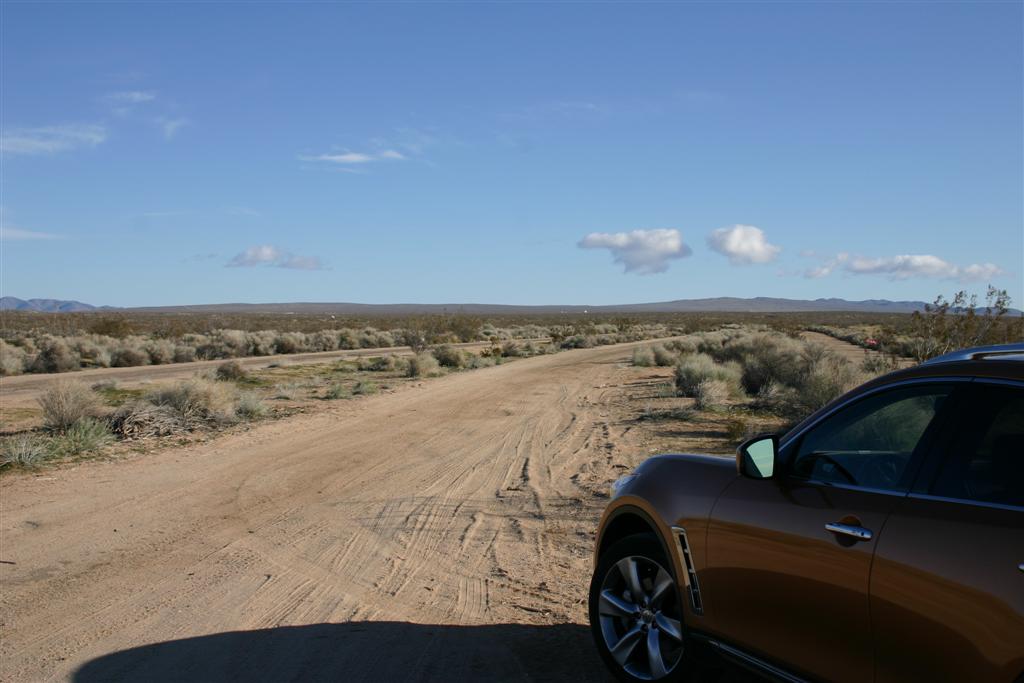 It’s time to move on from ridiculous hoonage back to the real world (for now). After the canyons and the empty streets of California City came miles of long, straight highway.

Tim: Were I asked to drive cross-country in the FX, I’d do it in a heartbeat. The seats are heated and cooled, the nav/audio is top-notch and the 7-speed auto gives a nice, tall overdrive that’ll cruise at 90 and still deliver high-teens MPG. Not bad. A minor complaint: even with shocks out of “Sport” mode, the ride has an unnecessary sharpness, alerting you to every tiny imperfection in the pavement. 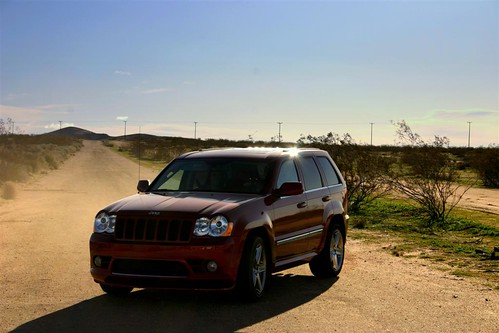 Rob: While its incredible power-on-demand makes the Jeep the preferred highway fighter in my book, I actually prefer the FX for distance driving when taking comfort into consideration. The Infiniti’s seats not only offer more padding than the Jeep, but Infiniti has put that padding in the right places. And befitting its significantly higher price the Japanese contender has more adjustments including rheostat-controlled seat heaters and coolers where as the Jeep is only able to keep your buns warm.
Other features play in the Jeep’s favor, including one of the best audio/nav systems in the business, and the trippiest trip computer performance monitor around. The FX marvels with cameras on each side, providing a top-down view while parked that is wicked cool. 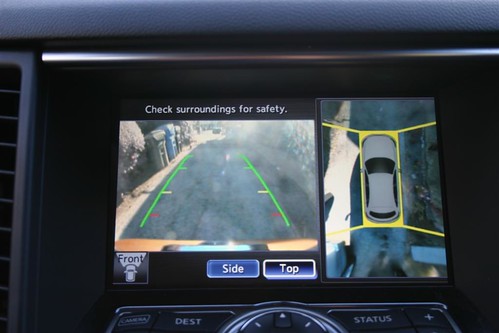 Tim: The top-down camera view is a cool gimmick, but it was never detailed enough for me. Anything closer than about 10 inches, or with a partial shadow on it was impossible to gauge. I’ll use my eyes and the mirrors, thanks.
I was kind “meh” on the Jeep’s AV gettup, but I think that had more to do with my refusal to RTFM and my limited time with it. Unfortunately, I have a very real complaint: the display disappears in direct sunlight, particularly if you’ve got polarized shades on. The FX’s screen is recessed in the dash, so it’s less of an issue.

Again, total agreement on the seats. I was shocked and dismayed at the lack of bolstering, support or adjustability on the Jeep’s chairs. If you’re gonna make special seats for the special go-fast version, the least you could do is match the feature set from my dad’s ’88 Mustang GT. Most luxury interior features fail to impress me, but the cooled seats in the FX, well, I’d gladly pay extra for those. 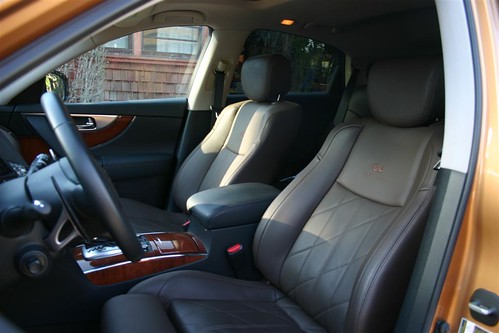 And this is where the price difference between them really starts to show. The Jeep runs about $49k and the Infiniti stickers for about $63k. It seems $15 grand gets you a vehicle where someone thought the whole thing through, while the Jeep feels a bit more like a check list. Big engine? Check. Big stereo? Check. Custom seats with that suede stuff you kids think is cool? Check.
But to be clear, it’s not like the Jeep is really deficient as a vehicle, it’s just that the Infiniti is better. I guess the next question is whether it’s $15k better.
Jeff chimes in: It is $15,000 better from a real world standpoint. The seats are more comfortable, the audio system is better, it gets better fuel mileage, it carves canyons like a (big ass) knife, and it has more than ample power.
The Infiniti FX50s is a daily-driving luxury rocket. The Jeep is a muscle car that shops at the Big N’ Tall store. It is a blast to drive, even more fun than the Infiniti in short bursts. However the Infiniti is a complete package, whereas the Jeep Grand Cherokee SRT8 is almost all engine. I am not saying that’s a bad thing – in fact it’s great to see a car company build a vehicle like that, I just believe I could be happier for a longer period of time with the Infiniti. 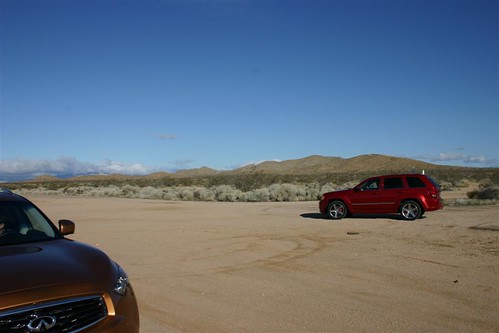 Tim: Fine, I’m not going to argue that you’re getting $15k worth of difference between the Jeep and the Infiniti. But I’m not sure you could get me to pay the difference. The Jeep’s got more room, more utility and it’s faster 90% of the time. For 15 large, you could get a spare car to run the canyons better than either of these. Besides, the Jeep’s plebeian origins are a plus for me, as I know I’ll be able to fix and maintain it for years to come. Not the case with a luxury marque like Infiniti.
I can see the FX making sense in a more formal environment, one where the Jeep is simply too boorish. After all, we can’t wear muscle tees everywhere. That said, the non-German brand and outré styling on the Infiniti might not fly with the typical country club set. Then again, the X6 and CLS are big sellers, so the styling can’t be that big a stumbling block.
Jeff: You’ve just hit the nail on the head…the Infiniti is the car you marry, but the Jeep is your mistress.

Tim: Funny you put it that way, because to me the Jeep’s more the keeper. The Jeep’s not the most graceful or fashionable, but the FX is the classy ladder-climber who’ll leave you broke in the end. The Jeep’s a bit low-brow, but as long as we live in a world with stop lights and on ramps, she’ll never stop being fun.

Press play for our final walk-through and a declaration of the clear winner here.

Yup, so that’s it. In all seriousness, when it’s time to draw a clear winner from the pair, it can’t be done. The Jeep’s cheaper and faster in a straight line, but the Infiniti’s the more refined all-around-er. Both offer fun by the ton, just in slightly different flavors. There are certainly no losers here.

Before we go, we must give a shout out to super #1 Best Friends of Hooniverse Will Novy and Luis Leaño. They tagged along though some ridiculous canyon driving and braved 40+ mph sandblasting winds to get us the footage you see today. They had a great eye for great shots to get, and then edited it all down to something that’s actually worth watching. Just as important, they’re easy to work with. Second thanks goes to Mark Novy, who took many of the pictures you see here.

Lastly, be sure to check out the flickr set of all the shots from the trip, here.