Road trips are an American institution. Our networks of highways, lack of cheap long distance travel, and history of V8 powered land yachts created the perfect environment for travel by car. These days the land yachts may be going the way of the dinosaurs which power them, replaced by more fuel efficient, and smaller cars. However, this may not be a negative thing as the ability to cover long distances in a more efficient manner would hopefully encourage people to get out and see the countryside so-to-speak. With every road trip comes a story and in this segment we are going to share some of our favorites.

Back in July of 2016 my dad, my brother, and I took a three day 1000 mile bike trip up to Monterey and back. At this point in time I had been riding for 2 year, my dad hadn’t ridden in 30 years, and my brother had never been on a motorcycle. All the hallmarks of a Formica family good idea. Unlike your regular roadtrip we couldn’t just jump in the car and head off into the sunset, we had to get a few things sorted first. They needed to get an M1 endorsement, rent bikes, and find gear to wear.

Luckily the Motorcycle Safety Foundation (MSF) has made a vested effort in making the licensing process as easy as possible. Their website lists basic rider courses by zip code making finding one in our area simple and quick. The advantage of taking this course for new and returning riders like my brother and dad is two fold. Firstly, it negates the need to take the on-bike portion of the licensing test at the dmv, so only the written exam needs to be taken day of. Secondly, this meant that they would get a little time on some bikes to practice the fundamentals of riding before we set out. A much needed refresher for my dad, and a chance to build my brother’s confidence before being thrown in the deep end. 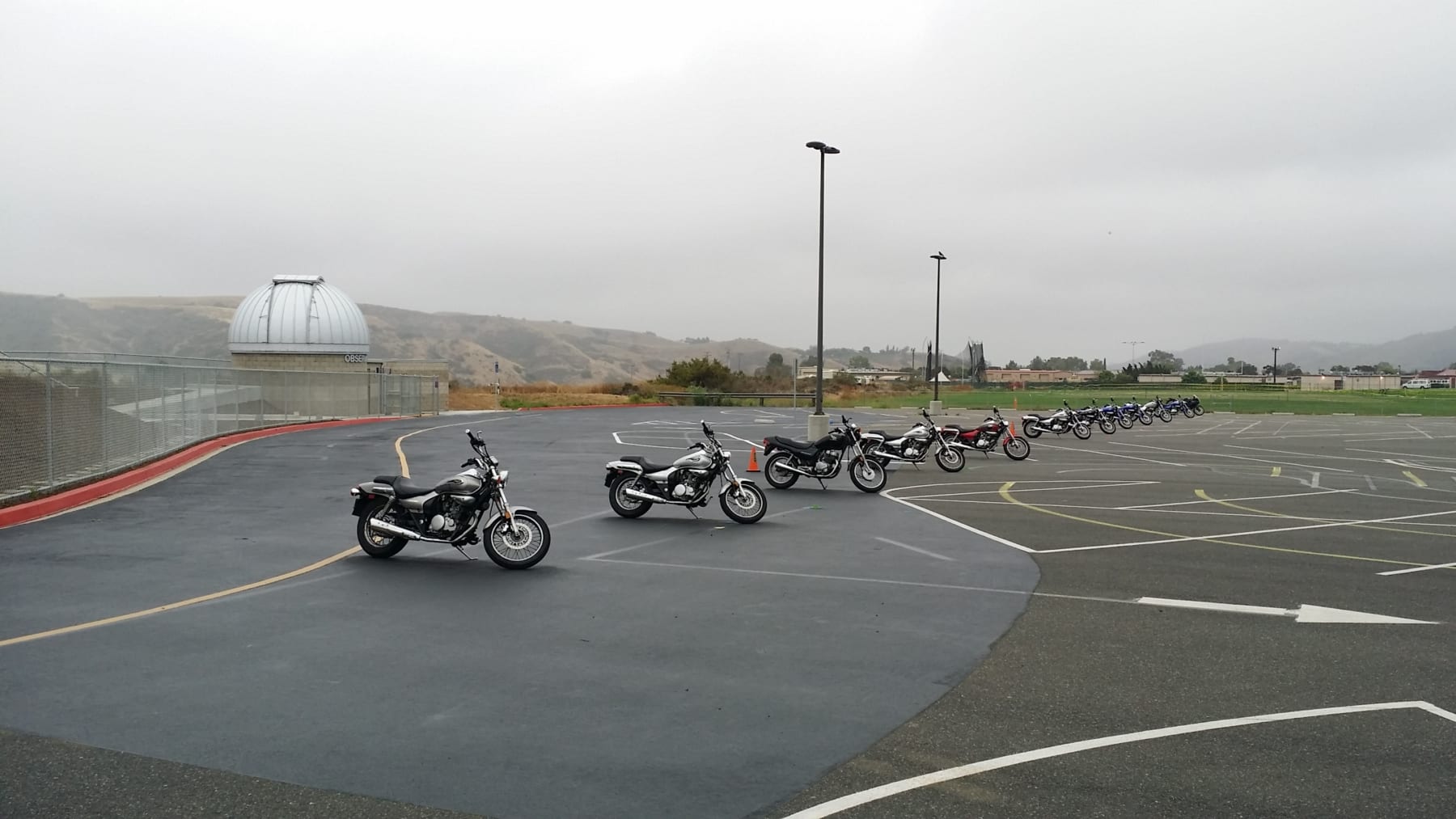 They passed their license exam, making me the ever proud moto-dad, but now we faced the larger challenge of finding motorcycles appropriate to our task at hand that were also fitting for a pair of riders without a substantial amount of seat time. This was probably the bigger challenge since we couldn’t just pop down to Hertz and pick up a bike the way you would a car. In the past we would have had to buy bikes, or ask to borrow some from friends neither of which was an option for us.

Luckily over the last 10 years or so motorcycle rental services have become a little more popular and are giving riders access to bikes they may not otherwise get to ride. With both professional services like Eagle Rider, who have their own locations, partner with a few dealerships, and offer a wide selection of bikes. Alternatively for those who may be turned off with the formality of a rental service or the pricing services like Twisted Road want to do for motorcycles what Turo has done for cars. 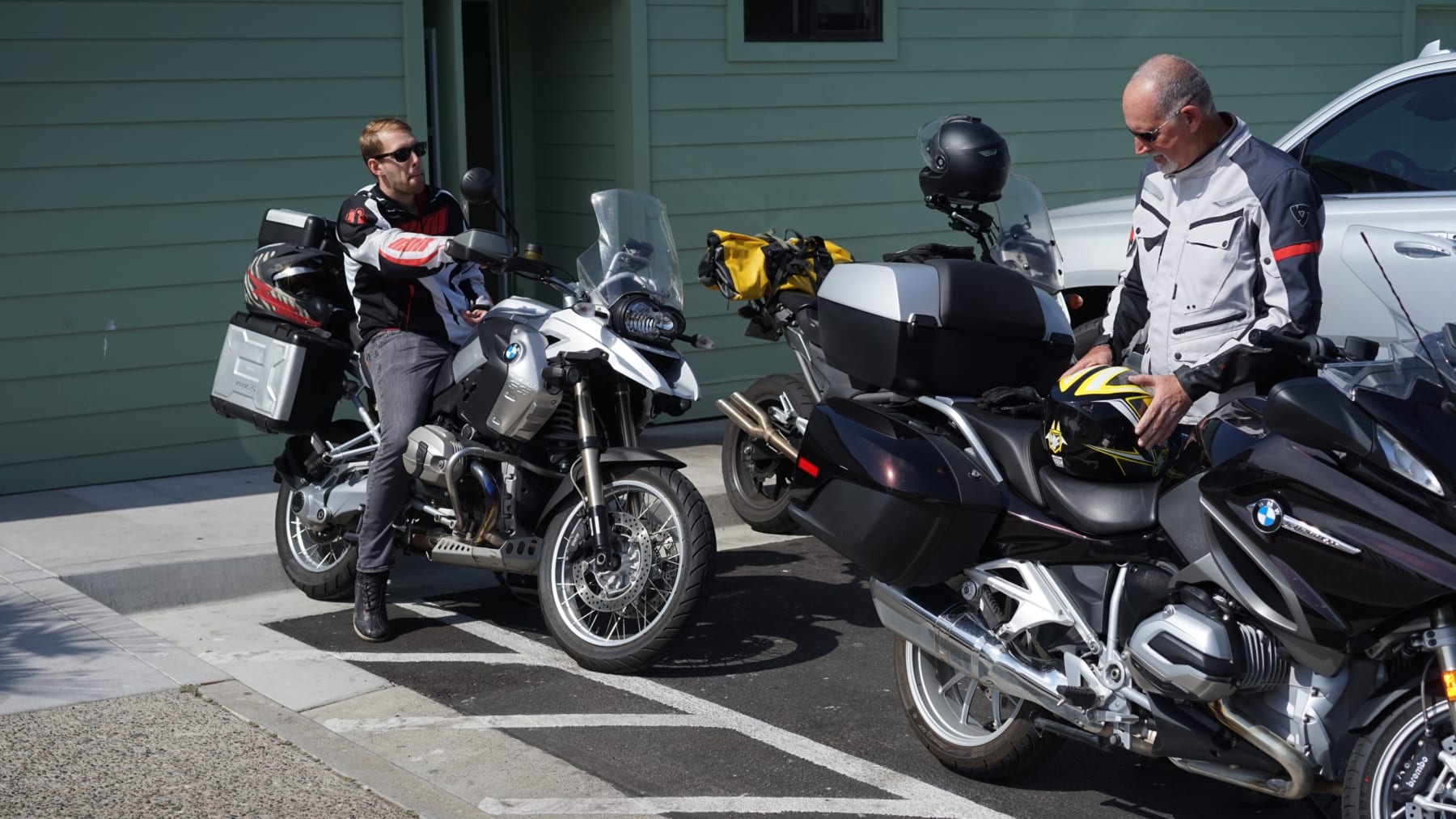 We chose to go with Eagle Rider because at the time it was the largest service and felt the most like a typical vehicle renting experience. The weekend prior to our trip my dad and brother picked up a Honda Nc700x and borrow my bike, also an Nc700x, to practice a little more in some parking lots before we headed up the coast. I met them down the street on my way to work to check in only find that my brother had dropped the rental breaking the clutch lever and was now doing drills on my bike. Not the most confidence inspiring sight, and the exact reason I had told my dad to give him the rental.

All in all, despite my stress it was probably for the best as they would inevitably end up with a pair of bikes far larger and more powerful than my little Honda. 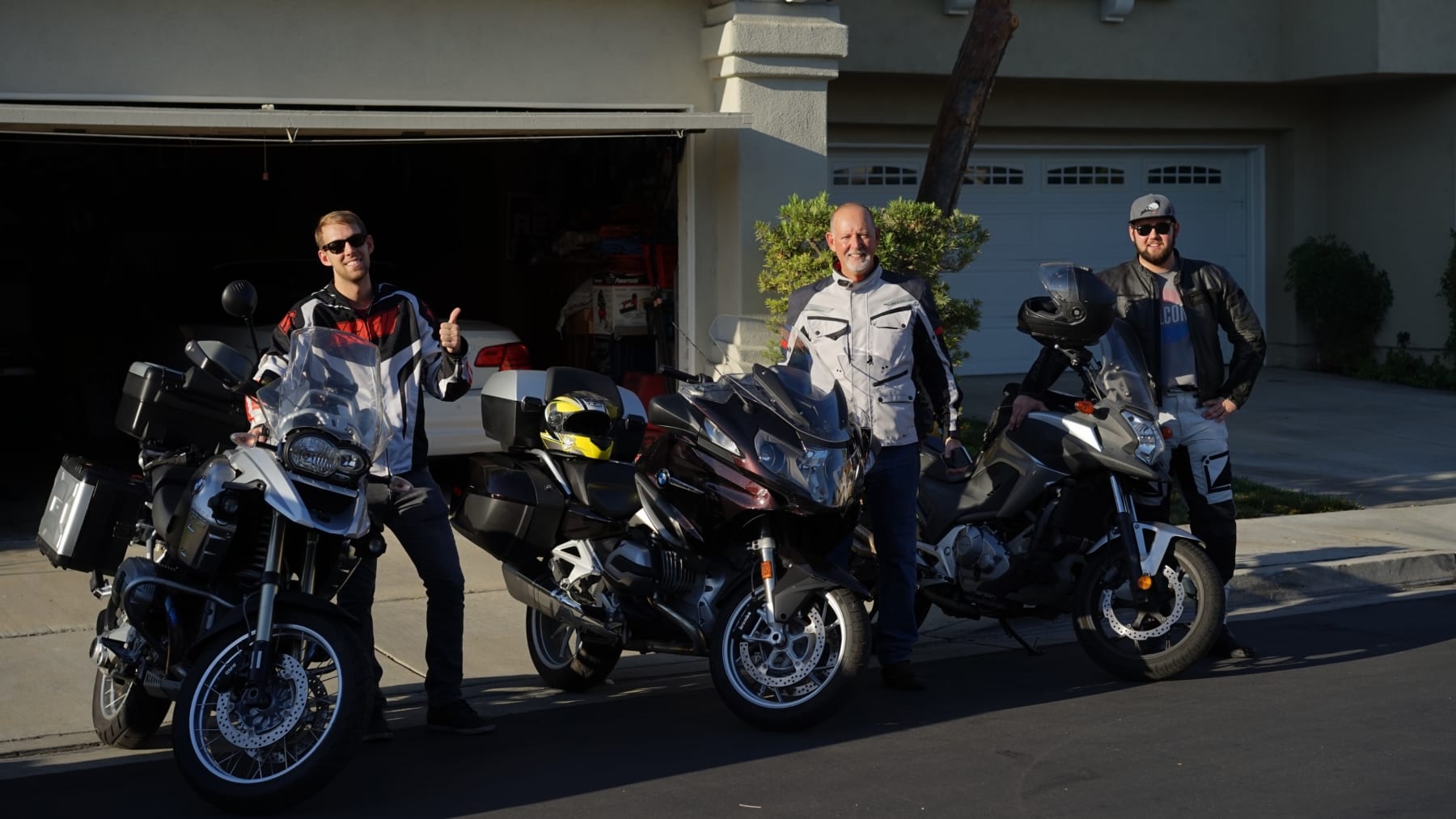 We rented a pair of BMW F800s for my brother and my dad as they had the right ergonomics for a lengthy ride, ABS and other electronic aids to help keep them safe, and the price was right. Although they are a fairly big bike for new riders my dad felt confident they were the right choice for him and my brother. When we drove out to Murrieta to get them only to find out they had been given to another group we were dismayed. Although finding out the reservation we had made wouldn’t be honored was inconvenient to say the least, I have to give credit to Eagle Rider who offered to upgrade both my dad and brother at the original rate.

While having access to a pair of higher end bikes is on its face a good thing, considering that my brother had a total of four hours of seat time the idea of a bigger, heavier, more powerful bike actually wasn’t ideal. We ended up with a 2007 R1200 GS for my brother, and a 2014 R1200 GT for my dad. Both bikes that made the original F800s we planned on renting look diminutive by comparison.

With the licenses in hand, and the bikes sorted the last step was to kit my brother and dad out with some gear to make sure we were safe on our trip. Luckily by this point I had already accumulated my fair share of gear. 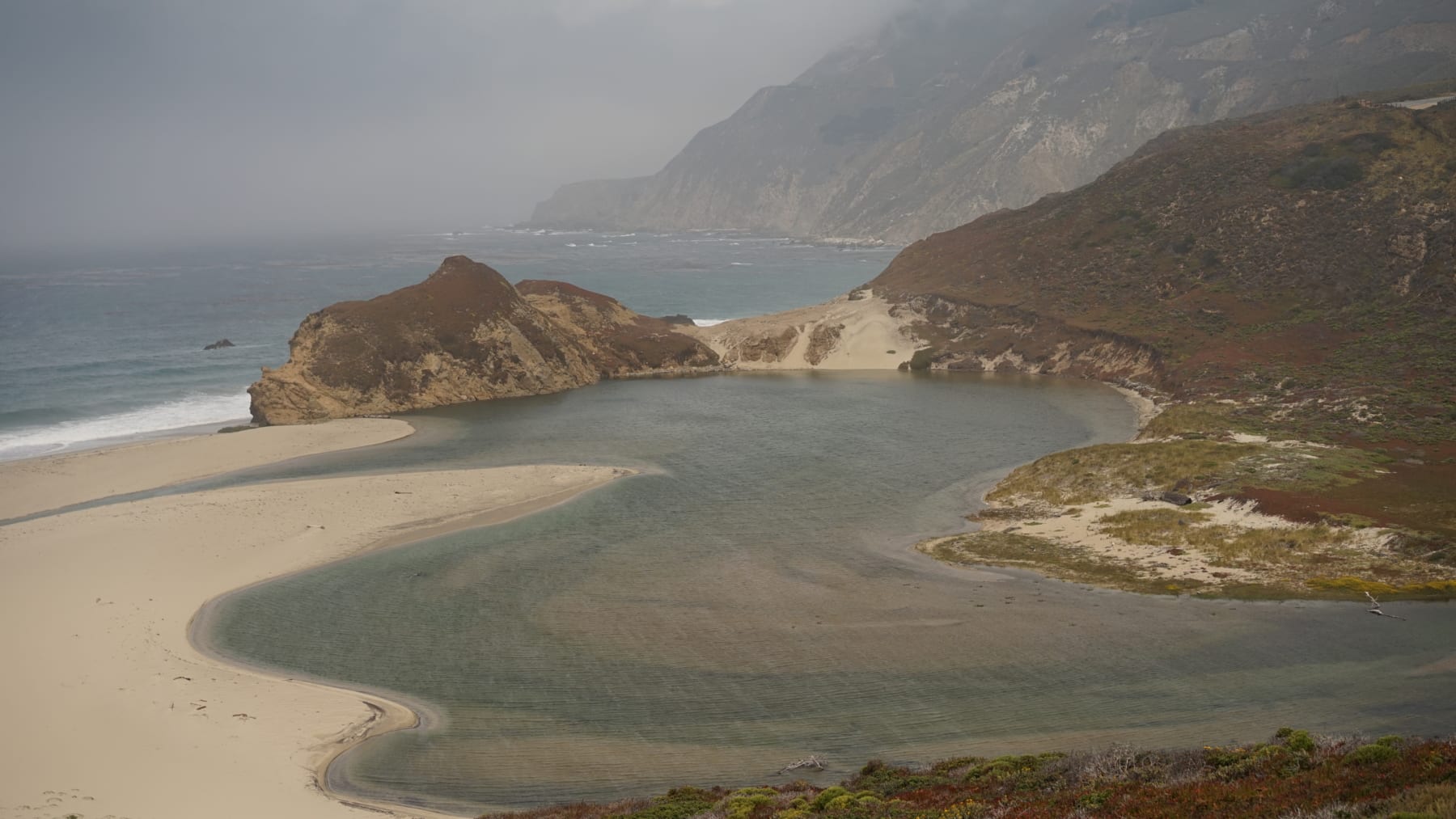 So, on a warm, sunny Friday morning in July we loaded up the bikes, suited up in a mishmosh of summer and winter gear and set out for Monterey. We had booked a hotel in Carmel-by-the-sea for the first night and in Pismo Beach the second, other than that we had no plans outside of riding PCH through Big Sur. However, I had gone out and bought a pair of Butler Motorcycle Maps so that we could find some good roads on the way up.

This lead us to get out of LA as quickly as possible then cut over the Ca Route 33 in Ventura. Route 33 is an incredibly dynamic road starting out as a winding mountain road in Ojai that climbs the Santa Ynez mountains. It later transforms into a series of slow sleepers at the top of the mountain and down the backside there are tight and technical turns leading down into the Central Valley. Along the way the scenery changes as much as much as the road itself making this ride just incredible.

The route is as suited to cars as it is to motorcycles, but I would argue that two wheels is the best way to enjoy it. 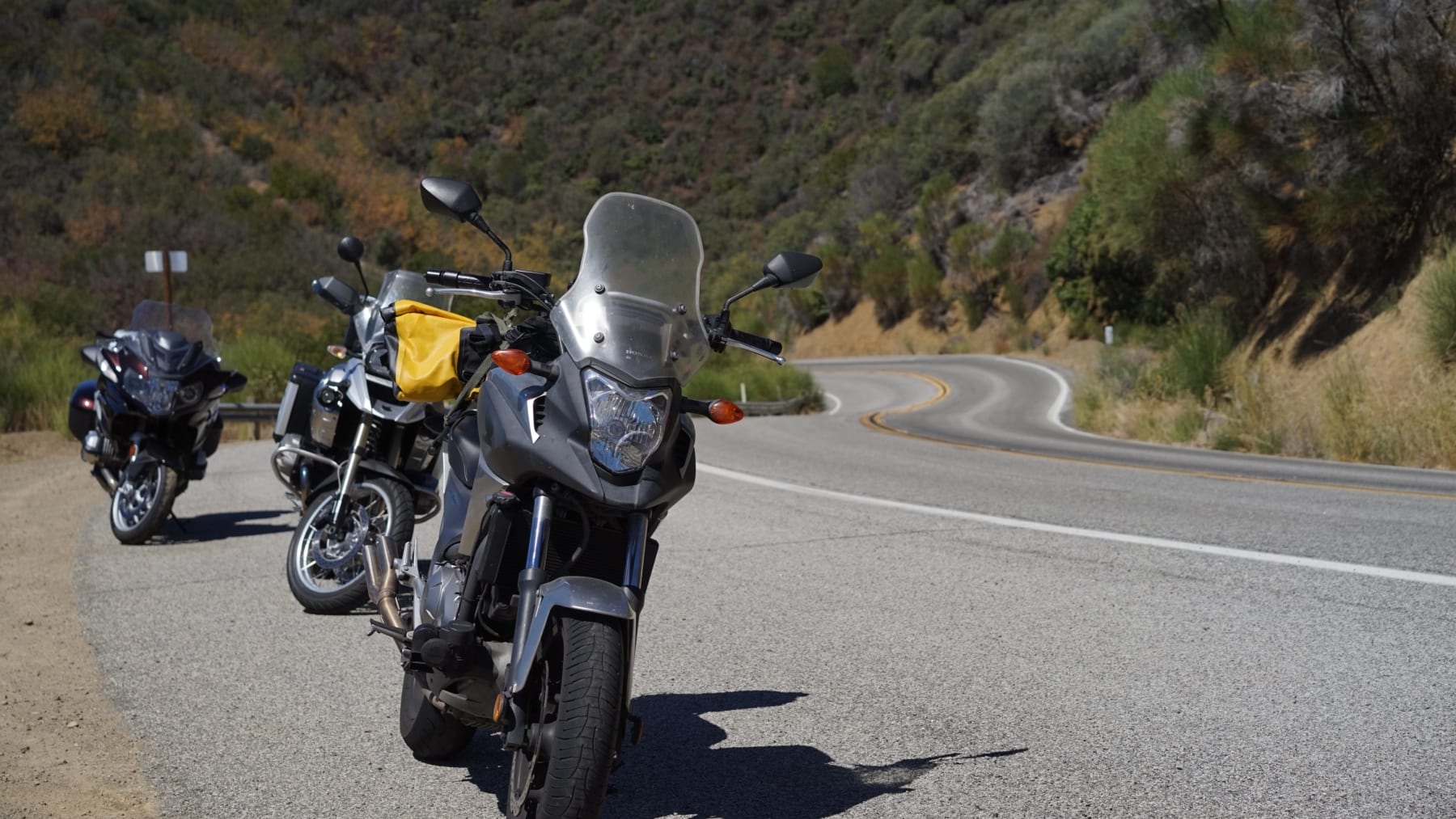 By the time we reached the end of the 33 the sun was high in the sky and scorching us as we made a mad dash for the coast on the 166. The 166 is a nice enough ride when the weather is right, however on this day it was 110+ and that sort of distracted us from the casual winding nature of the road. All we could think about was getting somewhere with ac for a little midday R&R before heading up to Big Sur.

The 166 terminates in Santa Maria, and while I can’t speak for the town as a whole I would like to give the lone In-n-Out a full five stars for cold ac and even colder water. From here you can head all the way out to the coast and jump on PCH or ride the 101 to Morro Bay then switch to PCH there. We chose the latter option, mainly to save time, but also because the coastline in Santa Maria wasn’t what we were looking for. 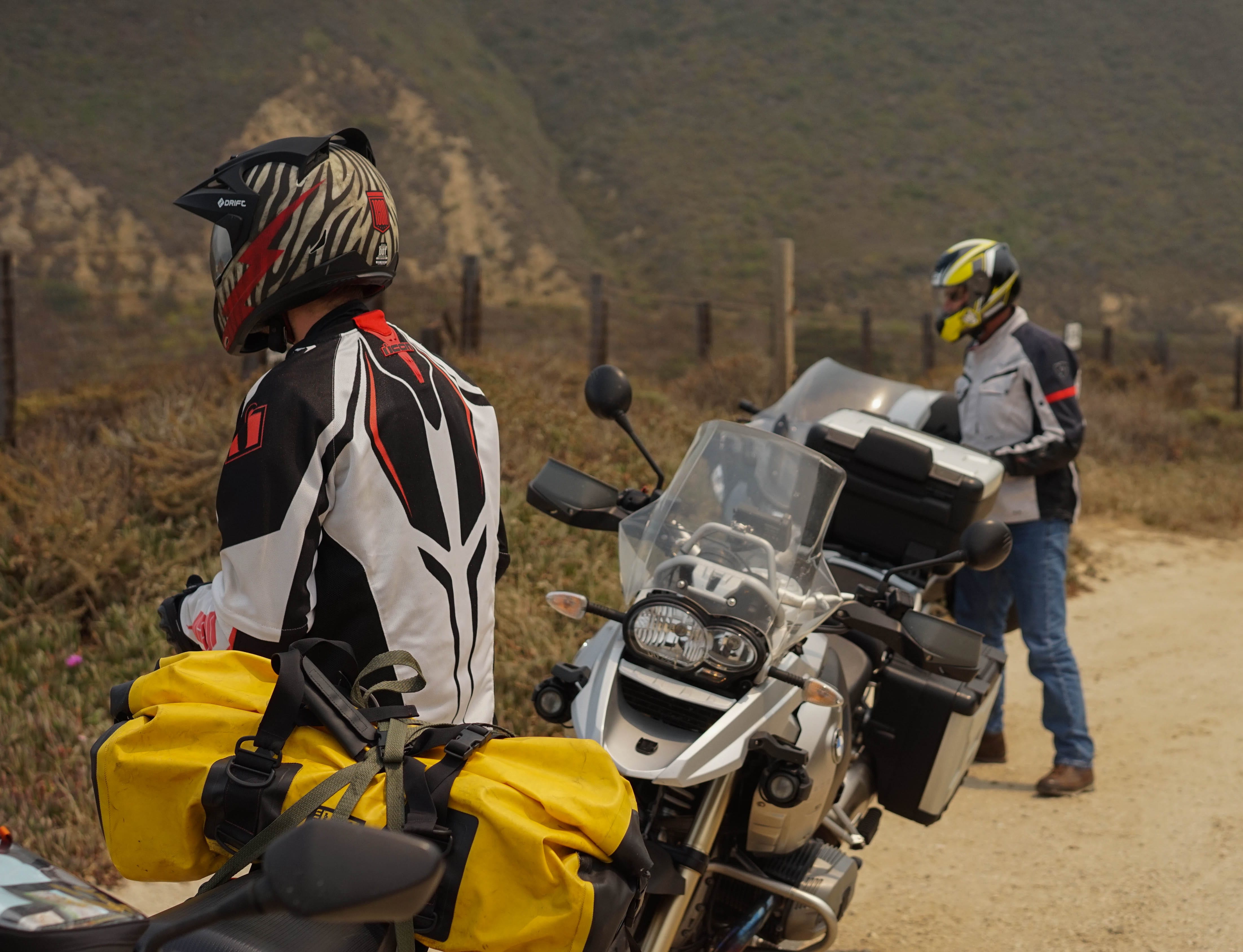 Passing Morro Bay is where the scenery begins to change. There are parts of the coast that looked like they were from the Scottish countryside and then there are parts that look like they are from another planet. In the mornings the fog comes in so heavy it feels like a Stephen King movie.

Keeping in line with the rest of the trip our time in Big Sur wasn’t how we had planned it out. Upon our arrival we learned that the Soberanes fire was not only raging in the mountains of Big Sur, but was uncontained and threatened to shut down the road through the area. As such, we made the decision to press on rather than stop in the middle of the fire. 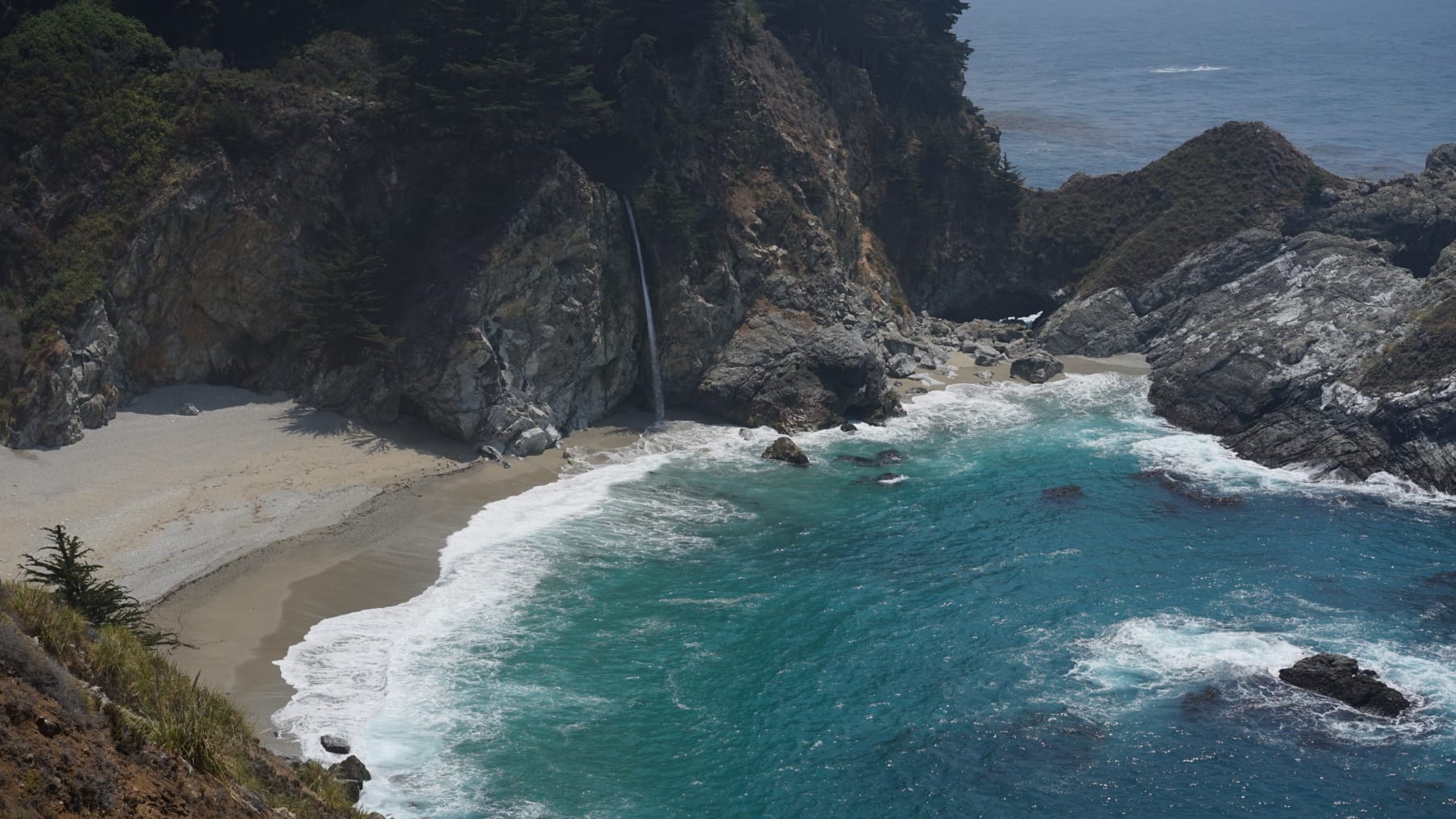 Luckily for us after we woke up the next morning they had contained the fire, at least enough to allow traffic to pass through the area, and we decided to spend the day in Big Sur rather than riding up to Monterey. With how sore we were after that first big day of riding the idea of spending more time off the bike and seeing the sights was very attractive.

If there is anything I learned from a trip like this is that while planning is important it’s not everything. Don’t be afraid to have a trip be less than perfect, or to have to change plans on the fly. While an itinerary can help to give you an idea of where you need to be and when it shouldn’t control your trip. 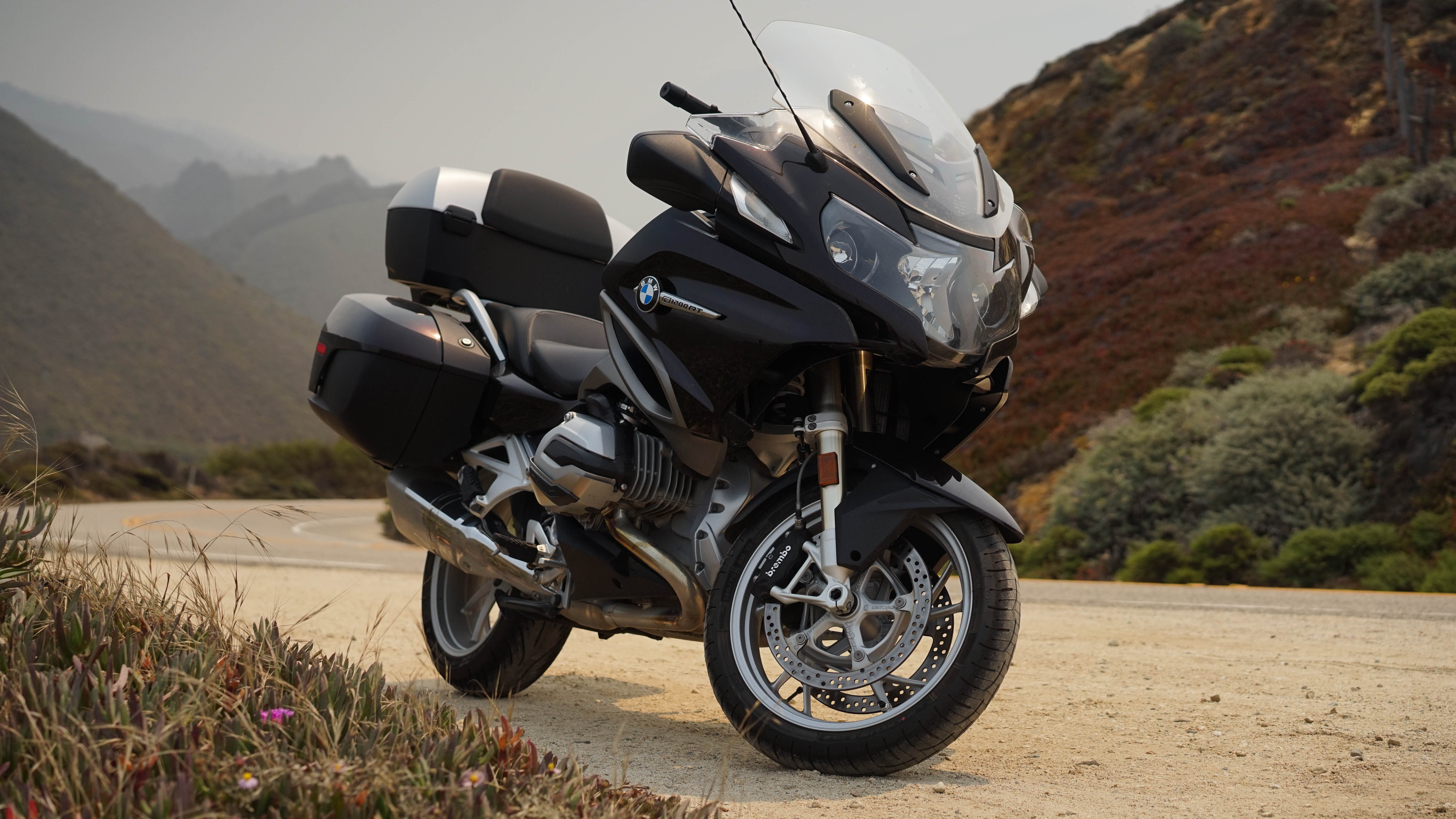 If you have any questions, suggestions for good road trips, or just want to share a story of your own feel free to leave a comment below!