Having attended high school and college in the northeast in the 1990s, and having been a car geek, my exposure to the import scene was quite formative. Some of the most iconic vehicles of that era were the Diamond-Star Motor cars. The sports cars of that joint venture were the Eagle Talon, the Plymouth Laser, and the Mitsubishi Eclipse. All three varied in form from a basic econo model to turbocharged all-wheel-drive slayers. In appearance they were rather similar with differences being limited to lights, spoilers, and wheels.

Those days are over. Also over are the Plymouth and Eagle brands. Mitsubishi is still here but the company has had better days. To its credit, Mitsubishi is trying to recover. With minor tweaks, each of the variants of the Outlander keep improving while remaining a budget conscious choice. The company is also venturing into plug-in electric hybrid powertrains. A solid move as the Outlander PHEV deserves a special mention for being pretty darn good. And then they brought back the Eclipse name. 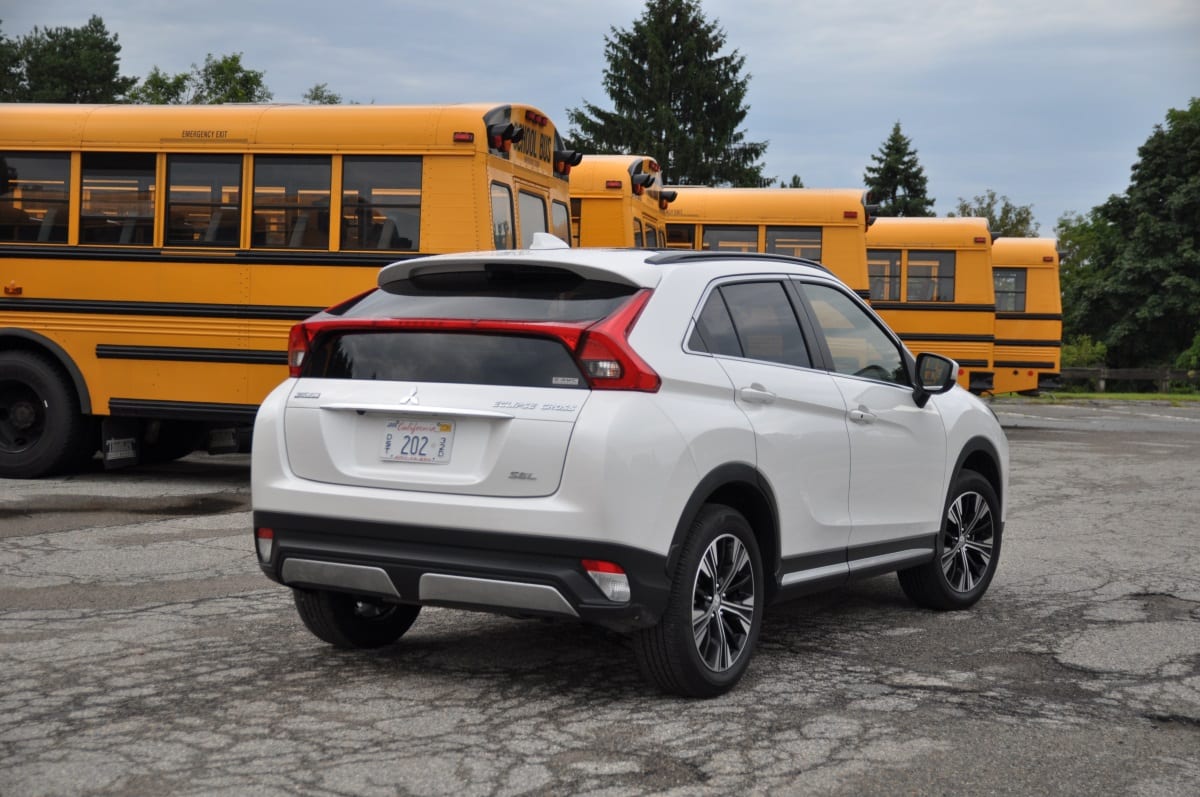 When Mitsubishi announced that the new Eclipse would be a cross-over utility vehicle, people sort of lost their minds. How could Mitsubishi tarnish the Eclipse name like that? Why would they disappoint the dozen of Eclipse faithfuls waiting for their proper sports car to come back? Why, why, why?

Because CUVs sell. A crossover is what everyone wants now, and even if the market is already kind of loaded with sporty four cylinder CUVs, it makes sense to toss your hat in the ring. Mitsubishi isn’t making the Eclipse CUV to piss off your crank-walking ass. They’re doing it make money. They’re doing it to survive. 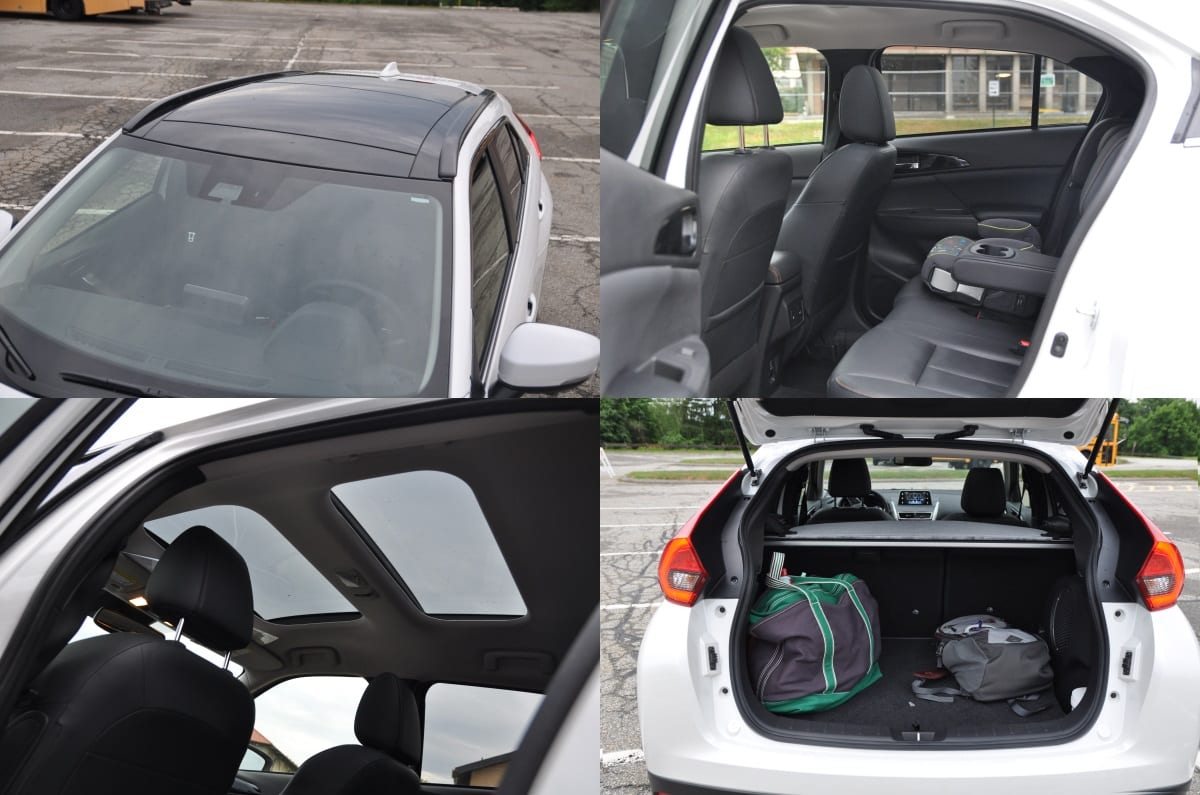 Let’s take this further. The twenty-year-old Eclipse buyer lived in the 1990s. Since then he or she has likely put on a few pounds. He or she may have a kid or three. That former Eclipse-owning forty-year-old buyer has the need for the extra space, the extra doors, and maybe even the extra seat. It therefore should not a mind-blowing theory that this 2019 Eclipse Cross might actually be a rightful evolution of the original. Send hate mail to Jeff@HooniverseDOTcom.

Design wise, the front has the Mitsubishi family resemblance. Side profile is slightly angular, dare I say Aztec-y from a certain angle, and it kind of looks like its butt was chopped off a bit too much. The rear hatch has a split window à la the Honda CR-X. There is the mandatory lower black trim which gives it the CUV creed. In all, it’s a fine design that is neither offensive nor attention-grabbing, especially in white.

The interior of the Eclipse Cross is a slight departure from other Mitsubishi products. The double-DIN headunit of other models is nowhere to be found, replaced by a tablet-like 7-inch screen in the center of the dash. Down below is a touch-pad, which I admittedly hardly used because the touchscreen interface was sufficient. The menus are simple and easy to navigate. The system supports Apple Car Play and Android Auto and it can manage several devices at a time, too. Unfortunately the designers copied Honda and excluded the volume knob in favor of touchy pads. Further, each bank of SiriusXM presets has only four sports and one has to navigate the screen to switch between them – not great for channel-surfers like me. 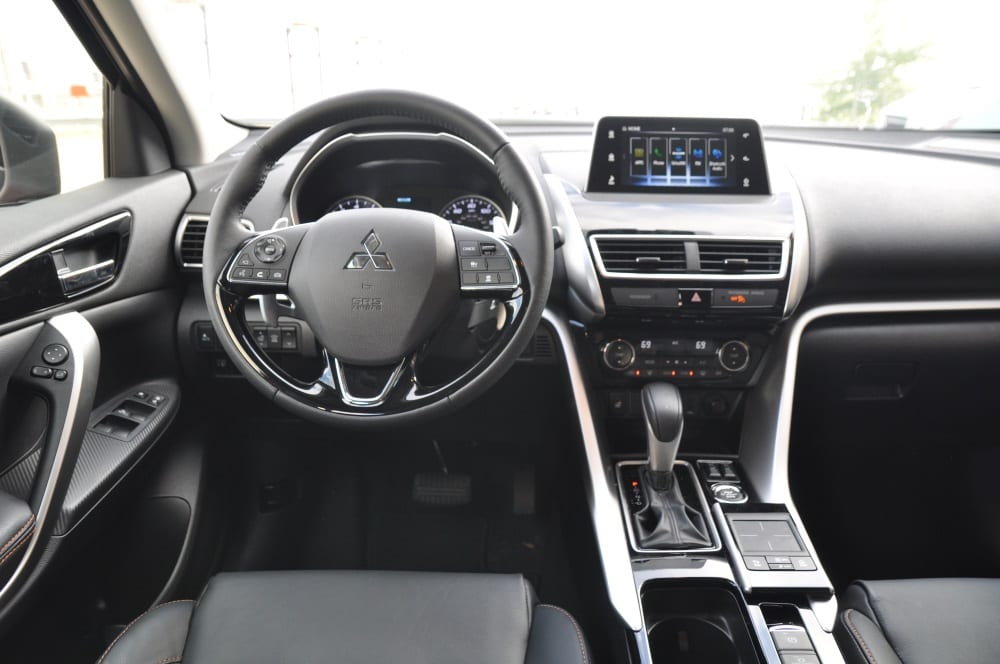 Many other interior pieces seem to come directly from other Mitsubishi cars. The Eclipse Sport also features several different finishes throughout its interior as opposed to one common theme. There are silver pieces, carbon fiber-like pieces, and a piano black-like finish all mixed together. The seats are comfortable and no occupant will be uncomfortable.

The cargo area is a decent in size but the slopping hatch may prevent taller items from fitting in well. The rear seats fold down and they’re split 60:40. Like a proper outdoor adventure ready CUV, the Eclipse Cross has optional (or part of a package) roof rails. You’ll have to opt for cross bars in order to install a cargo box or a bike attachment. When equipped with a hitch, the Eclipse Cross can only tow 1,500 pounds.

The Eclipse feels rather neutral in daily driving. It handles and stops well, but could use a little more power. The ride is comfortable, too, even over the crappy roads of the northeast. This crossover essentially does everything well without being really great nor really bad at anything. The AWD Eclipse Cross is rated 25 mpg in the city and 26 mpg on the highway, which sits slightly below average for this class. 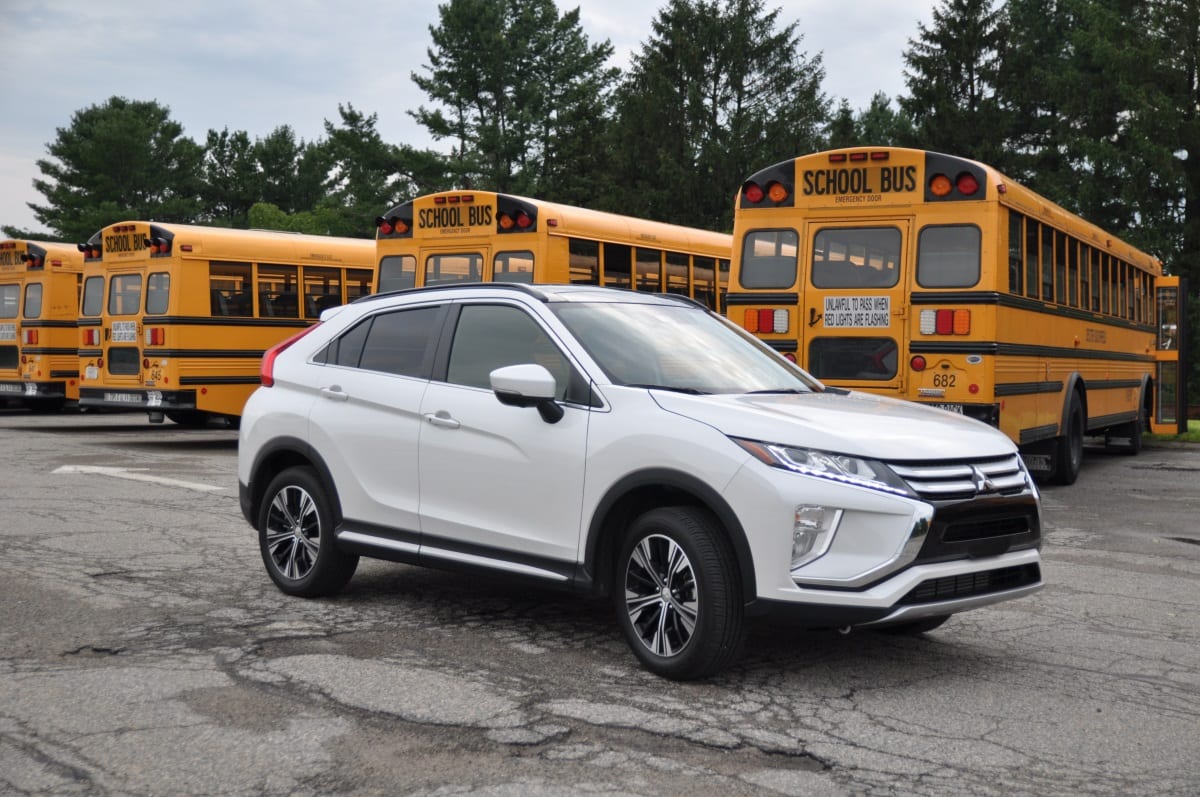 The 2019 Eclipse Cross starts at $23,595 for base front-wheel-drive ES 1.5T model. Prices climb over the LE, SP, SE, and the SEL model seen here. The AWD SEL starts at $28,195. There is one major option package, the $2500 Touring Package which has a huge sunroof, Rockford Fosgate audio, adaptive cruise control and the various latest safety systems that come bundled with it. There are also numerous accessory packages.

Will the Mitsubishi Eclipse Cross bring back those 90s kids to the dealerships? I wouldn’t count on it. But it will bring in more buyers in general, perhaps those empty-nesters looking to rejuvenate, or at least generate more interest for the brand that needs it. It’s a very competitive segment and the Eclipse Cross is simply just another option. 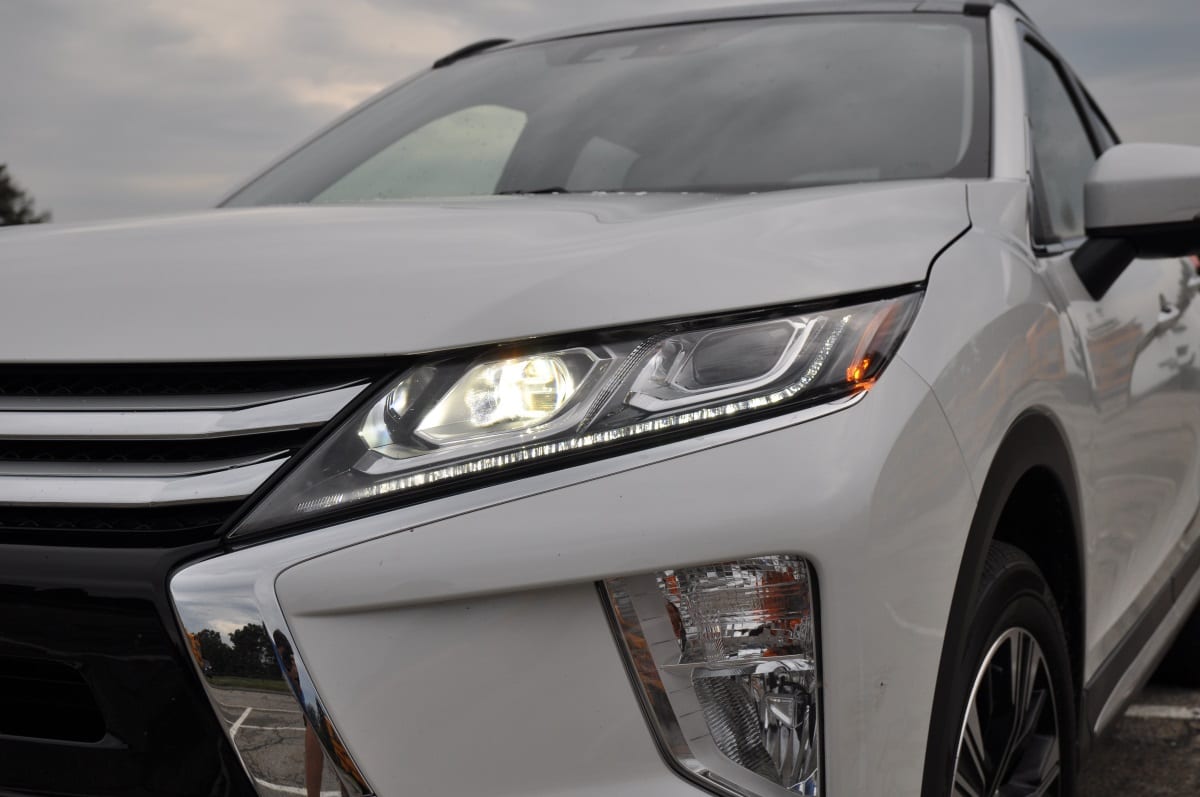 [Disclaimer: Mitsubishi Motors North America, Inc. provided the vehicle for the purpose of this review.]