It must be a sign of my age. The more I learn about electric vehicles, the more I realize how little I know. Based on my experience, the best way to learn about anything is to get some background, and then is to just jump into it. So when an opportunity to finally drive the Ford Mustang Mach-E presented itself, I jumped on it.

What I knew about poorly-named Ford EV came from its specs: RWD or AWD, three power levels, and two battery sizes (or something like that). It was also what can be referred as a CUV, whatever the hell that means anymore – four doors, five seats, and a hatch on a taller than “car” body and ride height. 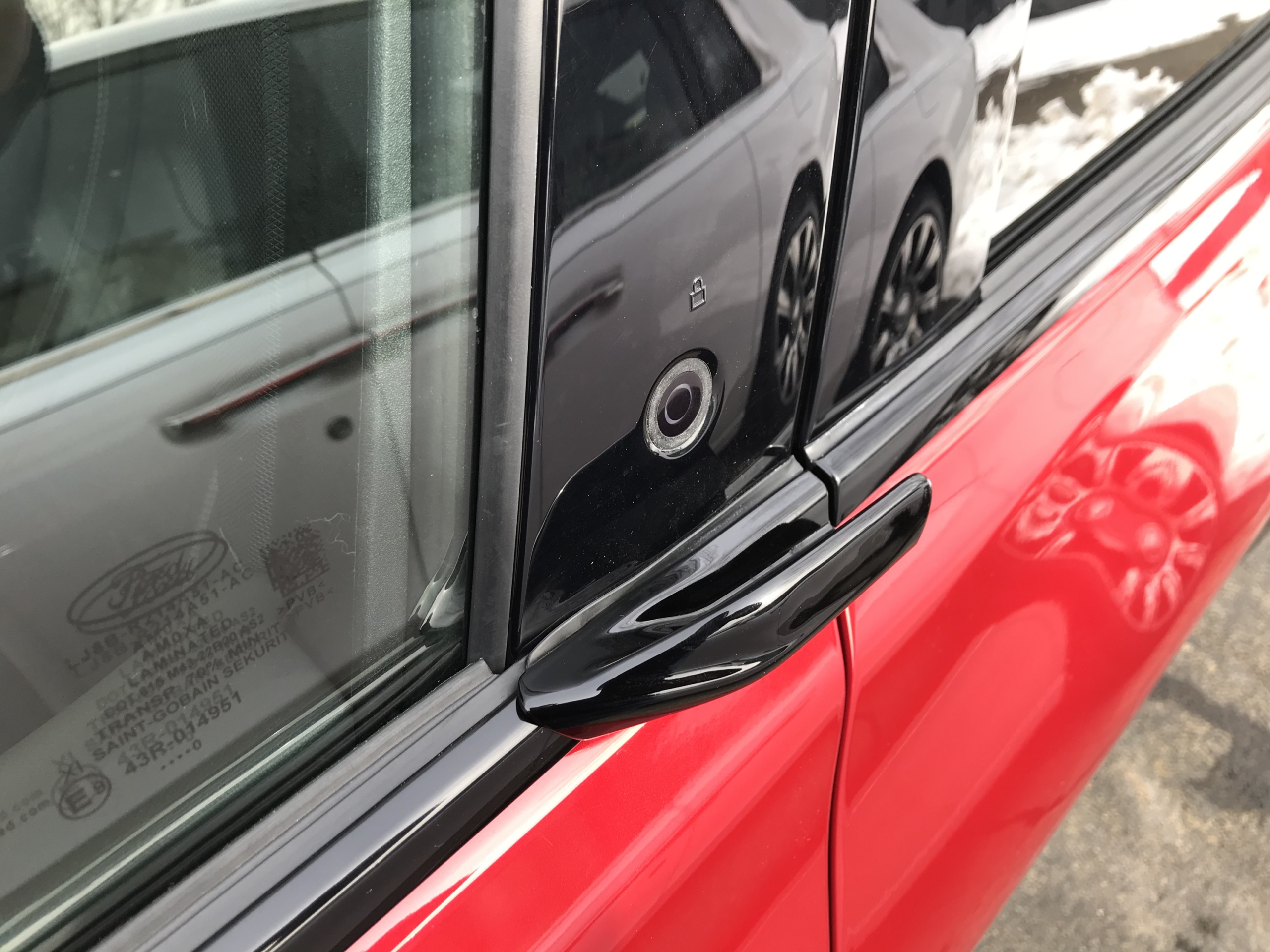 Before even getting in I noticed something odd – the door handles. One needs to press a button for the door to pop open. Then, on the front door, one needs to pull a fixed handle to swing it open. That’s just weird. The futuristic push-button-to-open-the-door crap hasn’t worked decades ago and it isn’t working now. We have perfected the conventional mechanical door handle and power-assisted door locks, so why make it worse for the sake of the future?

Once seated, one is pretty comfortable. It may be a Mustang by name but it has Ford Escape spaciousness. The driver’s attention is drawn to two screens: a smaller landscape screen in place of a typical gauge cluster and one a huge portrait screen in the middle, with a single volume knob sticking out of it. The only other button was what was once known as an ignition, or the engine start button. I guess it’s an on/off switch in EVs. 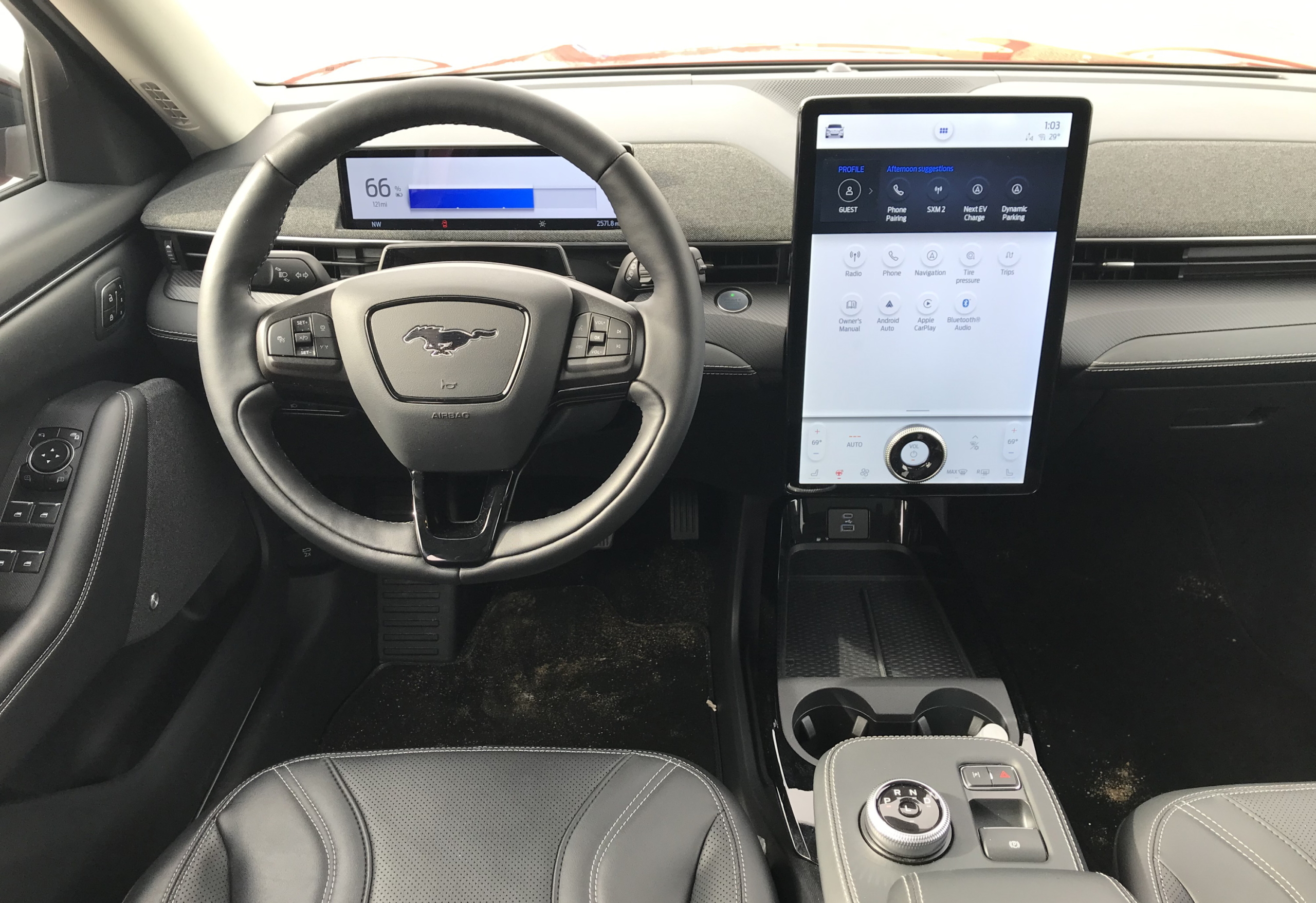 That lack of physical knobs and switches did not sit well with me. The automotive industry has spent years mastering ergonomics, now all thrown out for a programable display that does not correspond with muscle memory. Further, it requires a diversion of eyes from the road. This seems like it’s another thing that Ford is playing with to attract Tesla buyers but in my opinion, it’s not better.

There are typical steering wheel buttons for audio, cruise control, and primary screen control. Ford also thankfully retained conventional switches for lights, windows, mirrors, and locks. They have also not gone totally insane and retained stalks blinkers and wipers. Screen aside, which is to say mostly audio and HVAC, controls, the primary control systems are similar to one in any Ford of the last few decades. The shifter is a rotary knob, just like the Shelby GT500 – get over it. 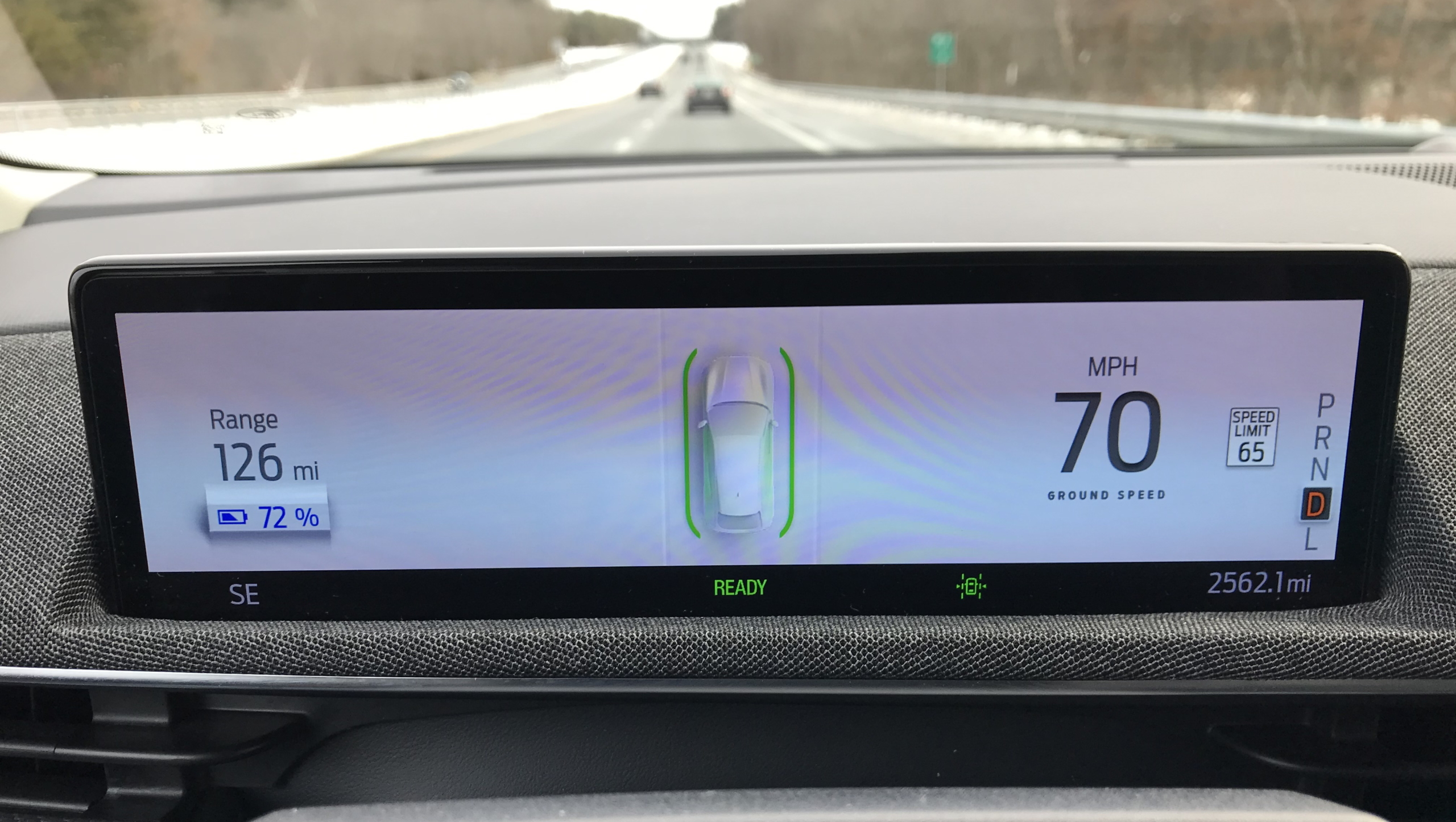 Once going, things are quiet. And this is where the Mustang gets you. Before I drove the Mach-E, I spoke to another journalist who said that “it’s not very fast”. In years of doing this, I learned to take others’ opinions with a grain of salt. That proved to be the right thing to do with the Mach-E. It’s because the Mach-E isn’t slow but because it can feel slow.

The lack of audio noises and the absence of a tachometer plays with the minds of those who have been driving conventional cars for years.  There is only silence and a flickering speedometer. The electric motor provides instant torque, which can be similar to that of a diesel engine but without the lag and the noise, which can seem to deceive. Don’t be fooled; this thing boogies. Most comical is highway passing power – instant and free of drama. It’s best to keep your eye on that flickering speedometer. 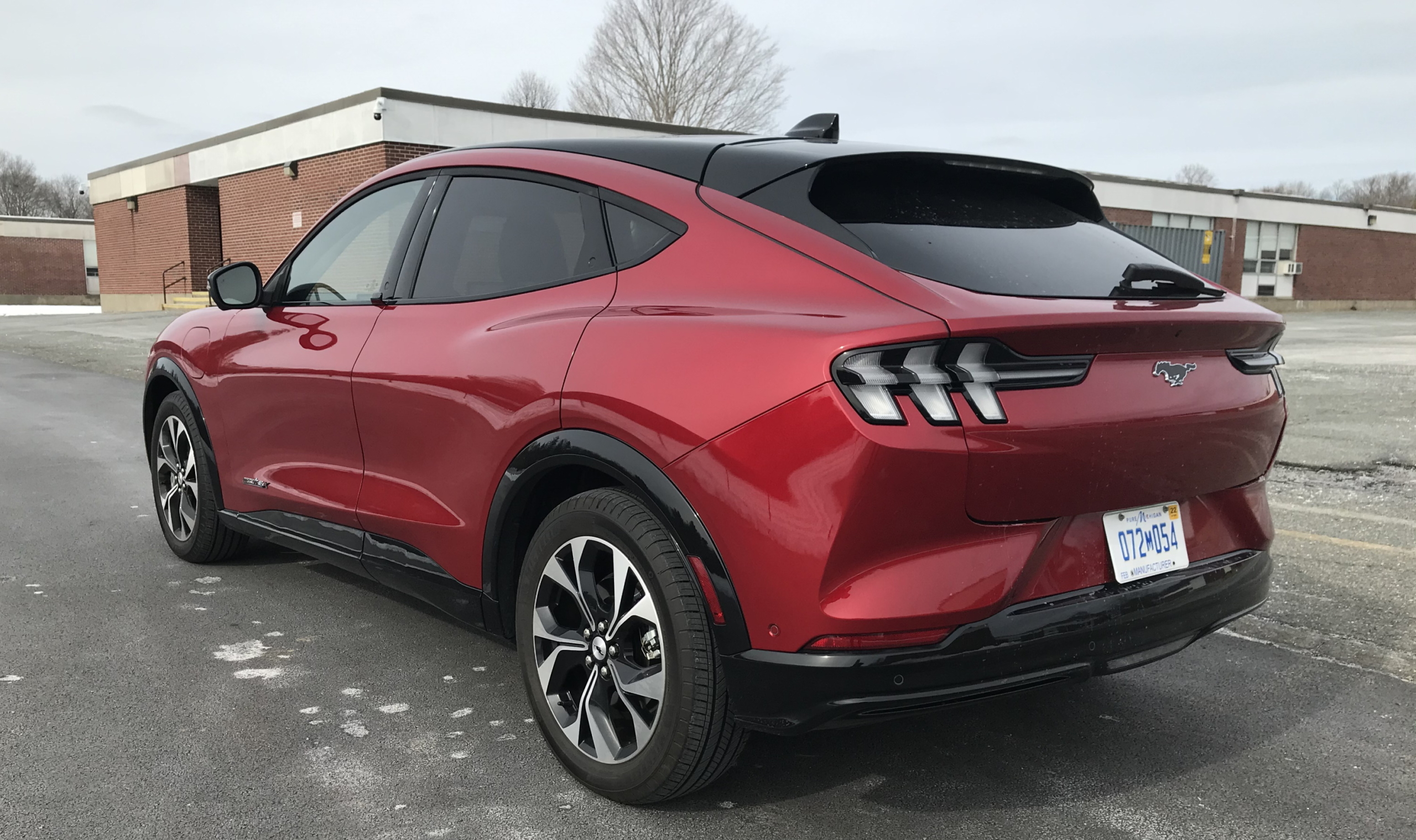 In the world of CUVs and SUVs, we forget how well “cars” handle. The Mach-E is planted. There is very little body roll. It doesn’t feel unstable at any moment, even when thrown inappropriately into a highway on-ramp. Accelerate mid-turn and it just goes, putting the power down linearly and predictably. Credit should go to the low center of gravity provided by the batteries and motors. Those factors seem to make suspension calibration easier. Whatever the case, the Mach-E is fun to throw into the curves.

The switch to EVs may be the biggest automotive revolution ever. EVs will change the layout and looks of a conventional car. The typical three-box design may be gone forever now. Engine locations and the way they send power to wheels are moot. There will be no driveshafts, exhausts, or fuel tanks. We’ve gone digital like never before. Let’s embrace it because EVs will only be getting better and better, easily surpassing every performance of gasoline vehicles.

There is only one obstacle I see in the evolution from legacy to electric vehicles – electrical infrastructure. Speaking as an electrical engineer and someone who in my day job recently conducted a study on electrifying diesel railroads, our ability to generate electricity at present time is limited. Further, our electrical infrastructure is susceptible to weather and high load demands. Perhaps before going all EV we should investigate the source of that energy. 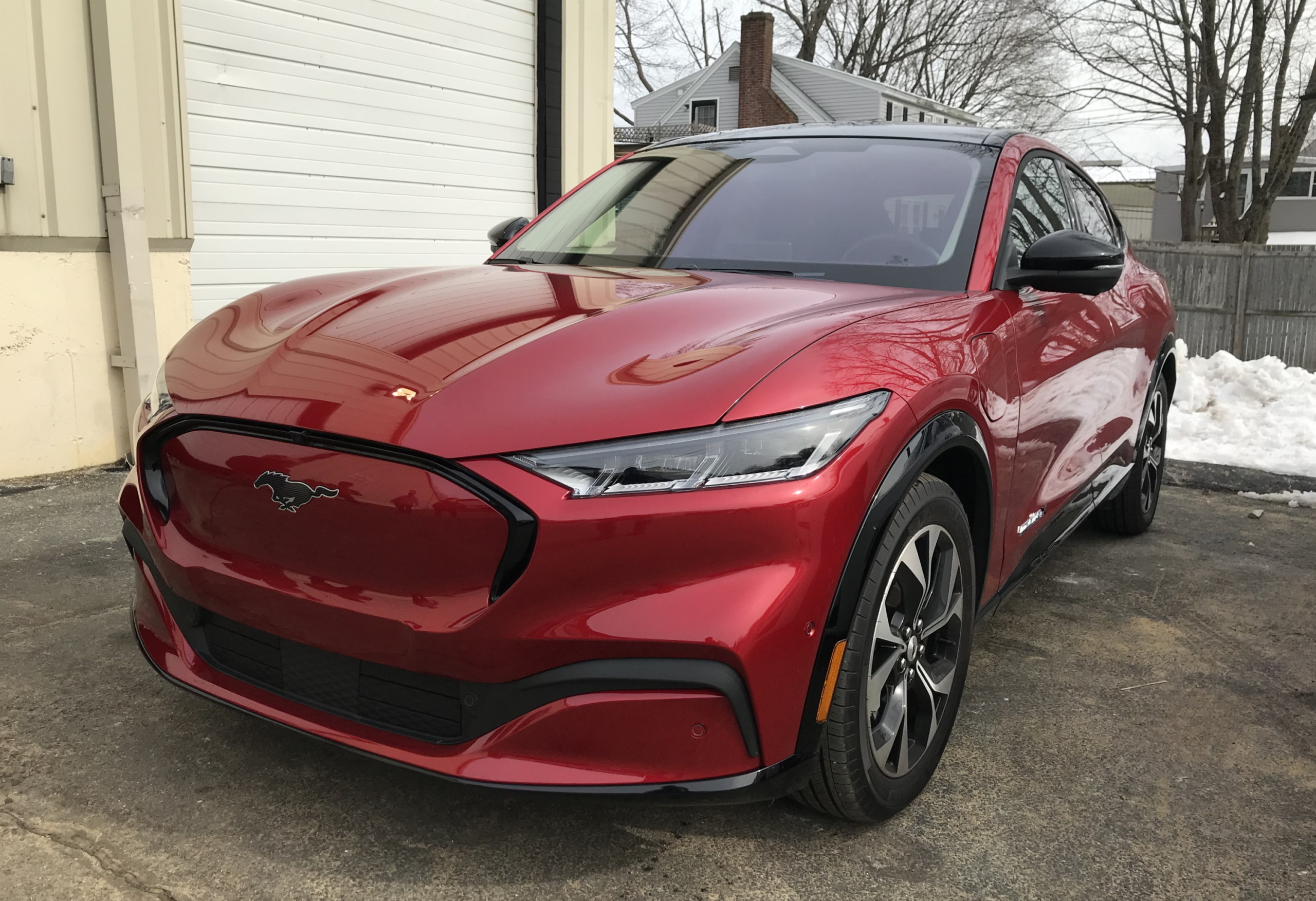