There are two cars in Nissan’s lineup that are slightly different from the others. First is the Maxima, a slightly bigger vehicle than the Altima. The second is the Nissan Murano, which fits between the high-volume Rogue and the three-row Pathfinder. Both vehicles seem somewhat redundant in the lineup and both, to me, seem somewhat more upscale when compared to the other models. Both have great V6 engines, nicer interiors, and the overall styling of both seems to be less generic than the other cars.

My theory here is that these cars are focused more toward professional adults who may not have kids, who have a little extra money and the desire to get something nicer, but really don’t care to buy anything from so-called luxury brands. These two basically seem to be understated premium cars for people just want and nice and comfortable car without all the drama. 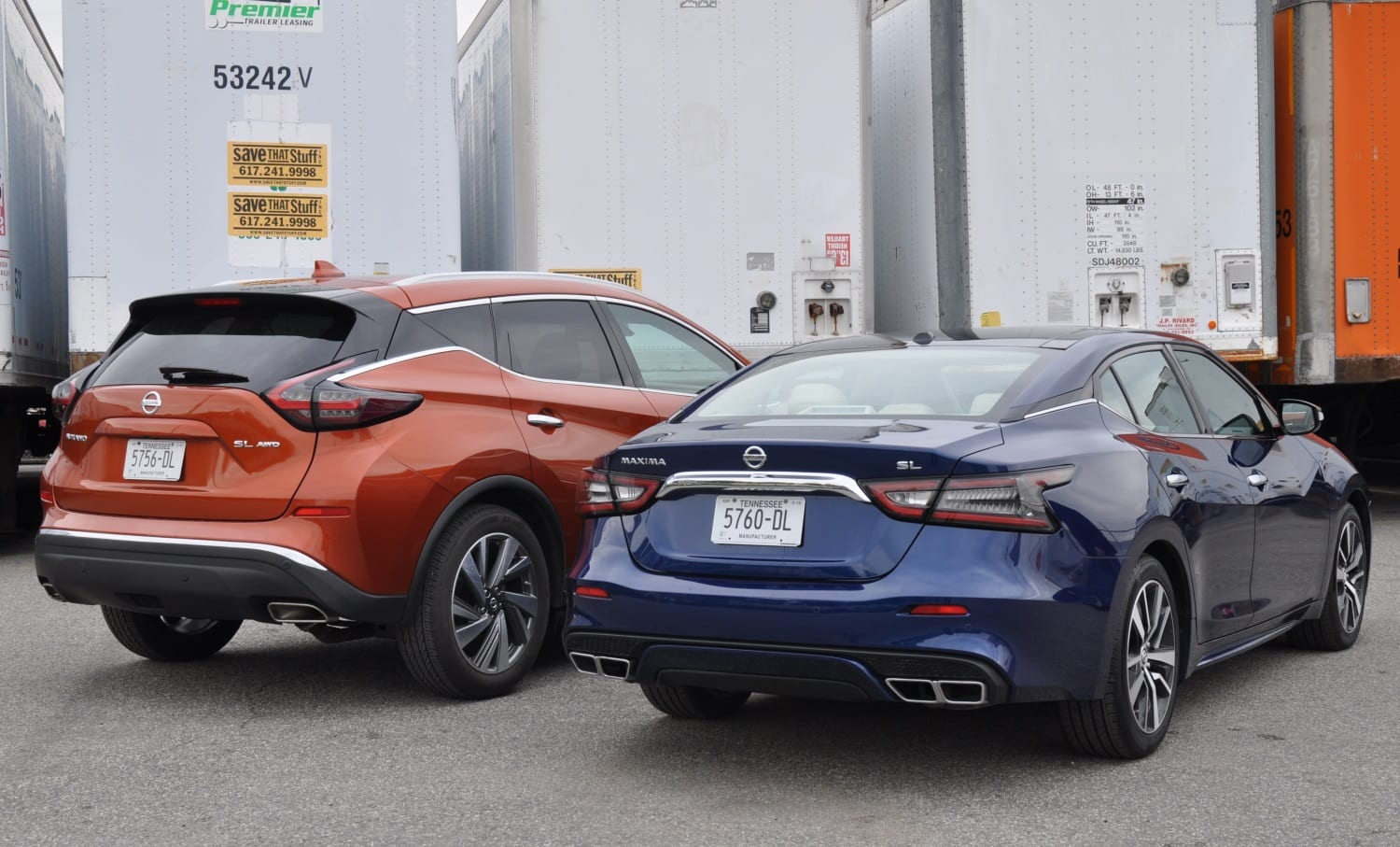 The Maxima is a solid highway cruiser. Some years ago I drove one the whole length of the New Jersey Turnpike and it really surprised and impressed me. The naturally aspirated V6 cruised smoothly and was just itching to approach the three-digit mark. While I have a general distain for continuously variable transmissions, Nissan seems to have applied some magic to this powertrain as the annoyance of it seems to be minimized. Perhaps they can apply that to their other CVT-equipped vehicles as well.

The Murano is quick off the line but the heft of the all-wheel-drive system and the heavier body is very noticeable compared to the Maxima. But it, too, is very smooth and does not lack power in casual driving. Neither is an enthusiast’s dream but neither is them is boring to drive. 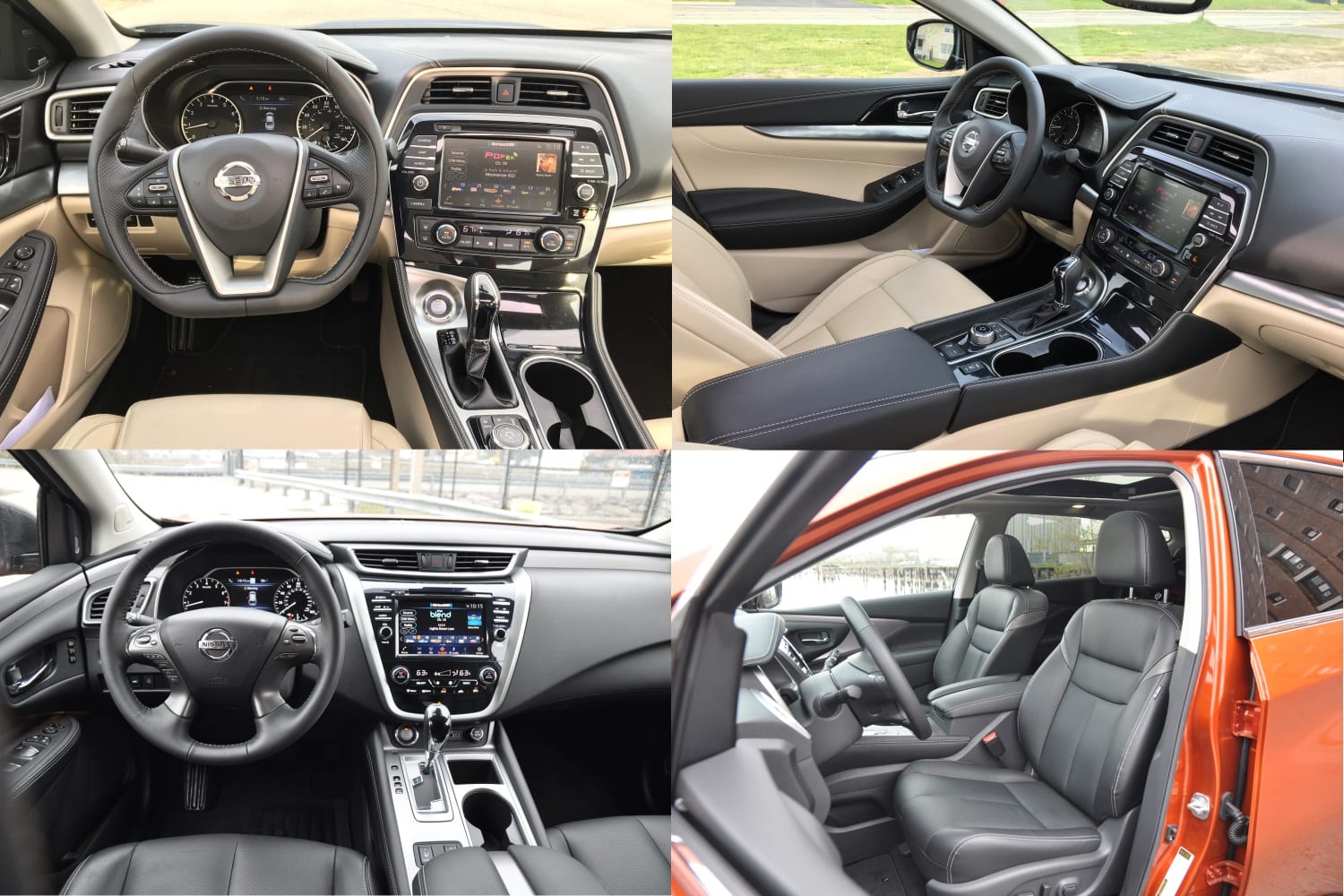 The interiors are equally similar. The general design for both vehicles is both ergonomic and modern. There are knobs where there should be knobs (volume, tune, temperature) and the requisite buttons. The graphics on the touch-screen seem a little dated but Apple CarPlay and its Android sibling have incorporated into it. The Maxima also had a bigger knob, similar to BMW’s iDrive, in the center console as an additional means of control.

Seats for the four primary occupants were comfortable in both vehicles, with plenty of room in all directions except perhaps the headroom in the rear seat of the Maxima, which was just okay. The seats, even on this mid-pack models, were wrapped in surprisingly soft leather. Equally spacious were the trunk, with the obvious advantage going to the Murano. But with the rear seat folded flat, a mountain bike with the front wheel removed does fit into the Maxima. 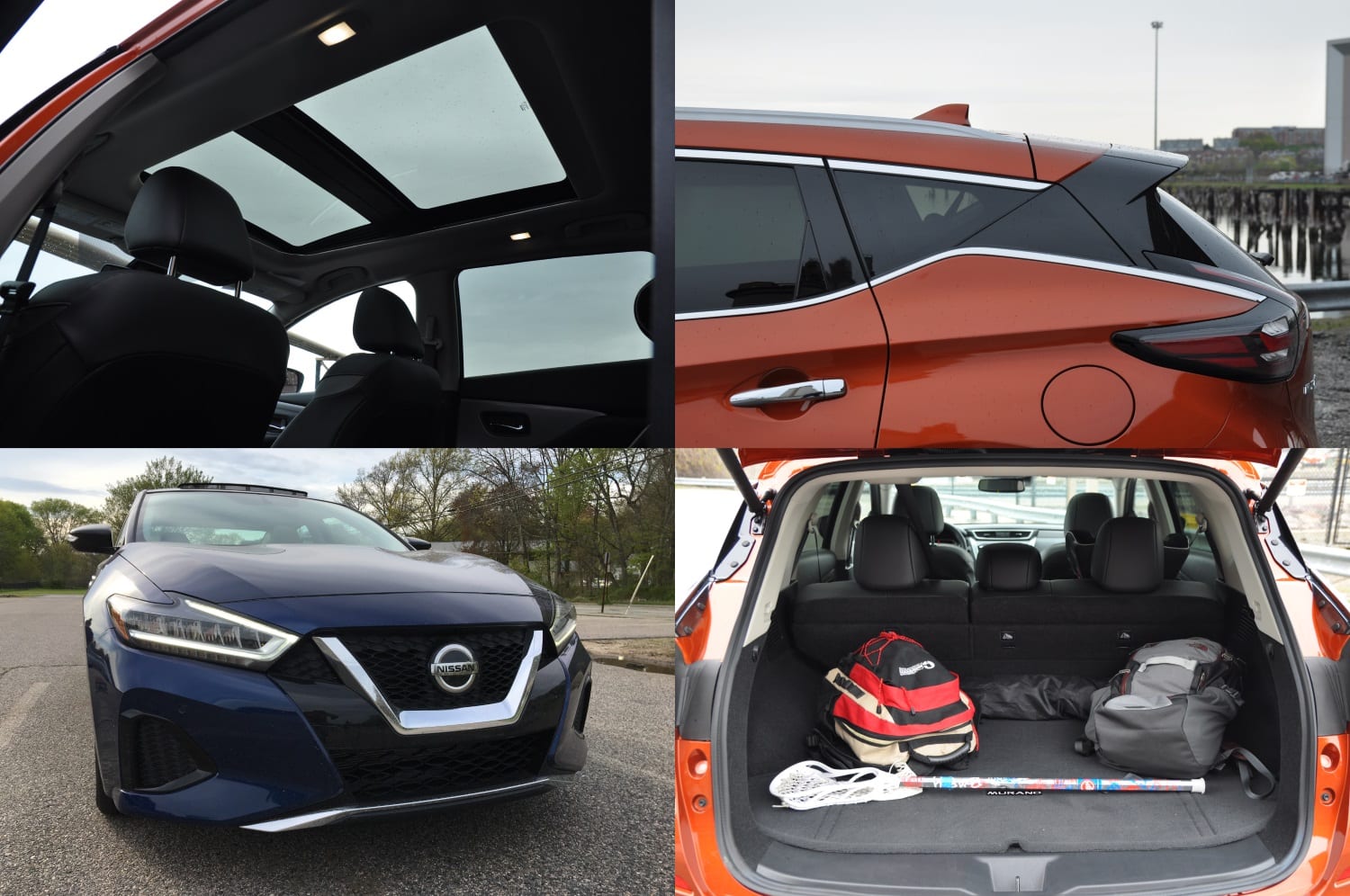 In the Nissan lineup, the Maxima and the Murano make an interesting supporting pair, sort of like the base versions of the Alfa Romeo Giulia and Stelvio. Except reliable and not horribly depreciating. Sure, they’re not as pretty but what they lack in personality, they make up in reliability and reasonable price. Neither vehicle is exactly new to the market but Nissan is doing a good job of keeping them relevant. Anyone choosing either of these two vehicles as daily drivers won’t go wrong. 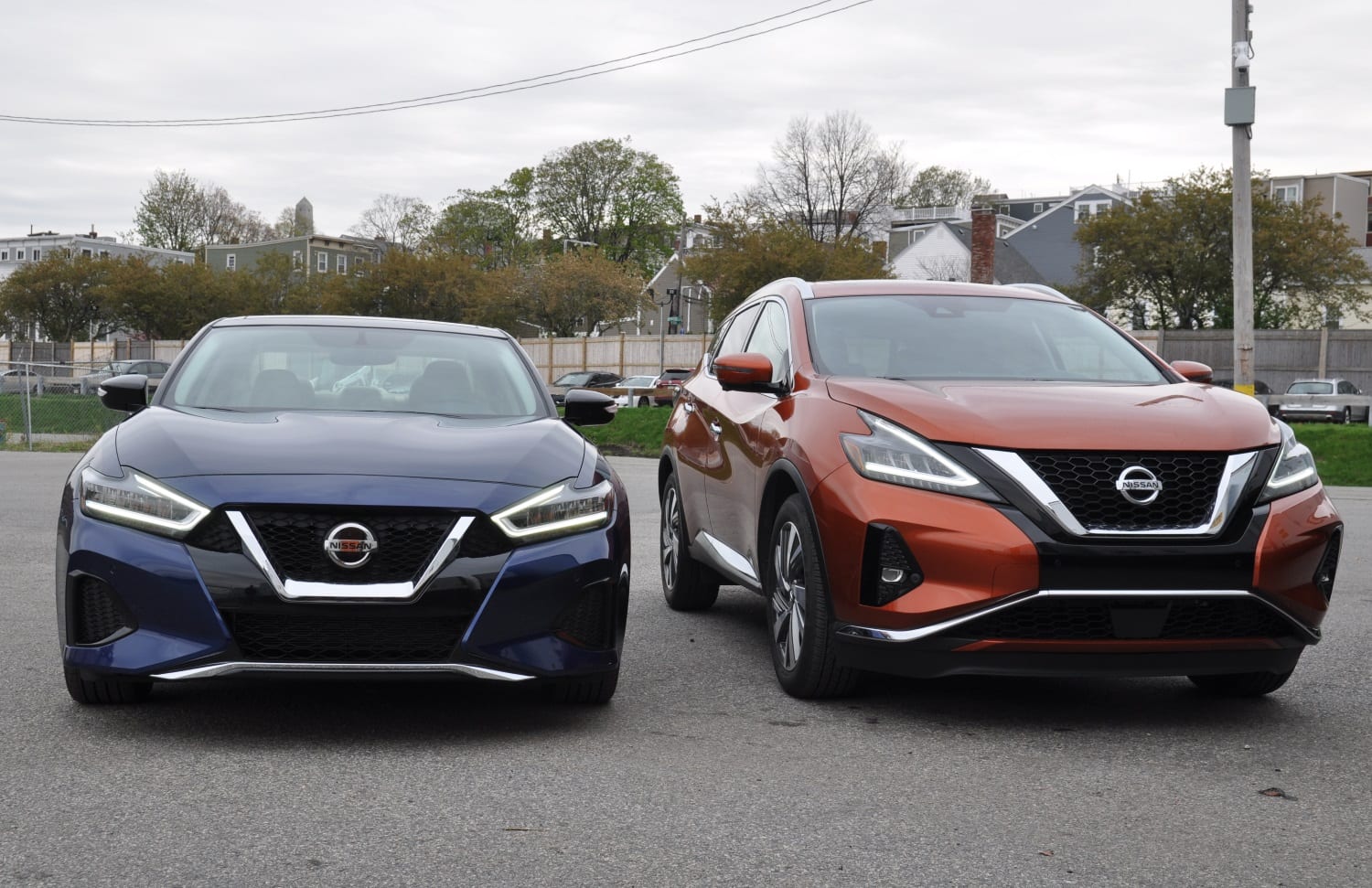 [Disclaimer: Nissan provided the vehicles for the purpose of this review.] 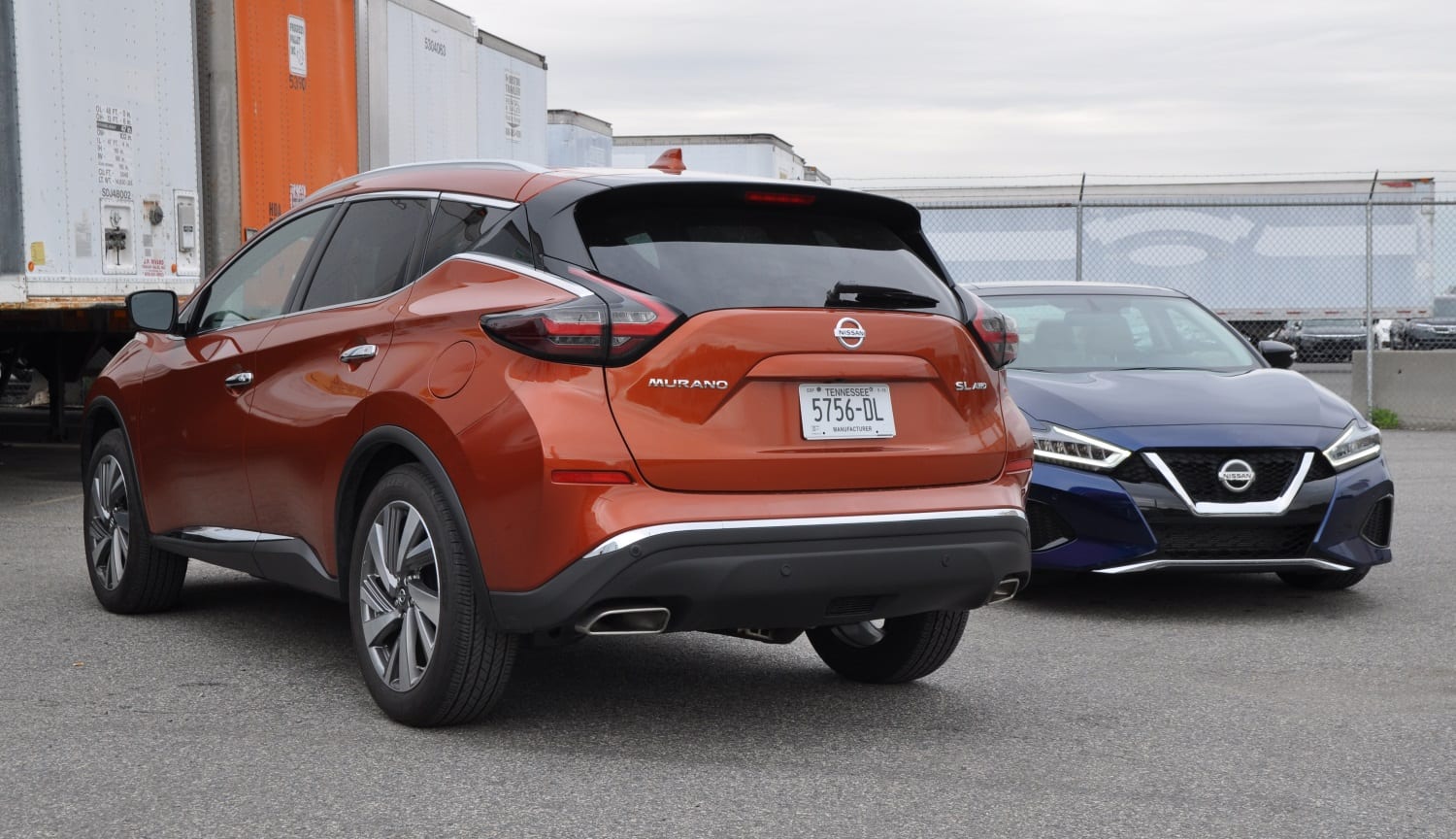