Some time ago, I wrote up the Mercedes-Benz C-Class I’ve been driving to work and back. Since getting handed the keys to it I’ve bought a couple of other cars, in a staggering display of man maths, but I’ve also kept the Benz around since no-one else has use for it and the Volvo I bought as a cheap commuter/farm truck combo gets taxed more. Anyway, to keep driving the Benz I also need to keep it road legal and inspected, and at its last inspection it got marked down for a worn front lower ball joint. To get that sorted out and an alignment performed, I dropped the Benz off at a garage in another town and for a few bucks, I chose the cheapest car the garage offered to get me around. Yes, I paid for a courtesy car as only their bikes are free.

Turns out the e-Up! could be a perfect fit for a courtesy car. It sees mainly town use, it can handle getting groceries, and it feels less like a penalty box than the Fabias parked next to it. My time in the e-Up! was quite short, but I was able to note a few things.

Firstly, the model here is a couple of years old and it doesn’t benefit from the revisions done to the range for 2020. The cabin and infotainment got a light overhaul for this year, which toned down the appliance feel of the interior judging from photos. It has to be said I haven’t driven a fossil-fuel version of the Up! ever, which means I don’t have the best possible yardstick for comparison.

I’d like to say the e-Up! probably occupies the same exact slot where the Honda e will arrive later. However, you can get away with an e-Up! or a similarly shaped electric Seat Mii or Skoda Citigo for around half of the suggested price of the Honda, which would mean placing a lot of emphasis on the style and design of the Honda. It has to be mentioned the prices of the electric VW Group triplets have been artificially brought down this spring, all the way to 17k and change from the 24k MSRP, thanks to subsidies from both the state and Volkswagen. Still, even the suggested retail prices are not on the same level as you can end up paying north of 35k for the Honda. (Prices in Euro.)

But the thing is, that in my normal-car-price-evaluating-brain 17-20k is something you normally pay for a grocery getter commuter car if you absolutely have to buy one new. That’s what a Micra costs, ish, or a Clio, or a Fiat 500. To get an EV for that kind of money feels like things have progressed to a point where you’re not paying a keg’s worth for a half-pint. 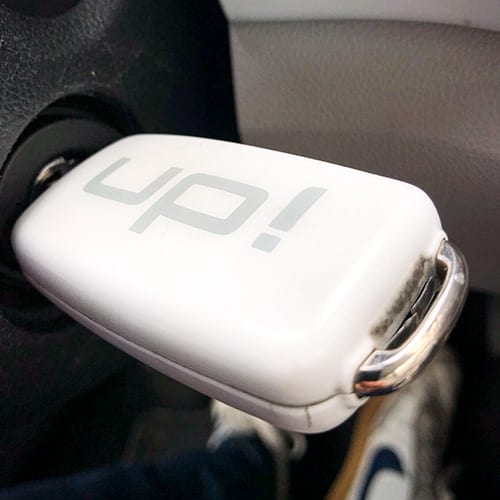 You start the e-Up! up with a regular ignition key which feels very cheap
and like a complete kludge, even if there’s nothing actually wrong with it.
But the electric cars I’ve driven so far always have had a start button or
something more electric-specific than just a normal stiletto VW key, and
it makes you feel this is a regular fossil-fuel car with an electric drivetrain
shoehorned in, which it is. But at this price point, it’s fine.

One strong benefit of the electric drivetrain is that the 60kW e-Up! feels a lot peppier than any budget VW with a petrol engine. The ample, 210Nm torque (similar to a 1.8T but available from the get-go) moves the little white box with gusto, and while the ride isn’t all that great, that’s probably down to the big wheels and low profile tires as well. Behind the wheel the Up! feels solid, but road imperfections make themselves well known. With the gear selector pulled all the way down, you get stronger regeneration and it’s possible to drive the Up! by relying solely on pressing and lifting the accelerator.

When I got handed the keys, the range reading showed just 100 km at a three-quarter “tank”. “Don’t go anywhere far”, the tech said, and my plans of picking up some tires from a junkyard 30km away were thwarted. This is where the city car emphasis of the Up! is most apparent, as even when new, it’s manufacturer-claimed to reach 160 kms of range, or 100 miles.

From my experiences winter-testing EVs in Lapland, I wouldn’t rely on that to make it 150km to work and back year-round, even with a chance of charging the vehicle during the workday. But that’s not quite what the Up! has been designed for, as it’s happier being used as a Smart with space for four: VW states over 80% of drivers only do a maximum of 50 km per day, which would suit the Up! just fine. I never got to try one of the most important aspects of this EV, its charging speed, so you’d have to rely on the fact it does with CCS. The battery in this 2016 car is just 18.7 kWh, while the 2020 update brought in a 36.8 kWh battery. That also gave it a lot more range, as the 2016 car’s 160km (NEDC) range was bumped to 260km (WLTP).

Still, I had to get some use out of the e-Up! here, which means I soon drove to pick up a two-wheeled wheelbarrow I had ordered some time ago. Immediately after opening the glass hatch, I thought to myself, “I’ve made a huge mistake”, but with just a little creative re-organizing, I was able to fit the wheelbarrow inside. The handlebars were spaced far enough apart to accommodate the passenger seatback between them, and the hatch made it shut without touching the wheels. Success!

Nearly everything about the Up! feels like it’s precision-engineered to work as a shared vehicle in urban areas, and perhaps even the exterior look matches an EV more than something burbly and three-pot. To perfect that, I’d choose a seat material that would look less susceptible to staining (I had to really pay attention not to spill my takeaway coffee, as the light seats would have been ruined), and perhaps the ignition key would be replaced with a starter button in the same location.

Otherwise, the design and engineering of the car and its cabin feel perfectly utilitarian, suitable for a car you’d never own outright but which you’d pick for the few miles home, for groceries or a well-planned trip to Ikea. I could also see myself leasing a car like this or subscribing to it for a reasonable sum if I needed a commuter car for 50km a day in an area where the EV infrastructure would handily support it.

I’d also like to note that the VW had weathered a couple years’ loaner car use and 10k km without seemingly wearing at all. It didn’t look like it had been beaten on mercilessly as some shared cars or rentals can be, but it appears the perceptible quality can withstand normal wear and tear. This bodes well for anyone considering one as a used car.

Picking up the Mercedes, I handed the VW keys back and commented: “It feels pretty good, doesn’t it?” “Oh yeah, it’s the best”, the tech replied.