“Yosemite” Sam Radoff is the dictionary definition and stereotype of a gritty “old-school Detroit” car enthusiast. He’s weathered with the odors of race gas, tire smoke, and the fumes from can after can of automotive paint. “I was a little man and then I blew up like an air balloon,” Sam began to tell me, when I questioned the “Yosemite” moniker. There was a business card he’d mailed to our office. “I didn’t have the beard when I started pinstriping, but after I got out of the Army and was riding around on my motorcycle, some of the guys stuck Yosemite on the front of Sam. Some people call me worse than that,” he said, with a laugh so grand it shook the receiver.

Radoff, now 75, grew up building model cars in a neighborhood on the northwest side of Detroit. “I was in the hub of custom cars, some hot rods, but basically custom cars, and that’s how it started.” Sam’s intricate flame work earned him an additional moniker; the “Flame Doctor.”

“I’m a guy that can take something and make something out of it. I enjoy making everything out of anything.” Over the past 20 years, that’s what Radoff has done. Additionally, Sam used to teach pinstriping and custom painting at a local community college. The 1970s were hot for Radoff. From chopped vans like the “Radical Rickshaw” (below), to building a motorcycle for Evel Knievel, and a custom chopper of his own dubbed “Deep Throat.” 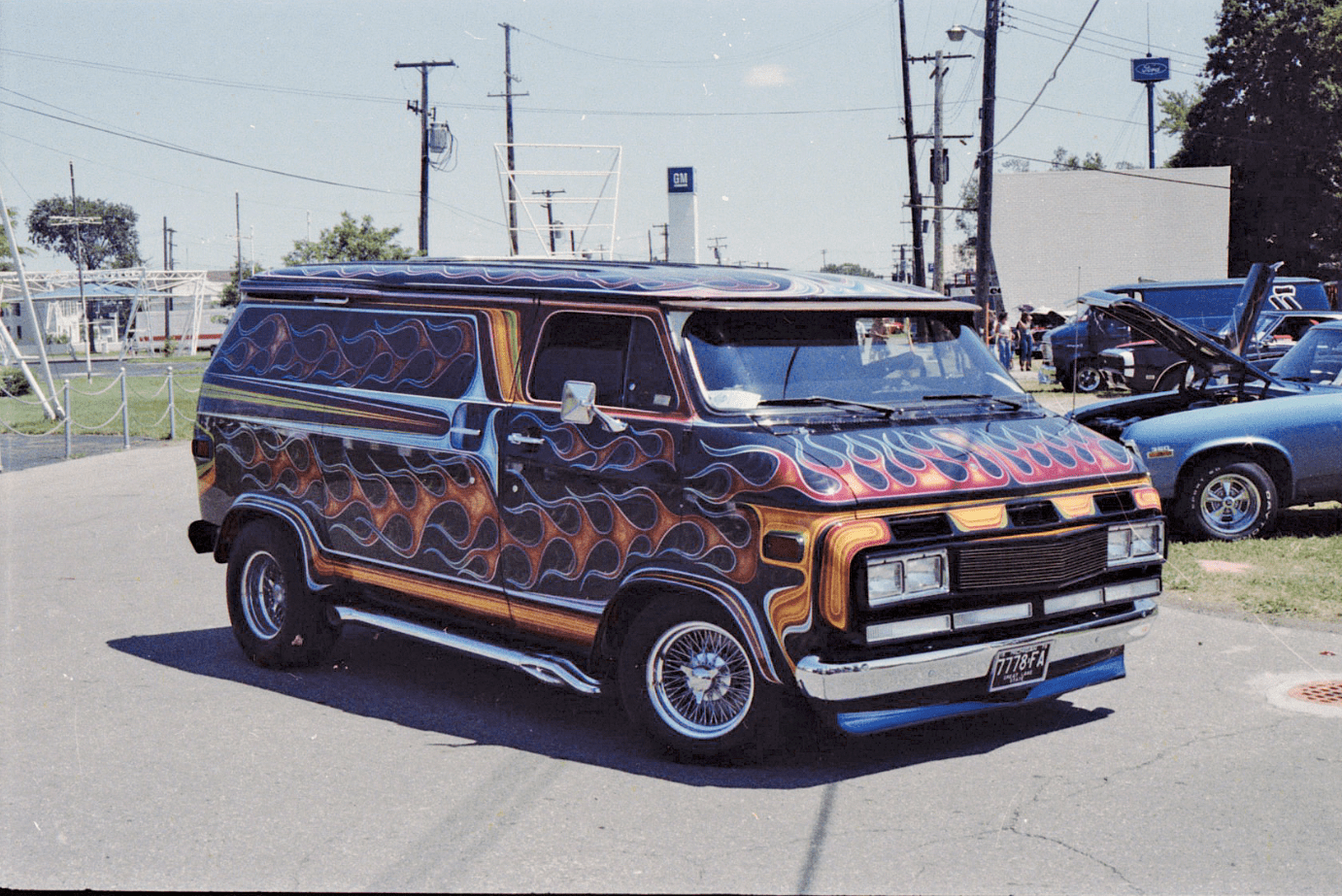 When commissioned for a job, Sam shows his clients photos of past work to help them grasp the time and money required. His approach to starting from scratch is… interesting. “People want to be able to tell artists how to do something. Everyone’s gotta be an artist in their own way and boast, ‘I told Sam how to do this.’ I forget all about it and do everything the way I want to do it.”

Sam takes pride in his radical paint jobs, explaining how the media has started to figure out that color and ideas are more important than the vehicle itself.

“My end goal is to make the vehicle as cool as I can, wild as I can, within the framework of what I can do.”

Everything he does free hand. There’s no measuring or guides. He just wants to make his subject look cool. Sam’s methodology, when it comes to pinstripes and flames, is simple. He doesn’t use a “stupid ass computer,” rather just his imagination, cheap tools, and a rack of 30 spray guns (which are never cleaned), each their own vivid color. “Since I was a child, I’ve been fascinated by pinstripes on cars, you know, the real ones, not the cheap decals new car dealerships up-charge you $200 to have a high school lot attendant slap on.” 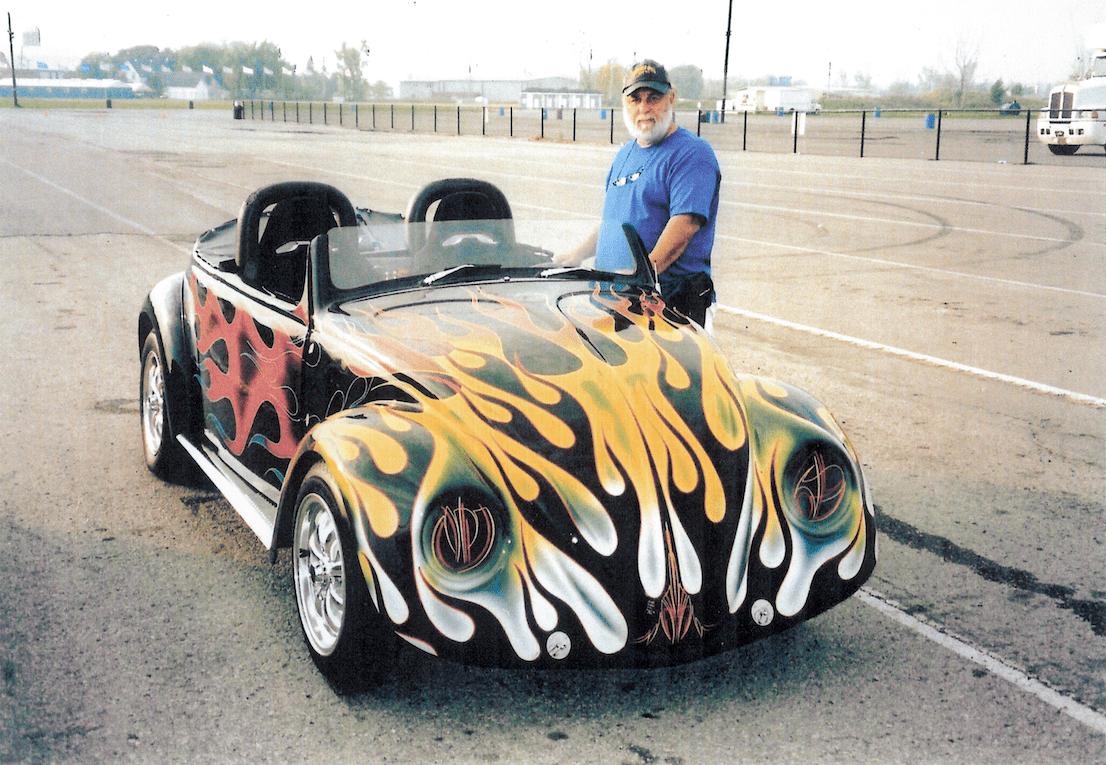 Sam shares a similar mindset when it comes to current cars. He feels they’ve lost their character. “When cars used to be designed, they’d go after character. Now it’s ‘Let’s throw this up upside down, put some wheels and lights on it and someone will buy it.’ They forgo the thing that made the car industry great − the feel itself.”

He jokes how he could strip the Dodge badge off his Journey, slap on a BMW roundel and people would assume it’s a BMW. He’s not too optimistic about today’s car industry and where it’s going.

“People aren’t interested in what their car is anymore. It’s just transportation. That whole era is lost.”

What are your dream cars?

Once his prospector-like voice settled, I prodded to determine what two dream cars he’d park in his garage. Sam’s unicorns? The 1939 Ford El Matadaor and Chevy’s 1955 Aztek Radical Custom.“If I had either one of them I’d be driving the shit out of them. All the time I’ve been around, I’ve never had any of my cars in the garage. I’d drive the hell out of them.” People would mock and scoff at Sam when they’d see his heatless 1934 Ford plowing through a foot of snow. He drew aim at the car culture in California, where people would put their hot rods in the garage if someone “pissed off their own porch within a mile of their car.” 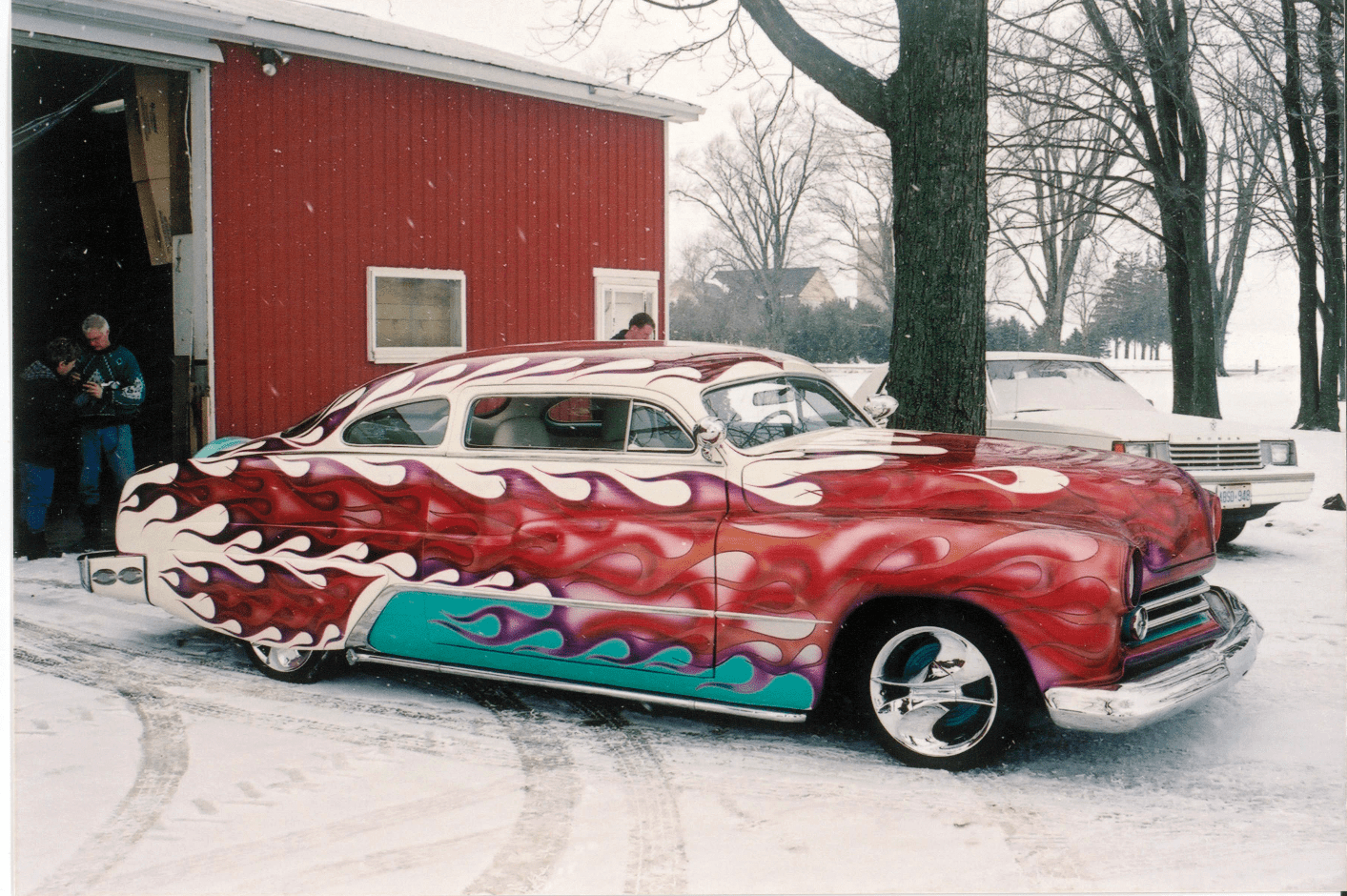 I quickly scribbled down notes as our conversation went deeper into a canyon filled with tales. “People would say ‘Why don’t you wash the car? There’s poop all over it. … and I used to tell them paint companies would pay me to test out how well their paints held up with poop on it over time. People would believe me, but I was just lazy and didn’t want to wash it.”

Shy to drop the words “new cars” on him, I briefly prodded, leading to a quick, “maybe a Rolls or a Lamborghini or something like that.” I paused for a second to imagine an Aventador canvassed in Sam’s flames.

Knowing he had done paint work with Chrysler on the PT Cruiser when it launched, I asked his thoughts on automaker’s retro designs attempted over the years. How about Ford’s early 2000s tribute to the original Thunderbird? “It looks as close to the old T-Bird as Mickey Mouse looks like Donald Duck,” he barked back.

But “Yosemite” Sam does have a liking for Chrysler’s Prowler, a car that was made to mimic a hot rod. When Chrysler reached out to him to put blue flames on one in their headqurters lobby, Sam tried something different. He literally lit it on fire.

“I took a torch to the car, let the black smoke ink on, then put clear over it and it stayed. We were experimenting at the time.”

Sam’s always wanted to inspire youth, and used his radical 1971 Ford with bubble skirts that went into the doors to prove a point that you didn’t have to spend “50 grand on a boat and not drive it.” Rather, you could create a cheap, yet radical, ride by putting a few dollars into it.

What is he driving now? Well you might be surprised. After slimming down his collection of rolling art, he holds the keys to that aforementioned Dodge Journey. No word on if that crossover has gotten the full “Flame Doctor” treatment.