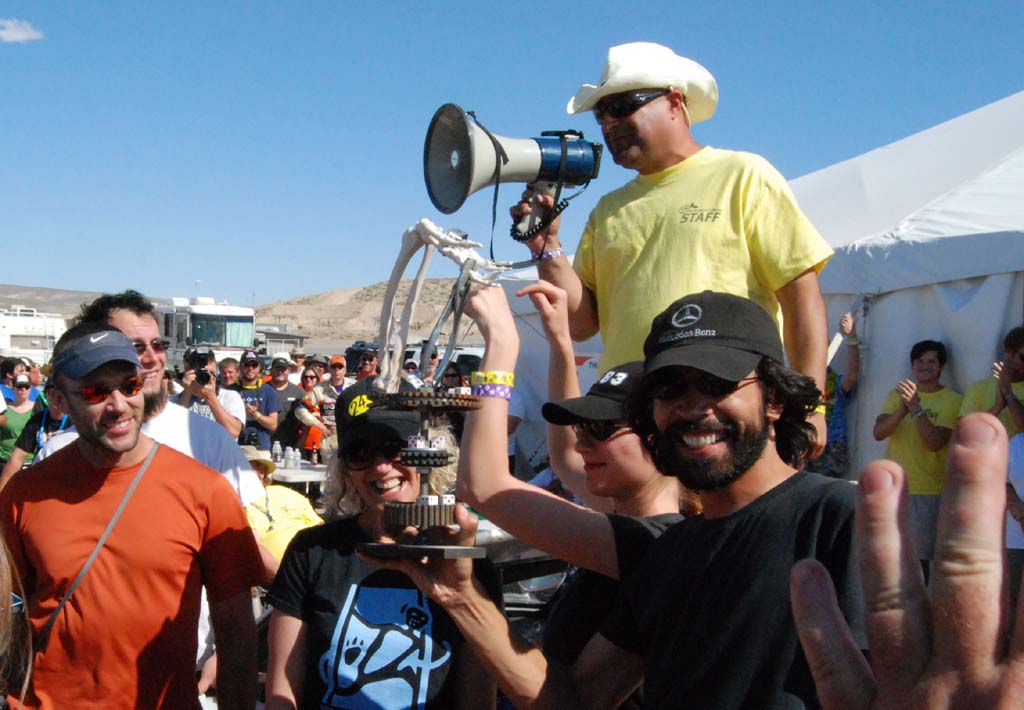 As every follower of the 24 Hours Of LeMons knows, the racers will do just about anything to get one of Jeff Glenn’s trophies to display in their Pabst-and-90-weight-reeking garages. When Jeff gets the LeMons Trophy Assembly Line going, he manages to crank out these masterpieces at the rate of one per 15 minutes. Me, not so fast; the MLTGTFBBTCPB trophy, awarded at the Goin’ For Broken LeMons at Reno-Fernley Raceway last summer, took me an entire afternoon to build. That’s why I’m going to force y’all to admire my one serious LeMons trophy in excruciating detail. I hope I don’t screw up the layout of this post too hideously; this is my first try with this editing interface, so have patience. 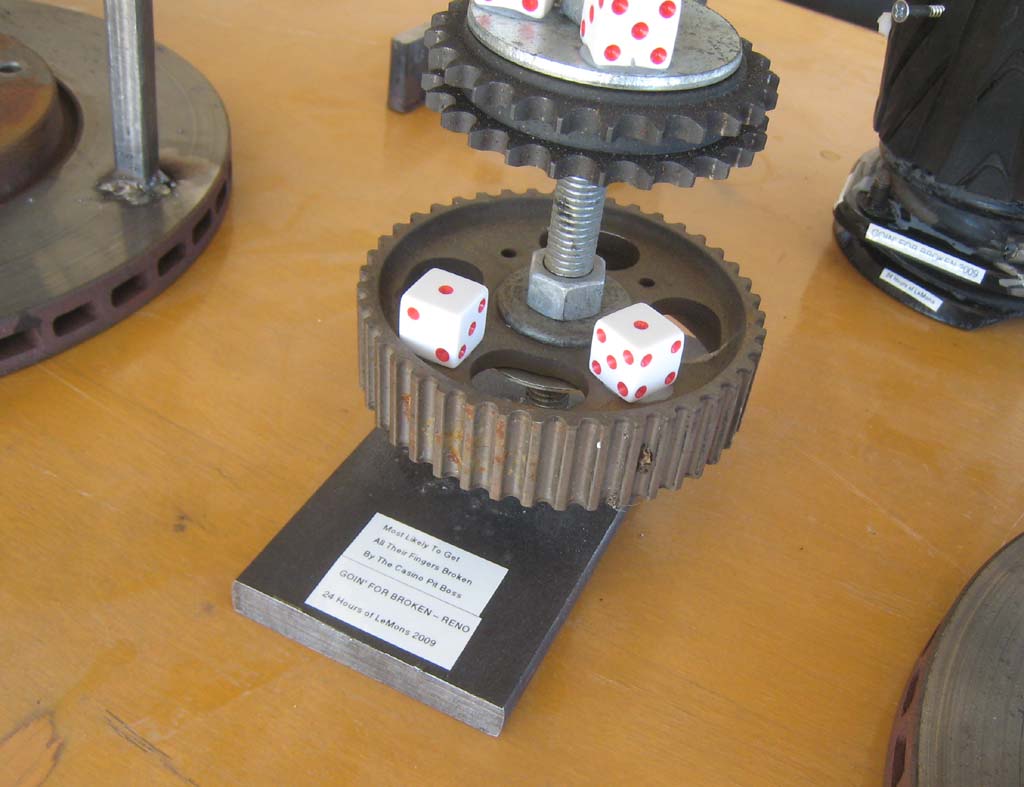 I call it my “serious” trophy because we’ve improvised all sorts of quickie trophies at races. We’ve given away my Dealer’s Choice board game, cases of bribe beer, random chunks of broken metal found on the track and stuck together with the Arc Angel’s welder, a single nickel, and many of the car books I’ve reviewed on Jalopnik as prizes for teams we thought deserved something.

It all started back when I was a ’68 Mercury-drivin’, gas-siphoning, Dark Angel-rockin’ hoon, when I did my best to lower the property values of UC Irvine. I figured out pretty quickly that wretched-musclecar-drivin’ East Bay jamoke like me would never get anywhere with the wholesome Republican girls out of La Habra and El Toro- much to my disappointment; there’s never been any woman sexier than a pink-lipsticked 19-year-old La Reagan Youth chick from an exclusive Orange County subdivision, circa 1985, unless we’re talking about the fearsome Dentist Dom out of your most nightmarish Channel-locks-on-molars dental fetish- and so my only chance to avoid getting Maced every time I tried to talk to a member of the Other Team would be to do the Weirdo Artist Thing and charm the goth girls with my artistic sensibilities. So I did. I switched my major from Mechanical Engineering to an unemployment-ensuring Creative Writing/Studio Art double major and started my short-lived career as a sculptor. You can see one of my larger steel projects between the trailers (it was eventually set up in the garden of the bulldozed-by-the-man Irvine Meadows West trailer park, where it was anchored by a Chevy 283 block I had lying around; after a decade or so, The Authorities tore it down because drunken frat boys were climbing on it). In fact, my trailer itself was a “performance-installation piece,” complete with title printed on a 3×5 card on a stick in front. California taxpayers should feel pride that I received class credit for this major artistic triumph. 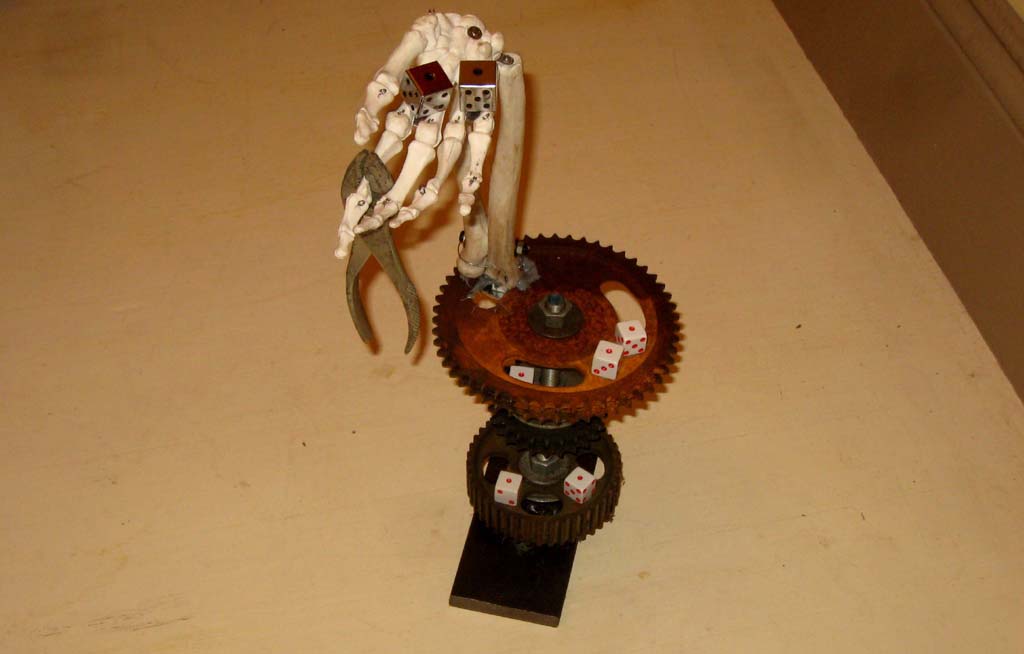 But I’d never actually been paid for a sculpture, and that grated on me for many years. How could I consider myself a real California Artist if I hadn’t gone pro? So, Chief Perp Jay Lamm told me I could bill him for parts and labor on a trophy for the Goin’ For Broken race, and I decided to make my trophy the traditional race-specific prize we always give out, the one that goes to the team that best embodies the local version of the LeMons Dream. At LeMons South, it’s the “Team Most Likely To End Up In The Lake Full Of Poisonous Snakes” trophy, at the Lamest Day, it’s the “Most Likely To Set The Cuyahoga River On Fire” award, and so on. 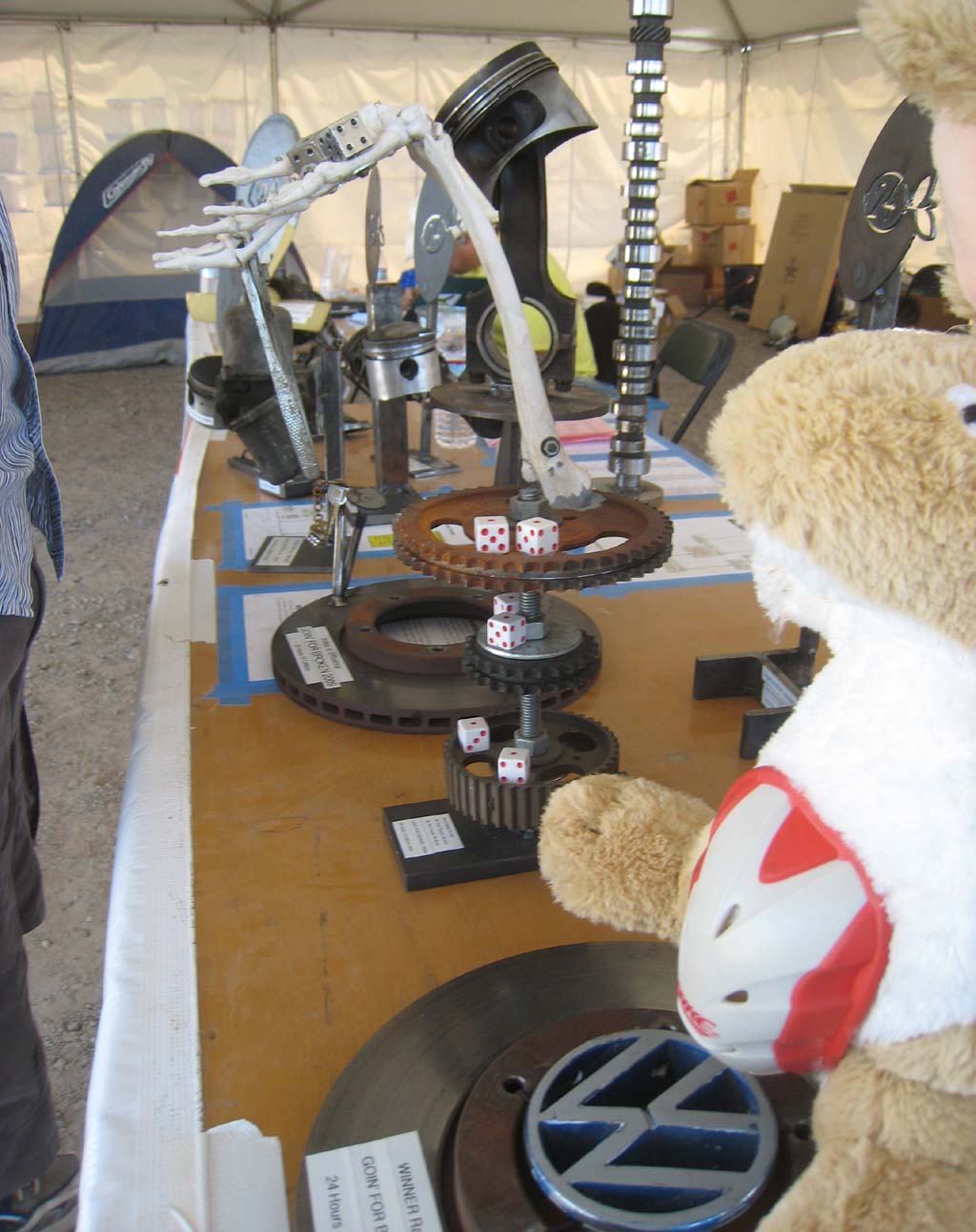 I started out with a standard steel LeMons trophy base, which Jeff mass-produces as the first step in the Trophy Assembly Line process. It’s a heavy bastard, which means you can go pretty top-heavy. I knew I’d be doing something involving dice coming up snake-eyes, so I went right to eBay and found some cool chrome Marlboro “This Is Your Big Day” dice. Smokers are cool! 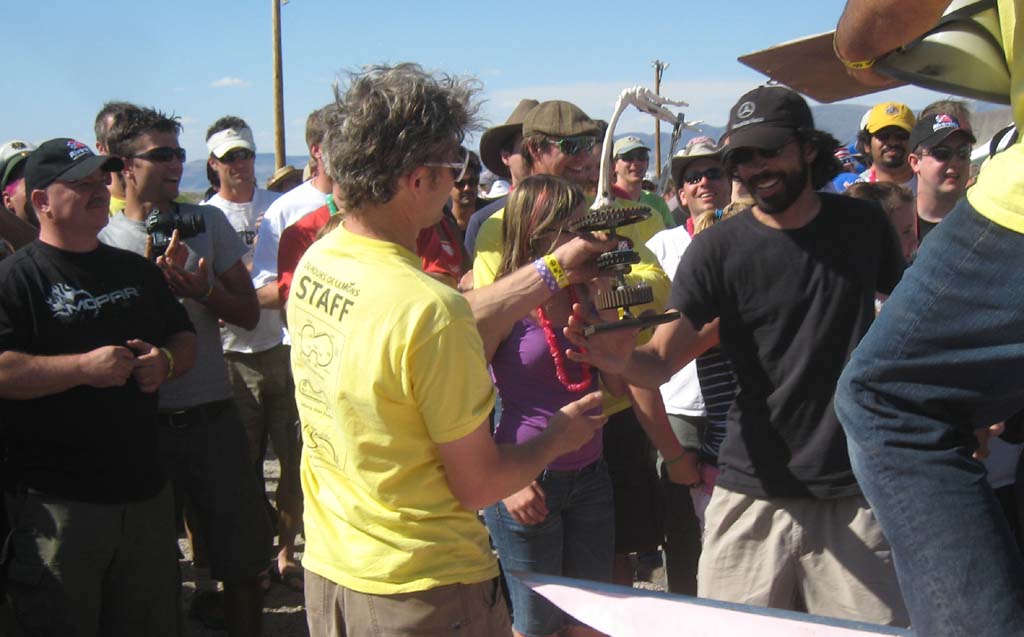 I dug through my collection of random car parts and found both timing chain gears from a Chrysler 440 and an upper timing gear from a Toyota 3E (one day I plan to use that 3E head, now equipped with a pulley instead of a gear, to control a cam-operated mechanical drum machine… ah, projects to be undertaken in the far, far future). I welded a chunk of threaded rod to the base, sandwiched the three gears between nuts, and had the foundation for the MLTGTFBBTCPB Trophy done. After that, a bunch of regular plastic dice and some JB weld made the gears look more Nevada-esque (if only I could have fit some Trinitite into the trophy budget!).

What I had in mind was a skeletal hand proffering snake-eyes and experiencing the pliers-on-knuckles treatment that card counters get during a standard casino “backrooming” session. Fortunately, I had the skeletal arm already, courtesy of the Arse Freeze-a-Palooza incarnation of the Black Metal V8olvo, the skeletons having been retired when the V8olvo became the Mustard Yellow Volvo Doing 45 In The Fast Lane and the skulls repurposed for use in the Screaming Skull Brake Lights (which I built back in January but never got around to writing up until last week). With much JB Weld and some strategically placed drywall screws, the arm was in place. The whole mess took me a full afternoon to build, or approximately 20 times as much time as Jeff requires to make much cooler trophies (remember, I’m the guy who took four months to rebuild a Chevy 400), so I decided that my career as a professional sculptor would begin and end with this piece. 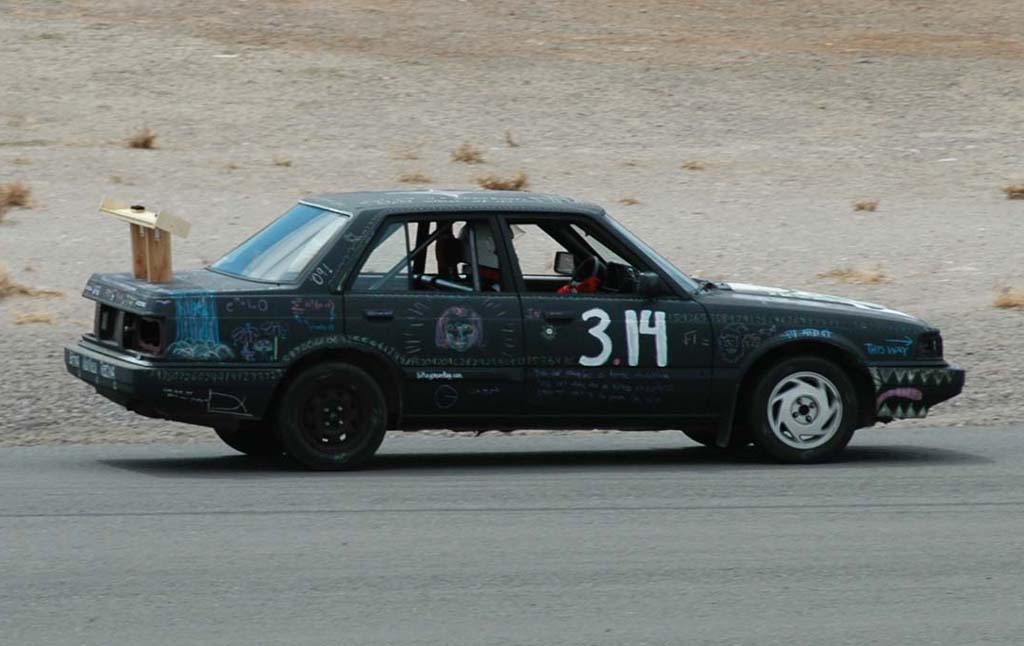 There wasn’t much argument about which team most deserved the MLTGTFBBTCBP Trophy: Biting Monkey Racing, a bunch of teachers from SoCal who drove their truly horrible Accord all the way to the track- trailers make you weak!– and then proceeded to drive… very… slowly… around… the… track (fortunately for their pride, the Junkyard Dogs’ “Mad Max” Supra was even slower). They’ve got their trophy front-and-center on their web page, so I assume they’re proud of it.
OK, rant over. I’ll try to come back and do a post here now and then, though I’m trying my best to get some more stuff up on MurileeMartin.com and should probably concentrate on that for the time being; once that site is worth reading, I’ll enable commenting on it.