Given the twisting roads and loose surfaces that make up most rallying stages, it would be logical to choose a small, chuckable car for such a purpose.   However, in the days before works-backed team and professional drivers, rallying was full of big, luxurious cars….all the better to carry the well-heeled adventure seekers that populated the stages in those days.  What follows is a selection of rallying luxobarges…..which one is your favorite? 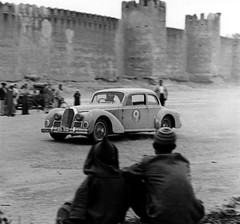 First, we have this lovely Talbot-Lago T26, as piloted by Jean Keurgen at the 1950 Rallye du Maroc.  While not the ideal width, length and weight for the stages, its 4.5 liter, twin-cam six, capable of making 190hp, was not without its charm…or usefulness.

Next, there’s the Jean Trevoux-Roger Crovetto Delahaye 175S, bodied by Motto, which won the 1951 Monte Carlo Rally.  Trevoux and Crovetto also drove the same car in the 1950 Carrera Panamericana.  While its alloy bodywork probably didn’t like all those loose stones, it’s 4.5 liter ohv 6 (with 7 main bearings) was a steadfast source of power. 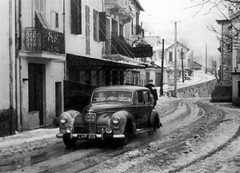 Not to be outdone by a bunch of bespoke French cars, the British auto industry contributed to our opulent collection with this series IV Humber Super Snipe, driven by Maurice Gatsonides and Count H.R.J. Roderick van Zuylen van Nijevelt in the 1952 Monte Carlo Rally.  The Series IV Super Snipe, equipped with an engine from a Commer truck was sturdy enough for any contingency. 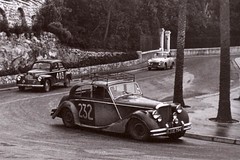 Naturally, Jaguar of Coventry has a place in our Grey Poupon carriage class of rally cars.  I wonder how many seconds per stage the burled walnut in their Mark VII saved Handley and Lucas during the 1954 Monte Carlo Rally.  The same 3.4 liter twin cam 6 that powered the Le Mans winning C-type moved this big cat at a more dignified pace.

By the early 1950’s, Mercedes-Benz returned to competitive racing with its new 300SL sports car.  And while the M198 engine proved its mettle in the Gullwing, a detuned version also powered this 300 saloon, driven by Ernst Lehmann and Walther Scheube during the 1954 Monte Carlo Rally.  What would Prime Minister Adenauer say? 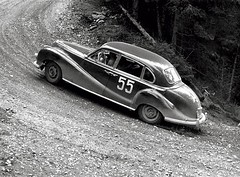 Meanwhile, BMW had much to prove to the motoring public.  So, they sicked their new, V8 powered, 502 saloon (a.k.a  Baroque Angel) on the stages at the 1955 Osterreichischen Alpenfahrt, with Alex von Falkenhausen at the controls.

So, you’ve seen the contenders….which one speaks to your inner Bertie Wooster?  Vote below in the comments.