As I write this, it’s the anniversary of when my wife and I first met and went on a date. This year isn’t a significant milestone, and a first date anniversary is not an occasion for major theatrics anyway. We only celebrate by ordering Chinese food, like we ate on the floor of my new apartment, right before she helped me move in.

The General Tso platter that we both got (mine, chicken; hers, tofu) was surprisingly good that first time, so China House became our regular place for takeout. But for the last few years, they stopped living up to our expectations. We’ve since tried more than half a dozen other places in the area and we continue to be disappointed.

Which is how you’ll feel when you slap your classic car tags on a Mercury Mystique or Ford Contour. They appeared with such promise, and to rave reviews.

Ford developed this Tempo/Topaz replacement in a renewed effort to create a “world car” — that is, one that could be sold globally with minimal changes to its design and features. The idea is to spread out the development cost through higher global sales volume. Knowing that “mundo” is Portuguese for “world,” I’ve always assumed that the “Mondeo” badge worn by its European counterpart is a pseudo-Latin attempt to sound classy. You know, like Kia and Hyundai do.

Car and Driver named it in its 10Best cars for three consecutive years, starting with its introduction in 1995. Motorweek granted the car its Driver’s Choice award.

That V6 — at least in U.S. guise, since that’s my only frame of reference — was a harbinger of things to come for Ford. Versions of that architecture would power Fusions, Escapes, plus a Jaguar, a Lincoln, and many other Ford offerings and their Mazda siblings all the way until 2012.

The SVT version of the Contour came with a bit more power and sportier suspension. It certainly has its fans. And the Noble M12 had a 400-horsepower version of the same Mondeo engine, thanks to a couple of turbos. It didn’t have the same glorious sound of the Japanese Busso, but it was heaps better than what GM and Chrysler were using at the time.

There was also a 2-liter Zetec 4-cylinder available as the base engine. Nobody talks about that much when it comes to Contours, but a 170-horse version of that one would later power the SVT Focus. 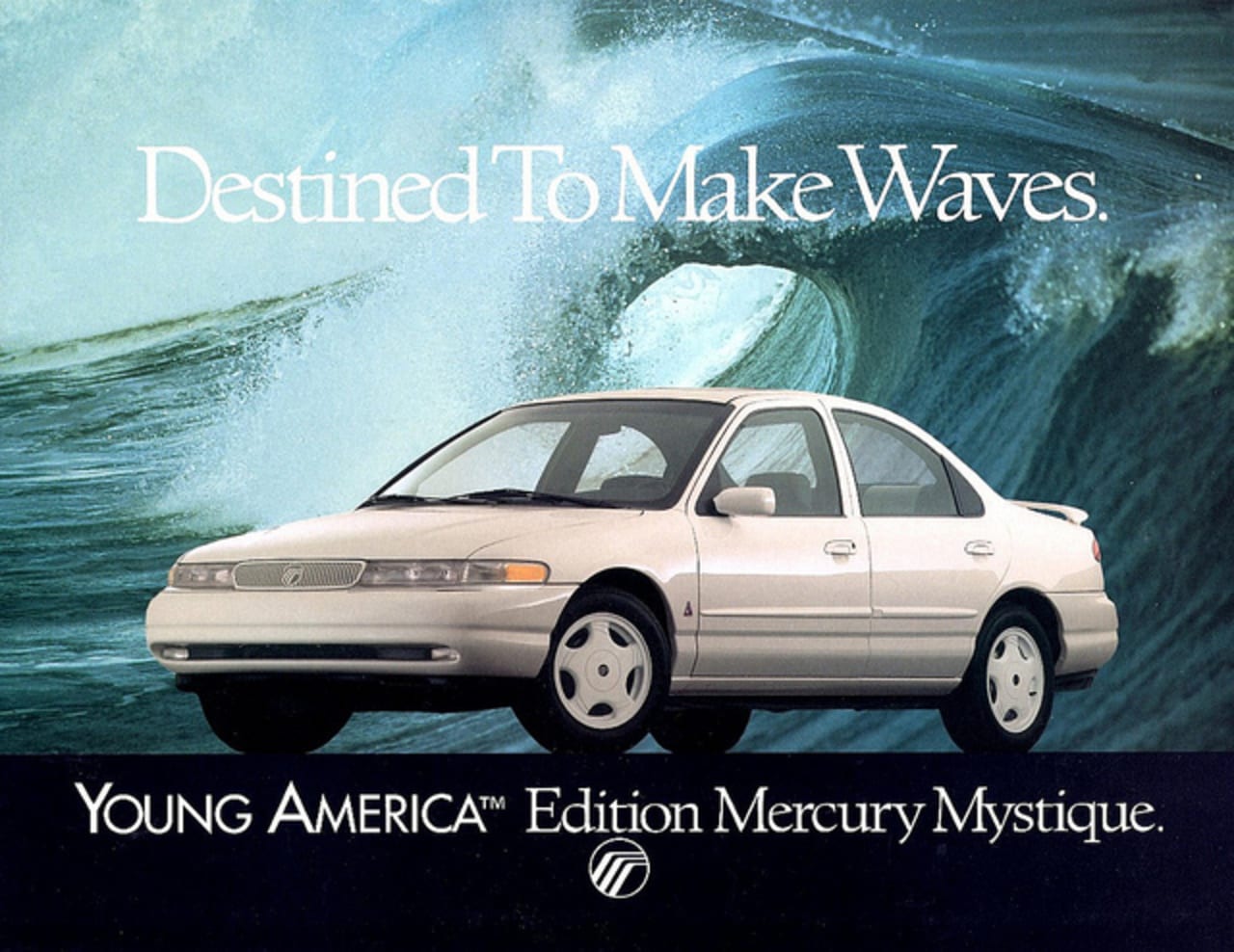 The U.S. market didn’t care much about the potential. Car and Driver later listed it alongside the Renault Alliance and Chevy Vega as its most embarrassing choices for 10Best winners, partly because it was much smaller than the Accord and Camry that it competed with on price. Even SVT Contour enthusiasts admit it has some serious flaws.

A friend of mine, Shawn Taylor, was a Ford service technician at the time, and quickly developed a relationship with the platform:

“They had a lovely wiring harness that would actually disintegrate. The dashboard that would curl up like an old shoe at the base of the windshield. The V6 manual had the wackiest torque steer. They also had a plastic water pump impeller that would just fall the f— apart. You have to remove the passenger-side axle to get the starter out.

I can’t remember how many recalls they had, but it seemed like there was a new one every month. I started working at a Ford dealer in 1997 and the Contour kept me quite busy. Ball joint recall, window glass recall, blower motor resistor and headlamp switch melting, something about the shifter bezel, I think it would not read the right gear position.”

Maybe that’s why I can’t find any pre-refresh Contours for sale, and only one Mystique — with a blown head gasket, for $700.

And they tended to disappear into the background, in spite of being advertised in this really strange way. (With classrooms empty due to a pandemic and the talk of an oncoming apocalypse, this ad would come off very differently today.)

Mercury allegedly built more than 200,000 Mystiques, but the only one I can ever remember seeing was the example that my friend’s dad had when I was in high school.

Despite being little changed from the Ford Mondeo, which appeared in Europe circa 1993, it looked like the same old bar of soap as the Escort. (To its credit, the mid-cycle refresh followed the path of the foreign-market Ford Ka rather than the jellybean Taurus.) 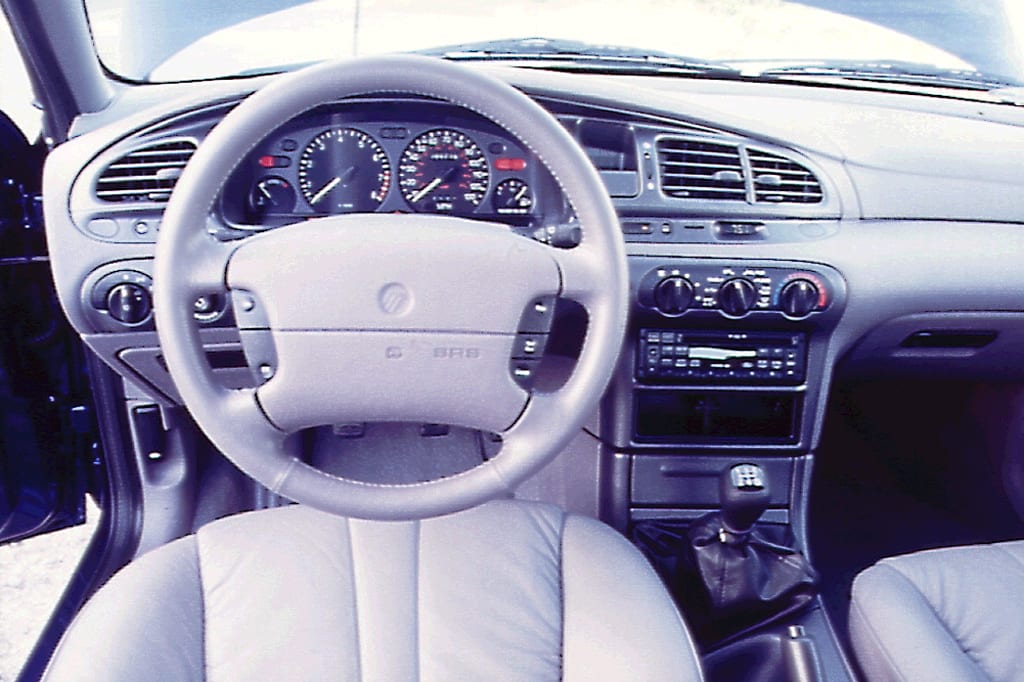 The Mystique is in its Current Rarity

These Mondeo friends had a remarkably short run. It was outlasted by the already-aged Ford Escort, a platform that had a minor refresh in ‘97 and continued alongside the Focus until 2003.

Ford didn’t offer a mid-size car at all after this (edit: until 2006, with the much-larger Milan/Fusion) so if you can indeed find a ‘95 Mystique or Contour that’s still running, you’ll have something once plentiful that is now plenty rare. The deathbringer to an entire segment of the automotive market. A car that was set up to impress, but ultimately disappointed.

All you need to round out the picture is some terrible Chinese takeout from a place you once loved, that you can eat, alone, in the cramped back seat of your Euro-inspired sports sedan, dreaming of the glory days of both your car and your life.

The Mystique scores a 7 on the Lamestain Index. Because it lacks pretense, the Contour gets a 5.

(My wife and I are still happily married. We also don’t own a Contour, which may be unrelated. We just can’t find any good Chinese food.)

About the Author: Alan