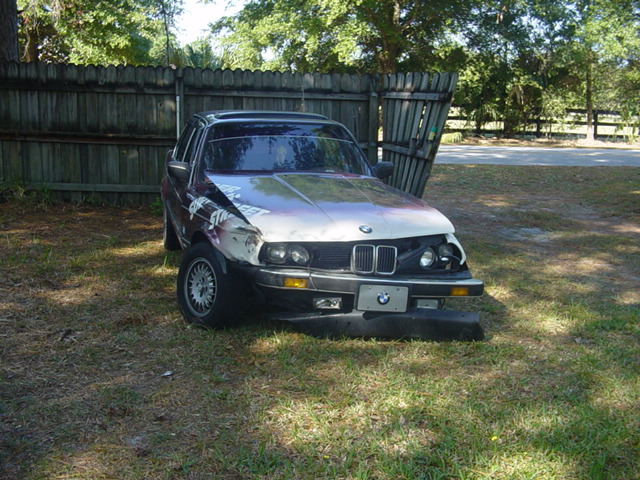 It’s New Year’s Eve and this olelongrooffan is home by 8:30 (I don’t like to mingle with the rookies this night of the year) and, as such, this will probably most likely be a long, wordy post in my “pseudo folksy” style so my fellow Hoons might want to grab a fresh cup of java, kick back and (hopefully) enjoy it. Oh yeah, Happy 2012. That Dearthair really knows how to throw a viral party, doesn’t he? On Friday, New Years Eve Eve, the esteemed Mr. Glucker posed the question “Is the era of new car surprise gone?” It reminded this olelongrooffan of the acquisition of one of the four E-30’s I have owned over the past decade and a half. The sedan in the above image was, yes, purchased from a salvage yard. I appropriated the parts I needed, sold a bunch more on all things that are the bay with an e, and sold the hulk back to a different yard for what I paid for it. I am a hoon afterall. The others….. 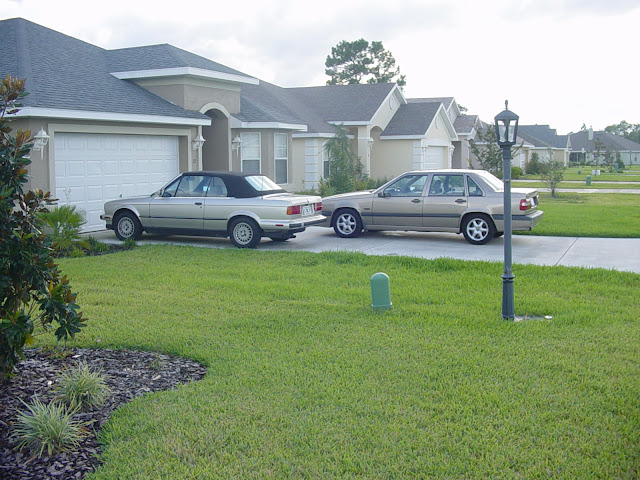 Unlike the wrecked sedan, all of the others were ragtops, affectionately known as oleragtops to this longrooffan. The champagne colored one in the above image is actually the second one I owned. As I owned, at different times, an ’87, an ’88 and an ’89, but not in that order, I really don’t recollect the year each one is. I found this one on ebay just after the new Mini was released. I was living in Naples, Florida at the time, had sold my Mercury Sable longroof and had driven my company truck to Miami to the new Mini store to pick me up one. Well my fellow Hoons, those thieves at that Mini store wanted $5,000 over the $20K sticker for one of their prized possessions. I basically told them to F off and spent the rest of the day on South Beach enjoying the sights. I returned home to Naples and got on ebay to see if I could find one there. This was prior to Mini having an ebay category of their own so I searched BMW. Although I wasn’t looking for one, this beauty popped up at a dealer just fifteen miles from me up in Bonita Springs. I drove up there and bought it for less than the ebay bid (I’m pretty sure there was some schilling going on) and brought it home. It needed a lot of work but hey, this olelongrooffan has seldom been into pretty and fragile automobiles. Over the years I owned it, I spent about five grand on it and it was in near immaculate condition. New paint, new top, new shoes, new leather interior, new struts and shocks, new rack and pinion arm….pretty much everything but an engine rebuild. Although it was a slushbox, I loved that oleragtop. It, along with my leased (stupidest automotive move ever) ’04 Grand Cherokee, made the move with me from Naples to Sl-Ocala, Florida a few years later. 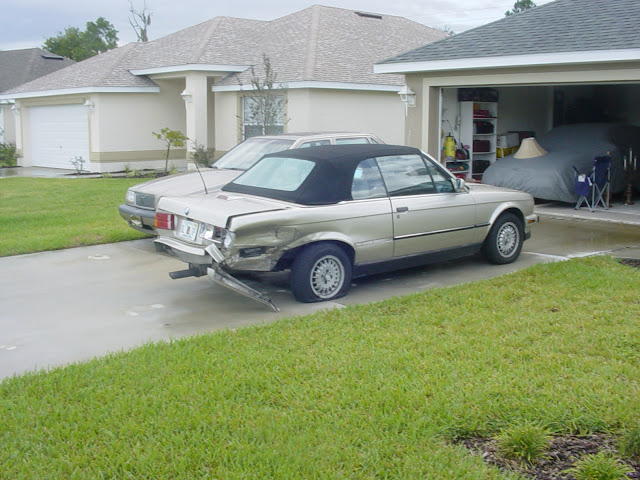 Of course, barely a year after getting it finished, while this olelongrooffan was turning left on a yellow light from a standing stop, some muffintop with two kids in carseats and a boy toy with slave earrings, and driving a POS Kia, ran said yellow light and clipped me in the ass end. The paramedics, after giving me the cursory post incident once over, noted this olelongrooffan had high blood pressure. “Hell yes I do. That girl just totalled my classic car.” And this olelongrooffan received a citation from that kind female FHP officer for violating that muffin top’s right of way. Should have fought that damn ticket. First accident I had been involved with in over 20 years. So, anyway, this olelongrooffan parked my wrecked oleragtop in the back of one of the warehouses where I worked, removed the battery and placed a body cover on it, all the while trying in vain to remove its demise from my mind. 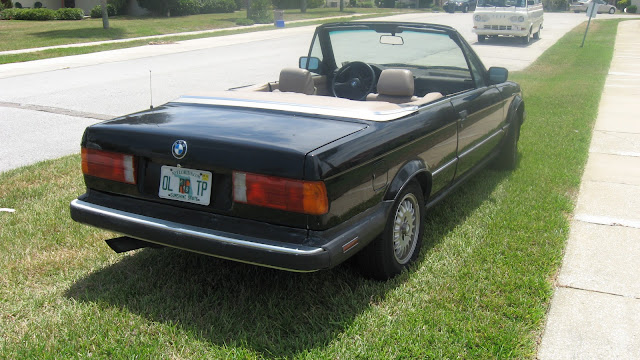 In the meantime, I had relocated to the Birthplace of Speed and was constantly keeping an eye on that list Craig has for a potential replacement for that wrecked oleragtop. One afternoon I spotted an ad for this black beauty for sale or trade. It needed everything my wrecked ragtop possessed; top, interior, brakes, struts, pretnear everything I already owned. I called the oleragtop owning dude up in Jacksonville, mentioned I had a Volvo 850 sedan I would be interested in trading for his oleragtop. “C’mon up and let’s talk.” I did and ultimately the trade was made and this olelongrooffan drove that oleragtop home to my Taj Mahal that afternoon. Ironically this was my third E-30 ragtop and his third 850. Not only that but I had an additional cool six hundred bucks in my pocket to boot! 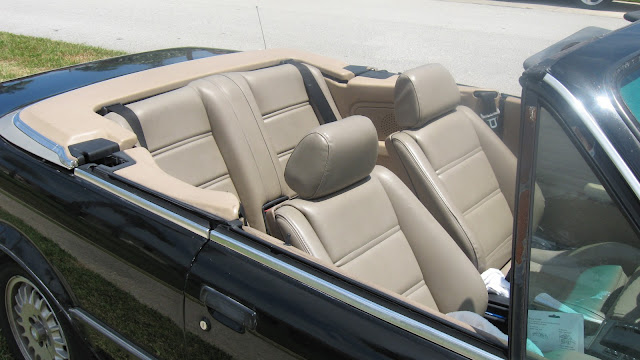 I retrieved that wrecked oleragtop from my former workplace and tow dollyed it over here and then I removed the clapped out red interior from my new oleragtop and replaced it with my nearly flawless tan one from my wrecked oleragtop, installed my newish top, pulled off a ton of other parts soon to be installed in my new oleragtop and sold that wrecked one to a salvage yard down near MickeyMouseLand. I hooned my new oleragtop around for a year or so and then came to the realization that living two blocks from the Atlantic Ocean is going to provide the opportunity for what ever vehicle I own the opportunity to rust rather quickly. So, in the course of just a few weeks, this olelongrooffan did a complete automobile shake up by selling both my olestationbus and my oleragtop and purchased my “pre rusted” Jeep Comanche. Yeah, in the two years, at the time, that I had moved from Sl-Ocala, I had owned an 88 F150, an 88 850, a wrecked 325, (hence my personal blog name, By The Numbers) a black beauty E-30 ragtop, an 88 Toyota Corolla (for a few miles anyway), a 63 Falcon station bus and, finally, a Jeep MJ. But my fellow Hoons can bet that this olelongrooffan has lusted after many others. So, on this hungover New Year’s Day, 2012, this olelongrooffan can hear all of my fellow Hoons screaming, mutedly, at the top of your lungs, “What the hell does this have to do with a “surprise car?” Well, it’s like this. It’s early 1996. This olelongrooffan is married to a wonderful woman and a great mother to our one year old daughter. I owned my own new home construction company in prosperous Naples, Florida. Lived in the typical mid 90’s dream home, 4 bed, 3 bath, pool home three short blocks from the beach, west of 41, oversize garage, daughter in private day care, then wife making a serious living as a Speech-Language Pathologist, more than his and her daily drivers in the out front, 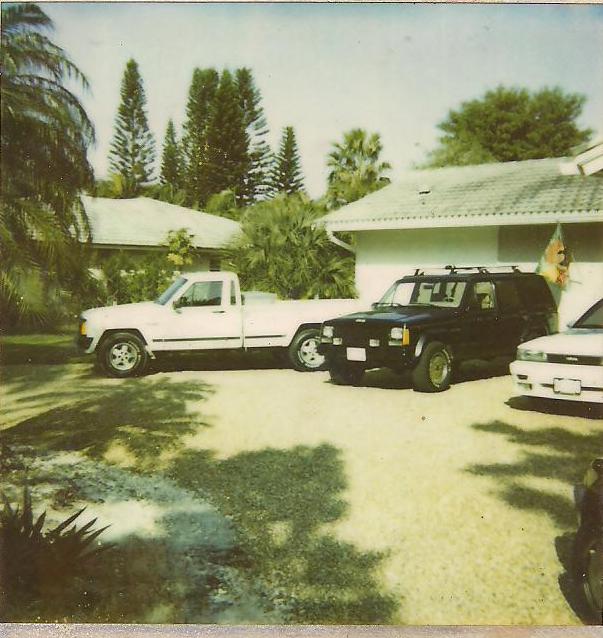 apps and tales at the beachside bar at one of the two local Ritz Carltons…you know that whole 90’s thing that we all were at least I was caught up in. So anyway, this olelongrooffan had a new model home in the Parade of Homes along with six or seven other builders. Now way back then, and even still now, the POH is a big thing for those of us in the residential construction industry. A highly publicized week long showcase of new model homes open for every curtain puller(known as tire kickers in the automotive world) in town to tour and make comments on. On the first day of the 1996 Parade of Homes, I sold my model home at full asking price with an attractive leaseback provision, providing me a new home selling location for the next year with no out of pocket expenses. Yeah, it was grand. On the way home that February 12th, I passed by the local Dodge dealer and spotted my first oleragtop in their “pre-owned” car lot. 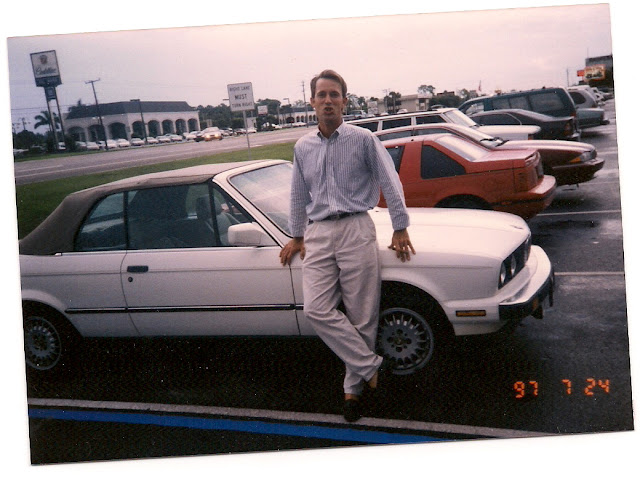 Yeah, that’s it in the above image with the worst expression on my face ever captured. My now deceased Uncle Frank (who owned nothing but wide track Pontiac convertibles for as long as I remember) took this picture way back in another century and another life. Anyway, this oleragtop was sweet. 50,000 miles, five speed, leather, ivory over tan and loaded with all the bells and whistles available in 1988. Yeah, sweet. I stopped in and spoke to Jerry, the used car manager I had remodeled a home for the previous year and ended up picking up this beauty for $8,000. The deal of the day at the time. 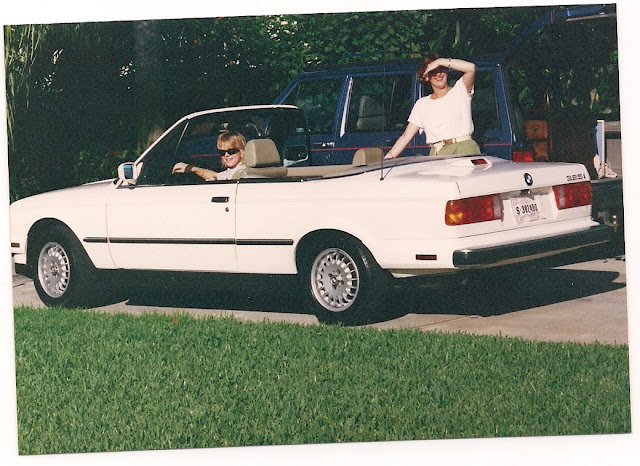 It was a fun car and my then wife and I certainly enjoyed the hell out of it the entire time we owned it. But the real surprise was when I brought this baby home. As I mentioned, I bought it on February 12 but told Jerry I would pick it up on Valentine’s Day, a couple days later. So on that morning, I rode my bike the few short blocks to the dealership and drove my new oleragtop home and parked it, with a big ribbon on the hood, in the circle drive out front of that pool home. I knocked on the front door and when my daughter’s mom answered the door, this olelongrooffan said “Happy Valentine’s Day”. Her response? “But I really wanted a minivan.” 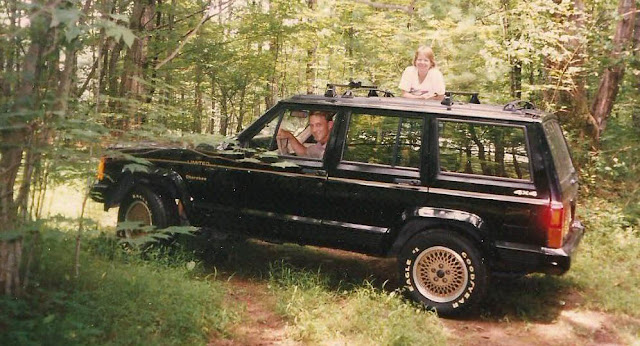 Well my fellow Hoons, that very day the Cherokee Limited you see in the above image was traded for a generic 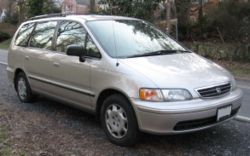 Honda Odyssey mini van which is still the daily driver for my no longer wife to this day. Oh yeah, when we split up, she so wanted that oleragtop but, trust me, this olelongrooffan was not about to let that happen and I didn’t. So, just to summarize, I would suspect the era of the surprise car has probably passed. But, ya know what? I’d do it again in a heartbeat. It sure felt good to pick up that oleragtop and to be able to present it to my lover as I did, minivan be damned. img src= minivan shot stolen from the web, all others by this olelongrooffan