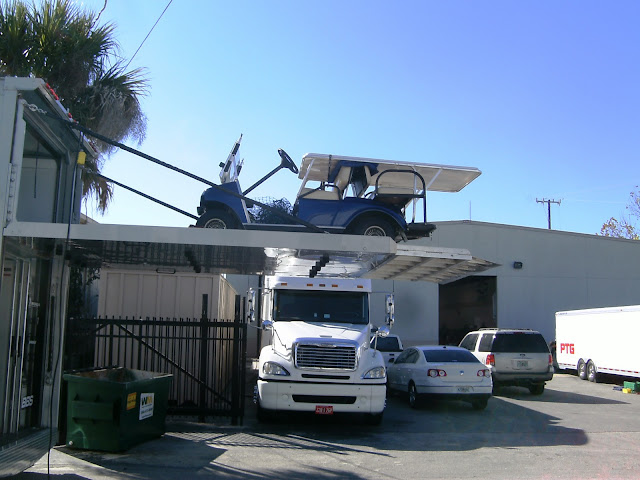 So, yesterday this olelongrooffan was headed out to that big box retailer that loves Jimmy Johnson so much to pick up some materials sufficient enough to keep Manuel Labor and myself busy for the remainder of this long assed week after New Year’s 2012. As usual, I made the effort to drive down the always fun Carswell Street here in sunny, but freezing ass cold, Daytona Beach, Florida. As that trek was being made, this golf cart being loaded into the back side of that semi truck caught my eye. Especially since that said semi truck was bearing the marking of the 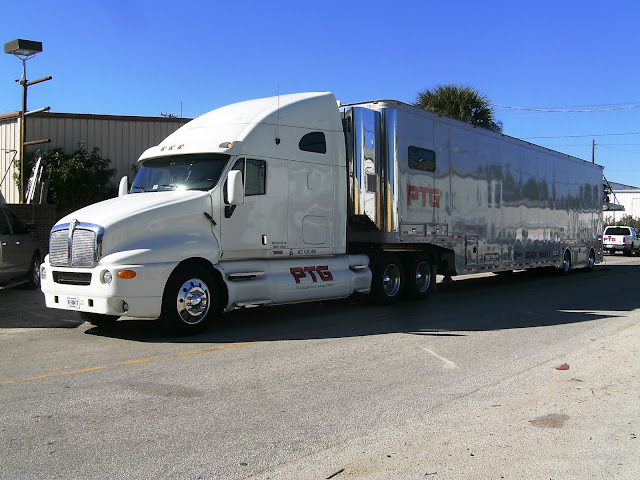 Prototype Transportation Group. Not only that, it was parked in the street of this light industrial complex area just outside 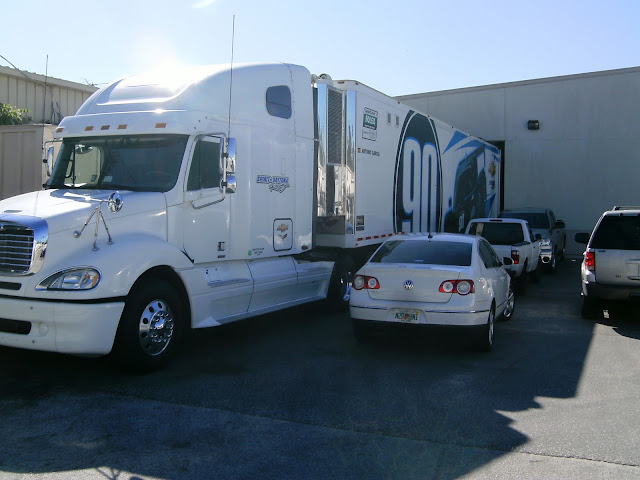 the home of The Spirit of Daytona Race Team’s world headquarters. Well, my fellow Hoons, this olelongrooffan pulled my beater, but paid for, Comanche pickemup truck into the nearest parking space and got out to see what could be seen. As I had stopped in at this shop previously, this olelongrooffan knew they were Hoon friendly and headed into their fancy fenced compound to check it out to share with my fellow Hoons. 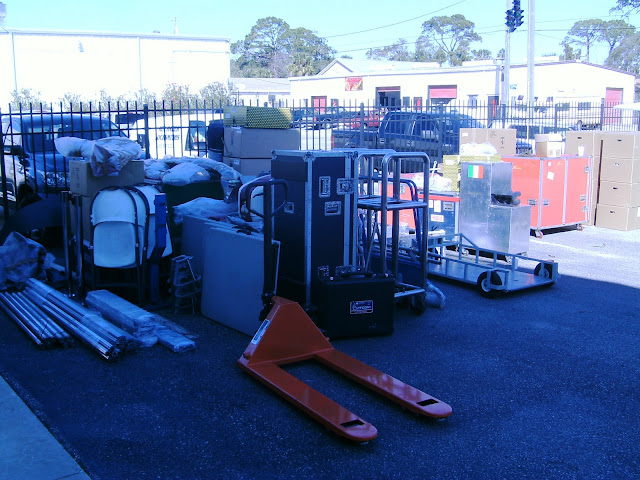 This weekend is the Roar Before The 24, the practice session for the Rolex24 Hours at Daytona race at the end of the month, out at the Daytona International Speedway and this shop area was abuzz with activity in anticipation of that event. In addition to a couple transporters, there was a big ass fifth wheel trailer into which all this support equipment was being loaded. 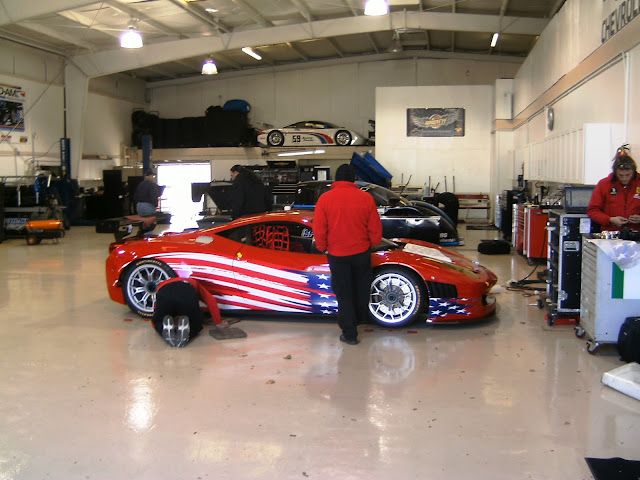 And in usual olelongrooffan fashion, I moseyed on into their sparkling shop area and checked out all their cool shit. The Ferrari in the above image was sporting Continental Tires so I am going to speculate it is participating in the Continental Series race, the Friday prior to the Rolex 24. Rest easy Hoons, this olelongrooffan anticipates knowing more after my attendance at the Roar this weekend. 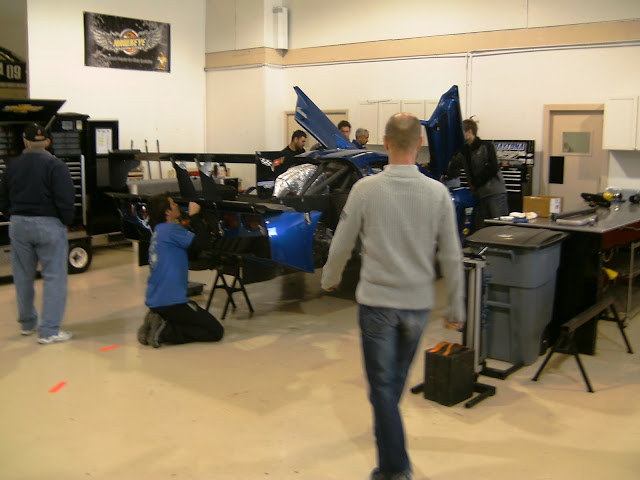 As I was walking in, one of the Spirit of Daytona head honchos who I recognized from the unveiling of the Corvette Protoype a few weeks ago mentioned to the guy in the grey sweater above, “Hey, you are becoming a familiar face around here.” Apparently a new driver for that team. 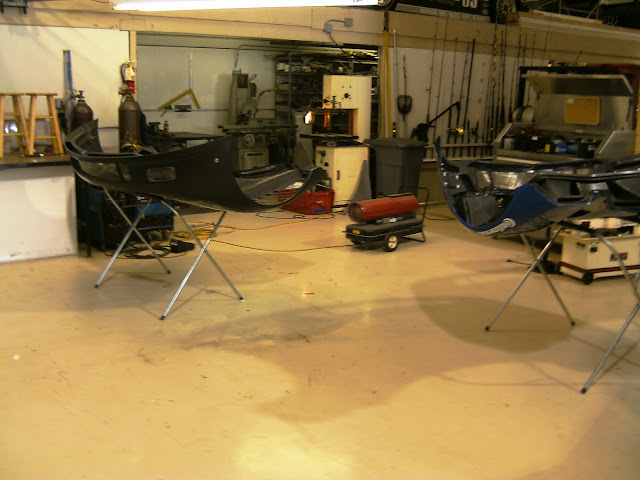 In the back of their shop, just under the prototypes on a shelf, these recently fabricated carbon fiber body parts were drying on sawhorses aided by that forced air heater seen in between the two of them. Come summertime, these things will dry in about two freaking minutes in the hot as hell lovely Daytona Beach summertime weather. Just a note, as I was wandering around, everyone checked me out but noone said a word about my presence in their world. The fact I was, unintendedly, wearing a Daytona Prototype pullover golf style windbreaker may have helped. (Even though it sports the last generation of the DP logo and I picked it up for ten bucks in the clearance section of the Grand Am event merchandise trailer a couple years ago). 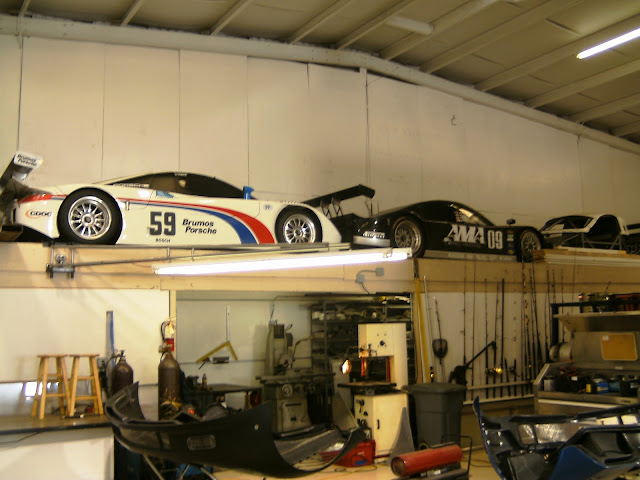 And my fellow Hoons thought this olelongrooffan was joking about the prototypes on a shelf. Not just one but three two and a half of those suckers. 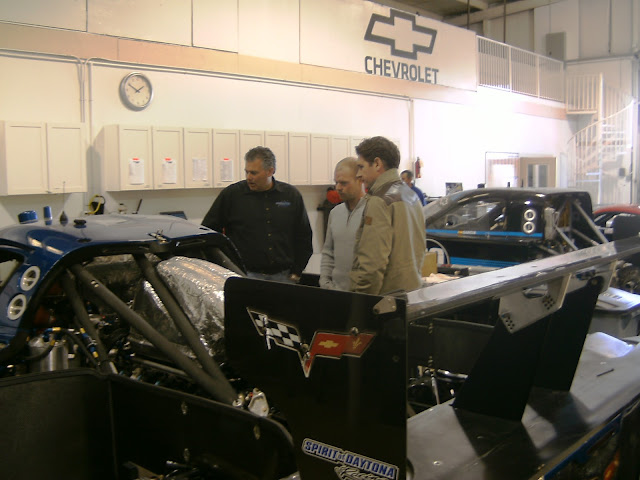 This image captures the owner (on the left) of the Spirit of Daytona team going over a few things with two of the drivers for the Rolex24. I overheard him talking to these dudes about the air flow through the ducts of this Corvette Prototype and how it enters in the rear of the car and exits through the front! Yeah, this olelongrooffan is still trying to figure that one out. 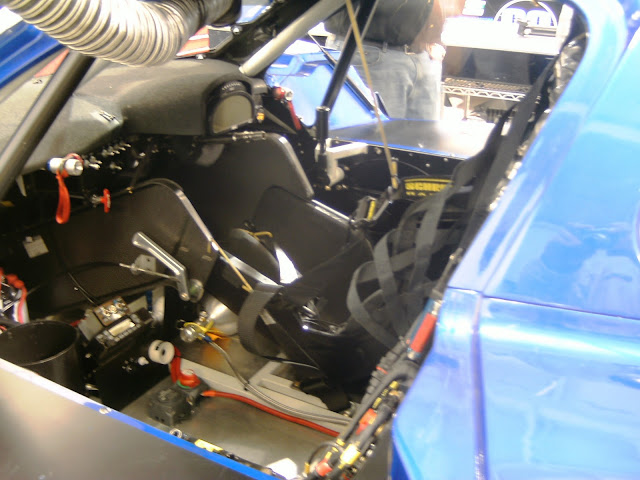 Meanwhile, I gathered a grainy image of the home of those drivers for 24 hours at the end of this month. Damn you elcheapo camera. And yes, this rookie got part of my image reflection in that shot. My apologies Hoons. 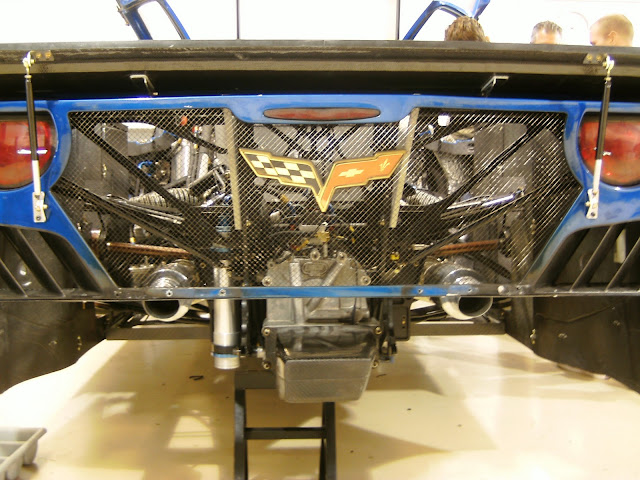 None of the engine images I got were worth a damn but this olelongrooffan is sure happy this one turned out for my fellow Hoons. Stay tuned over the weekend for further updates from the Roar Before The 24 and I hope this Hooniverse Truck Thursday is treating all my fellow Hoons well.