So this olelongrooffan was chatting it up with my brother, Bus-Plunge, the other day and he was talking about his bus. I mentioned he should write something up so I could share it with my fellow Hoons. Well, my fellow Hoons should make the jump to see and read more about it.

The bus is a 1954 Chevrolet 3800 series, 6 cylinder motor, 4 speed floor transmission, PTO (to drive the knife and scissor sharpening tools formerly in the bus), single wheels (pickup style on the front — I met a fellow Stovebolter through their forum who has a set of adapters to fit bud wheels — conveniently he lives 90 miles from me) and dual wheels on the back. The wheels are 17 inches. 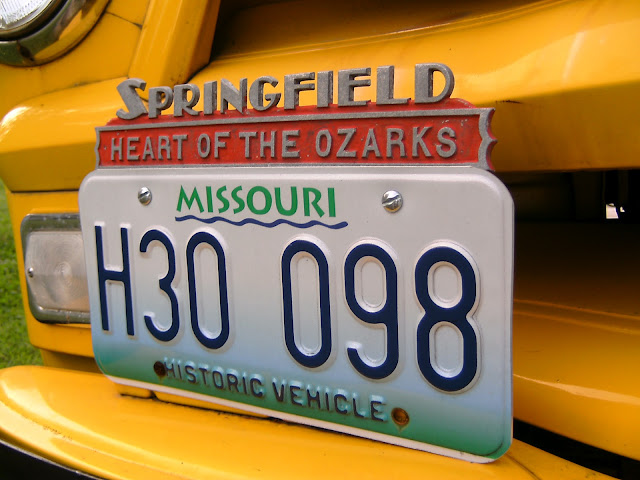 The bus was bought new in 1954 by a guy who sharpened knives and scissors in St. Louis, MO. When I bought the bus, my Mother and Father knew the bus and remembered it. There is a huge bell inside the bus and the sharpener would drive up and down the streets ringing the bell and people would bring out their utensils for him to sharpen.

Regrettably, I didn’t take any pictures of it before, when it was painted for knife sharpening business. I put school bus seats in it and my family uses it for parades and camping trips. It has duallies in the back and eight hole rims in the front. I can’t determine if those rear wheels are original or not. The lug bolt studs are short, which leads me to believe they are not original. The gauges, horn and lights all work. It has no flashing marker lights or stop sign arm. 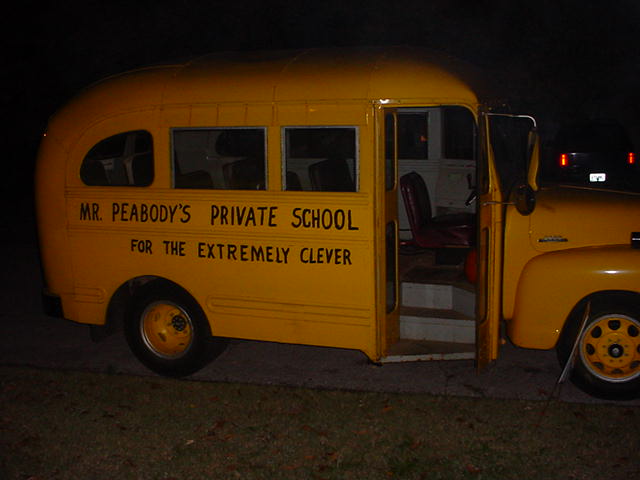 We “theme” the bus with tempura water paint for each trip. My favorite theme is “Mr. Peabody’s Private School for the Extremely Clever.” Each August a small German community about 25 miles away has a beer feast (Freistatt, MO). We paint the bus up
take the bus down there with a load of friends. I have a German beer mug collection and took the sayings off a whole bunch of comic mugs and painted them on the bus. I later found out they were risque sayings! What fun we have.

Our son and his friends painted it up as a hippie bus for their high school one day. We use it for birthday parties, parades, and Christmas caroling. We take all the grandkids and neighbor kids on a tour of Christmas lights and use it to shuttle our children and their friends on New Years Eve. I am the designated driver. I pick our two grandsons (8 and 6) up from school on Thursdays and Fridays in the bus. They love it! Nobody doesn’t like the yellow bus. Every time I get tempted to sell the bus again (I have had a lot of offers), I get outvoted by our children. When they were younger they hated to ride in it!

The school bus body is made by Wayne. A fellow bus enthusiast sent me the following email about the buses:

“Very interesting Crown.Was it built that way or was that an after school conversion? I’ve seen a few of those — mostly US mail versions. I thought they were long gone. Too bad Crown also went out of business. You can thank Carpenter Body Co for Wayne and Crown’s demise. Ironic you have two great examples of their work before Carpenter purchased them and buried both.”

I like old Chevrolet trucks. My brother, on the other hand is a Ford man. (I have never seen his wife so mad as when we brought a 1952 Ford dump truck home from an auction!) He and his wife raise miniature horses.

No biography of the LongRoofian would be complete without [edited for length and adherence to subject matter] and your continued enjoyment of these ramblings is certainly welcome.