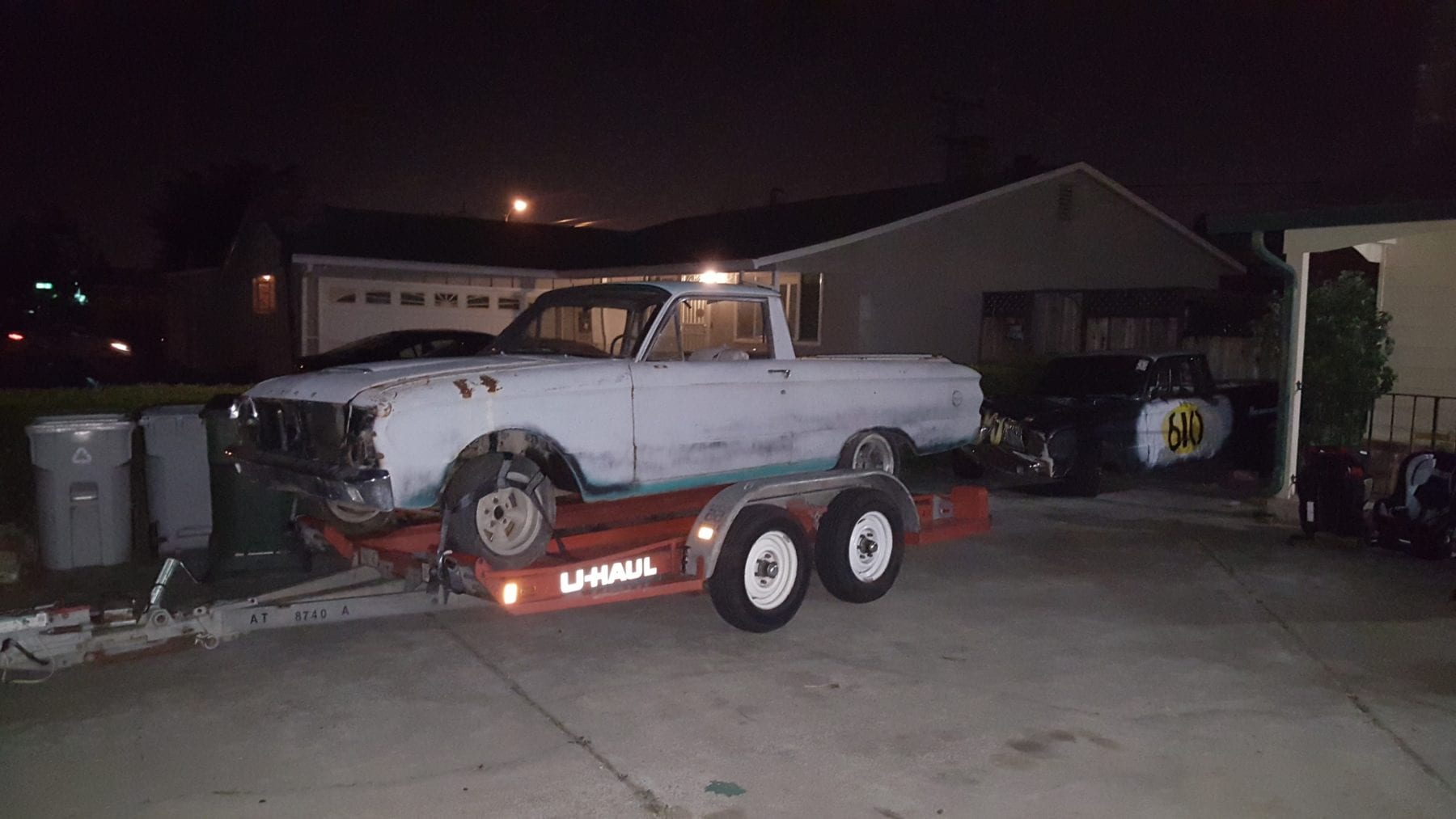 After our ’62 Ranchero became an object lesson for my dad’s physics class, a number of people approached us at the track offering to sell us Falcons or Rancheros. Most attractive among them was LeMons sometimes-staffer and generally awesome car guy Dick McClure‘s Ranchero (note the LeMons sticker on his Quail-attending car). The car inspected, a deal was struck and a trailer was rented. Click through for what we’re planning this time…

So, the details: it’s a ’62, made at what’s currently the Great Mall of Milpitas, formerly Ford’s San Jose production plant (same as our previous Ranchero and my Falcon). Originally equipped with a 170ci straight six and manual transmission, it now sports a 260ci V8 and 2-speed automatic. The running gear’s been converted to 5-lug V8 parts, but there’s no driveshaft, so it won’t be moving under its own power for a bit here. The biggest time suck of the first car’s build was replacing completely rusted out floors. These will need patches, but nothing on the scale of the previous car for sure. 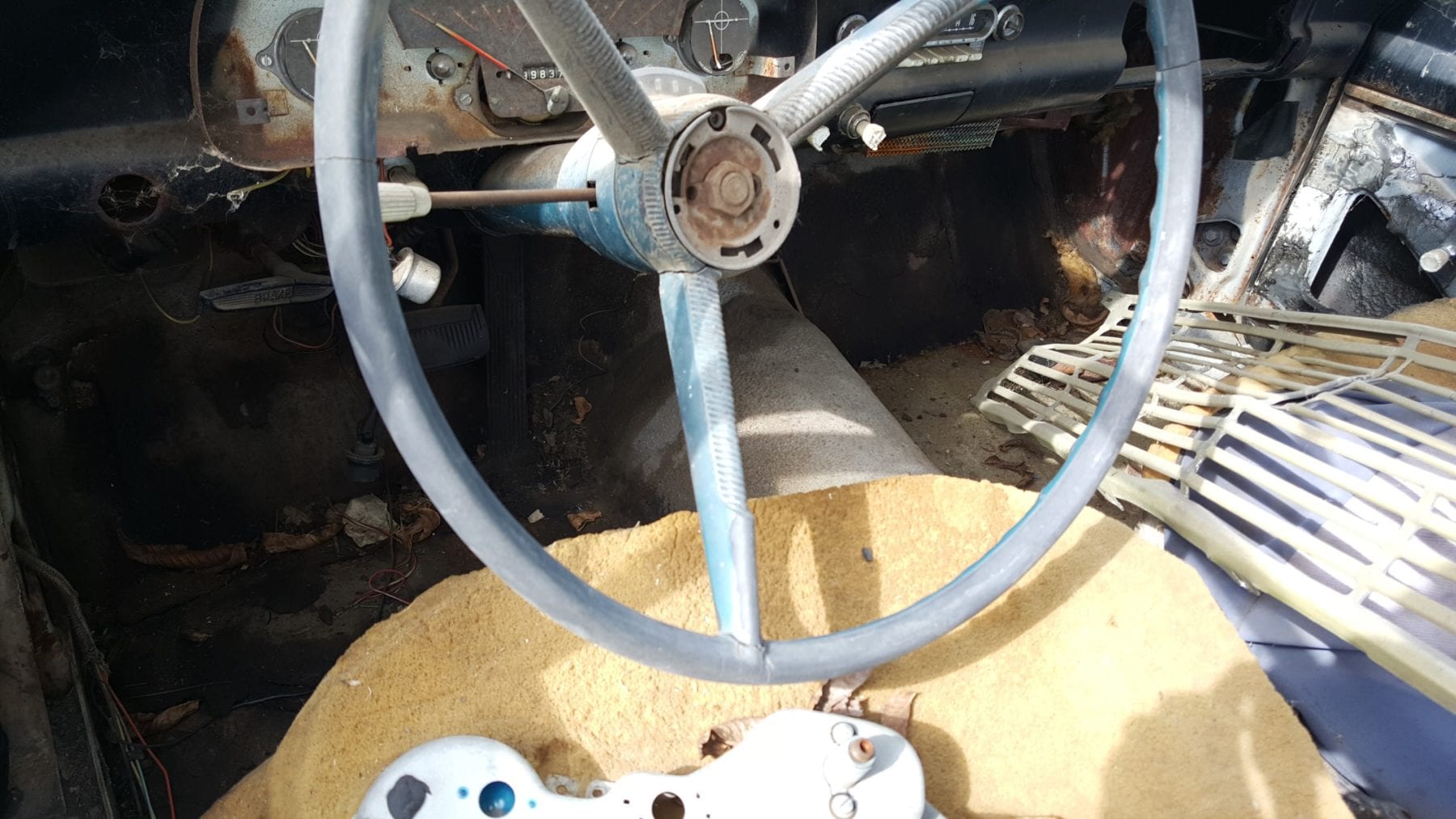 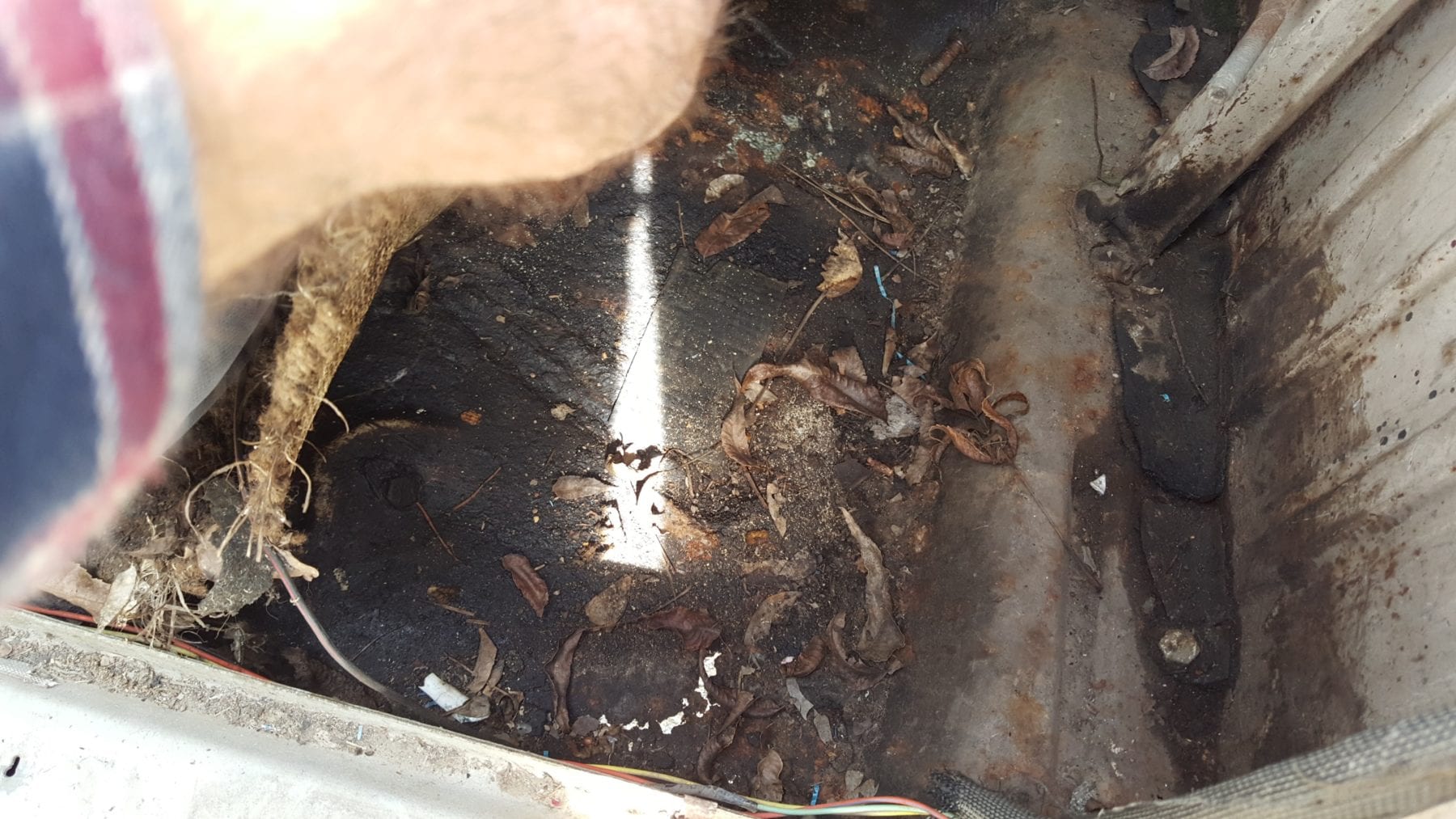 So, what’s the plan? As much as this will pain adherents to the Church of 1-5-4-2-6-3-7-8, we’re not planning on running that 260 for now. In its place will be a straight six, but not the the same straight six as last time. Well, similar: a 250ci in place of the former 200. Why stick with this terrible family of motors? Well, the 250 has a 50 more cubes, a broader torque curve and the same bellhousing bolt pattern as a 302. While a lack of power hurt us in previous races, our three speed transmission hurt worse. We could hang with traffic until that 2-3 upshift, then all joy disappeared. Next race: four speed! (possibly the four speed out of my Falcon if I feel like upgrading to a five-speed). 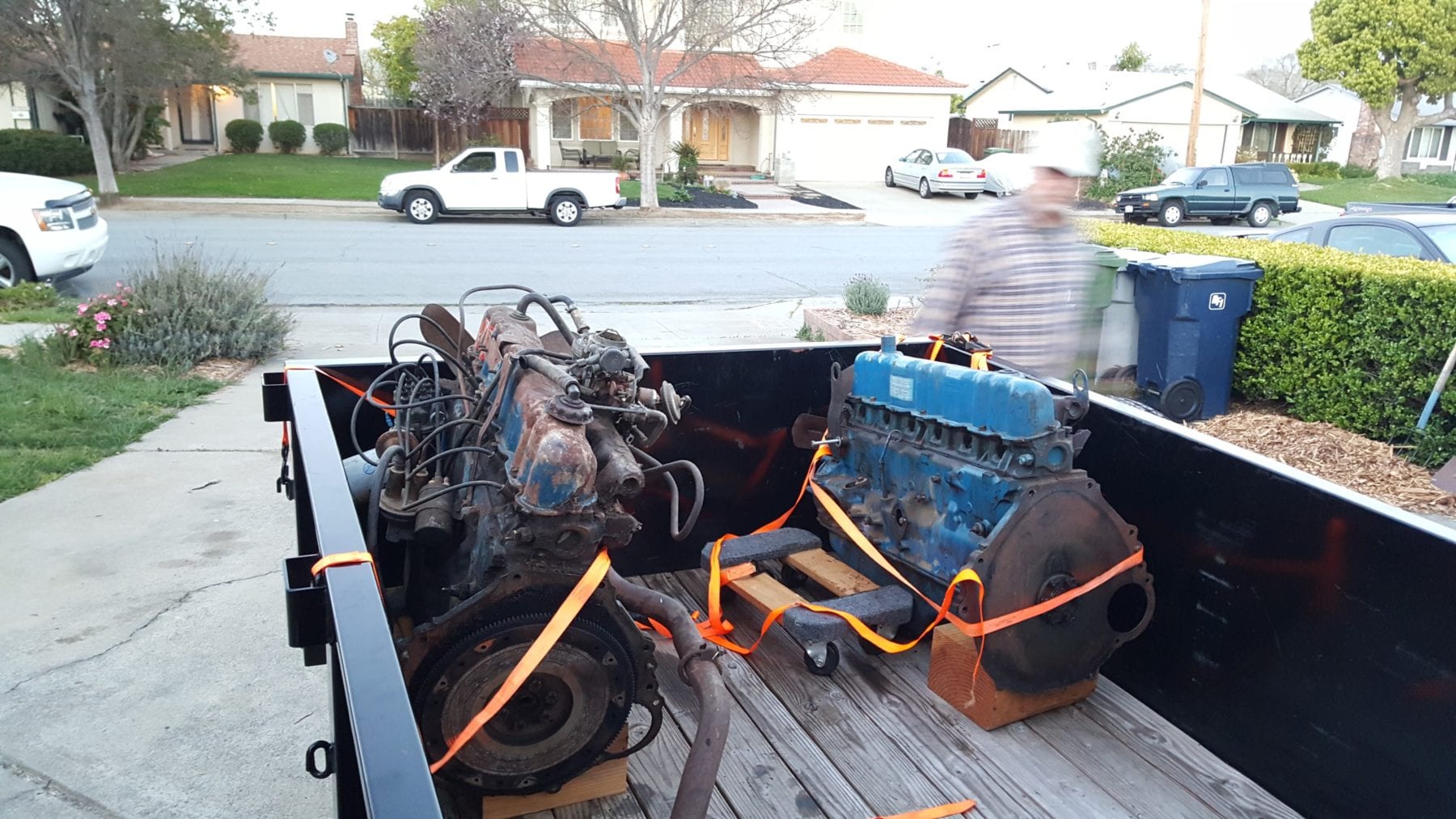 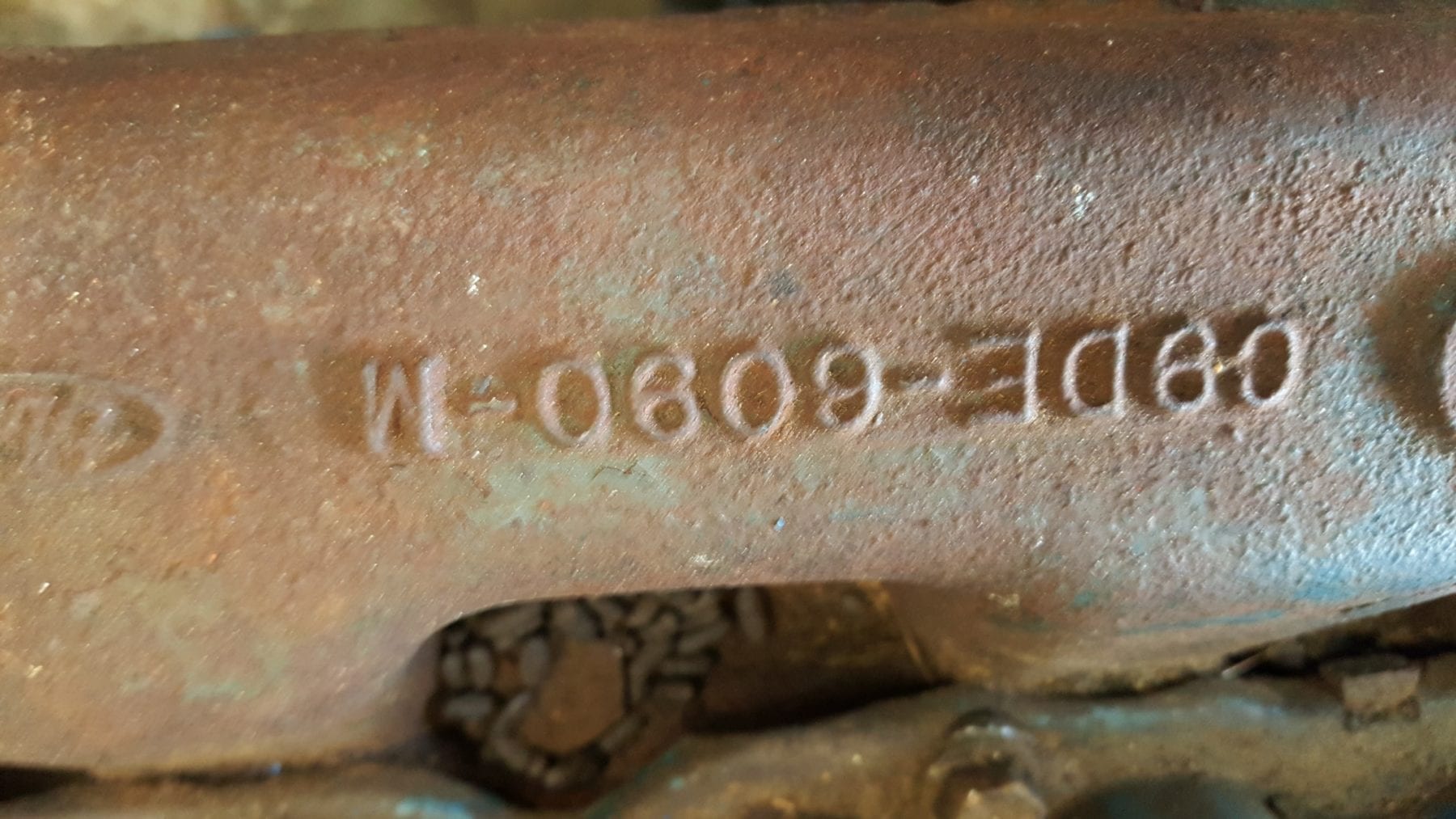 On the chassis side, we’ll be stripping all the lightly used steering and suspension bits off Crunchero and bolting them up here. One notable steering upgrade: we’ll be installing a steering box without the “spear of death” steering shaft pointed directly at the driver. Hopefully it’s obvious why. That’ll require a bit of creativity on the steering column side. In other safety-related news, it’s a toss-up whether we’ll cut two roofs off and do a cage swap, or just send it back to Evil Genius for a new one.

I haven’t quite given up on the idea of the Crunchero coming back to life at some point, but for now I’d rather not put that much body work (and probability of failure) between us and hitting the track. Oddly enough, it’s The Missus who’s most interested in running a Two-chero team. I can’t not take advantage of that level of enabling, right? Our first steps will be sawzalling or otherwise extracting the good bits from the Crunchero and literally decrapifying the pair of 250s we picked up, along with the new Ranchero’s interior. After that, it’s just a matter of bolting all the good stuff up, right?