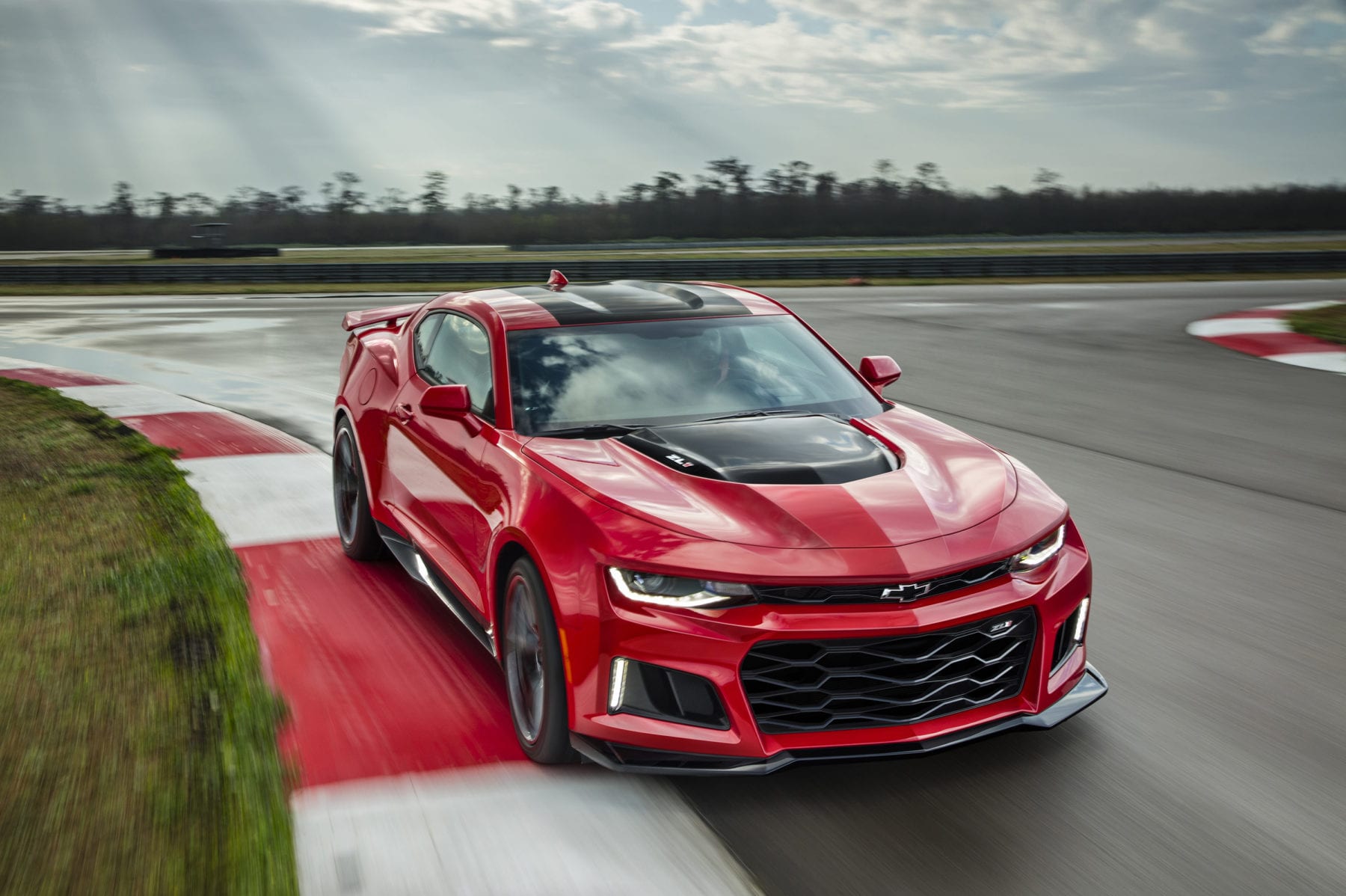 Last week Chevrolet invited us to the middle of the desert about an hour outside of Las Vegas to drive the new Camaro Convertible and try out the new four-cylinder turbo Camaro as well. The day we arrived, Chevrolet invited us to dinner. However, we were told to leave our cameras behind. That always means something interesting, but what could it be? We were shuttled to Spring Mountain Motorsports Ranch and at the front of the room was a clearly Camaro-shaped car under sheet. There was some speculation among those in attendance about what it would be. Is it a new Z28? A new ZL1? A Berlinetta perhaps? Something altogether new? After a brief discussion reminding us that Chevrolet’s performance division exists, the sheet was pulled back and the new ZL1 was unveiled. Within minutes, Chevy executives had us whipping around the track strapped into the passenger’s seat of pre-production swirly painted test mules with helmets and HANS. It’s a serious car, and it has the beans to back up its business. The supercharged rocketship of the Camaro lineup is back, and this time it can actually turn corners, too. For a video of our on-track action, and more photos of the car, click the jump. 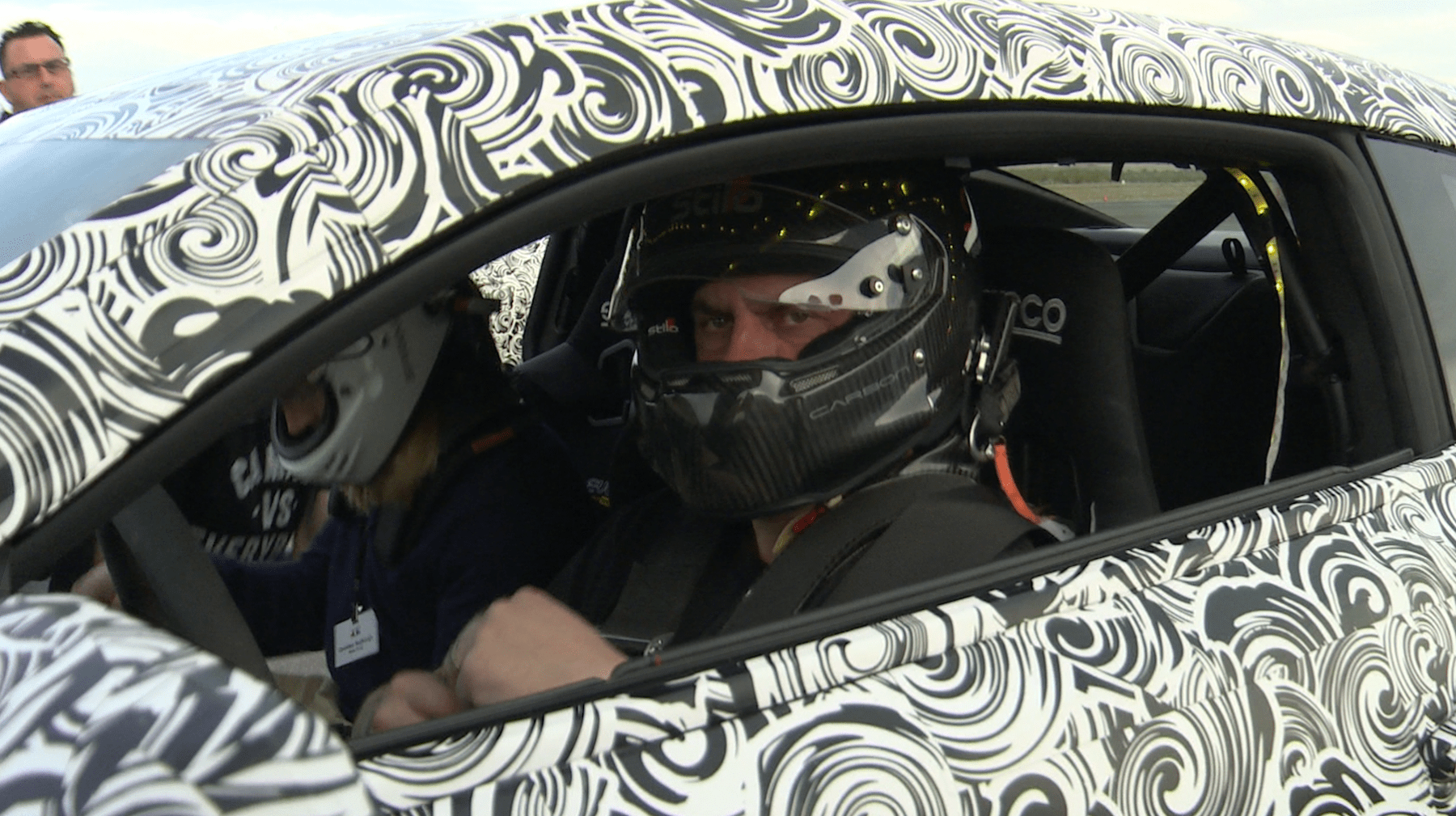 Our driver for this ride-along session was none other than Mr. Mark Reuss, current President of General Motors North America. Yeah, that’s how important this car is to Chevy, and their perception in the North American enthusiast car market. For a pencil-pusher desk-jockey executive type, Mark was pretty damn capable as a driver around that track. I know that things always feel faster from the passenger seat, but this felt genuinely fast. Chevy had us strapped in and flying around the track before we could even think about… well, anything. It took an extra second to get my fat ass belted into the seat, and it was just a smidge too-tight to fit my full behind, but I did it for you. Check out the short video that Chevy made with me in the car. You can hear some of the engine noise, and you can see a bit of the braking and cornering as my giant head flops around the cockpit. It’s neat, so give it a view. [youtube]https://www.youtube.com/watch?v=DBUsz_XfYx8[/youtube] So what is it that makes the ZL1 so fast? Chevy has essentially lifted the supercharged LT4 engine directly from the CTS-V and bolted it in this smaller, lighter, and more nimble platform. It is currently estimated to make 640 horsepower (477 kW), the same as it makes in the CTS-V (10 horsepower down on the Corvette Z06) and 640 lb-ft of torque (868 Nm), which is 10 more than the CTS-V provides, but 10 less than the Z06. Chevy has not released 0-60 times, lateral Gs, or quarter mile times, but it’s safe to say all of those numbers will fall somewhere between the Corvette Z06 and the CTS-V. Perhaps a low 3-second 0-60, a 1/4 mile in the mid-11s, and somewhere around 1.0 lateral Gs on the skidpad (This chassis is similar to that found in the ATS-V, which managed a 1.04 G run). The important thing to note here is that the new ZL1 should be significantly quicker than the 5th Gen Camaro’s version, as it weighs 200 pounds less, and offers approximately 60 more horsepower and 80 more pound-feet of torque. 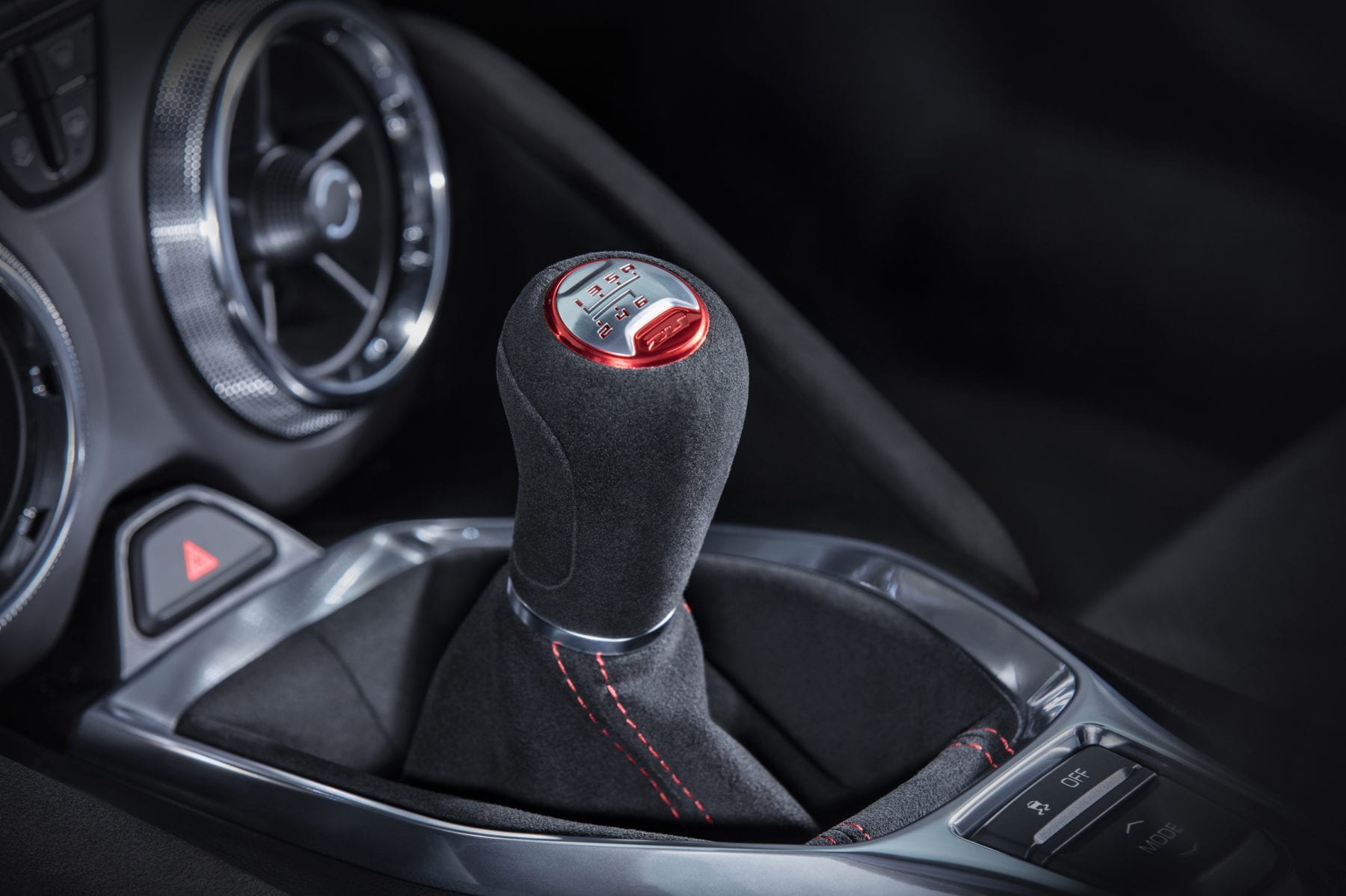 As for transmission, you can choose a standard standard six-speed manual transmission, or Chevy’s all-new, paddle-shift 10-speed automatic. While my preference would be the manual, my ridealong was in a 10-speed car. In their introduction to the transmission, representatives of the company claimed that the new 10-speed would be in eight GM models by 2018. The automatic, from what short time I was in the car, didn’t feel as quick as a dual-clutch, and is a long way off of Porsche’s PDK, but I would guess it was much cheaper to produce, and lighter to boot. With 10 gears in the box, the LT4 can remain in the optimal RPM range with smaller steps between gears. 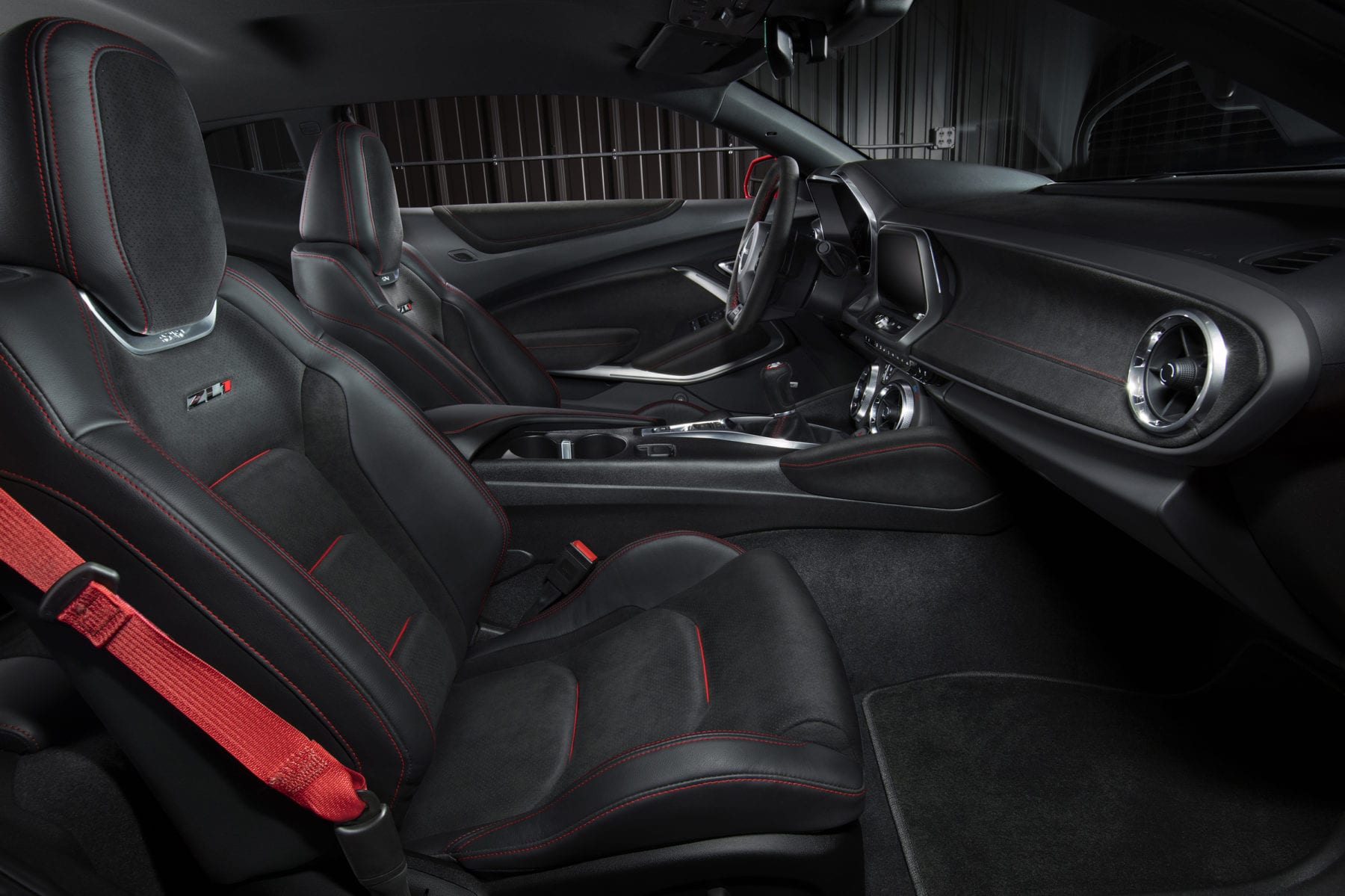 Chevy calls their interior ‘driver-focused’, and cites standard Recaro seats, a suede shift knob, and a flat-bottomed steering wheel. I’ll admit, I didn’t get the chance to sit in one that was production ready, as the pre-production model we were shuttled around in was equipped with purely racing oriented equipment, with a mildly stripped interior, a roll cage, and a pair of racing buckets with serious 5-point balls-crunching harnesses. While I’m sure that was done for the safety of the folks testing the cars, it also served to heighten the sense of speed. I was basically bolted directly to the car without much in the way of padding. I would be curious to see if the car feels similar without such equipment. The new ZL1 also packs a litany of tech-forward features to help advance performance. An updated Magnetic Ride suspension joins GM’s  alphabet soup Performance Traction Management, electronic limited-slip differential, Custom Launch Control and Driver Mode Selector. 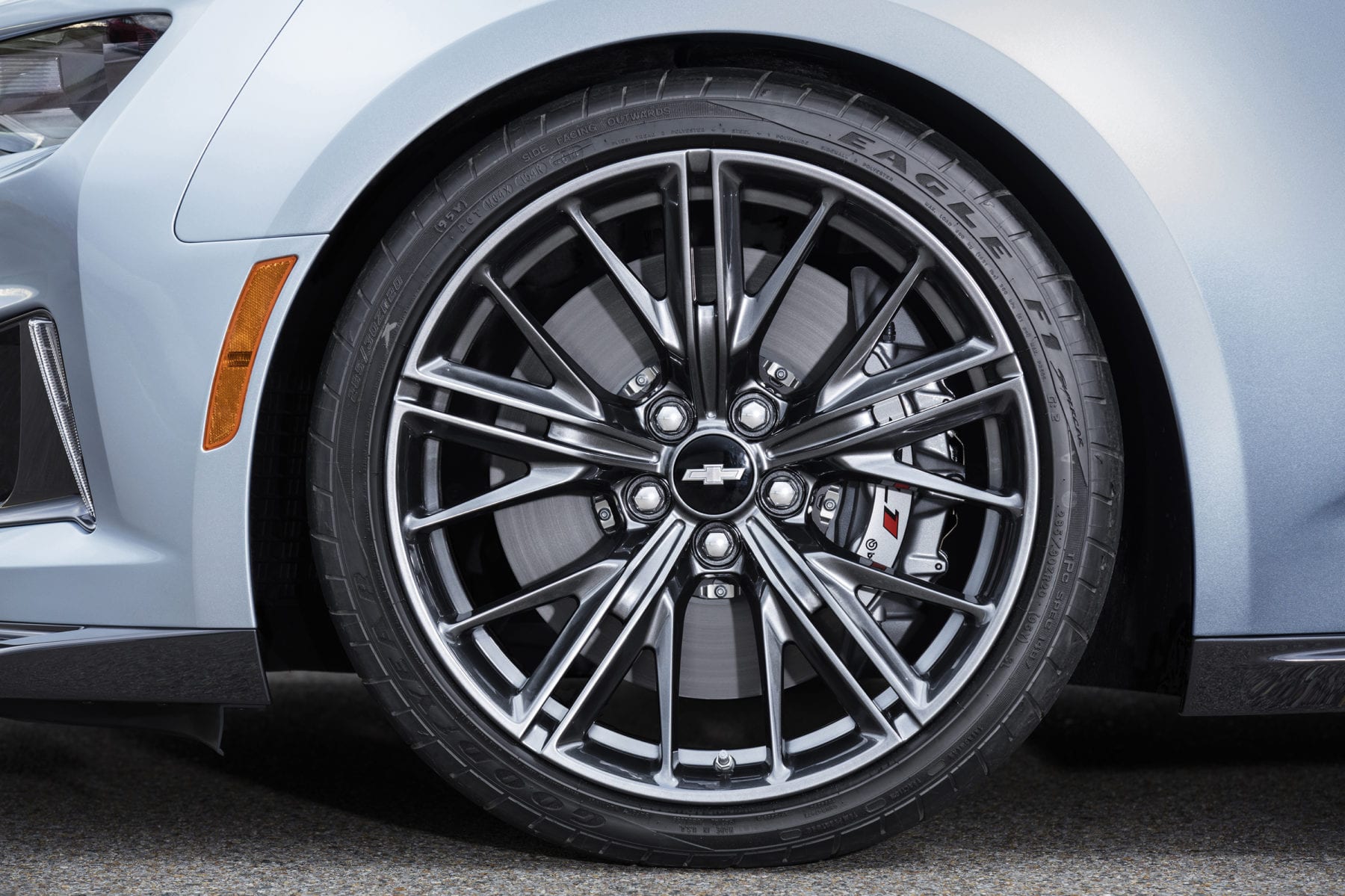 I was impressed with the grip that the Camaro displayed, especially under braking. The brakes are good, but the tires are the limiting factor there. The Eagle F1s seemed to work pretty well, but they were also well up to temperature by the time I got in the car. Granted, they are 285 section width fronts, and 305 section width rears, so they should have decent grip, regardless. My experience with other 6th Gen Camaros bodes well for the handling, as every one of them I’ve been in has been quite neutral through even the tightest of curves. Steering feel might be numbed a bit by the additional weight of the LT4, but it felt reasonably good in the SS that I drove, so I’d expect most of that to translate over relatively unchanged to the ZL1. 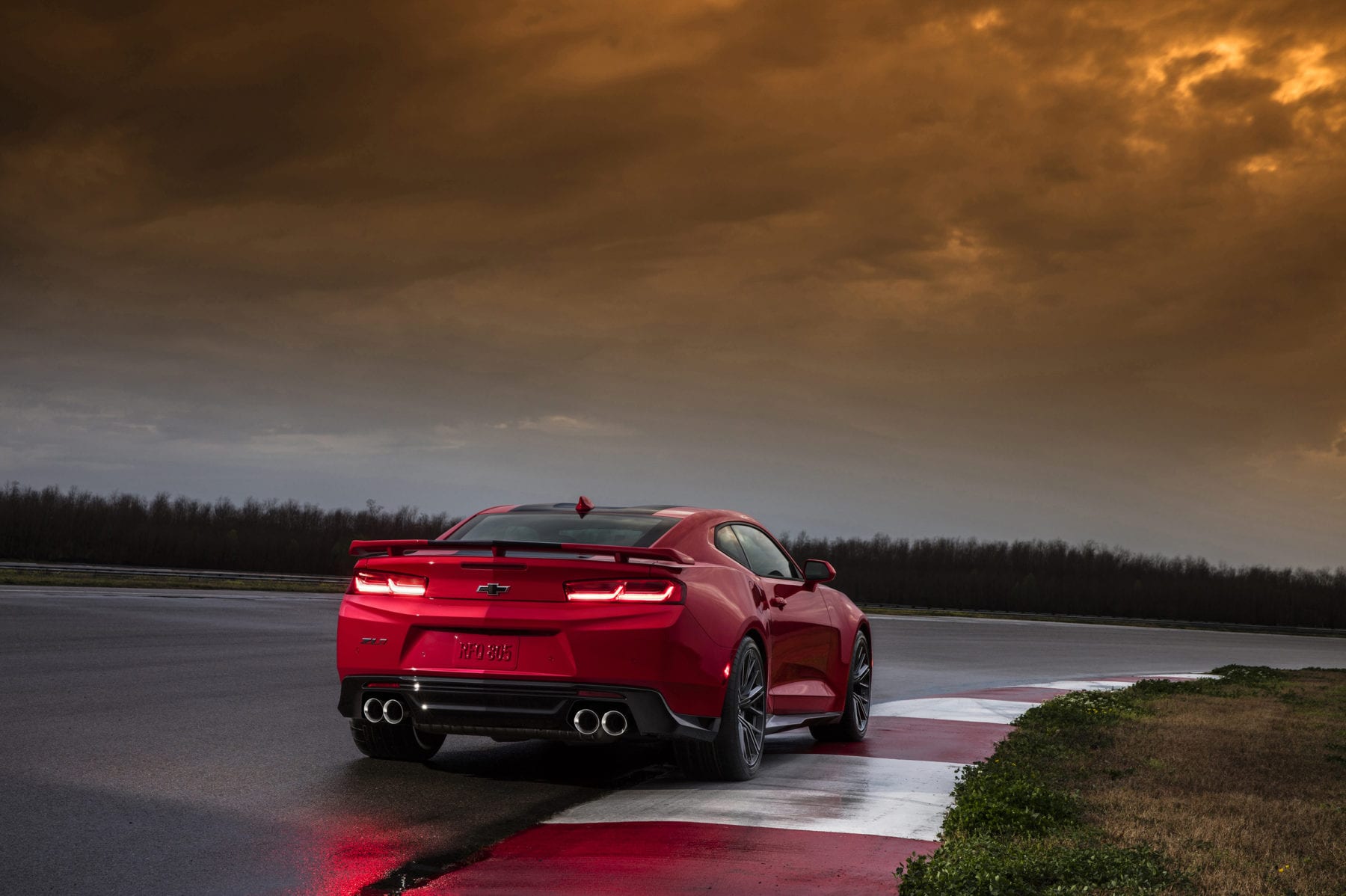 So, what do we think of the styling? The elevated rear decklid wing isn’t too pronounced, and seems to work well with the overall design. There’s a new lower rear fascia with special ZL1-specific exhaust tips. That gaping maw at the front of the car helps air flow through a whopping 11 heat exchangers to help keep temps where they should be (a lesson learned in the Z06, presumably). They say that air-flow has been managed at the front in a way that it both helps cool things down and provides downforce as it exits the body. There’s a new-spec “Flow Tie” as introduced on the Z28 a couple of years ago, which is nothing but a gimmick to my eyes, but I’m all for impractical yet interesting features on cars. 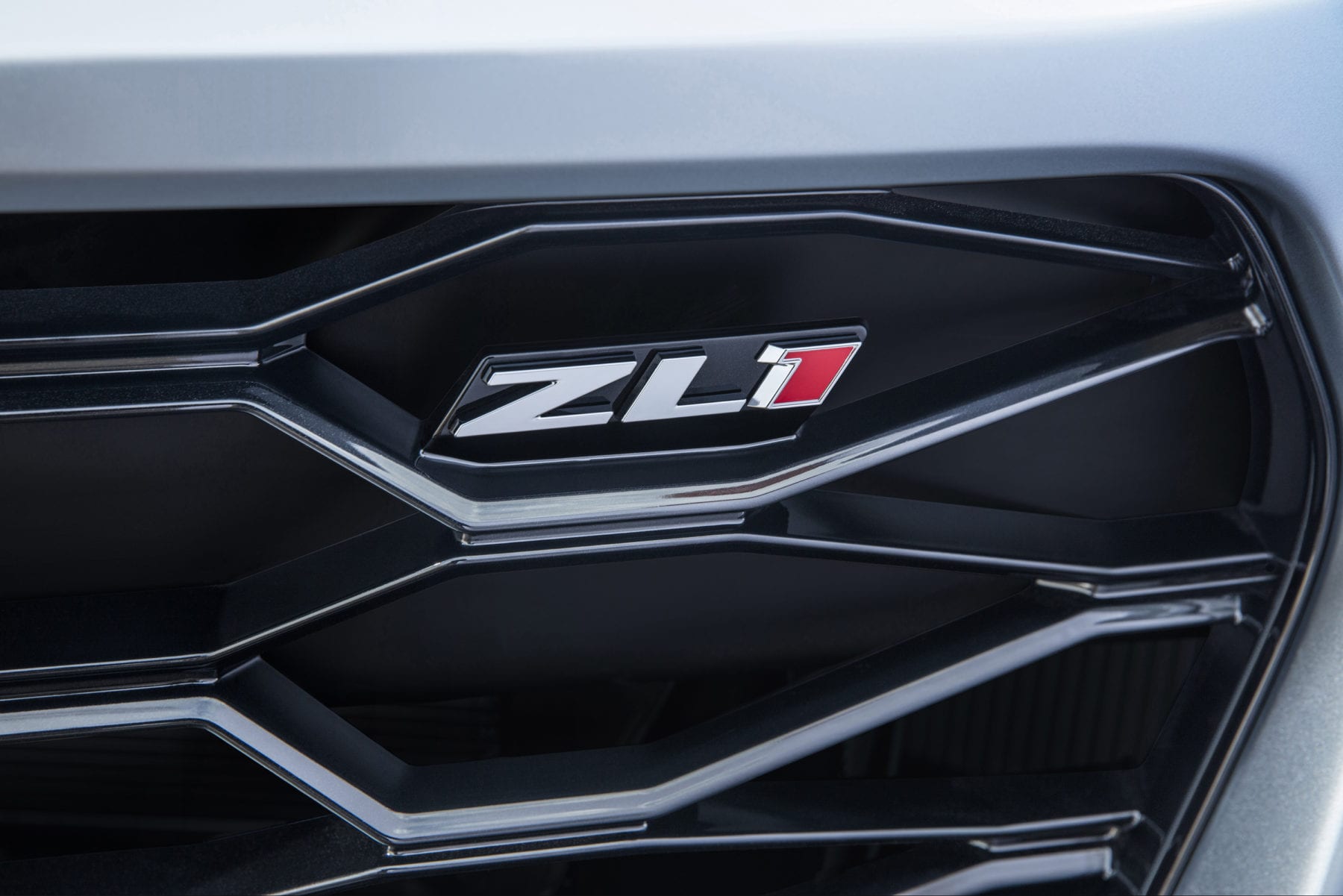 Pricing or release-dates have not been announced yet, but they did say “this year”, which would make me think a 3rd or 4th quarter delivery. What will it cost? Well, I’d venture it’ll be somewhere around 60 grand. The last generation car started at just over 55K, so if they can come close to that price point, they’ll have a performance bargain on their hands. 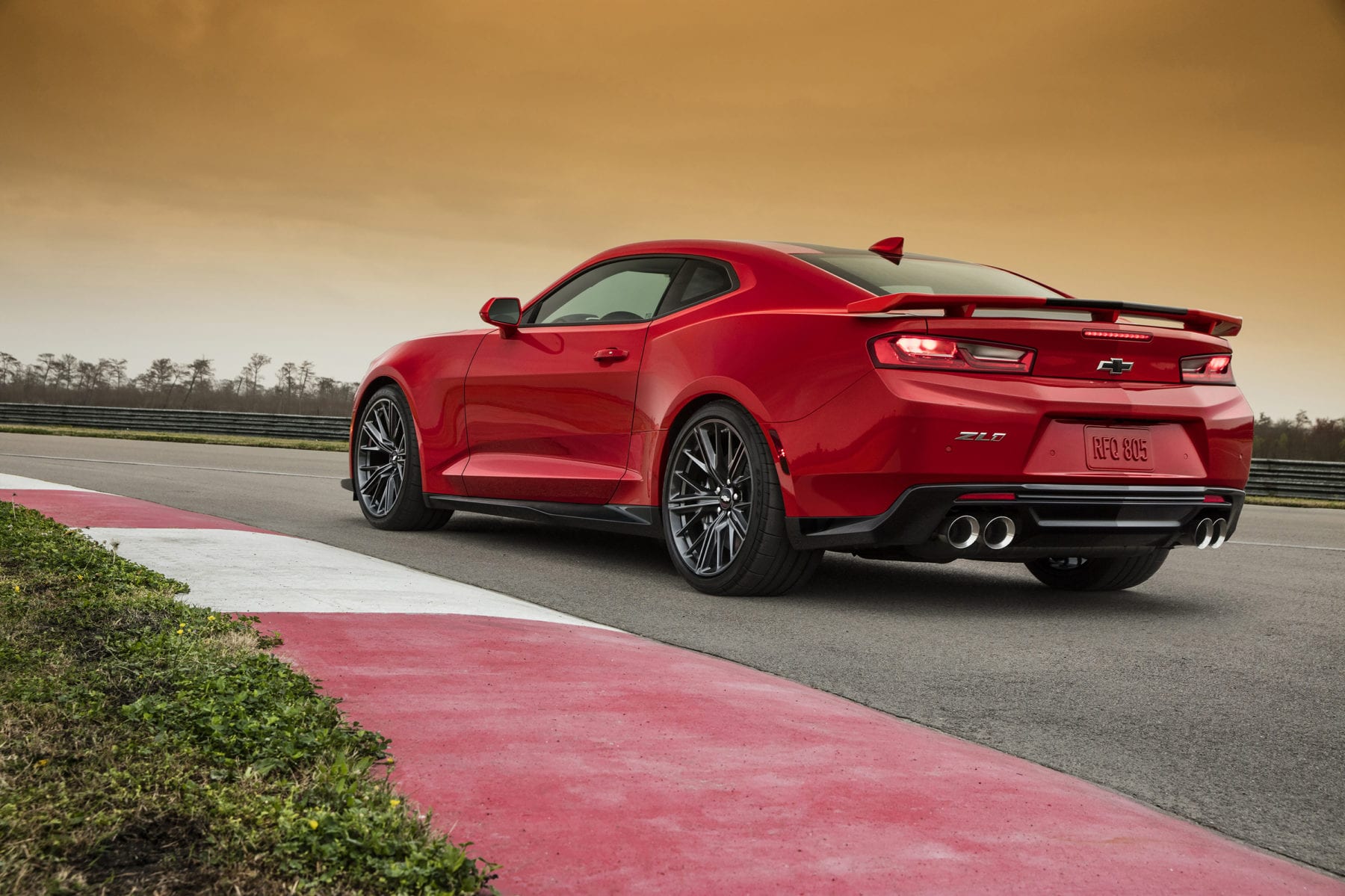 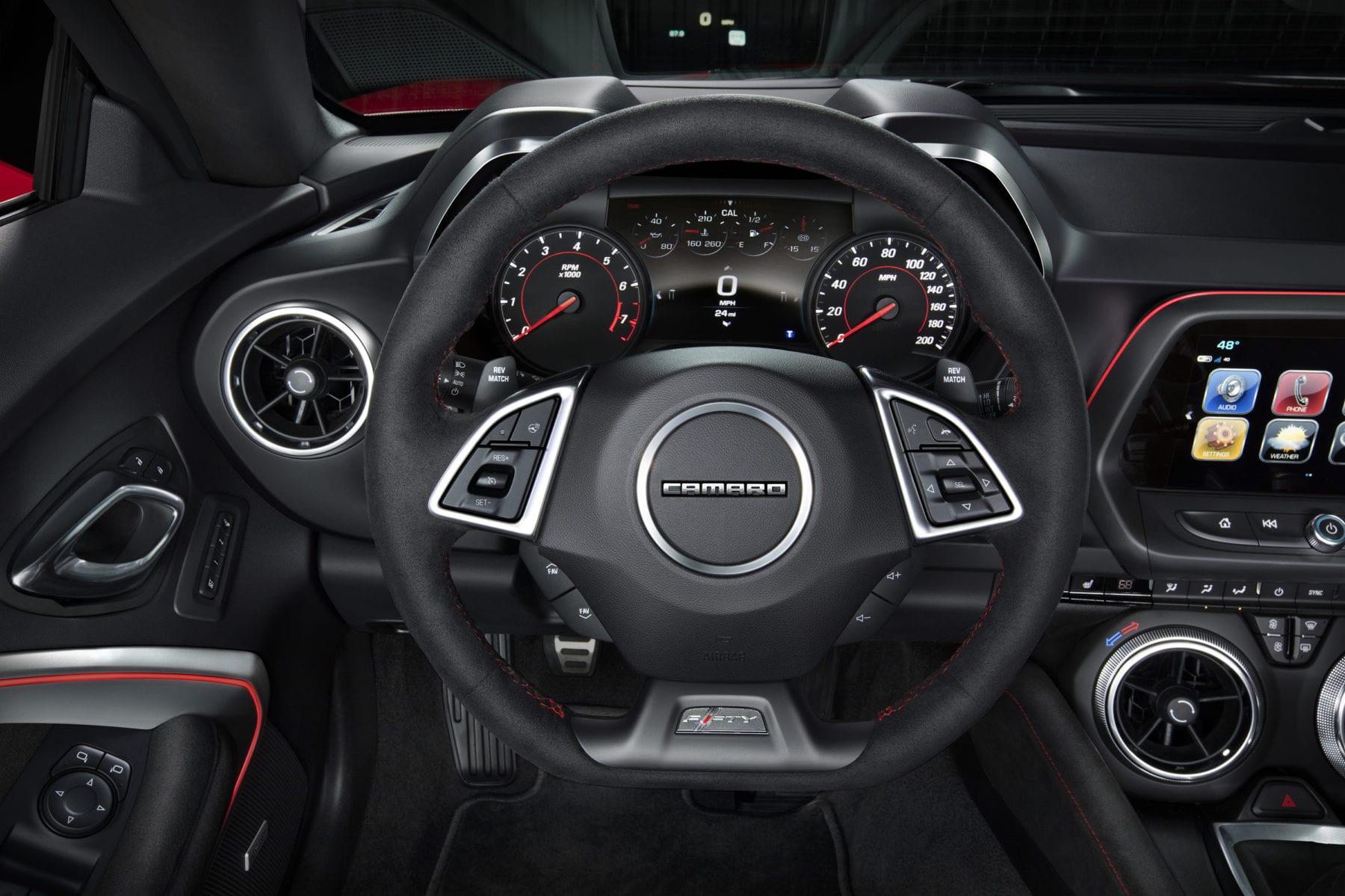