Typically, when it comes to finding a fantasy for Friday, I skew towards the older vehicles. Today is a bit different though, as I’ve got a bit of Aston Martin on the brain. You’ll learn more about why that is next week, but for now I need something to satiate my desires for something from Gaydon. The V12 Vantage has long held a spot in my heart as one of the greatest vehicles on the planet. It’s a small, two-door sporting grand tourer with a wicked 6.0-liter V12 engine under the hood and a six-speed manual gearbox. Power is sent out back, where tires are converted to dust, smoke, and black streaks on the pavement. It’s a glorious hoon mobile that also happens to be rather gorgeous to look at. There’s something special about this particular car I’ve found on eBay. No it’s not the gigantic wing out back, but that does give me a raging clue as to exactly what this car really is… hop the jump to see what I’m talking about. 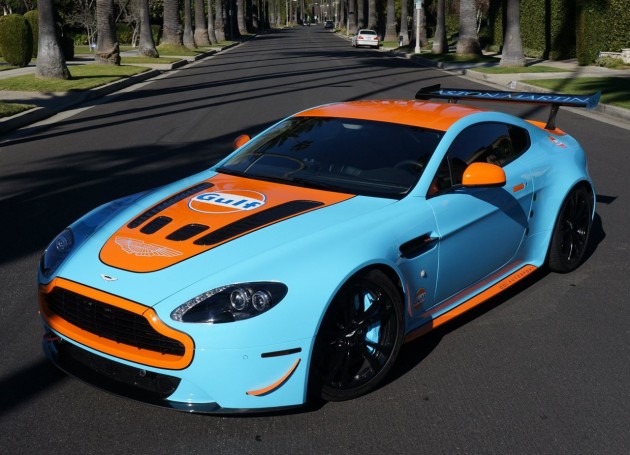 There’s no doubt in my mind that it’s the car seen above. If you Google “V12 Vantage BBI”, you’ll see a handful of image results that show the same car. I’ve personally come across this very car a few blocks from my house, and the sound caused me to stop in my tracks. It’s wickedly tuned up by the folks at BBI, and the noise it produces is simply excellent. The Gulf wrap has been removed since the car has been sold, and is now being relisted for sale. It still has the front canards, the large wing, and the black-painted factory wheels. Additionally, the listing on eBay states that the suspension has been swapped out for an upgraded KW coilover system (with the factory system still available), and that BBI has tuned the engine to produce 60 more horsepower and 30 more pound-feet of torque. [sc:ebay itemid=”131250195348″ linktext=”The car sits with a Buy-It-Now of just under $135,000″]. Seems to be priced extremely well considering the MSRP was around $195,000 when the car was new, and it has just under 12,000 miles on it. Add in the BBI goodies and the suspension, and you’ve got my attention completely. Now that I’ve shared my Fantasy Find for this Friday, it’s your time to show me what you’ve got. It’s Friday, so you’re done focusing on work anyway, so get to shopping… [Source: [sc:ebay itemid=”131250195348″ linktext=”eBay Motors” ]] [Second image courtesy of PerformanceDrive.com.au]