Bring a Trailer has established itself as a platform to buy and sell some truly special vehicles, such as Miuras, 300SLs, and other eye-catching classics. They list some incredibly cool cars. And also old Porsches. One of the most unique automobiles ever listed on the site, however, is not a car. It’s a bus. And it is the 1970’s.

According to the listing, McLaren Engines’ chairman custom ordered the 1972 Ford Condor II and originally used it in racing as a hospitality vehicle. A CB radio, onboard generator, and emerald green carpeting throughout are just some of the many period-correct features. The automatic transmission is a three-speed “Cruise-O-Matic,” a wonderfully retro name.

The color is officially dubbed ‘Papaya Orange,’ but can easily be mistaken for mustard yellow upon first glance. The driver’s seat is fashioned of brown cloth and trimmed in what appears to be brown vinyl, while the rest of the interior is finished in lovely 70’s walnut and more emerald green carpeting. Details such as the off-white stovetop and the pastel green toaster add further to the charm. 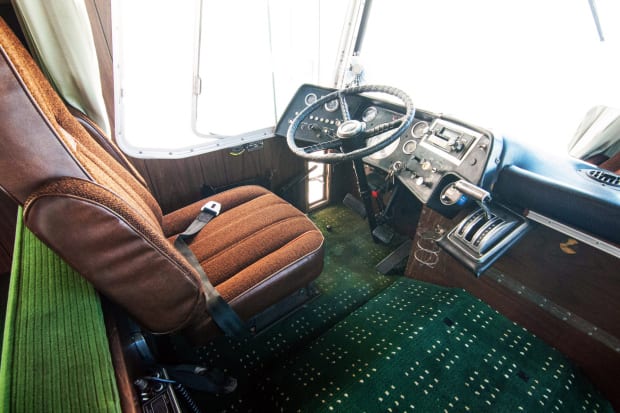 And then there’s the styling. The windshield tilts forward, which presumably violates every known aerodynamic principle of vehicle design. The parallelogram-shaped side windows tilted in the same direction helps keep the design cohesive. Finally, there are the white side stripes and white wheels, which bring together the unmistakably 1970’s look.

The bus does appear to need a little love, with corrosion evident in some places on the body, and some cosmetic paint issues here and there. The vertical striping on the bathroom walls exhibits some patina. However, the upholstery looks in great shape, and the coach is reportedly drivable.

Located in San Pedro, CA in the Los Angeles area, the coach sold with no reserve price. It includes a clean California title, a significant selling point for those who in the Golden State. It sold for $32,500 on June 30, 2020.  There are few vehicles this interesting on the market for that money, and it’s doubtful another will ever come up for sale again.