In 2018, a some 240,032 Wranglers found new homes, up an impressive 26% compared to 2017, the last year of sales for the outgoing JK. But what’s important to note is that with the arrival of this JL, a surprising powertrain tagged along; a turbocharged four-cylinder with FCA’s eTorque mild hybrid system. Yes, you can now combine the words “Hybrid” and “Wrangler” in one sentence.

While Hooniverse has already been behind the wheel of the six-cylinder JL, I wanted to test  if this new efficient four-cylinder setup was any good. Jeep handed me the keys to a new 2019 Wrangler Unlimited Sahara for a week and a full tank of gas. The Wrangler has always been a vehicle synonymous with adventure, and now the it can take to the outdoors with a smaller carbon footprint, a peak my tree-hugging self appreciates tremendously. But is it actually green? Let’s find out.

It will cost you… 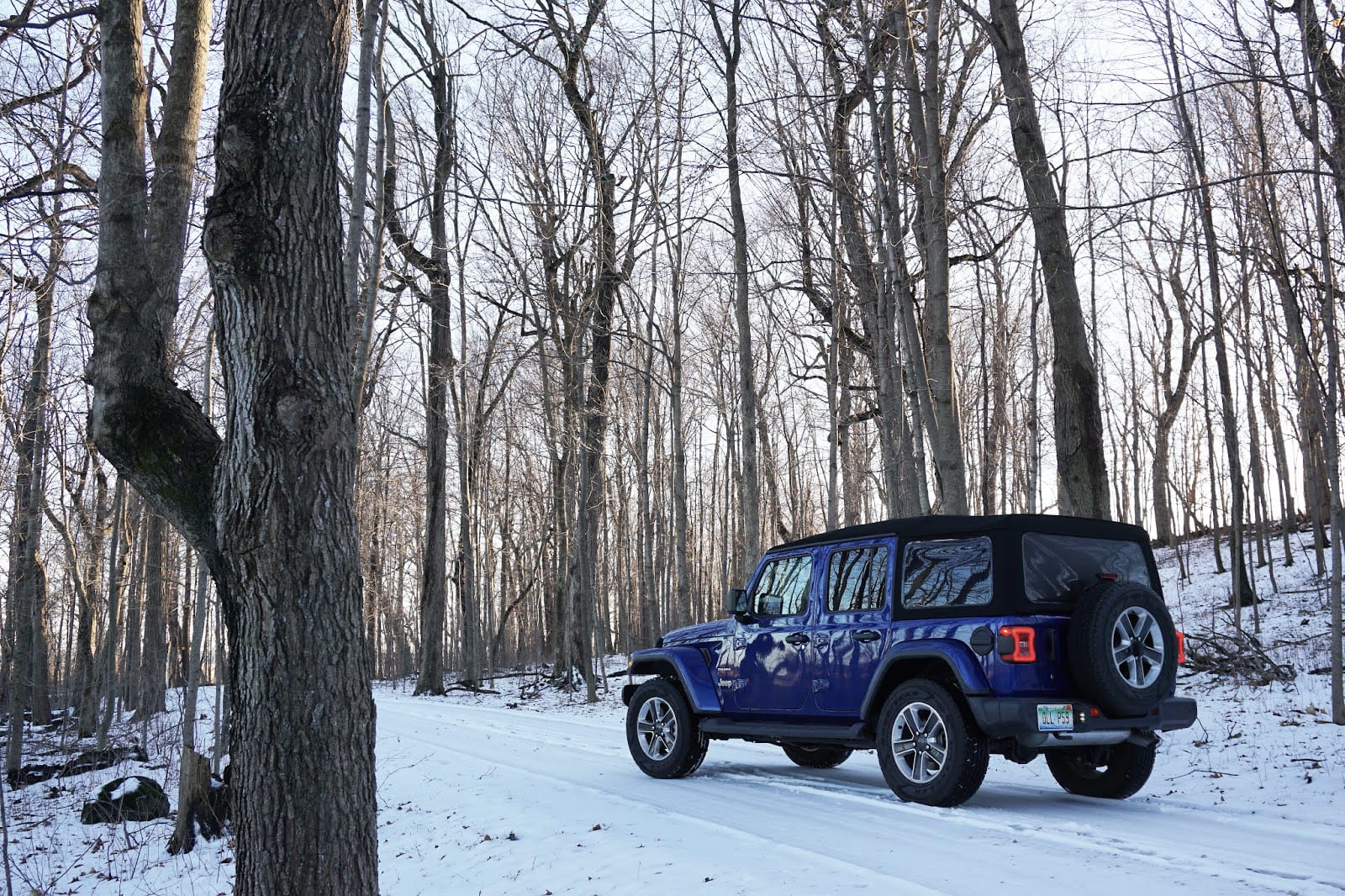 Ride comfort has improved greatly and showcased in JL which could be daily driven even in a strictly urban setting since its pavement manners are noticeably better than the outgoing JK. At times however on the highway, I found the Wrangler somewhat difficult to keep in between its lane lines, especially against high winds. Sure, I wish the steering were little tighter at higher freeway speeds but the four-door Wrangler I had was so easy and nimble to maneuver in parking lots, parallel park, and box its way down cramped city streets.

Where this Jeep shines is off the beaten path, of course. My Wrangler Unlimited Sahara had the optional Selec-Trac full-time four-wheel-drive system with a manually-selectable transfer case ($595) and a limited-slip rear differential which also brings a Dana 44 heavy-duty rear axle ($595 total). This new full-time four-wheel-drive system, when engaged, automatically switches between four-wheel-drive and two-wheel-drive when more traction is needed, sort of like an all-wheel-drive system. The amount of off-road driving I did throughout my test didn’t require the use of the 2.72:1 low 4×4 range (4L), but shifting the transfer case into 4H AUTO kept me navigating down an icy, snow covered track that wandered deeper into a Wisconsin state wildlife area. 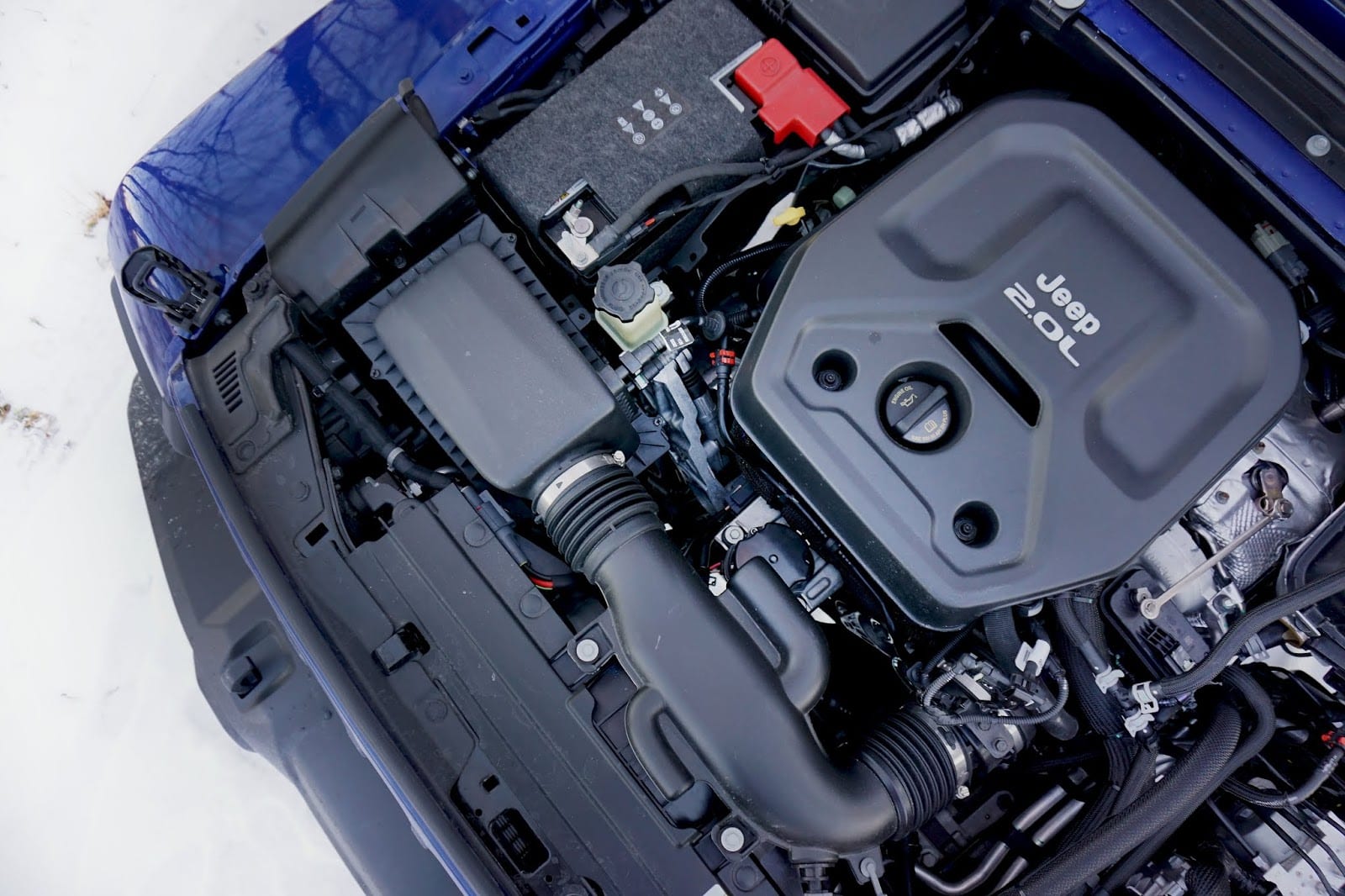 The star of this review is FCA’s new eTorque system, also found on the Ram 1500, which uses a belt-connected motor linked to the crankshaft and a modified alternator to provide bursts of up to 71 lb.-ft. of torque, literally on demand. I find myself in debates with friends about buying a four-cylinder Wrangler, and I’m often met with stark criticism and then doubts of it being underpowered and weak. That may have been the case prior to the JL landing, but this new 270 horsepower turbocharged 2.0-liter four-cylinder mild-hybrid setup actually makes much more torque than its bigger3.6-liter Pentastar V-6 power plant does.

Even with 15 horsepower less than the six, this is not a slow Jeep at all, folks. Its impressive 295 lb.-ft. of readily available torque has very little lag. Floor it from a green light or when desperately attempting to quickly merge on to a stereotypical, dangerously short midwest on-ramp and you’ll faintly hear the turbos spool up as all of that punchy torque arrives. The engine teams with an 8-speed automatic meaning acceleration both off the line and in passing is consistently easier and smoother. So it’s fun, absolutely, but is it green? The higher MPGs one would expect from this turbocharged four-cylinder with eTorque pairing, do come at that higher cost however.

Dropping two cylinders does command an additional $3,000 to the price of the Wrangler.
($2,000 for the required eight-speed automatic plus $1,000 for the turbocharged four-cylinder)

When the EPA evaluated the Wrangler with this mild-hybrid setup under the hood, results came in at an estimated 24/23/25 mpg combined/city/highway for the two-door, and 22/22/24 for the four-door Unlimited. All of those ratings were accomplished with premium fuel, which is not required however.

Even though my test Wrangler Unlimited Sahara had auto start/stop to help curb emissions, in my 450 miles of testing I averaged 19.5 mpg combined on a full-tank of premium gas. The conditions were not-so-favorable for the big blue Jeep: frigid temperatures, snow and icy surfaces, and daily stop-and-go jaunts through Milwaukee’s horrendous rush hour traffic. The majority of my driving was in two-wheel-drive, with a mix of probably 60% highway and 40% city.

It was discouraging to think that the extra $3,000 for dropping two cylinders in the name of fuel economy, actually netted mpg results closer to what you’d expect from the standard and less-expensive, six-cylinder Wrangler Unlimited. But everything is situational of course, and I’m sure those mpg figures would be higher and worthy if Wisconsin weren’t stuck in the middle of a long winter. Three-grand is an expensive gamble to take to hopefully squeeze a few more miles out of a tank. Curious, I took took a look on Fuelly which showed other JL Wrangler owners with the same turbocharged four-cylinder, eTorque mild-hybrid setup seeing similar mpg returns.

While the ROI may shutter some potential buyers away from picking this new mild-hybrid powertrain; it shouldn’t be overlooked at all, because your mileage will obviously vary and could definitely be better than what I calculated. Plus, that enjoyable rush of torque means the turbocharged four-cylinder Wrangler is an absolute hoot to drive.

[Disclaimer: Jeep tossed us the keys to the Wrangler Unlimited Sahara and included a tank of gas.]