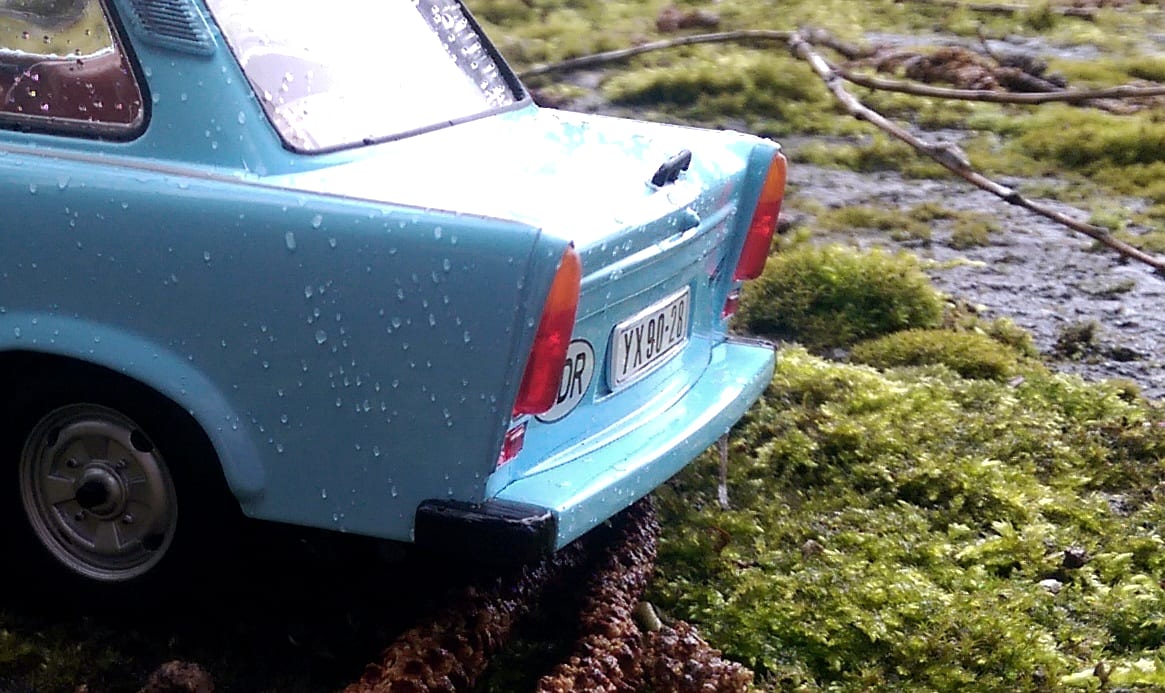 For years and years I had wanted a model of a Trabant to add to my collection of “real world” cars. I had vague recollections of seeing them for sale in model emporiums at prices just beyond what I could afford in my formative years as a collector, but I never made that stretch. And then they all disappeared. Recently they have started appearing on eBay again, so I finally took the plunge, and here it is. Unfortunately I wasn’t to know that my time with this particular diecast would be a complete disaster from beginning to end. The thing had been advertised as being “intact” but with packaging that had seen better days. “You pays yer money, you takes yer choice” I reckoned, and handed over some of my PayPal electrocoins. Reasonably promptly a slightly mishapen brown paper-wrapped box arrived…. making a slightly ominous rattling sound. 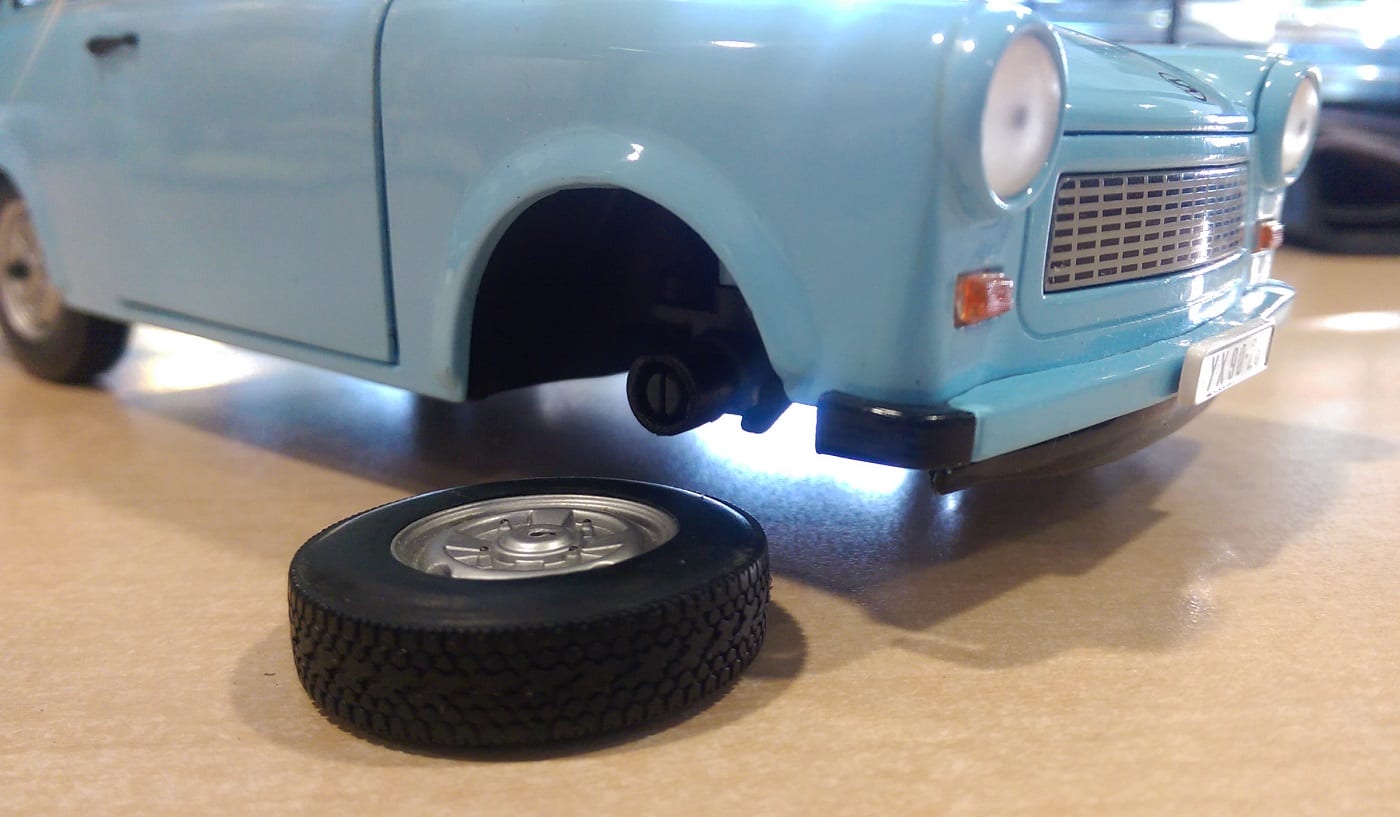 The seller had elected not to pack the model in a cardboard box, instead he had chosen to simply wrap the original packaging in brown paper. Now, said packaging, of which it had already been revealed “had seen better days” had zero structural integrity. Nor was the Trabant inside actually anchored to the base-plate. And sure enough, through the yellowing, blurry acetate window I could clearly see that one of the wheels had made a bid for freedom. I should have reported it to the seller immediately. But no. Reckoning that a bit of superglue would see me right, I hung onto it, though I confess that it lived in the boot of the Rover for the next fortnight, in a kind of limbo while I remembered to get my hands on some superglue. I never got around to it, so I took the opportunity on my next Saturday at work to use some of the glue from the workshop. 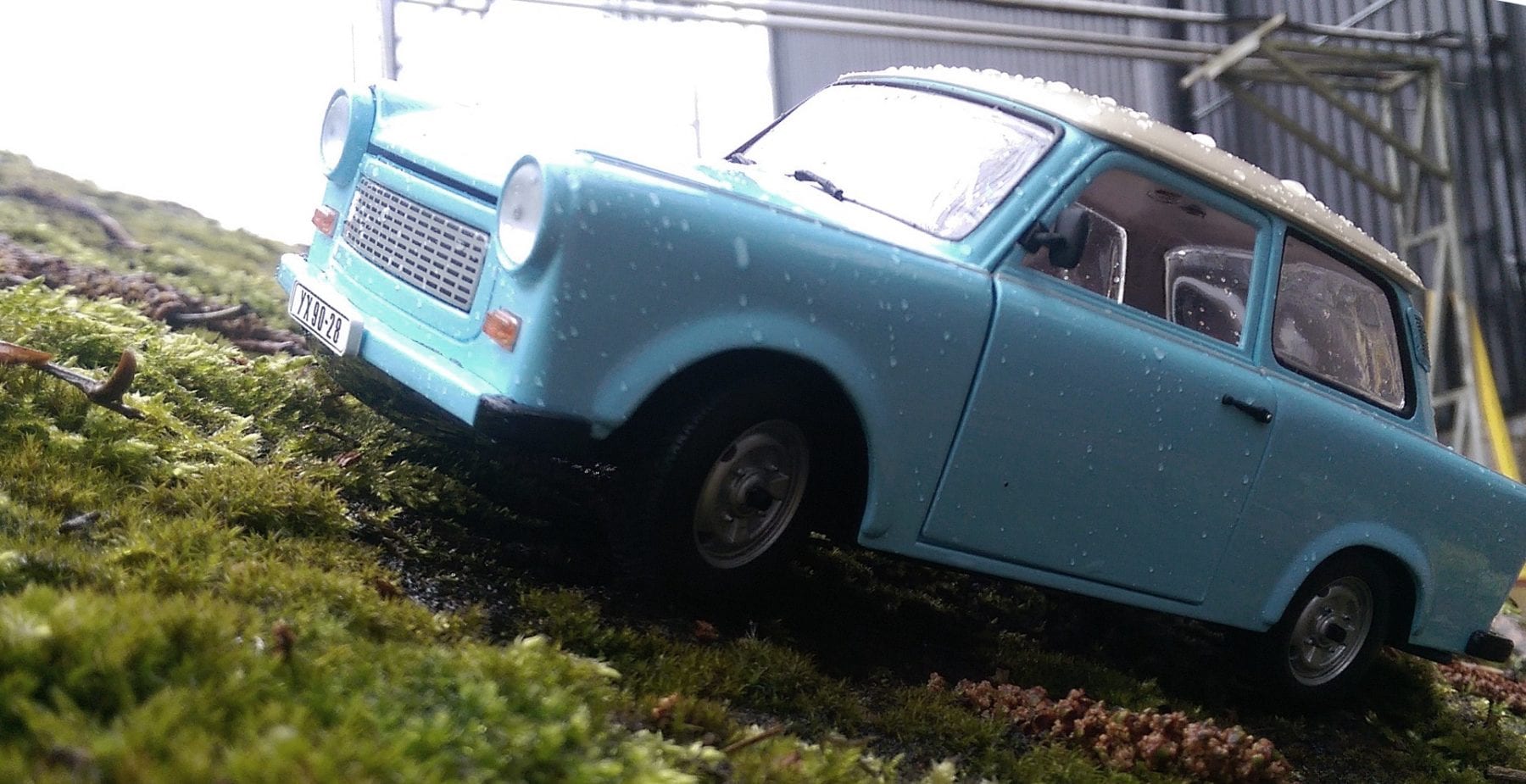 The wheel was mounted to the stub-axle by interference fit. There was a collar around the axle which was previously part of the wheel assembly, all I needed to do was reunite them. A few dabs of the workshop grade- stick anything to anything ultra-mental rock hard glue of death should do the trick. So I took a bottle and twisted the cap. It’s liquid, this stuff, so you don’t squeeze the tube, you just let it gravity-feed at the nozzle. I saw a bubble of glue emerge at the tip, gingerly contacted it against the wheel hub collar, and spllooooosssh. Fuck. Liquid glue everywhere and, oh great, now the wheel was stuck to the desk, and what has happened to my fingerprints on my right hand? Off to the bathroom and loads of water, then back to the desk for damage assessment. Fuck the second. The steering was now all glued together and jammed in situ. When I got home I disassembled the whole thing and tried to loosen everything up, and I was doing well until I cut one of the mounting tabs off the right hand front hub, which now quite rightly refuses to stay connected to the chassis. So even with the wheel now glued in place (yes, I found my superglue, the gel-type stuff which doesn’t gush out uncontrollably) it sits at a stupid angle making it look like the suspension is broken. Which it is. Well, it is a Trabant. 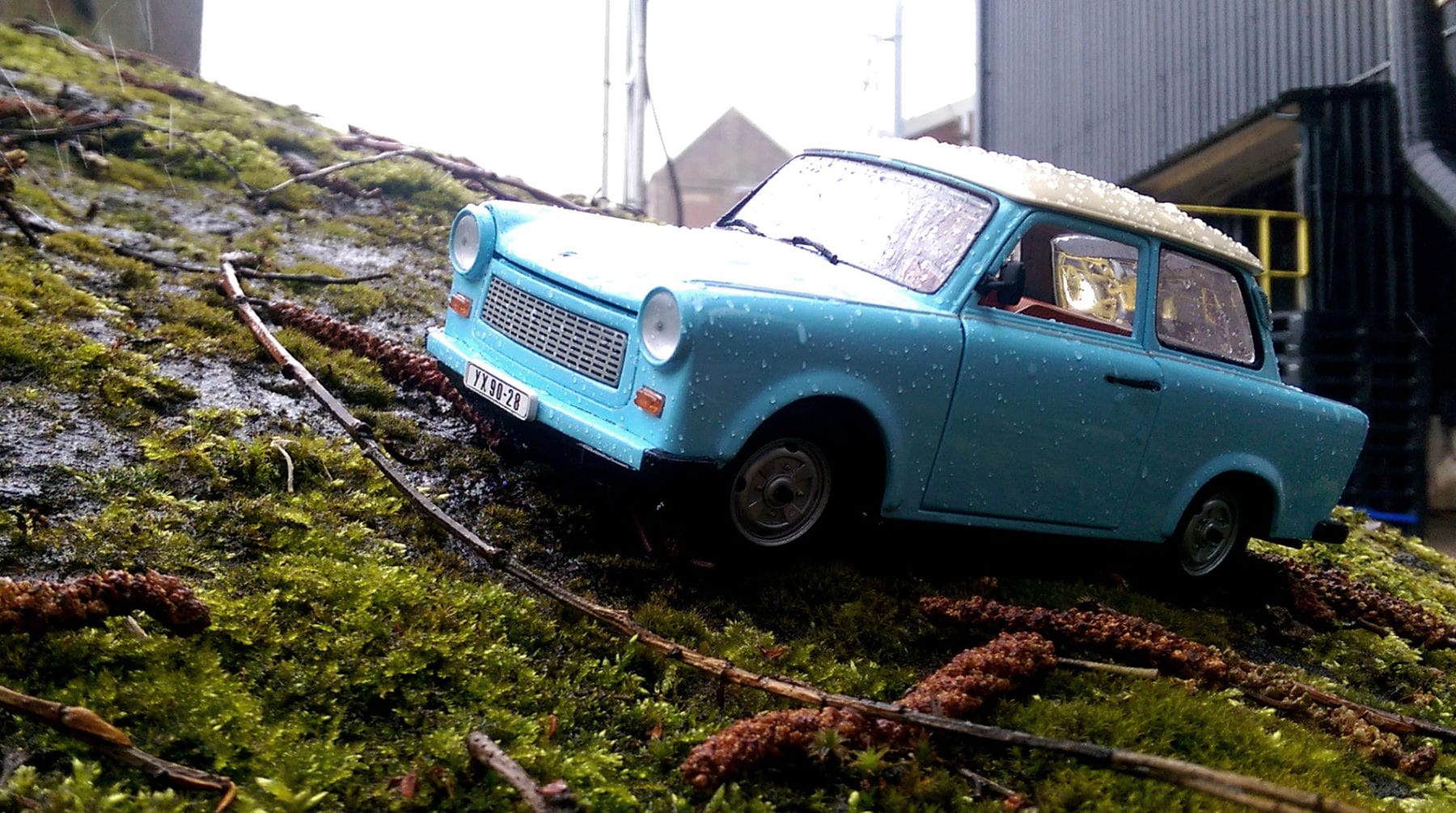 The model itself is actually quite charming, in its baby-blue with beige roof, one of the popular Trabant liveries, with opening doors and bonnet but a sealed trunk. The proportions are as hideous and ungainly as the 1:1, but accurate and the stance would be about right if I hadn’t ruined it, and the actual body casting is reasonably good. The decals are neatly applied, the rear lamps and the front indicator lamps are pretty nice, even if the headlamps are a bit misty and cateracty. The wheels are nice. The massive let-down is the front grille, which is a horrible printed affair, not even simulated mesh, and has an unconvincingly non-contoured surround. It ruins the model, in my opinion. 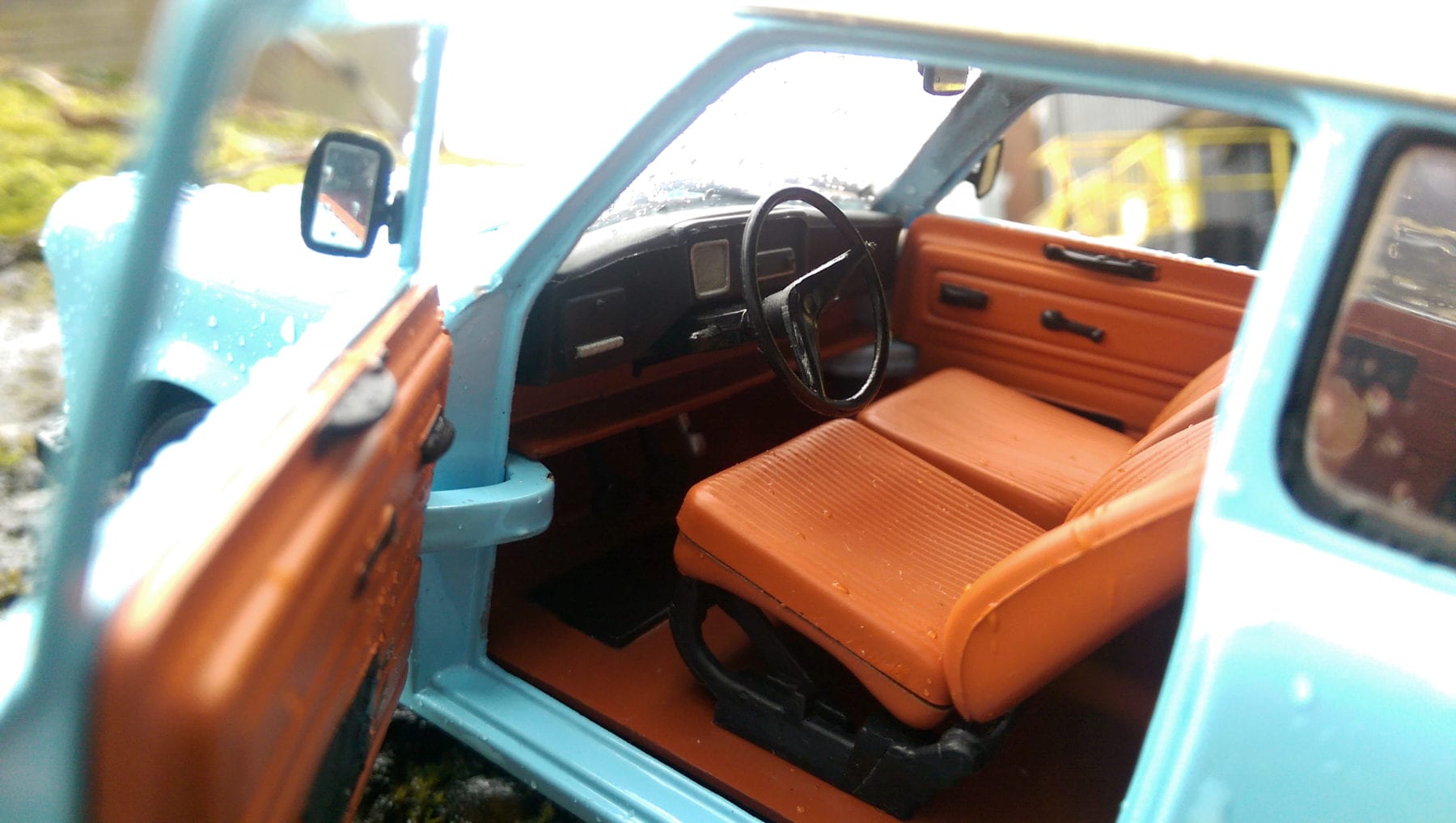 The interior is probably the best bit. With tan-coloured upholstery against that baby-blue duraplast background, the feeling of Iron Curtain stifled misery is palpable. The dashboard is, accurately, as simple as they come, though I’m not sure why the speedometer has a square bezel, every Trabbie 601 I’ve Googled has boasted a round dial. The appalling 26hp two-stroke 600cc engine is present and roughly the same shape as the 1:1, but there’s none of the fine detail to “make it pop” that you might find on a Maisto, so the fact that it was pissing down with rain when I took these photos isn’t the only reason I didn’t take any under-hood images. 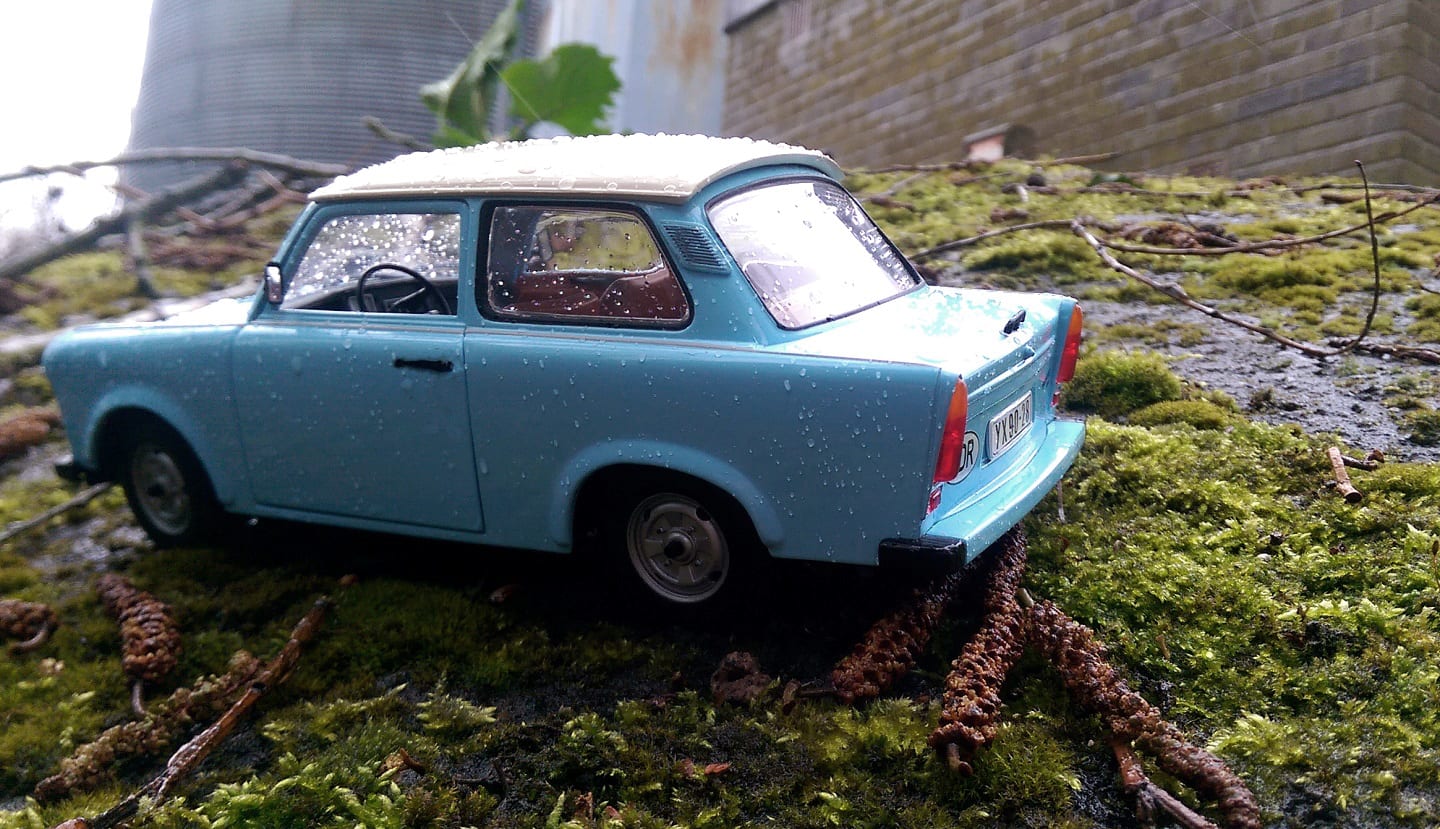 During that photo-shoot, incidentally, the front bumper had to be re-fitted twice, and if you look closely you’ll see that I had to photo-shop the door handles back to their correct position, they having twisted out of place while being handled. I think it says quite a lot about the Trabant 601 and its global status that this model, by Vitesse, is the only diecast 1:18 scale offering I’m aware of. It would be hilarious if AutoArt were to do one. (All images copyright Chris Haining, Hooniverse 2016)