Book Review: The Road Chose Me, Volume 1: Two years and 40,000 miles from Alaska to Argentina

Those who have been reading this here website will probably recall us writing about Dan Grec. We talked about Dan’s African journey and even nominated the Jeep he drove in Africa for the Hooniverse Car of Year – the most prestigious automotive award in the world. But before Africa there was another expedition. Before the camper JK Jeep there was a soft-top TJ Jeep.

A decade or so ago, young Dan Grec gave up his engineering job and sold almost everything he owned. With careful planing he decided to go on an expedition of a lifetime – a drive from as far north as Prudhoe Bay, Alaska to the southernmost city in the world, Ushuaia, Argentina. This book describes not only the road trip but what lead to it and what happened along the way. It speaks to the beauty of Latin America, its people, their cultures, beauty of the area, food, corruption, infrastructure, and bureaucracy.

Importantly, the book addresses many things that are not otherwise available in typical travel guides. Dan discusses loneliness on the road, our material culture, happiness, finances, and other such life things. Those discussions drive some very good points, even if many will not or cannot agree with them.

Like any good car review, a book review cannot only consist of praises. I did disagree with Dan on a few things, such a preparation. At the start of the journey his $6000 Jeep was far from new. Some preventive maintenance would have helped avoid a busted radiator. Dan would disagree and say that the process of fixing the radiator in Alaska was part of the adventure and it allowed him to meet new people. I’d rather have a piece of mind. 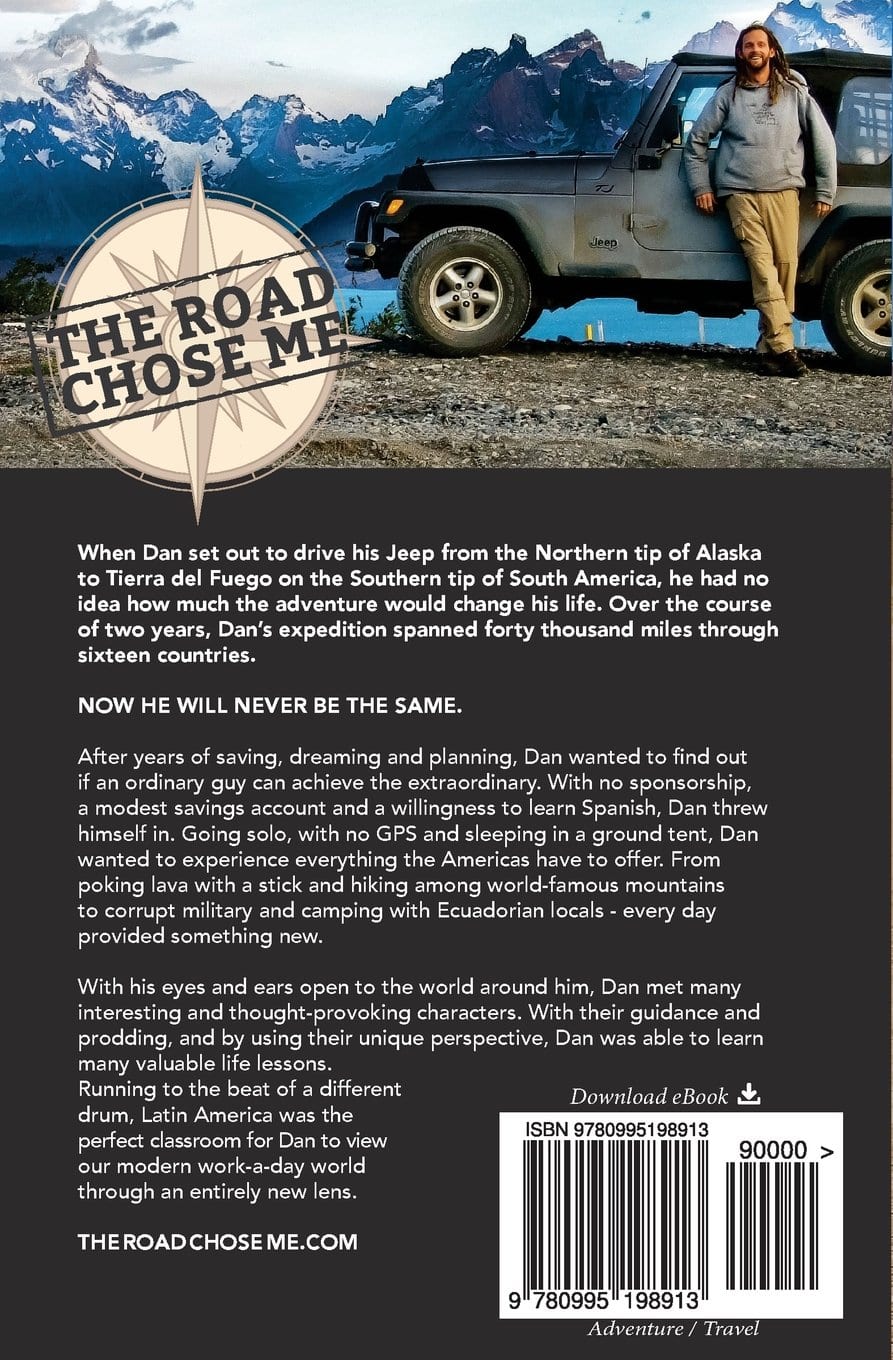 In recent times “overlanding” has become a household term. People build-up their rigs with suspension lifts, big tires, heavy steel bumpers, winches, safari roof racks, snorkels, lights, refrigerators, and a bunch of other stuff they think they will need when they’re on the road. Their cars seem to be the most essential part of the trip. And that is just wrong. The best places Dan has seen, he got to on foot, leaving the Jeep safely behind in civilization.

I’m going to spoil the book here at little because I feel like I need to, because it is important. The shockingly ironic part of Dan’s American journey was that his Jeep was completely stock. No lift-kit, no big tires, no special bumpers, skid-plates, no roof top tent, or light bars. Not only that, it was the least expensive model of TJ-generation Jeep that existed: four-cylinder, manual transmission, no A/C, and no hard-top. And it took him to all the same places where others think they need to use trucks worth hundreds of thousands of dollars. I personally smirked at that part, having owned a TJ in the exact same specification.

The Jeep was certainly a big part of Dan’s journey but it wasn’t the most important part. The Jeep was one of the characters in the book; a companion on the road, a tool of the travel. While Jeeps have their personalities, I’ve seen this route taken in trucks, Cadillacs, on motorcycles, and various other vehicles.

The book describes an adventure that so many of us want to take and provides the motivation to explore and to enjoy life. It looks at Latin America’s dark side but also the happiness of its people. Those of us who seek adventures and understanding of places unknown you will love this book.

Non-affiliated Amazon link here. I bought the book directly from Dan at the 2019 Overland Expo East. He even signed it for me. Check out Dan’s website here.