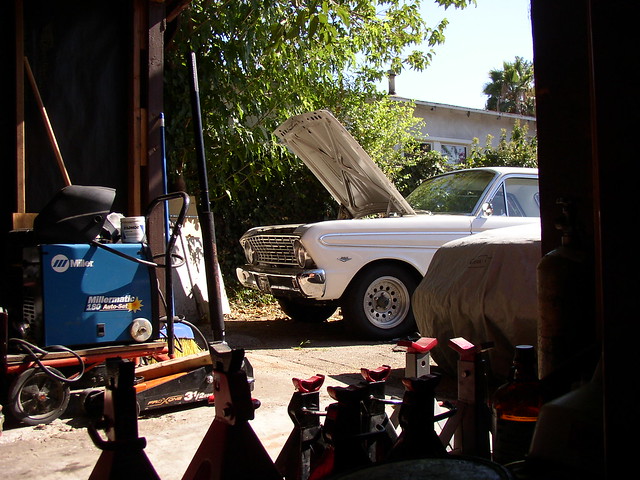 Roughly a year and a half ago, I picked up my 1964 Ford Falcon with the intention of using it as a daily driver. It sports a 260c.i. V8 (a baby 289, if you will), a four speed manual transmission, and power nothing. I figured it might be worth an update to see how commuting over 80 miles a day in a 46 year old car worked out for me.

The intent was not to have another project car, but it did need some love right away: new shocks, a new clutch, rebuilt shifter and a new shifter boot to keep the fumes out. I added a tach and upgraded the brakes to 4-piston Kelsey-Hayes vented discs driven by a dual-bore master cylinder (still manual, though). While all straightforward tasks, the arrival of Mad_Science Junior delayed their completion until some time in April. 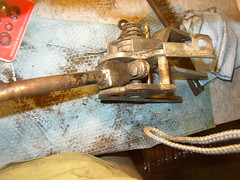 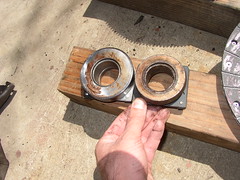 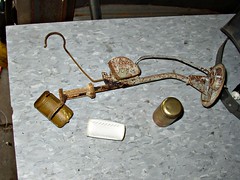 With that to-do list completed, I was on the highway in regular use. The rear axle has super high 2.80:1 gearing, so 75ish (the speedo’s a bit off) comes just under 3000rpm and yields roughly 20mpg. Thanks to the low compression (8.6:1) of the 260, I’m doing that on cheap 87 octane.
How’s it drive? Quite pleasantly. While not actually fast (the 260 was rated for about 165hp, gross), it feels sporty and sounds great. Slamming through all four gears in the T10 on my way up an onramp is very rewarding. Once up to speed, the ride is nicely controlled, neither stiff nor wallowing. The steering box needs some love (more on that later), as it tends to wander about a little due to a 90 degree dead spot in the middle.
While long, my commute is entirely against traffic, meaning there’s no shortage of fast moving air. As such, the lack of air conditioning is hardly an issue. Even up into the low 90s, it’s tolerable with the windows down and the vent windows cracked.
Unfortunately, things can get unbearable quickly if I make any detours off the freeway. The simple task of rolling by the ATM on the way to make an all-cash craigslist purchase left me a cranky, sweaty mess after lousy directions had me wandering all over Sylmar, CA looking for an address that didn’t exist. While I don’t condone using a cell phone while driving in the first place, I can point out it’s a mechanical impossibility while rowing four gears and navigating without power steering with the windows down. Getting revised directions required me to pull into a lot and park.
It’s also still clear that the intervening 47 years of chassis design accomplished a great deal. Sharp bumps like potholes jar the chassis, resonating through the whole of the primitive unibody. The steering leaves much to be desired. The recirculating ball steering box has tons of slop, and the tires love to track with the grooves in the pavement. I’ve learned the art of sawing the oversize steering wheel back and forth juuuust enough to keep it pointed straight, but not veer side to side. Introducing guest drivers to the system has been stressful.
Speaking of stress and steering, having a front tire bite the dust on the freeway is a tricky affair with manual steering. It turns out I should’ve added “new tires” to that first to-do list, as not long after entering regular service the aged, cracked sidewall of the right front gave out on me on the way to work. As I rapidly made my way to the shoulder (aided by the newfound drag from said front right), I realized hazard blinkers weren’t available in 1964.
Once settled on the shoulder, I set to work with the click-clack bumper jack. Remember those front disc brakes I swapped on? One reason I picked them was because they fit under the 14″ wheels I have. Unfortunately, the factory wheels (and thus, the spare) are 13″. Profanity ensued. Luckily, right around this time a member of the Metro Freeway Service Patrol showed up. Arguably the best thing to happen to LA since the catalytic converter, the Metro Freeway Service Patrol cruises LA’s freeways helping stranded motorists, free of charge. They do a great job of keeping the roadways clear and preventing people from pulling stupid stunts like pushing their cars in traffic. In my case, they jacked up the right-rear of my car so I could put the spare on the rear (where it still fit over the drum brake) and then swap the rear wheel to the front. Victory! …and I was only 30 minutes late for a meeting.
Unfortunately, that wouldn’t be the only time a Falcon Mishap left me tardy for Change Control Board meetings. A couple of months later, while pulling away from a stop sign a quarter mile from my office, my clutch take-up was interrupted by a loud BANG! followed by a clutch pedal stuck halfway down. No amount of pressing could get the car free from first gear, so I quickly pulled into the nearest parking lot and used the brakes to stall it in a parking space. 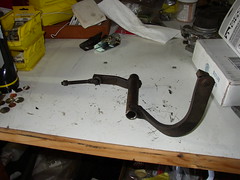 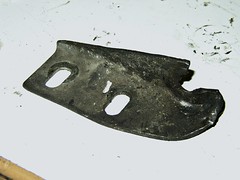 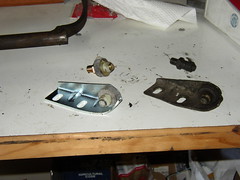 Old Falcons use what’s called a “Z-bar” linkage to actuate the clutch. It’s basically a rod that runs horizontally across the car, with one arm attached to the clutch pedal push rod and the other pushing on the clutch fork. In my case, the frame-side mount for the bar had failed, rendering the pivoting linkage useless.
Of course, now I was now stranded down the street from my office, taking up a spot in some random company’s lot. Luckily the car wasn’t towed or otherwise harmed over night, and I rented a tow dolly from some dude on craigslist to get it home. After pulling the driveshaft in the parking lot, I was on the road with my ’00 Wrangler towing 2700lbs of Falcon. While the dynamics of tow dollies are terrible, my lifted, short-wheelbase Wrangler did better than expected with its task, keeping up with truck-lane traffic at 55-60mph. 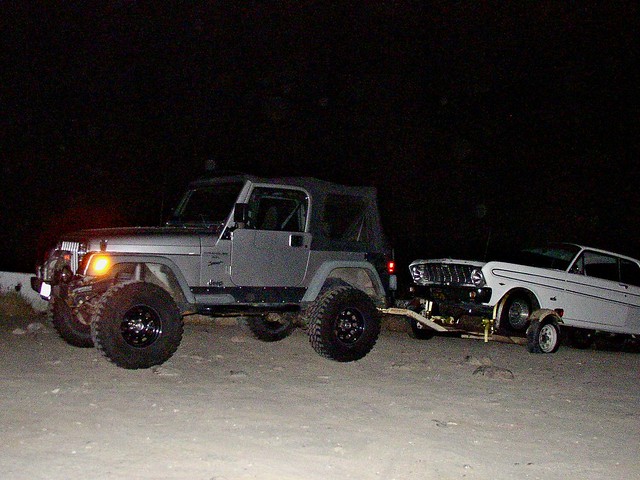 Things were cruising along just fine until about 2/3 of the way home when a new, loud noise developed. WhirrwhirrWHURRRRRRRRTHUMPTHUMPTHUMP…the dolly’s left tire was shot. The dolly had no spare and it was about 8:00pm on Friday night, meaning all the tire shops were closed. I called the dolly’s owner, who was out to dinner with his family, but managed to scramble to the local hardware store to and pick up a complete wheel + tire assembly and meet me at the bottom of an off ramp around 10:30. I spent the time eating the burrito The Missus brought and chatting with Rick, an unemployed mechanic who was living out of his car. He gave off a vibe that was both earnestly friendly and a little pathetic, with just a little bit of “could snap and kill you at any second” thrown in for good measure.
So after all this hassle, why even continue to bother with this aged, failure-prone POS? Why not get something more efficient, safer and air conditioned? Turns out there are some perks as well. For one, It took about as long to fix the busted clutch linkage as the round-trip to return the trailer (2 hours in each case). For as serious as it sounded and felt, the parts to completely rebuild the z-bar’s attachment points were only $45.
For more, tune in tomorrow.