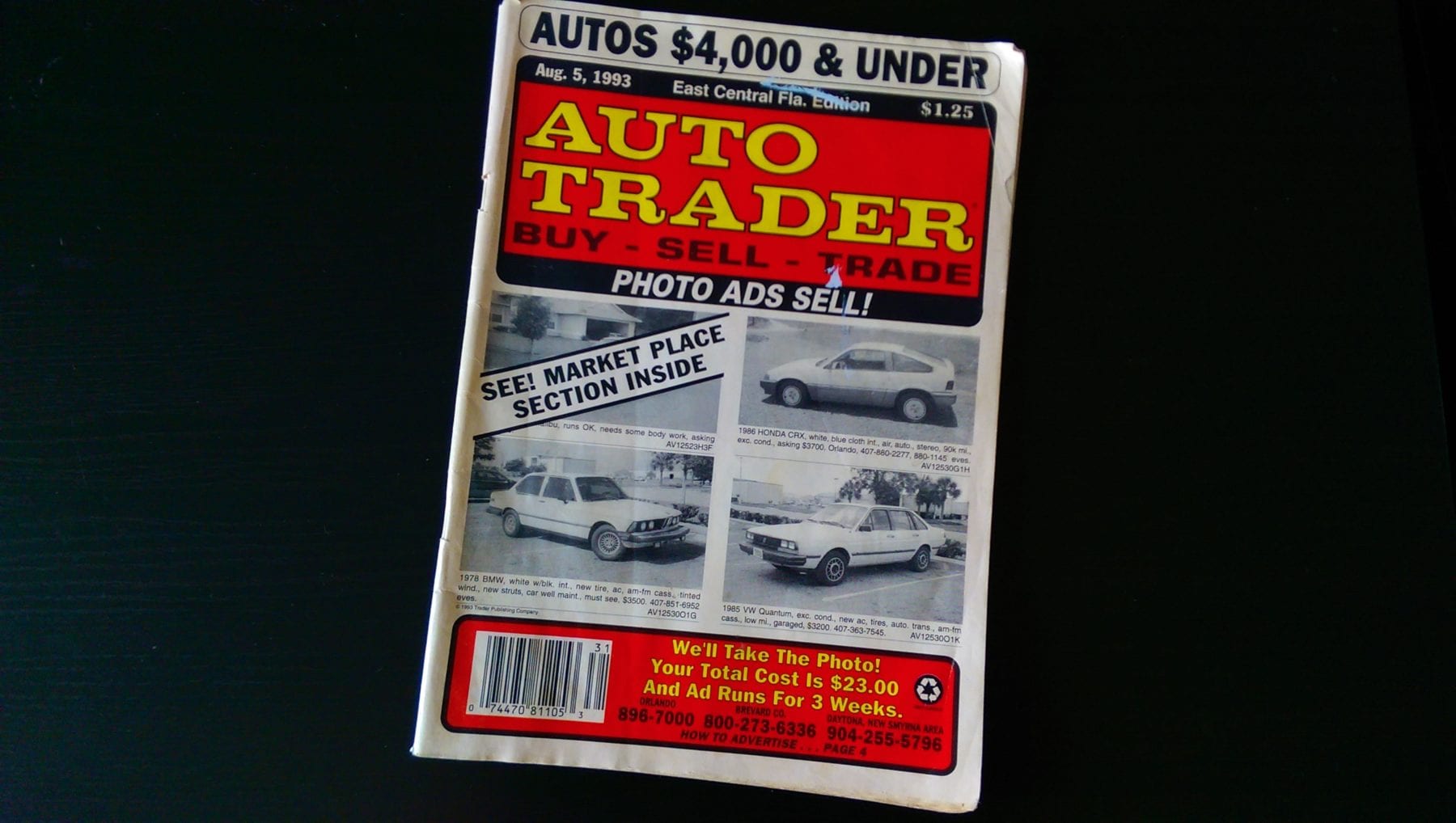 It’s one of life’s little pleasures, probably enjoyed less often now that everything happens in the virtual world (taking your laptop into the bathroom is a bit…. eww). I’m talking about spending a little time in the smallest room while idly flicking through a local Ads paper, daydreaming about snapping up one of the many bargains right there in your lap. Fun to do, even more entertaining when you’re in another country reading about cars which are almost impossibly exotic to you, despite their low, low fiscal value. When I first visited the USA as a twelve year old my knowledge of American cars up to then was based solely on the rare occasions that Car magazine tested something from the other side of the Atlantic, or perhaps when I’ve found a copy of Car and Driver during a visit to one of my the local USAF bases. As soon as our Delta L1011 touched down at Orlando International I realised that I actually recognised precious few of the cars I was surrounded by. I felt genuinely ashamed of myself. So, to resolve this, the first time my Dad stopped at Citgo to fuel our Alamo Lumina, I seized the chance to pick up the local Autotrader and start putting names to the shapes. Twenty four years later, let’s take a look back at the rich variety of machinery I feasted my eyes upon that exciting evening in August ’93. 4000 US Dollars in August 1993 translated to 2715 Great British Pounds. As the evening progessed my Father became increasingly exasperated as I showed him endless ways he could spend his money and told him about why importing an American car would be such a great idea. Below are what I remember as being my highlights, together with my recollected thought process as I leafed through the ‘paper.

These adverts were extremely educational to me. I was able to extrapolate a lot of facts through association. I already knew that 454 meant 7.4 litres in new money, so this Nova had a big, proper V8. And here were the magic words “very fast”, which I assumed were the product of all the cool sounding Muncie, 12 bolt, 411 posi stuff also mentioned. $3600? Much as I liked the idea of a Rat Motor, I had no idea where that stood as a value proposition.

This was the kind of machine I was looking forward to seeing in the US. I knew that land yachts like these existed as I’d seen them in films. But they only existed in two-dimensions and therefore might as well have been a figment of my imagination. But here they were. Big and floaty; they wobbled and swayed along the Turnpike in exactly the way I imagined they might. $2900? Why wasn’t every kid driving one? After a couple of days in FLA I soon realised the answer to that.

Like New! $1495 was like £1061, and that number of quid would buy you a pretty meagre amount of car back in ’93 England. And this Elite (which I soon learnt was a BIIIG Ford Coupe with snazzy little windows in the “C” Pillars which were freakin’ awesome), looked like a whole lot of mild steel real estate. 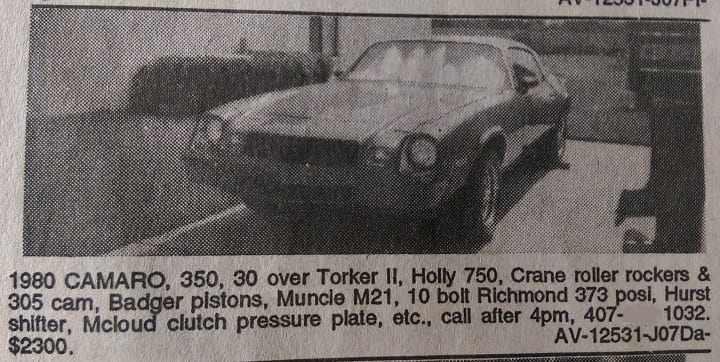 I knew this one. I knew that Camaros and Firebirds were cousins, and I also recognised that this advert listed a whole mess of stuff which presumably made the car faster or something. 350 meant 5.7, and there’s that Muncie again, whatever that is. Posi? Positraction? Oh, like the rear differential perhaps? 373? Axle Ratio? AHA! This seemed like a pretty tasty list for $2300. 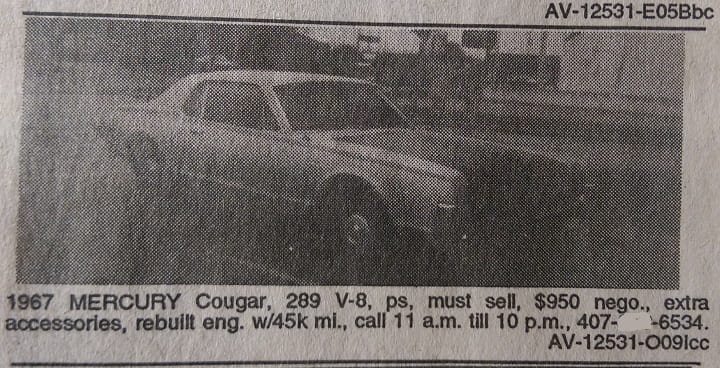 1967? That was when Muscle Cars were being built, wasn’t it? Ah! Mercury Cougar. There was one of those in On Her Majesty’s Secret Service. V8, too, but only a 4.7 this time. And some mysterious “Extra Accessories”. Air freshener? Fluffy dice? Pink velour and ankle straps in the ceiling? Who knew? Hell, at $950, who cared?

Impala, another name I recognised, and 350, one of the more famous engine sizes. 300hp was useful to know and confirmed that 4bbl was definitely what you needed. In fact… more extrapolation…. Q-Jet? Jet, like Carburettor jet? 4bbl, four barrel? Four jet? Quadrajet! This publication was a bloody brilliant educational tool. “Great for restoration”. Bummer. Sounds like hard work. NEXT!

455? That’s a BIG number! And by God that’s a nice looking car and seems to have a nice long list of positive attributes to celebrate, providing “runs/drives exc” means “Excellent” or “Exceptional” and not “Execrable”. Rare antique? $2350? I’m sold.

Whoa, XR-7? Fords in England only went up to XR-4, so this thing was three more. $2000 seems VALU, even if it’s got light hail damage. Every bloody car around here seems to have light hail damage anyway, including the Lumina sitting on our driveway in Indian Wells right now.

I recognise this from my book about Muscle Cars, I distinctly remember reading about an SS396 and how great they were. So why the hell is there one in a “Cars under $4000” publication? Oh, what’s this, “Not matching nos”. Chicanery and skullduggery? Is this like one of those Sierra Cosworths which turn out to be a 1.6 L with a bodykit? Hmm, interesting moral dilemma. What about a Cosworth replica made out of genuine Cosworth components, with a genuine Cosworth engine? What if this SS396 turned out to be every bit as good as a genuine SS396? I just don’t know! $3900…. do you feel lucky? Well do ya, Punk?

Why is everyone moving? Also, why did they call this the Fairlane 500 when it never had an 8.2? Loads of new stuff mentioned here and the poor bugger’s actually volunteering to be $3400 in the red just to move this thing on. Bite off more than he could chew? Federal sapena? Who knows. Three Grand. Nice looking car.

Muscle cars were one thing, but this was my understanding of the American Car. Lots of bonnet, lots of trunk, rear wheel spats, massive blindspots, A vinyl roof and lots of chrome. Though our 3.1 Lumina Euro in Medium Garnet Red was a pretty cool car (by my standards at the time…. oh, NEP81J, where are you now?) it was all a bit conventional, like a bigger, slightly weird version of what we have back home. The Cadillac DeVille was totally different to anything we ever did have, or ever would have. Only $2000, but only 90% completed. What made him stop? Reality check, ill health or laziness? Next time I visited in ’95 the magazine had changed to “Autos under $6000” and there were nowhere near as many interesting cars among the blurry, indistinct listings, but I still bought a copy. It served me well and taught me that, to quickly learn about the motoring landscape of a new and strange place, you need a copy of the local “cars for sale” rag. (All images taken from AutoTrader East Central Florida, Aug 05 1993. Copyright probably still belongs to Trader Publishing Company, but if it’s lapsed I’ll probably claim it for my own)