24 Hours of LeMons at Thunderhill: The Ranchero rides again

Well, not that Ranchero. This is Ranchero 2.0, and it’s much better than the other 1962 Ford car-truck that it replaces. And it was my race car for a recent weekend of adventure in Northern California.

Tim (Mad_Science) Odell has been hard at work transforming a second old shitty Ranchero into a racing machine. This time around, the three-on-the-tree transmission is gone. Four forward gears are in play, and they’re selectable via a toploader that backs up the 250 cubic-inch straight six. Sitting to the sides of that engine are a well sorted front suspension system. Coming off from that front axle is a collapsible steering column, as mandated in the rules.

Also mandated in the rule now is a fire-suppression system. And we’ve got one of those too. Yet it still feels nerve wracking the first time you strap yourself back into such a machine. I have confidence in Tim’s roll cage-building ability. The harnesses haven’t met their expiration date just yet. My helmet and racing suit are in great shape. But anxiety and a bit of fear creep in when you fire up that engine, realize you’re strapped in pretty damn tightly, and your head restraint makes it so you can see just as much as you need to but not a bit more.

Let’s get this show started

I roll out to the start line. This part of Thunderhill is one of which I am familiar. It’s the east portion of the circuit. We’re not just running the east portion, however, as this event unfolds over all five miles of Thunderhill Raceway. So I’m driving it in a vehicle I’ve not driven prior, which is why the team decides I should hop in first. That way I can use the parade lap to familiarize myself with the Ranchero and the rest of the track. Oh, and I need to bed the brake pads in as well.

The meandering first-lap stroll around all five miles is the perfect place to drag some brakes and get the car completely situated. It’s not hot out yet. The sky is overcast. And I’m near the front of the initial starting pack as I make my way back towards the start/finish. Sitting in position three, I see the green flag wave and immediately floor it. I catch the driver of the North Korea-themed Hyundai Elantra napping and swing past before we hit Turn One. From there, I try to stay on the bumper of a Volkswagen Golf but he’s starting to pull on me. And the rest of the pack that was once behind me is maneuvering their far faster machines around me at every available instance of open track.

Which way does the second half of the track go, again? 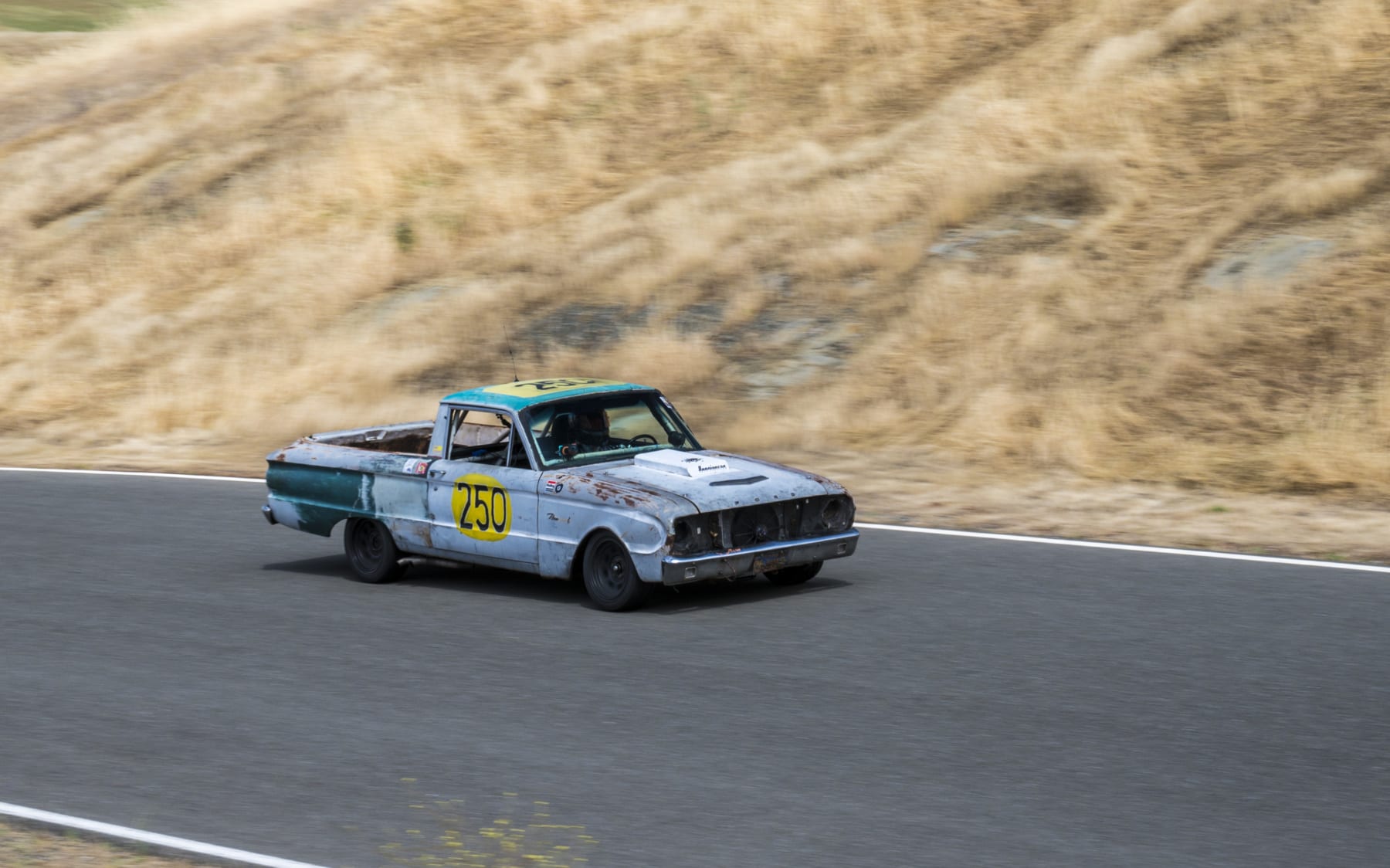 I remember that the west circuit has an uphill transition followed by a sharp left turn. Well, I remembered it when I go straight off. Waiting for traffic to clear, I rejoin the paved portion of the racing surface and find nary a black flag in sight. It seems a corner worker was napping just as I was.

But it’s back to racing. That anxiety and fear I mentioned earlier begins to fade. Once I focus on finding the line, keeping an eye on my mirror for faster traffic, and making sure the car is in one piece, it all combines to put a big smile on my face. This Ranchero is far better than the one it replaces.

Tim fully understands Falcon-based front suspension setups. The rear is great too, as Tim swapped in the limited-slip differential from his daily-driver ’64 Falcon. Turn the tiller and the nose responds. Step on those freshly bedded pads and the Ranchero brakes smoothly. It’s a great package… until it starts stuttering coming out of corners. As I try to put power down from a turn, the engine fights its way to life. It’s not breathing well. 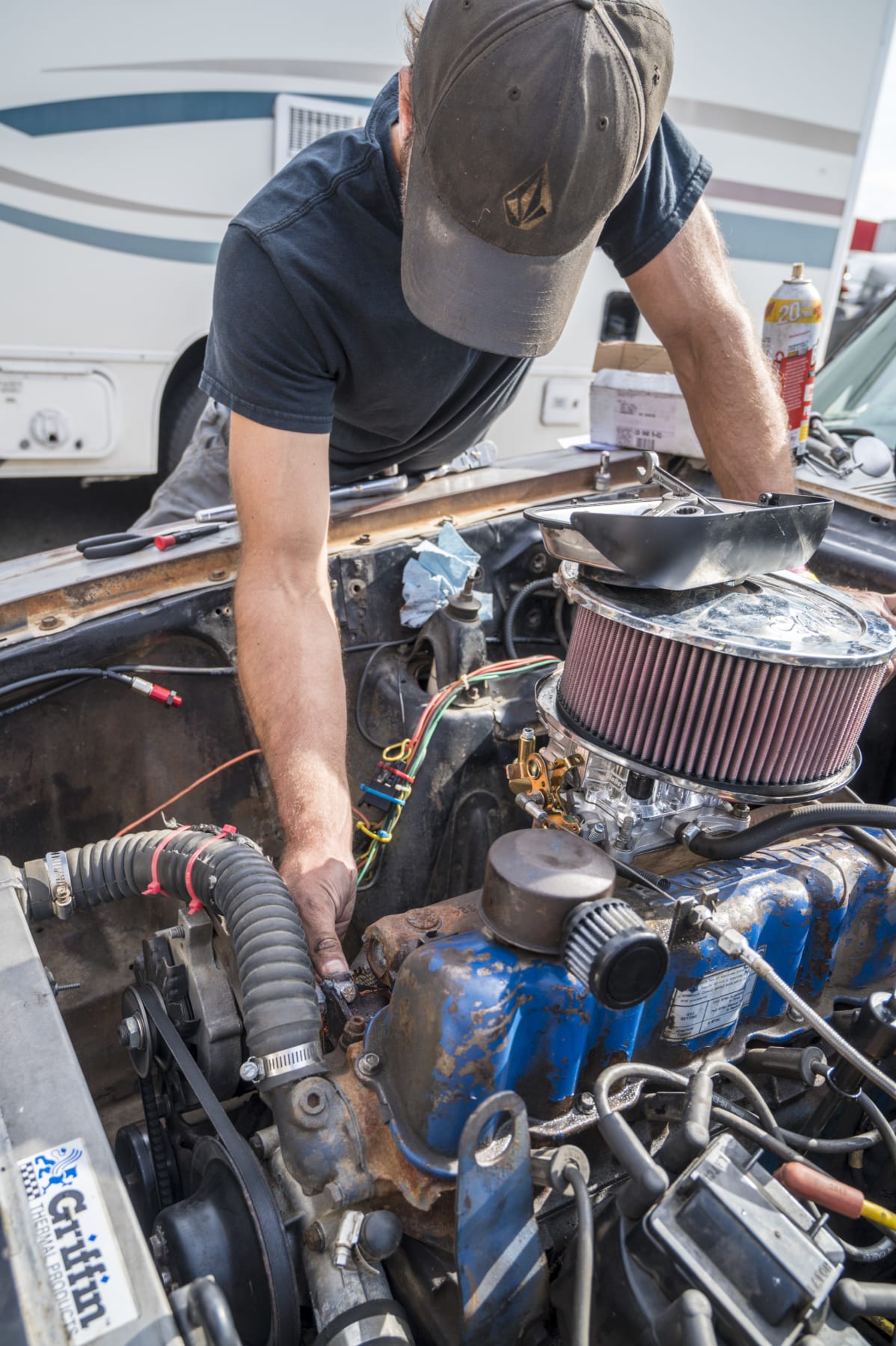 The air-fuel mixture is off and this thing is getting choked out on its gas delivery. I pull into the pits, radioing ahead to let Tim know, and he’s already grabbed a different set of jets for the carburetor. He swaps them, fiddles around a bit, and sends me back out. The Ranchero is breathing a bit easier and I go from getting passed by everyone to making passes on a third of the field. It’s still a bit off, but it’s getting more air to help keep on trucking along.

My two hours is up. It went by fast, and I feel like I could spend more time in the car. But this is about getting everyone in the seat. Driver two heads off for a relatively uneventful run, albeit still complaining of the same issue I had prior. He finishes his two hours and hands the car off to driver three. Things are going well until we hear the dreaded radio call “The engine is making terrible noise, I’m coming in!”

So which gasket is it?

We figured out why the car was running a bit rough. @tim_with_the_cars swapped the head gasket on the Ranchero in two hours.

Puffing into the pits, Tim pulled the pins on the hood and went to work assessing the damage. Putting his hand near the hot headers, he discovered the exhaust manifold gasket was leaking. We didn’t bring a spare. Tim and I hopped into one of our non racing vehicles and headed for nearby Willows, California. The O’Reilly Auto Parts informed us they too did not have the correct gasket… but their shop in Chico did. It’s 45 minutes there and another 45 to get back to the track, but we’ve got the part we need.

Or the one we think we need.

Tim installs the gasket, fires up the engine, and it’s making the same exact noise. That’s because we actually blew the head gasket. We’ve got a spare one of those, and Tim swaps out the trashed old one for a new one in about two hours. But our racing is done for the day.

Arriving at the track, I’m greeted to Tim and the rest of the team standing around the Ranchero with its hood off. We fire up the car and it’s great. All signs point to a full day of racing. Driver four hops in and heads to the starting line. He’s running well as the track begins to dry from an overnight rain storm. In fact, each lap is faster than the one before it. Until he gets punted from a wayward Subaru. 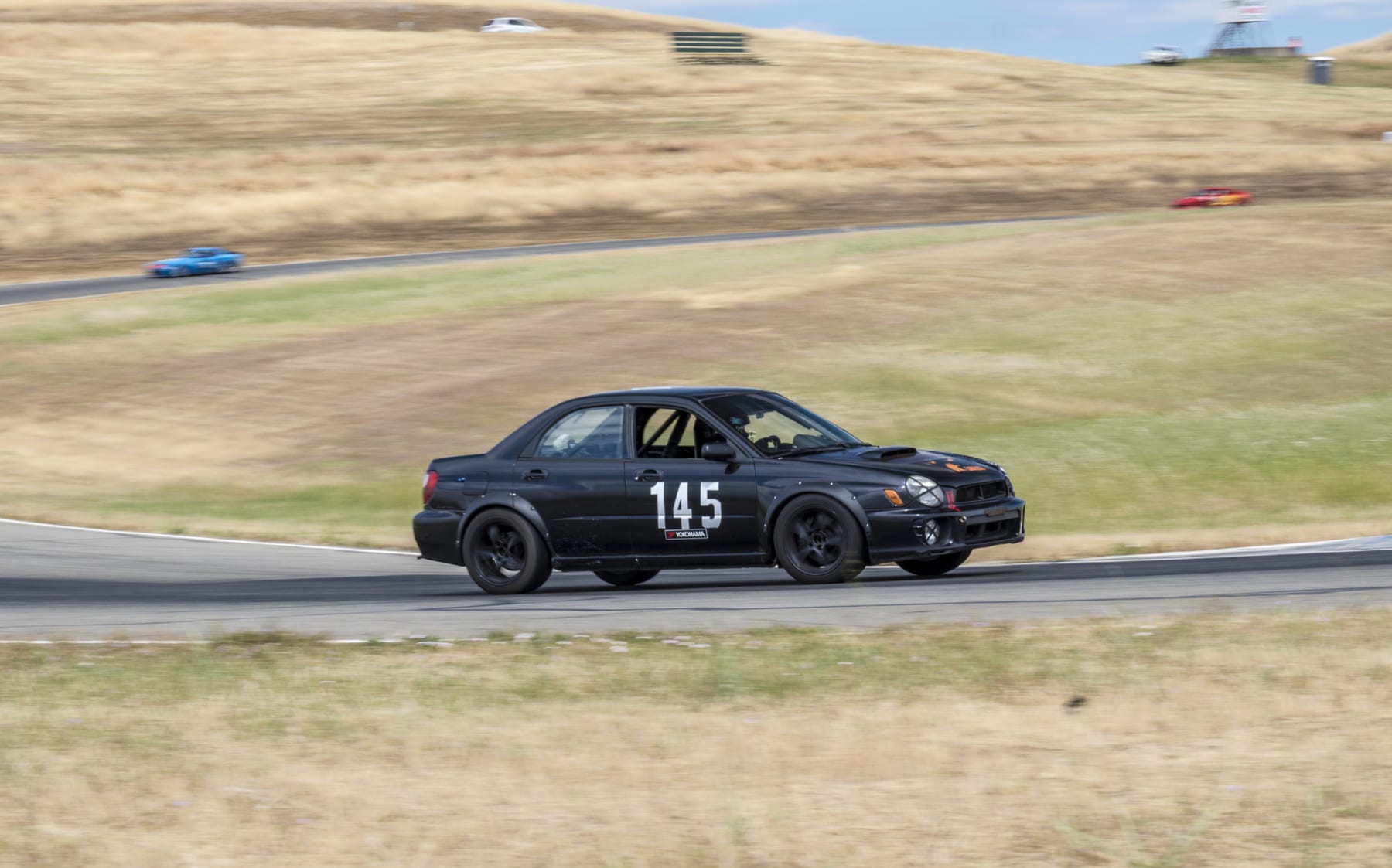 When not hitting us, this car was fast out there

The driver of the Subaru, who would later come over, claim responsibility, and apologize, was cresting the main hill behind our Ranchero. He was coming in hot, locked up his brakes, and slid right into our driver’s side rear wheel. The body work was pushing on the tire, so our Ranchero had to be towed off the course. Some quick work was made bending the panel back a bit so it wouldn’t rub, and we sent driver four back out.

Maybe it’s not quite fixed…

Driver four returned and Tim hopped into the car. He was the final driver before we might do another go around. He set off on the course, and appeared to be running well. Eventually, however, he came in complaining that he couldn’t get the shift lever into third gear. Our man Jeff Frasca crawled under the Ranchero and we discovered that the linkage was fine… third just wasn’t happening anymore.

We decided that Tim should head back out. The course can be run mostly in fourth in our car, with just two to three tight turns that require dropping down into second. Tim was doing that when the transmission had enough. It locked up while in fourth gear, sending Tim into a spin. He didn’t hit anything, but the truck once again came in being hauled by a tow truck. This was enough to call it a weekend.

The good news is that all five drivers got nearly full stints in the car. The bad news is that we didn’t drive in under a checkered flag, but we did drive the truck onto the trailer. That’s a lot better than pushing it on.

Expected to see nothing but shrapnel based on how things went down on Sunday, but only saw a little glitter in the oil and found the 3rd gear synchro blocker ring cracked. It's currently locked in 3rd gear, but you can still shift into any other gear…but then it locks up because it's in 2 gears at once. Bases on the grinding I was hearing and the 3rd gear synchro dying it seems like the linkage was messed up and partially trying to engage 3rd despite being in another gear…? Dunno. Looks like I'll be replacing the 3-4 dog and synchros and stuff. Not too bad, actually. . . . . . #toploader #ranchero #fordranchero #falcon #fordfalcon #lemonsworld #24hoursoflemons #hooniverse #fordtoploader

Tim got the Ranchero home and set out to find what happened to our gearbox. We believe that the car may have been in third gear when it was hit by the Subaru. And this lead to its declining capability. The good noise here though, is that the gears themselves are fine. A synchro ring cracked, so the transmission was trying to use two gears at once. Everything in there is easily replaceable.

Which means Ranchero 2.0 lives to fight another day… well, once Tim puts that transmission back together.

[Some photos graciously provided by the fine folks at the 24 Hours of LeMons. Thanks!]