The Mazda MX-5 Miata is just about synonymous with the automotive enthusiast. The Top Gear/Grand Tour blokes claim that you have to have owned an Alfa Romeo to be a true petrolhead. Here in the states, it’s the Miata. Before we get too much further, yes I’ve owned a couple (NB and NC), and I’ve driven just about every version that has been on sale here. So, while I’m no Miata expert, I’ve got a general sense of the ubiquitous little Japanese roadster. So when Mazda tossed me the keys to a 2021 MX-5 Miata Grand Touring for a week, I wasn’t sure what else to say about it. However, that got me thinking, how do you look at the present to look into the future? What’s next for the Miata? 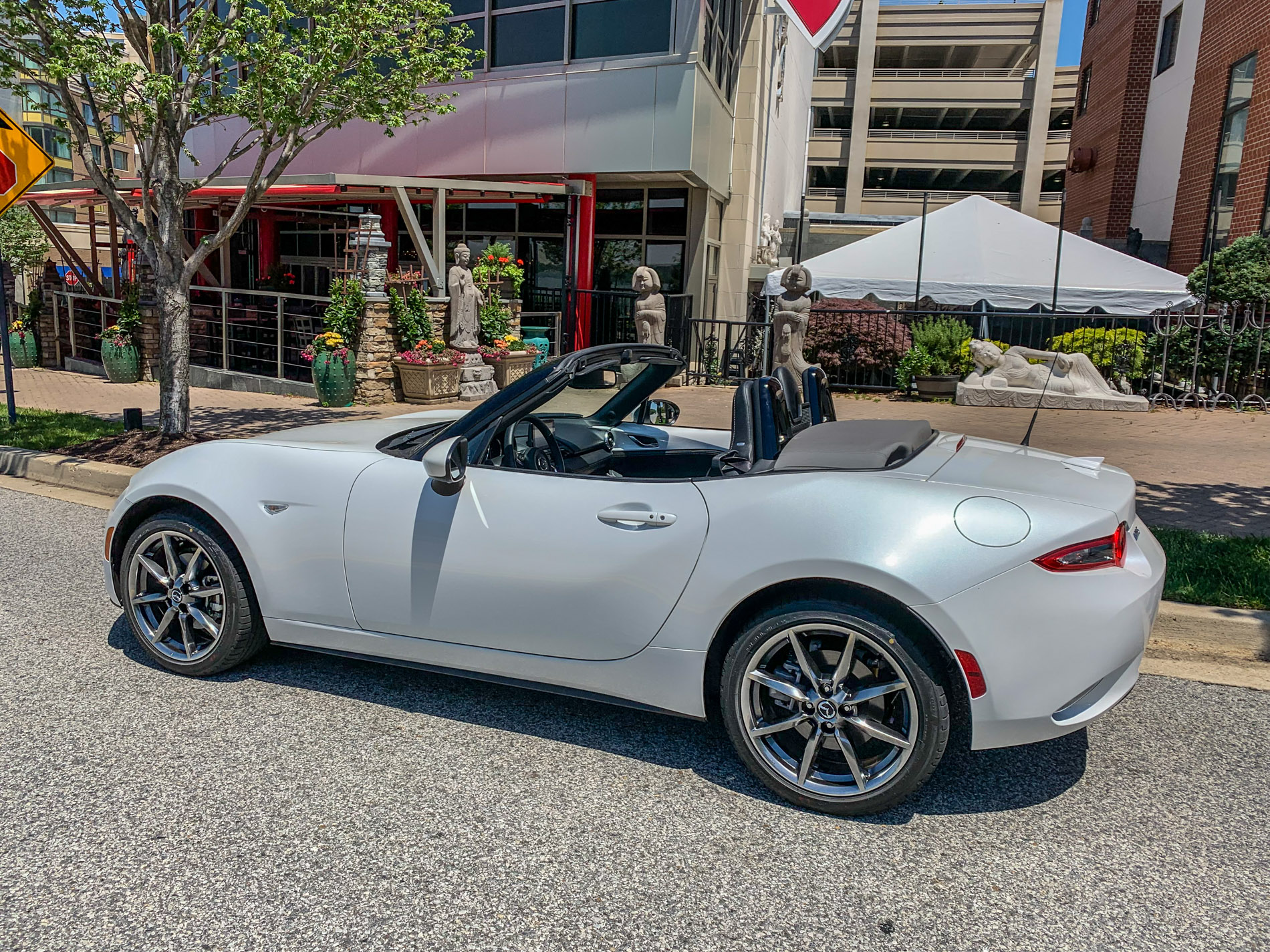 I’m sure you are all familiar with the lineage of the Miata, but I always like to start with a little history lesson. The generational “N” nomenclature is pretty well known among the car crowd, and thankfully it’s pretty simple. The first generation is “NA”, second “NB”, third “NC”, and fourth (and most recent) is naturally “ND”. We’ve had the Miata around since the late 1980s so we’ve had a lot of time to get to know it. The pop-up headlight first generation gave way to the fixed light second, and so on. Many rag on the NC, as it was seen to get a bit heavier and less Miata-like, but having driven several, and owned one, it’s still good fun. I recall going to the local DC debut of the ND and being pretty blown away. There were a lot of flowery statements about getting back to the roots of the original NA, and once I drove it, I was a believer. 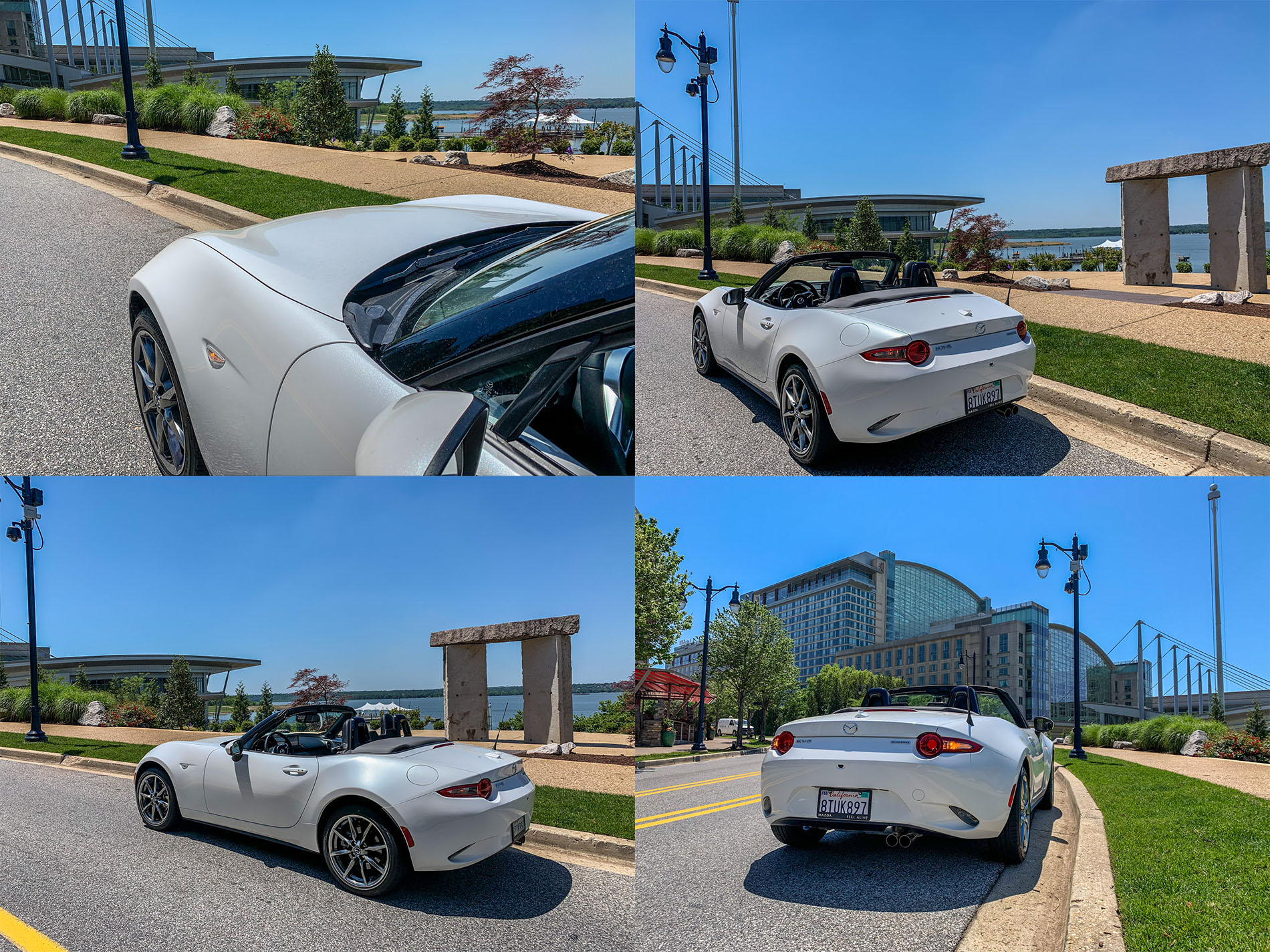 Jinba Ittai is the Japanese term that basically means “rider and horse (jinba) as one body (ittai)” and it’s been the mantra of the Miata since its inception. The core design elements that go into every MX-5 have to do with compact packaging and lightness, no wasted space, front engine and rear-wheel drive with 50/50 weight distribution, tuned suspension, and sharp engine response. That formula had brought us here to this 2021 MX-5. Let’s see what’s what.

The MX-5 comes in a few flavors. The base model is the Sport, or you can ante up for the Club, or Grand Touring (GT). Our GT test car starts at $31,770 but the base Sport can be had for just $26,830. The real question for most buyers is, which trim would I want? The Miata is an elemental experience, so even the most comfortable version is still far less comfy than your average passenger sedan. Don’t get me wrong, it’s continued to improve over the years from a creature comfort perspective, but don’t expect owning a Grand Touring to be like driving a luxury car. It’s still a small cabin, and while the features and tech have improved, it’s a similar experience to previous generations.

So, whether or not you think the extra bunch of kit you get in the Grand Touring is worth $5,000 is up to you. Regardless, you’ll get the same 181-hp, SKYACTIV-G 2.0L DOHC 16-valve 4-cylinder engine in each trim level. They all get the same mpg rating (26/34 with the manual and 26/35 with the auto) as well. Bumping up to the Club or Grand Sport will give you the torque-sensing limited-slip differential, which is pretty clutch. All trim levels get blind-spot monitoring and lane departure warning, the latter you will likely turn off whenever possible so it stops beeping at you. 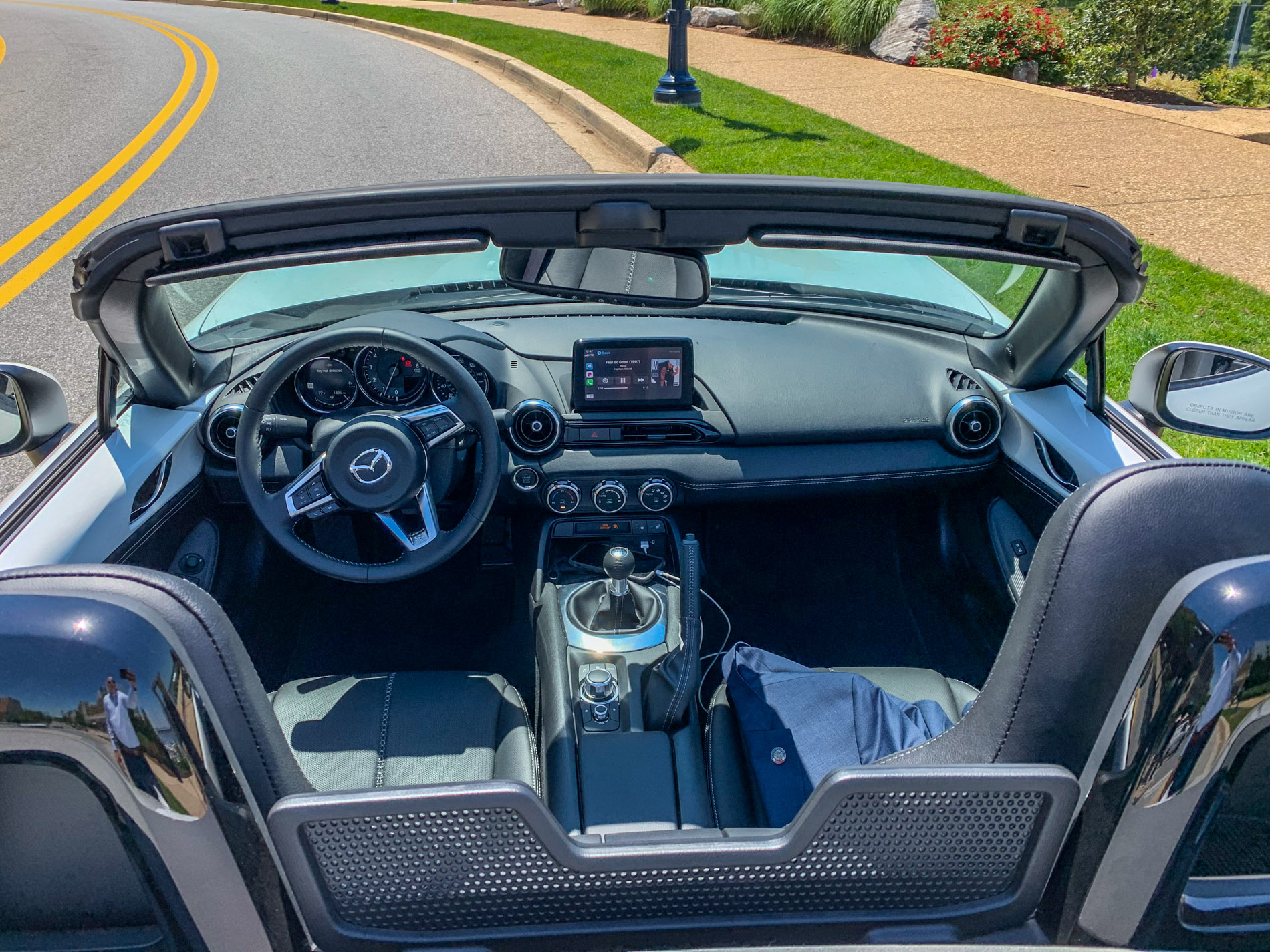 On the inside, you still get Android Auto and Apple CarPlay across all trim levels but all trims share the same seven-inch touchscreen. The big ramp-ups from a feature and options perspective are automatic climate control (GT), auto-dimming rearview mirror (GT), and leather interior (GT). There are some small packaging differences here and there, the Club is clearly the sportiest of the three, with the GT being the most well-appointed. Honestly, you can’t go wrong with either trim level, depending on what you want it for. The Sport is the most cost-effective route to (new) Miata ownership, the Club would be the autocross or track day choice, and the GT is your daily driver.

That brings me to the big question, what’s the “NE” Miata going to be like? Will it get electric power, will it ride on a new platform? What’s coming? Well, here’s my best guess.

As much as I’d like to see an all-electric Miata, it’s not happening in the short term. All those “The Miata is going electric” headlines you’ve seen are a bit off, at least that’s my prediction. Mazda has stated that they will go all-electric by 2030. However, it’s likely that the current EV packaging and weight issues won’t exactly align with that Jinba Ittai design philosophy. However, as you see changes in battery tech and it becomes possible to get a lighter base to build off of (the “skateboard” as the kids call it) then you’ll see some great applications for small performance cars. Until then it’s likely that you’ll see the SKYACTIV-X powertrain in the next NE Miata, likely around 2023-2025 or so. It has been called the “holy grail” engine by some of our exuberant media colleagues, and it does look pretty impressive. Mazda has invested a ton of ¥ (yen) into the new X powertrain. They claim it will bump power by 30% over the SKYACTIV-G found in this Miata, plus it’ll also increase fuel efficiency by up the same percentage. All while reducing emissions.

There is already a version that also uses a mild hybrid setup, basically adding a 24-volt electric motor to supplement the SKYACTIV-X gas-powered engine that puts out 188 horsepower. So, depending on packaging (only transverse mount for now) and weight, it’s a great contender for the NE Miata. There are few things that resonate as music to enthusiast’s ears as “new RWD platform”. However, while the Mazda 6 and Mazda CX-5 are likely going to ride on a new Mazda RWD setup, it’s likely not going to be found under the NE Miata. There are a handful of reasons, primarily due to the complexity needed to ensure that platform can hold AWD and hybrid/electric components. Not Jinba Ittai ready either.

So, that means that the NE Miata is likely to be an evolution from a platform perspective. Not necessarily a bad thing, since the ND is a blast to drive. The design will likely be evolutionary as well, it will be immediately recognizable as a Miata but will likely integrate some of Mazda’s recent (and achingly beautiful) design language. We saw it in the “Kai Concept” and it’s showing up already in the latest Mazda3 and others. Regardless, it sounds like the MX-5 Miata will remain in the Mazda lineup for some time, and that’s a great thing! 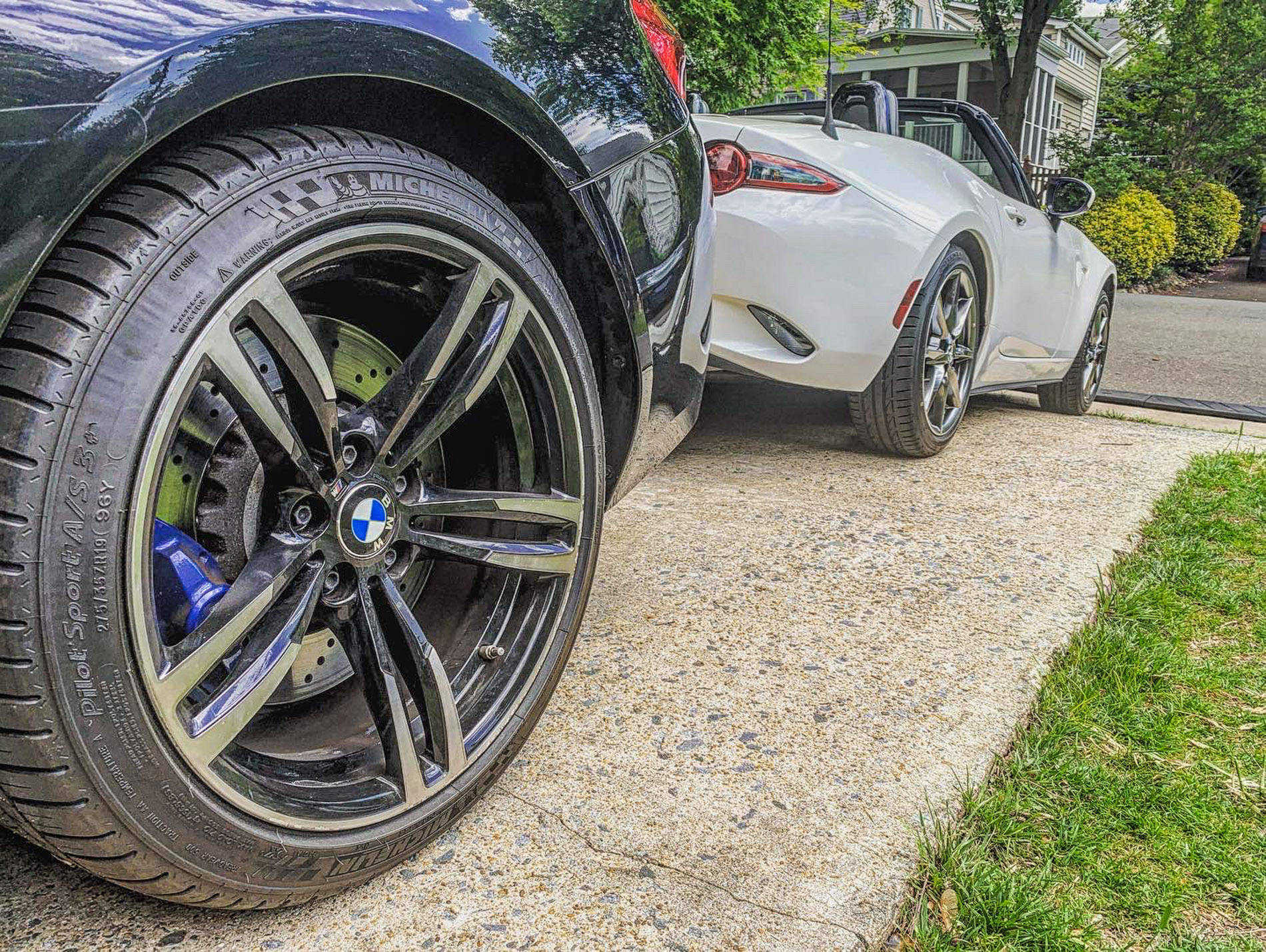 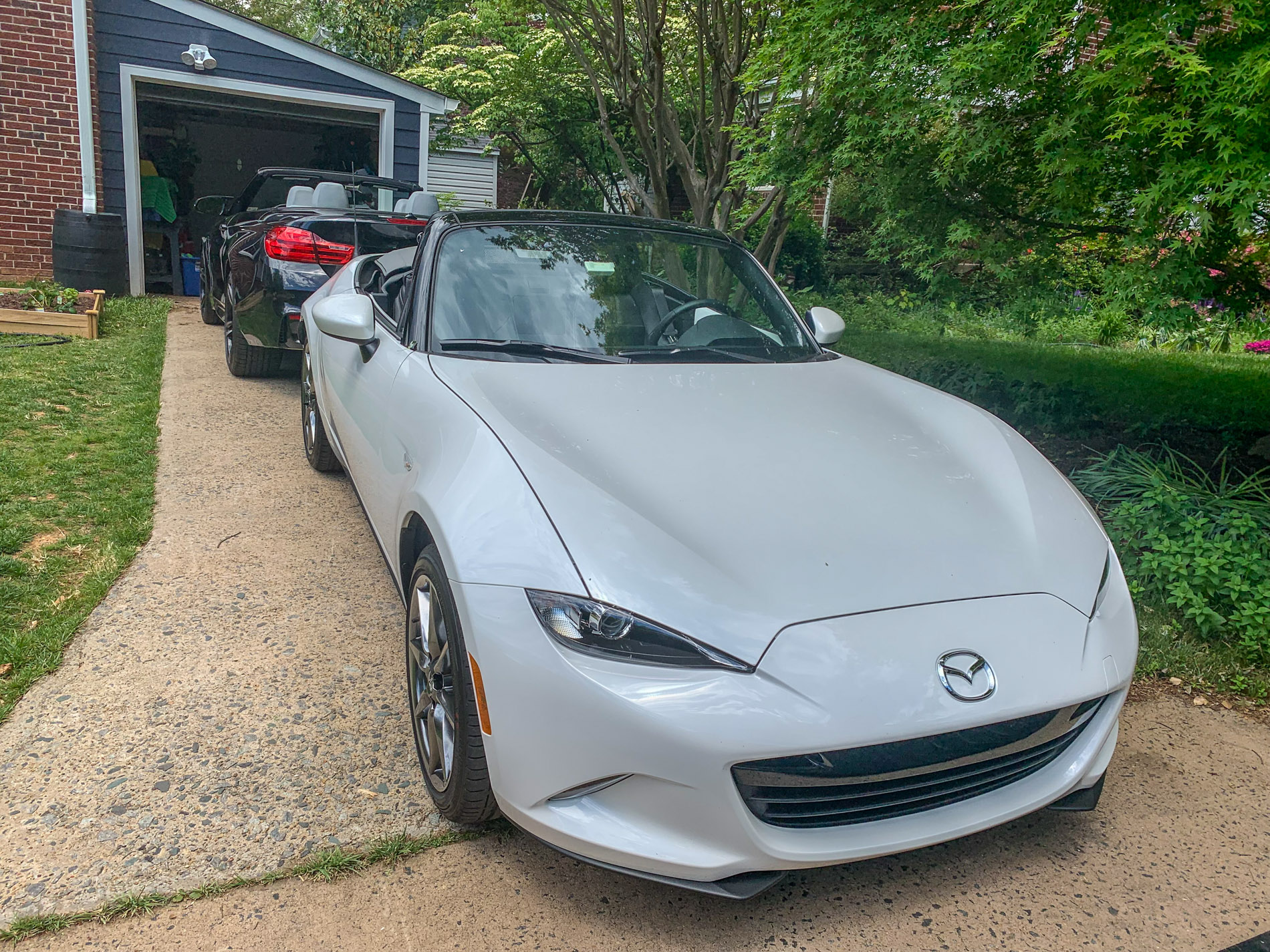 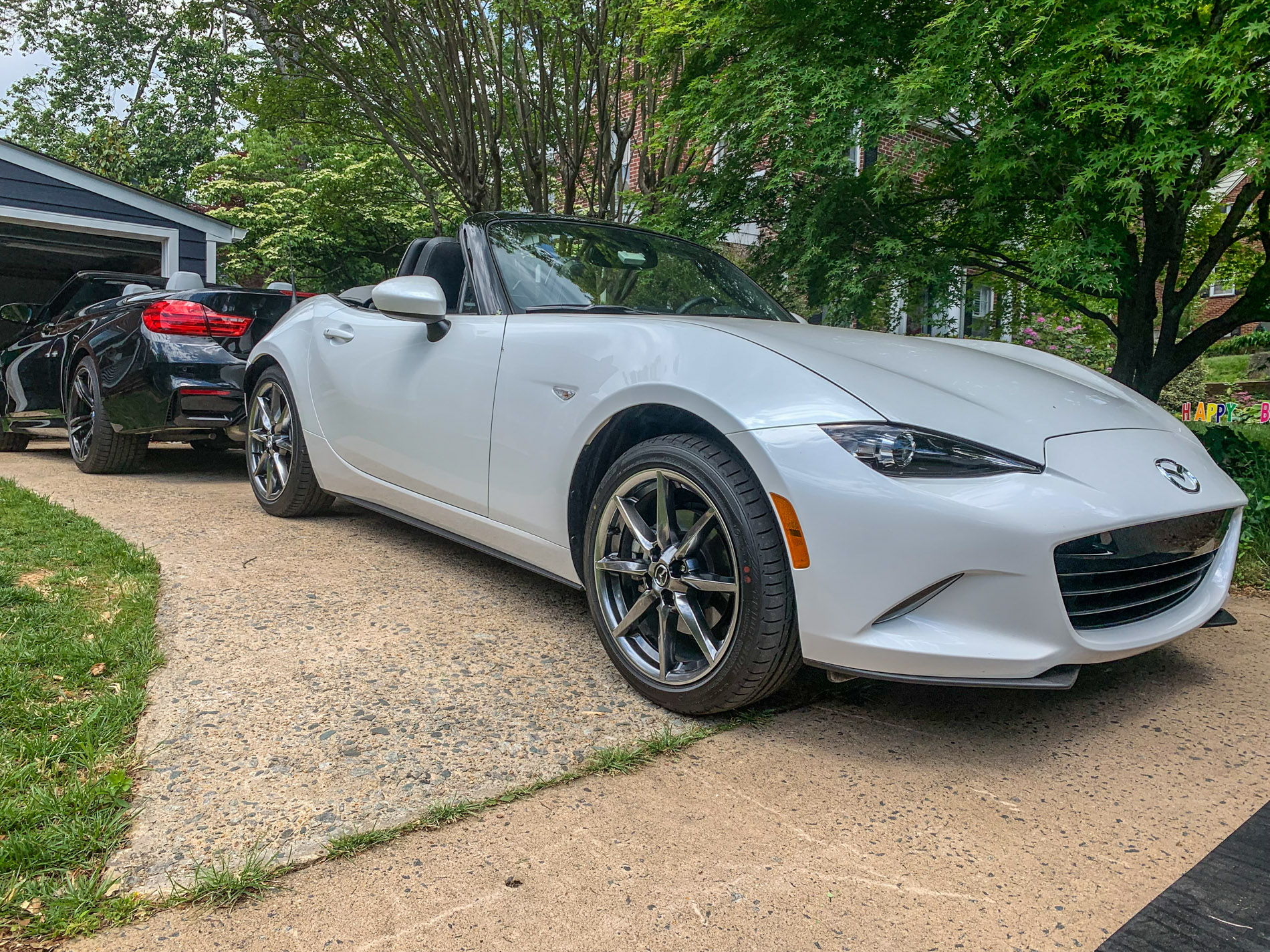